I don’t know why I just bought this car; I truly, truly don’t. I just sold my dream Jeep XJ on Sunday as part of a plan to reduce my fleet of cars to something that A: Might let me move to Los Angeles (to do work stuff) and B: Might afford me some amount of social life that isn’t just wrenching at junkyards. And yet, even though I’ve had a strict “No Buying Cars” policy in place for months, this morning I took ownership of a 2000 Chevy Tracker 4×4 five-speed. And while the machine is deeply, deeply flawed, it was also the deal of the century, so maybe it wasn’t a bad call. Just hear me out.

Technically the asking price was $1,600, and my plan was to try to snag it for about $1,200 to $1,400 if the body was as rust-free as the listing indicated. “It’s a 2000 Chevrolet tracker It’s been enough family since we move from Kansas It runs overheats little bit It’s a good car for the price” read the entire Facebook Marketplace listing.

I arrived at the seller’s home and met a kind Albanian man playing with his daughter at his sizable home, with a bunch of vehicles (presumably owned by his family members) out front, including the man’s big Chevy Silverado 2500 work-truck. He showed me to the Tracker. “It won’t start without a jump. I’ll be right back,” he said, before disappearing into his house, and returning with some jumper cables.

He hooked two sets of jumper cables to one another to get some extra length, and attached them to the Tracker’s battery on one end, and to his Pontiac Vibe’s battery  on the other. “Pop!” went a spark between the cable and the Vibe’s battery. The man headed to his car, and turned it on, then hopped into the Tracker. No crank, no relay clicking, nothing. I turned to the Vibe, and got nearer, only to see what I’d feared: The man had put the jumper cables on backwards, with black on red and red on black.

I corrected the issue, but it appeared the damage was done. No matter how long we waited, the little 4×4 wouldn’t crank. Nothing — I mean NOTHING — worked. No lights, no hazards, and definitely no starter motor. “Weird, it ran yesterday,” the man said. “Well, I think you may have fried something by reversing the jumper cable polarity. Normally when you hook a jumper cable to a car properly, you see a tiny spark, but I see nothing.” He suggested we wait for the battery to charge; he even pulled up his truck to us it.

“Man, this battery must be completely dead,” he guessed. “Well,” I responded. “We’re basically running this Tracker off your pickup’s battery. There should be some lighting or at least one or two signs of life. I think something’s fried. Maybe the engine computer, maybe some fuses.” I then started to look through some fuses underhood, but I wasn’t familiar with the Tracker, and gave up.

A few minutes later, the man gave up trying to start the thing, and I got ready to head back home. “I’ll let you know when I get it running,” he told me. “Sure,” I responded. “And if you want to sell it non-running, let me know.” 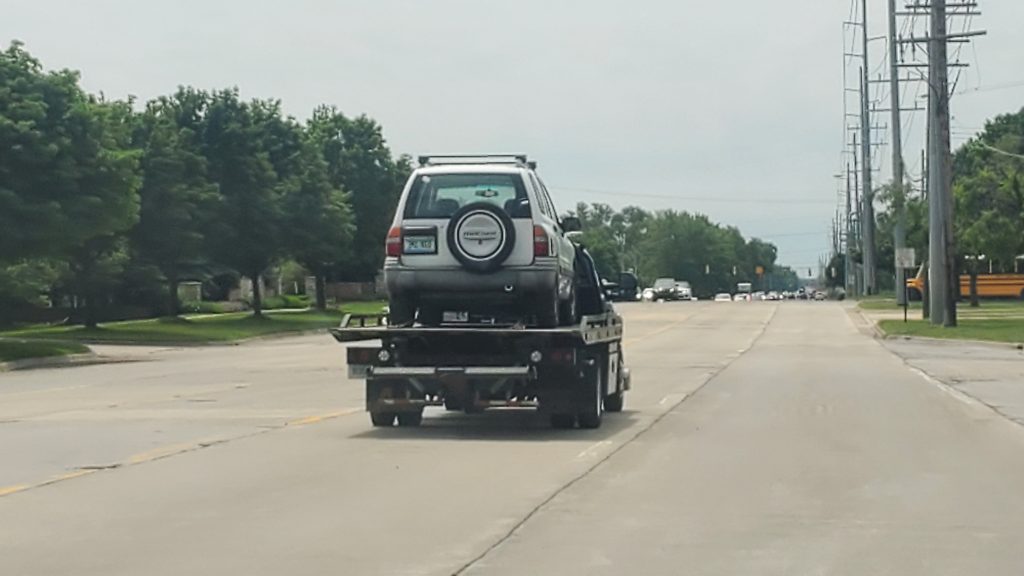 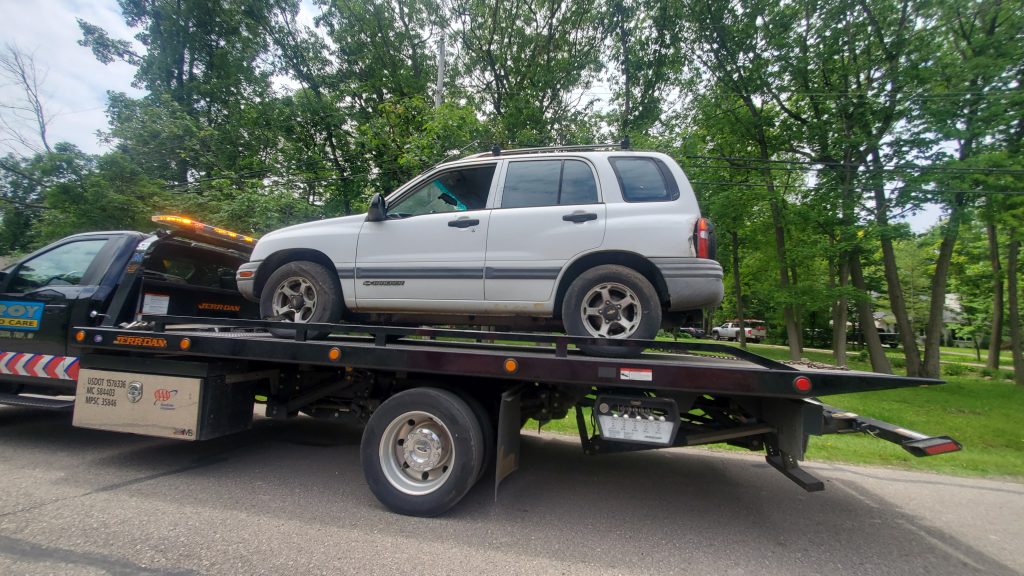 The following day, I had AAA tow the Tracker to my home, where it currently sits, dead. Completely dead. I haven’t done a full assessment of the vehicle’s health, but an initial assessment shows some mouse droppings (it smells like urine in the cabin) and some black and white growth on the carpet: 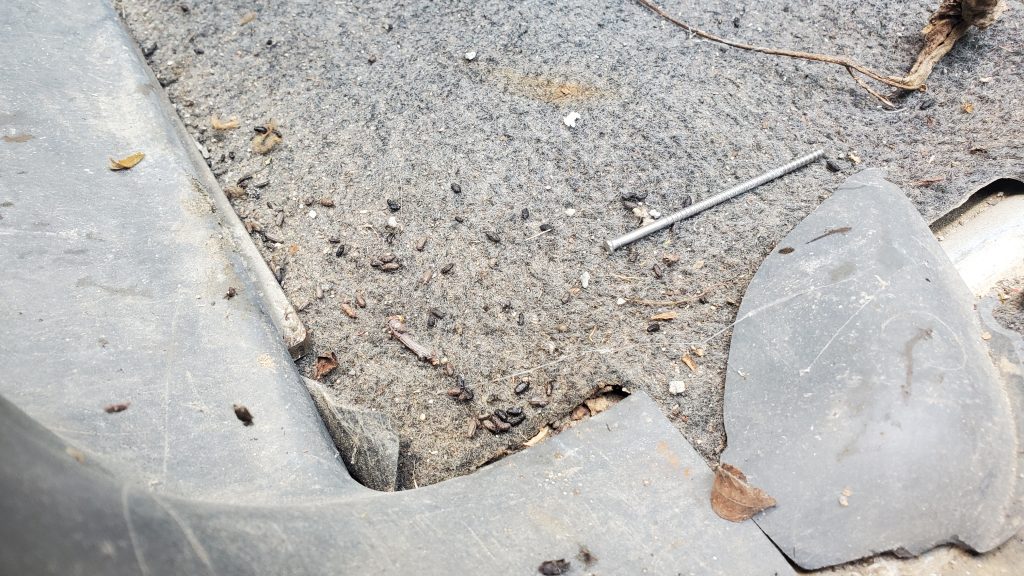 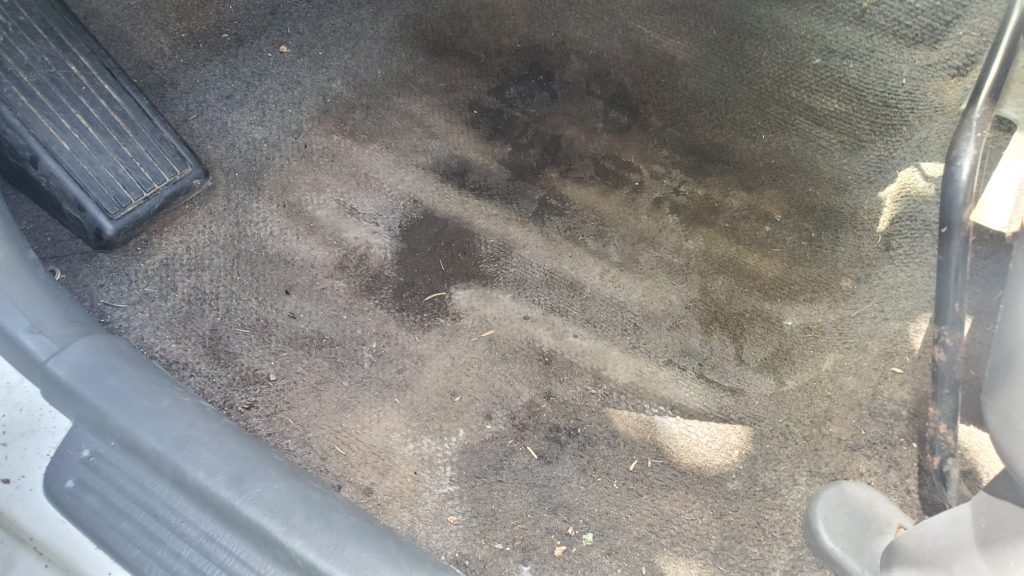 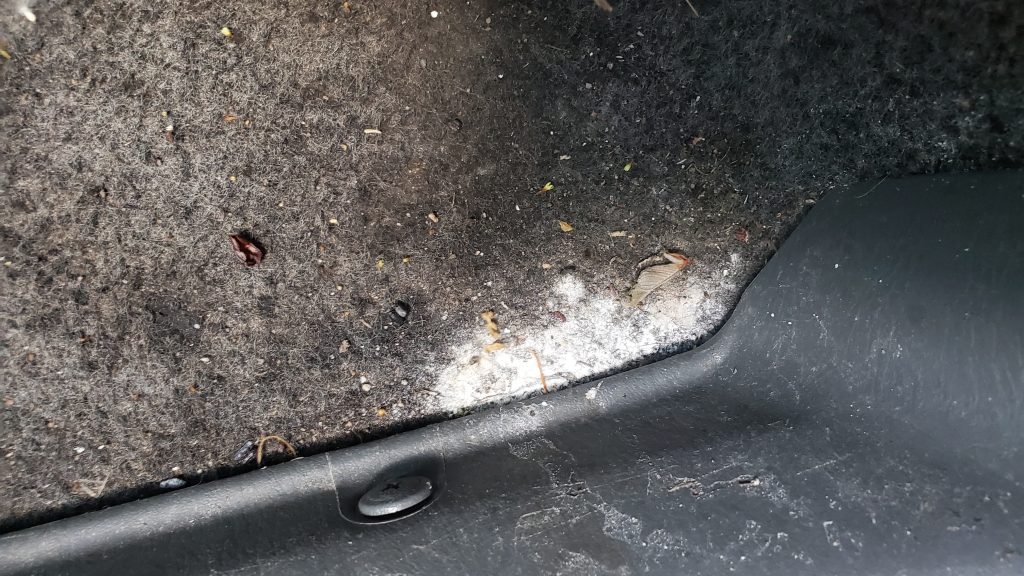 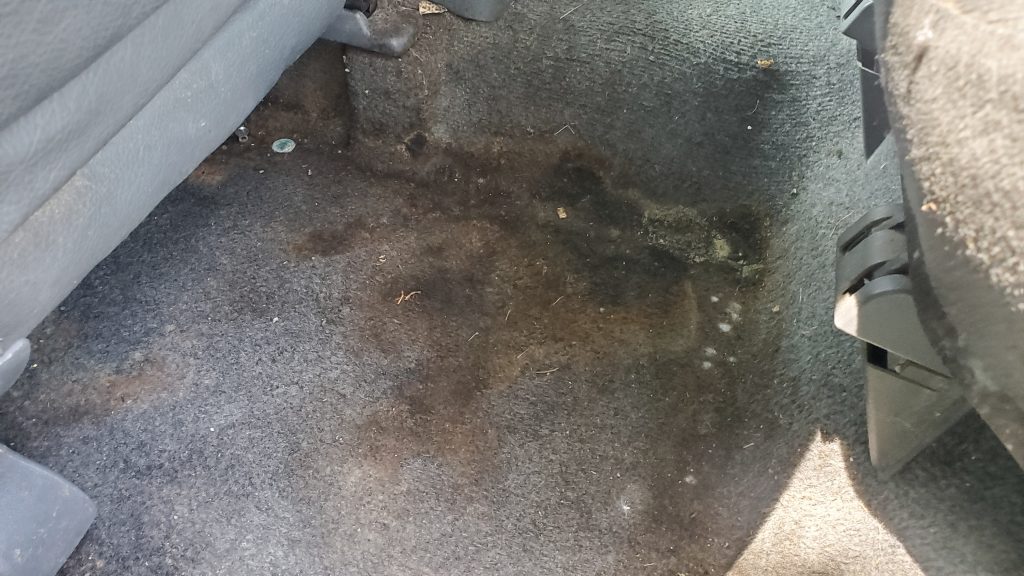 And of course, there’s this nasty ding in the rear quarter panel: 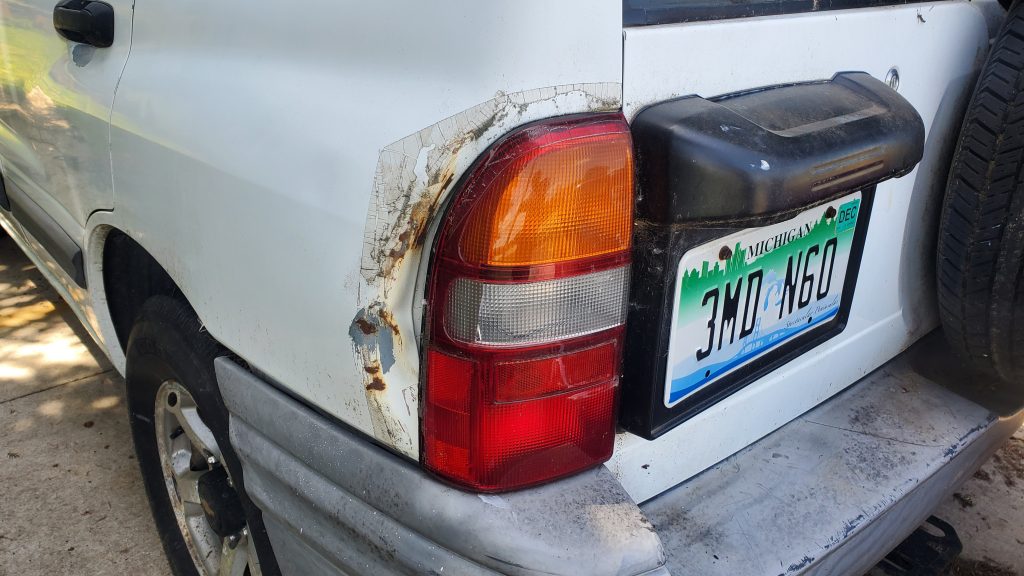 I can’t seem to get the rear door open, either, plus the tires look a bit old. Anyway, I still have a lot to do on this thing. You could argue that buying a completely-dead Geo (let’s call it what it is) is a terrible idea, but I look at it as a rust-free, five-speed, 4×4, manual transmission, relatively fuel-efficient Japanese SUV for only $700. 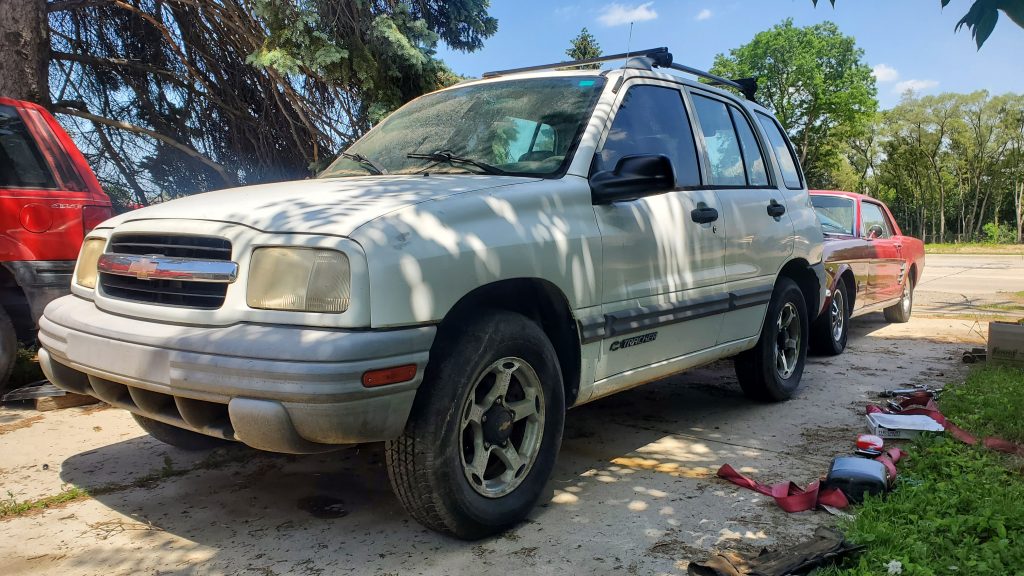 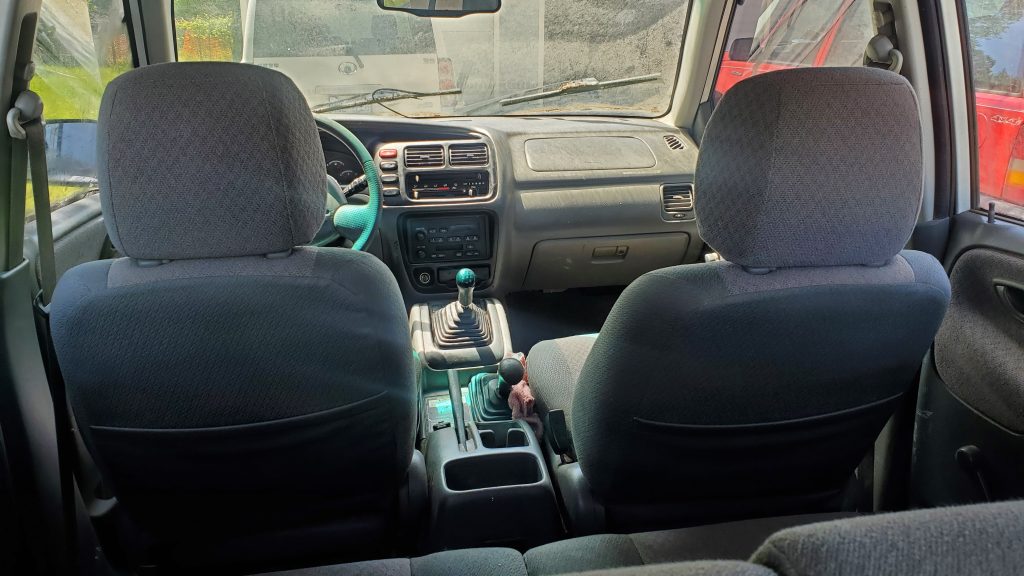 It’s was a responsible choice, really. Well, assuming it’s got any life left in it.

Rust-loving Jeep man, cofounder and EIC of The Autopian, Jason's friend. Email: david@autopian.com
Read All My Posts »
PrevPreviousI Took A Minivan On An Off-Road Adventure, Then It Tried Burning Itself To The Ground
NextMercedes-AMG Goes Absolutely Insane With The Jacked-Up, Portal Axle-Equipped 2023 G63 4×4 SquaredNext