As I cruised up Lake Shore Drive through Chicago’s prettiest neighborhoods on a perfect 75 degree sunny day, I realized that the Jeep I had just sold was perfect. It was everything I had hoped it would be when I bought it back in 2018: The 4.0-liter felt powerful, the five-speed manual shifted beautifully, the interior was gorgeous, the paint glistened, that chrome grille reflected onto the streets ahead. Four years ago I wrote that “I Went Through Hell to Buy This 1991 Jeep Cherokee But Now I Have My Dream Car.” In the ensuing years, that “dream car” became my nightmare, but on Sunday, finally, it become my dream car again. But it was too late.

I’ll allow my younger, 26 year-old self to explain how thrilled I was to have bought this 1991 Jeep Cherokee in September of 2018:

It’s not perfect, and I had to go through hell to get it (with the price ballooning from a song to $900 to $1,700 to $2,000), but in the end, I own my dream Jeep—an unmodified, rust-free, manual transmission, 1991 (the first year with the more powerful and reliable Chrysler fuel injection system and the improved cooling system), vent window-equipped Jeep Cherokee Laredo.

I need nothing more in this life.

Reading that last sentence, “I need nothing more in this life,” reminds me of just how much of a rollercoaster car ownership can be. I was so excited to own my very favorite version of my very favorite Jeep, but then the machine kept breaking. In my previous article, I listed all the parts I’ve had to replace in the 100-ish miles I’ve ever driven this Jeep since buying it. Allow me to paste that list here again, but with more recent additions included:

What an absolute nightmare this thing has been. That’s over 30 fairly-significant parts replaced, and the sad thing is: I never really even got to enjoy the Jeep. Well, not until Sunday, the morning after I arrived back in Michigan from California, where I drove the Ford Bronco Raptor (more on that soon!). 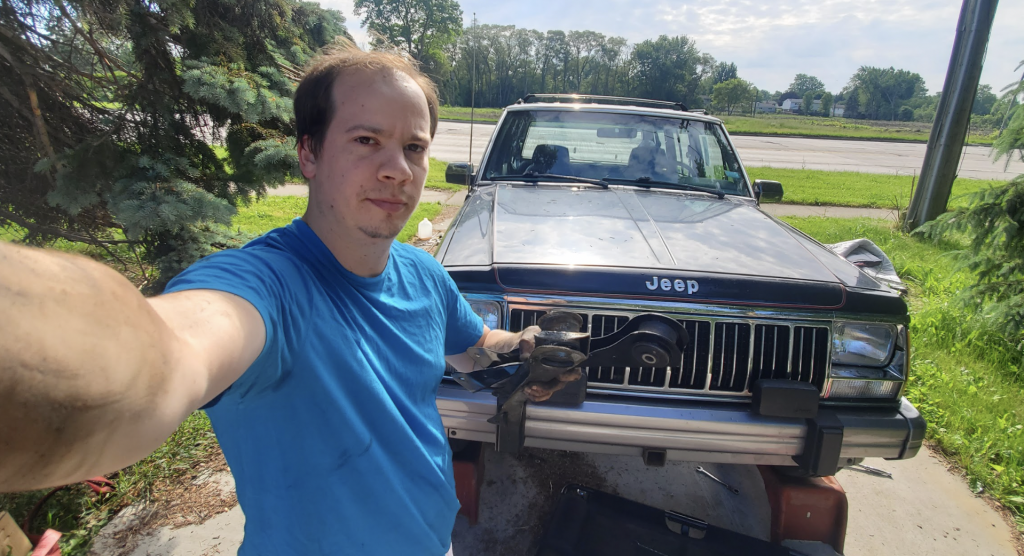 Of course, I didn’t leave when I should have on Sunday, not just because I forgot to set my alarm, but because of course the XJ just had to kick me in the ass one last time, for ol’ times sake. During my final shakedown to make sure I was delivering Tracy a machine that wouldn’t let her down (she’s an awesome woman who sold me a fantastic Land Cruiser a while back. I owe her!), I noticed a loud squeak pretty much anytime the Jeep wasn’t in a steady-state motion condition (i.e. anytime I hit a bump or accelerated/decelerated). I slid under the Jeep to find a completely obliterated upper control arm — the bushing wasn’t even connected to the damn arm anymore, so the thing was just rattling around, squeaking, and barely fulfilling its function of preventing the axle from twisting.

Luckily, I had a new upper control arm sitting around, but installing it was far more of an ass-pain than it should have been. The clearance between those control arm mounts and the front steering parts/axle tube just made removing the control arm bolts a chore. What’s more, once the old arm was out, getting the new one’s holes to line up properly required some careful use of the floor jack. It wasn’t that difficult of a job, but I had anticipated it taking 30 minutes, and it took two hours. And that delta between expectation and reality can be a mood-crusher. 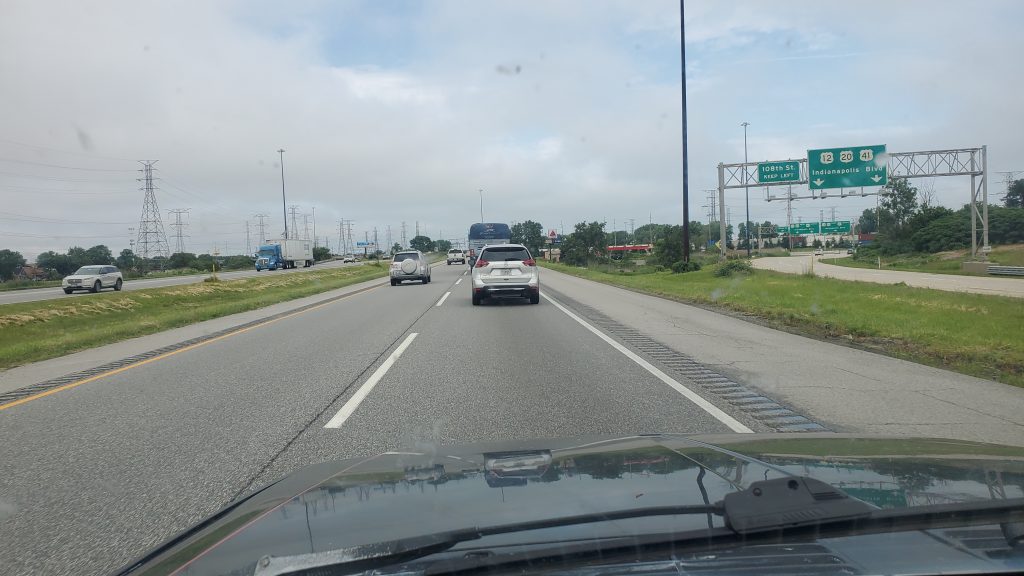 It was a late start, but I was glad to finally be heading south on I-75 and then west on I-94 across Michigan, a state whose beauty I, a guy living in the most suburban sprawl-y place imaginable (Troy), forget about all too often. The Jeep drove wonderfully. The AX-15 five-speed’s shifts were crisper and tighter than any five-speed Jeep transmission I’d ever driven. The straight-six’s prodigious torque, tasked with pushing along a lightweight 3,350 pound box, made acceleration feel genuinely quick. Highway speeds were no problem; the new leaf springs, shocks, and tires I’d installed, along with the new driver’s seat, made cruising along at 75 MPH legitimately comfortable.

The XJ that I’d been dreaming about since my youth was finally dialed in. 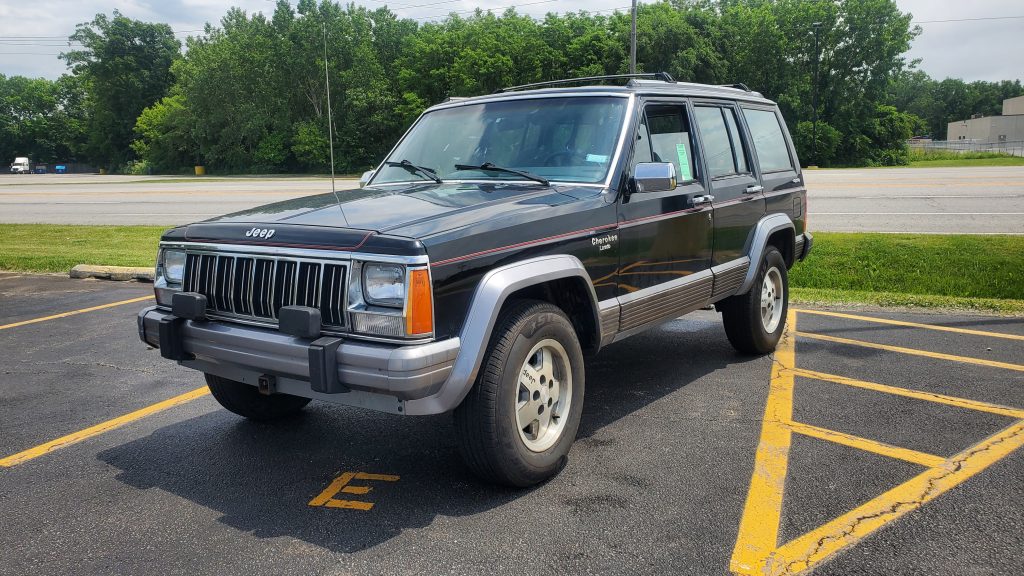 When I stopped for gas and water, I couldn’t help but look back at that beautiful profile. Recently repainted and rust-free, the chromed-out XJ Laredo looked like a million bucks, and for the first time under my ownership, finally drove like it, too. 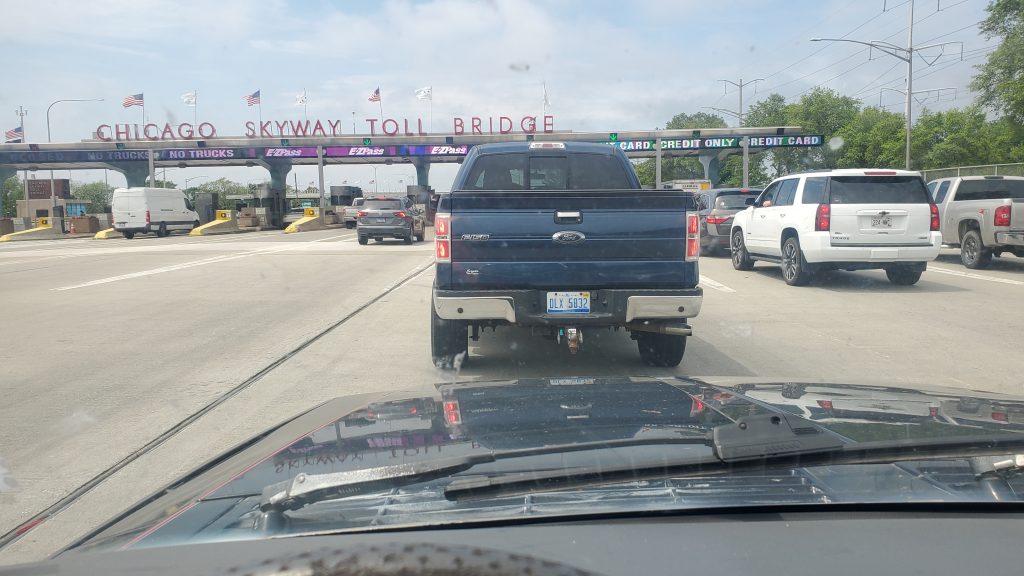 Fuel economy was less than optimal at about 19 MPG, but I didn’t care. I spun open the vent windows, rolled down the main glass, and let my arm dangle along the vehicle’s beautiful sheetmetal as 75 degree air blew across my face and sun shined through the humongous, beautifully untinted greenhouse. The shores of Michigan sat to my right as I shifted between gears in Chicago’s traffic. I passed gorgeous neighborhoods, saw kids graduating from Northwestern University, and ultimately wound up in the stunning village of Wilmette, about an hour north of downtown. 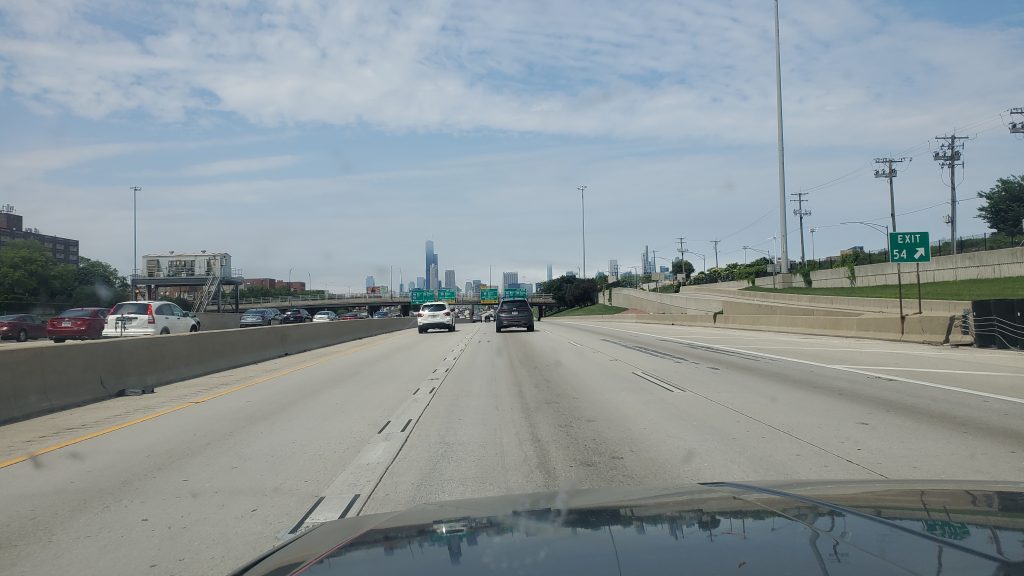 There, I dropped off  the XJ at Tracy’s mechanic, who will fix the Jeep’s air conditioning before Tracy returns from her visit to her home state of Oregon, where the Jeep grew up after her dad ordered it from the factory in 1990. 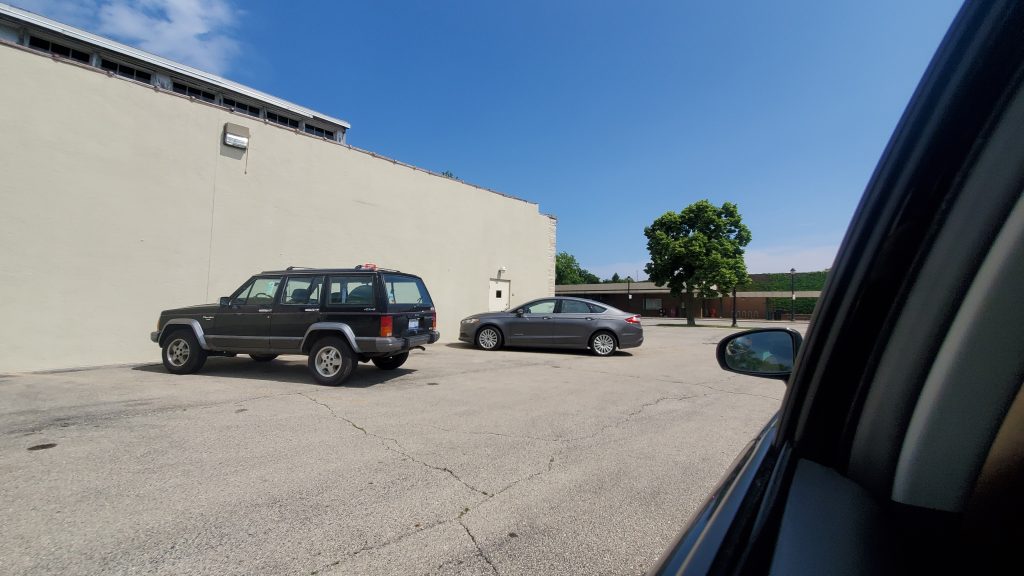 It’s wild to think that I sold what I considered the perfect Jeep after going through so much to obtain and repair it. But the Jeep hurt me too badly, and the scars are too deep. In the early days, when I first picked this machine up, I was excited, as most are when they start a new automotive relationship.
Here’s a gorgeous machine that I scored for a song, let me do a few repairs and then keep this vehicle forever,” I thought.

It was exciting, even though I knew what I was getting myself into. I realized that the Jeep had some significant flaws; it had been in an accident that had compromised the driver’s side front fender and the front axle. The problem was that, even after replacing these, the Jeep kept letting me down. The power steering pump leaked, the four-wheel drive vacuum motor went out, the wiper motor died, the steering box was toast, and on and on.

The relationship soured, and though my drive to Chicago made me realize just how amazing this Jeep is, the reality is that I can never love it. I met it at the wrong time, when it was going through some trouble — struggling with problems that it leaned too hard on me to fix. And while, in the end, I did fix these problems, and the Jeep is everything I could have ever wanted, the toll on me was tremendous. 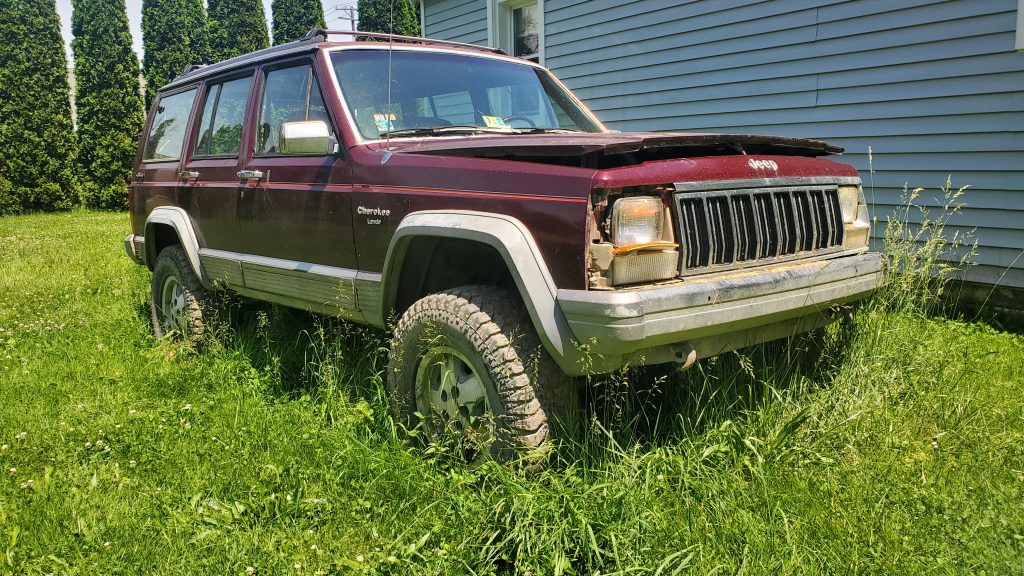 Loving a car is all about the balance between the great moments you’ve enjoyed with that vehicle and the hardships it has caused you. You want the former to outweigh the latter, of course. And while yes, I could probably take the black XJ on some epic trips, the problem is that I’d have to live 200 years for the joyful moments to outweigh the misery.

It’s for this reason that I’m going to stick with my O.G. Jeep Cherokee, Ol’ Red — a 1992 automatic that’s a bit rusty, and more than a bit broken. It needs a rear axle and possibly a new cylinder head. But it’s okay, because this Jeep changed my life. It taught me to wrench, it helped me get my dream jobs, and it’s taken me on some of the greatest off-road trips of my life. It has so much goodwill saved up that I’m happy to fix it back up. I owe it.

You see, the red Jeep and I met at the right time. I needed it when I was in college, and it was there for me. And though today, in June of 2022, the ’91 is in objectively better shape than Ol’ Red, I will gladly bleed, sweat, and cry for my trusty red box. I have never once complained about working on it, because you don’t complain about helping out family.

It’s a feeling that I know Tracy understands; she’s buying back a 30 year-old car that she learned to drive stick on many years ago. She can love it like I never will, and since I just bore the brunt of its wrath, I think her love for this machine will last for decades to come.

Rust-loving Jeep man, cofounder and EIC of The Autopian, Jason's friend. Email: david@autopian.com
Read All My Posts »
PrevPreviousThe 2024 Chevrolet Blazer EV Draws A Piano Black Arrow From Its Quiver And Aims It Directly At The Heart Of The Ford Mustang Mach-E
NextHere’s How To Make The Trailer Taillight Dreams Of A Probably Dead Guy Come True With Modern TechNext