After months without pictures, we now finally know what the Chevrolet Blazer SS will actually look like thanks to a Twitter post from General Motors CEO Mary Barra. There’s a lot going on here, so let’s unpack the Blazer’s design a touch and recap what we know about Chevy’s future midsize electric crossover.

Let’s start at the front of the Blazer. The full-width front light bar looks great with the daytime running lights on, so hopefully it still looks great when the low-beam headlights are on. Moving down the fascia, there’s a lot of dark-colored plastic here with little actual grille surface area. It’s en-vogue and should age quite well, although it’s rather unnecessary considering an EV’s cooling needs. 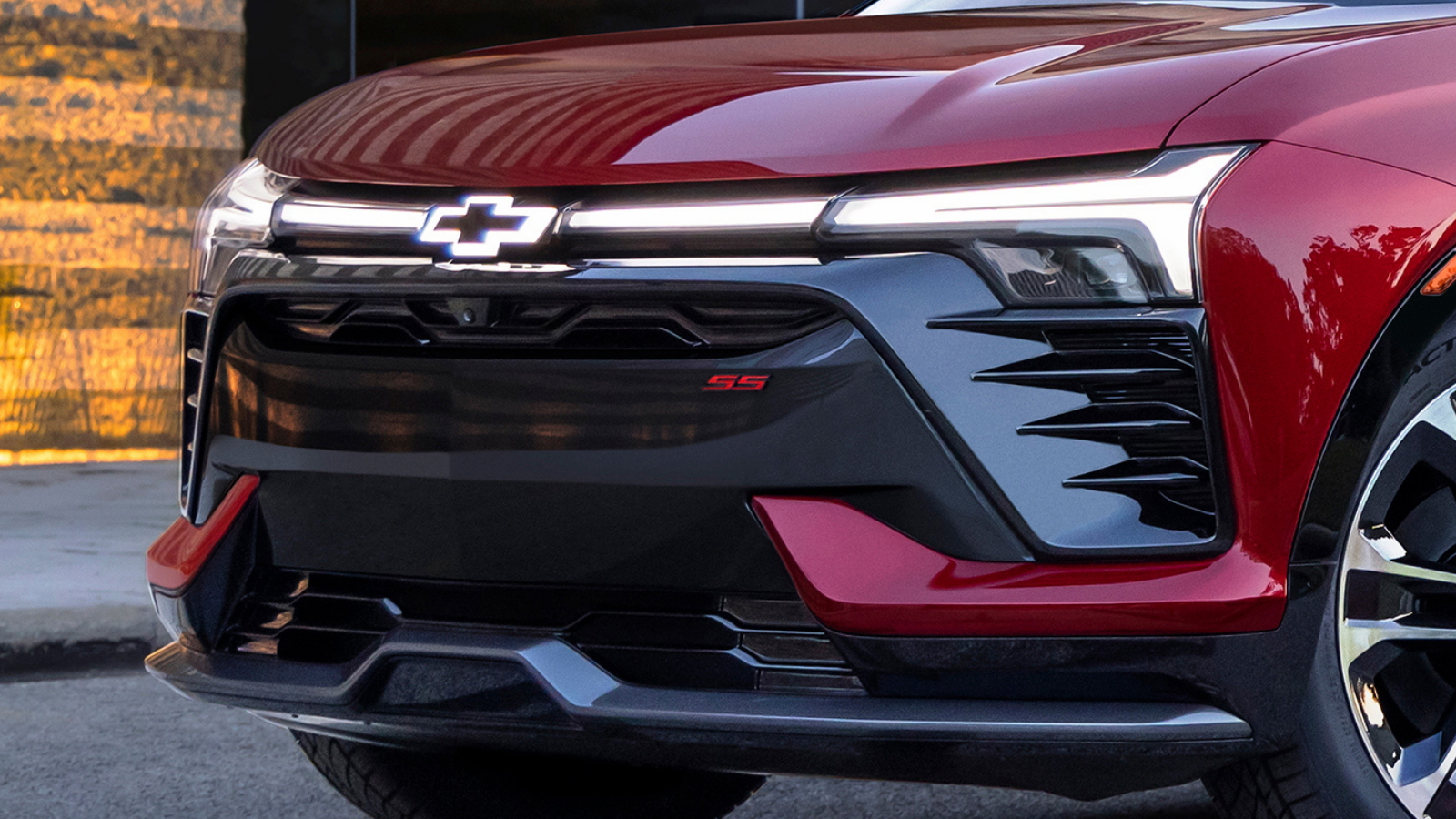 Moving along to the side of the Blazer, you can’t help but feel that this thing’s a bit like a layer cake – black, body color, more black, some sort of skirt package. The first layer of black lowers the roofline, the second layer of black shrinks the visual height of the body, while the weird faux-splitters ooze the eBay-sourced false bravado so popular in modern performance cars. Like heartbeat graphics on Geo Trackers, these oddly-contoured bits of plastic imply a certain sportiness. On the plus side, the sharp character lines over the fenders are very Audi, and the steady roofline actually looks like it should allow for a rather usable cargo area. 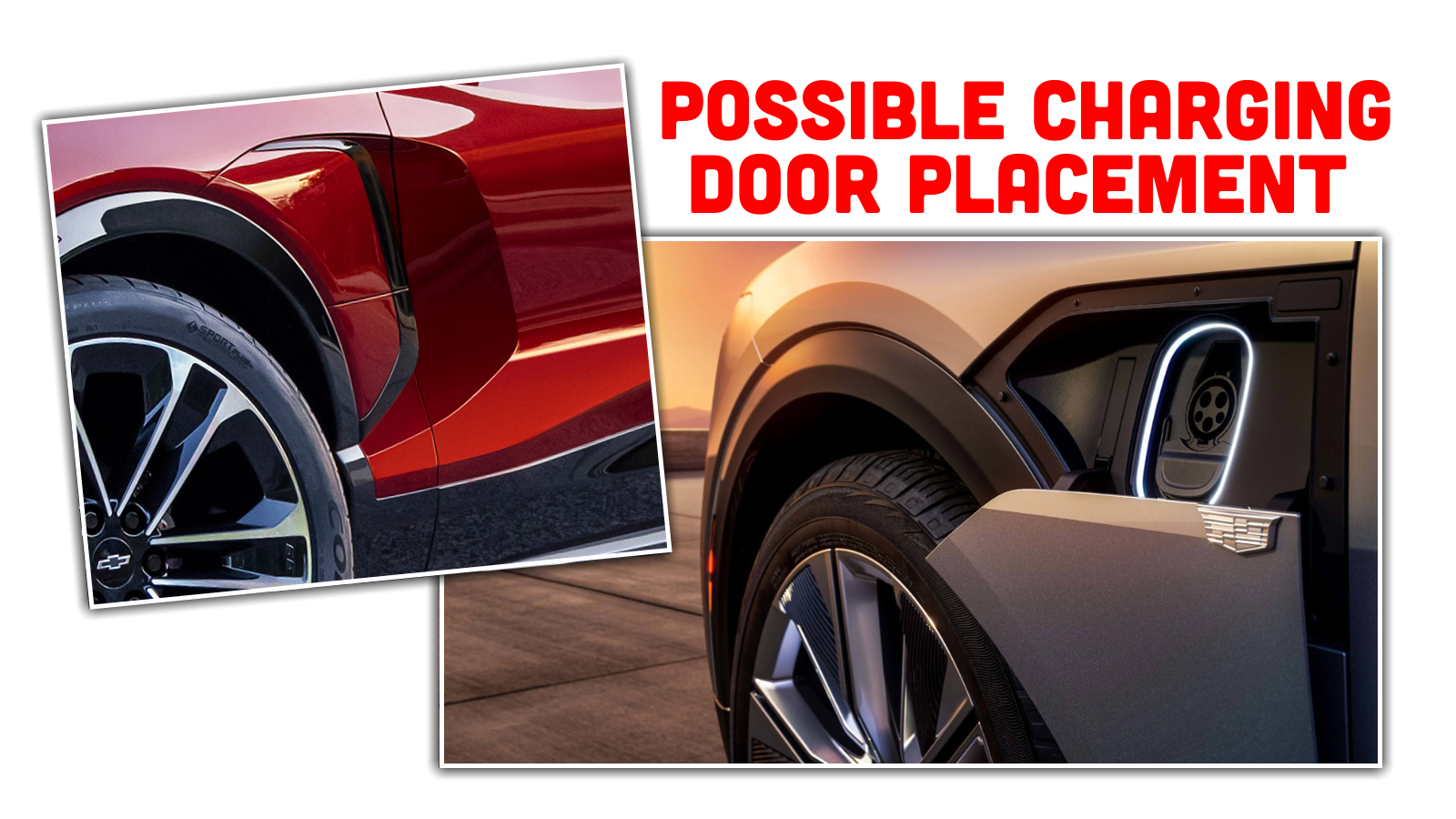 Of course, while we’re at the side of the Blazer, we must address some weirdness. Oh Blazer! My, what large gills you have. Yeah, the fish-like apertures on the front fenders are a bit strange, but they’re likely placed there for a purpose. See, the Blazer rides on the BEV3 architecture that also underpins the Cadillac Lyriq, and the Lyriq has its charging port right on the left front fender. Judging by the fender cut line, there’s a solid chance that the Blazer’s left gill opens up to reveal a CCS port. Add in how the scalloping into the door tricks viewers into believing the Blazer’s dash-to-axle ratio is longer than it actually is, and there’s good reason for Chevrolet’s stylists to pull this trick.

So how about underpinnings then? With Detroit’s pony car wars seemingly shifting into, um, Clydesdale wars, the Blazer takes aim squarely at Ford’s Mustang Mach-E electric crossover. How do we know for sure? Two little letters tell us so. While Juicy sweatsuits and trucker hats are back, this isn’t the 2000s when Chevrolet would slap an SS emblem on everything from the Silverado pickup truck to the Malibu midsize rental car. Over the past decade, the SS emblem has been applied to Camaros, rebadged V8 Holden Commodores, and that’s about it. Proper high-performance vehicles, so this Blazer must be packing some serious heat. 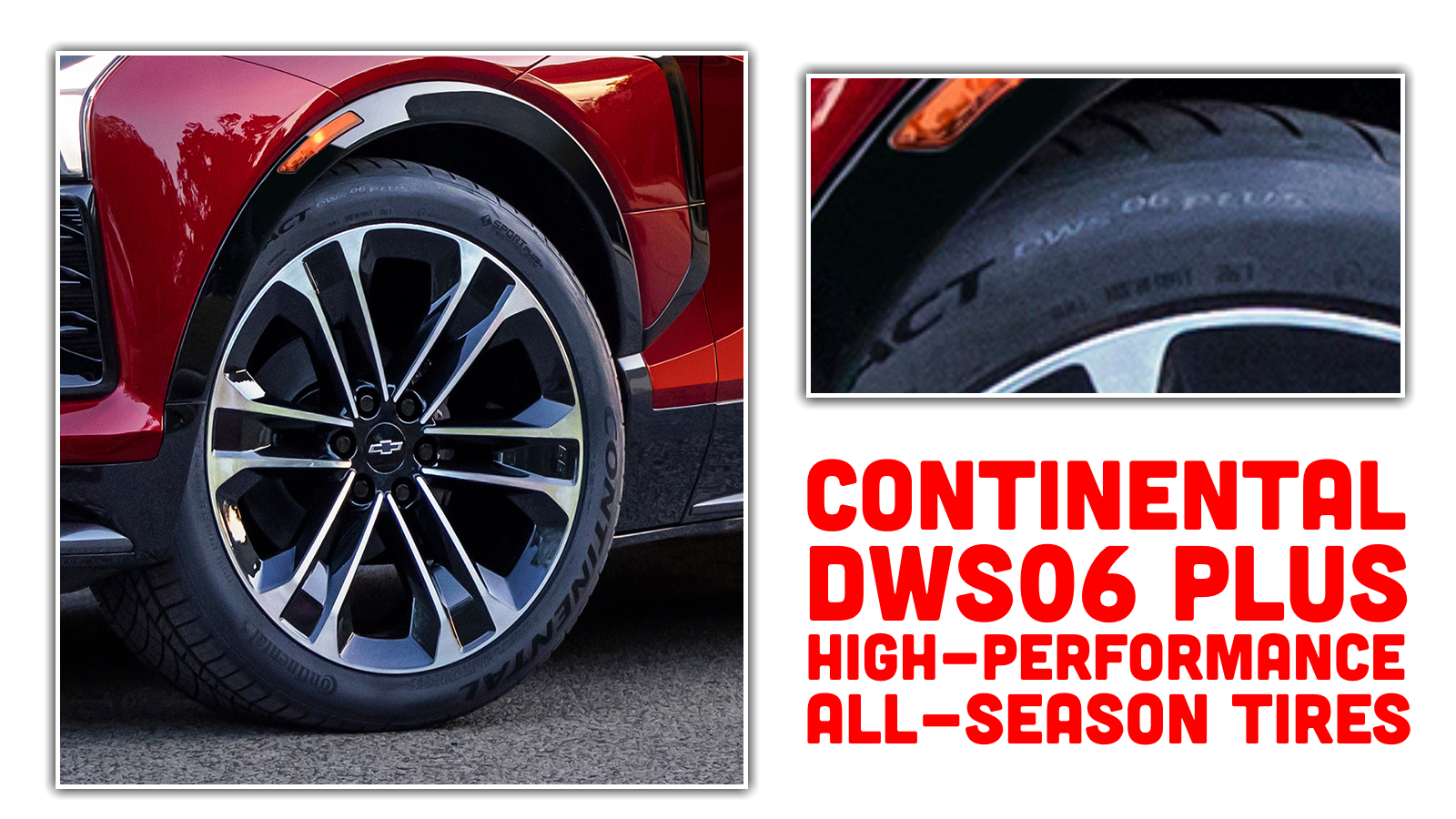 As a sign of Chevrolet’s seriousness, take a look at the Blazer SS’ tires. They’re Continental’s DWS06 Plus performance all-seasons, a rather interesting potential choice that seems to imply a few possibilities. See, the DWS06 Plus is quiet, grippy, and a solid all-season choice, but it isn’t the most crossover-focused tire on the market. The only off-the-shelf 20-inch size that would fit a typical modern crossover in a square fitment application is a 255/50ZR20. Everything else is either really wide or doesn’t have the sidewall. With a load index of 109 in 255/50ZR20 sizing, assume a total load rating of 9,084 pounds assuming even weight distribution. It’s no secret that electric vehicles are heavy, so the possibility of a 109 load index might somewhat kneecap the Blazer SS’ towing capacity. Of course, there’s also the very substantial chance that the Blazer SS won’t use a size or tire carcass off the shelf.

See, GM works quite extensively with tire companies to develop high-performance tires for GM vehicles, with each high-performance GM OE tire often coming stamped with the characters TPC SPEC. Goodyear makes original equipment tires for high-performance Camaros like the ZL1 1LE, Michelin makes original equipment tires for Corvettes, so this could be the first time in recent history that Continental has been an OE tire supplier for a high-performance Chevrolet vehicle. Continental does offer a TPC Spec SportContact 6 SSR for the all-wheel-drive variant of the Cadillac CT4-V, so this should be a good connection to leverage. If the Blazer SS does end up with a bespoke tire, I assume several crossover owners with direct fitment options will be pretty excited. 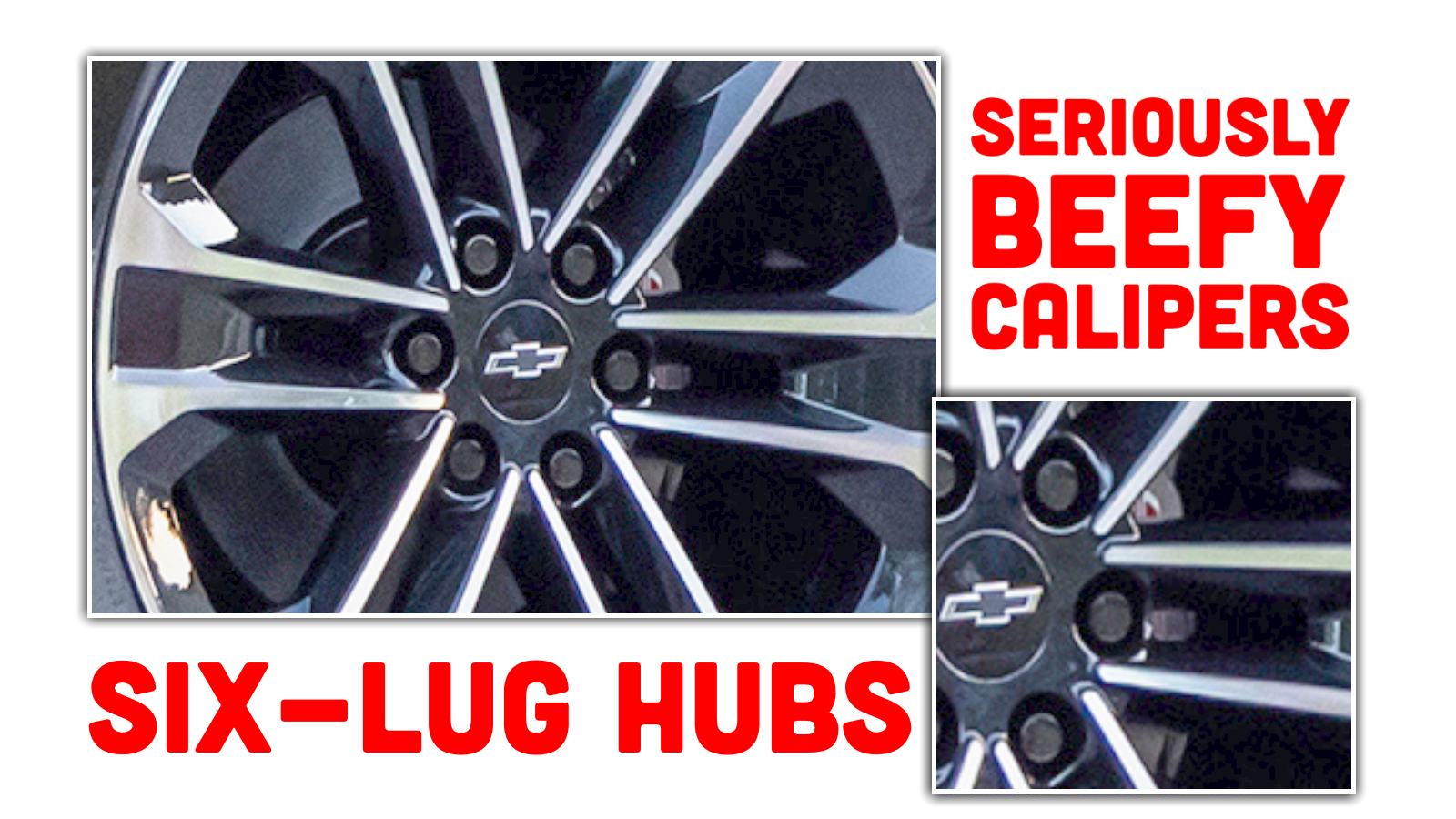 A six-lug hub pattern is also a fairly interesting choice. GM’s no stranger to six-bolt-hubs on cars that shouldn’t need them like the first-generation Cadillac CTS-V, so it shouldn’t be hugely surprising that both the Cadillac Lyriq and Chevrolet Blazer feature six fasteners. Hey, EVs are heavy and torque-rich, more clamping force likely isn’t a bad thing. However, it does mean that future Blazer SS owners who want a separate set of winter wheels might have to look harder for wheels than anyone with a common 5×114.3mm or 5x112mm bolt pattern. Of course, the brakes will also likely be a complicating factor. If we crop in to the front wheel and lighten the image, we can see a pretty beefy brake caliper peeking out from behind the spokes. A rather nice thing to see, if I’m being honest. 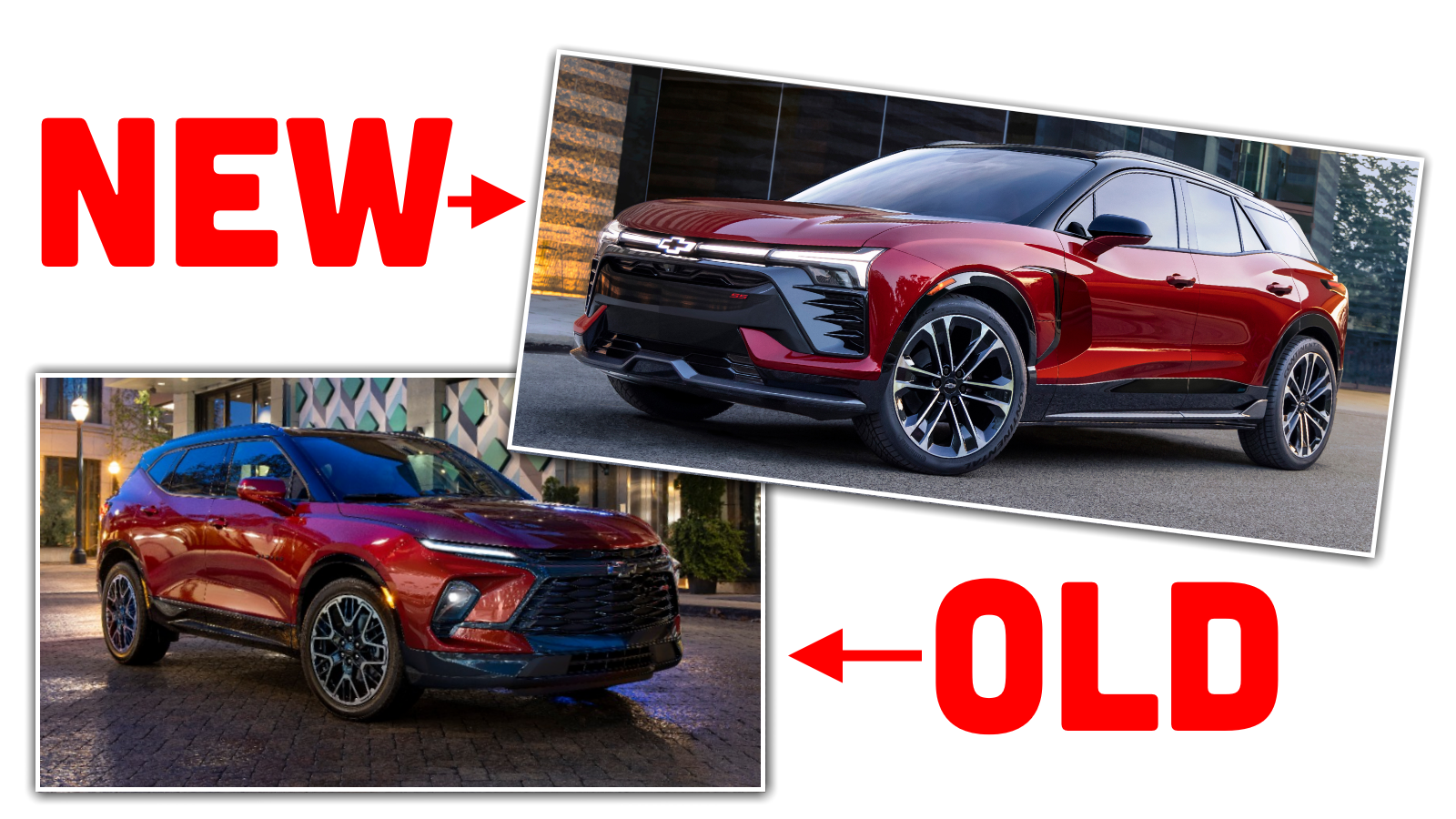 Honestly, we don’t know much more than this about the Chevrolet Blazer EV. What we can tell you for sure is that the full reveal is set for July 18, with an on-sale date in the Spring of 2023. While this first look is certainly promising, it’s worth mentioning that the SS won’t be the only Blazer on the market. GM hasn’t yet released photographs of lower-trim models which will likely receive different cosmetic treatments from this high-performance trim.

I’m quite interested in seeing where this crossover goes. More performance vehicles of any sort that aren’t from luxury brands seem like a good thing, and electric crossovers are genuinely pretty great. Take a propulsion tech that’s heavy but green, slap it in a practical but typically lumbering and inefficient vehicle, and get properly low running costs, heaps of space, and a relatively small handling penalty over a regular crossover or electric sedan. Plus, they’re great for hauling parts we can put on our fun cars. Now who’s going to be the first to pick up an LS3 crate motor in an electric Blazer?

Thomas is a Nu Rave-blaring, heel-toe downshifting, maple syrup-swilling, chassis-geeking, junkyard parts-hauling, floppy-haired scenester who's been writing about cars since college. His current ride is a 2006 BMW 325i with the six-speed manual gearbox. Instagram: @thomas.hundal Twitter: @thomashundal
Read All My Posts »
PrevPreviousTake A Look At The Rarely-Seen Automotive Library At The Quirkiest Car Museum In America
NextMy ‘Jeep Cherokee From Hell’ Drove To Chicago Flawlessly And Reminded Me That Love Is All About TimingNext