The Czech carmaker Škoda is largely unknown in mainstream American car culture, and while that’s understandable (you’re more likely to meet a dog that took improv classes at The Groundlings than you are to see a Škoda on US streets) it’s also kind of a shame, because I think they make some really fascinating cars, often with unexpected details. Like their rear-engined cars where the front trunklid opens sideways, like a grand piano. But I think one of the greatest party tricks in all of this Czech carmaker’s arsenal has to be the extra seating setup used in the “fun” version of their Škoda Felicia pickup truck, appropriately called the Škoda Felicia FUN. It’s just so damn clever I could do something like spitting, but better. Let me show you.

You can think of the Felicia FUN’s innovation as a sort of marriage between two other small-truck funnovations: the foldable mid-gate, as seen on the Chevy Avalanche and Toyota bB Opendeck, and the seats in the truck bed, as seen, famously, on the Subaru BRAT. 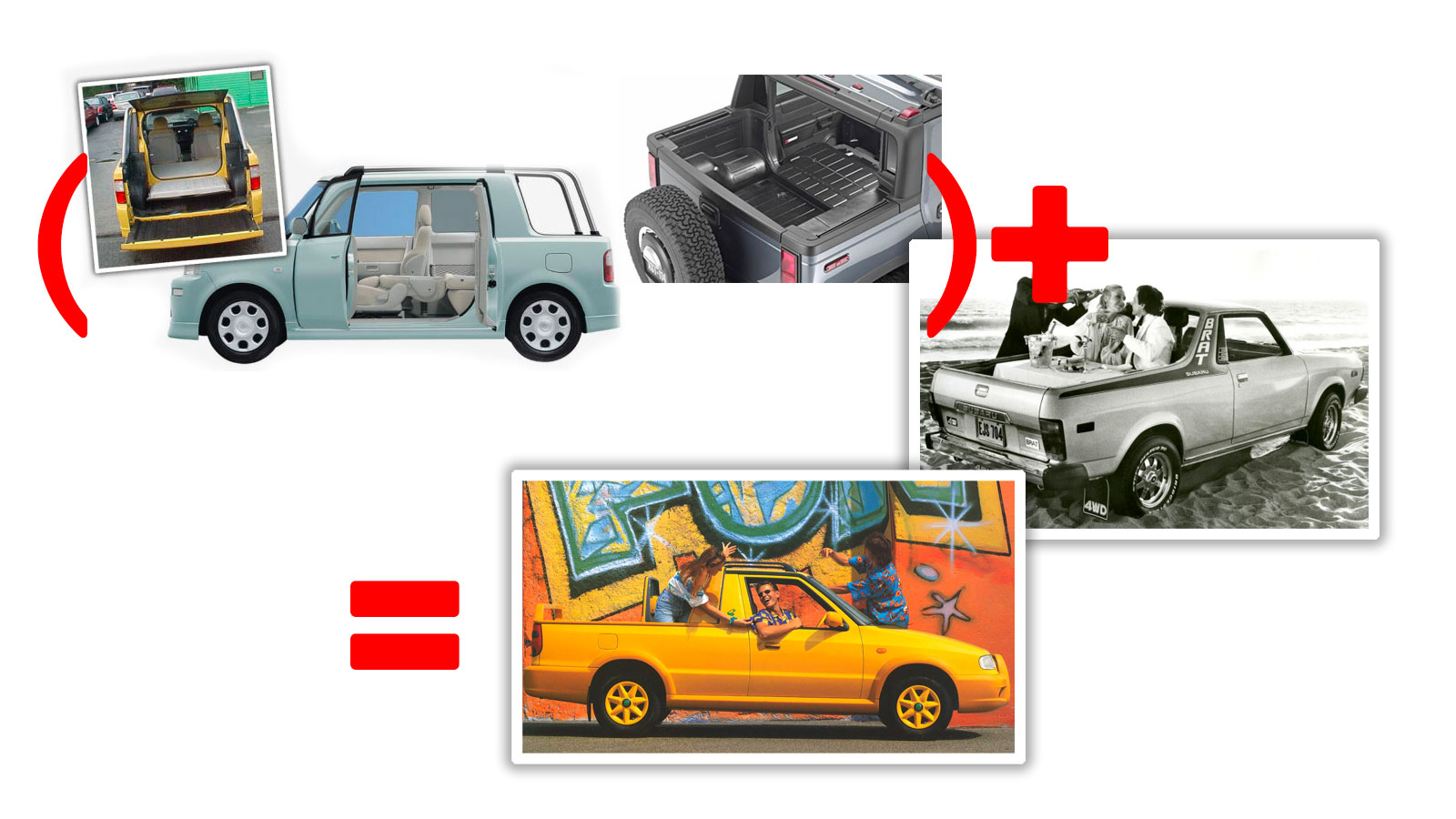 Okay, so what’s going on here? Well, the Felicia FUN was, essentially a version of the pickup truck variant of the Škoda Felicia, which was in turn an update of the Škoda Favorit, which was Škoda’s first transverse front engine/front wheel drive car after years and years of Škoda sticking with rear engine/rear wheel drive cars. While I personally adore the rear/rear setup, Škoda realized that the world – especially small European car world – was going FWD, and they were kinda late to the game. So, the Favorit was born, and then developed into the Felicia, which was Škoda’s last indpendent platform to be developed before they became part of the VW Group.

The point of the pickup was to sell to the commercial, workhorse market, but Škoda understood that thing the winter caretaker of the Grand Overlook Hotel made so clear: all work and no play makes Felicia a dull girl. So, with that in mind, a “lifestyle version” (Type 796, if you care) was built, which just means it was something made for fun instead of work, hence the name. 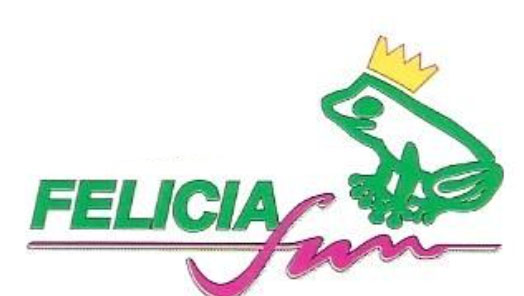 So, the Felicia Fun got bright colors and fun upholstery with a pattern that had little crowned frogs, which was the mascot of the truck, a little sketch of a regal frog, likely a firm but fair ruler of his little amphibian kingdom. When the truck was shown at the Geneva Auto Show in 1995, it featured a little “party trick,” as Skoda themselves called it:

Probably the FELICIA Fun’s biggest surprise was in the interior: The innovative idea of a folding and sliding rear wall and two emergency seats had found its way into a series-production vehicle and was far more than just a futuristic show car feature. The refined mechanics, known within the company as the ‘party trick’, were incorporated into the standard equipment of the FELICIA Fun. When the emergency seats were unfolded, the depth of the loading area, which was covered with spruce wood, decreased from 1,370 to 850 millimetres.

I think calling them “emergency seats” sounds a little alarmist for their actual use, which was the sort of emergency you might have when you manage to convince two hotties of your preferred gender to hop into your truck. Here’s a little video that shows how these things got deployed:

Look how well that works! The midgate lifts up and back on those hinged rails, grabbed from that big bar, then the seat bottom folds into place, and boom, two more seats! There were even options to add a roof and windows to the back seats: 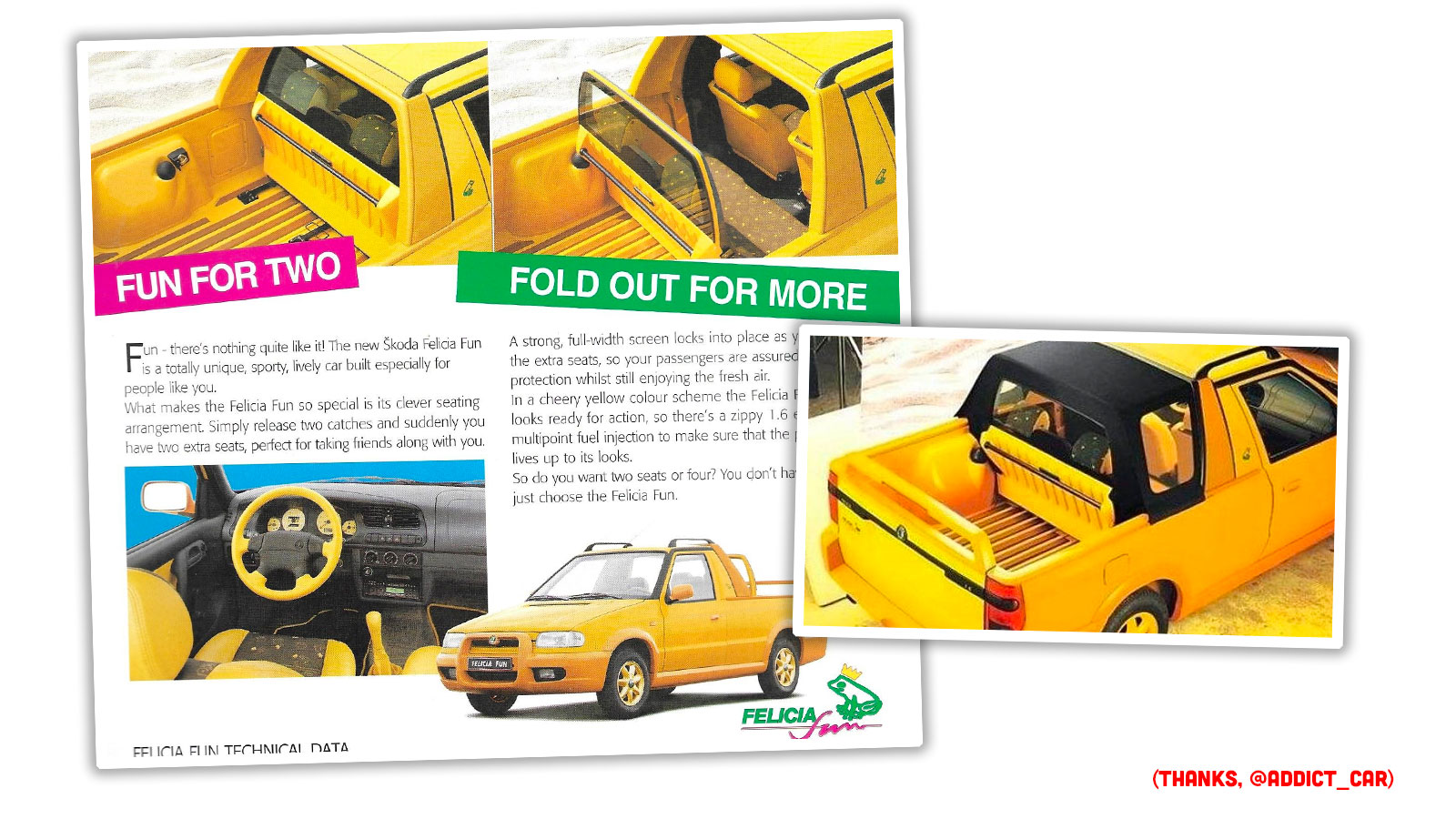 Škoda built the Felicia FUN from 1995 to 2001, and you could get them with 1.9-liter/64 horsepower diesel, or either a 68hp/1.3-liter or 75 hp/1.6-liter engines, all inline-fours and pretty conventional small European car-type drivetrains. But nobody bought these for their raw power or speed, of course, they bought them because they were both useful and silly, and for some of us out there, a second row of seats that origamis out from the back of a truck cab is just an irresistible draw.

I get the appeal. I feel like we haven’t been in an era where we’ve seen much of this unselfconscious frivolity in cars, and that’s a shame, but I do have some hope. I think in our approaching era of widespread EVs, the near-standard skateboard-type chassis and the packaging flexibility that provides may make such fun, odd innovations like this viable again, and perhaps even more than before, since EV drivetrains are generally pretty uniform, making the need for other more aggressive differentiation even more important.

I think we’re already seeing this in vehicles like the Rivian, with its Swiss Army-style of storage compartments and slide-out kitchens. I bet we won’t have to wait too long for a rebirth of the midgate and fold-out seats.

Take your inspiration from this old Czech, modern EV makers. Because FUN is fun.

I'm a co-founder of the Autopian, the site you're on RIGHT NOW! I'm here to talk to you about taillights until you cry and beg me to stop, which I absolutely will not. Sorry. Hug? Also, David's friend.
Read All My Posts »
PrevPreviousWhy Society Has Deemed A Crappy Truck Cooler Than A Crappy Car
NextCold Start: The Mysterious Floating GloveNext