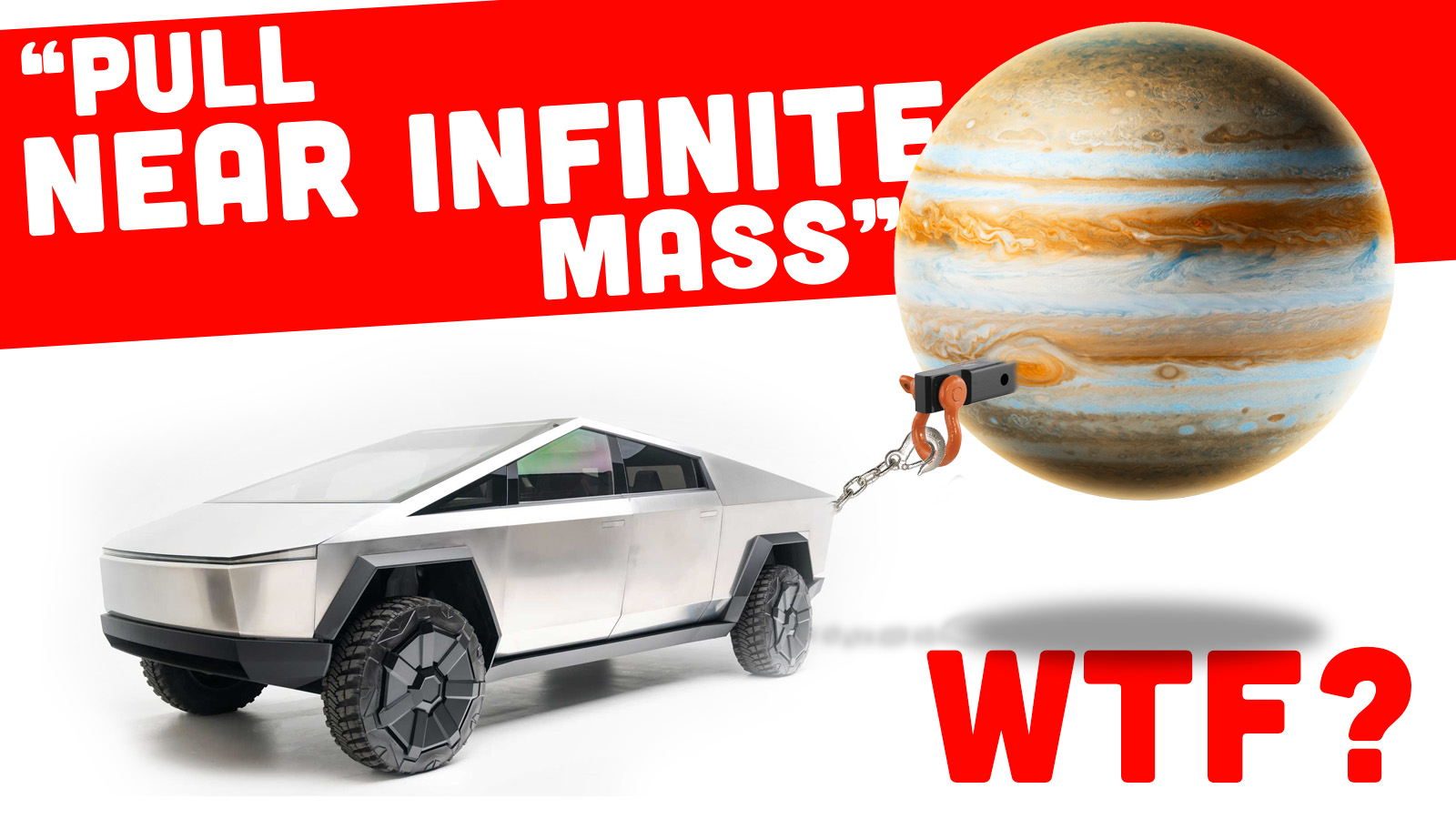 At this moment in time, the Tesla Cybertruck is a machine that is mostly hype. I’m not saying it’ll never actually get produced or anything like that, but I am saying that most of the general concept of what a Cybertruck is about 75% hype at the moment. Sure, there’s some plans and prototypes and massive amounts of pre-orders, but most Cybertrucks do their driving in the fevered imaginations of hardcore Tesla fans. Tesla’s own website for the Cybertruck certainly contributes to this, with plenty of specs and numbers that have yet to be verified, but there’s one claim on there that’s worth pointing out, because it’s so incredibly absurd. You know it’s good because it uses the phrase “near infinite mass.” What? What does this even mean? Let’s dig into this madness, just a bit.

I should also note I’m by no means the only one to raise an eyebrow at this; people on sites like Twitter and Reddit have noted it for years, but it only caught my eye recently. And now I can’t stop thinking about it. Here’s what it says, specifically:

With the ability to pull near infinite mass and a towing capability of over 14,000 pounds, Cybertruck can perform in almost any extreme situation with ease. 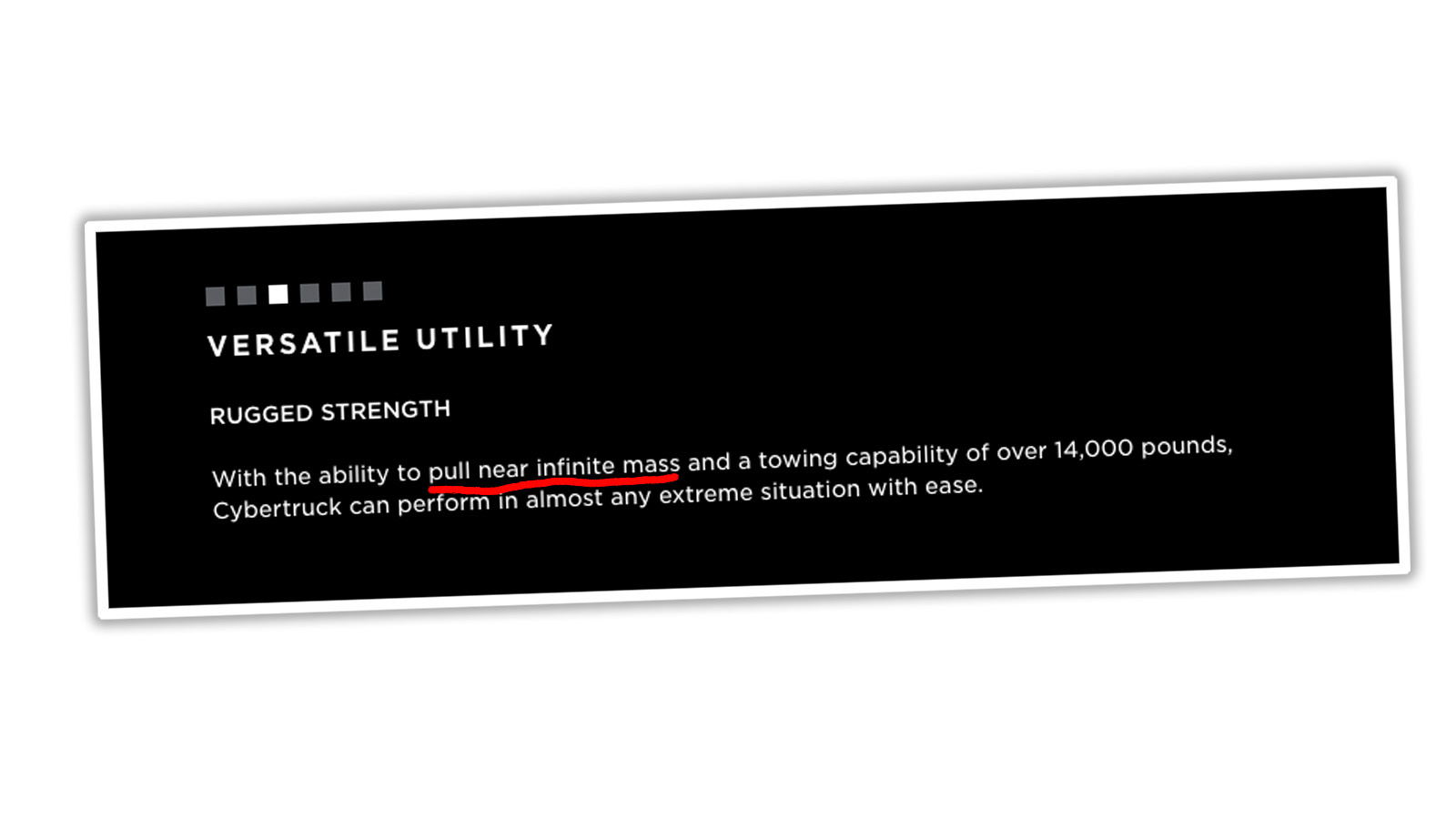 So, the Cybertruck can pull “near infinite mass?” What the fuck does that even mean, “near infinite.” Infinite is, well, infinite! There’s no beginning or end, so how can anything be “near?” Five pounds is just as close to infinite pounds as 500,000 pounds is. If you don’t believe me, you’re welcome to test it yourself, and try counting from 5 to infinity and then 500,000 to infinity and tell me which one gets you there quicker. I’m not going to wait up for you, though.

That idiocy aside, what do they mean, exactly, by “pull?” I suppose they’re implying that the Cybertruck can pull really, really massive things, like trains or airplanes or spaceships, but you know what? Lots of trucks can. In fact, those three specific things I mentioned have all been done by other trucks, because this is a well-known PR stunt:

Look, a plane (a freaking Mini is doing this one):

Many, many vehicles are capable of pulling extremely heavy things slowly over flat, smooth surfaces. There’s whole classes of quite small vehicles that do just this, as a job, every day, like airport tugs.

Our very own engineer-in-cheese David Tracy even wrote about these sorts of pulling stunts a few years back, where he noted that while many vehicles can do these sorts of performative towing feats, they’re not really a useful, real-world test of anything. There’s a standard for what is, though, and it’s the SAE J2807  test that actually takes into account real-world criteria like overheating and handling and braking performance.

The sort of pull that Tesla seems to be referring to with the Cybertruck’s absurd claim must be what’s known as a drawbar pull, which is the amount of horizontal force available to a vehicle at the drawbar for accelerating or pulling a load. There’s a formula for computing it, even:

I suppose once we actually know what the Cybertuck’s stats are for all these things, we could compute what its drawbar pull would be. I’m willing to bet good, damp money that it’s not going to be anywhere close to “near infinite mass,” though. So if you were planning to tow, say, Jupiter closer to your backyard because it would look awesome in the sky when you had cookouts, I think you’re out of luck.

None of this, of course, is news, because it’s just physics. What is worth noting is the language Tesla is using here, and how it’s indicative of a larger pattern. Just choosing to use the phrase “near infinite mass,” knowing that it’s inherently meaningless but was chosen because someone at Tesla thought it sounded badass or whatever should be a bit of a warning: This is a vehicle that may turn out to be more focused on perception and image than actual utility.

“Near infinite mass” is a sort of insulting phrase to use, because it treats the potential customer as a rube who gets easily dazzled by science-sounding hyperbolic words, and that’s all that whomever wrote this may care about. It crumbles almost immediately under even the most mild of scrutiny, and while all carmakers (especially for trucks) like to play up their vehicles abilities, sometimes with a bit of deliberate obfuscation, we should have some limits about what is just clearly bullshit.

And “near infinite” being used in any context describing a truck’s capabilities is very much bullshit. Unless they’re talking about the Cybertruck’s near infinite ability to provoke eye-rolling. That I’d believe.

I'm a co-founder of the Autopian, the site you're on RIGHT NOW! I'm here to talk to you about taillights until you cry and beg me to stop, which I absolutely will not. Sorry. Hug? Also, David's friend.
Read All My Posts »
PrevPreviousThe Volkswagen ID.7 Electric Sedan Promises Tesla-Beating Range And A Fix For VW’s Infotainment Disaster
NextJust A Reminder That We Don’t Take Photos With Our Refrigerators When We Sell ThemNext