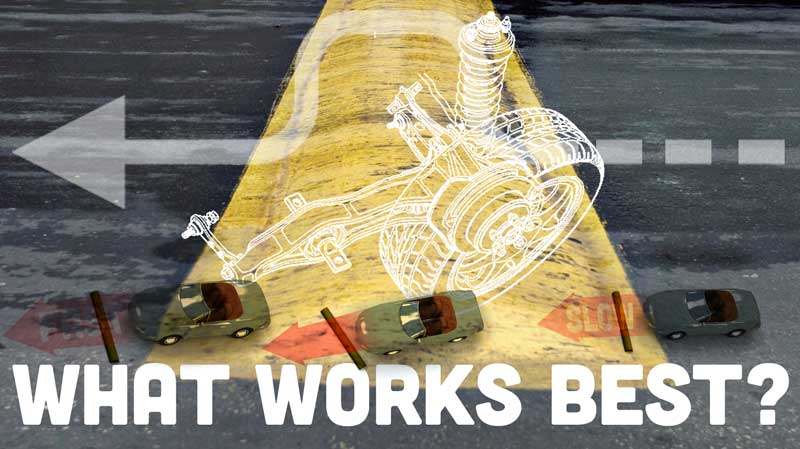 If you’ve spent any time driving a car these days you will no doubt have encountered them, probably cursed them, and maybe even damaged your car on them. I’m talking about your and my favorite road feature, the speed bump. Or as the English call them, the sleeping policeman (a bit morbid if you ask me, but hey, they invented the language so I suppose they can call it what they want).

These speed-reduction devices seem to be popping up in more and more places these days, and if you live in India, they are absolutely everywhere — even in the middle of highways. In the U.S. and pretty much everywhere, residential areas seem to be the favorite places for them to breed; their rate of multiplication tends to match that of local residents.

In my years of driving I’ve noticed different ways people cross these dreaded things and I’ve boiled those methods down to three strategies:

1. Slow down and turn just before the bump to cross over diagonally
2. Maintain speed, and power through
3. Lower your speed and drive over slowly.

Let’s talk about each of these and then I’ll let you know which “speed bumper” I am and why.

Cross My Heart and Hope to Die 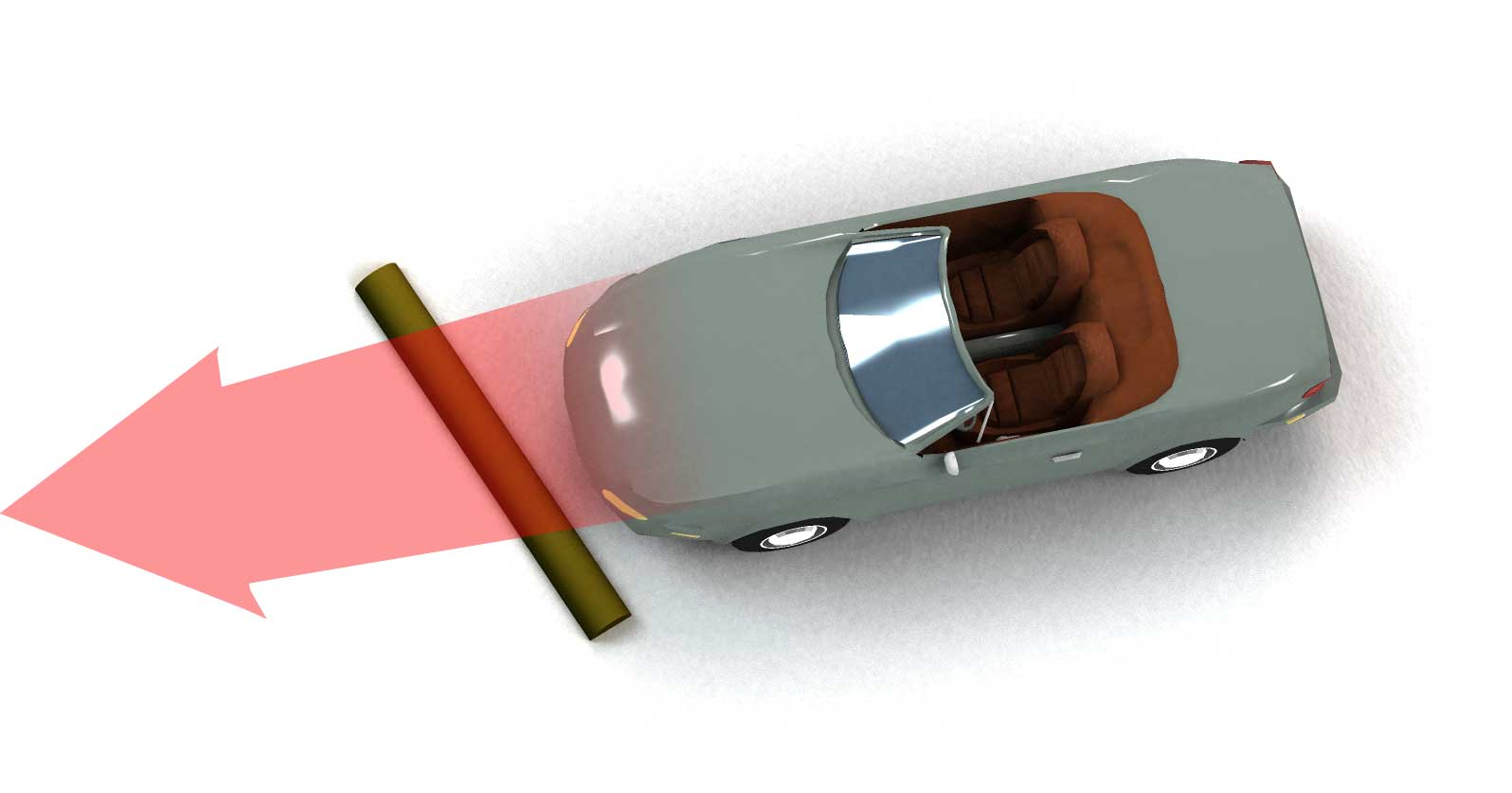 Let’s first talk about diagonal speed bump crossers. These are the folks who approach a speed bump and then at the last minute turn the wheel sharply so the car drives diagonally over the bump. Each wheel hits the bump separately and the car pitches sideways as each wheel goes over. If you had any coffee in your cupholder it has now drenched your center console. Or your passenger just whacked their head against the door glass and is now cursing you instead of the speed bump.

As each wheel drives over the speed bump it wants to lift the car. But the other three wheels are still on level ground and they don’t want to be picked up. Even though the suspension is designed to isolate the sheetmetal from the forces coming from the road, those forces still go into the body via the springs and dampers. This means the body of the car is fighting with the other three wheels as it tries to push down on some and lift the others. The result is that the body wants to twist out of shape and the only reason it doesn’t is because of the welds that hold it together and the stiffness of the metal it is made of. 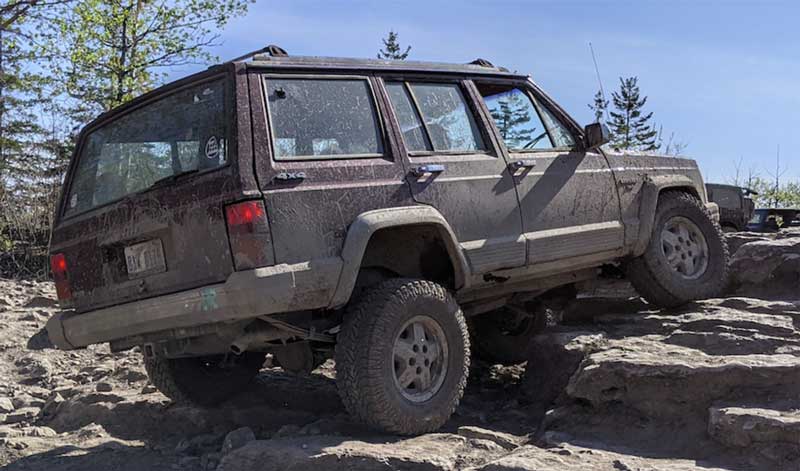 If you’ve ever jacked up a corner of an older car you may have noticed it can be hard to open the doors. It’s the same thing. The body has been twisted out of its normal shape and the doors are now jammed shut. Put the car down and everything is fine again because the twist is gone. In the meantime, the welds of the body have been stressed and it is possible for some of them to just give up and pop open. What is more likely to happen, though, is that as the body is trying to twist, other parts that are connected to it — like the dashboard, or the seats, or the headliner — are also being asked to twist and the clips and bolts holding those things in place aren’t nearly as strong as a weld. Do this enough times and those little fasteners will start to loosen and create nasty squeaks and rattles.

The same twisting is also happening in your suspension. Much of the suspension doesn’t really care about this but most cars these days come equipped with anti-roll bars front and rear and these bars connect the left and right side suspension systems. 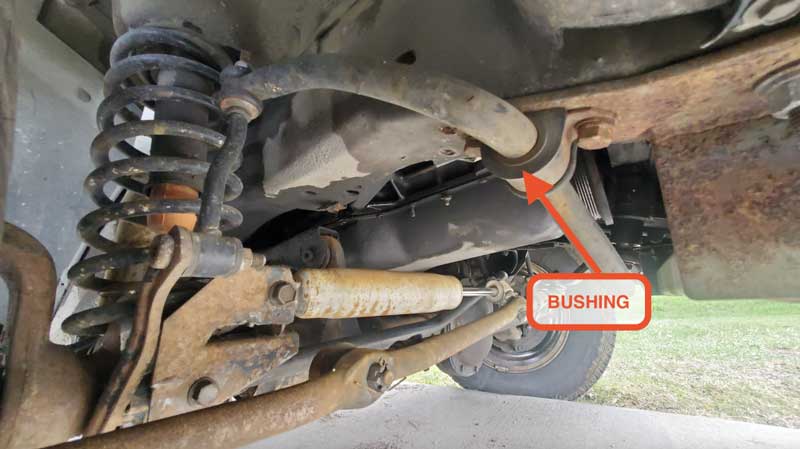 When one wheel goes up, the anti-roll bar has to twist, which stresses the bar itself but more importantly, it stresses the rubber bushings that hold the bar in place.

Damn the Torpedoes. Full Speed Ahead! 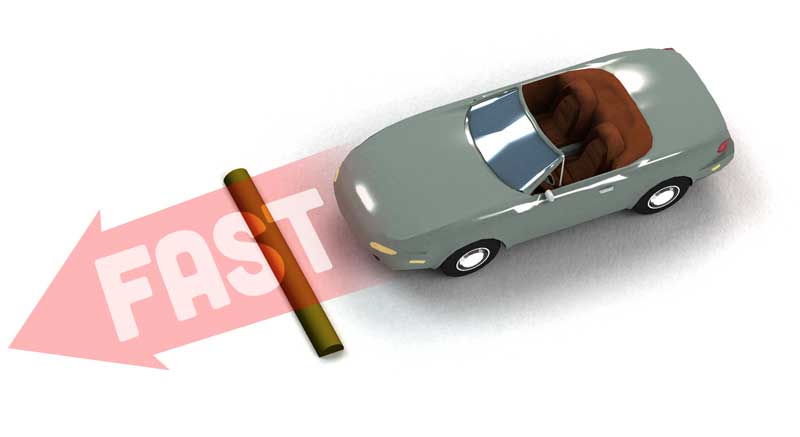 Some people believe when it comes to speed bumps that the accelerator is their best friend. The faster you go the less you feel them – Must be good, right? Well, not exactly. When your suspension comes up to a speed bump, it has to move up and out of the way to cross it. The faster you go, the faster the suspension has to get out of the way. This causes very high stresses in all the parts that make up the suspension and can seriously reduce the life of those parts, especially the dampers.

Dampers work by forcing hydraulic fluid through many tiny holes as the wheels move up and down. The movement of this fluid is how a damper absorbs energy, turning it into heat and slowing down the motion of the suspension. To get a better understanding of how a damper works, imagine jumping on a sealed plastic bottle filled with water. The fluid doesn’t compress, so — aside from the bottle changing shape a bit, your landing is going to feel really stiff. Now imagine poking a small hole in the bottle. When you jump on it, you’ll squeeze water through that hole and you’ll feel less resistance than with a sealed bottle. As you increase that hole size (or add more holes), the “damping” becomes less and less, and the bottle feels softer when you stomp on it — in other words, the bottle displaces more for a given input. If you remove the lid entirely or add a bunch of holes, and jump on the bottle, you’ll experience basically no damping — in other words, nothing will be there to resist your motion towards the ground. 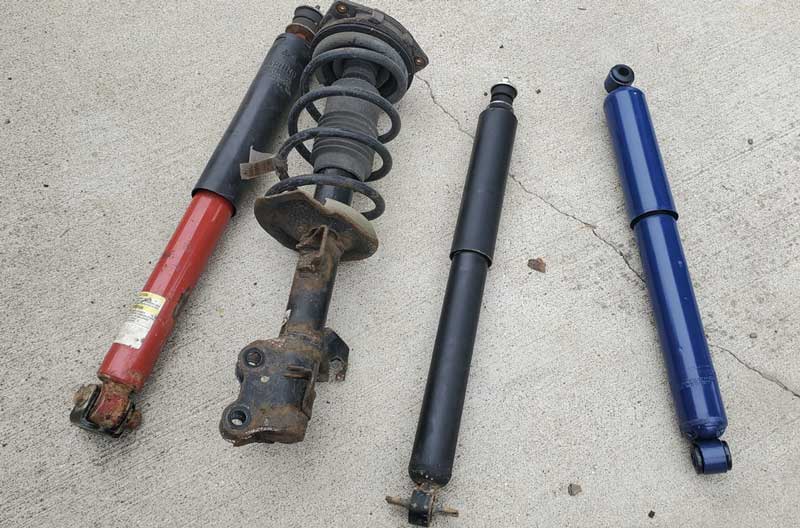 Without dampers, your car would hit a bump, the springs would compress, and that potential energy in that now-compressed spring would push the wheel down (and thus, the body up), this would then stretch the spring, and that potential energy in a stretched spring would pull the wheel up (and to a lesser extent pull the body down). The spring is pushing and pulling the wheel/body, sending the car bouncing up and down along the road like a pogo stick, because there’s nothing to absorb that energy and turn it into heat. You may have seen older cars with worn out shocks bounce as they drive down the road; it’s a wonder those drivers don’t get seasick.

To get a feel for how driving fast over bumps could affect shock life, let’s continue our water bottle analogy. If the bottle only has a small hole and you stomp on it, what is likely to happen to that hole? If you guessed it would get bigger or just rip open, you are right. The same thing can happen to the damper but in this case it is the rubber seals keeping the hydraulic fluid inside that might rip open. Again, the faster you drive over the speed bump, the faster the damper has to move, and the more pressure you build up. The result is a greater chance that something will burst.

So for those who like to drive fast over speed bumps, you may not be feeling the bump, but your suspension sure is.

Slow and Steady Wins The Race 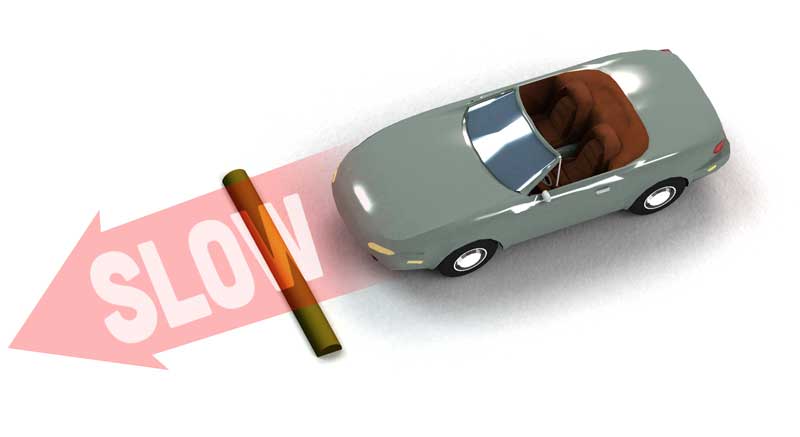 The last type of speed bumper is the one that slows down to a crawl and drives over the bump two wheels at a time. This method keeps the suspension in its more or less normal position because the body has time to move up with the bump. Since two wheels are going over the bump at the same time, neither the suspension nor the body is being asked to twist and since it is all happening slowly, the dampers don’t have to move and force fluid through those tiny holes at high speed.

By now I’m sure you’ve already guessed which type of speed bumper I am. I cringe every time I see someone fly over speed bumps at high speed. As a dynamics engineer, I can’t help but feel for the poor suspension being abused like that. And as someone who absolutely hates squeaks and rattles, I just can’t bring myself to cross them diagonally. Slow and Steady wins the race, in my book. Yes, this may seem like the obvious answer, but I figured I’d walk you through my thought process; it was just something I had to get off my chest.

So, which type of speed bumper are you? Cross my Heart and Hope to Die? Damn the Torpedoes, Full Speed Ahead? Or Slow and Steady Wins the Race? Let’s discuss.

I have been an automotive engineer for all 31 years of my career, mostly leading chassis design work. Some fun suspension projects I led: The 2005 Ford GT and 2012 Tesla Model S.
Read All My Posts »
PrevPreviousThis Remarkably Complex Lego 5-Speed Transmission Video Is A Great Way To Learn Transmission Basics
NextI Just Got A $3,200 Check From The State of Michigan For Hoarding Cars. Now It’s Time To ‘Reinvest’Next