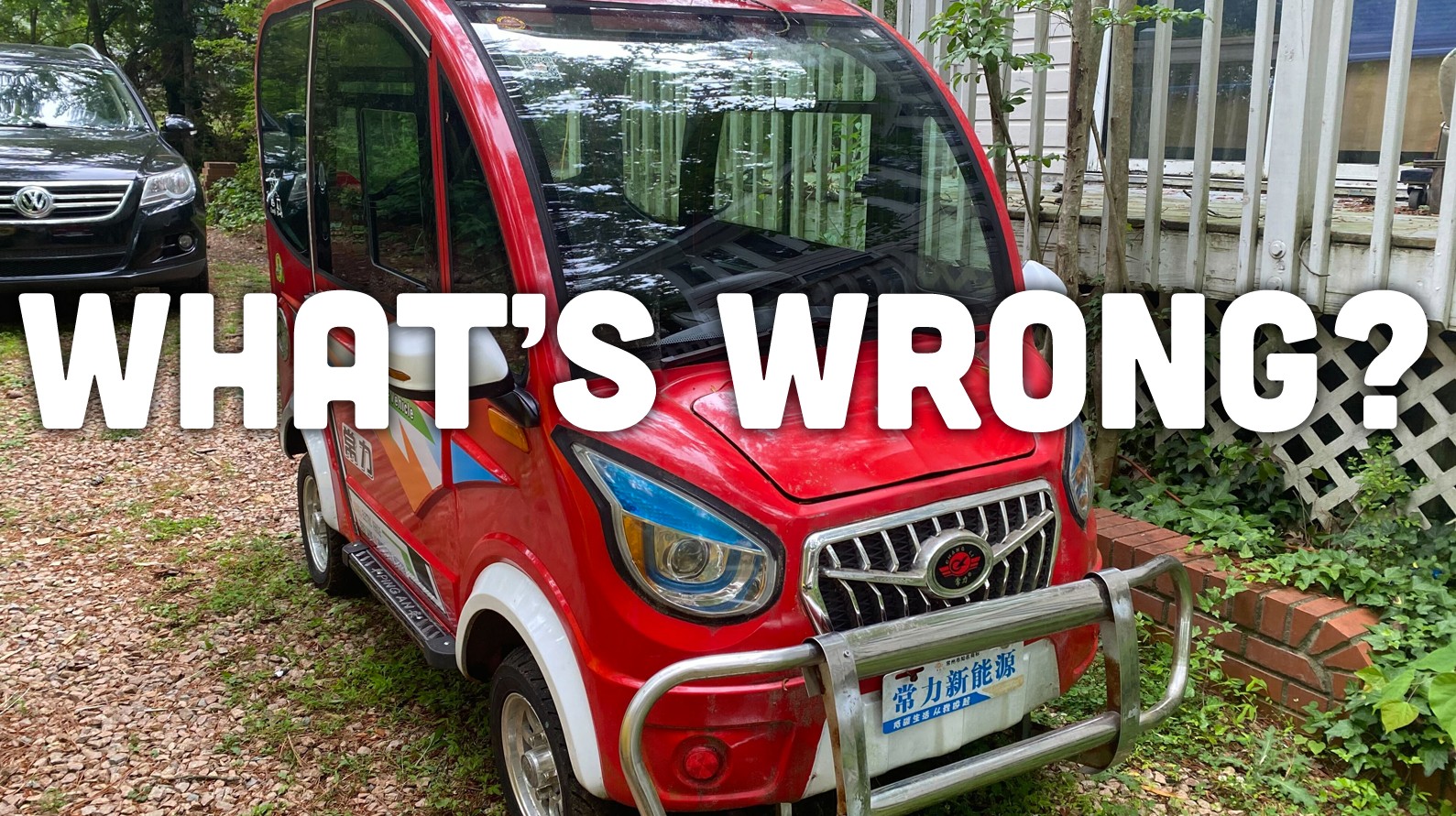 I want to preface this by reminding everyone that overall, my Changli, the Cheapest Car In The World, has been incredibly reliable. After about a year and a half of ownership, I’ve only really had one breakdown, and I was able to fix that with some electrical tape. This time, though, there seems to be something more significant going on, and I’m a little stumped.

Last week, the Changli was doing just great! David was by for a visit, and my kid Otto and David and I drove that little 1.1 horsepower Chinese electron-burner all over town. Zero problems, just good, honest Changli fun. 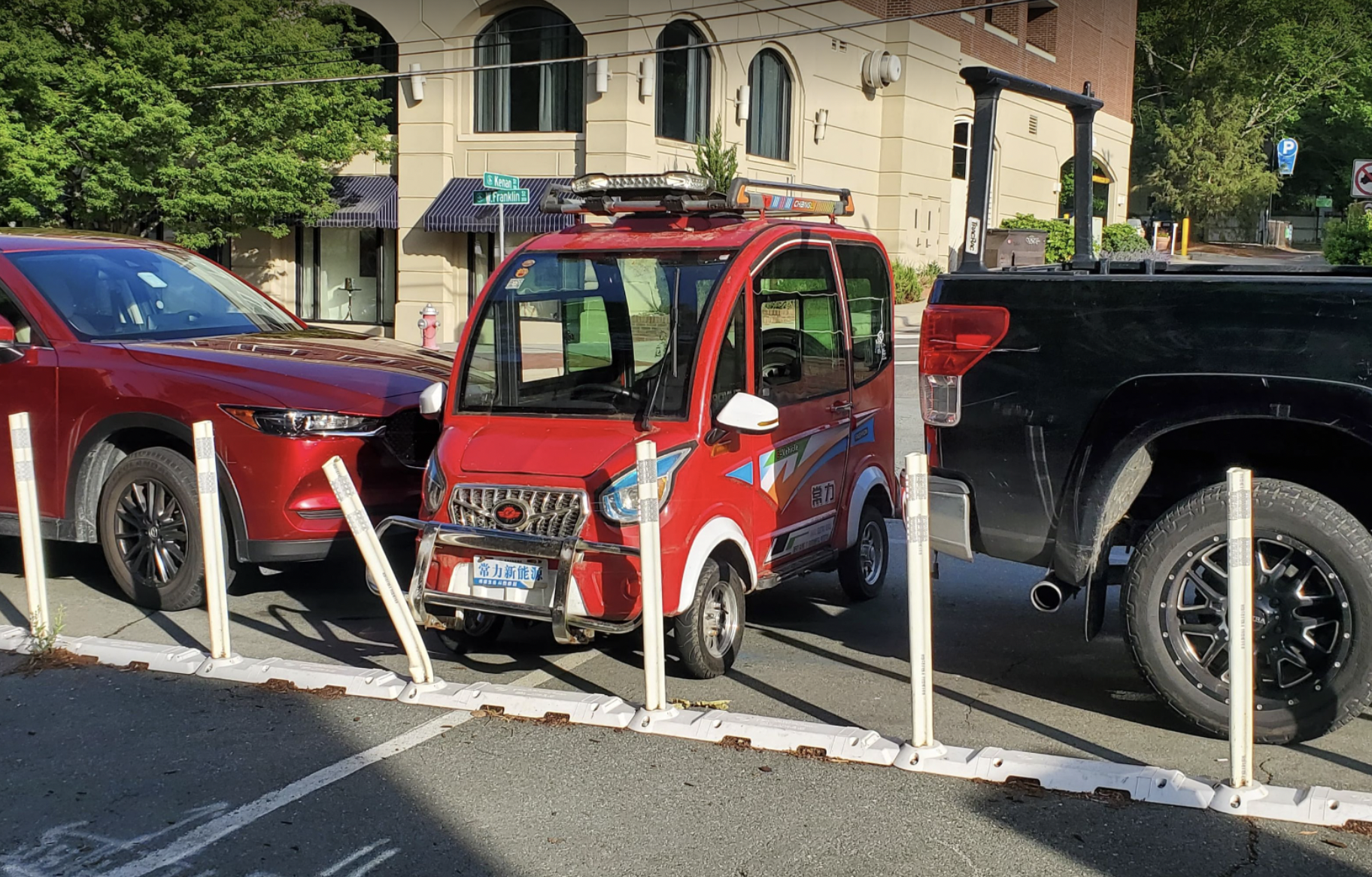 I was in Detroit for a week, and when I got back and wanted to take the old ‘Li out, I was met with a pretty basic problem: It didn’t want to move. And moving is something that I personally think is a real desirable quality in a car, even if you wouldn’t necessarily know that from looking at my driveway.

It turns on fine, dash display comes on, the voltage shows the expected number of 63 volts, but when I attempt to drive, this happens:

Hear that weird pulsing? It sounds like some kind of strange, intermittent short, maybe? Like the motor is being stopped and started over and over. I checked back at the motor assembly itself to confirm, and that’s what it seems to be doing: pulsing on and off, I think. Here, look:

It’s funny to me that I still asked my kid to hit the “gas” even though, of course, there’s no gas involved here. The sounds and motion do kind of remind me of a poorly-running small gasoline motor, but that’s just a silly coincidence.

I checked the under-seat battery area again, where the problem was last time, and did find some evidence of a similar issue to what happened before, in the Changli’s one breakdown: 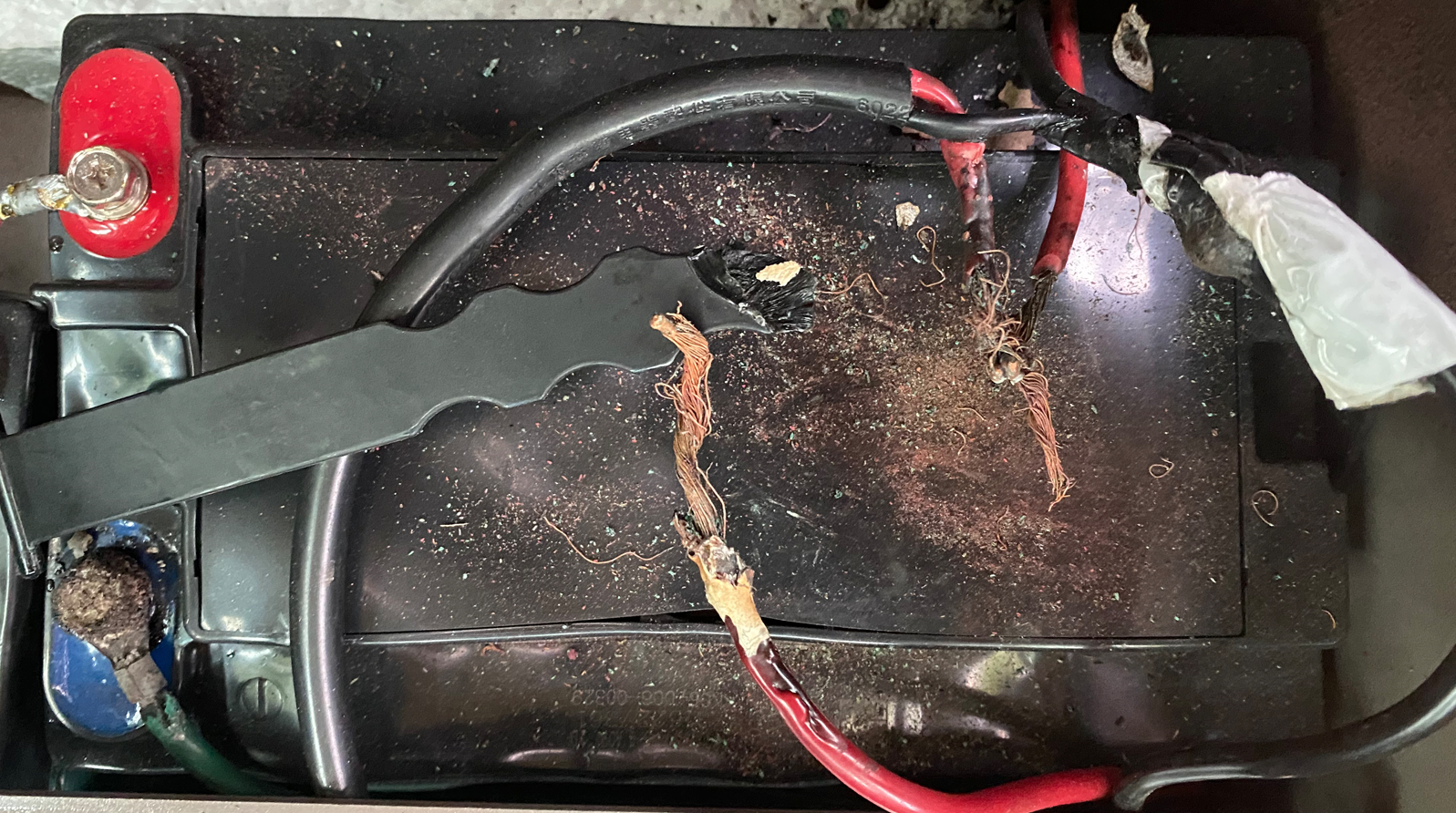 Something is still causing this wire bundle to heat up and melt things and cause problems. Last time it just melted its own tape off and came disconnected; this time, because of my better-than-factory twisting and taping skills, the bundle stayed together, and instead actually got hot enough to melt through the plastic battery handle, which isn’t great.

The picture up there shows the condition of things after I un-taped and disconnected things. That revealed this: 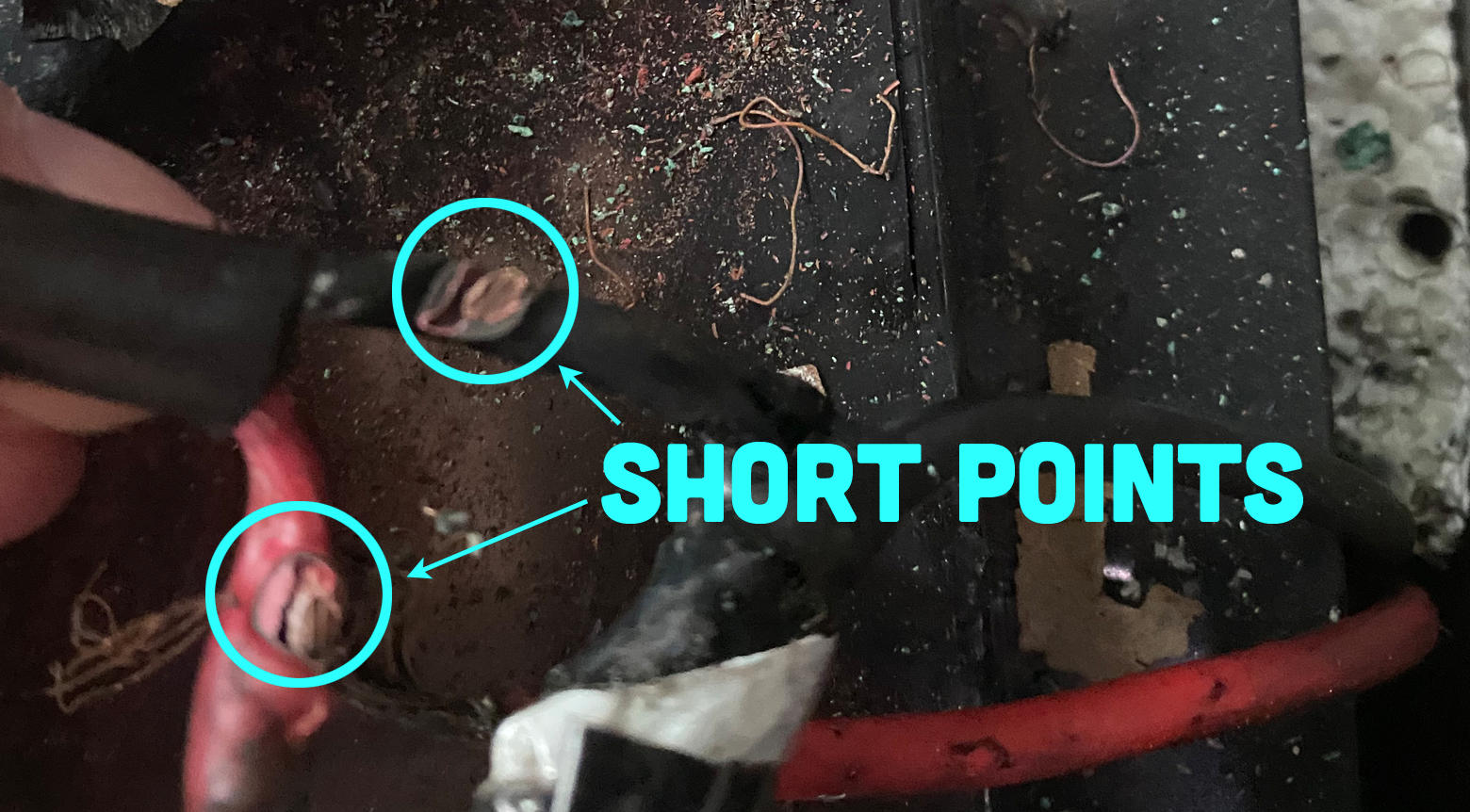 So, the heat had melted the insulation, and two close wires ended up with bare wire touching, causing a short. I thought this had to be the issue, so I got everything apart, cleaned up, taped up the exposed wiring, and figured that’d be it, but no luck. Still the same pulsing behavior.

So, now I’m wondering if maybe the short fried something in the motor controller? And, is the motor being pulsed on and off, or is it possible it’s getting polarity reversed over and over?

I tried in forward and reverse, and each time I got a small motion in the selected direction before the rhythmic pulsations began, so I think it’s at least moving in the right direction.

I’m not exactly sure how to diagnose this; I suppose I could try to put 63 volts directly to the motor and see if it spins normally, bypassing all of the controls in between, and confirm that the motor itself is okay.

I can also open up the controller and look for obviously burned/charred/etc. components. I didn’t see any smoke coming from them, or smell anything too odd, though as I type this I think I recall smelling something as we drove last week.

But, like the legendary ads say, it ran when parked. What changed? It’s been pretty wet here, and water conducts, so perhaps that was a factor?

I may try to reach out to Changli, too. After all, they kinda owe me for all the good publicity I’ve given them, after all. They even have me on their Alibaba page. They can at least hook me up with a motor controller, right? I mean, if that’s what this is.

So, right now, the Changli is just an expensive bed for my cat, Tomato: 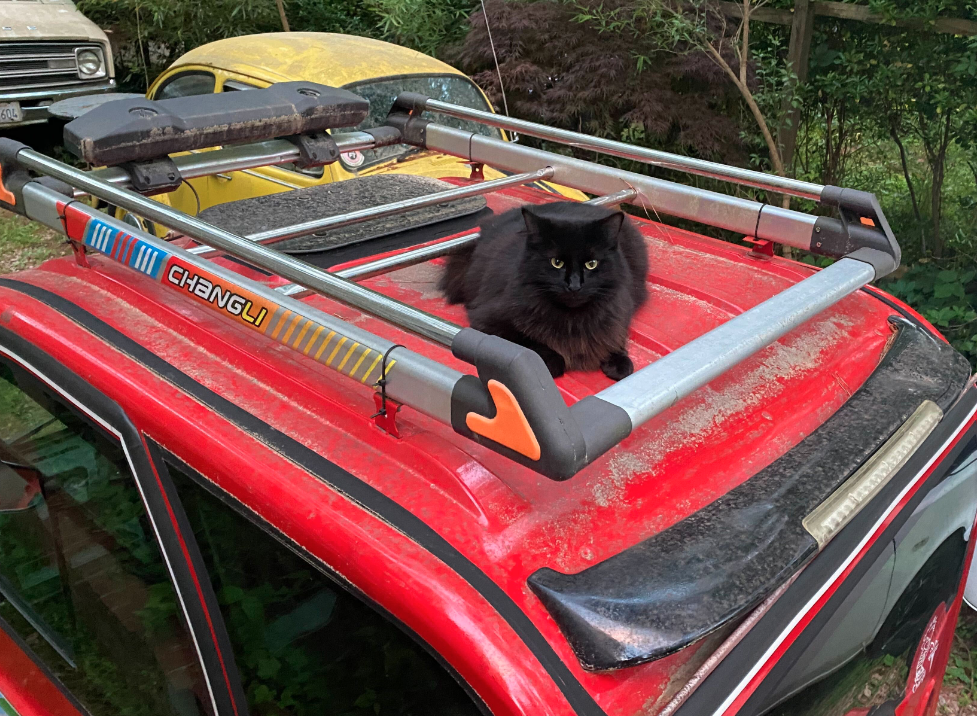 It needs to be more than that, I think. If there’s any electrical or EV engineers out there who may have an idea how to best diagnose or fix this, I’d love to know! Tell me in the comments, and if you need more pics or video or whatever, I’ll get it to you!

I use this silly thing a lot, I now realize. I want it running again!

I'm a co-founder of the Autopian, the site you're on RIGHT NOW! I'm here to talk to you about taillights until you cry and beg me to stop, which I absolutely will not. Sorry. Hug? Also, David's friend.
Read All My Posts »
PrevPrevious$130 Million Raised To Build ‘Smart Roads’ In Michigan For AVs, Pissing Off Some Silicon Valley Nerds
NextRemember The Jeep That Overheated 20 Minutes After I Sold It To A Nice Lady? Well, Its Engine Suffered Severe DamageNext