Remember The Jeep That Overheated 20 Minutes After I Sold It To A Nice Lady? Well, Its Engine Suffered Severe Damage

This sucks. It really, really sucks. I’m selling what I consider the perfect example of my favorite Jeep — a 1991 Jeep Cherokee XJ Laredo five-speed 4×4 — for one main reason: I’m tired of working on it. So it’s pretty absurd that that, after I sold it, I’m now covered in grease, tearing into the vehicle’s broken engine, whose cylinder head I just took to a machine shop to be diagnosed. What the machinist found was not good; let’s have a look.

I have so much regret. I should have taken the XJ on a long-ish test drive before selling it, because I know I would have noticed a thermal issue far before the engine overheated. The buyer — like most people who expect their cars to, you know, work — did not, and continued driving until the Jeep literally spewed steam out of its exhaust pipe and would no longer start. The result of my inaction is that, instead of just replacing a water pump in two hours, I’m rebuilding the top end of an engine. Actually, to be more precise, I’m replacing it.

This last part is news I just received from my machine shop, whose kind, towering, heavy-set foreman called me earlier today to say only two words: “It’s cracked.”

To be honest, I already knew this was the case. I have owned four Jeep Cherokees in my lifetime, and have cracked cylinder heads on all four of them. I even once wrote about how, while traveling through Colorado, I stayed an extra week to fix my best friend’s family’s XJ, whose engine, I’d been told, was drinking coolant. That ended up being a cylinder head crack as well. (Its crack is shown at the bottom of this article).

As great as the AMC 4.0-liter engine is, that long cast-iron head is unforgiving when subjected to high temperatures, and given that the Jeep Cherokee XJ was designed initially to cool only a 2.5-liter, 100 horsepower inline-four and a 2.8-liter, 110 horsepower V6, its engine bay isn’t exactly ideal for the 190 horsepower fuel injected straight six. The short, wide radiator, along with its two tiny fans (one mechanical, one electric) are just not enough to reliably keep the Jeep cool in a variety of conditions, especially if the cooling system parts aren’t in tip-top order.

Obviously, in this case, the problem had less to do with the XJ’s marginal cooling system and more to do with a water pump that leaked out all the coolant, but my point is that I’m tired of replacing 4.0-liter heads. I’d rather do just about anything else at this point. 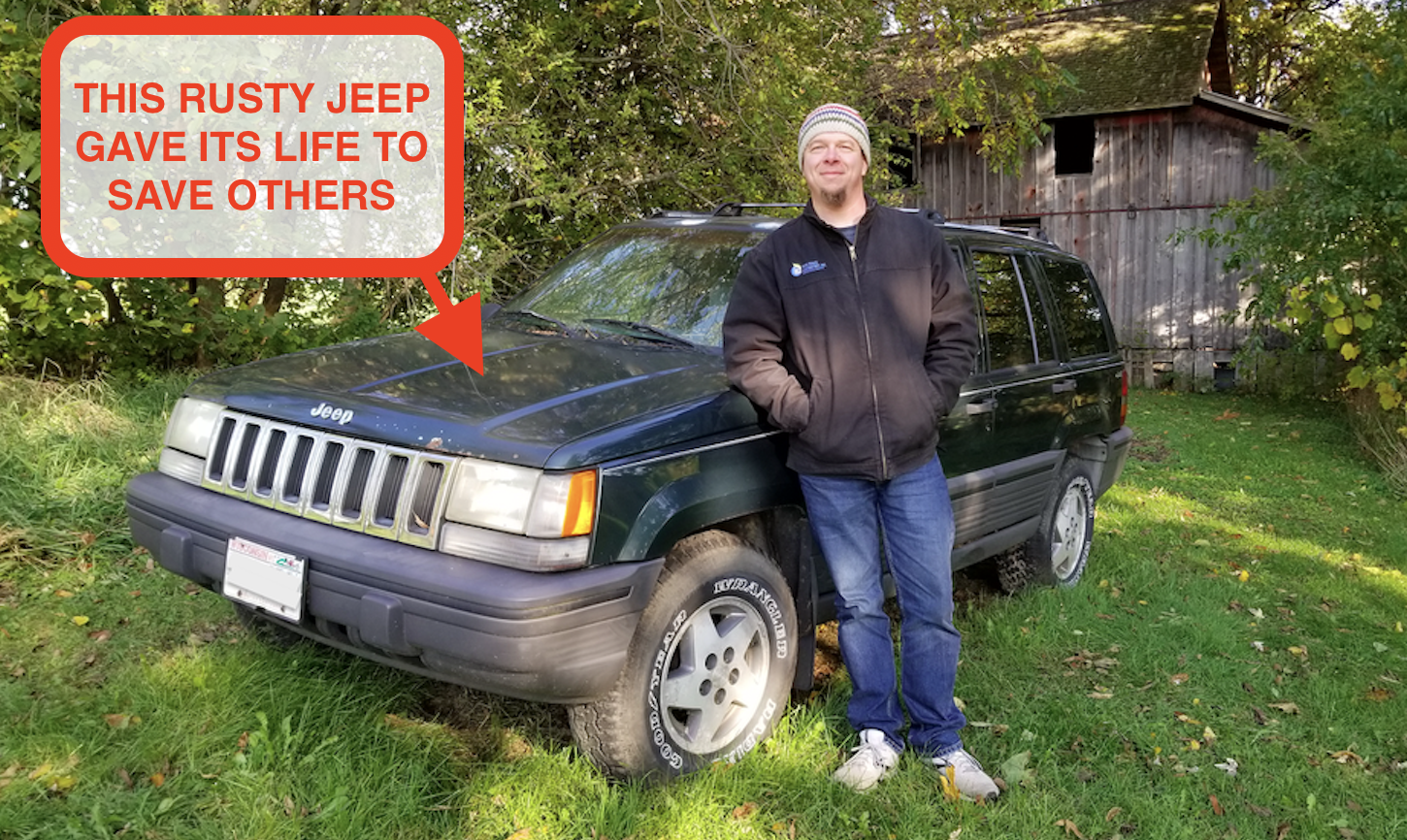 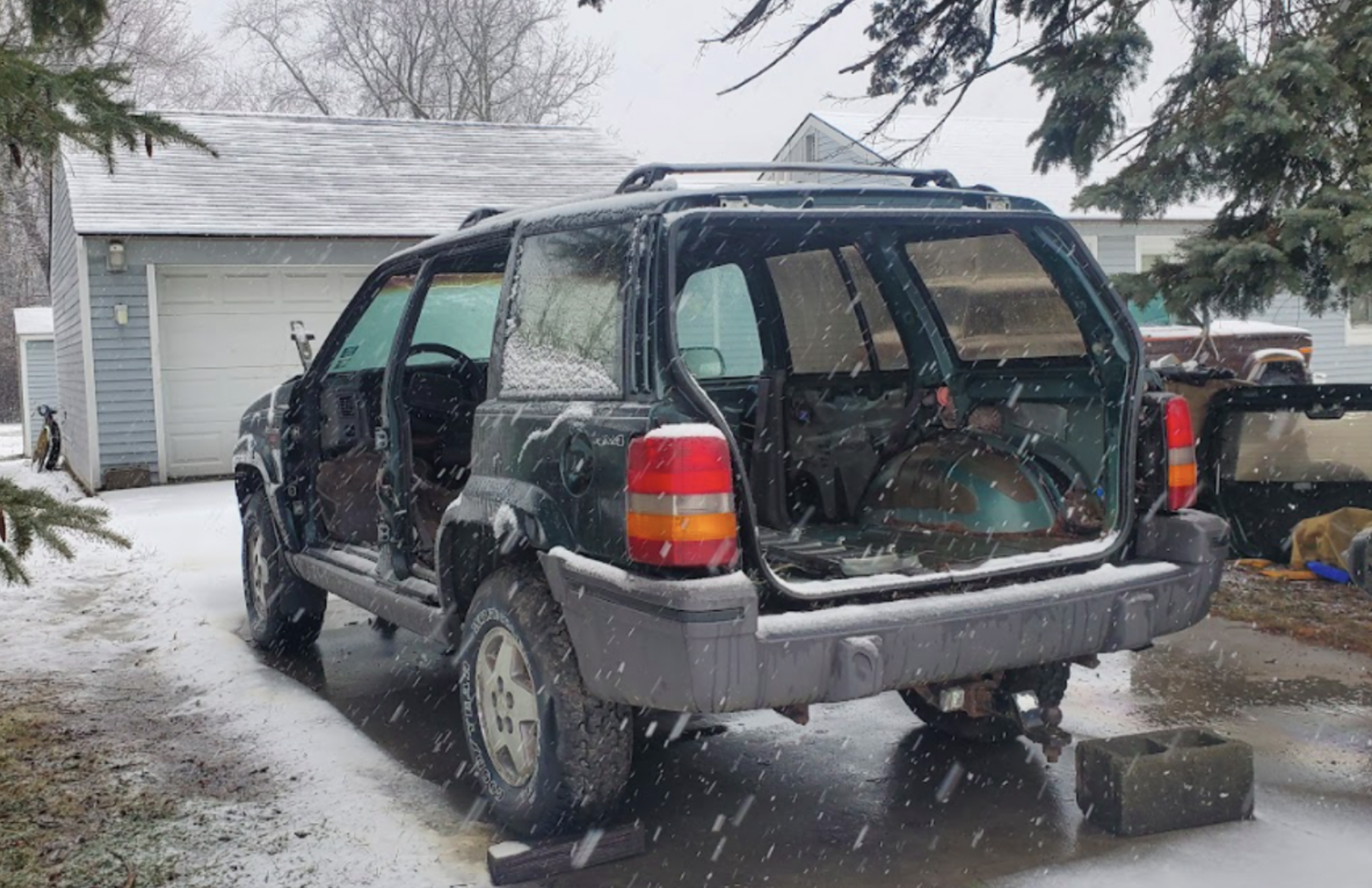 Usually I snag a new head from O’Reilly Auto Parts for about $400, but because my donor vehicle for my $350 red overlanding Jeep was a rusted-out Green ZJ with a good motor, I’ve had a spare sitting in my garage for a number of months. I zipped its cylinder head off and took it to the shop today to be checked and shaved perfectly flat; I have no doubt it will be crack-free based on the condition of the 205,000 mile engine (it’s remarkably good).

Now let’s get back to that cracked head. 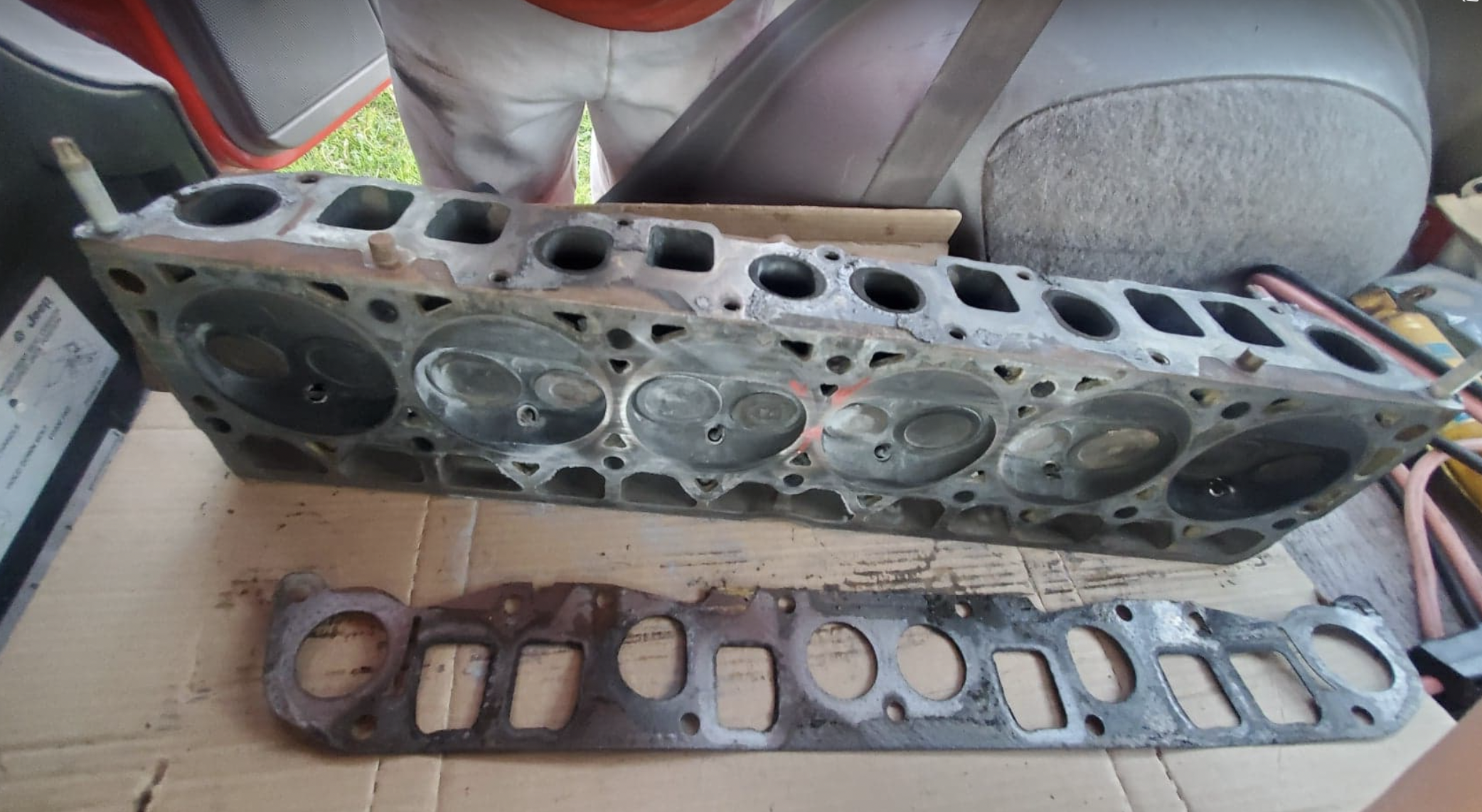 Here’s a look at the crack that the shop identified: 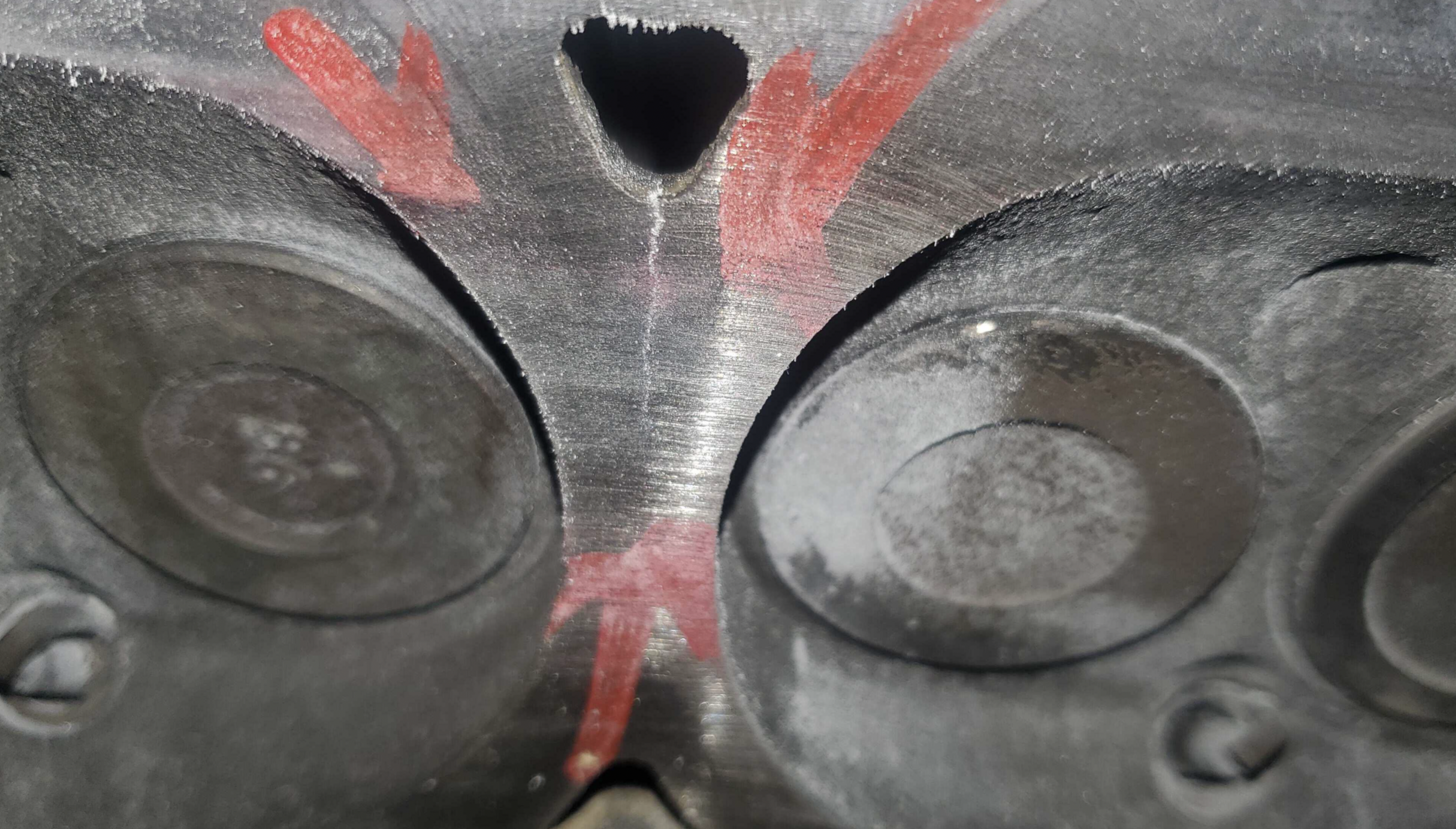 That’s pretty substantial; I mean, the fact that it’s clearly visible to the naked eye, and that it’s over an inch long tells me that this engine got very, very hot.  What I find interesting is that the crack propagated between two cylinders; my previous experience with a cracked 4.0-liter head in my friend Bobby’s Jeep involved a crack forming between two valves of the same cylinder: 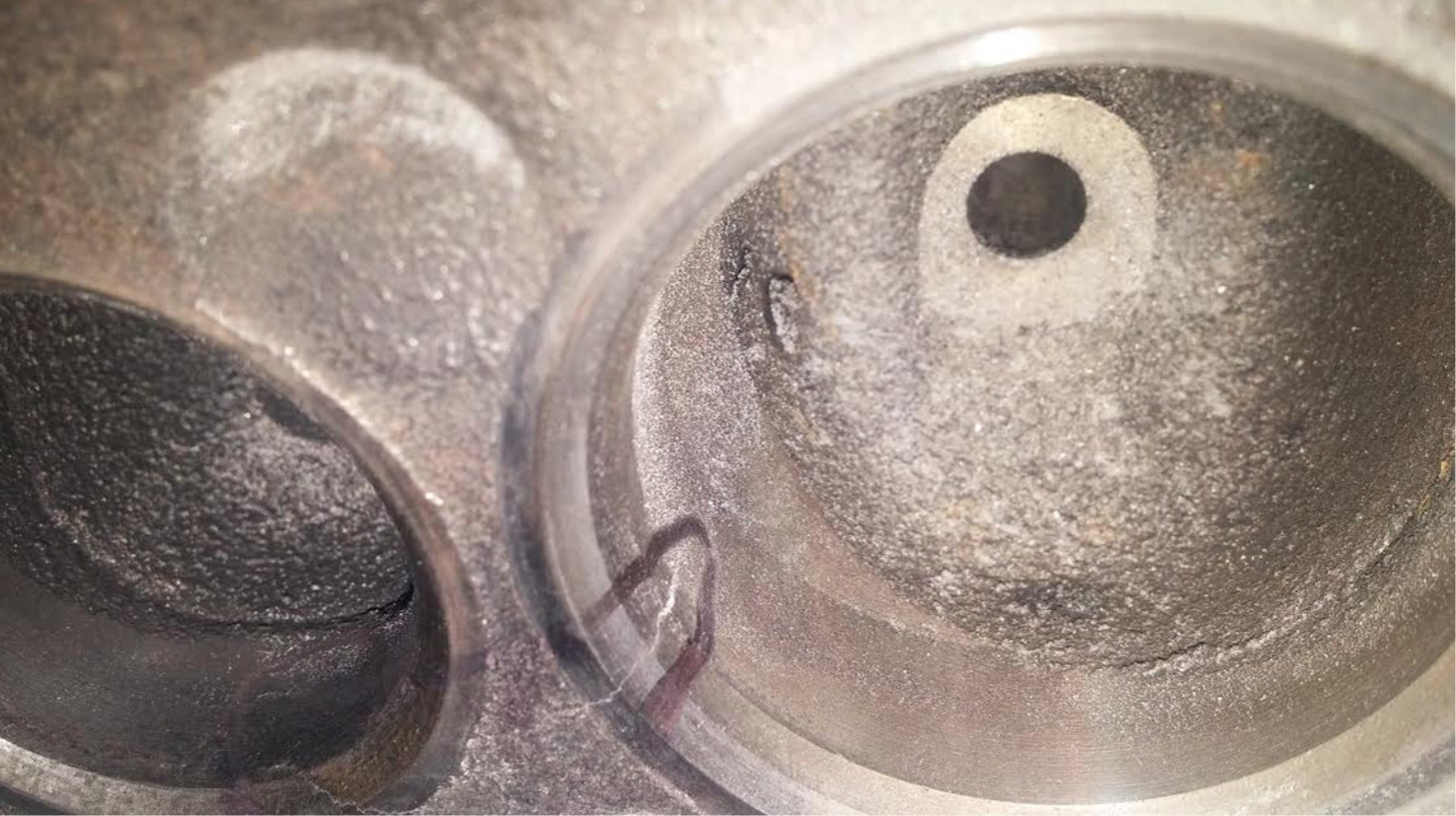 What a nightmare scenario for all involved, really. You sell a car after spending years replacing its entire front suspension, front fender, fender flare, fender liner, rear bumper, front bumper, driver’s seat, ECU, power steering pump, front axle vacuum disconnect motor, radio, and on and on — you’re certain that finally, after all of those fixes, the car is worth enough to be sold for at least a small profit. You didn’t buy it to sell it, of course; you wanted to keep it forever, but it’s been too much of a hassle, and now just want it out of your hair. Then finally, you find a buyer, who drives away and then 20 minutes later — boom: You’re stuck fixing the Jeep yet again.

I truly believe that, if a car has been unreliable enough, it will feel like it’s betrayed you, and you’ll fall out of love with it. That happened long ago between me and what I once thought was the most perfect Jeep on earth. I want it out of my life.