My lifelong hunt for the perfect Jeep has led me to declare both the manual Jeep Grand Cherokee ZJ and the Jeep Wrangler TJ Unlimited “Holy Grails” of Jeeps, so I understand if I’m starting to look a bit like the boy who cried “wolf!” But hear me out just one more time, because I recently learned about something incredible while here in Australia: It turns out that, down under, Jeep Corporation sold a version of the Jeep CJ-8 Scrambler that fixed what I always considered the World War II Jeep and its successors’ biggest packaging flaw: the seating arrangement.

The World War II Jeep was an engineering triumph when it entered production in the early 1940s; it was small, could drive over any obstacle, tough, easily serviceable, and cheap and easy to build. You’ll never hear me decry that legendary machine, because it truly was revolutionary, setting the foundation for what would later become the most capable four-wheel drive vehicles to ever grace the earth — vehicles like the Toyota Land Cruiser and Land Rover Series I, both of which were developed using the Jeep as the benchmark.

Here’s the thing about those Jeep-inspired off-road legends that has always puzzled me: For some reason, both Toyota and Land Rover understood that a single, cross-car-oriented rear bench was a packaging waste, so they fitted longitudinally-mounted benches on the wheel wells. The World War II Jeep, which I’ll note beautifully fulfilled the occupant/packaging requirements defined by the U.S. government as it set out to commission a nimble wartime runabout, featured storage bins in those squared-off wheel humps. Check them out:

But the civilian version of the World War II Jeep, the CJ-2A, deleted the bins to reduce cost, so the space above the wheels was essentially wasted, and overall occupancy was limited to four; this remains to this day, with every generation of CJ and two-door Wrangler featuring at most two horizontally-mounted benches. 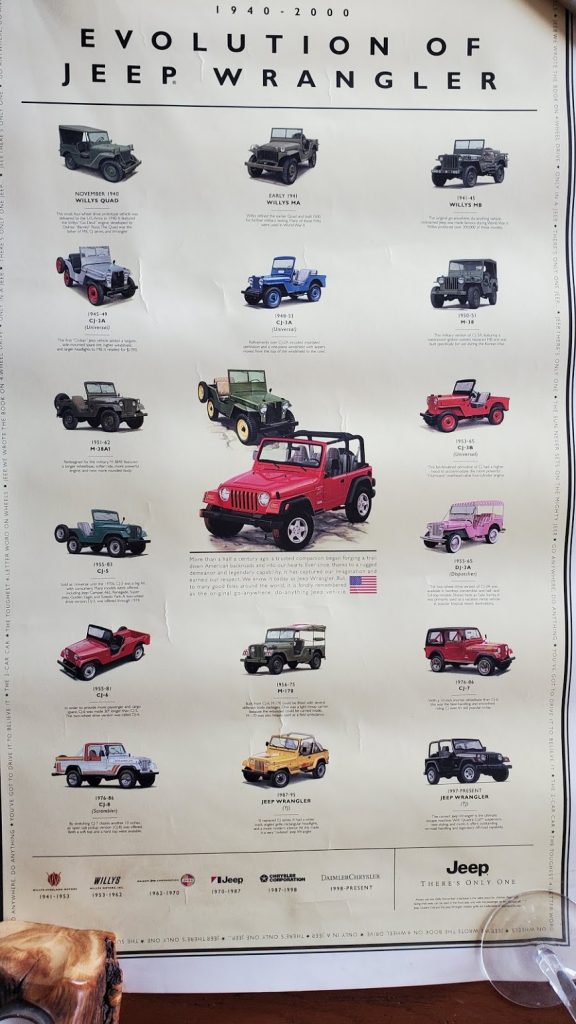 Okay, I will note that there’s lots of discussion on messaging boards about “Longitudinal Seats” being a factory option for CJ-5s and CJ-6s for some amount of time, though it’s not clear when, and it’s not clear how many actually made it to customers. They’re extremely rare; 99.9 percent of Jeep CJs and two-door Wranglers only had seating for four, or in some (also rare) cases, five thanks to a front bench:

The Land Rover Series 1, on the other hand, could carry seven (a bench up front, two benches in the rear, each of which could carry two), and early Toyota Land Cruisers like the FJ were right up there with the Land Rover, utilizing the space above the rear wells as seats. This, to me, has always made perfect sense, even if it does require a bit of a raised rear roof.

And yet, Jeep has never offered — in high volumes — a longitudinal seating configuration on a CJ or Wrangler model — or at least, so I thought. While browsing local Australian Jeep sale listings, I happened across the “Jeep CJ-8 Overlander,” a special version of the Australia-only CJ-8 Wagon, which shares the bones of the CJ-8 Scrambler pickup sold stateside between 1981 and 1986 (the CJ-8 was a CJ-7 with about two feet extra length — 10 inches in the wheelbase, the rest in the rear overhang). Here’s the two-seater Scrambler truck that you may be used to occasionally seeing in the U.S.: 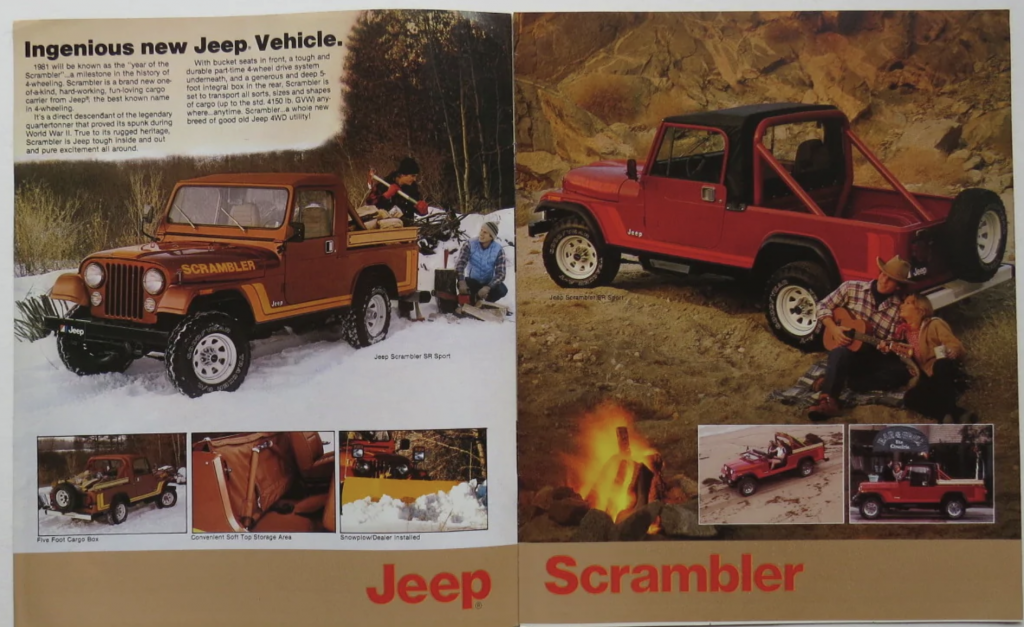 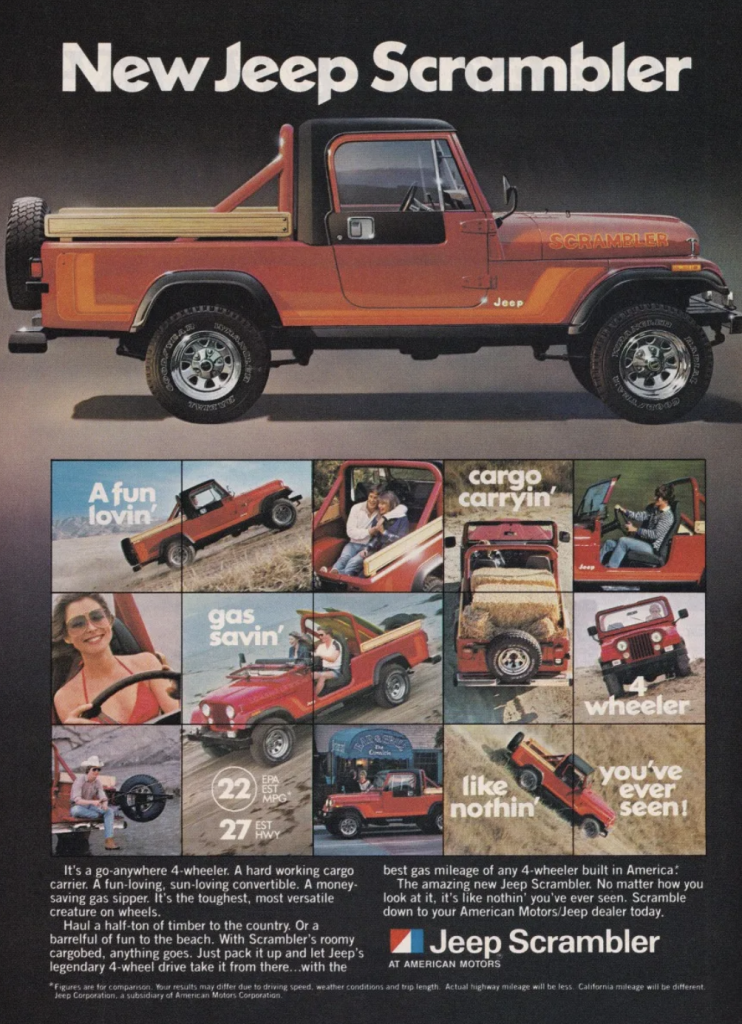 And here’s the Australian Jeep Overlander: 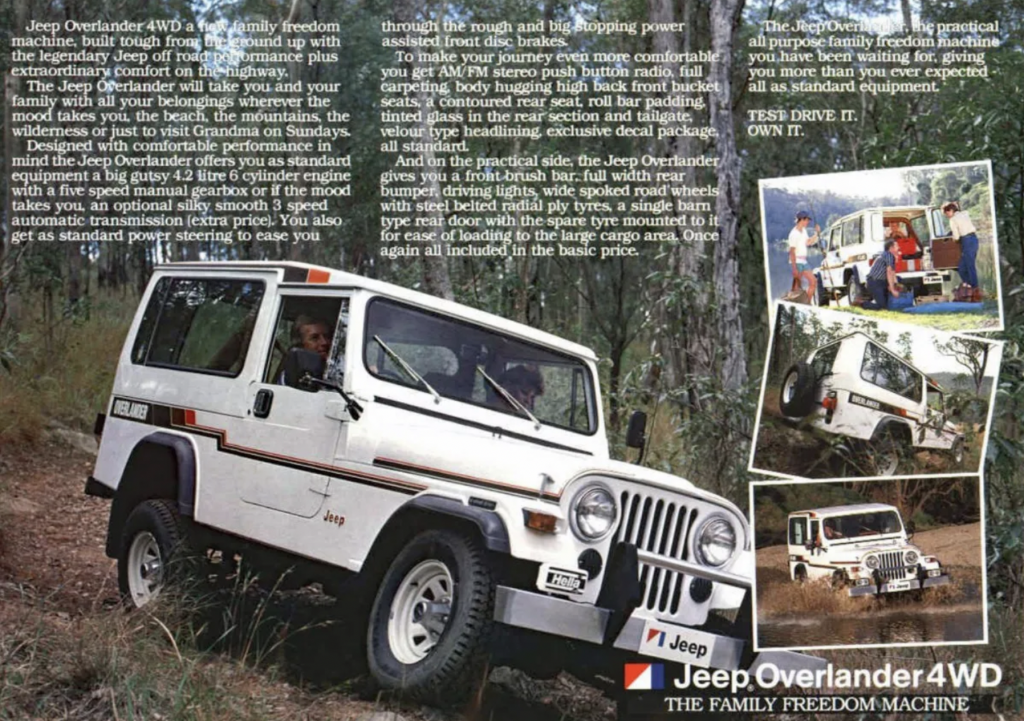 How awesome is that? Australians could get the unkillable AMC inline-six bolted to a five-speed stick (a T5 if I had to guess), along with four-wheel drive and lots of space and seating. That “Overlander” name seems appropriate, because this thing seems like the ultimate long-distance off-road Jeep.

Don’t let the above brochure’s mention of just a single rear seat fool you; the Australian CJ-8 Wagon (the Overlander was a special version of the wagon) did indeed bring longitudinally-mounted benches to the rear cargo area. Look at the rear occupants in these photos: 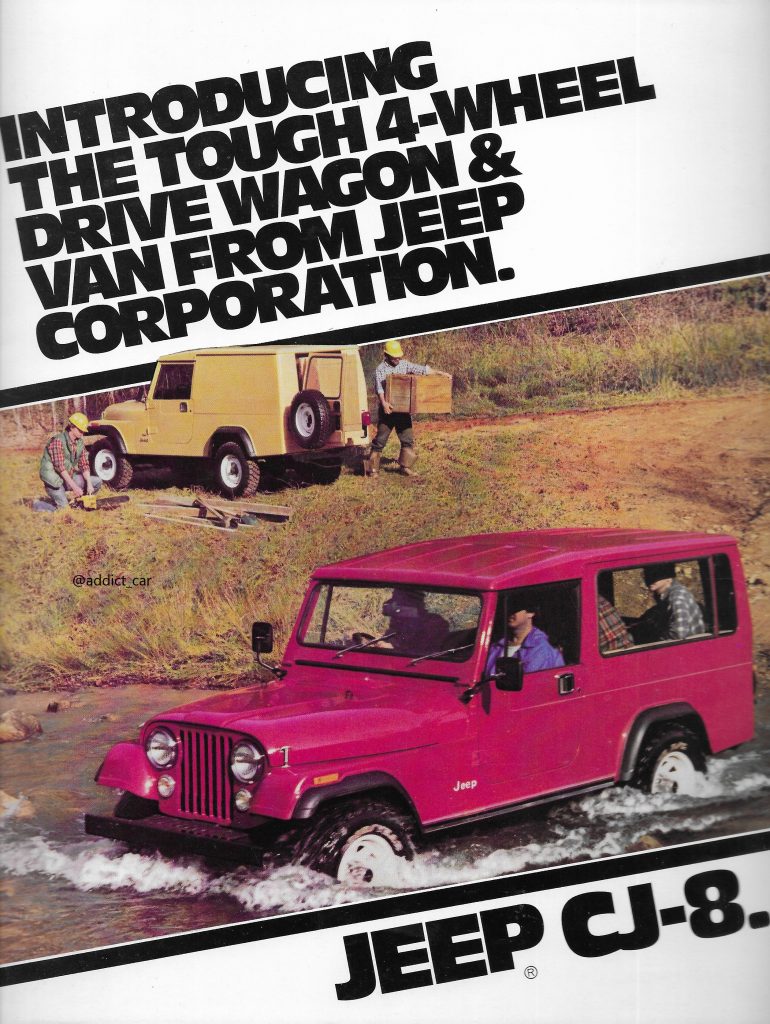 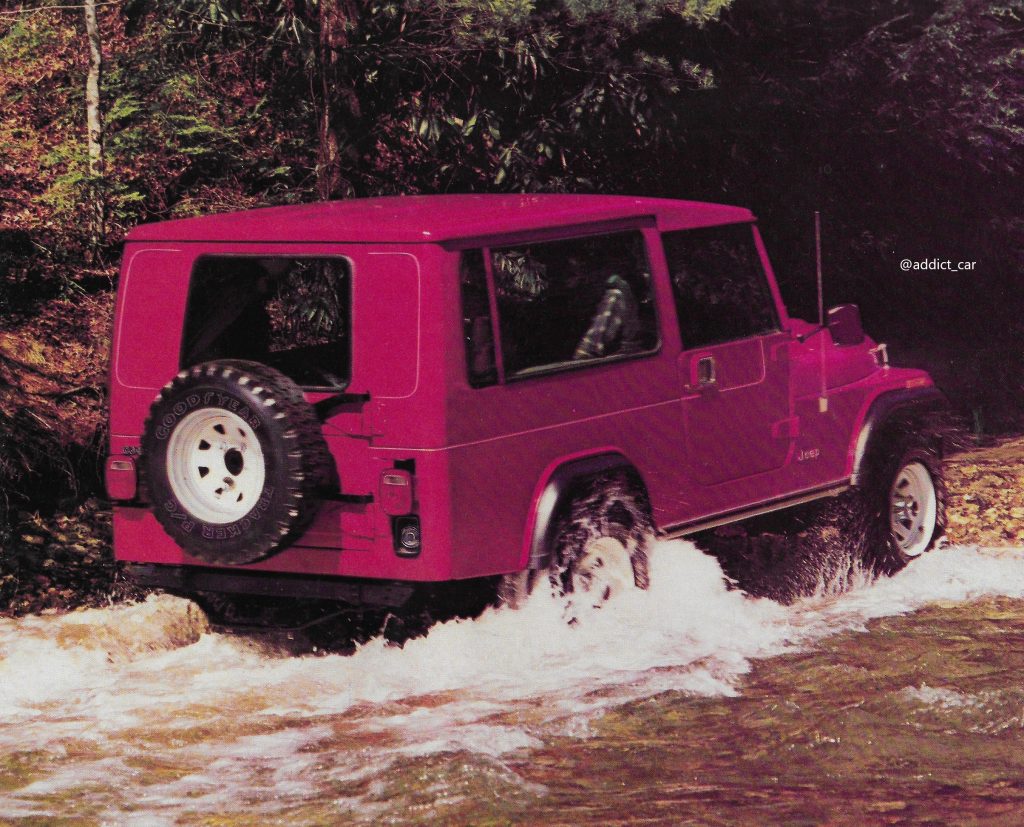 The advertisement containing the photos above states: “Now look at the Jeep CJ-8 Wagon. Its 4-wheel drive ability lets it tackle driving and weather conditions that immobilize ordinary cars and trucks. Yet, it also accommodates eight adults comfortably with its available longitudinal seating.”

Eight adults! This thing is a certifiable troop-carrier!

To the Jeep-obsessed out there, the Australian CJ-8 Wagon’s roof may look familiar. It’s called the “World Cab,” and it could be found in some Alaskan mail carrier vehicles. From Curbside Classic’s article on the Jeep Scrambler:

CJ-8 bodied Jeeps were produced both in Australia (sold as the Overlander) and Venezuela – with both countries receiving a fixed hard top version dubbed the “World Cab” by Jeep. World Cab CJ-8s were never sold to the North American public, though the US Postal Service purchased 230 right-hand drive examples for rural Alaska mail delivery vehicles.

Every now and then one of those Alaskan mail carriers will pop up for sale, unsurprisingly oftentimes in rather rusty condition, like this eBay listing from earlier this year that Barnfinds wrote about:

There were some military “Jeeps” over the years could seat lots of people, like the Kaiser M715, Willys FC-based troop carriers, and even the M-170, which really isn’t much different than the CJ-8 Wagon structurally, especially not aft of the A-pillars:

But in the civilian world, it took Jeep until the 2006 model year to offer that kind of seating, and it was in the Jeep Commander — a vehicle could seat seven miserable people (the Commander is known for having been allegedly referred to as “unfit for human consumption” by the late FCA boss Sergio Marchionne). It wasn’t until the 2022 model year that Jeep offered a vehicle in the U.S. that could match the Cj-8 Wagon’s eight-person occupant capacity: the Wagoneer. But never has there been a truly off-road capable convertible civilian Jeep sold in high volumes that could seat more than five people comfortably, and I’ve always considered that a major oversight and an area where Land Rover and Toyota had an advantage. And you should realize how difficult it is for me to say that.

For the 2007 model year, Jeep debuted the four-door Wrangler, which brought convertible off-road capability to the masses. In many ways, the four-door JK and its successor, the current four-door JL, are known as the “family Jeeps,” though in my eyes, the ultimate family Jeep is Australia’s eight-passenger CJ-8 wagon. If somehow I end up with a bunch of kids, I’ll be looking for a CJ-8 wagon to join my diesel Chrysler Voyager minivan. Because rock crawling with eight people just sounds fun.

Rust-loving Jeep man, cofounder and EIC of The Autopian, Jason's friend. Email: david@autopian.com
Read All My Posts »
PrevPreviousThe Full History Of The Most Famous Microcar, The BMW Isetta
NextThis Car Is Good Because You Cannot Get ItNext