In the Taillight Subculture, side marker lamp fetishists, commonly known as Markies or, sometimes Posties, after the late Night Court castmember Markie Post, are usually treated as second-class citizens. Personally, I think this is unfair, as I’ve often defended side marker lighting as the unsung hero of automotive lighting, and it’s also the form of automotive lighting that bridges both the front and rear of a car, bringing together the Headlamp Community, the Indicator Alliance, and the Taillight Subculture. I realize that most automotive websites avoid writing about side marker lamps out of fear of reprisals from the various special-interest automotive lighting factions, but here at the Autopian, we write without fear. That’s why I’d like to highlight an unexpected hero of the side marker world: Jeep.

Just in case you’ve misplaced your copy of Federal Motor Vehicle Safety Standard (FMVSS) number 108 or SAE Standard J592e or your tattoo of either of these texts has become blurred, scarred, or otherwise illegible, let me remind you about what America requires regarding side marker lighting of cars.

I’ll just paraphrase, to keep things simple: Starting in 1968, cars were required to have either lights or reflectors at either end of the sides of the car, amber for the front, and red for the rear. This would be updated in 1970 to require both lights and reflectors.

If you’re still not convinced of the utility of visibly marking the sides of cars, perhaps you’ll listen to what the National Highway Traffic Safety Administration (NHTSA) said about them in a July 1983 report:

The objective of side marker lamps is to make a vehicle visible from the side to drivers of other vehicles, at night or at other times when there is reduced-visibility including dawn and dusk [sl, p. 5-13]. The advance warning provided by the lamps has the potential to enable drivers to avoid a collision when approaching one another at an angle, at night. The purpose of locating the lamps as close to the ends of the vehicle as possible is to reveal its length; the purpose of making the front lamp amber and the rear lamp red is to reveal the vehicle’s direction of travel.

Early side marker lamps were often small and quite stylish, like the legendary Firebird marker lamps used by Pontiac in 1969: 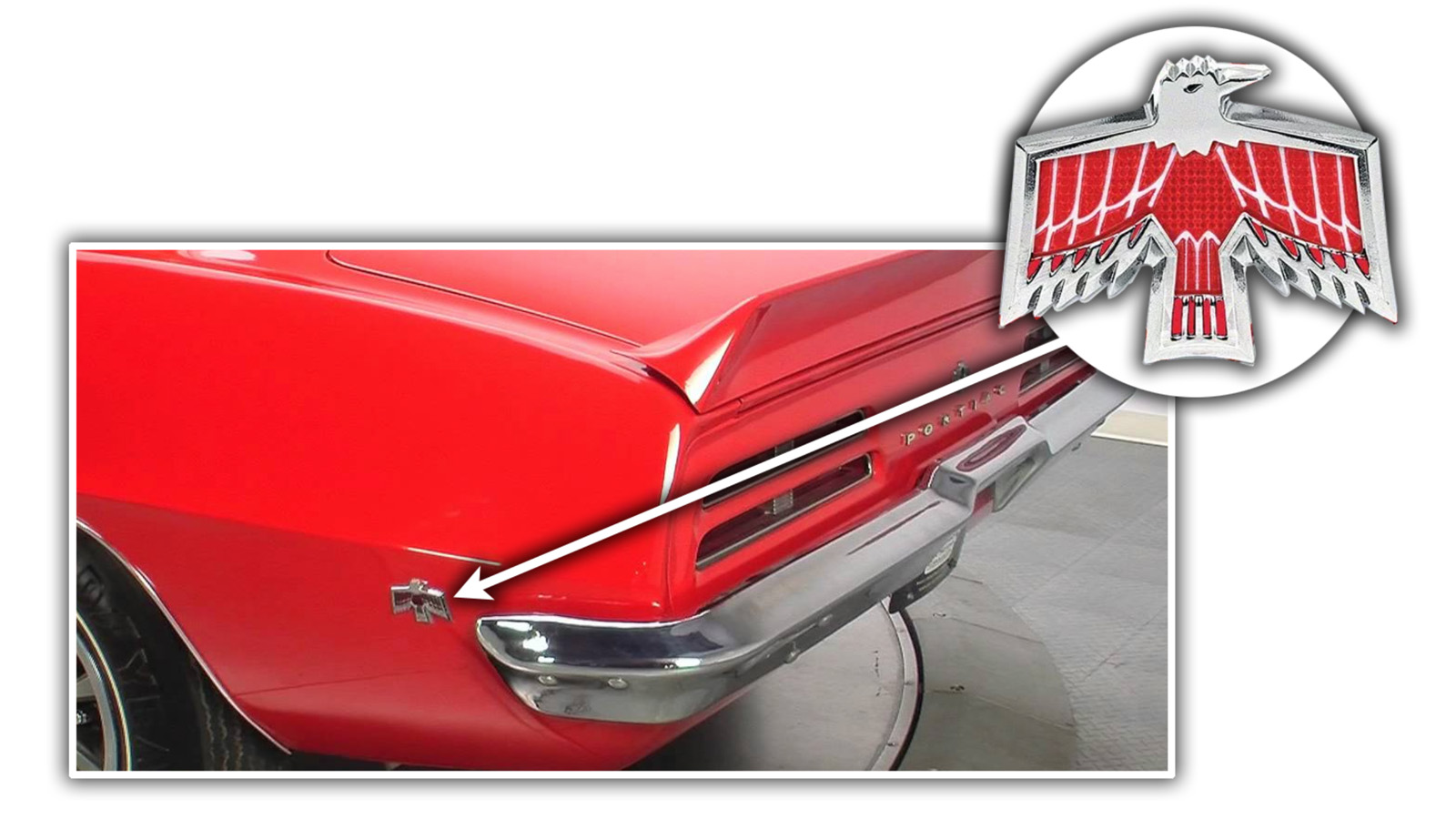 This marker lamp is still discussed with hushed tones of reverence in the Markie community, and justly so. As I mentioned earlier, by 1970, the rules were revised so that both lights and reflectors were required at each end. Markies generally don’t discriminate between the types of side marking, and while the self-illuminating variety tend to be better known (and are technically the only type to deserve being described as “lights”) the reflector-based solutions are important as well, and are specifically what I’d like to focus on now. 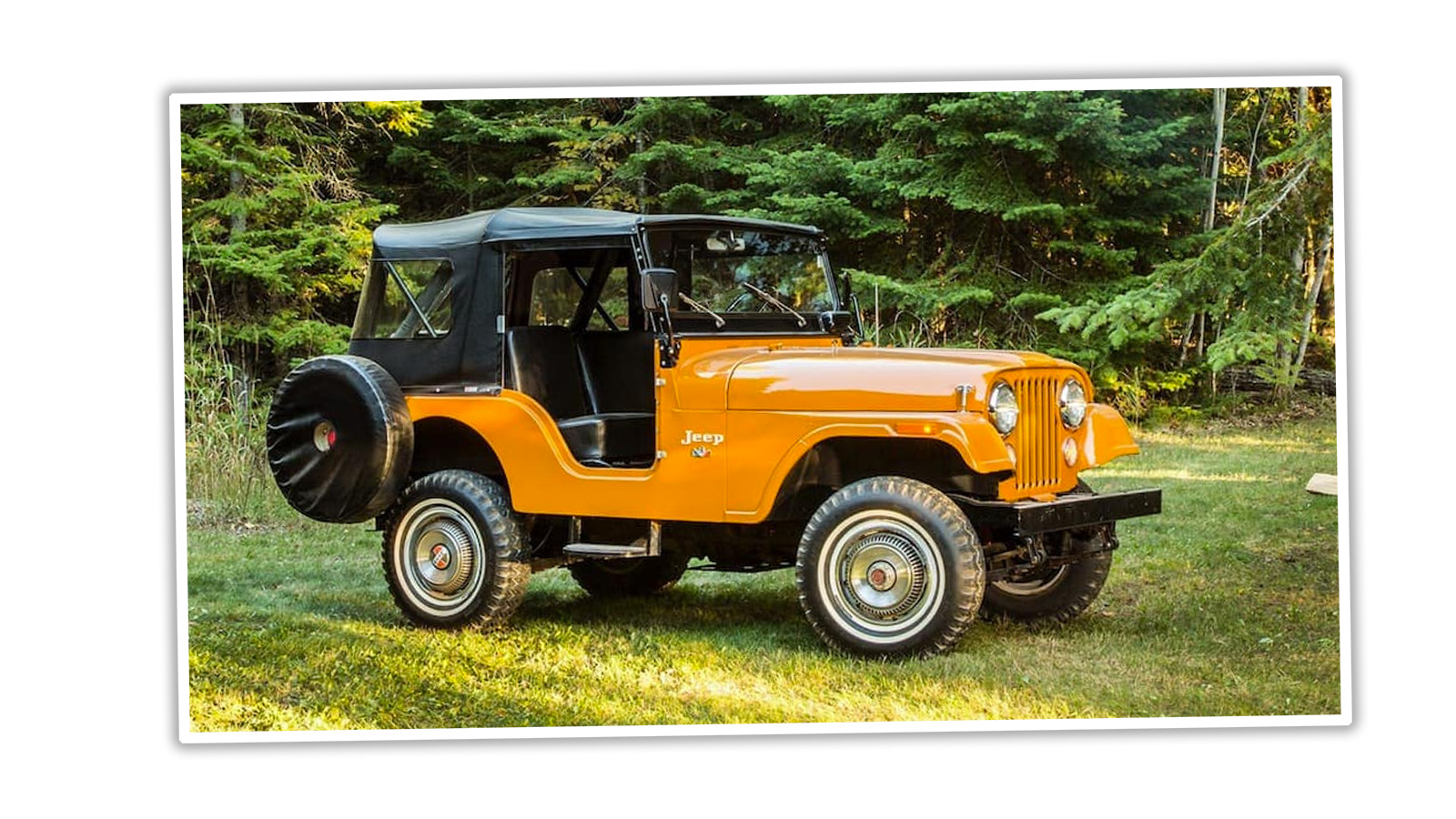 See that? That’s a Jeep CJ-5. According to Jeep themselves, it’s a 1965 Jeep CJ-5, but I’m not sure if I think that’s entirely accurate – or, if this is a 1965, it’s been updated to have front side marker lamps in the fender that seem to have been introduced in 1970.

From what I can tell, for front side marking, Jeep started in 1969 with reflectors mounted to the sides of the hood, like this: 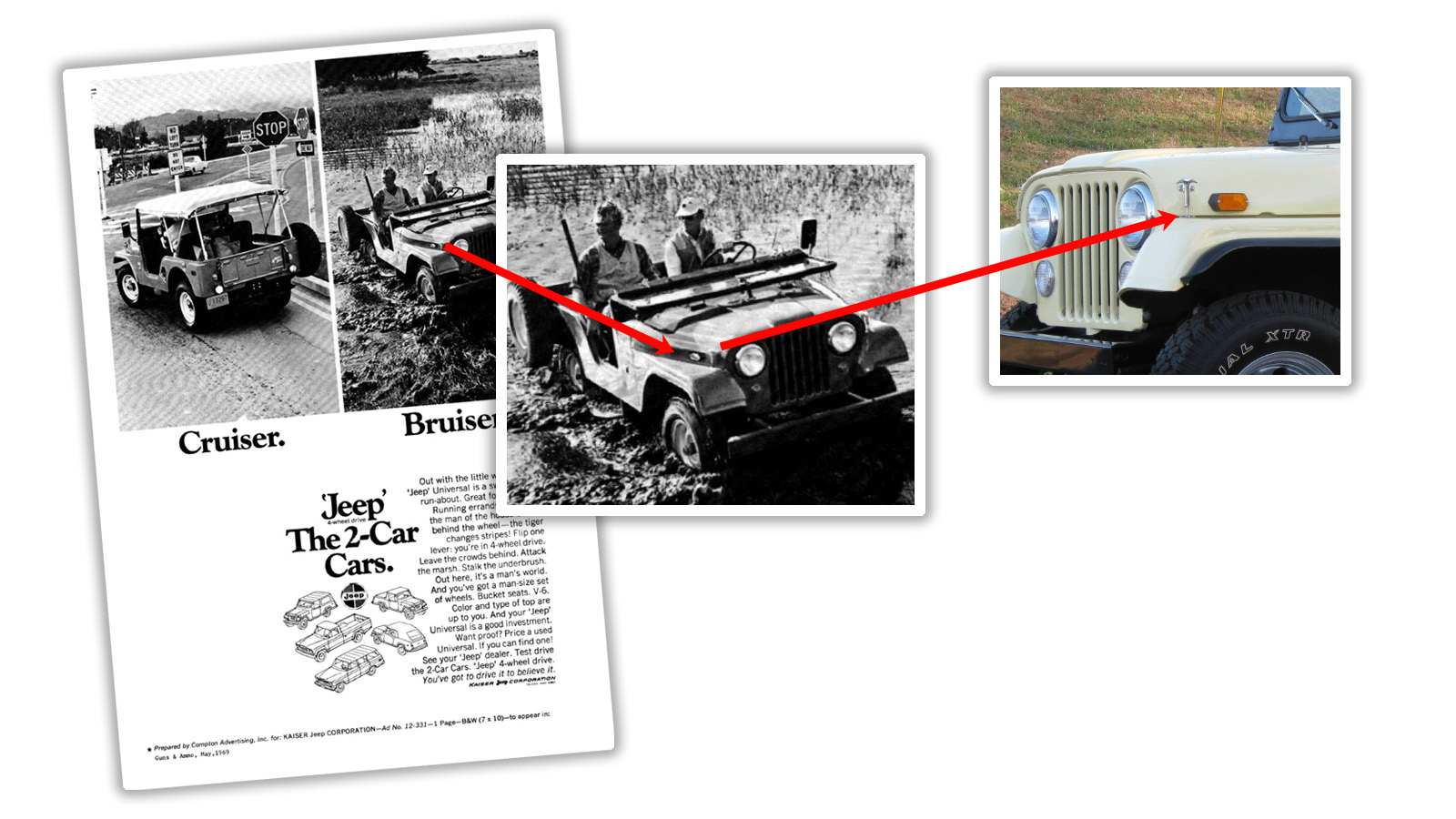 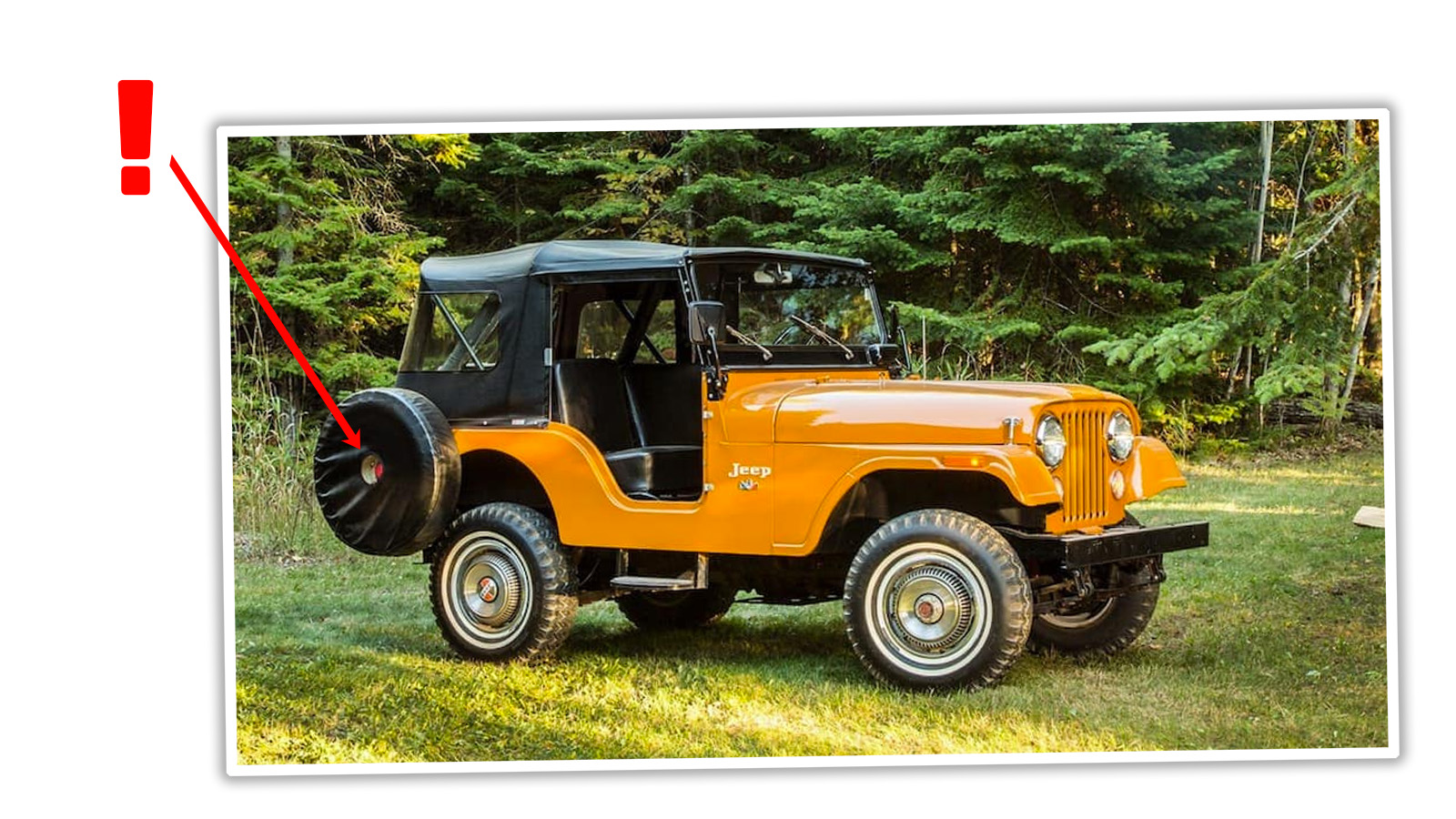 Okay, everyone just take a moment to breathe. Stay calm. I understand how you’re feeling: a mix of excitement, wonder, and perhaps a touch of arousal. This is all normal. But we have to focus. 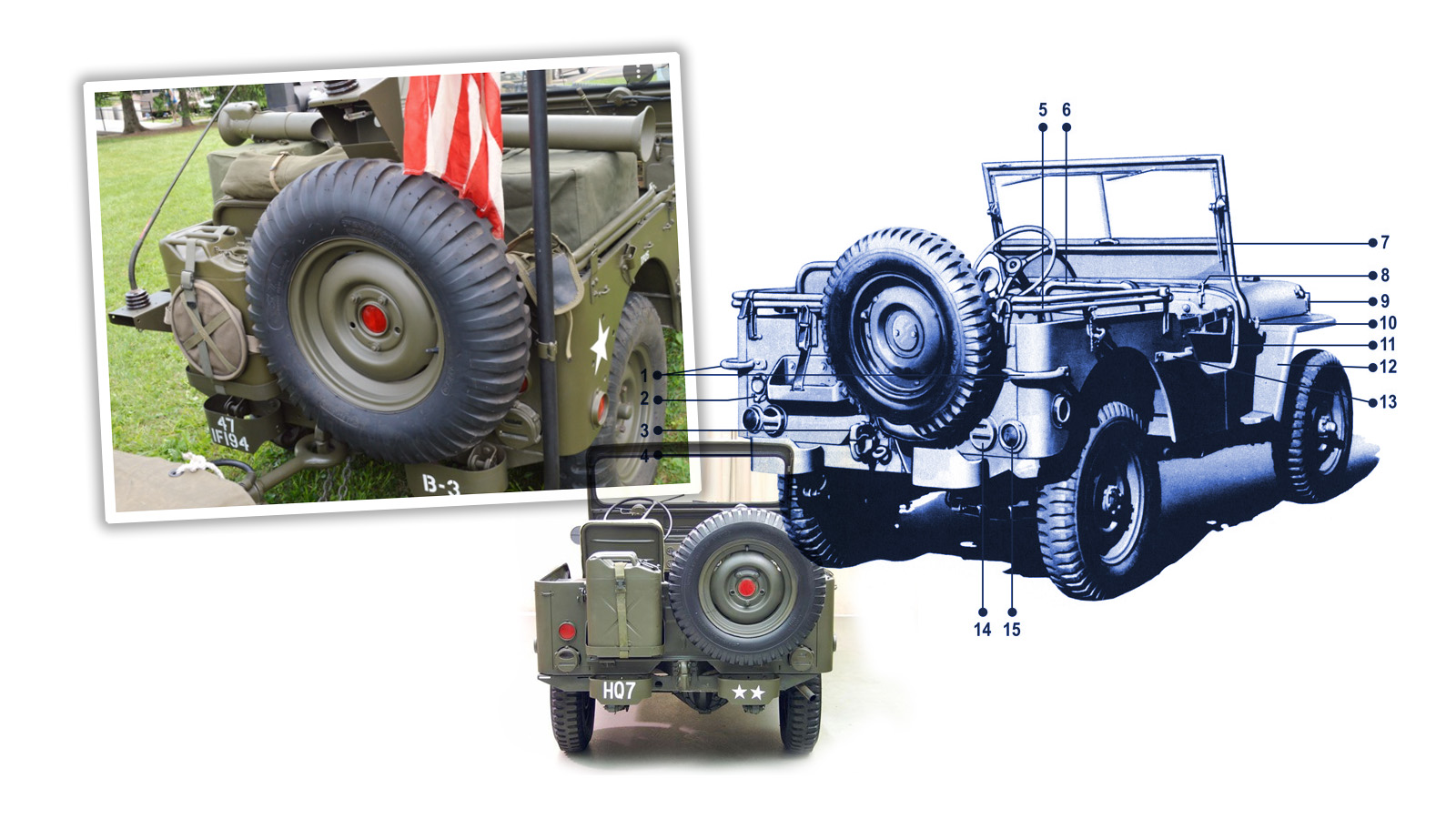 From what I can tell, Jeeps have been marking their sides at the rear with red reflectors since 1941, making them in all likelihood the first automobiles to have deliberate and obvious side marker hardware of any kind!

Jeeps are hardly rare and are some of the best-recognized vehicles of all time, so the fact that they haven’t been singled out for this important milestone is a bit baffling to me.

With this in mind, it’s not surprising that the CJ-5 with the side-mounted spare tire would take such pains to be sure that red reflector was visible; this has clearly been a quiet but consistent priority for Jeeps for decades.

It’s amazing how, sometimes, you can realize something new about a familiar car that makes you see it in a whole new light. I’m surprised Jeep has been sleeping on this milestone, and I sincerely hope that soon we’ll see a special edition of the Jeep Wrangler that really celebrates this with some sort of oversized or enhanced rear side marker lights. Maybe a special Wrangler Rear Side Marker Pioneer edition is in order?

Stellantis and Jeep, you know how to get ahold of me.

I'm a co-founder of the Autopian, the site you're on RIGHT NOW! I'm here to talk to you about taillights until you cry and beg me to stop, which I absolutely will not. Sorry. Hug? Also, David's friend.
Read All My Posts »
PrevPreviousThe 2024 Chevy Equinox EV Is A Lot of Electric Car For $30,000
NextThe Kollter RS1 Wants To Give You Lots Of EV Bike Range For Less MoneyNext