When I was a kid, living in the grim, strange, pre-internet society, one of my favorite things was when a human being dressed in a uniform and driving something our own David Tracy got harassed by cops in would come to our house and provide us with the equivalent of a bunch of websites, in physical form. Mail. Bills, letters, magazines, wads of dog shit wrapped in newspaper (that maybe wasn’t actually mailed, our neighbors just weren’t fans) and best of all, JC Whitney catalogs. To a Volkswagen-obsessed kid like me, these were gold, full of all the crap I could dream about adding to my own Beetle one day. I saw Beetles with JC Whitney crap on them all the time, but now that I look back on these catalogs, I see some strange things I never saw in the wild. Let’s look at a few of those.

JC Whitney itself is sort of an amazing thing: they still sell car parts online to this day, and they started way back in 1915 as a scrap metal yard run by a Lithuanian immigrant named Israel Warshawsky. His son realized catalogs could be a big thing, and actually sold catalogs for a quarter starting in 1934, and then kept cranking out these massive newsprint tomes of car parts for decades and decades.

The stuff a well-adjusted normal human might consider “weird” in these catalogs was actually quite common, like the fake Rolls-Royce hoods and Continental engine lid kits and the grossly misshapen tragedies of fiberglass that were all sorts of alternative hoods and body panels: 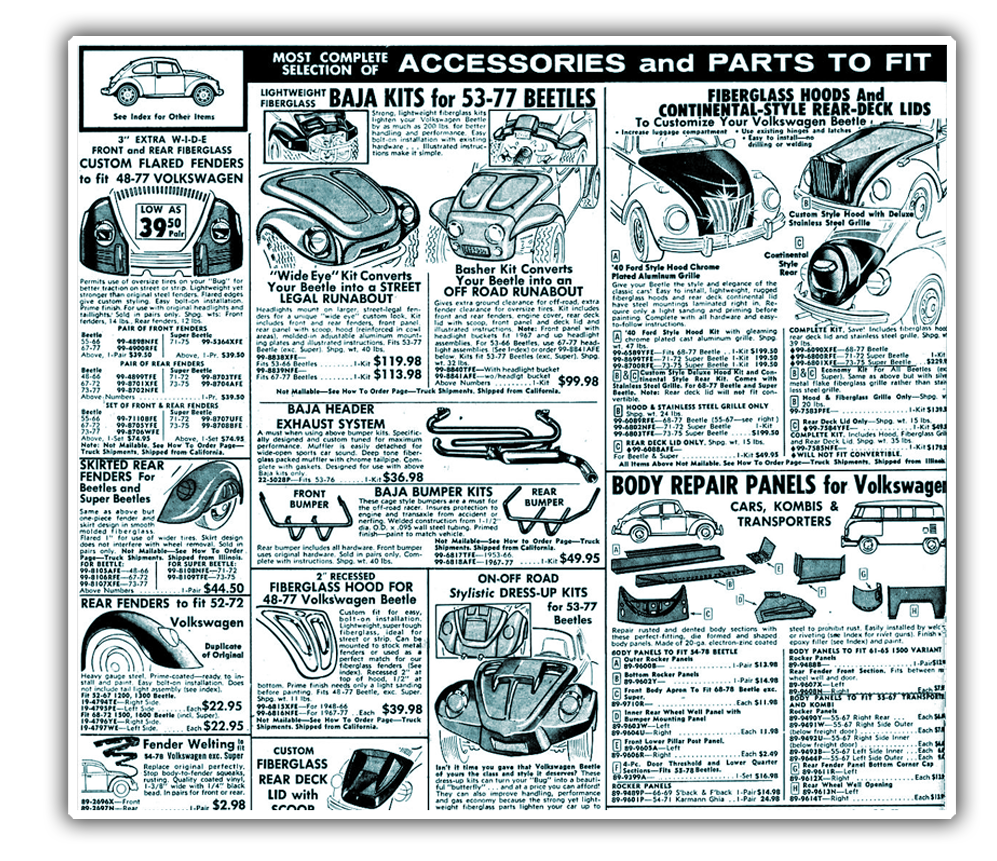 These you could see anywhere, usually in their natural primer gray state. But as I look through these old catalog pages (helpfully scanned and up at thesamba.com) I see some things I’ve literally never seen in the wild, and I’ve been actively looking for at least four decades. Like this: 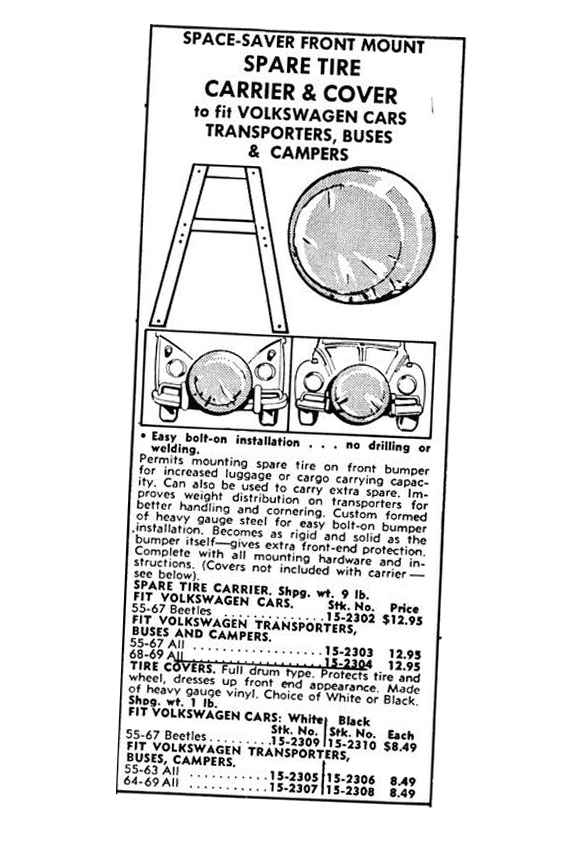 Sure, on VW Buses, I saw that front spare tire carrier plenty. At least half the buses in the wild had them, and they made a lot of sense: free room up inside, add a tiny bit of crash protection, all that. But on a Beetle? Never saw it.

Nobody was mounting their spare on the front bumper of a Beetle. I’m not sure why you would – sure, you’d free up a strange, narrow, vertical space inside the trunk where the tire once lived, but you’d lose your windshield washer (just follow the link) and the trunk would be hard to get to and I bet your fuel economy would be worse. I never saw this. 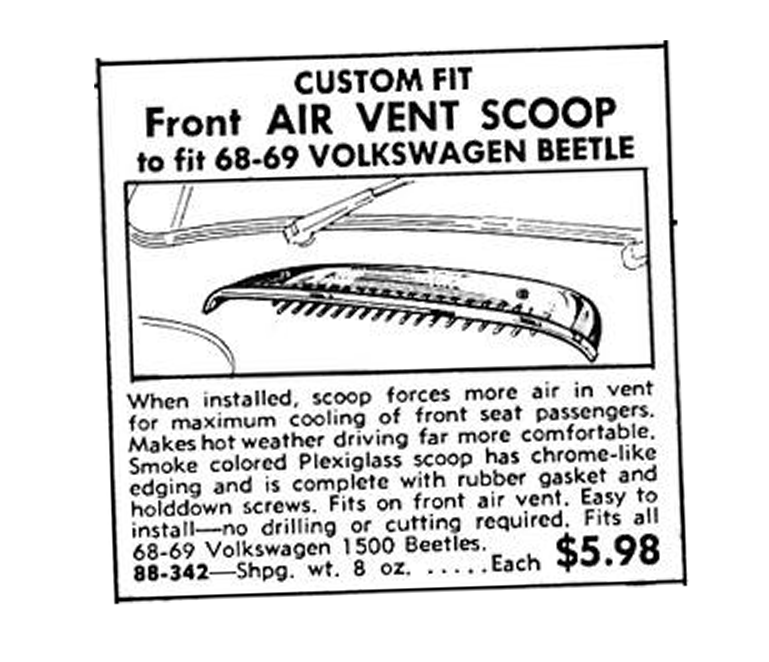 Okay, these I actually saw plenty, but I’m only including them because I always thought they were kinda silly. That vent just fed the interior air ventilation system, but so many Beetles had that air box gone or broken that I bet about half of these just pumped air into the trunk. Even with the fresh air system in place, I’m not really sure these would have done that much when you could just crack the vent window and get all the air you need? I don’t know, maybe someone liked these. 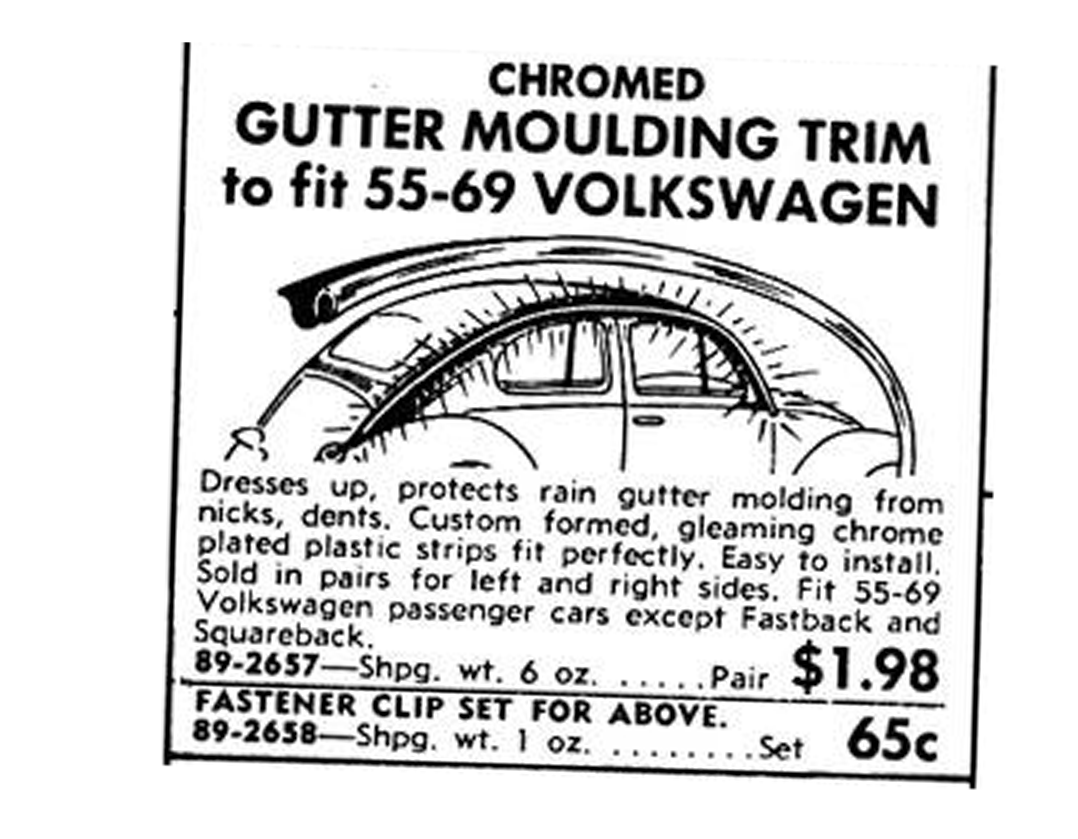 Here’s something that I literally have never seen on a Beetle in the actual world: rain gutter bling. I’ve seen lots of chrome aftermarket whatevers slapped onto Beetles, but so far I’ve never seen a Beetle with these massive gleaming arches tooling around any town, anywhere. I mean, I’d like to! They seem bonkers.

If you’ve ever owned a Beetle, but always hated the fact that when your battery died, you could still open the trunk and get out whatever is in there, then boy does JC have you covered: an electromagnetic hood lock! Now you can get locked out of your trunk and any access to your jumper cables when your battery dies! For minimal benefit! 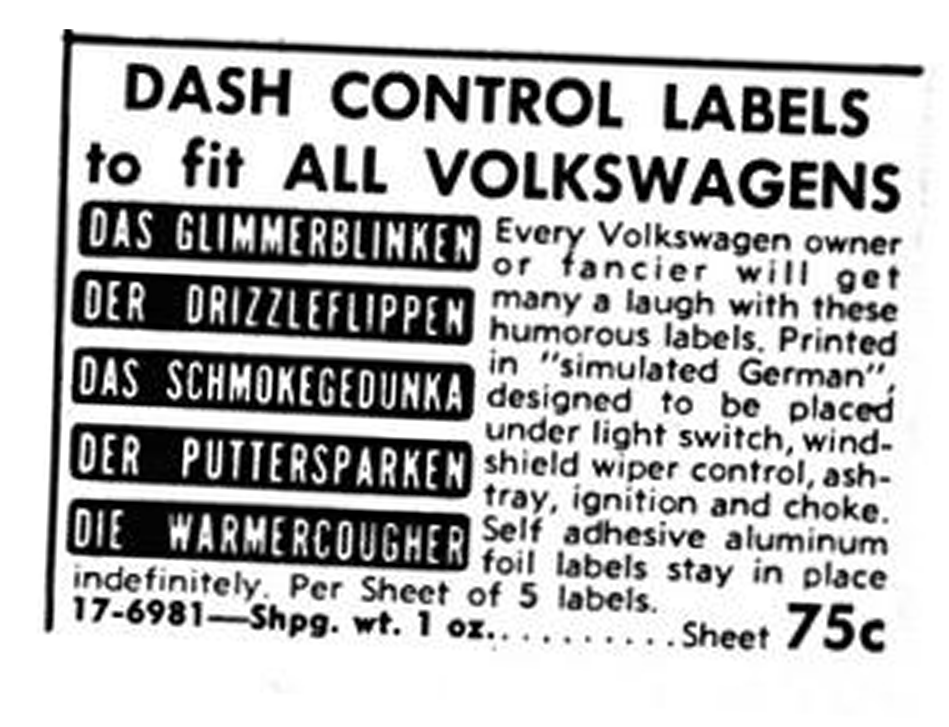 These I suppose I likely wouldn’t have seen unless I was really getting up in someone’s business, but these little stick-on dash labels are really, um, of an era.

Das Drizzeleflippen! Warmercougher! Puttersparken! That one must be choke. Is this racist? Or does it get a pass because, you know, German? I’m not sure.

I wonder if there are English equivalents of these for Germans who had Chevys or Fords or Austins or something?

I'm a co-founder of the Autopian, the site you're on RIGHT NOW! I'm here to talk to you about taillights until you cry and beg me to stop, which I absolutely will not. Sorry. Hug? Also, David's friend.
Read All My Posts »
PrevPreviousAllard Is Back: Here’s Why The V8-Powered Corvette And Shelby Cobra Owe Their Existence To A Quirky British Sports Car
NextCold Start: Was This Peak Rationality In Truck Design?Next