The current 911 GT3 is a bit of a hot commodity, and may be the best road car money can buy right now. However, what if your daily commute takes you through Parabolica? Don’t worry, Porsche’s whipped up a new GT3 RS that promises to be faster, madder, and packed with more trackday tech than ever before. Plus, the iconic red accents of the 996 and 997 GT3 RS models return to add a dose of visual lairyness.

Engine-wise, the new GT3 RS isn’t much of a game-changer. We’re only talking about an extra 15 horsepower (11 kW) over the standard GT3’s 503, achieved mostly through the use of new camshafts. However, this updated engine is mated to Porsche’s PDK dual-clutch gearbox which makes for a manufacturer-quoted zero to 62 mph (100 km/h) time of just 3.2 seconds. Top speed is a mere 184 mph (296 km/h) which seems slow at first, right up until you see a Nimitz-class rear wing bolted to the engine cover. 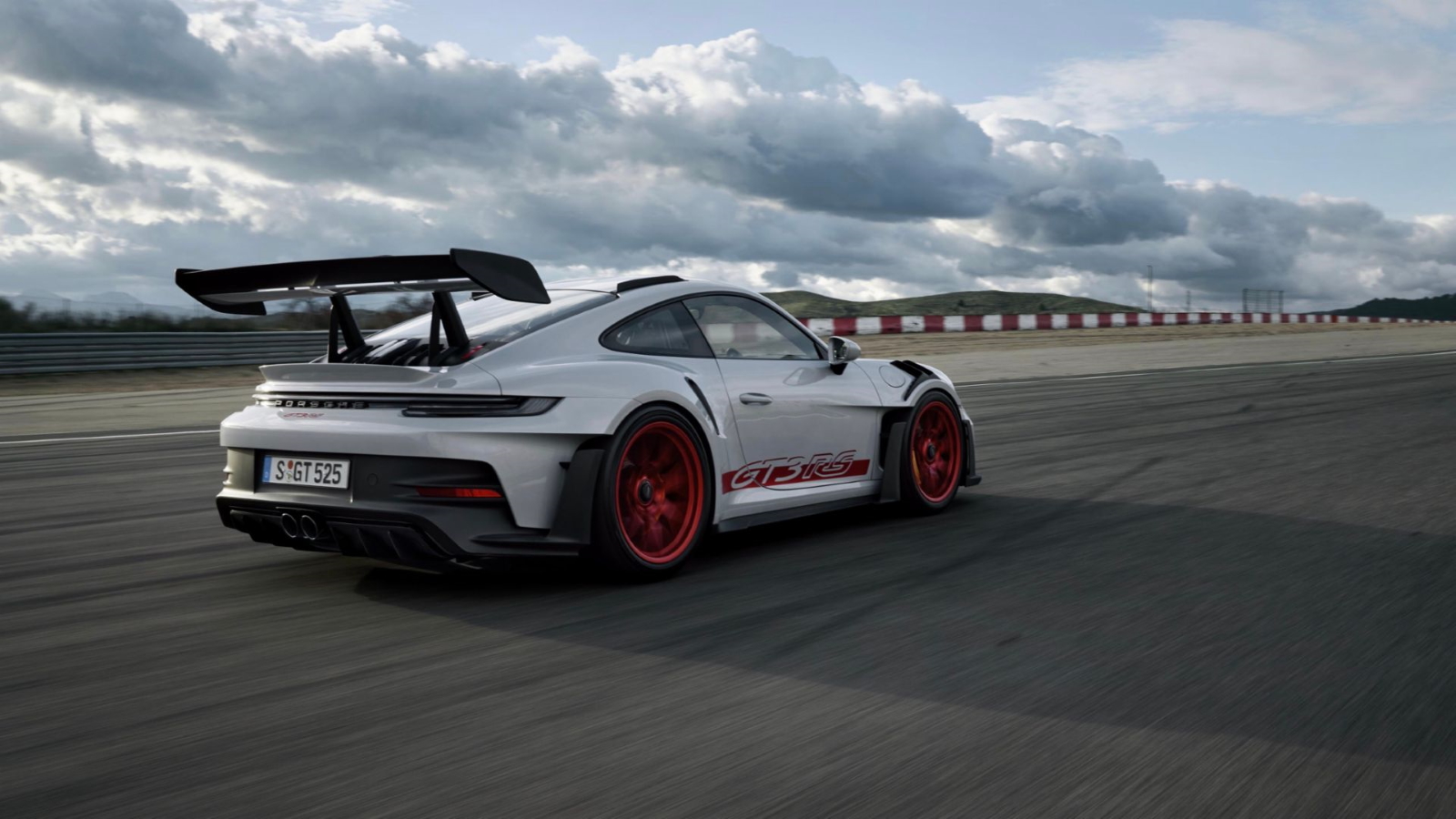 That wing isn’t just a fixed unit, it features a Formula 1-style drag reduction system for the upper element. Press a button on the steering wheel and the upper wing element moves to decrease drag for straight-line performance. If the driver doesn’t press the DRS button, the wing combines with other aerodynamic elements to create an earth-crushing amount of downforce. Porsche quotes 902 pounds (409 kg) of downforce at 124 mph (200 km/h), twice as much downforce as the last GT3 RS and three times as much downforce as a current GT3. Nearly flat-out at 285 km/h, the new GT3 RS generates a whopping 1,896 pounds (860 kg) of downforce, the equivalent of parking a euro-spec 2006 Lotus Elise S on the roof. Wicked. 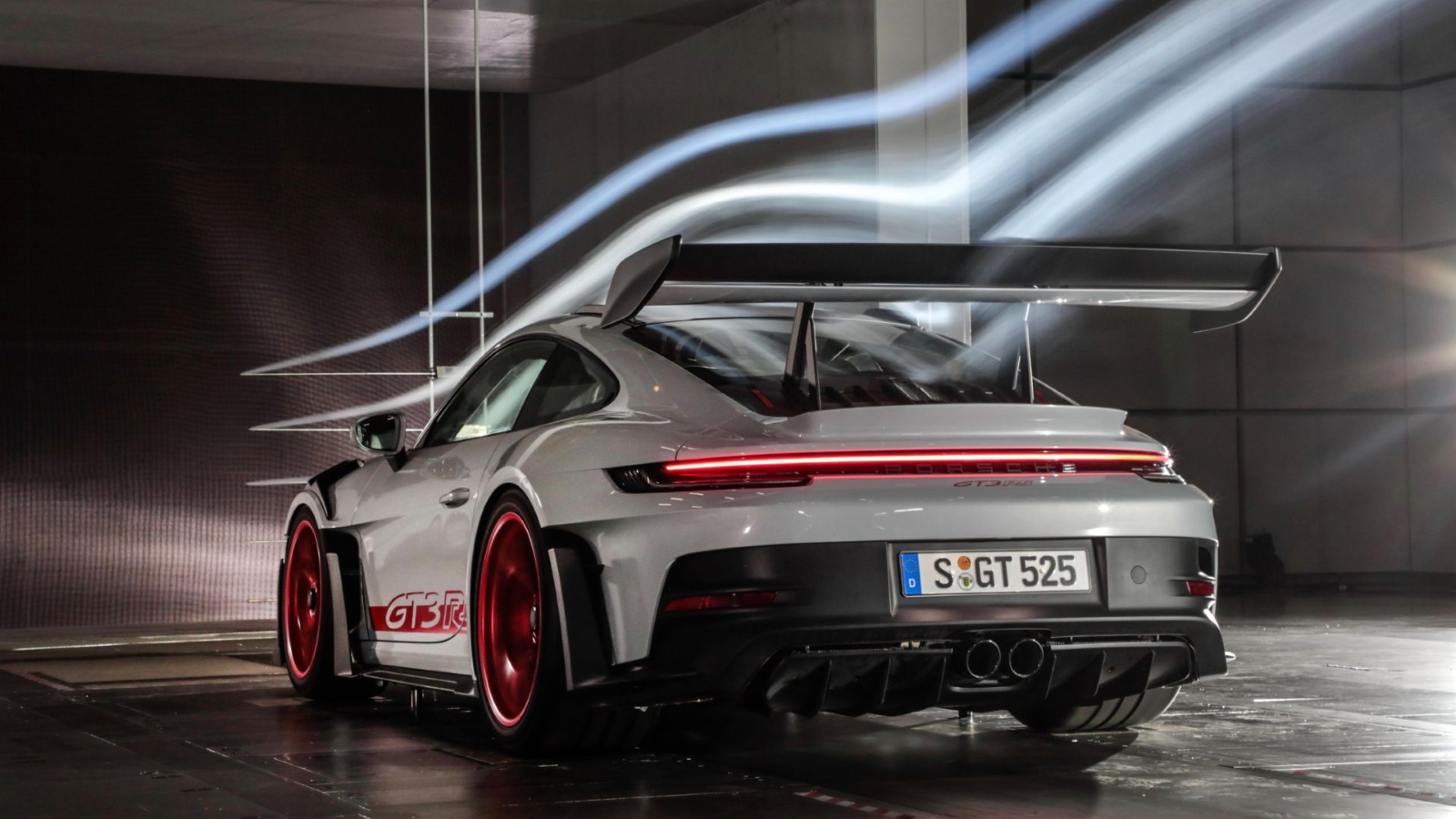 In addition to the herculean rear wing, the new GT3 RS features a proper front splitter and a smattering of side blades to direct air where it’s supposed to go. Blades ahead of the front tires force air away from the body, creating an air curtain effect. Blades behind the front tires mount to air-evacuating cut-out arches and send air along the body toward the rear air intakes. Up top, fins on the roof are said to direct air outwards to promote cooler intake air temperatures. While these are all fairly notable changes, the aero tweak that might make the biggest visual difference is the deletion of the standard GT3’s hood nostrils. Air from the radiator now escapes through mailbox-sized vents farther up the frunk lid, making a world of visual difference. 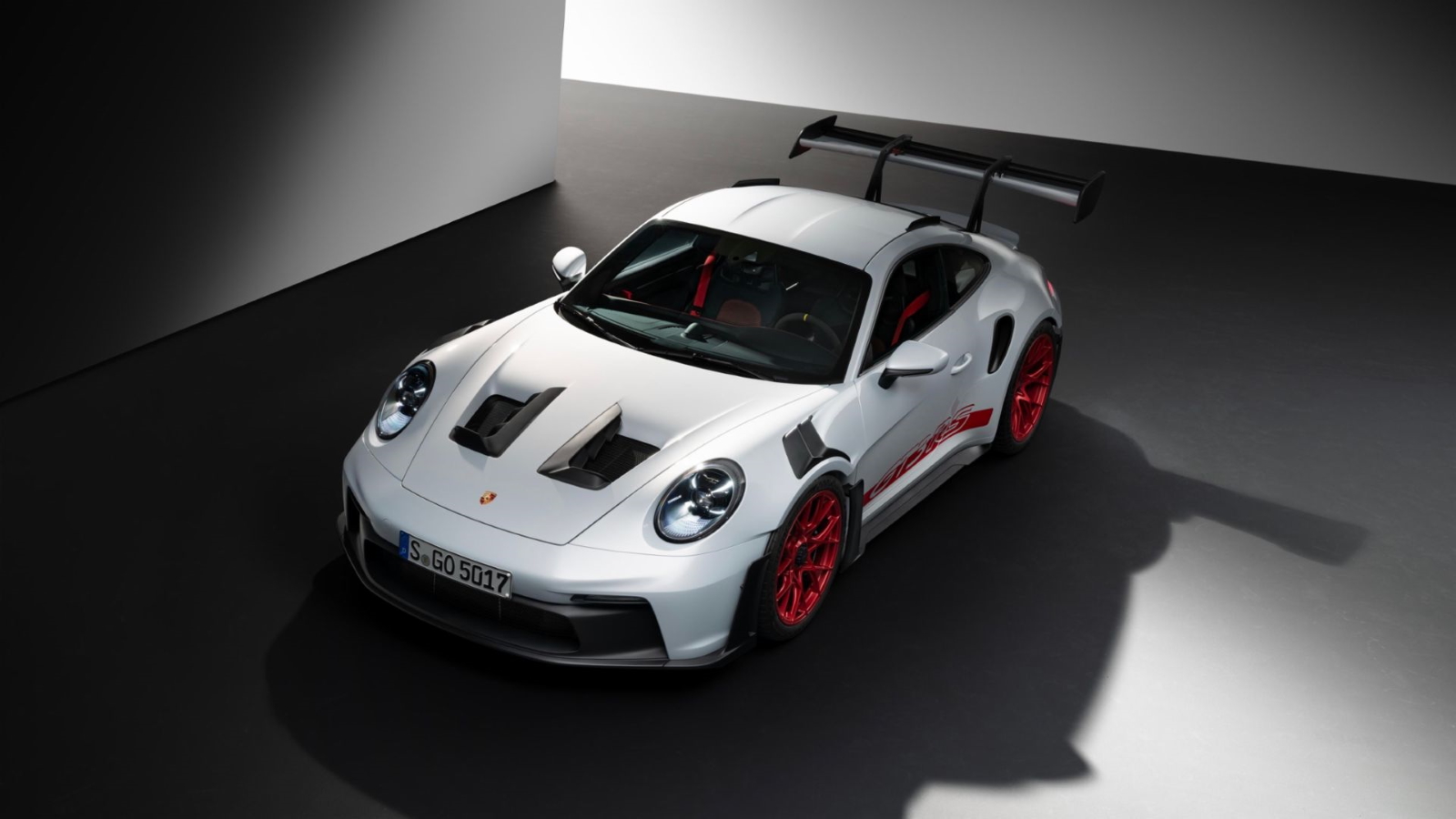 Serious downforce requires serious suspension, and Porsche’s GT Division has approached suspension tuning with all the seriousness of an IRS agent performing an audit. Because the whole front end of the GT3 RS is wider than on the standard car, Porsche’s filled out the bodywork using longer aerodynamically-optimized front suspension arms that add 88 pounds (40 kg) of downforce at top speed. In addition, the front ball joint in each lower front trailing arm has been set lower on the chassis to mitigate suspension pitch. Unsurprisingly, spring rates have been revised to cope with the added downforce, while electronically-adjustable dampers permit fine tweaks to compression and rebound from the cabin in track mode. Four-wheel-steering is also on tap, as is an adjustable limited-slip rear differential, perfect for setting up the new GT3 RS to match your driving style. 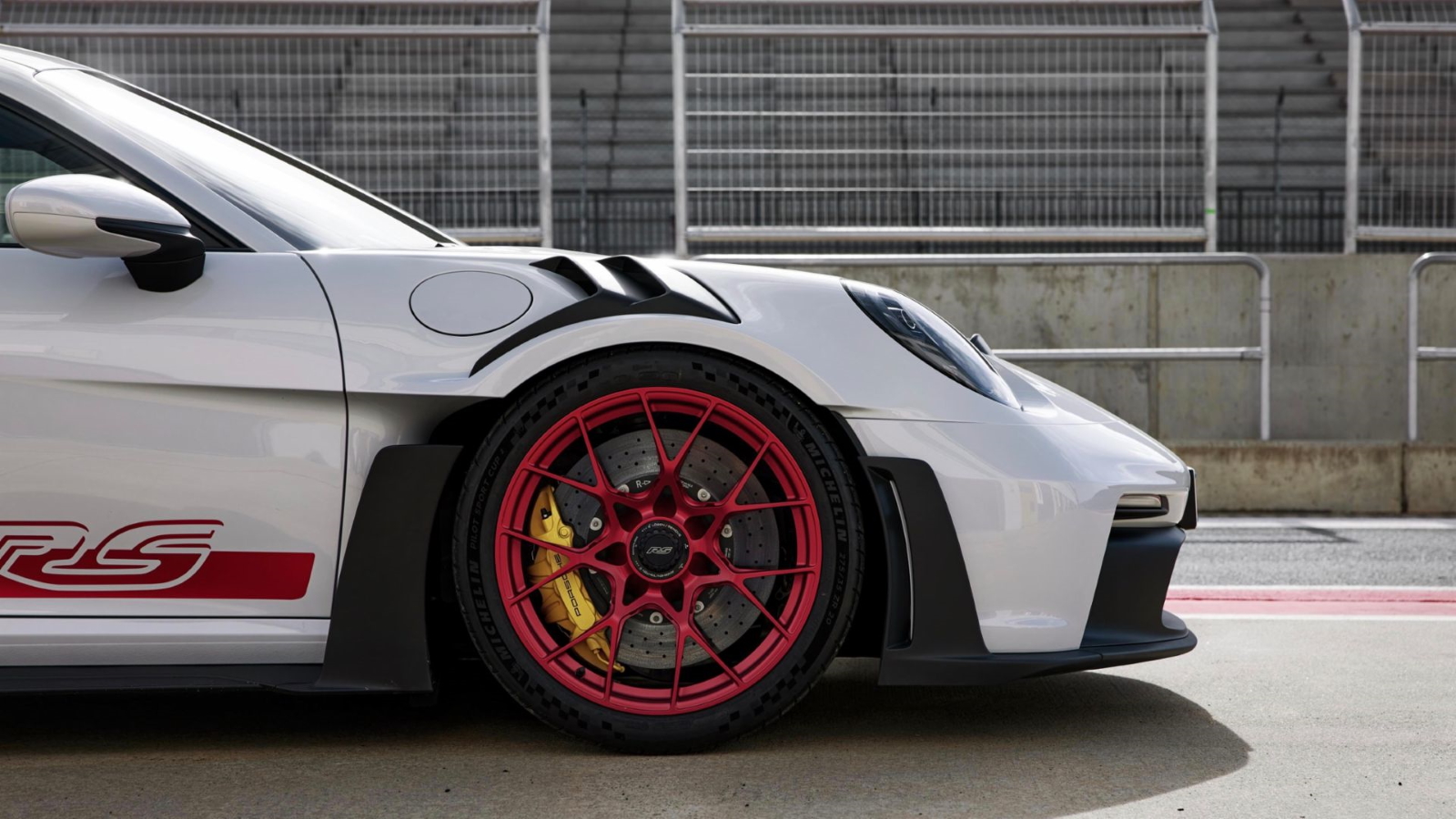 Hauling this slab of Swabian magnificence down from straightaway speeds is a choice of two brake packages. The standard brakes feature six-piston fixed aluminum front calipers, four-piston fixed rear calipers, and some truly massive discs. The front discs measure 16 inches (408 mm) in diameter, while the rears clock in at 15 inches (380 mm) in diameter. Porsche says that the front discs are a whopping 1.4 inches (36 mm) thick, although the German marque doesn’t state rear disc thickness. Opt for carbon ceramic brakes, and things get even beefier. We’re talking about 16.1-inch (410 mm) front discs and 15.3-inch (390 mm) rear discs, although trackday consumable costs for carbon ceramics are abominably high.

The current Porsche 911 may be the heaviest iteration yet, but the standard GT3 isn’t exactly fed a diet of KFC Double Downs and deep-fried Mars bars. Still, Porsche’s gone to further lengths in lightening the GT3 RS. While carbon fiber roofs and hoods aren’t anything new in the automotive industry, the GT3 RS takes the carbon fiber diet further with front fenders and doors made from the high-end reinforced plastic. Altogether, the GT3 RS weighs a reasonable 3,197 pounds (1,450 kg) on the DIN system, which does come with a caveat. DIN curb weight only includes 90 percent of total fuel capacity, so North American curb weight is likely to be higher. 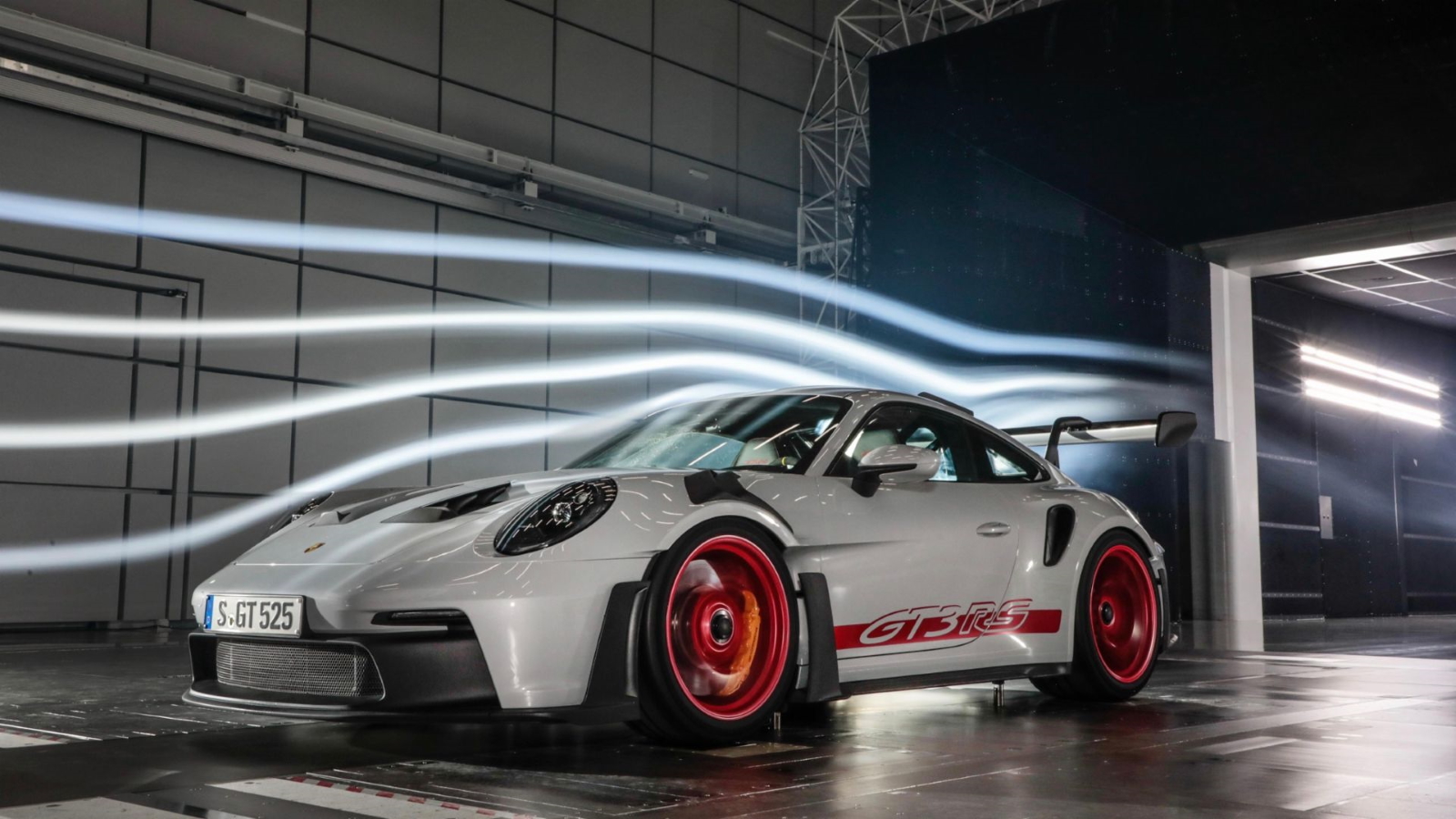 If you want the utmost in weight savings from your GT3 RS, you’ll want to tick a few option boxes starting with the Weissach package. It adds the cosmetic flash of some unpainted carbon fiber bits, but it also adds loads of carbon fiber goodies under the skin. The front and rear anti-roll bars, rear coupling arms, and rear axle shear plate are all made of carbon fiber reinforced plastic, which Porsche claims “contribute to a further enhancement of the driving dynamics.” Non-American models with the Weissach package will get a carbon fiber half cage, while speccing the Weissach package unlocks optional magnesium wheels that save 17.6 pounds (eight kg) over the standard forged aluminum units. If carbon fiber anti-roll bars weren’t interesting enough, the Weissach package also uses magnets to enhance the paddle shifters. While these magnets don’t speed up shifts, they’re supposed to better define paddle shifter detents, giving the driver extra feedback. It seems like a kind, driver-focused measure that’s more about engagement than absolute lap times.

If you happen to not live in America and don’t want to spring for the Weissach package, Porsche’s offering a Clubsport package at no extra charge. The Clubsport package includes a fire extinguisher, six-point harnesses, and a steel half-cage that should really make the GT3 RS trackday ready. So long as you don’t care massively about in-cabin luggage space, the Clubsport package really is a no-brainer considering its zero-cost status.

In theory, the new 911 GT3 RS will start at $225,250 including a $1,450 freight charge, although getting one is sure to be a rather difficult task. We’re already seeing six-figure markups on standard GT3s, so I wouldn’t be surprised to see strong markups and a strict allocation process for the new GT3 RS. Still, what a machine this track-focused 911 looks to be. The electric dawn may be on the horizon, but automakers aren’t finished partying just yet.

Thomas is a Nu Rave-blaring, heel-toe downshifting, maple syrup-swilling, chassis-geeking, junkyard parts-hauling, floppy-haired scenester who's been writing about cars since college. His current ride is a 2006 BMW 325i with the six-speed manual gearbox. Instagram: @thomas.hundal Twitter: @thomashundal
Read All My Posts »
PrevPreviousKarma Automotive Sues The New DeLorean Company And Its Executives Over Alleged Trade Secret Violations
NextI’m About To Attend The Fanciest Car Show On Earth And I’m A Little NervousNext