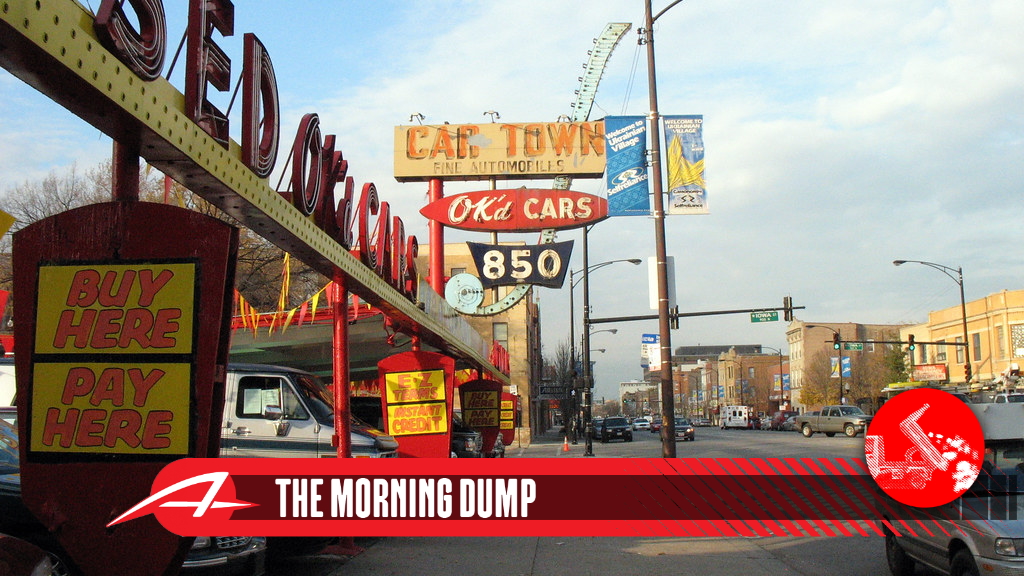 The average car is now older than Drake’s first album, Nissan expands its certified pre-owned program to include other manufacturers’ cars, Lancia launches a comeback. All this and more in today’s issue of The Morning Dump.

Our Cars Are Getting Old As Hell

Much to the surprise of absolutely nobody, the average age of a car in America has trickled slightly upward over last year’s figures. According to Automotive News, S&P Global Mobility released a report on Monday claiming that the average car in America is now 12.2 years old, an increase of just about 2 percent over last year. [Editor’s note: Is it just me or is Automotive News’ choice to use percent difference to compare ages a bit of an odd way to present these statistics? I’d probably have just done what Bloomberg did and said something like “up almost two months from last year’s figure.” -DT]  What’s next? Is rain wet? Is In The Aeroplane Over the Sea a red flag? Do birds chirp?

In all seriousness, this jump may be minor, but it shouldn’t be surprising. New cars aren’t exactly plentiful right now and old tin isn’t being scrapped because newer stuff is properly expensive. Hey, when the average used car on CarGurus is listing for more than $30,000, fixing the shitbox you know and love often works out cheaper than a car payment. More importantly, we don’t really know when used car prices will drop. Take a look at the latest Manheim index report, it appears that we’ve officially entered the “lol, lmao” zone.

Was the Q1 contraction signaling an incoming jump in used car values? Are we embarking on a long and rocky descent? Who knows? Given a slow ramp-up of production and a reduction in leased vehicles to turn in, we’re likely looking at higher than pre-pandemic used car prices for a few more years. Speaking with Automotive News, automotive aftermarket practice lead for S&P Global Todd Campau said, “I think there’s definitely going to be upward pressure on average age through probably 2024, maybe even ‘25.” It looks like we’re in for a long, shitboxy start to the 2020s.

Nissan Will Soon Sell You A Certified Pre-Owned Non-Nissan

Speaking of used cars, dealers are getting more desperate than a pop-punk kid on prom night. We’ve already seen Honda slap a CPO stamp of approval on cars up to 10 years old, now it’s Nissan’s time to shine. This fall, the Japanese automaker is launching a certified pre-owned program for cars that aren’t Nissans. What, did you think that Big Altima Energy was truly sustainable?

Like Honda’s HondaTrue Used program, Nissan’s new CPO program for non-Nissans is a bit light. According to Automotive News, Nissan dealers will conduct an 84-point inspection, then slap a six-month, 6,000-mile warranty on anything that qualifies. I’m sure there’s some healthy profit baked in, but the peace of mind that comes with a properly-backed warranty is quite nice for some consumers. Ford’s been doing a similar thing with its Blue Certified program, where vehicles up to a decade old with fewer than 120,000 miles on the clock are spruced up and equipped with a 90-day, 4,000-mile warranty. However, this rush of diet CPO programs isn’t all good news. If this trend keeps up, it’ll certainly screw with the flow of older vehicles to independent dealerships. While the image of a dodgy used car dealer stepping out of a sagging S-Class is an ever-present stereotype, cheaper prices are cheaper prices, and a good pre-purchase inspection is likely a whole lot cheaper than a warranty.

The past decade has been a rough one for Lancia. The sharp-looking third-generation Delta was discontinued in 2014 while the Musa, a badge-engineered Fiat Idea, was killed off in 2012. Aside from producing the long-in-the-tooth Ypsilon, the famed Italian brand was mostly used for peddling Chrysler wank. Anyone fancy a Chrysler 200 Convertible rebadged as a Lancia Flavia? I thought not. While it may have been tempting to let Lancia die a slow and painful death, Stellantis CEO Carlos Tavares has other ideas.

Let’s start with distribution. According to a press release issued Friday, Lancia is planning for 50 percent of its European sales to be made online. Honestly, that’s a solid move. Low overhead, cut the pain of going to a dealership, easy financing up front. Job done. But what about product? It shouldn’t be a surprise that Lancia’s going electrified, with a three-vehicle approach that the company describes with surprising number of early official details. The first product, the new Ypsilon, will clock in at four meters (157.48 inches) long and arrive in 2024. Stellantis claims that all Ypsilon models will be electrified, although that could mean anything from all-electric powertrains to a 48-volt mild hybrid system. Next comes a 4.6-meter (181.1-inch) long flagship, a few inches shorter than a BMW 3-Series and a few inches longer than an Audi A3. Finally, a new Delta with what Lancia describes as “geometric lines” will arrive in 2028 sporting a length of 4.4 meters (173.2 inches). While I don’t have crazy expectations for Lancia, I’m really excited to see what the brand comes up with.

It’s no secret that midsize sedans aren’t doing so well right now. Ford, Stellantis, Mazda, Buick, Volkswagen, and Lincoln have all either bowed out of the American midsize sedan segment or will bow out shortly. Potentially adding to that list? Hyundai. If a report from South Korean outlet Chosun Ilbo is to be believed, and take this with a grain of salt, there’s a chance that the end of the road for Hyundai’s midsize sedan may be in 2025.

Honestly, it would be a bit of a shame if the report turned out to be true. While the 2011 YF-generation Sonata was plagued with engine issues, it was a pivotal moment for Korean cars in America. Sure, the Hyundai Genesis was also huge, but the Sonata was attractive and desirable enough to worry Toyota. It marked the moment that Korean cars stopped being sensible and started being desirable, and consumers absolutely flocked. You could park a then-new Sonata in any upper-middle-class neighborhood in America and not look out of place. I know because my dad did just that. His 2013 Sonata fit in perfectly among the vast Cape Cod homes in Chesterfield, MO. While the latest Sonata’s styling is polarizing to say the least, the turbocharged N-Line model is a hilarious bit of one-wheel-peeling fun, a much more refined execution of the concept that spawned the Pontiac Grand Prix GTP. Let’s hope that the Sonata sticks around for another generation.

Whelp, time to drop the lid on this edition of The Morning Dump. While it’s not exactly surprising that America’s vehicles are getting older, it’s an awesome opportunity to play a game. Take the ages of every vehicle in your fleet, add them all up, divide that number by the number of vehicles in your fleet, and let us know your fleet’s average age. Mine’s quite easy at 16 as I only own one car, but I’m sure some of you have an average fleet age multiple times of the average vehicle’s age of 12.2 years old.

Lead photo credit: “Car Dealership on Western Ave” by David Hilowitz is licensed under CC BY 2.0.

Thomas is a Nu Rave-blaring, heel-toe downshifting, maple syrup-swilling, chassis-geeking, junkyard parts-hauling, floppy-haired scenester who's been writing about cars since college. His current ride is a 2006 BMW 325i with the six-speed manual gearbox. Instagram: @thomas.hundal Twitter: @thomashundal
Read All My Posts »
PrevPreviousThe Key To Getting A Cheap Car Right Now Is To Chase The ‘Ugly Stick,’ And The Chevy HHR Is The King
NextA Look At A 1950s Messerschmitt KR200’s Steering Yoke, Which Is Cooler Than Tesla’sNext