I’m so excited to be able to relay to you this incredible bit of circa-1916 breaking news, because it has so much good, deeply weird stuff crammed into it: taillights, a riot that was maybe more of a big comical parade of hundreds of people (even though the significant property damage was real), and a description of a viral story in 1916 terms. It’s all so good, and it takes place in a little town called Augusta, Kansas, and yes, it was absolutely all started by taillight-related events. I better explain.

This story came to my attention via my friend T.Mike, an elusive and shadowy archivist, who noticed a post on Reddits r/oldnews subreddit, and then found for me the original source articles. The first one described what sounds like a pretty terrifying riot involving 2,000 people that ended with the destruction of a jail and the freeing of the prisoners within: 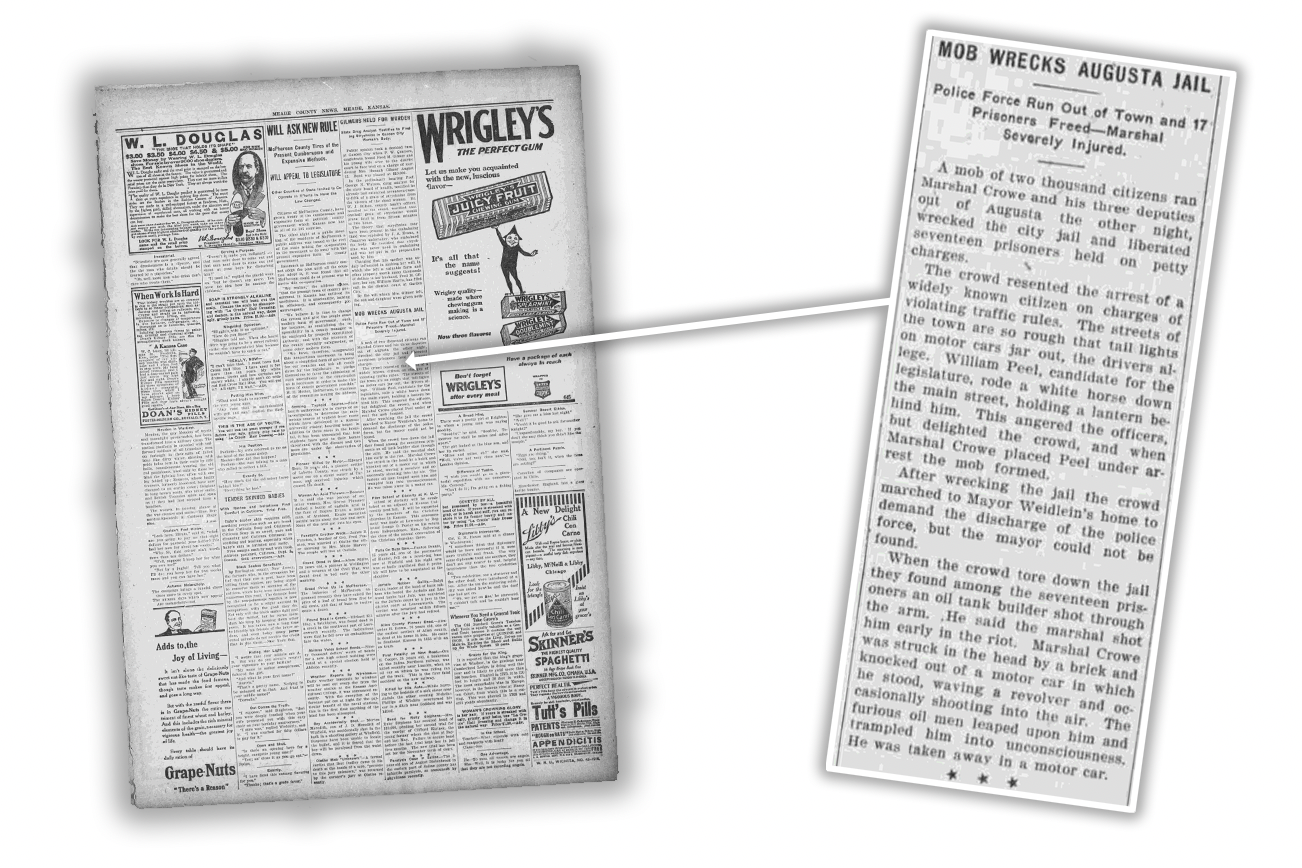 If you read the article, the reason those 2,000 citizens stormed the jail is because a “widely known citizen” was arrested on a traffic charge. That charge? Not having a functioning taillight.

Now, the story gets deeper here, because the reason that widely known citizen had taillight problems in the first place is because of the town itself. From that story in the October 7, 1916 edition of the Emporia Gazette:

“The streets of the town are so rough that the tail lights of motor cars jar out, the drivers allege.”

I engaged the archivist to help me find references to the archaic term “jar out,” and it turns out it’s referring to the habit of oil-burning lamps extinguishing their flames when jostled or bumped, which splashes the oil around and up onto the wick. You can see it referenced in old ads for electric lights, like this one from the Ohio Brass Company: 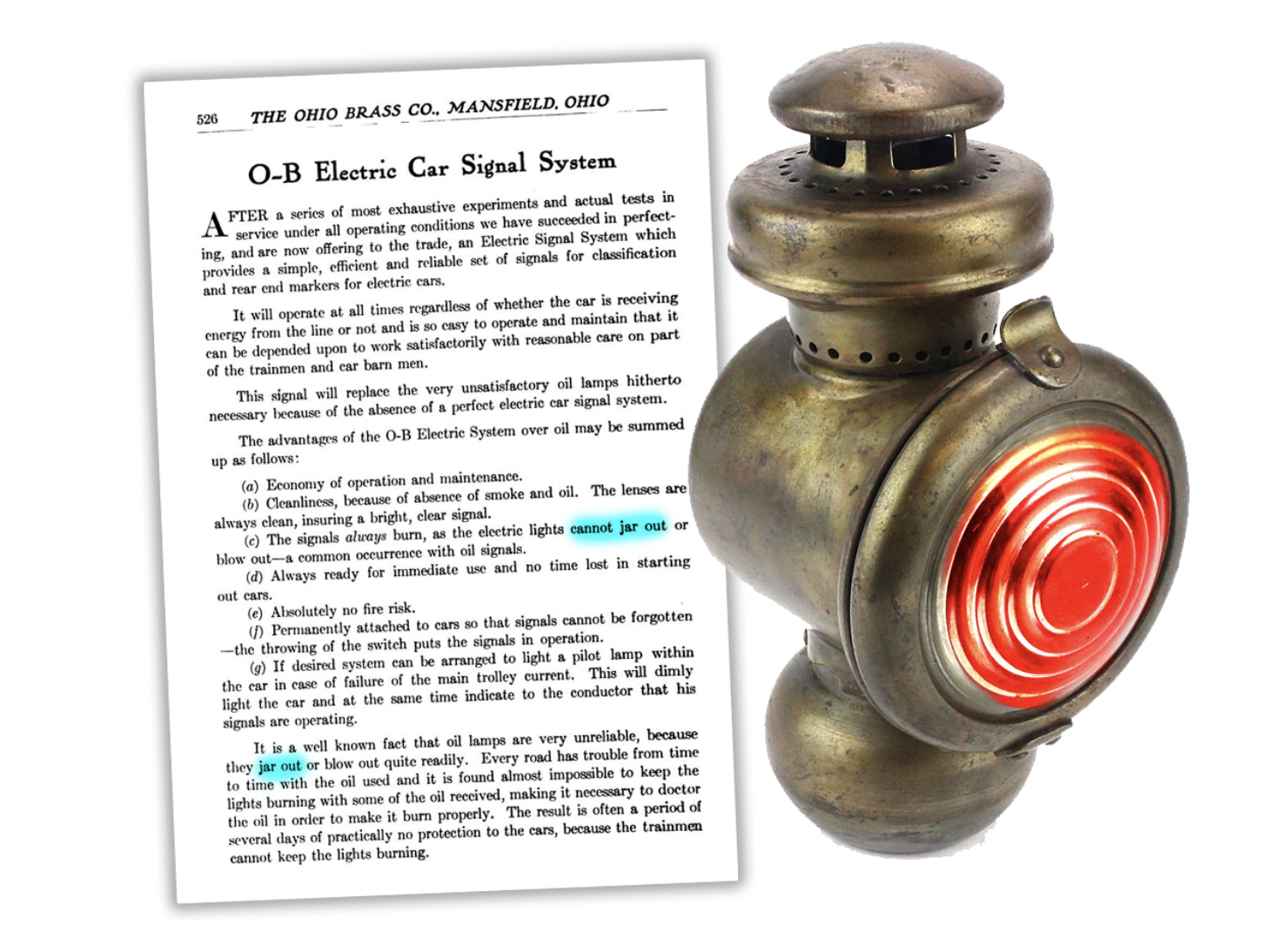 The light there is a sample of an oil lamp that would have “jarred out,” specifically one from a Ford Model T. So, it seemed that the riot’s cause was that people were being fined for non-burning taillights, when in fact the reason they weren’t burning was that the shitty roads were so bad they were jostling the lights out, and people had enough.

Other researchers on the original Reddit thread found more information about the town of Augusta’s motor vehicle regulations, including Ordinance #274 which stated, according to a document titled History of Augusta Public Safety Department (emphasis mine):

April 9, 1916 – Ordinance #274 was passed. This ordinance had to do with automobiles driving on the streets of Augusta. The speed limit was set at 15-mph. When turning a corner, speed was to be reduced to 8-mph. Also, there were barrels placed in the middle of each intersection. When making a left turn, drivers were to go around the barrel in the intersection. “Good and sufficient brakes” were a requirement. “A suitable bell, horn or other signal” was to be sounded fifty feet prior to any intersection. One half hour after sunset and one half hour before sunrise, one or more lamps showing white light “visible within a reasonable distance from the direction toward such vehicle is proceeding and a red light visible from the reverse direction” were required.

The document makes a reference to the riot as well, euphemistically referring to them as “interesting events”:

Interesting events were caused by the enforcement of this ordinance. To follow this story, you must remember that the streets were mostly dirt during this time. With traffic the streets became extremely bumpy, which proved to be especially hard on taillights (a requirement per ordinance #274). The marshal at the time, Crowe, and his three policemen (one of them being Crowe’s brother) were especially vigilant when it came to enforcement of this ordinance. The fine for violation of this ordinance was $16.85, and it was common knowledge that $6.85 of the fine went to the arresting officer. What an incentive!

(To put things in perspective, that $16.85 fine is the equivalent to $422 today! Holy crap. And if it was understood that the equivalent of about $181 went to the cop for each citing of a taillight-out fine, then hell yeah cops are going to be looking for the absence of red lights at the rear of every car to trundle by).

The same document continues, giving more details about what happened during the riot:

October 5, 1916 – Enforcement of ordinance #274, as it had been done over the past several months, came to an abrupt halt. On that evening, W. R. Peal, a prominent Augustan (who was later treasurer of Butler County) came riding a horse down State Street. Mr. Peal had a long pole in one hand that had a lantern with a bright red globe hanging on the end of the pole. Inside, the flame flickered illuminating the red globe. The significance of the light was obvious to everyone.

People along the curbs and sidewalks clapped and hooted, mocking the marshal, who was patrolling the street looking for non-burning taillights. The marshal and his men arrest Mr. Peal and took him to jail. This did not go over well with the citizens of Augusta. A mob, six hundred or so in size, of angry citizens quickly formed. Marshal Crowe jumped on a car and shouted at the crowd to disperse. No one listened. He drew his pistol and fired several shots over their heads.

The crowd was not affected and a brickbat came sailing through the air, hitting Crowe in the in the head and knocking him unconscious. He fell from the car and three or four men from the crowd started beating and kicking Crowe. Others rushed in and warded off the attackers. They then hurriedly moved the officer away from the scene.

The mob, however, was not finished…. Someone suggested that they tear down the calaboose (jail). A majority seemed to have agreed and with sledgehammers and crowbars in hand, the group went to the jail. They pounded and pried on the walls and doors until the doors came crashing down. They freed all the prisoners, Mr. Peal included. Once all were freed, a march to the mayor’s house ensued, demanding the discharge of the entire police force. The mayor was not home and could not be found. Nor could any of the policemen. All had gone into hiding.

Holy shit, right? What we have here is a riot that was triggered by, of all things, overly strict and unforgiving taillight legislation!

Now, here’s where things get weirder. The story of the Augusta Taillight Riot seems to have gone, essentially, the early 1900s version of viral, being reported on in newspapers all over the country, spread by the Morse code-internet that was the telegraph network. About 10 days after the initial story, a follow-up story appeared, partially in response to the popularity of the first story, and claimed that, no, the riot was really just a joke! Here’s a complicated headline from the October 17, 1916 Iola Daily Register: 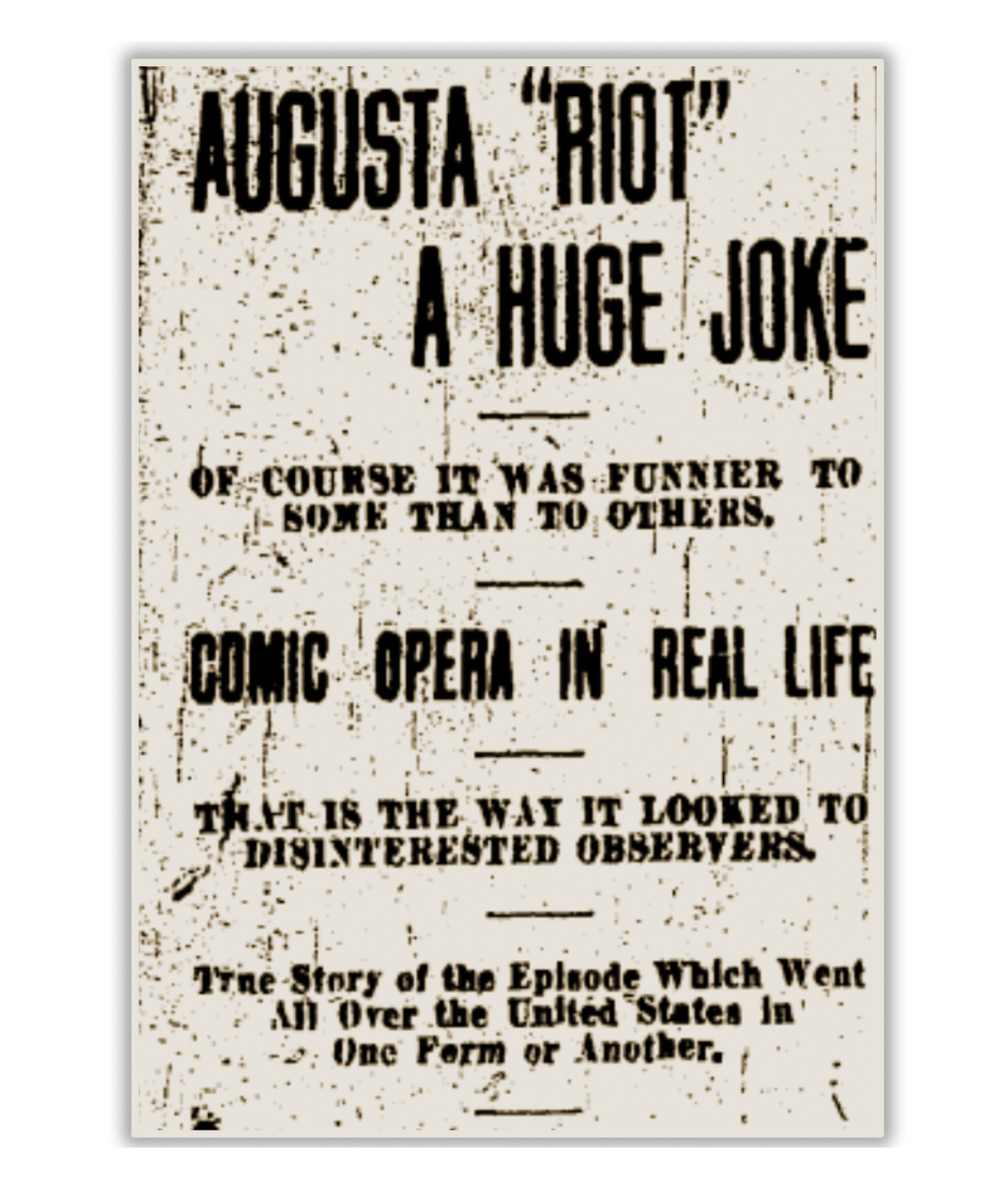 You can see the reference to the story’s virality in that last bit, “True Story of the Episode Which Went All Over the United States in One Form or Another.” So, what actually happened, then? If it was a big joke, does that mean there was no riot?

Well, from what I can tell, there was still what sure sounds like a riot, but that riot may have been — and I’ll admit I wasn’t really aware this could be a thing — a more good-natured riot?

I mean, the front of the jail was still smashed and required rebuilding, so I’d say that feels a bit more than a joke, at least maybe by my perhaps too-tender 21st-century standards. The Iola Daily Register sets the record straight: 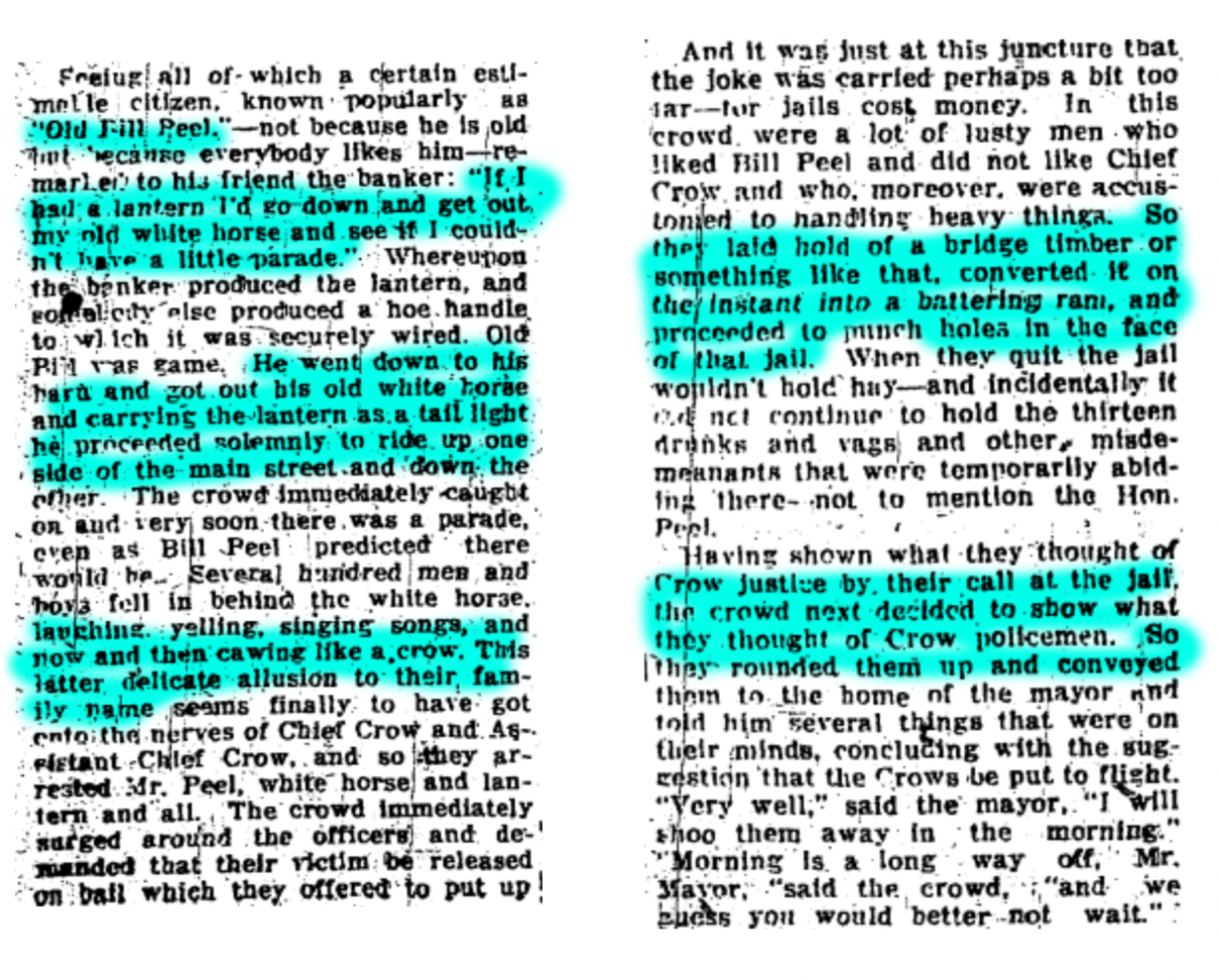 So, we see here that the impetus for whatever the hell happened is the same: shitty roads were jarring out oil-burning taillights, and here we get the extra bit of information that Fords (almost certainly the very common Model Ts) were especially susceptible.

We also get slightly different reporting here of the fines and the cops’ take. Here, the fine is $10, with the cops getting $1 of that money, so, in modern dollars, that would be $265 fine, with cops getting $26 — still a good chunk of change.

It seems the cops (who were all brothers with the last name of Crow) were fining drivers left and right, leading to people getting worked up, and one of the citizens, who was known as Old Pill Peel for some baffling reason, got a red lantern on a pole and started to parade around town in a sort of protest, and was soon followed by hundreds of people. [Editor’s Note: This story is absolutely bonkers. The cops all from the same family essentially paying themselves, riots caused by taillight oil sloshing, a dude named Pill Peel — what is this madness?! -DT] 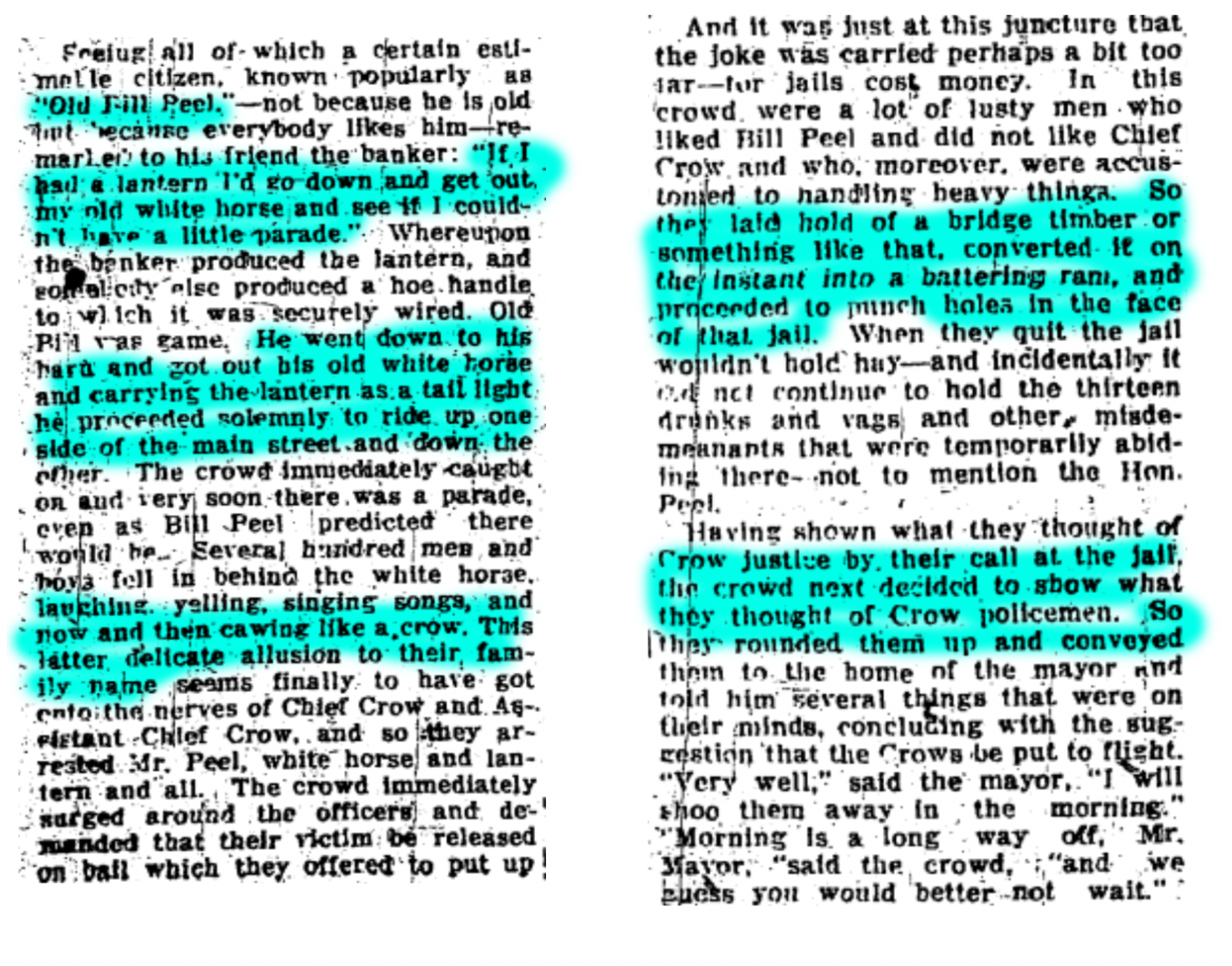 The crowd was taunting the cops with crow-like cawing, and demanding the taillight-offenders be released, but the police weren’t having it.

Then it sounds like shit really went off the rails, as the mob (numbering around 600 and not the 2,000 reported) grabbed some “bridge timber” and used it as a battering ram to smash the jail doors, releasing 13 prisoners. They then ran the police out of town, and went even more bonkers, deliberately cajoling motorists to break all the laws they could: 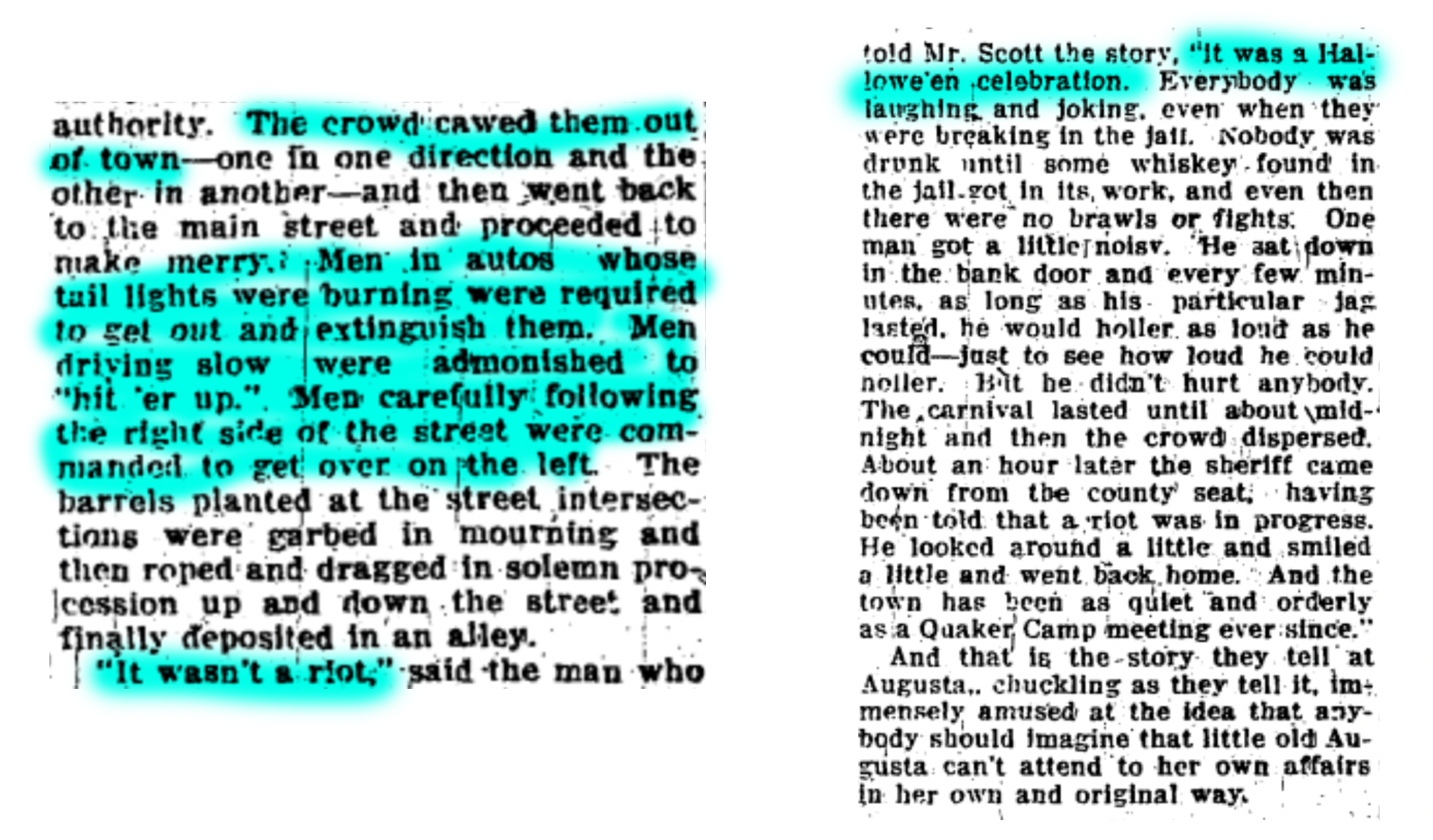 Rioters were getting drivers to put their taillights out, drive on the wrong side of the road, speed, and more. It sounds like everyone went absolutely batshit.

And yet, somehow, nobody was calling this a riot. In fact, in the newspaper, one guy called it a “Halloween celebration.” Huh. A Halloween celebration that involved the destruction of a jail and physically running cops out of town and a horse and a lantern and more. Hot damn early 1900s Kansans knew how to party.

I don’t really understand how this follow-up article was supposed to make everyone think, no no, this whole thing was all just a joke when everything is exactly the same, save for a lower cost for the fines and 600 people involved instead of 2,000.

So, despite what these almost-certainly-dead-people claim, I’m sticking with the claims of the original story: In 1916, a bunch of people started a riot because of taillights, and it got completely out of control.

Taillights are important, people. Like smash-a-jail important. Don’t forget it.

I'm a co-founder of the Autopian, the site you're on RIGHT NOW! I'm here to talk to you about taillights until you cry and beg me to stop, which I absolutely will not. Sorry. Hug? Also, David's friend.
Read All My Posts »
PrevPreviousOfficial 2023 Nissan Z Pricing Is Out, And It Looks Like A Bit Of A Bargain
NextAttention: We Have Come Up With A Name For The Design Trend That Made Cars ‘Rounder’ In The 1990sNext