It’s May 4th, globally understood to be Star Wars Day, and since David is still on his press trip I can get away with doing some Star Wars content without having to justify it to David, who I’m pretty sure thinks Shrek was in Star Wars. Remember, David grew up in Germany thinking that entertainment was watching wandering mimes perform scenes from Struwwelpeter, so he doesn’t know jack about pop culture. But we do, and since it is Star Wars Day, I want to talk about a unique automotive-related thing that the Star Wars franchise boasts: the largest selection of toy cars based on actual characters in any media franchise. Let’s talk about those a bit, and then I’ll reveal the Star Wars characters least desired to be translated into Hot Wheels form, according to my research.

In case you’re unaware of the line of Hot Wheels cars based on Star Wars characters, it’s a really unusual phenomenon. Hot Wheels designers make cars not based on actual vehicles, but rather as automotive adaptations of characters from the movies, basing the look of the car on the character’s general look and personality traits.

There’s a ton of these, too, ranging from popular, well-known characters like R2-D2 and Darth Vader: 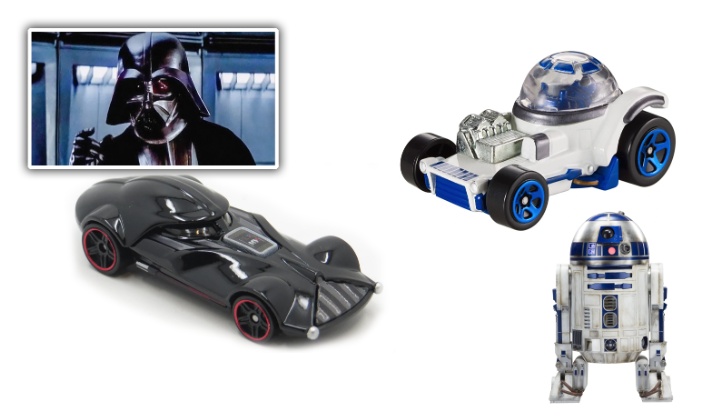 …to more obscure characters like Nein Nunb and Maz Kanata: 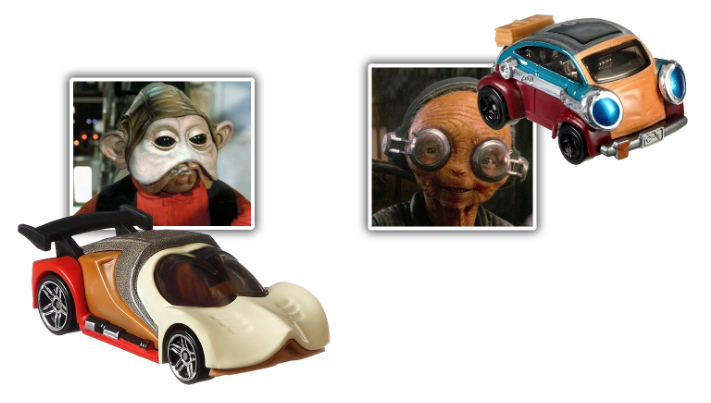 As you can see, Hot Wheels designers have gotten remarkably good at translating human and alien and droid features into toy automotive forms. That little Isetta-like car with the huge headlights does very much suggest that small, queso-colored alien Maz Kanata, and the flappy face features of Nein Numb weirdly translate well into a sporty-looking car. 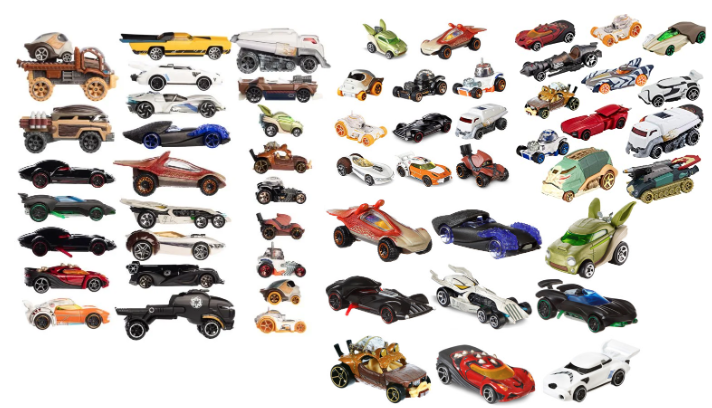 It’s a really specific skill to pull this off, and Hot Wheels designers have been doing it for a truly impressive number of characters, making me sort of wish this was a common practice for more media properties. Wouldn’t you like Hot Wheels versions of the cast of Succession? Or maybe Bridgerton? Of course you would.

Anyway, the sheer number of these character cars made me start wondering exactly which characters they wouldn’t turn into cars? I mean, they made a freaking Jar-Jar Binks one: 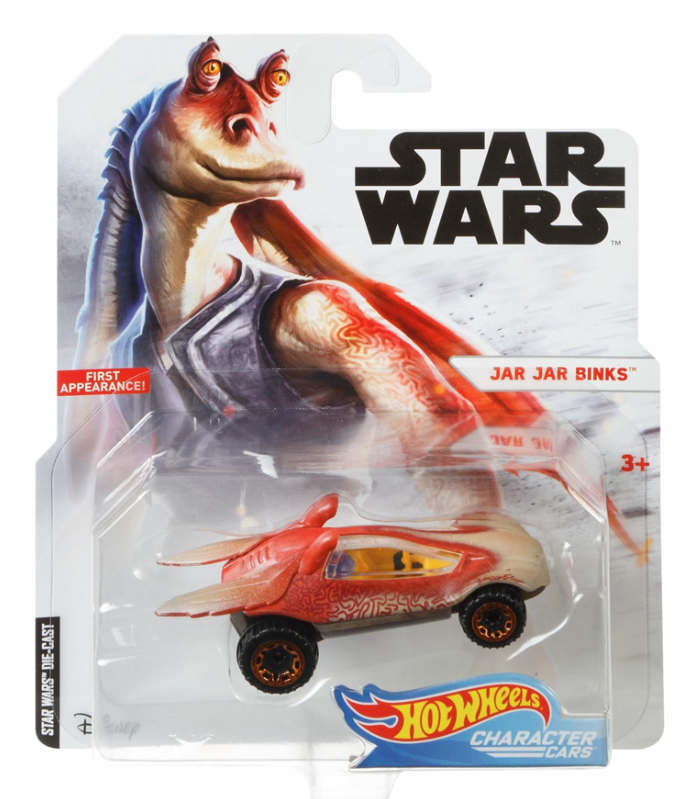 …which would lead you to think that, hey, anything goes. But that’s not quite the case. Using databases of Star Wars characters downloaded into the Autopian Mainframe (a Radio Shack Model 100 portable computer connected to 500cc of laminated chimpanzee brain material) and then cross-referenced with demographic datasets, composites of human psychological profiles, and a couple of scanned Chinese Zodiac placemats, we have come up with a list of the five least desired Star Wars character cars, and then had the Autopian Mainframe render images of them via wires from a serial port connected to the part of my brain that moves my hands, which then drew them based on the compiled data.

As you can see, this is extremely scientastic.

Here’s the first one: 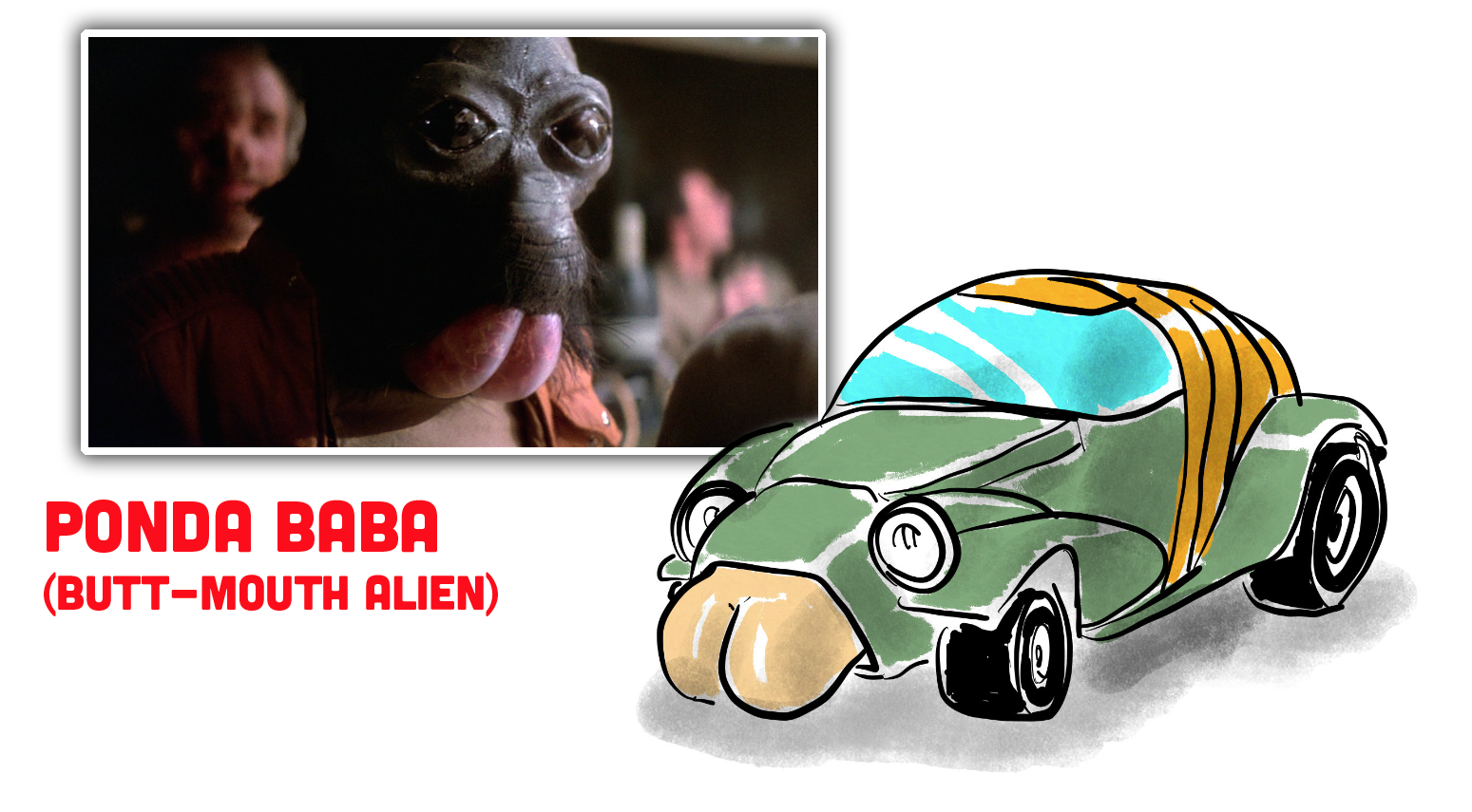 Yes, that butt-mouthed alien from the original 1977 movie has a name, and it’s Ponda Baba. I suspect the reason this one is in so little demand is because the car would have to have a big butt right on the front. I guess that didn’t focus-group well. Also, Ponda was kind of a jerk. 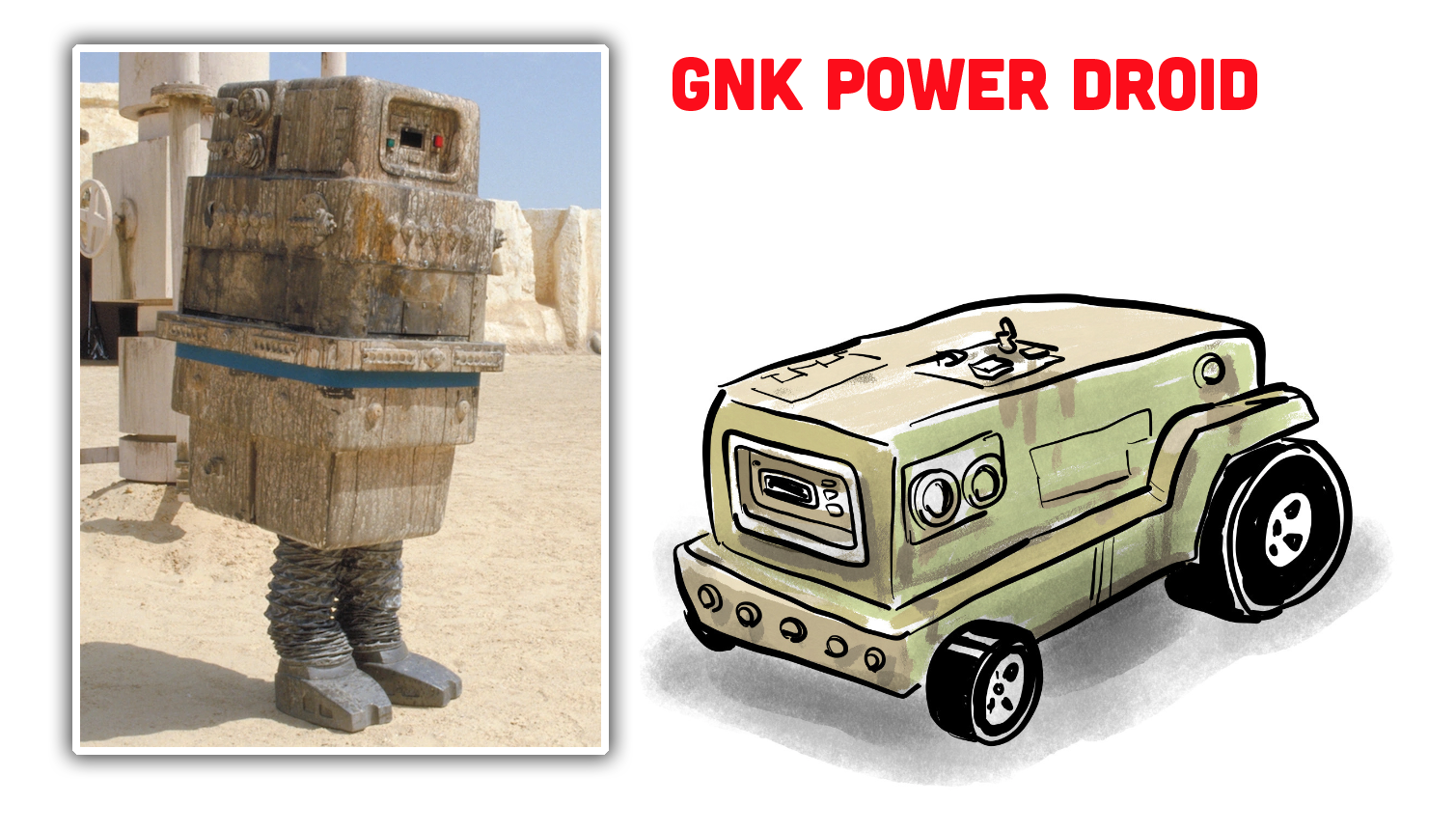 This one kind of surprised me, because I always loved the clunky, slow, shuffling GNK (Gonk) power droids, thanklessly and slowly providing energy to whomever or whatever needed it. Maybe the whole slow and clunky thing was just too far from the whole point of Hot Wheels, fundamentally. 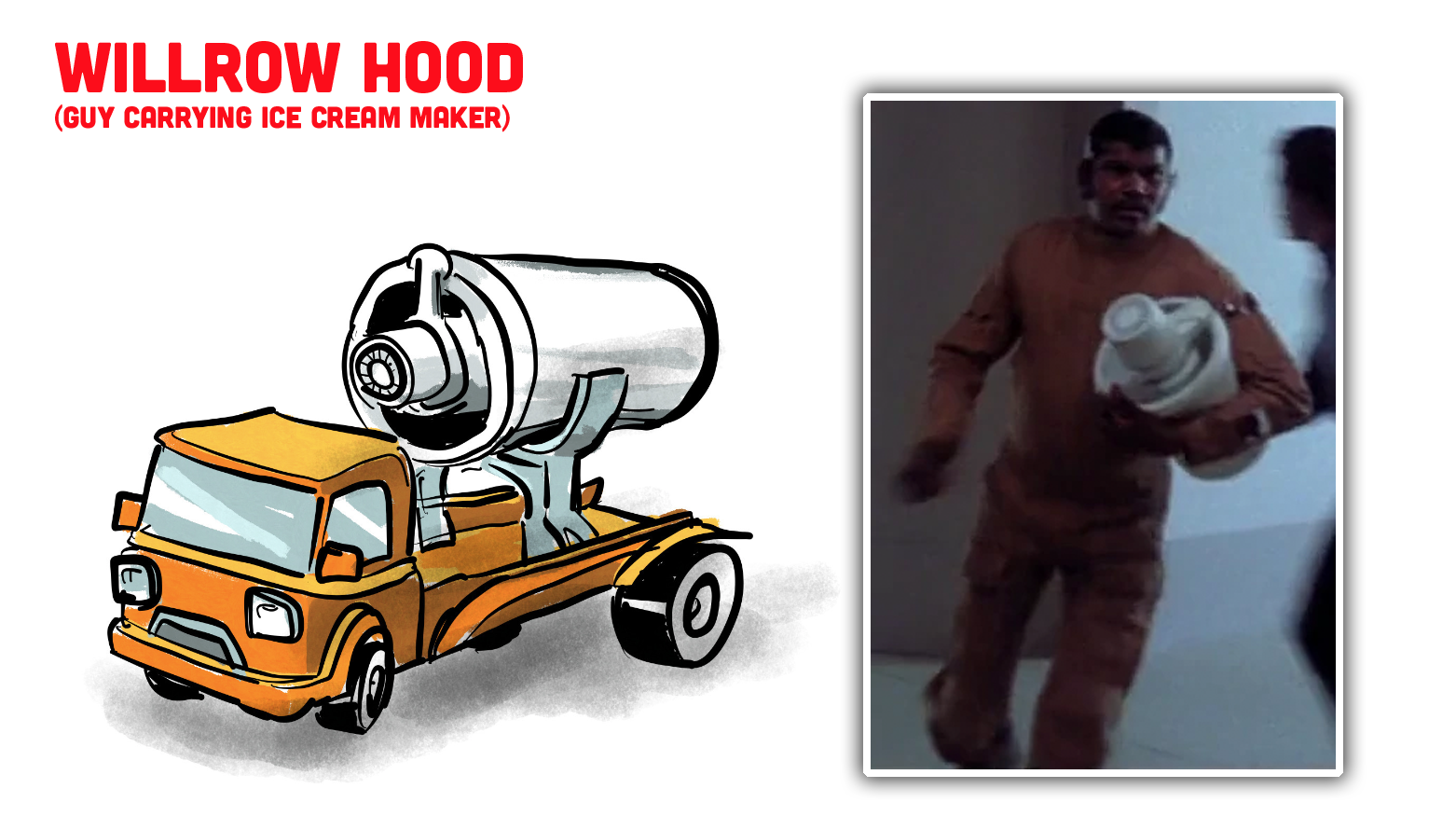 In 1980’s The Empire Strikes Back, there’s a scene in the Cloud City over the planet Bespin where a dude runs by in the background holding what appears to be an ice cream maker. This dude in the orange jumpsuit has a name: Willrow Hood. While I think his Hot Wheels character car captures his essence perfectly–it’s carrying an ice cream maker–I guess somehow this character wasn’t popular enough with fans? Some of whom may even love ice cream? 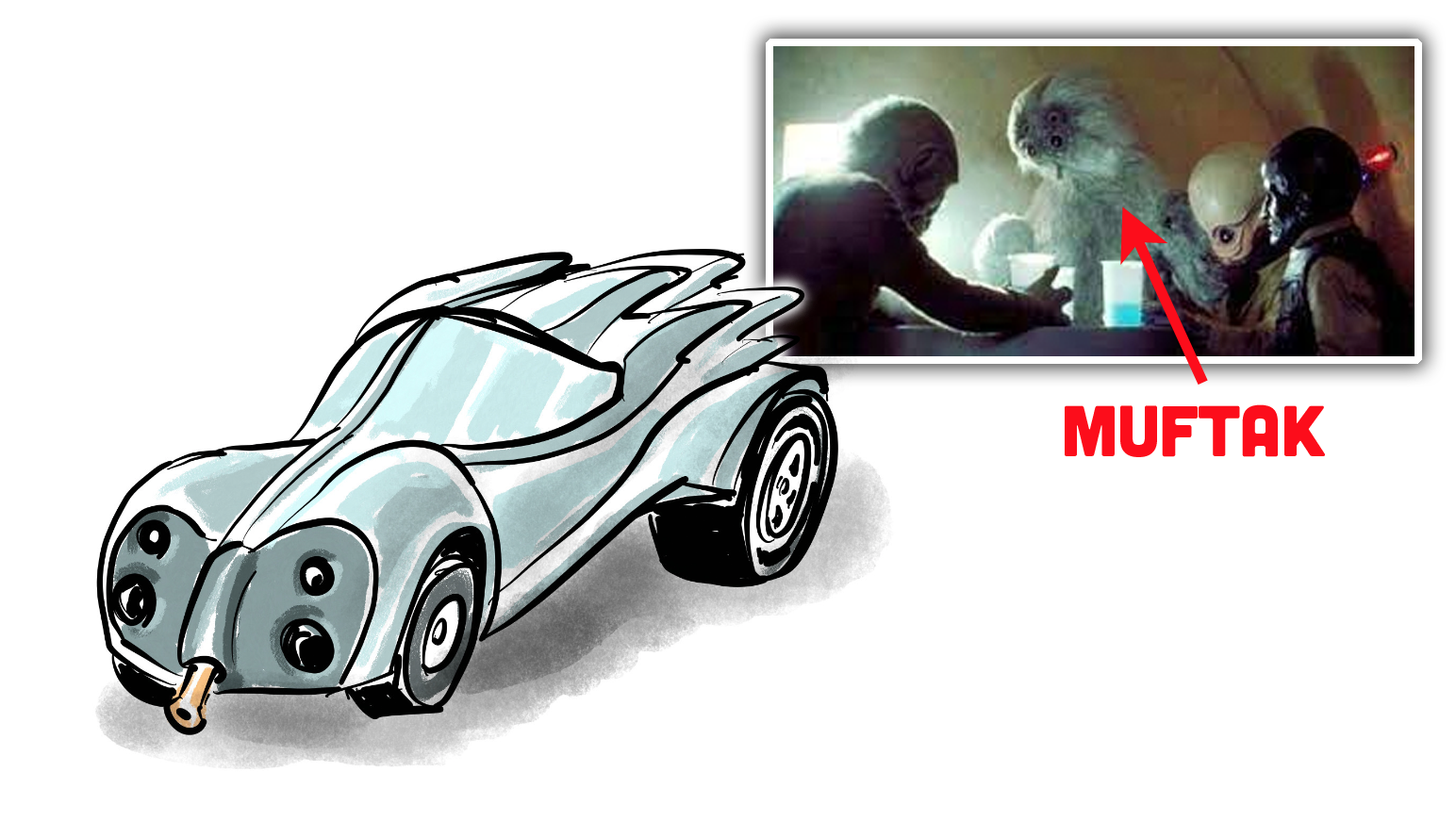 That four-eyed Yeti/moth alien hanging out with other various aliens and monsters at the Mos Eisley cantina is known as Muftak, and nobody wants him as a car, either. I bet it’s because of that creepy flesh-colored mouth-tube thing. 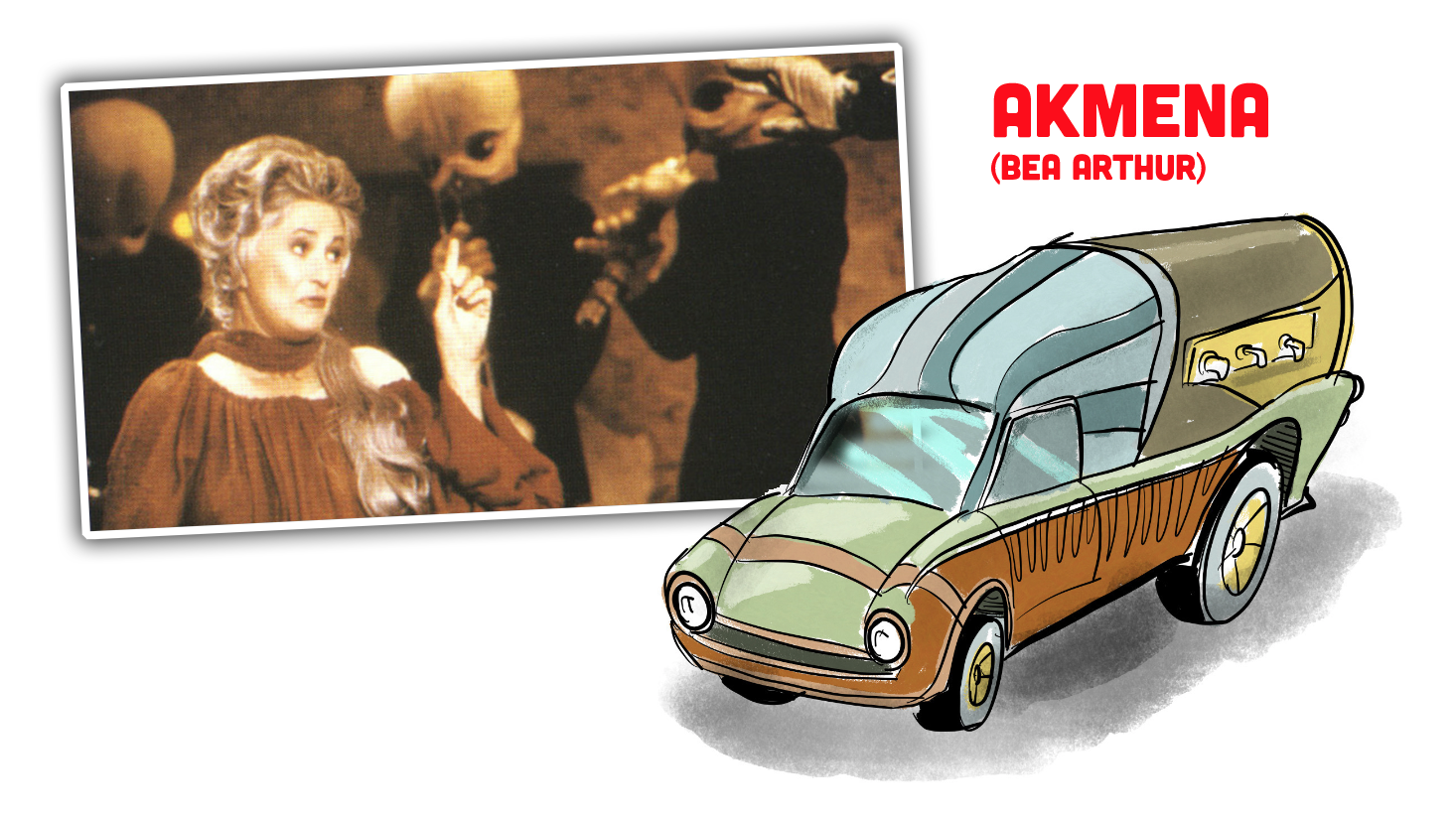 This character, Akmena, only appeared in the infamous 1978 Star Wars Holiday Special, where she was the blousy bartender at Chalmun’s Spaceport Cantina on Tatooine, a planet that’s seemingly lousy with cantinas.

Our simulations suggested that this Hot Wheel version of the character could be the elusive and long-sought bridge between Star Wars, Golden Girls, and Hot Wheels fandoms, but our simulations also suggested that Bea Arthur’s estate would not have consented to have her automotive likeness made into a toy, as her estate has signed a contract with Stellantis to have her physical traits used for the design of the upcoming 2024 Chrysler Imperial EV.

I'm a co-founder of the Autopian, the site you're on RIGHT NOW! I'm here to talk to you about taillights until you cry and beg me to stop, which I absolutely will not. Sorry. Hug? Also, David's friend.
Read All My Posts »
PrevPreviousHere Are Three Ways That Car Audio Systems Trick Listeners Into Thinking They Sound Good
NextCold Start: Check Out These Small Gray Car Fans Losing ItNext