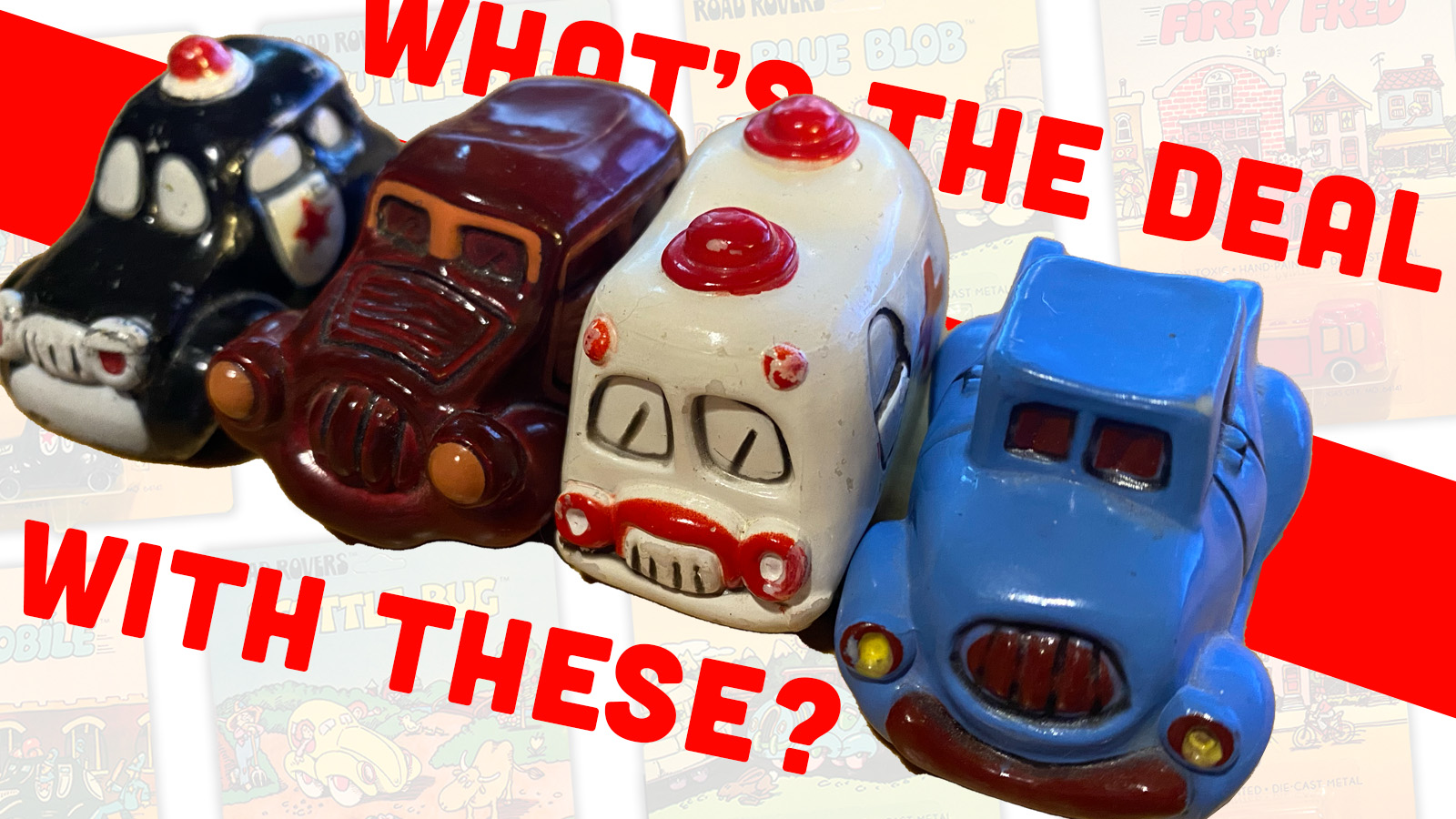 In a little detail about my life that will likely shock precisely nobody, my desk is pretty well covered with little toy cars and robots and electrical components that are fun to hold and other, you know, crap. My kid, Otto, likes to come down and inspect all the crap for treasures he may have missed on prior inspections, and the other day he hit paydirt: nestled amongst all the other stuff on the weird shelf above my desk lurked four peculiar little toy cars, decidedly different than any of the other toy cars on the shelf, or, really, in any toy aisle or rack at a drugstore. That’s because my toy cars are relics of not just an era long gone, but a whole aesthetic that, while maybe not completely extinct, is at the least endangered. It’s an aesthetic that I think grew from the underground comics movement of the 1960s, became weirdly mainstream in the 1970s, and mostly died out by the late 1980s. But, before that happened, it gave birth to some of the strangest little toy cars to end up in sweaty kid hands. Let’s look at these.

I have four of them — a kind of sad-sack-looking cop car, what seems to be some kind of woody wagon, a lumpy ambulance, and a little blue pickup truck: 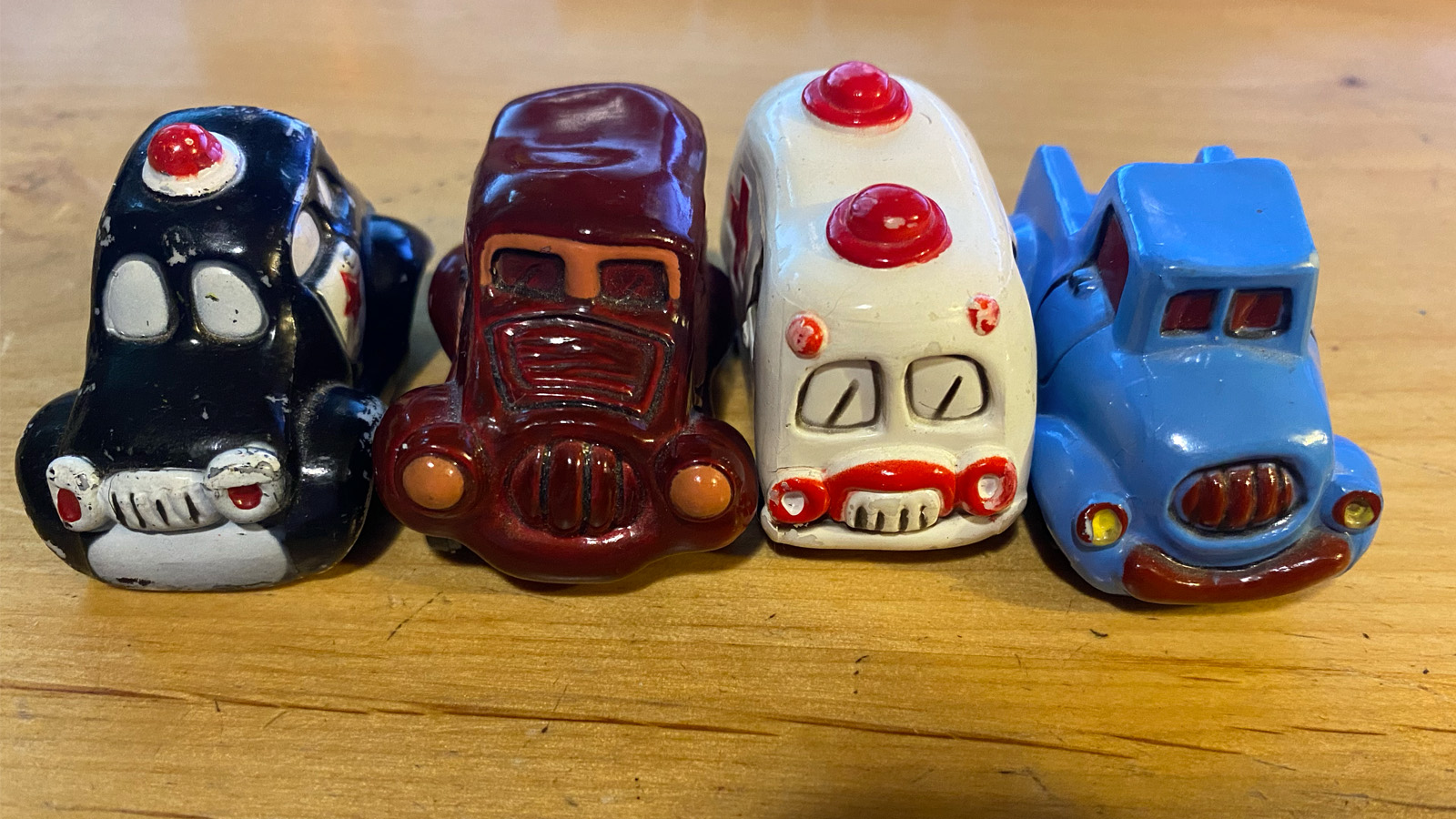 All the cars are plastic, but look like they’ve been sculpted out of clay or plasticine, perhaps by someone not entirely sober. The toys have a sort of whimsical, haphazard look, a little misshapen and forlorn but also charming and full of character. So what the hell are they? They’re Funkymobiles! Made by the Wallace Berrie & Company corporation (then Applause, which is gone now), whom you may know best because in 1979 the company got the global rights to crank out Smurfs — you know, the little blue beings who used their own name as a catchall part of speech as often as possible. These guys: 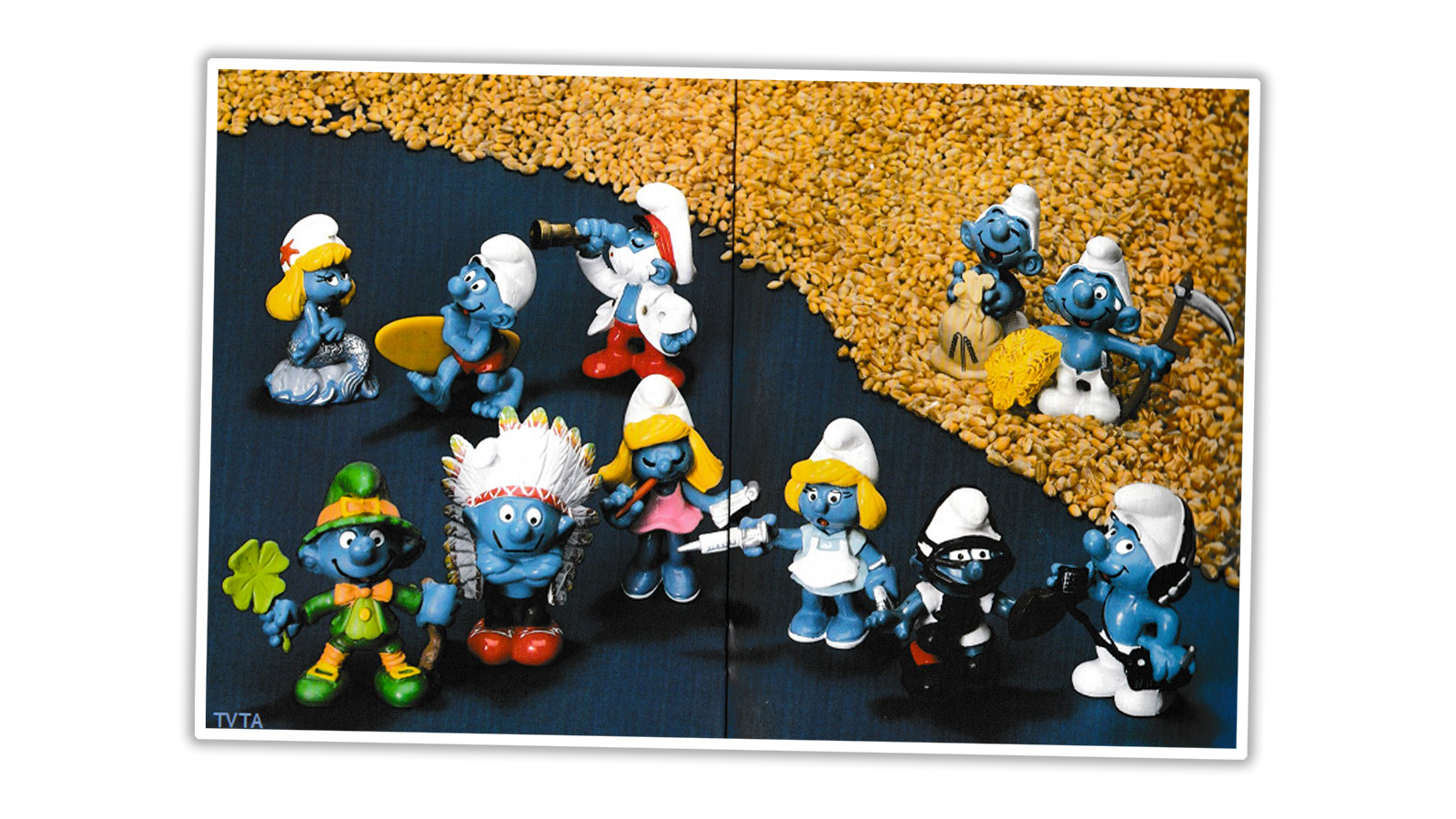 So, Wallace Berrie made these guys, which I’ve known because the name was mouled into the plastic on the bottom. I had always thought that these were the strange creations of old Wally B, but when I was researching them I found what seems to be the one page on the internet that goes into the history of these ridiculous things, and that’s when I had my mind blown: Funkymobiles are a knockoff.

Go ahead and take a moment to wipe off the no-doubt generous aftermath of your spit-take from your monitor, and take an extra moment if chili was involved. Because here’s the truth: Funkymobiles, made in 1976, were actually pretty blatant copies of a line of cars called Road Rovers, licensed by Hallmark from yet another company, LJN Toys, back in 1974.

So you can understand the level of knockoffery we’re talking about here, this is how I remember, for example, the Funkymobiles I own being packaged: 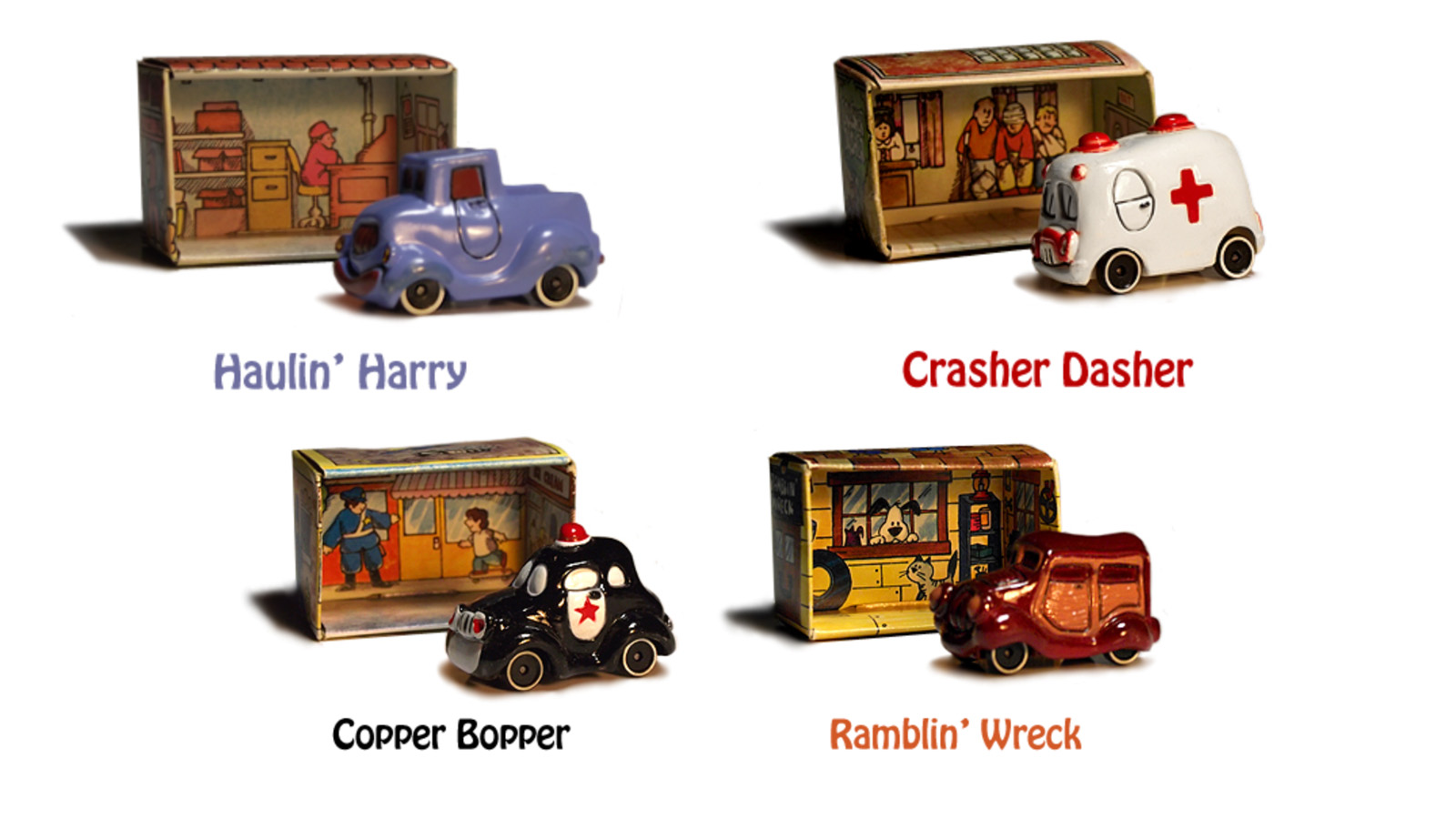 I don’t have the little boxes anymore, but I remember them: they were little illustrated tableaus, little scenes of where the cars would have existed, rendered in the same cartoonish and sort of loose style of the cars themselves. They also had a little clear plastic sleeve you could slide on and off. Okay, so now, take a look at some Road Rovers in their packaging, from a bit earlier: 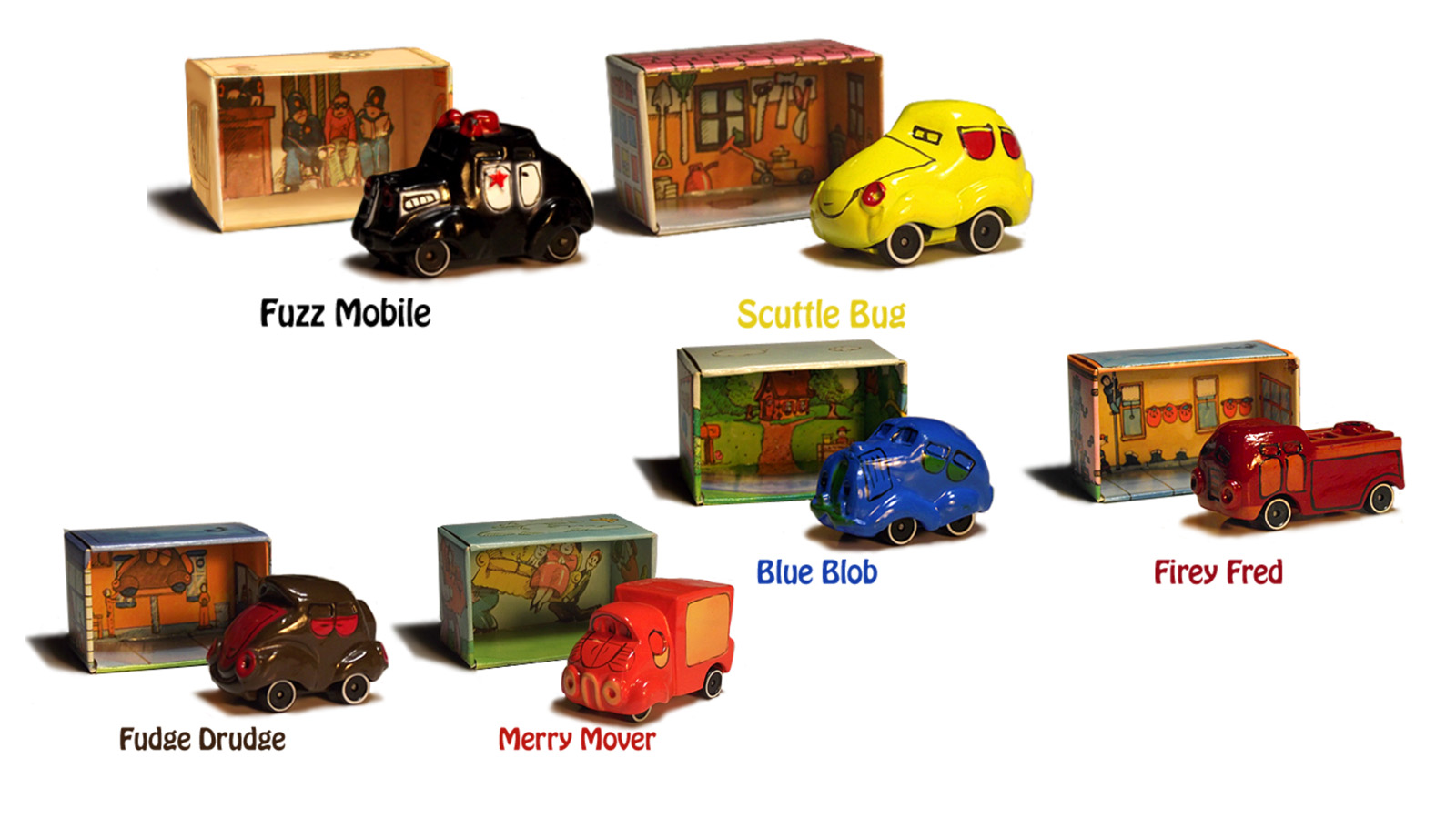 Heeeyyyyyy. Those Road Rovers there were from 1975, and the first Funkymobiles came in 1976. There’s no real defending the Funkymobiles here, really: they saw something that worked for Hallmark and made about as blatant a ripoff as you could get away with, from what I can tell. Especially the cop cars up there, which look like two- and four-door variants from the same municipal police department, and even the box art is remarkably similar, as Darren Wheeling points out in his writeup of these, using the two fire truck examples:

Look at the basic scene in there: fireman on pole, windows with those circle-on-a-string pulls, boots by the floor, hats hanging – nothing unexpected for a fire station, but it really looks like the Funkymobile artist was tossed a Firey Fred and told to make that, but, you know, different.

The big difference between the Funkymobiles and the Road Rovers is that the Funkymobiles were made of injection-molded plastic, while the Road Rovers were die-cast metal. The plastic allowed for a bit more detail in the mold, so things like door cutlines are actually incised and not just painted, but overall the look and level of detail are remarkably similar.

So, let’s get back to this whole look, because that’s what makes these little cars so novel and strange. It’s actually not really a look you see rendered in three dimensional objects, like these cars are, but the aesthetic does seem to translate, partially because the handmade nature of the cars feels almost illustrative: 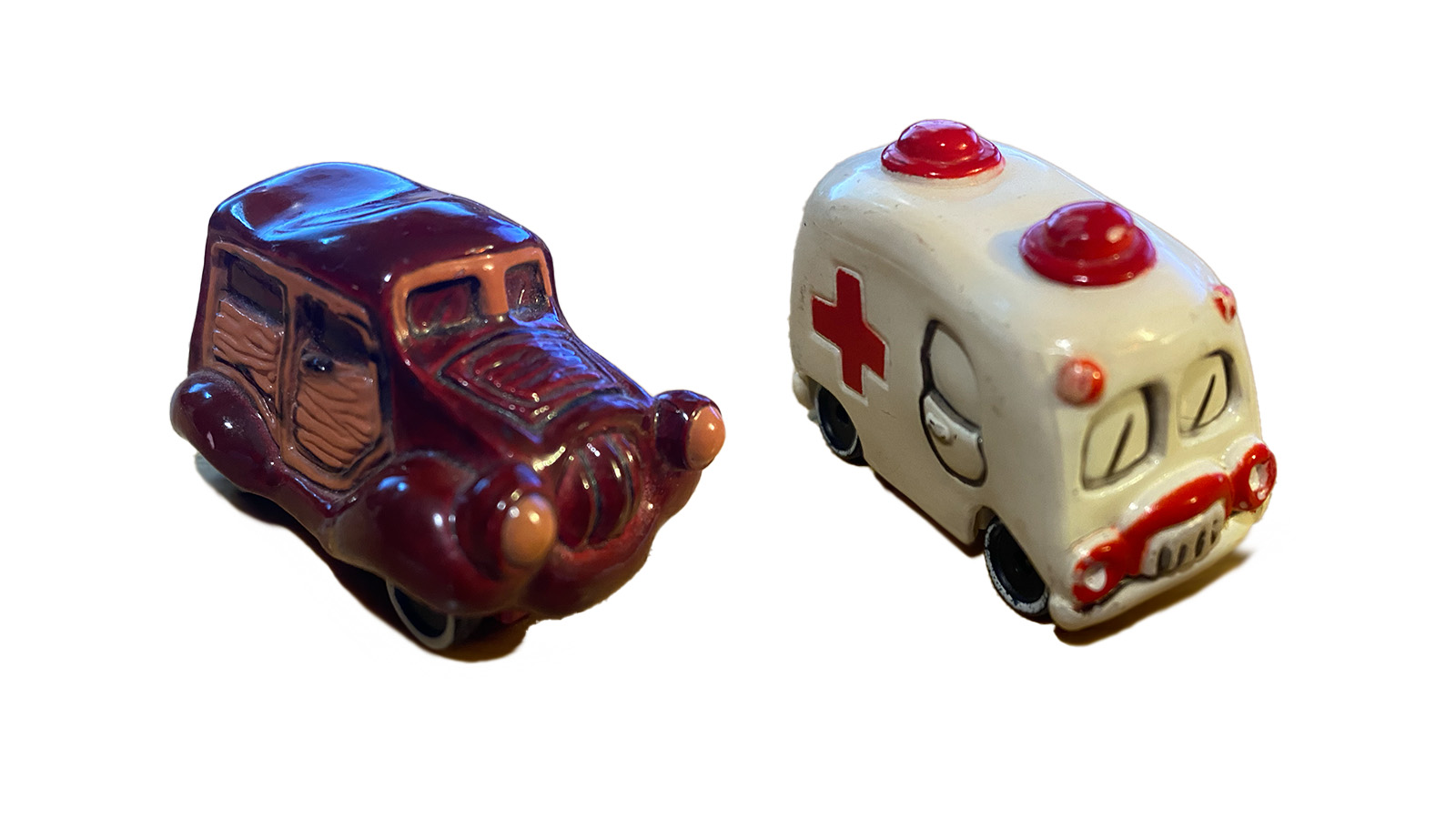 Really, they’re like toy car sketches, quick and dirty, but somehow rendered in plastic you can hold. If you look at the original blister packs that Road Rovers came in, you can see much more obvious illustrations:

If you look at these, I think it’s pretty clear that the original inspiration for this look came from the root wellspring of the underground comics movement of the late 1960s, especially the work of R.Crumb, and then mainstream-ized via the somewhat sloppier, less detailed illustrative style of 1970s greeting cards and popular comic strips like the bald, pantless Ziggy. That’s this guy: 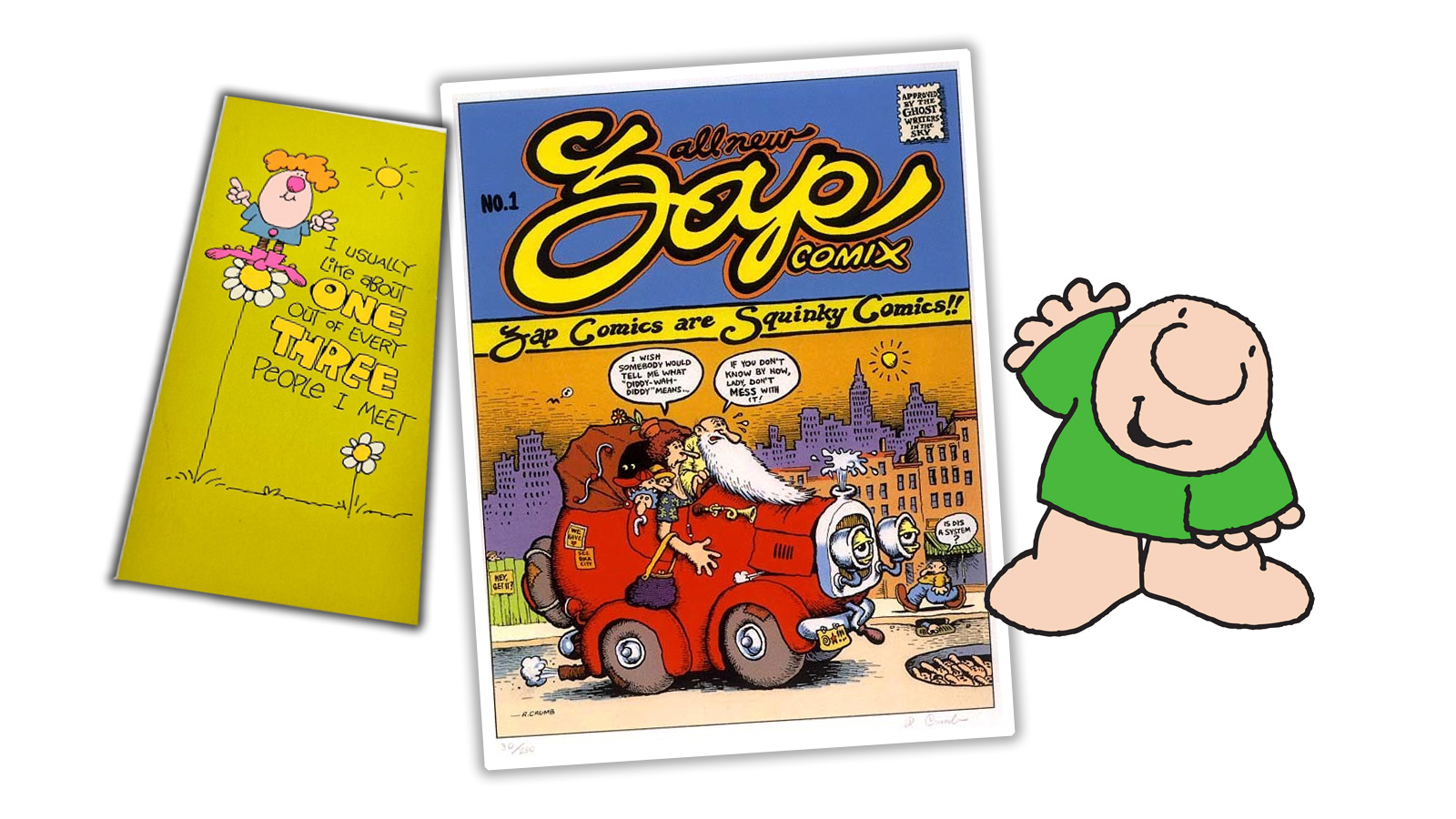 These are unlikely inspirations for something like toy cars, but as you can see on that Zap cover, cars were of course something that wanted, maybe needed to be drawn.

I don’t really feel disappointed that these little weird-ass cars I’ve had rattling around in my life for about 40 plus years turned out to be shameless knockoffs. In fact, that just kind of makes them even better. They’re a product of that childhood decade I remember —  a strange, exuberant, sloppy time. It was a time when a knockoff of a toy car based on a look defined by countercultural underground comics just somehow made sense.

I'm a co-founder of the Autopian, the site you're on RIGHT NOW! I'm here to talk to you about taillights until you cry and beg me to stop, which I absolutely will not. Sorry. Hug? Also, David's friend.
Read All My Posts »
PrevPreviousTwo Shops, Three Engine Removals, And Too Much Oil On The Ground: How My Porsche Cayenne Became A Diesel Nightmare
NextA Man Fitted A Cadillac Brougham With A Tire-Shredding 370 HP Corvette Engine Then Tried To Sell It To The PublicNext