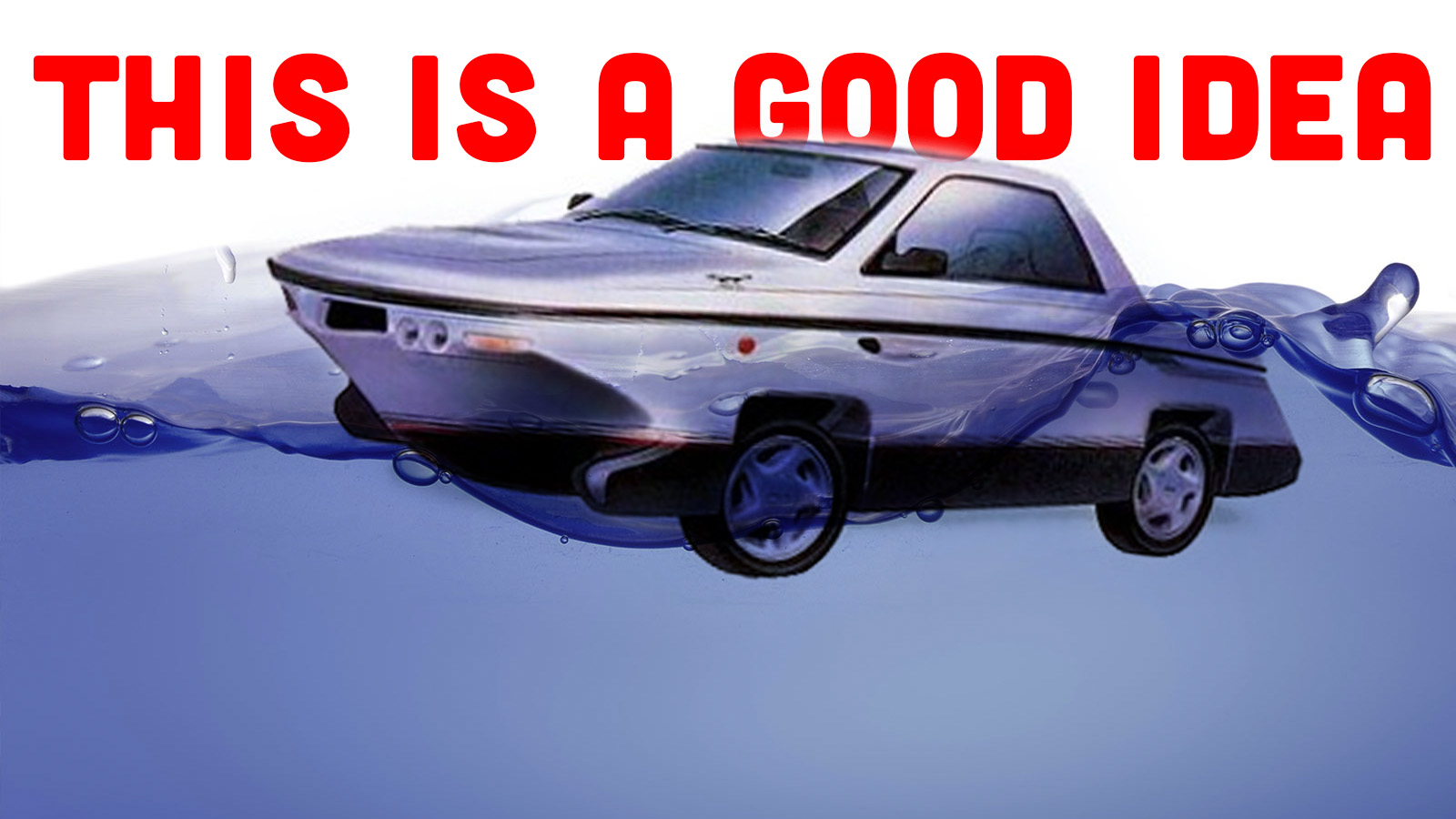 I’ve certainly been accused of liking weird cars or having non-mainstream automotive tastes as some kind of performance, as though I’m just doing it for attention or something like that. This, of course, is not remotely true, and it’s an accusation usually leveled by people who can’t fathom a human even can give a shit about anything that doesn’t have a massive V8 jammed under the hood. Most people, though, are more than willing to embrace my peculiar vehicular fetishes without judgement, with one notable exception: my sincere belief that an amphibious car can be a success. Pretty much nobody takes this seriously. But once, back in the early 1990s, Isuzu seemed to think it was a solid enough idea to make a really bonkers amphibious concept car. That car was the very boat-like Isuzu Nagisa. 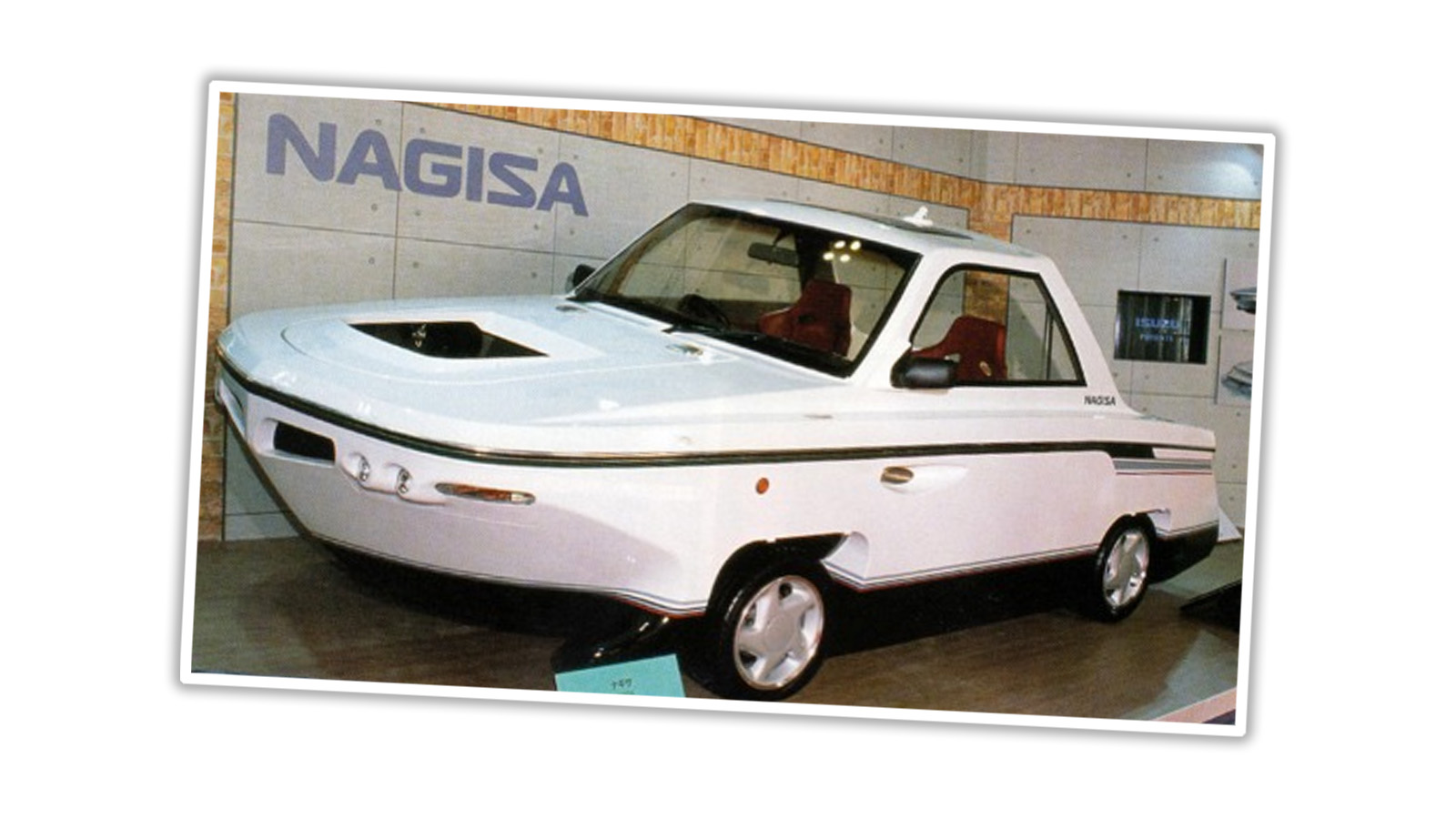 Before I get into the details of the car, let me just politely seize you by the upper arm with a demented grip, as tight and desperate as a jumper cable clamp, and demand that you hear me out when it comes to why I think – no, believe – that amphibious cars make sense. You see, I live in a place where there are lakes around, and I see plenty of boats of various sizes in people’s yards and driveways. And you know what most of those boats do? They sit there. They consume money and space. But people are willing to accept that because, generally, they feel the ass-pain of storage, trailering, unloading, re-loading, maintenance, etc. is mostly worth the enjoyment they get from being able to putter around on the water.

Until it isn’t, of course, then the boats become big, mossy monuments to procrastination and money you can no longer justify spending.

People always say that cars like the Amphicar failed because they were inherently compromised, not a great car or a great boat. I get that. But here’s the secret: it doesn’t need to be great at either! It just needs to be adequate as a boat, and pretty good as a car. Err on the side of car, because people will use it as a car far more than a boat, and really, for most people, all they demand of a boat is something they can easily putter around a body of water in, without sinking, in reasonable comfort.

An ideal amphibious car will be affordable and should operate at least as well on public roads as other vehicles designed primarily for recreation; if it doesn’t make any more driving compromises than, say, a lifted Jeep, I think you’re good to go.

You know what would be a great platform to start with to make an amphibious car? A Ford Maverick. The base car is cheap to get into, so after the necessary modifications, you’re looking at something that perhaps could be sold for, what, $55 to $65,000. I mean, I’m pulling those numbers ex recto, but I believe it’s possible. What the hell, here’s a very, very quick sketch of what I’m imagining: 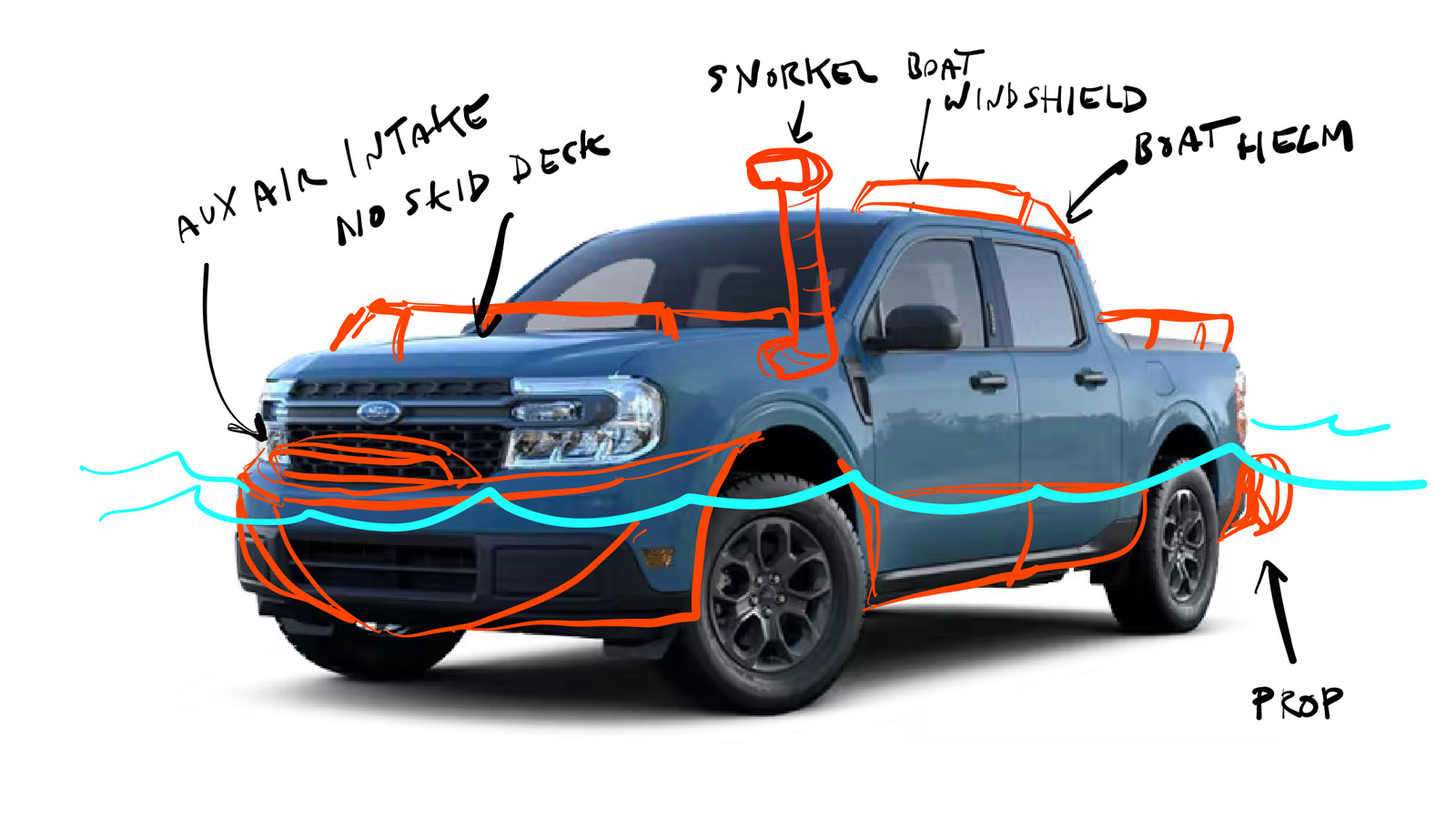 See? A truck is an ideal platform for an amphibious car, because it already has a nice open deck at the back. Trust me, this could sell.

Okay, that was kind of a digression but I think it’s relevant here, because now perhaps you can imagine the thought process going on in the head of whatever Isuzu executive greenlit the Nagisa. Well, to be fair, while I’d bet at least some of the same ideas were considered in the context of the car as a leisure vehicle/pleasure craft, what’s even stranger is that one of the motivations for Isuzu to make an amphibious vehicle was as a way to help alleviate traffic congestion in Tokyo.

Yes, the story is – and I regret I have yet to be able to confirm it definitively with some documentation right from Isuzu, so it’s possible this is apocryphal – that the thinking was if more people could be moved off the roads and into the water, then that can only help traffic, right?

” And the fact that this prototype was not invented for wealthy clients at all – it was assumed that such a machine would help unload the roads of Japan, in particular large port cities.
It was even planned to create a whole family of boats (small amphibious trucks and compact amphibians the size of kei cars were patented), but Nagisa sea trials showed that the idea was difficult to implement – this car turned out to be too slow and clumsy on the roads, and on the water it lacked stability. “

Honestly, based on the design and specs I’m surprised that it didn’t perform better in the wet or dry. Unlike what’s likely the best-known amphibious car, the Amphicar, with its little 1150cc 43 horsepower engine, the Nagisa had a 3.2-liter V6 which made a respectable 175 hp, good enough for the car to comfortably hold highway speeds.

The Nagisa had all-wheel drive as well, leveraging Isuzu’s extensive experience there, and used an impeller-driven water jet engine, like a Jet-Ski, in the water.

Design-wise, it’s pretty clear that the main focus was boat instead of car. This is a fundamentally different concept from, say, the Amphicar, which looked like a car that could go in the water; the Nagisa looks like a boat that can drive on land. I think a modern successful amphibious car needs the opposite approach: it should look more car-like.

The Nagisa unashamedly went full boat. It has a real, dramatic prow, a hood that looks more like a deck, it’s nautical white, it just feels like a cool little speedboat. It doesn’t even appear to have conventional doors. 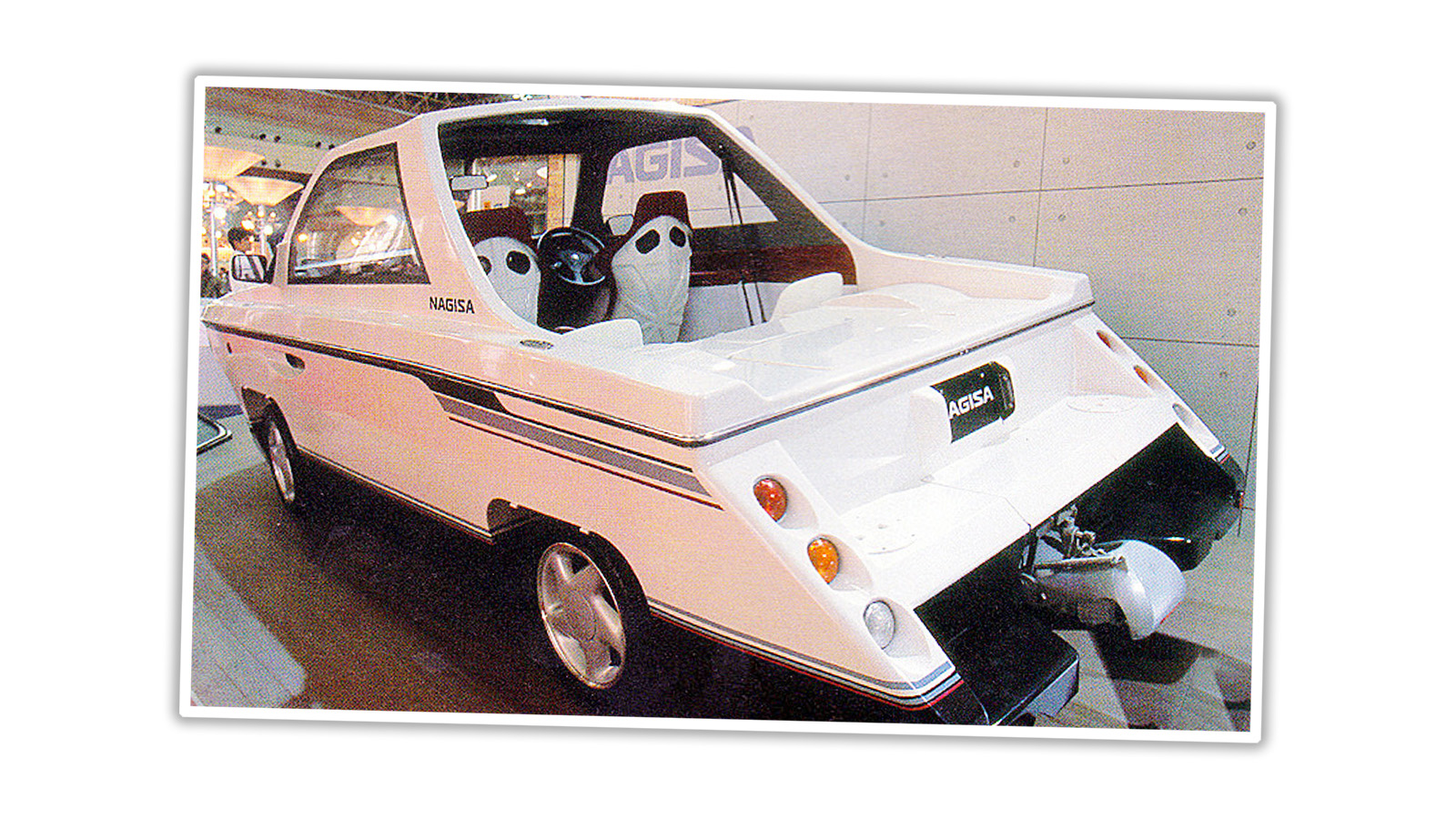 Around the stern, it’s even more boaty, if possible: there’s an actual deck, the cabin is open to the elements, and other than the wheels and taillights, you could easily mistake this for a water-only boat. It seems Isuzu mentioned a cap to enclose the rear, useful for the winter, when you would likely only be using this to get to and from work or whatever. I’d still think you’d have to enter from the rear, though.

Sure, the Nagisa likely leaned to hard to the boat side of things, but I’m not dissuaded from my belief that the world needs a viable, practical amphibious car. Automakers that want to make bank, you know how to contact me.

I'm a co-founder of the Autopian, the site you're on RIGHT NOW! I'm here to talk to you about taillights until you cry and beg me to stop, which I absolutely will not. Sorry. Hug? Also, David's friend.
Read All My Posts »
PrevPreviousThe Latest Formula 1 Shitshow Explained
NextAuto Union 1000, BMW 760Li, Suzuki RE-5: Mercedes’ Marketplace MadnessNext