As many of you may be aware, I have extremely strong opinions regarding the portrayal and placement of eyes on anthropomorphized cars. This is obviously a subject of great, even dire importance to our daily lives, so when I encounter a notable example of automotive eye placement, I feel it is my honor-bound duty to report it to you, and evaluate its overall value and societal impact. I take this responsibility very seriously, which is why I must report to you with no joy that I believe I have encountered a heretofore untried manner of automotive eyeball placement, and it is with sincere regret that I have to say that it is awful, just awful — an affront to the very idea of automotive anthropomorphization, a deeply creepy misstep that I dearly hope I can prevent from ever being repeated. It is the eyeball placement on a 1970 Porsche 914 race car built for a Pikes Peak run in 2012, sponsored by, of all things, Focus on the Family.

I guess the car is really more themed in Adventures in Odyssey livery, which seems to be some sort of Christian-themed audio drama series involving an old guy with an ice cream shop and a lot of wholesome goings-on that end with some manner of evangelical messages, I guess. I’m not familiar with the property, to be honest, for reasons I’m guessing you can figure out.

[Editor’s Note: Jason has spoken with the creators of Pixar’s Cars series, and has written ad nauseam about how the franchise screwed up the location of the characters’ eyes. He’s also written a culture-shaping piece about the Little Tikes Cozy Coupe’s resurgence from the pits of hell. This article is a continuation of his crusade. -DT]

This 914 looks like it was prepared really well; it’s referred to as a 914-8, so I suspect it’s got something in there other than the original VW Type 4 2-liter flat-four. Unless, you know, it has two of those or something. It’s driven by Jeff MacPherson, you know, like the strut, and he seems to have run it at Pikes Peak a number of times. Here it is in 2014:

He seems to run the Porsche with different sponsors and liveries, but I just want to focus on the 2012 run, when it had the Adventures in Odyssey livery, because this is what it looked like: 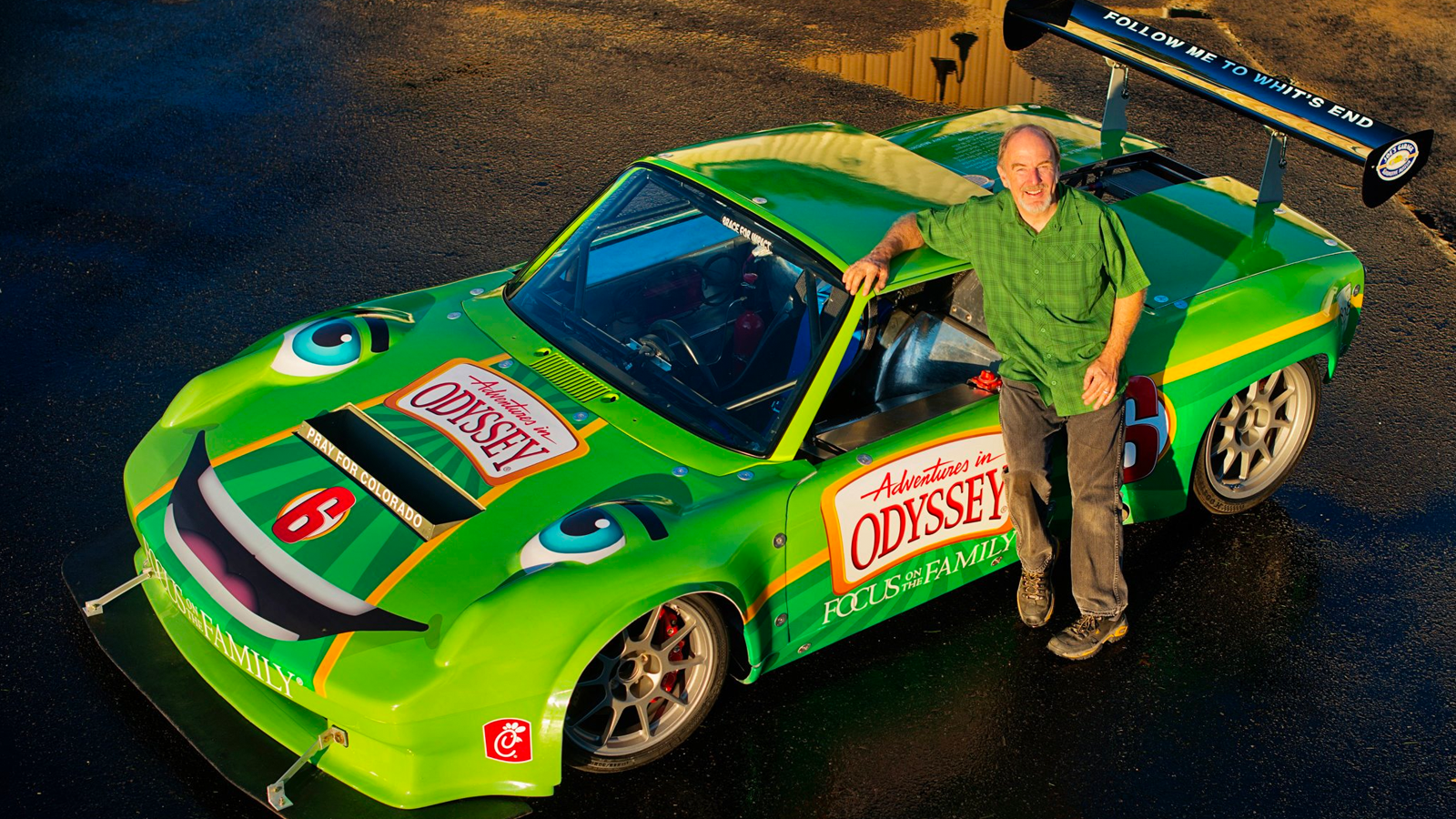 See what I’m talking about there? Those eyes. Why, why, why would you choose that location for car eyes? They’re on the fenders, pointed up. Straight up! This makes no sense at all.

I get that a 914 is a challenge when it comes to adding anthropomorphic eyes; it has pop-up headlamps, so the eyes appear, in their natural state, closed — hardly the look you want for an alert race car on the go. 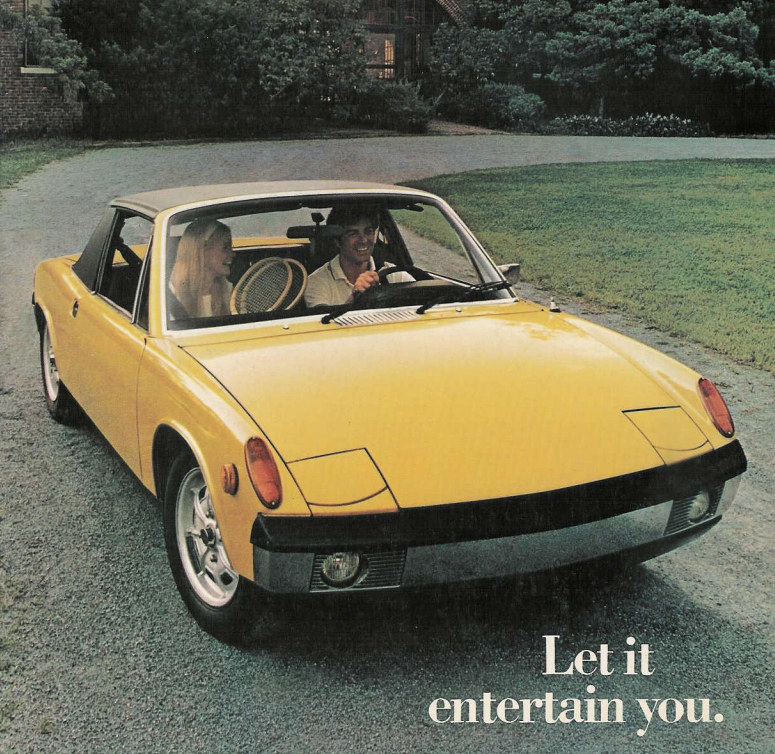 But, by the same token, the headlamp covers are in the ideal location for painted-on eyes, right there on the car’s face, and had the eyes been placed there we’d all be completely happy and I wouldn’t have to undertake this miserable exercise. But that’s not what happened. 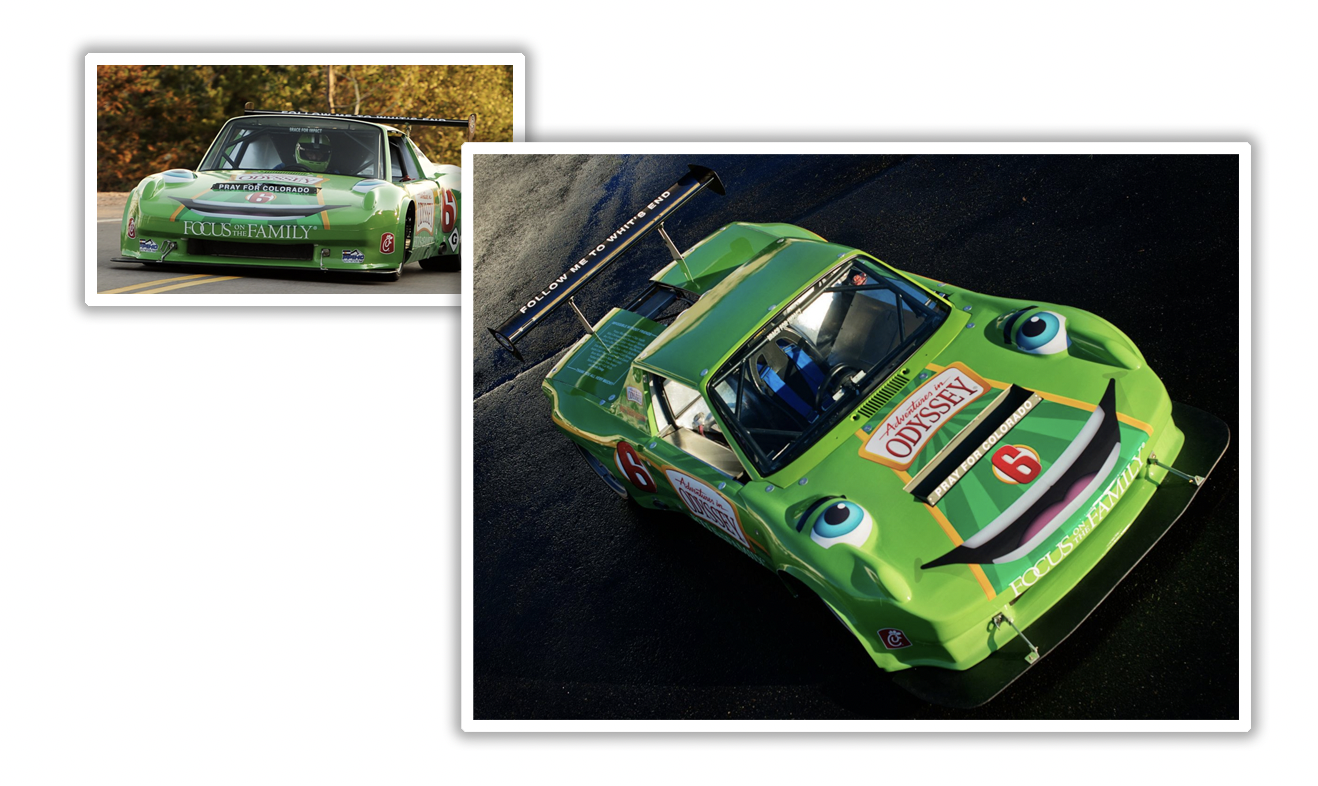 Look at the car from the front there; you can barely make out the eyes, and they’re not pointing remotely in the direction the car is going. It looks like it’s not paying attention, and that’s a fucking problem.

From a more overhead view, the expression of the car’s strange face is one of eyes rolled back in a head, like the expression a cartoon animal makes after it douses its burning ass using a bucket of water, accompanied by a dramatic hiss of steam as the burning biscuits are extinguished. It’s also the face one may make during or after a long-postponed and powerful urination.

You know this eye setup is bad when the artist for the Adventures in Odyssey series was commissioned to draw the car, and the only way he could make it work was by cheating the eyes into a forward-looking position that is not accurate to the actual car: 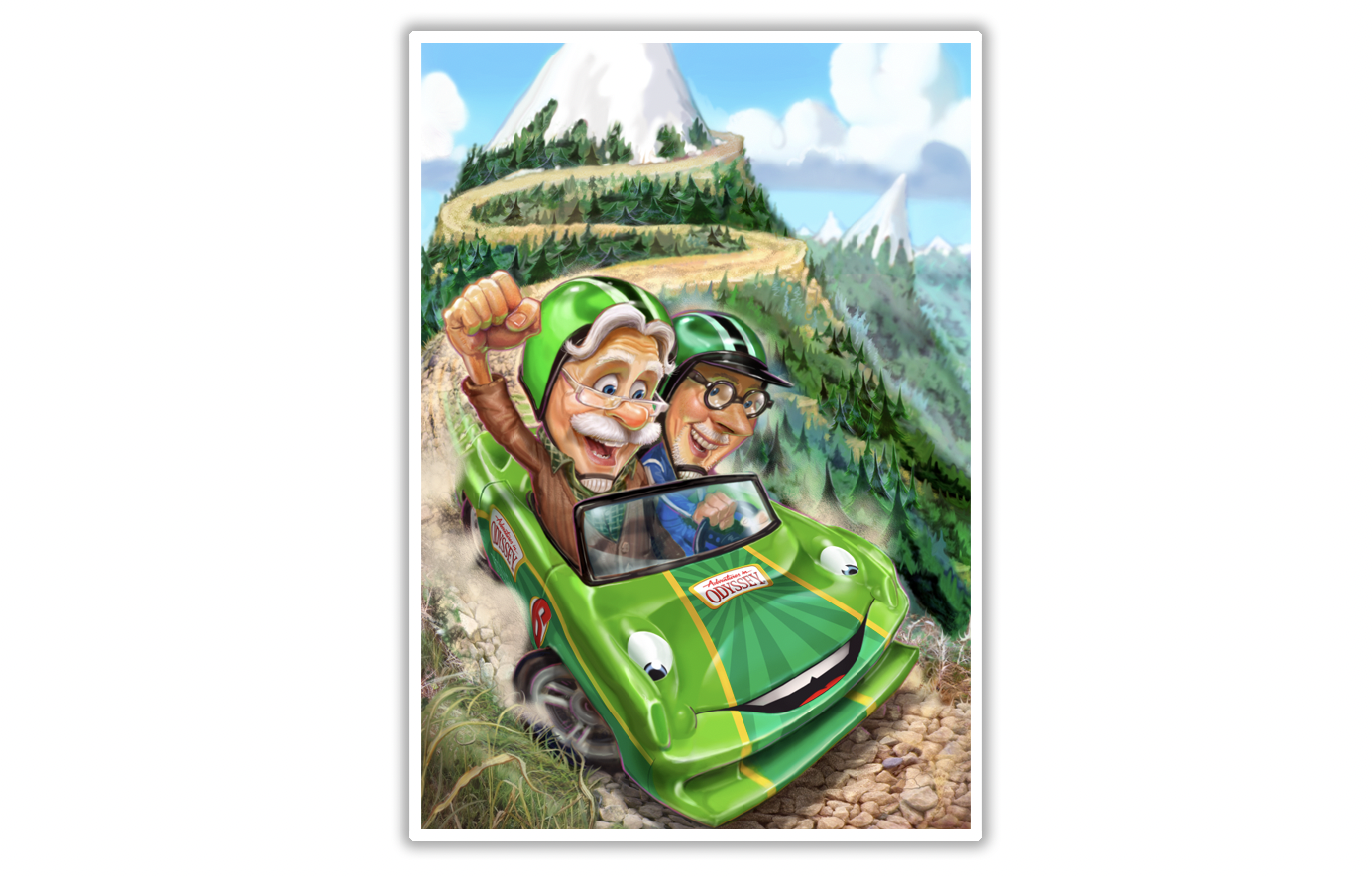 See? This illustration is a tacit admission of failure, not on the part of the artist, Gary Locke, but on the part of whoever designed this nightmare of a livery, a name I won’t search out of an unwillingness to humiliate them further.

Maybe the upward-looking eyes were something to do with turning your face to God or something like that, since this is a religious sponsor, after all? Could that be what’s going on here? Maybe? Even so, I think any deity who loves humans would rather you push the idea of looking where you’re driving in a race situation, but maybe that’s just my own biases.

I appreciate that the eyes are at least not on the windshield, but this – eyes on two lumps atop the hood, right on the front axle line, likely directly over the custom shock towers — this, this just doesn’t work.

I'm a co-founder of the Autopian, the site you're on RIGHT NOW! I'm here to talk to you about taillights until you cry and beg me to stop, which I absolutely will not. Sorry. Hug? Also, David's friend.
Read All My Posts »
PrevPreviousThis Video Of A Jeep Gladiator Driving Down A Highway Without Left Tires Is Baffling
NextCold Start: The Old Giant Flower In An Inky Nothingness BitNext