The paint has barely dried on the 2023 Toyota Prius, but Toyota’s already gone to town with a set of appearance packages. Let’s run through them to see what the fun departments of Toyota have been cooking up.

Before we get into these Prius body kits, let’s start with a bit of background information on Modellista. A bit like how Mercedes has both Maybach and AMG, Toyota has its own range of in-house tuning companies. There’s Gazoo Racing which handles all the really quick stuff, TRD which plays in a roughly similar arena as Gazoo Racing, and Modellista, which makes things look a bit funkier. If you’re familiar with Autech’s current role in the Nissan ecosystem, Modellista will make sense. There are no real performance tweaks or even race-inspired visual changes here, just different style for the sake of different style. 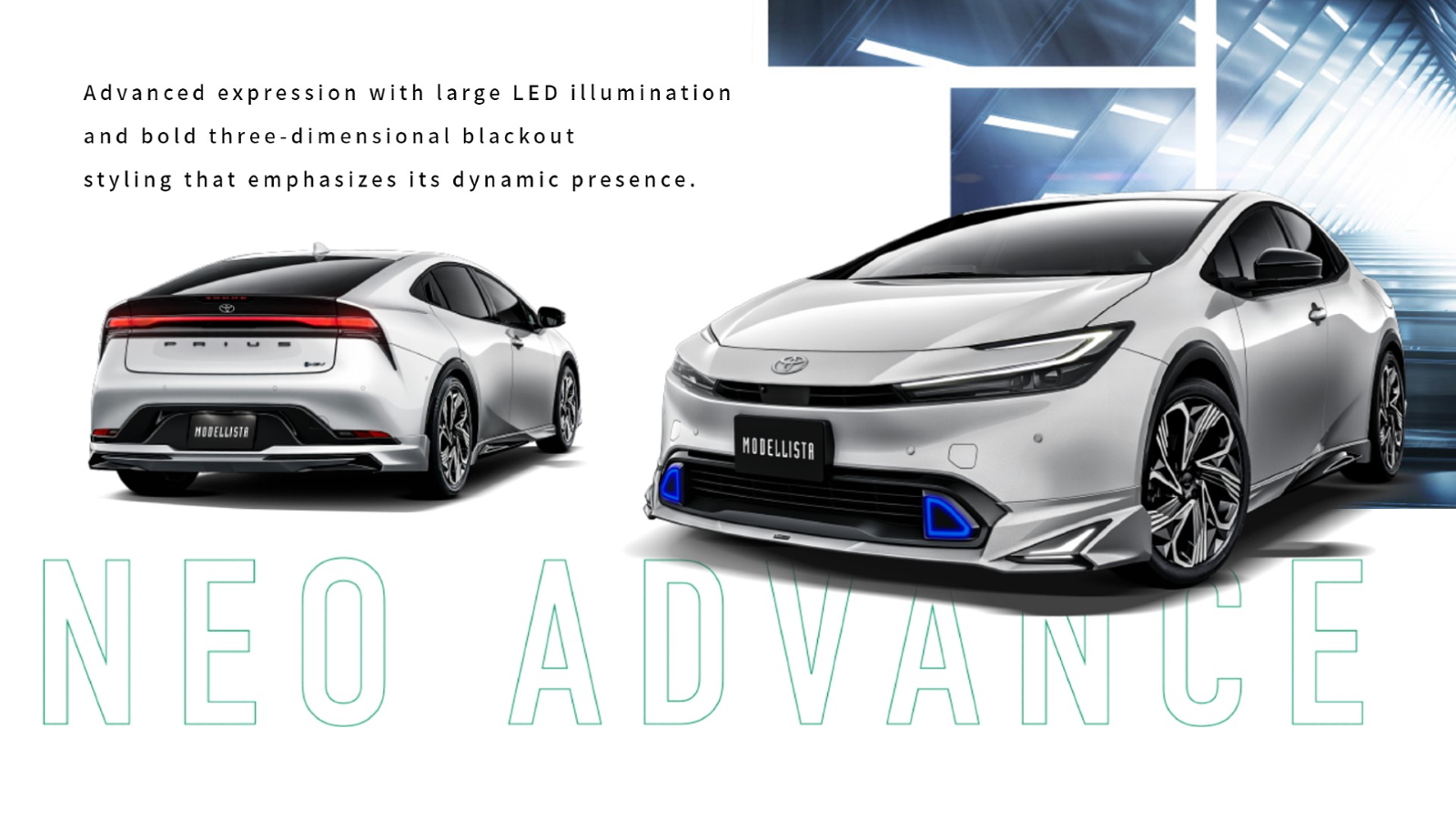 First up, it’s the Prius Neo Advance Style, which seems like an appropriate name given that this Prius is new. The kit certainly advances the amount of things 3M-taped to the car, and it’s most definitely some form of style. It’s a bit garish overall, but there are some smart touches going on. The outer sections of the front lip rise above the grille trim extensions, sufficiently modifying the front fascia without going to the expense of molding a new bumper cover. In addition, giant LED accent lights on the outer edges of the front lip are a pretty good reason not to curb the bodywork, for lighting is generally more expensive than painted plastic. Mind you, I have a gut feeling that the blue lights in the grille aren’t entirely legal in most jurisdictions. 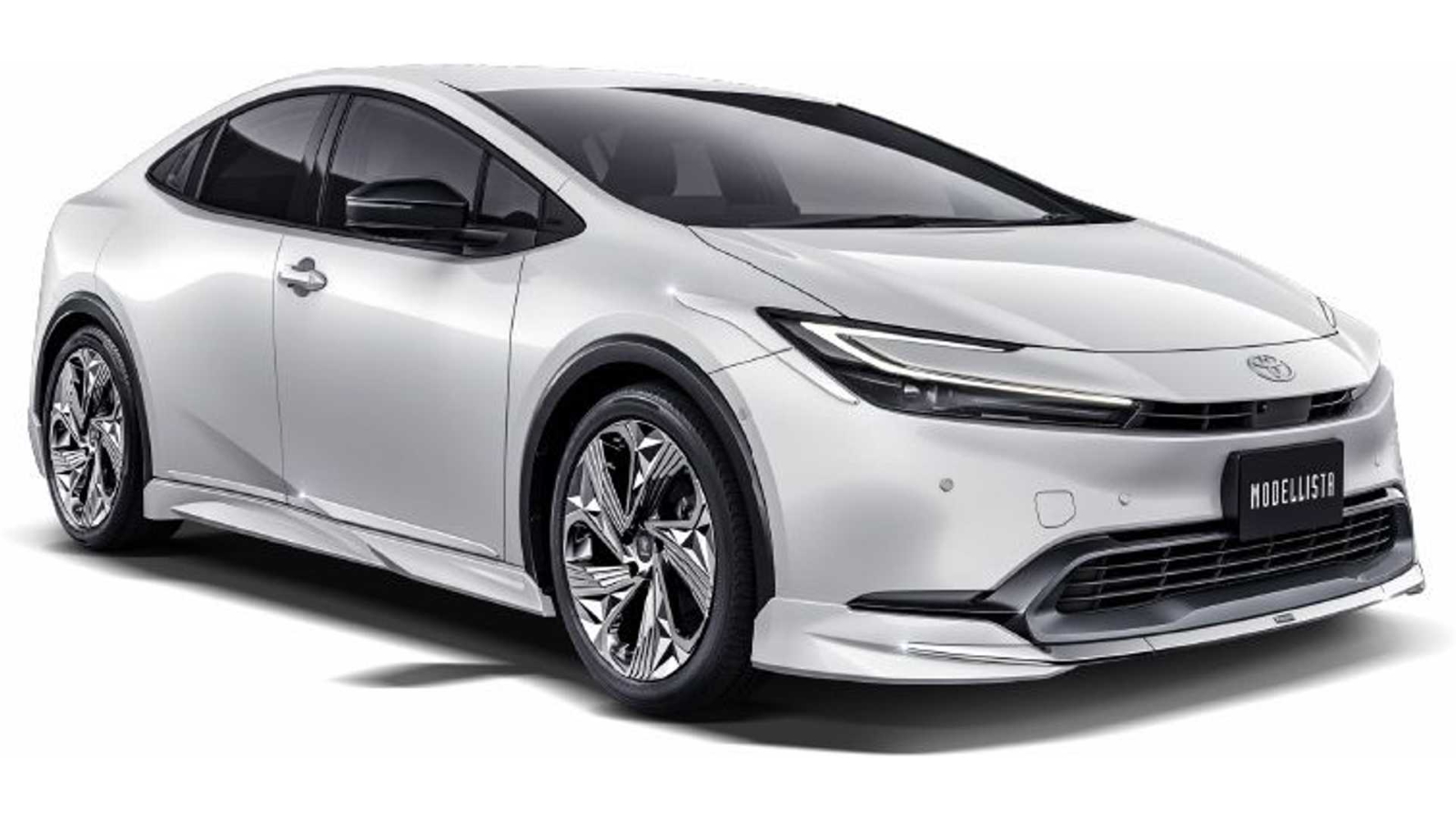 Moving on to the next kit, it’s the Elegant Ice Style model. I know what you’re thinking: What the hell is Elegant Ice Style [Editor’s note: Pretty sure this is a rejected Stephen Malkmus lyric – MH]? As someone who spends several months of the year in a frozen wasteland and once owned something with Brougham badges, here’s exactly what it means. Modellista’s Elegant Ice Style is a healthy smattering of chrome on the nose and the arse of the new Prius. Think late-model Mercedes-Benz C-Class coupe or Kenstyle’s kit for the Mazda CX-5, and you’re on the right track. It’s a more subdued visual package than the Neo Advance Style kit, with far less blue accenting and LED lighting. I’m generally a fan of this kit as it isn’t too loud and seems to take inspiration from streetwear like Chrome Hearts, although I could definitely do without the chrome by the headlights. 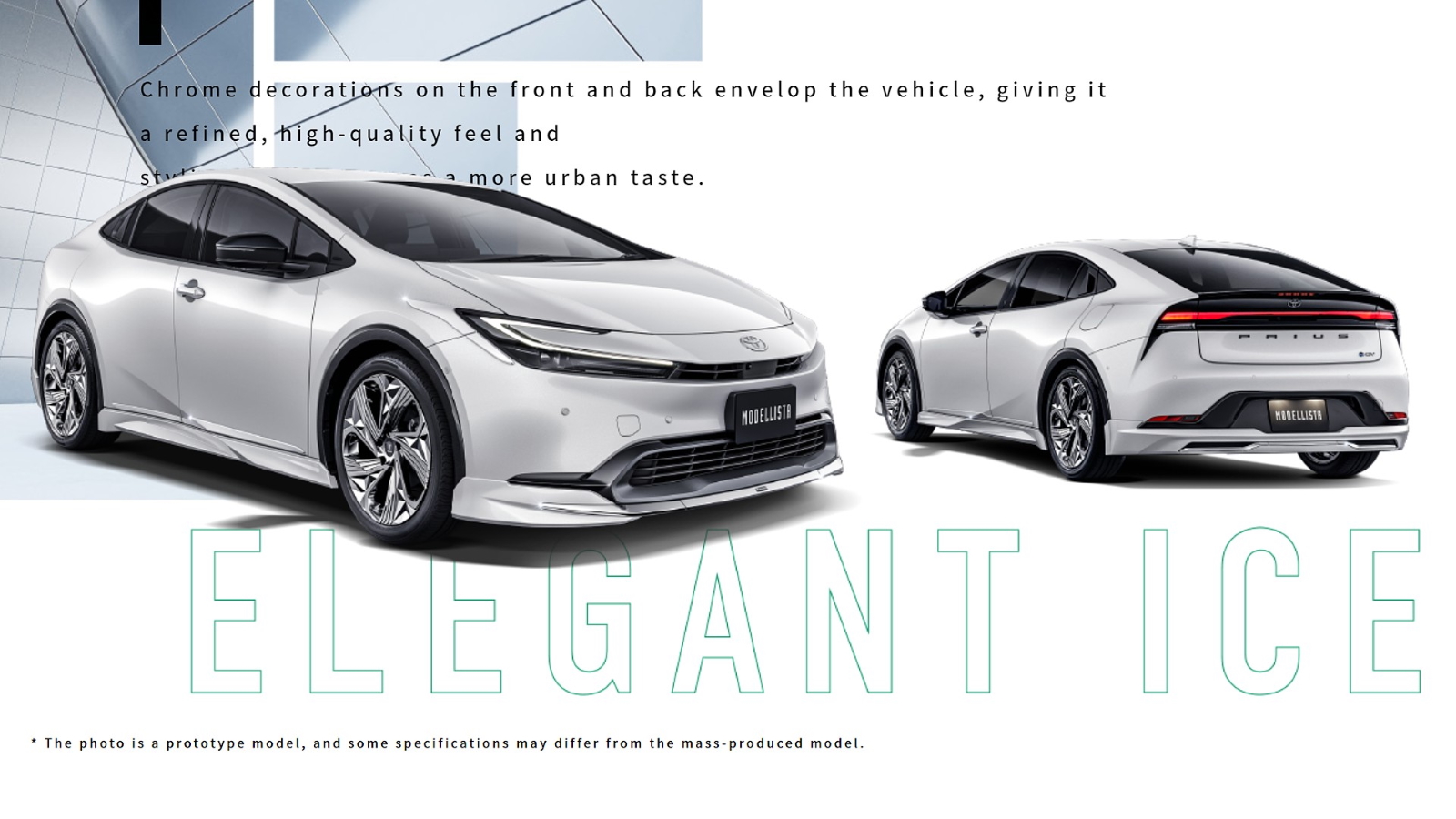 Regardless of which kit you choose, a snazzy set of unique alloy wheels is included, finished in a dark shade with cut faces on the Neo Advance Style model and in a lighter tone on the Elegant Ice Style. Sadly, I wouldn’t count on these appearance packages being available outside of Japan anytime soon. While some parts counter punters may take Toyota up on these tweaks, there’s every chance they wouldn’t sell brilliantly in America.

However, this isn’t the last set of in-house tweaks Toyota will make to the new Prius. After all, the outgoing model had a GR Sport version consisting of appearance and suspension tweaks, and the new car’s performance makes it seem all the more deserving of such a treatment. Come on, a manufacturer-quoted zero-to-62 mph time of 6.7 seconds puts the new plug-in Prius in the same league as the screaming 2ZZ-powered Matrix XRS, that’s still plenty quick for a regular hatchback. 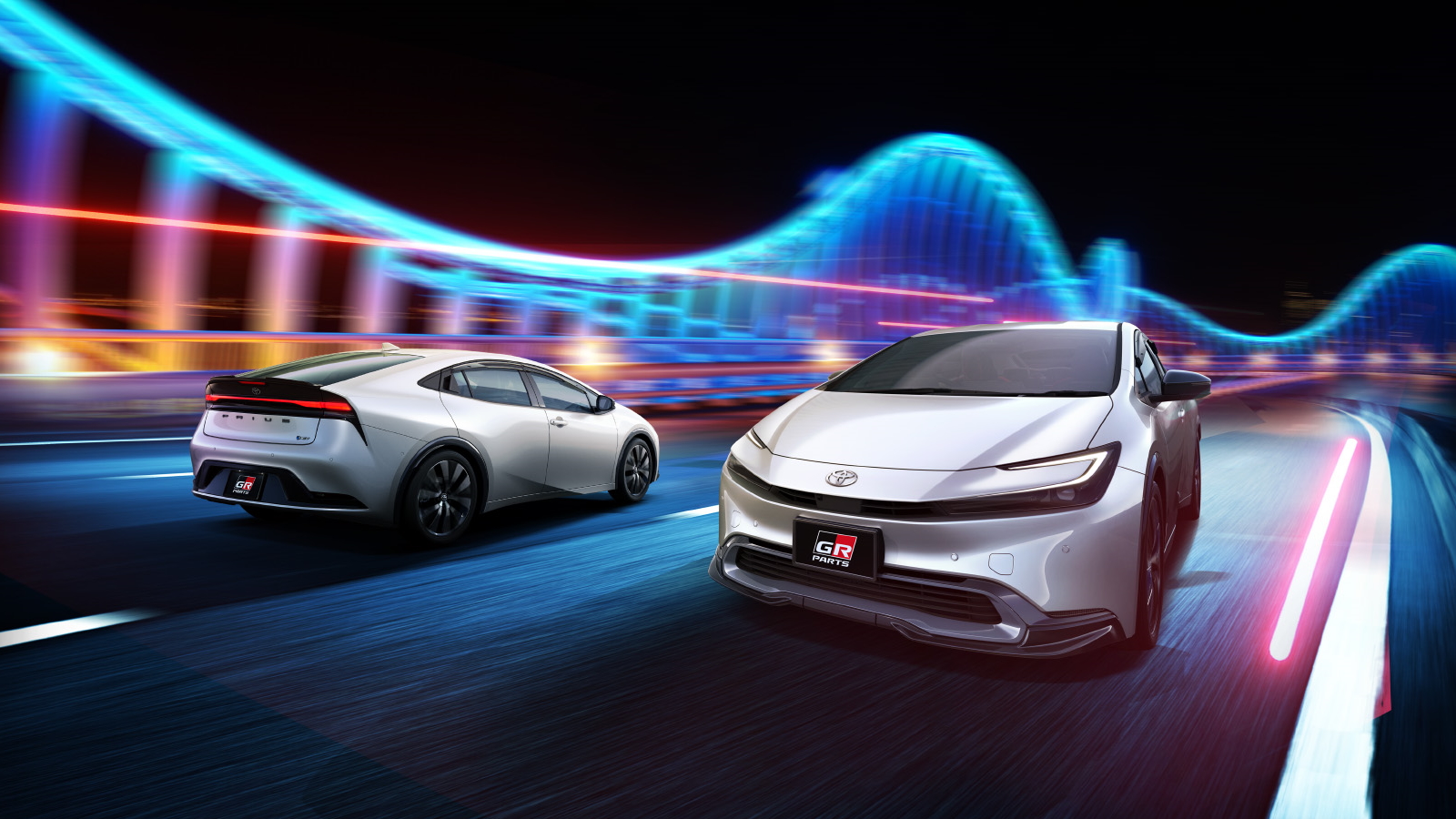 As it turns out, Gazoo Racing is one step ahead of things, releasing this image of two mildly altered Priuses. Granted, there isn’t much information out there on the GR bits for the new Prius, and using Google Translate on the Japanese TRD website has proven equally unhelpful.

Pursuit of a functional beauty that can be manipulated at will. Styling that pursues a direct steering feel that allows the driver to control both city driving and winding roads at will.

Thank you, Google. Very cool. In any case, let’s run down what we can see from this press photo. A new multi-piece front lip appears reminiscent of the facelifted 86, while the hatch features a little spoiler with what appear to be a Gurney flap situation. In addition, a set of rain visors should let the driver puff on a Marlboro without getting wet. I wouldn’t be terribly surprised if some chassis bits are also bundled in, given the talk of steering feel and whatnot. Either way, we’ll have to wait and see what this package actually entails.

While tweaking a Prius may seem a bit corny, the Prius owns, and has actually owned for a while now. The outgoing Prius Prime had reasonable acceleration, good electric range, beautiful rotation under trail-braking

– MH] and a bombastic if not exactly balanced JBL stereo. I’m convinced it would be a riot with stickier tires, camber plates, uprated brake pads and high temperature brake fluid. The new plug-in Prius variant promises to be even quicker while still riding on the stiff TNGA-C architecture. I’m glad Toyota’s doing some fun stuff with the car already, and I can’t wait to see how much further the aftermarket goes.

All photos courtesy of Toyota, GIF via GIPHY

Thomas is a Nu Rave-blaring, heel-toe downshifting, maple syrup-swilling, chassis-geeking, junkyard parts-hauling, floppy-haired scenester who's been writing about cars since college. His current ride is a 2006 BMW 325i with the six-speed manual gearbox. Instagram: @thomas.hundal Twitter: @thomashundal
Read All My Posts »
PrevPreviousA Daydreaming Designer ‘Four-Door-Ifys’ Some Of America’s Automotive Gems
NextA Disturbingly Close Look At The 1970s RV Technology That Cooked Your Poop As You Drove Down The HighwayNext