Watch What Happens When Police Pull Over A Driverless Car 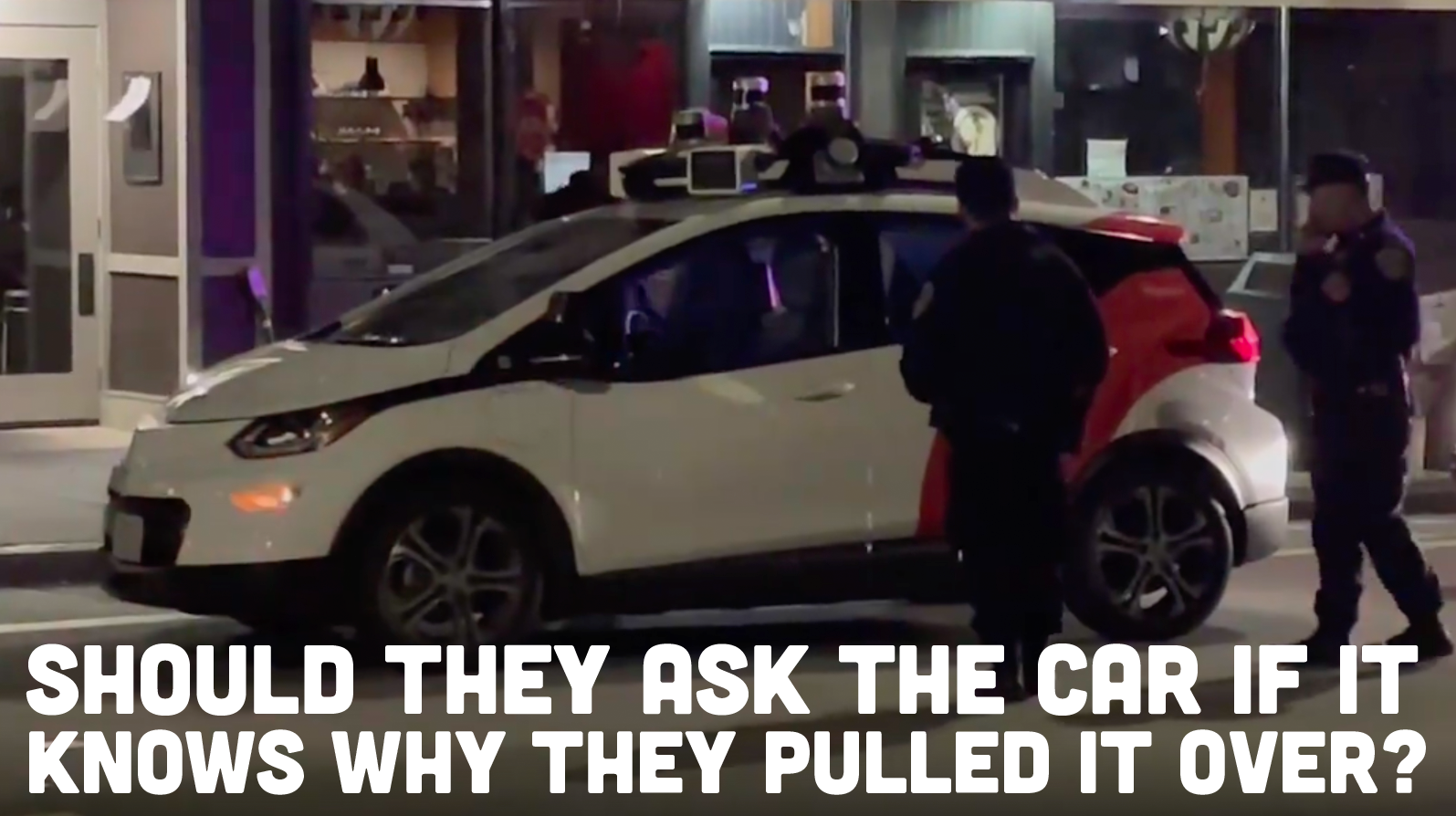 Automated vehicles (AV) are still a long way from becoming common on our roads, but the path to develop them is well underway, meaning every now and t hen we’ll be interacting with what are, essentially, 3,500-pound robots. So we probably should get used to it. Some cities have been early AV testing grounds for a while now, so you’d think that interactions with these machines would be well understood. Based on this video of cops reacting with what seems to be bafflement after seeing a Cruise car with no human driver, that’s clearly not the case. This is especially odd since this happened in San Francisco, which has been the home to multiple AV companies —  including Aurora, Cruise, Uber, and Zoox — for years now. Still, it’s fun to watch the confusion.

The incident happened on April 2 in San Francisco’s Inner Richmond district, and was filmed with obvious delight by at least one onlooker:

As you can see in the video, cops pull over a Chevy Bolt outfitted with Cruise’s roof-load of sensors, looking kind of like one of those fruit hats Carmen Miranda wore, but with the oranges and pineapples replaced with LIDAR domes and cameras. [Editor’s note: As is becoming all too common, I don’t understand this cultural reference. -DT].

The cops approach the car, looking inside with what appears to be confusion as they find no driver. The cop tries the door handle, then begins to return back to his squad car. That’s where this gets fun.

The Cruise car then takes off, as though fleeing the scene of the crime, and while it’s fun to joke about the Bolt’s tendency to, um, bolt, that’s not really what happened, since it crossed the intersection, turned on its hazard lights, and came to a stop.

The cops, who seemed surprised when the car took off, jumped in their squad car and pursued the Cruise AV the 80 or so feet to where it stopped, then got out again to mill around the vehicle and talk to each other, seemingly hoping someone had a good idea what to do here.

Notably, when the car stopped, it did so in the right lane, and didn’t attempt to park in the parking lane. 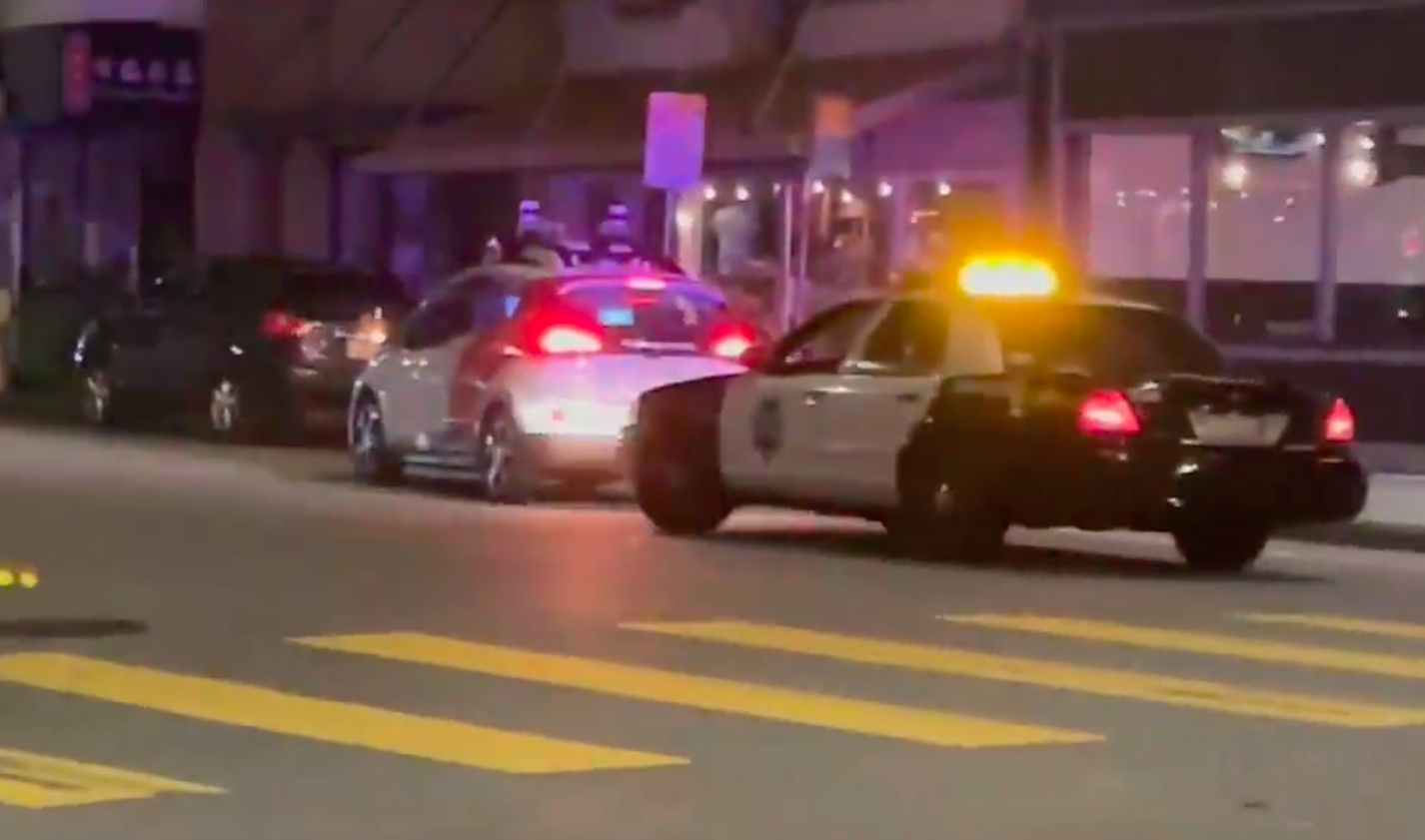 It appears that the police stopped the Cruise car because it was driving without headlights on, which feels strange; even if the car uses a combination of LIDAR (which is less dependent on ambient light) and cameras (which are), it’s not like Cruise doesn’t know to turn headlights on in the dark; cars have had sensors for that for decades, and, even without sensors, it would be trivial to have the car just turn them on between, say, the hours of 6 PM and 6 AM, or something.

I reached out both to the San Francisco Police Department and Cruise, and as of this moment, only Cruise has responded, pointing me to some tweets it posted about the incident yesterday:

We work closely with the SFPD on how to interact with our vehicles, including a dedicated phone number for them to call in situations like this.

So, the car wasn’t attempting to flee and start a new life under an assumed title and registration in Mexico; it was following directives, and pulled to what it felt was the nearest safe location for the traffic stop, which it determined was on the other side of the intersection.

Was that, in fact, the safest thing to do when cops had already stopped the car and were already out next to it? Probably not. But Cruise assures me that safety was the car’s goal.

Cruise has a whole video explaining how its vehicles deal with law enforcement, and how it expects interactions with police and first responders to work:

The automated-driving company mention that police have a direct number to call (888-662-7103) if there are any issues. You’d think maybe that might be something good to print right on the car, even if that means dealing with more calls from punk kids and fussy people who post on NextDoor every time they see someone in their neighborhood with hair they don’t like.

A few interesting takeaways from this video: All Cruise cars have specific names on their hood and rear quarters, so you can know if one is stalking you. Also, the cars are designed to identify the sounds of sirens and the visuals of flashing emergency vehicle lights. Oh, and all of a Cruise AV’s documentation, like registration and proof of insurance, can be found inside the charge port door.

In the video above, Cruise directly addresses the issue in the video — How will a first responder know the car won’t drive away when stopped, since it’s pretty impervious to intimidation or fear of huge fines and jail time? — but the answer is simply: Contact Cruise’s team directly.

Cruise AVs are Level 4 AVs–that means they’re completely automated, but they’re restricted to a specific Operational Design Domain (ODD). That’s just jargon for a restricted area, really — one that Cruise has extensively mapped and approved for their AVs to use.

The video really leans heavily on contacting Cruise directly in these situations. I suspect that’s fine in many cases, but it does bring up some issues; should police and first responders have some more direct means of disabling an AV?

Should there be some sort of kill switch that first responders (if not the general population, because, you know, those punk teens) can access to shut down the vehicle directly, from the outside, if needed?

It feels like this sort of confusion around AVs isn’t going away any time soon, and there’s still a lot of concern about some really key principles, as we discussed last week about Level 3 automation.

Even such basic ideas as how AVs should get out of tricky situations isn’t agreed upon in any universal way; some states (Arizona, Florida, Georgia, Utah, and Michigan) ask vehicles meet a “minimal risk condition,” which isn’t clearly defined but should mean the car can get out of the way, ideally away from active traffic lanes.

While 13 other states have tested AVs at some point, most have no real clear conditions or requirements for how to handle first responder situations or other failure states. Ohio and Washington require some sort of remote guidance abilities, but only California is really monitoring things in any sort of active way.

So, sure, those cops didn’t really appear to know exactly what to do with this human-free robo-car. But they shouldn’t feel too bad, as it doesn’t really seem anybody has this completely under control, either.

[Editor’s note: I’m having a hard time believing that police officers in San Francisco are somehow unacquainted with Cruise’s self-driving cars. Jason and I disagree on this; I don’t think the officers in this video looked particularly confused. They try the door handle like anyone would, then later they call someone — presumably Cruise. That’s protocol. Also, I’m disappointed that Jason didn’t at least note the old Crown Vic still in service. -DT].

I'm a co-founder of the Autopian, the site you're on RIGHT NOW! I'm here to talk to you about taillights until you cry and beg me to stop, which I absolutely will not. Sorry. Hug? Also, David's friend.
Read All My Posts »
PrevPreviousThe 2023 Nissan Pathfinder Rock Creek’s 5/8-Inch Lift Kit Will Make You The Toughest Dad At Arby’s
NextWhat Cars Would Be Like In A World Without GlassNext