Feeling a little spicy, a little argumentative? Spoiling for a bit of a fight to break that mid-week monotony? Then, buddy, are you in luck, because you’re currently reading the latest installment of the Autopian’s most combative series, Prove Me Wrong! We’ve covered BMW Bangle designs and James Garner v. Steve McQueen and Sedans v. Wagons before, and now we’re going to tackle something that I feel strongly about: power. Well, really, probably lack of power. Because I honestly believe that you can get by just fine, even in our modern world of laser hats and cellular HAM radios, with just 50 horsepower.

I know this to be true because I’ve done it, for decades, even, in a variety of cities across America. I lived in Los Angeles for almost 20 years, a city full of highways and freeways and overpasses and interchanges and hills and assholes, and my primary daily driver for that whole time was a 50 hp 1973 VW Beetle. 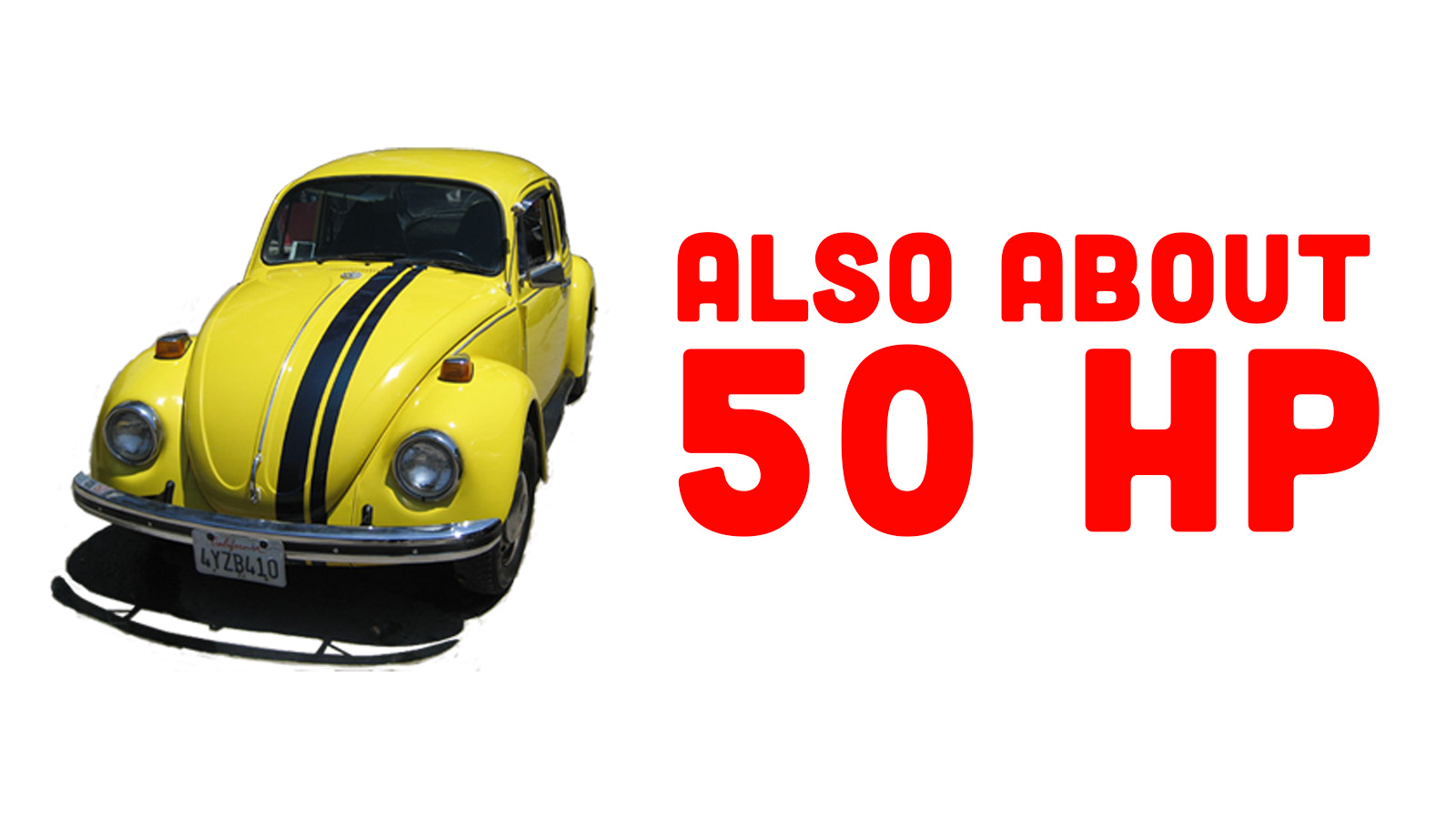 More recently my daily driver for the past few years has been my 1990 Nissan Pao, and that car’s little 987cc engine only makes 52 hp, and, again, I get by just fine.

I don’t avoid any driving situations, either: I merge onto highways with no problem, I can hold 70 to 75 mph for long highway trips, I can break speed limits in probably 75% of my normal driving situations (especially around schools), and I’ve never once been late or had to avoid going somewhere because my car has about a quarter the horsepower of the average car on the road today. 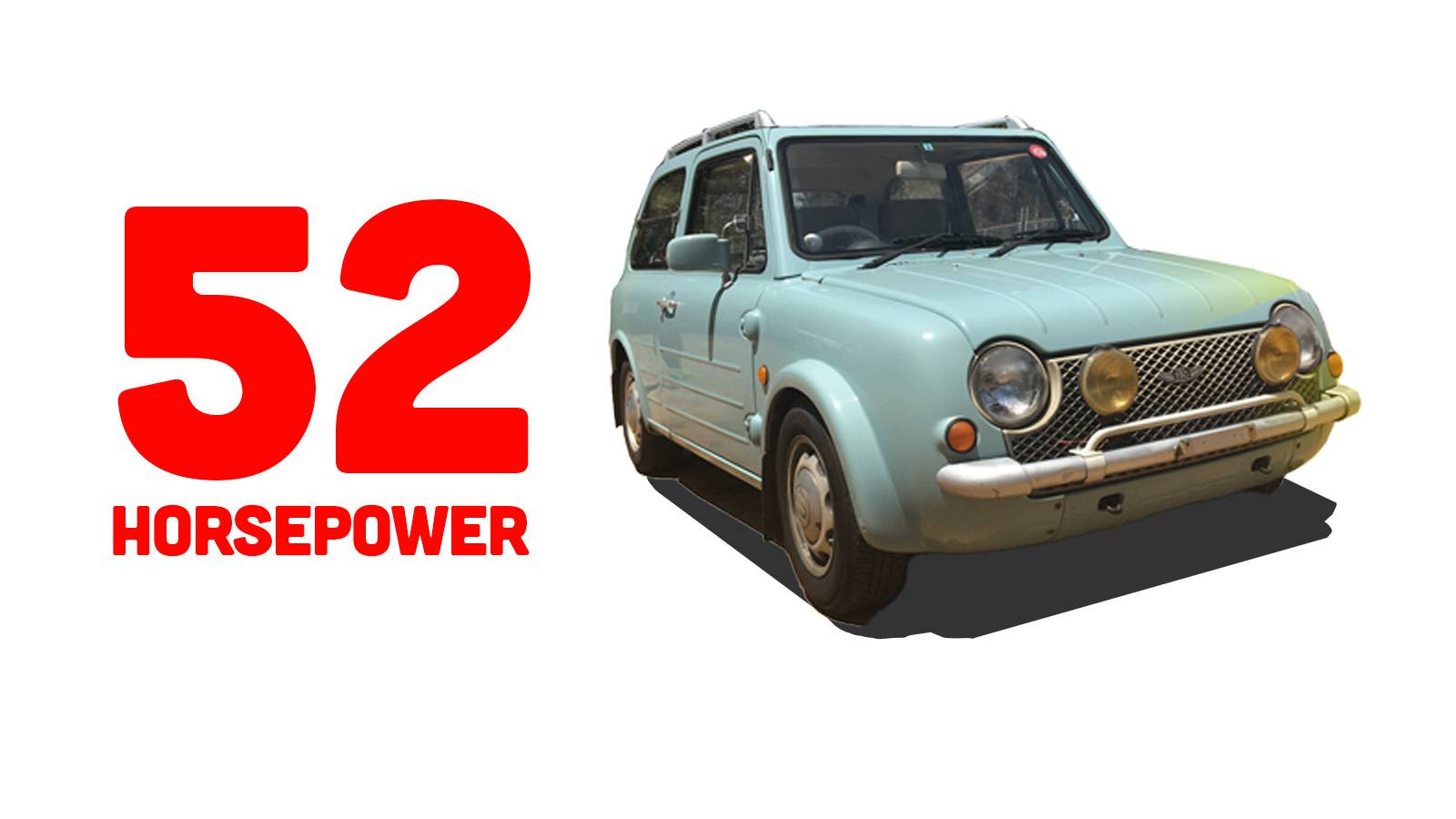 I’m not saying more horsepower isn’t fun – of course it’s fun, that’s why I have my monster Yugo GV Plus, which makes a face-melting 67 hp around! I get the appeal of speed, but I also get the appeal of feeling like your going fast, but in reality you’re just not.

But, that’s a slightly different point – right now I’m just talking about practical concerns, and less about fun. I’m just saying that I personally have driven cars with about 50 horsepower, and I have yet to have that ever be a limiting factor in what I can do or where I can go. Well, I mean, not counting, say, towing a camper full of marble statues. I mean in normal, day-to-day use.

Now, I can already hear some of you: Jay-jay, you’re screaming, stop being an idiot! Those cars you’re talking about weigh, what, 1600 pounds?

Damn, disembodied voice, you’re pretty dead on! Both the Beetle and the Pao clock in right around 1600 pounds or so, and I get that if you want, say, a more modern car with actual safety features besides floormats that will hold your expelled organs without spillage, then sure, what I drive isn’t for you.

So, with that in mind, let’s look at the power-to-weight ratio of the Pao, which is about 30 pounds per horsepower. If we say that a modern car with safety features needs to be at least 3,000 pounds, then I think we can say the equivalent yes-you-can-get-by-just-fine horsepower number is 100 hp.

Maybe that’s the metric I should use: if you have a car that makes at least one horsepower per 30 pounds, I know, empirically, that you can get by just fine in almost any normal traffic situation out there. Will you be able to pass everyone? No. Will you sometimes need to merge or change lanes by ducking behind someone instead of darting out in front? Yes.

But will you be able to merge onto a modern highway? Absolutely. Will you get where you need to go in roughly the same amount of time as anyone else in higher-horsepower cars? Damn right you will.

Again, I’m not saying that power is bad or not fun, because duh. What I am saying is that anyone who thinks they need 300 hp to comfortably merge onto a highway is deluding themselves. Get a car with more power because you want it, but I’m not buying that you need it.

Plus, look at the world outside of America; a VW Up!, a very modern car by any estimation, makes 60 horsepower and is right about 2,000 pounds, which is about 33 pounds per horsepower. But an Up! is admittedly pretty small. A Skoda Fabia is a bigger car, and you can get those with as little as 65 hp, and weighs about 2,568 pounds, which is 39 pounds per hp, and people manage to get by with that. It’s not just me!

Again, I know all this because I live that 50 hp life, and I’m a happy man who can merge onto highways, drive legally on any road in America, and get where I need to go.

I'm a co-founder of the Autopian, the site you're on RIGHT NOW! I'm here to talk to you about taillights until you cry and beg me to stop, which I absolutely will not. Sorry. Hug? Also, David's friend.
Read All My Posts »
PrevPreviousI Saw Even More Incredible Trains And Rode In A Gorgeous Stainless Steel Art Deco Streamliner
NextHey, Baby, Is This Horse Bothering You?: Cold StartNext