While BMW’s flagship 7-Series sedan has often been a conservatively-styled executive chariot with just enough technology to feel special, the new 7-Series — which debuted today — blends polarizing styling with a veritable smorgasbord of technological gadgets and gizmos to offer customers a true next-generation luxury experience and make the Mercedes-Benz S-Class look a bit old. We’re on the BMW stand of the 2001 Frankfurt Motor Show to take you on a tour of the new 2002 7-Series.

Hold on, I’m getting a message. Ah. It appears we’re not in Frankfurt, it’s not 2001 and we’re not even covering the 2002 7-Series. That’s a bit of a shame. Still, the parallels between the 2002 BMW 745i and the all-new 2023 BMW 7-Series are strong enough to hang a cable car from. Twenty years since the infamous Bangle Butt broke cover, an all-new 7-Series is here with controversial styling and enough tech to make your head spin. Let’s break it down.

Rob The Jewelry Store And Tell Them Make Me A Grille

If you want to know who’s personally responsible for the aesthetic situation at BMW, you may want to turn your attention to Domagoj Dukec, the leader of BMW’s global design team. The 45-year-old Croatian is no stranger to controversial styling, signing off on the maximalist iX electric SUV and the aggro XM high-performance concept SUV. While the iX is very much a polarizing proposition, the new 7-Series promises to be even more divisive. Up front, split-element headlamps frame a set of Weber-sized kidney grilles. Honestly, I think it’s an improvement over the outgoing car’s front end. Separating the daytime running lights from the main headlamps gives the new 7-Series a sharp, angular appearance. It also seems to pay homage to the 2002 745i’s eyebrow-like indicators at the tops of its headlights.

Moving to the rear of the new BMW 7-Series, the Bangle butt is back! Well, sort-of. The trunk lid itself doesn’t wrap around to the body sides, but the tall and blocky rear deck pays homage to Chris Bangle’s flamboyant flagship. Honestly, it works quite well to balance out the long, flat hood.

Really, the big step backwards out back is the tail light design. The outgoing model’s full-width tail lamp was so good that it’s mildly disappointing to see two separate units here. Still, they’re quite slim and feature beautiful mesh detailing. As for the side profile of the new 7-Series, there’s not much to report there other than the deletion of the hockey stick trim along the rocker panels and the addition of some flush-mount door handles. Overall, I think it’s a job well done. Some people will hate it, some will adore it, and that’s the mark of interesting design.

Remember how I said that the new 7-Series has enough tech to make your head spin? Even the way you enter the car is pretty advanced. Just touch an exterior door handle, and the door will whimsically whirr open — great for anyone whose favorite childhood movie was Matilda.

Plant your butt in the driver’s seat and you’ll quickly find that someone’s stretched a mood ring across the entire dashboard. Called the BMW Interaction Bar, it’s not a speed-dating function but rather an illuminated crystal panel with touch-sensitive controls for the climate controls, hazard warning lights, and glovebox release. I know, a touch-sensitive hazard light switch is the most brainless thing since 90 Day Fiancé, but the backlit crystal does look lovely.

It’s a six-figure sedan for very serious new money businesspeople; flexing will always come first. Speaking of flexes, on-board 5G connectivity is pretty neat. It should allow for cloud connectivity in true BMW manner – surprisingly quick yet likely unreliable. On the bright side, an embedded 5G modem makes for robust futureproofing. As the first non-trial 5G networks only came online in 2019, the new 7-Series should effectively be connected for life.

As for the 7-Series’ infotainment system, it’s largely the same as you get on the iX electric SUV — two big curved screens under a single panel of glass, one for the gauges and one for media and climate. More important is the material selection on offer, because some upholstery options sound absolutely fabulous. The big news is the availability of cashmere wool seats — a surefire hit for frigid northern winters.

On the opposite end of the price scale is the standard Veganza faux-leather upholstery. It may sound like the name of a Daewoo, but it should be plenty durable if BMW’s old Sensatec leatherette is anything to go by. The top-spec audio system on offer is a 36-speaker Bowers & Wilkins system with 1,965 watts of power. What truly makes this audio system unique is the presence of backrest ‘exciters’ (giggity) for a “4D” experience. I have no idea what effect this has on sound quality, but I bet it gets the people going.

For minor toys, heated armrests make an appearance, as does an available Sky Lounge illuminated panoramic sunroof. Nothing new there, but they are lovely features to have.

If you think the front seat of the new BMW 7-Series is good, wait until you see the back seat. Amid the usual announcements of an enhanced reclining feature and updated ambient lighting, BMW’s grabbed the dial for connectivity and completely cranked the knob off. Say hello to the BMW Theater Screen, a 31-inch, 8K ultra-hi-def, Amazon Fire TV-enabled touchscreen that motors out from the headliner. Rear seat passengers can fold it down through door-mounted touchscreens (yes, really) and enjoy their favorite visual programs in 16:9, 21:9 or 32:9 aspect ratios. The really cool part? When you deploy the BMW Theater Screen, the rear sunshades close and a special audio clip composed by Hans Zimmer is played on the audio system. Theater, indeed.

But wait, back to those touchscreens on the door cards. They may look like Windows Phones and have the obnoxious marketing-speak name of BMW Touch Command, but they do seem quite useful. I know that packing three passengers across the rear seat of an executive sedan happens with the frequency of Pluto completing a solar orbit, but it’d be nice to remotely control the audio and climate settings should you find yourself in a fully-occupied 7-Series.

If you’re thinking that such a theater system must require a silent car, BMW’s solved that by taking away the engine. You’ll still be able to get gasoline-powered models, but 2023 brings the first fully-electric 7-Series: the i7. In its xDrive60 launch trim, it’ll come with a 313 horsepower (230 kW) brushed electric motor at the back and a 258 horsepower (190 kW) electric motor at the front for a combined total of 544 peak horsepower. That’s pretty solid considering the electric motors don’t use any rare earth materials. The i7 xDrive60’s zero to 62 mph dash is quoted at a reasonably rapid 4.7 seconds, although BMW’s reputation for sandbagging likely means that the i7 xDrive60 will be a touch quicker than that. Does anyone know how big a Bavarian horse is? While a Lucid Air or Tesla Model S Plaid would rip the i7’s doors off, neither of those cars is carrying an entire movie theater with it.

As for the i7 xDrive60’s battery pack itself, it features 101.7 kWh of usable energy and is estimated to have 300 miles of range on the EPA cycle. Not terrible stuff for a flexible-platform car, but certainly not in the same league as dedicated ground-up long-range EVs. Also a bit behind the times is the i7’s 195 kW peak charging speed.

The Hyundai Ioniq 5 can charge at a blistering 350 kW and also has a lounge seat, although I suspect i7 customers won’t cross-shop with Hyundai. Speaking of charging, BMW’s giving i7 customers three years of free 30-minute charging sessions on the Electrify America network, which is the customer service equivalent of taking Queen Elizabeth II to Arby’s and not letting her order meat mountain. 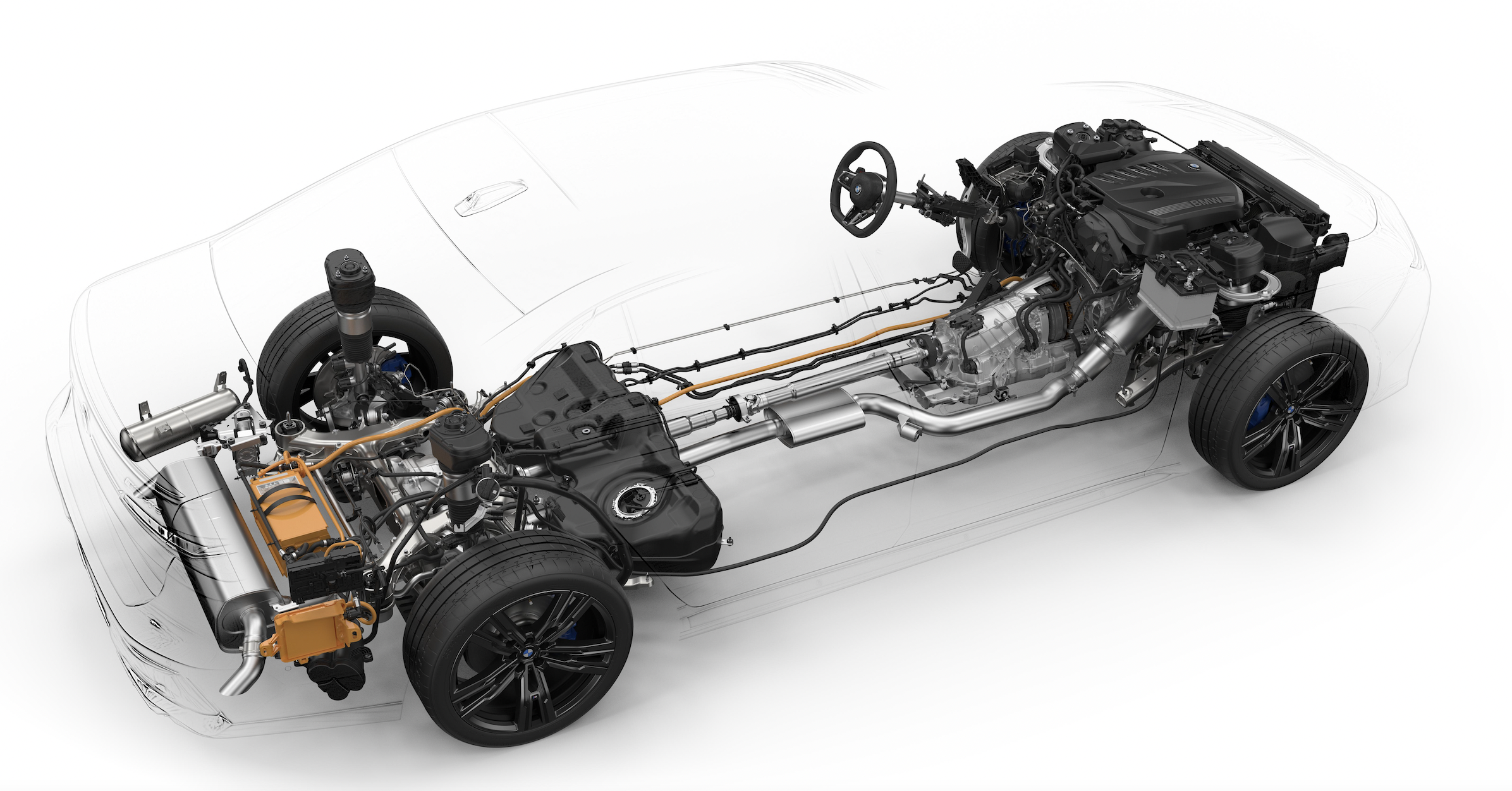 Both of these dino-burners are equipped with 48-volt mild hybrid systems that will likely have no noticeable effects other than remarkably smooth automatic stop-start system operation. A bit like sending thoughts and prayers to polar bears. There will also be a 750e xDrive plug-in hybrid, a sporty M760e xDrive plug-in hybrid and a rapid i7 M70 xDrive on offer some time in 2023, but BMW’s only giving Americans a choice of three propulsion choices for now.

I Can Ride My Bike With No Handlebars

As for safety tech, the new 7-Series will come with a typical suite of driving assist features. Automatic emergency braking, adaptive cruise control, blind-spot monitoring — that sort of stuff. However, it does go a bit beyond typical if you tick the right option boxes, and BMW’s teasing something huge for the future. Let’s start with the bane of every city-dwelling big car owner – parking. Starting next spring, owners of new 7-Series models who ticked the box for Parking Assistant Professional will be able to use ghostride the whip mode. Okay, it isn’t actually called that, but it lets owners park their Bavarian yacht through a smartphone app. Honestly, it seems like a great idea. It’s not like it’ll be used for pranks, right?

Moving on, American BMW 7-Series owners will be able to hit a button on the steering wheel that activates adaptive cruise control and lane-keep assist to drive hands-free on controlled-access freeways. Yes, this includes making lane changes “in succession,” as BMW puts it. Hopefully the computers won’t weave through traffic like many owners do.

In terms of stuff to come, BMW’s planning to add Level 3 autonomy to the new 7-Series at some point in the vehicle’s lifespan. To really get steam coming out of Jason Torchinsky’s ears, BMW even teased being able to look at your phone while Level 3 autonomy is active. I’ll be honest, that seems like a really awful idea. Imagine getting brake-checked in an attack of the 50-foot kidney grilles because someone was too busy playing Wordle to notice a hand-off alert. Not fun, right?

To sum it all up, the 2023 BMW 7-Series looks like a masterpiece. It’s a striking maximalist executive limo with enough technology to blow the Mercedes S-Class into the middle of last week. The styling may not be for everyone, but as a fan of the Bangle-era 2002 7-Series, I absolutely adore the look of the new one. The interior of the new 7-Series is likely to be a huge success, melding insane gadgets with mesmerizing design in a way that’s sure to make its occupants feel like a zillion bucks. Who knows, maybe in 15 years they’ll have depreciated to the point where I could buy one. Forget the Benz, skip the Bentley, I’m taking the Bimmer.

Anyway, the i7 xDrive60 (god, what a mouthful) will start from $120,295, the base-spec 740i rings up at $94,295, and the mid-range 760i xDrive starts at $114,595. Expect pricing to rise rapidly as options pile on, although it still seems like a bit of a bargain compared to a Mercedes-Benz S-Class. Whether you think the new BMW 7-Series is awesome or disgusting, you have five-to-eight months to prepare your cameras and/or barf bags. Pre-orders for the i7 are open now, with the rest of the line launching in the fourth quarter of 2022.

Thomas is a Nu Rave-blaring, heel-toe downshifting, maple syrup-swilling, chassis-geeking, junkyard parts-hauling, floppy-haired scenester who's been writing about cars since college. His current ride is a 2006 BMW 325i with the six-speed manual gearbox. Instagram: @thomas.hundal Twitter: @thomashundal
Read All My Posts »
PrevPreviousWhy This Natural Gas-Powered Bus Shooting Gigantic Columns Of Flame Is An Example Of Safety Tech At Work
NextCold Start: What’s Going On Here With These Thunderbirds?Next