It was only a matter of time. Someone was going to absolutely nail the current fascination for all things eighties and cyberpunk on a concept car that spoke to enthusiasts in a way we haven’t seen for quite a while. Except who would have thought it would be Hyundai? In hindsight, it shouldn’t come as a galloping shock to any of us. The N Vision 74 has hit automotive fandom right square in the in the squishy feels. Influencers and internet design experts alike are losing their collective minds, so allow me to cast my designers eye over what’s going on. 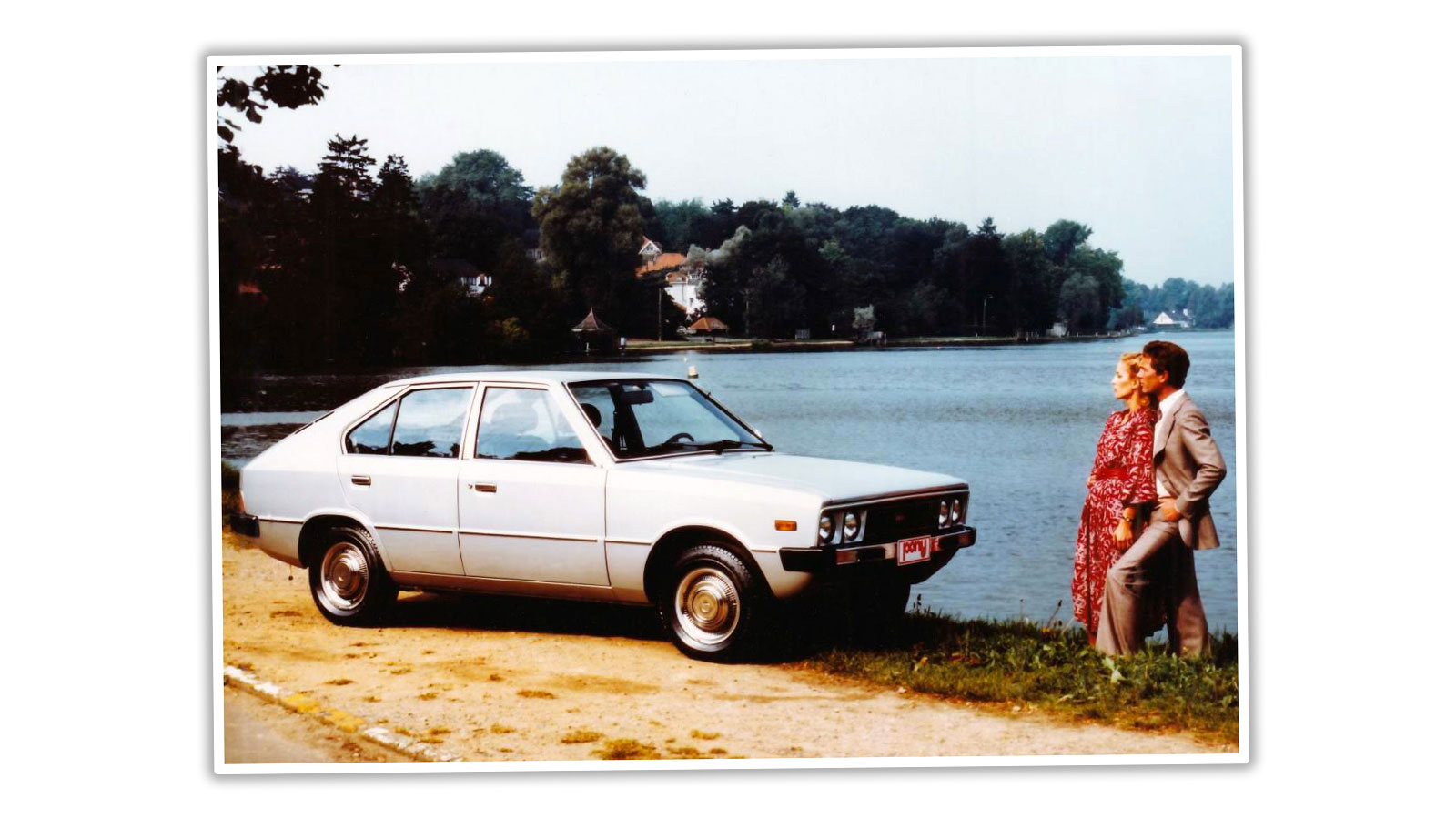 The first car Hyundai designed and engineered themselves was the 1975 Pony (shown above), designed by Giugiaro. His initial designs, like the Alfa Romeo Guilia Sprint GT were classically curved with delicate proportions and detailing, but by the early 1970s he was exploring more angular wedge shaped forms with straight lines and sharp transitions between flatter surfaces. The BMW M1 and original Lotus Esprit are prime examples of this look:

It wasn’t an aesthetic that was limited to sports cars. He successfully used these ideas on the MK1 Golf, giving it an air of solidity with just enough flair to counteract its ruthless German efficiency. Although the Pony wasn’t the last word in sex appeal, it looked solid, sensible and modern compared to European family cars which at the time were still heavily influenced by America.

Young mainstream brands like Hyundai don’t have a long line of classic and fondly remembered vehicles to draw on when it comes to influencing their current designs, so they have to start from scratch. Mass market brands tend to follow each other, so we end up with a load of cars that are similarly styled, or they go for sheer untethered lunacy to stand out with individual models (hello Nissan Juke, Fiat Multipla). That’s why the current range of Hyundais have angry faces with squinty light graphics and body sides with so many nonsensical creases they look like they’ve been head butted by a charging rhino. They’re all very overdone, because that’s where the vogue is currently.

Which is what makes their recent run of concept cars somewhat refreshing. The 2020 Prophecy Concept (shown above), a slinky black four-door with minimal detailing and slightly too much droop in the tail previewed the recently released Ioniq 6, Hyundai’s second dedicated EV sedan. Then came the video game gangster chic of the 2021 Heritage Series Grandeur Concept (shown above), all cigar drawers and red velvet, based on the 1986 Grandeur. After that, Hyundai paid tribute to the original 1975 Pony by raiding the drawer labelled obsolete electronics and giving the 2021 Pony Concept nixie-tube-style instrumentation. Somewhere in this deluge there was an electric SUV, the 2021 Seven Concept.

And of course, we can’t forget that the Ioniq 5 made it production as well:

And we’ve not even got to the N Vision 74 yet. This all represents a staggering amount of design work and expense in a short space of time. Remember concepts cost millions of dollars and take at least a year or more to go from sketch to showable model. Here is a company finding its design confidence, and — awash with cash — looking to show that EVs needn’t be boring appliance like cars. Eye catching design is important for sales, but you need to be careful. One of the reasons efficiency mobiles like the Honda Insight, Clarity and the BMW i3 & i8 failed to catch on with the mainstream is they were probably styled a step too far, looking like space cars of the future which alienated people. Say what you will about Tesla, but they were smart in making their cars blandly handsome so as not to offend.

Hyundai are slightly hedging their bets then, here. Both the Pony and Grandeur Concepts prove that good proportions – the car’s silhouette – are universal. It’s the graphical features, wheels, lighting and interiors that drag them into the world of the future. The Ioniq 6 sedan and the Seven Concept SUV shown above have new ideas for proportions, and clean, modern surfacing, but what all these cars have in common is their leaning into a retro-tech-future-past vibe that pushes a lot of nostalgia buttons. This helps ease people past the fact these are bleeding edge electric vehicles.

My Notes On The N Vision 74 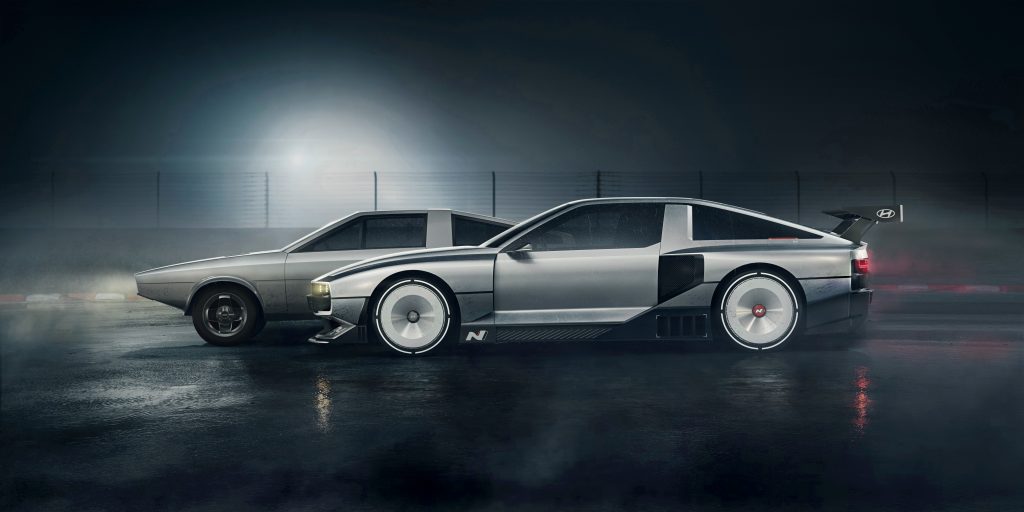 With the N Vision 74 (not very catchy), Hyundai have seemingly gone for internet death or glory. Let’s check off the eighties touchpoints shall we? Turbofan wheels. Pixelated lighting. Box arches. Rear window louvres. Lots of labels and graphics. Classic Japanese rear-wheel drive proportions (Nissan S13, AE86, A60/A70 Supra). Let’s chuck a hint of Delorean in there as well, just to make sure the message hits home. Hyundai even mentioned this themselves, which feels a bit shameless [Editor’s Note: That 1974 Hyundai Pony is said to have inspired the DeLorean DMC-12 and this new Hyundai concept, so I feel like it’s not TOO shameless. -DT]. Although the original Pony Coupe show car is from 1974, Hyundai have ignored the brown and headed straight for the neon. This car is laser focused on hitting enthusiasts right in the Radwood-shaped pleasure center. The fact that it’s powered by electricity and a hydrogen fuel cell is getting a bit lost in all the hype around its appearance.

Now, you might think this sounds a bit cynical of me, and maybe on some level it is. At the risk of sounding like an old man yelling at a cloud, let me explain. I was born in 1973, so although I was a bit young to experience cocaine and unregulated share-dealing, and wasn’t cool enough to pull off neon leisure wear, I clearly remember the looming Armageddon that permeated every aspect of our daily lives. Something that has seemingly been forgotten. Recently in the UK ,Renault had a TV ad for the Zoe EV that was soundtracked by a cover of Alphaville’s “Forever Young,” a 1984 synth pop classic about nuclear war. They couldn’t have missed the point more if they’d used ‘Two Tribes” by Frankie Goes to Hollywood.

Now to be fair, none of this is Hyundai’s fault. As a society we’ve been reveling in post-modernism since the early nineties (although as an artistic movement its roots lay in the late sixties). Concept cars used to only be seen at major motor shows, and then in the pages of magazines. As methods of delivering an idea or a message, both these mediums are essentially dead. With the advent of the instant information and criticism age, you live or die by the online discourse. You need a more efficient way of cutting through the noise and standing out. 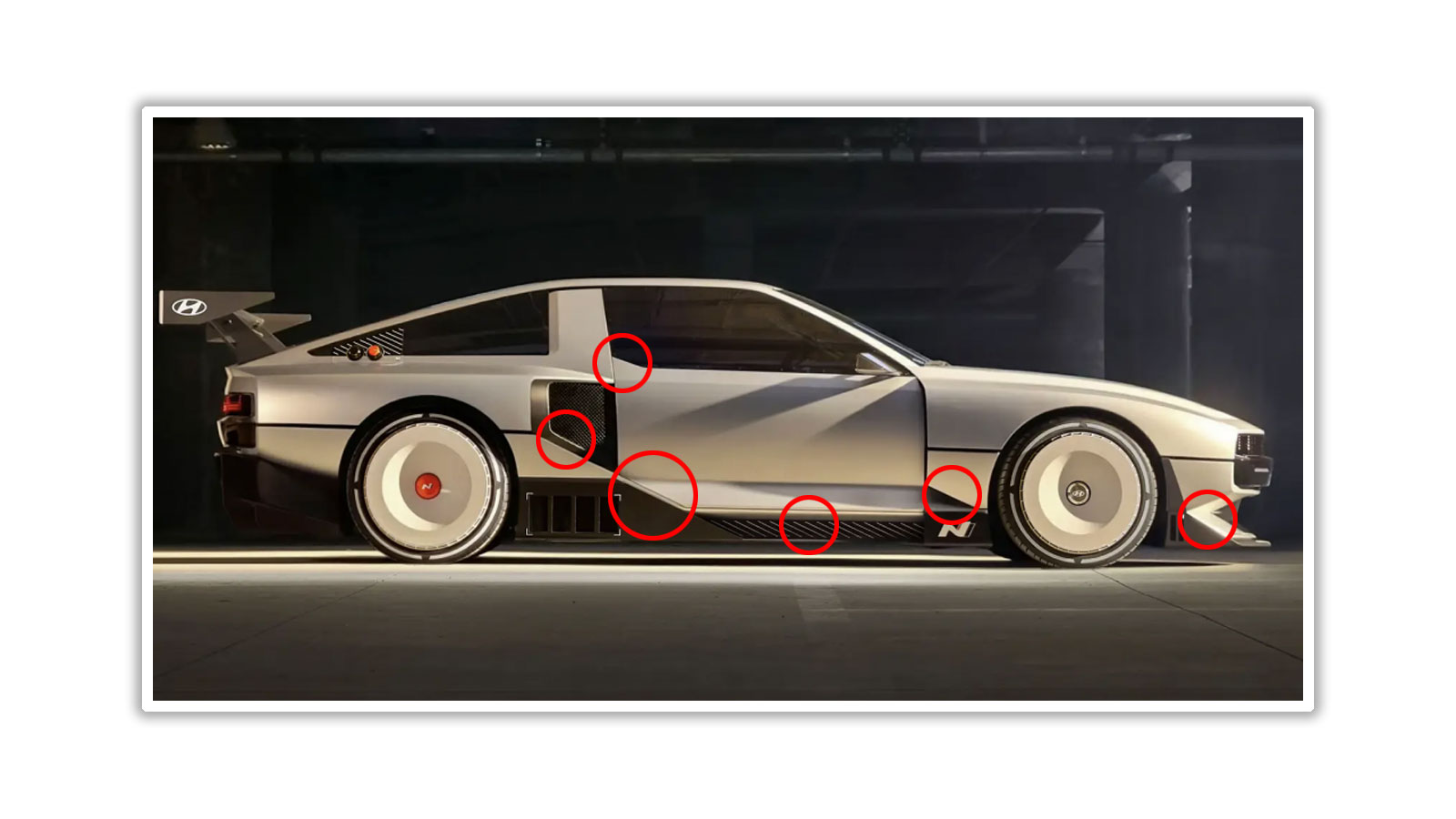 But for all that high-minded designer wanker opinion, there is no doubt the N Vision is very well executed indeed. It’s long at 195”, and wide at 78″, but cleverly chief designer Sangyup Lee (who has form for this sort of retro redo, making his name with the 2009 Camaro Concept) has resisted the temptation to exaggerate the car, keeping it reasonably plausible with a height of 53”. It looks like a well done restomod of something that never existed. Every line, angle and shape fits in neatly to the overall theme. Notice how the angled line of the corner of the door window is replicated in the bottom line of the side air intake, the strakes on the lower bodyside molding and the front spoiler. This sort of attention to detail is insanely hard to get right. 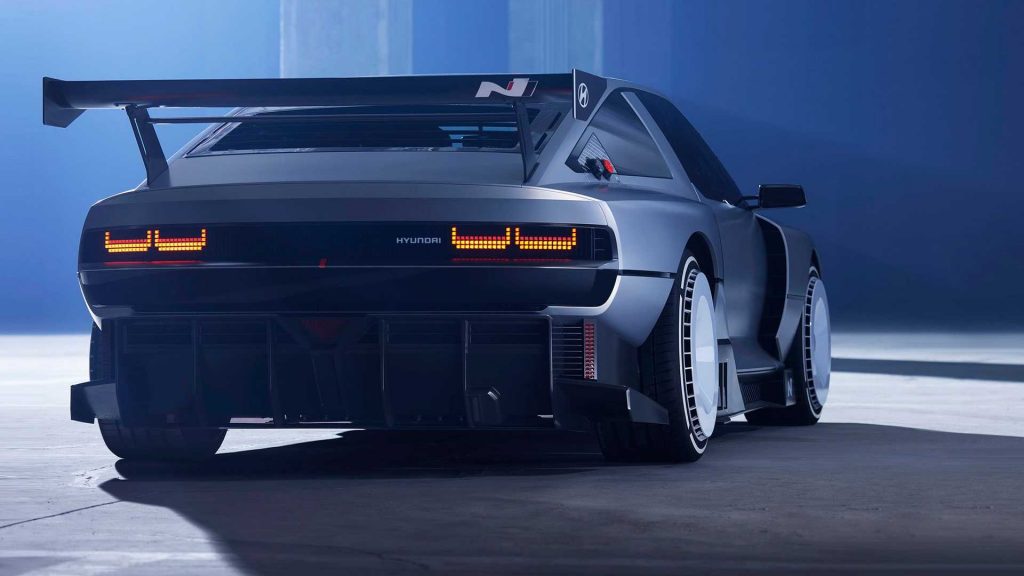 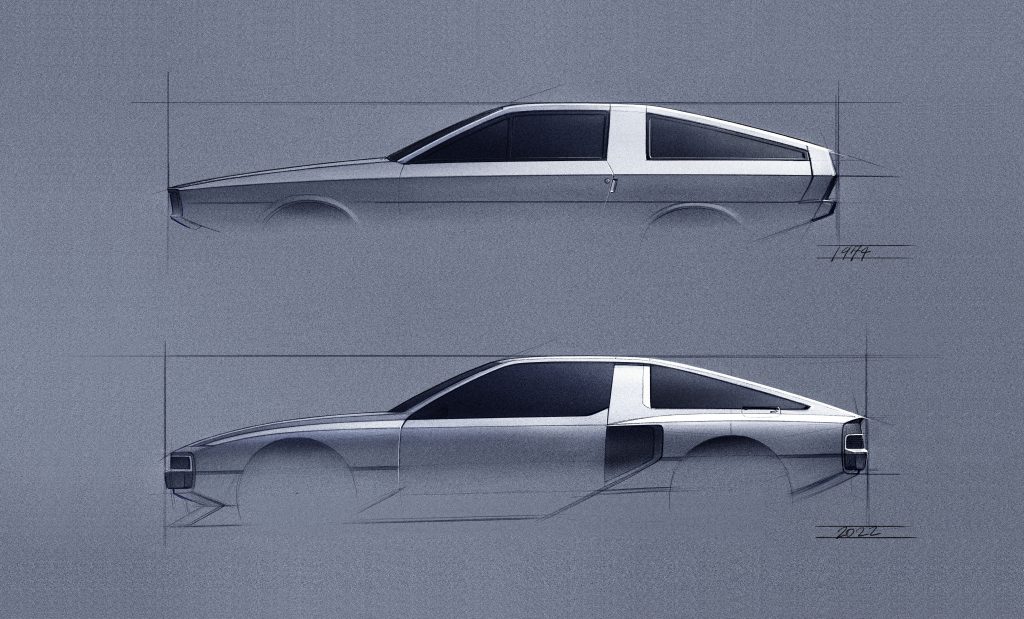 There’s a nice curved profile to the bodyside which helps minimize it from looking too boxy and bulky, and clever use of dark trim breaks up the sheet metal and adds visual interest that is logical and makes aesthetic sense, without it looking fussy and over-designed. Like all the best designs, at first glance in seems simple, but is incredibly well resolved and actually quite complex.

Taking a long look at this car though you could imagine stripping away all the tuner parts and flared bodywork and it would still work as a solidly handsome large-ish GT. Which, if it ever heads to production is probably where it will land. The quick ballpoint sketches appear to be dated 2016, which if true suggests Hyundai have been thinking about doing something like this for a long while.

Which is fitting, because Hyundai and Kia realized some time ago you can’t sell forever on value and 10 year warranties. Customers have to desire your cars on an emotional level as well. Hopefully some of the restraint of their concepts will begin to find its way into the vehicles you can actually buy.

Professional Car Designer and writer about car design. I have a BA in Automotive Design and a Masters in Vehicle Design from the Royal College of Art in London, where J Mays was my tutor. He used to bring in donuts. I was hired from there into a major European OEM. I daily drive a 2011 L320 Range Rover Sport and also own a 1983 Ferrari Mondial QV. I always wear black, love goth music and have way too many books. twitter: @adrianfclarke. Instagram: adrianfclarke
Read All My Posts »
PrevPreviousMeet The Italian-Styled Show Car That Inspired The New Hyundai N Vision 74
NextThe 700 Horsepower V8 2023 Ford F-150 Raptor R Screams Like A Mustang GT-500 Off-RoadNext