At this moment, everyone is losing their lettuce about Hyundai’s new battery and hydrogen fuel cell EV, the Hyundai N Vision 74. You yourself may be experiencing feelings of complicated arousal, and I think that’s healthy. But you may be slightly confused as well: Why the “74?” Where does this oddly retro design language and wedgy shape come from? Is there some history here I should be made more aware of? The answer is yes, and that’s why I’m here, so relax. I got this. Meet Goigetto Giugiaro’s under-appreciated 1974 masterpiece of straight-edge ’70s design, The Hyundai Pony Coupé.

Before we can get into the Hyundai Pony Coupé show car, we need to take a quick look at the far less exciting production car that followed it, the Hyundai Pony. The Pony was South Korea’s first real mass-produced car, the first car they exported, and, really, the car upon which all of the massive Korean auto industry owes its existence to.

Built between 1975 and 1990, the Pony was a pretty unremarkable car technically, even for the time. During a period where many carmakers were looking to transverse engines and front-wheel drive for their mass-market family cars, like the Volkswagen Golf or (with a longitudinal engine) the Renault 5, Hyundai went with a more traditional front engine/rear drive layout for the Pony. 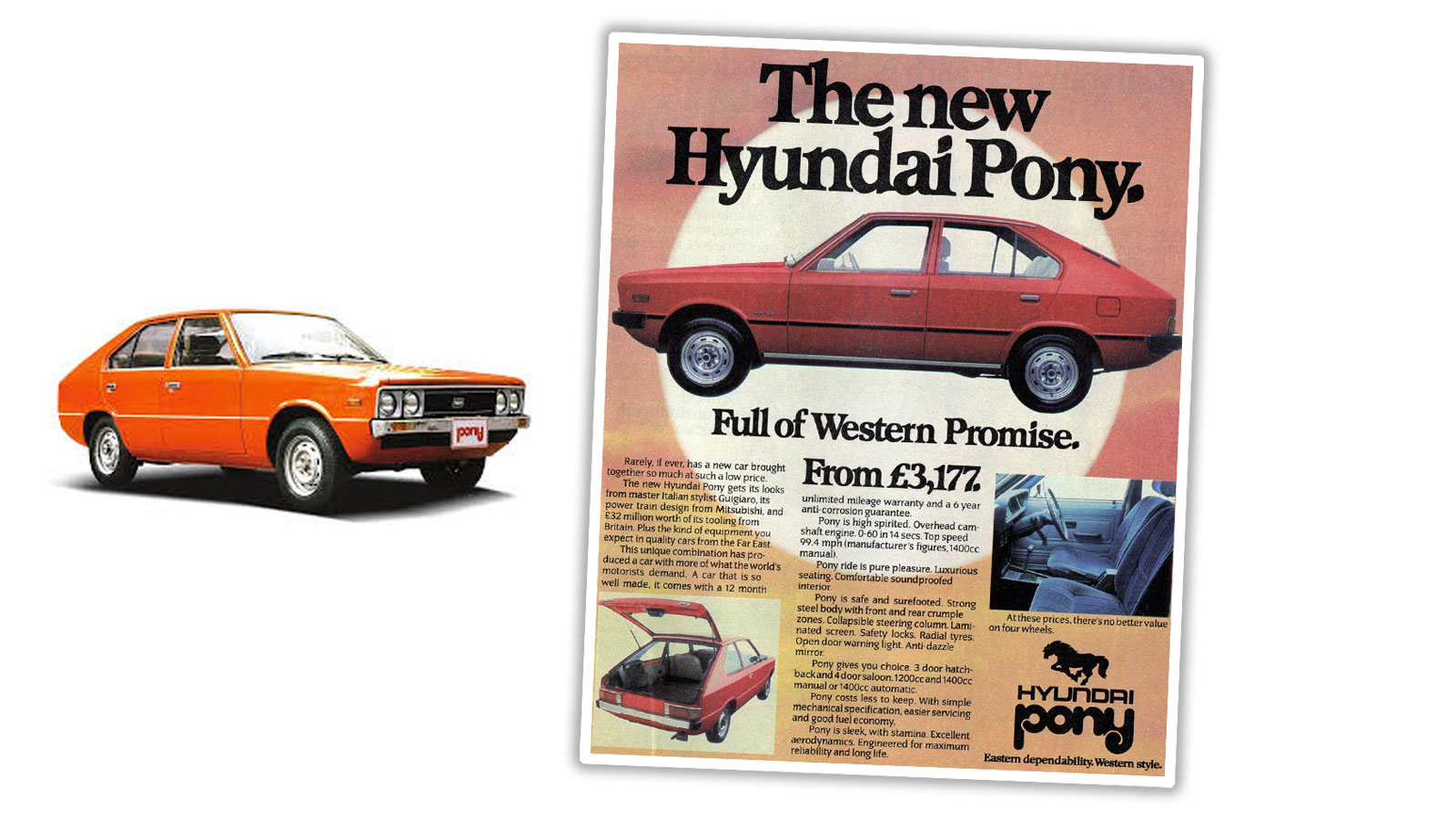 Perhaps it was because Hyundai had experience building British Ford Cortinas under license, Hyundai hired almost exclusively British car engineers to help engineer and design the car, engineers that had experience designing cars for Austin Morris and British Leyland, including the Morris Marina.

Now, to our car-besotted, cynical brains, hiring the minds behind the Marina likely doesn’t seem like the absolute best plan, but it worked out fine, with Mitsubishi drivetrains and a simple but handsome body styled by Italdesign, the company founded in part by legendary designer Giorgetto Giugiaro.

Here’s a great little interview with Giugiaro about the restrictions and challenges of designing the Pony:

Giugiaro already had some good experience designing this sort of modern-looking practical car, having designed the Golf for Volkswagen. The Pony worked within the same basic design vocabulary of straight lines, dramatic angles, crisp creases, and minimal adornment.

The result didn’t feel like last-generation thinking, thanks largely to Giugiaro’s design. To introduce this design before the launch of the car in 1975, Hyundai decided to have Giugiaro do something a bit more exciting: make a concept car version of the Pony, but something sportier and more dramatic, taking the design inspirations of the production car to their more extreme forms, and show off this version of the Pony at the 1974 Turin Auto Show.

This car was the Hyundai Pony Coupé.

The Pony Coupé kept the same general shape and form of the production Pony, but exaggerated the proportions to make something longer and lower and wider and hungrier and sleeker. The blunt front end with its simple grille and quad round headlamps was allowed to be recessed into a tapered end, changing the feeling of the face dramatically.

Without the large bumpers, the underside could recede rapidly, emphasizing the arrow-like point of the car, a sharpness that continued in all of the crisp lines and details throughout, and was echoed at the rear, which had a similar lean, undercut profile. 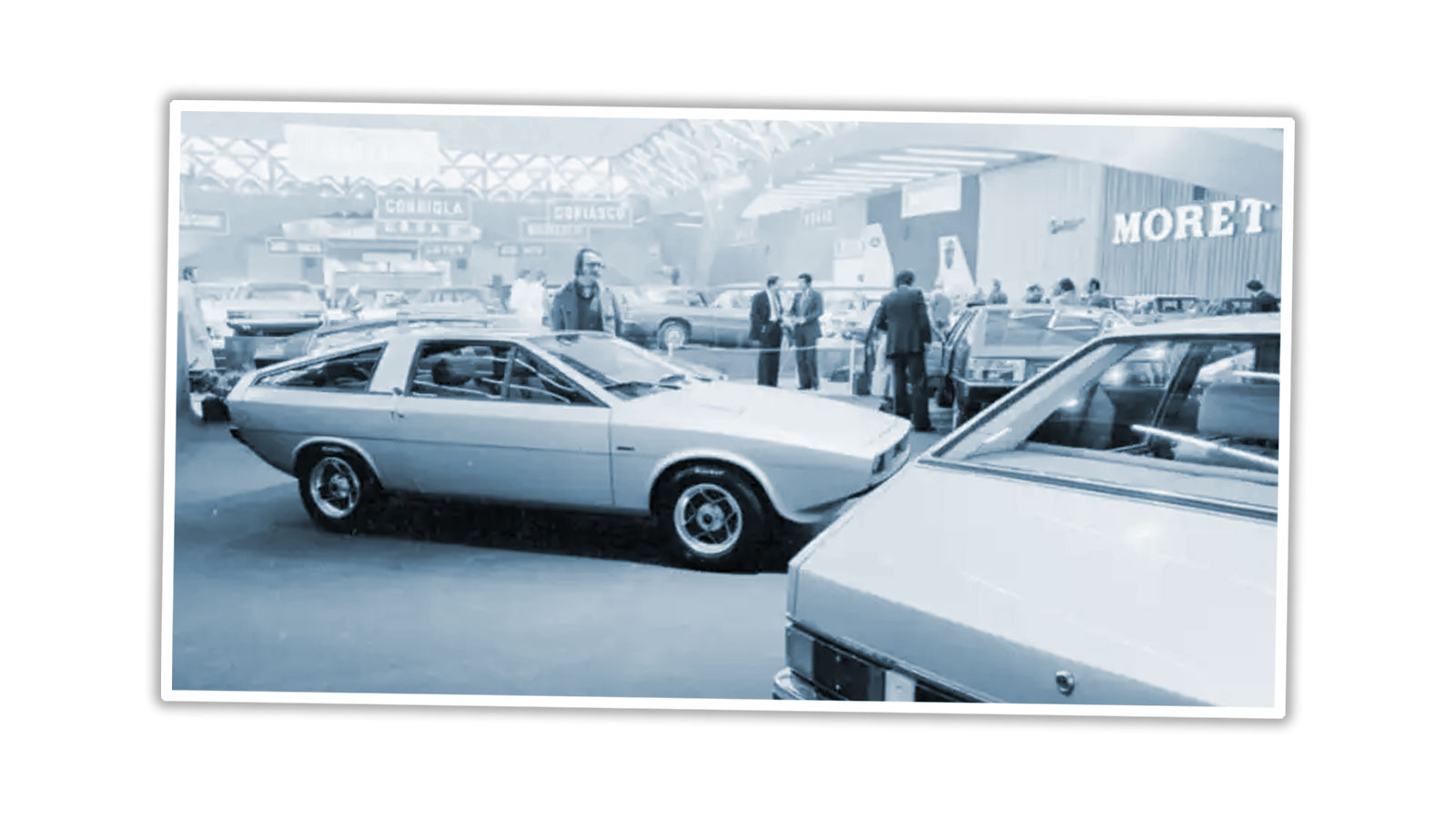 The Pony Coupé’s lines were compared to origami, full of flat planes and crisp folds, sharp corners and a certain purity. It was a great-looking car, somehow feeling both fast and practical, and the car was said to have influenced the DeLorean DMC-12, and echoes of these design ideas were used by Giugiaro in cars like the VW Scirocco and Lancia Delta. 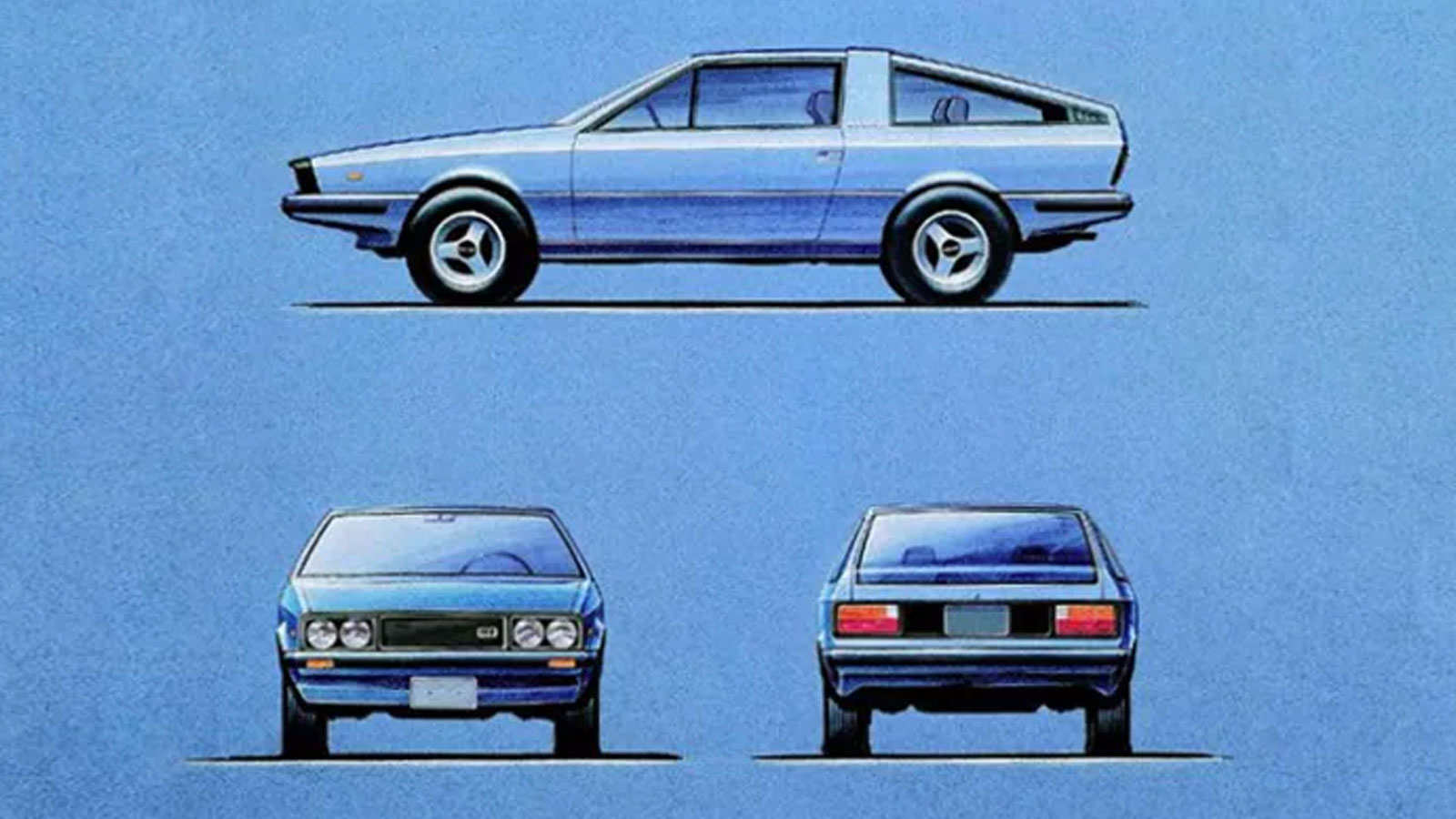 If we look at the new Hyundai N Vision 74 concept car in the context of this 1974 show car, the inspiration is pretty obvious: 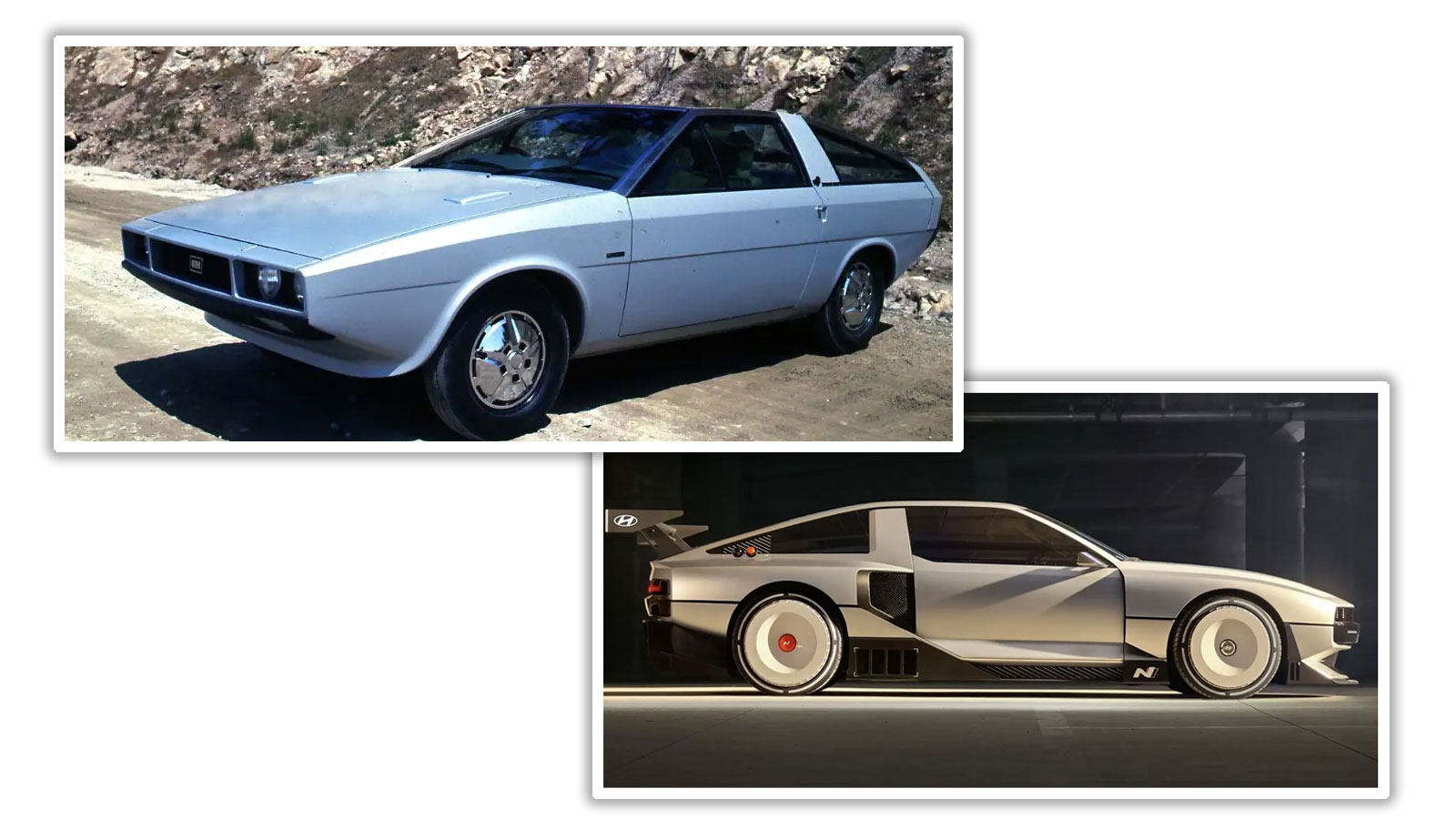 Hyundai has re-cast the silhouette and basic design vocabulary of lines and creases but updated it significantly. The roofline comes through almost untouched, but the front and rear lighting is recast in a modern-yet-retro dot-matrix LED style, though the quad-lamp graphic still remains. 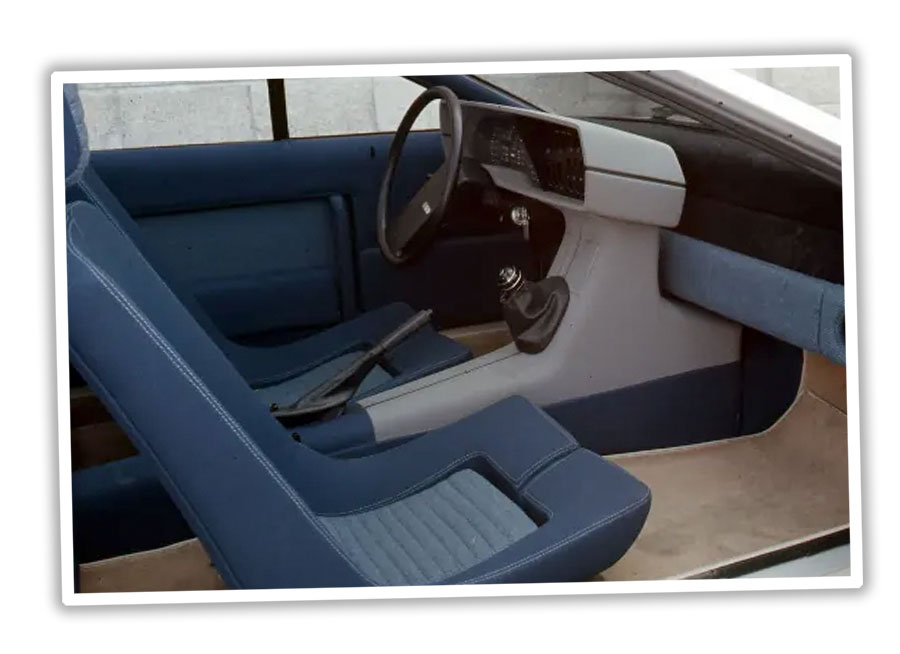 The basic elements are all there, down to the long and narrow indicator lamps inset into that black bumper bar. Only on the modern version everything is widened, exaggerated, enhanced, the grille unified into the lamps, the fenders getting bulges and arches, the front lip and airdam growing – essentially, the same type of techniques used to re-cast the original production Hyundai Pony design into the 1974 concept car, just done again, almost 50 years later.

The Pony Coupé is a design icon that doesn’t often get the attention it deserves. I’m delighted that Hyundai was wise enough to dig into their own history and give it such an enthusiastic and exciting tribute.

I'm a co-founder of the Autopian, the site you're on RIGHT NOW! I'm here to talk to you about taillights until you cry and beg me to stop, which I absolutely will not. Sorry. Hug? Also, David's friend.
Read All My Posts »
PrevPreviousThe Story Of The Chrysler Concept Car That Sank To The Bottom Of The Sea
NextA Car Designer’s Opinion On The Hyundai N Vision 74 That’s Currently Breaking The InternetNext