Myth: A Famous (or Infamous) Chrysler Concept car sunk to the bottom of the ocean aboard the Andrea Doria cruiseliner.

Today most people refer to them as “concept cars.” By “them” we mean those one-off dream machines, mockups, design studies and turntable toys intended to dazzle us at auto shows, give potential customers and the media a hint at specific vehicles or automotive design language that’s coming in the near future, and possibly even gauge reaction to the same.

Virgil M. Exner, Sr., used a different name – he called them Idea Cars, because to this visionary designer and design department leader, the power of good ideas was everything. He began his career as an advertising illustrator. As a young design phenom and protégé of GM design boss Harley Earl, Exner ran the Pontiac styling department, before leaving to join Raymond Loewy and Associates in 1938, there working primarily on Studebaker projects. Exner was dismissed by Loewy in 1944, only to join Studebaker directly, even though Loewy gets much of the credit for Studebaker’s fresh post-war designs, much of that effort should be more equally attributed to Exner. Exner left Studebaker in 1949 to join Chrysler’s design studio, ultimately to become Chrysler’s styling chief, and a member of the board. 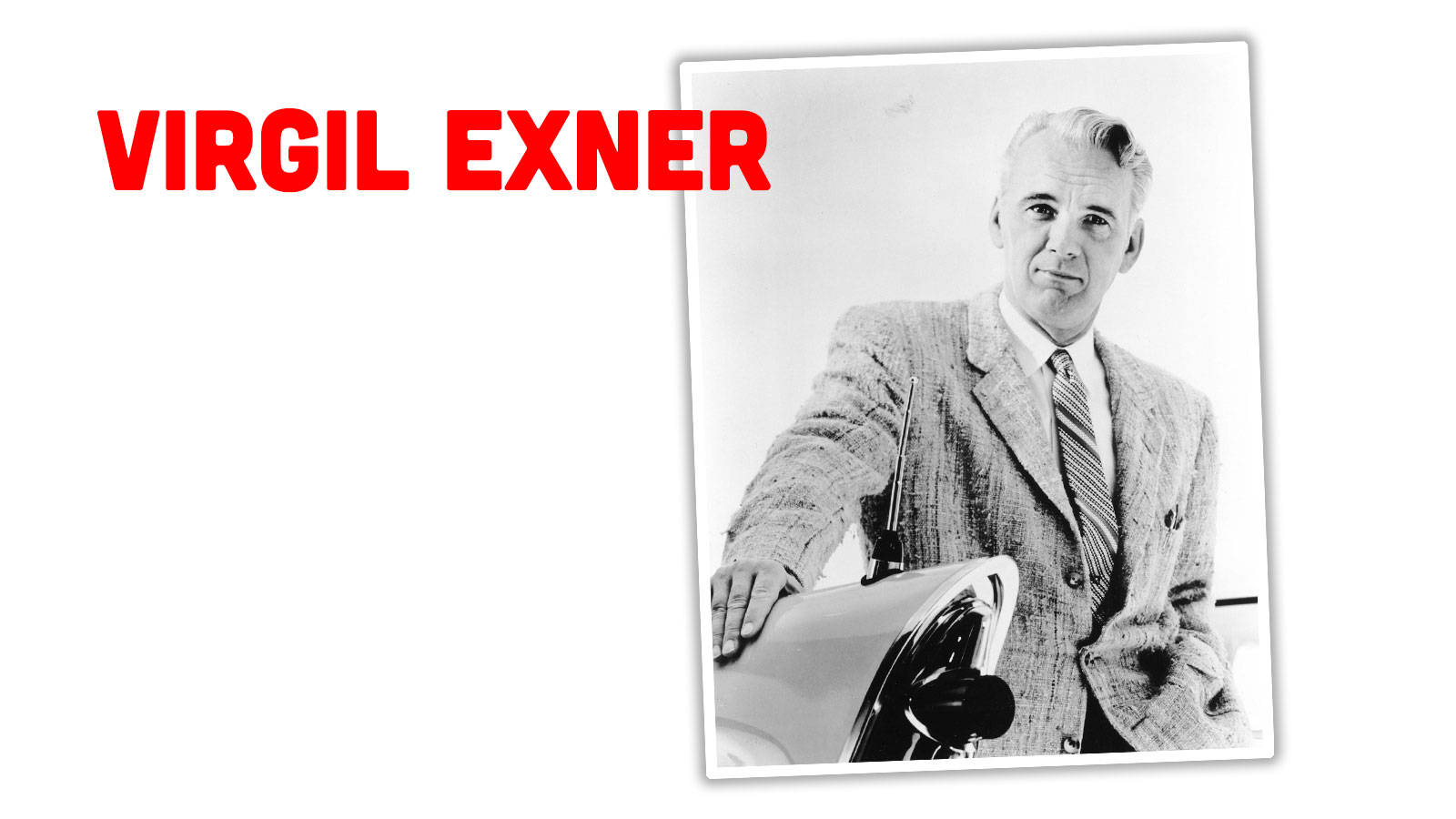 Exner rightly assessed that Chrysler’s early post-WWII cars were staid and boxy, and went to work revolutionizing their look to be more in step with the post-war jet age. He was immediately successful, his new “Forward Look” designs were sexy and exciting, and sales improved dramatically. “Ex” as he was affectionately nicknamed, respected the great work being done by so many of Italy’s design houses and automotive bodybuilders, and soon established a friendship and business relationship with one of the best: Luigi Segre ran Ghia in Turin, Italy, and Exner saw the value of a relationship with an Italian Carrozzeria that could turn out high quality one-offs in relatively little time and at affordable costs. Soon followed a decade-plus long parade of Idea Cars that enthused the public, the media, and Chrysler management and customers.

In an internally published catalog about Idea Cars, Chrysler stated that they …”had to be more than just a show car that was simply a production model with special paint and upholstery. Yet it couldn’t be an impractical ‘dream car.’ It had to have a completely new body that would interest and even startle the casual observer. It had to have new, practical, usable ideas in body styling and passenger accommodation.” 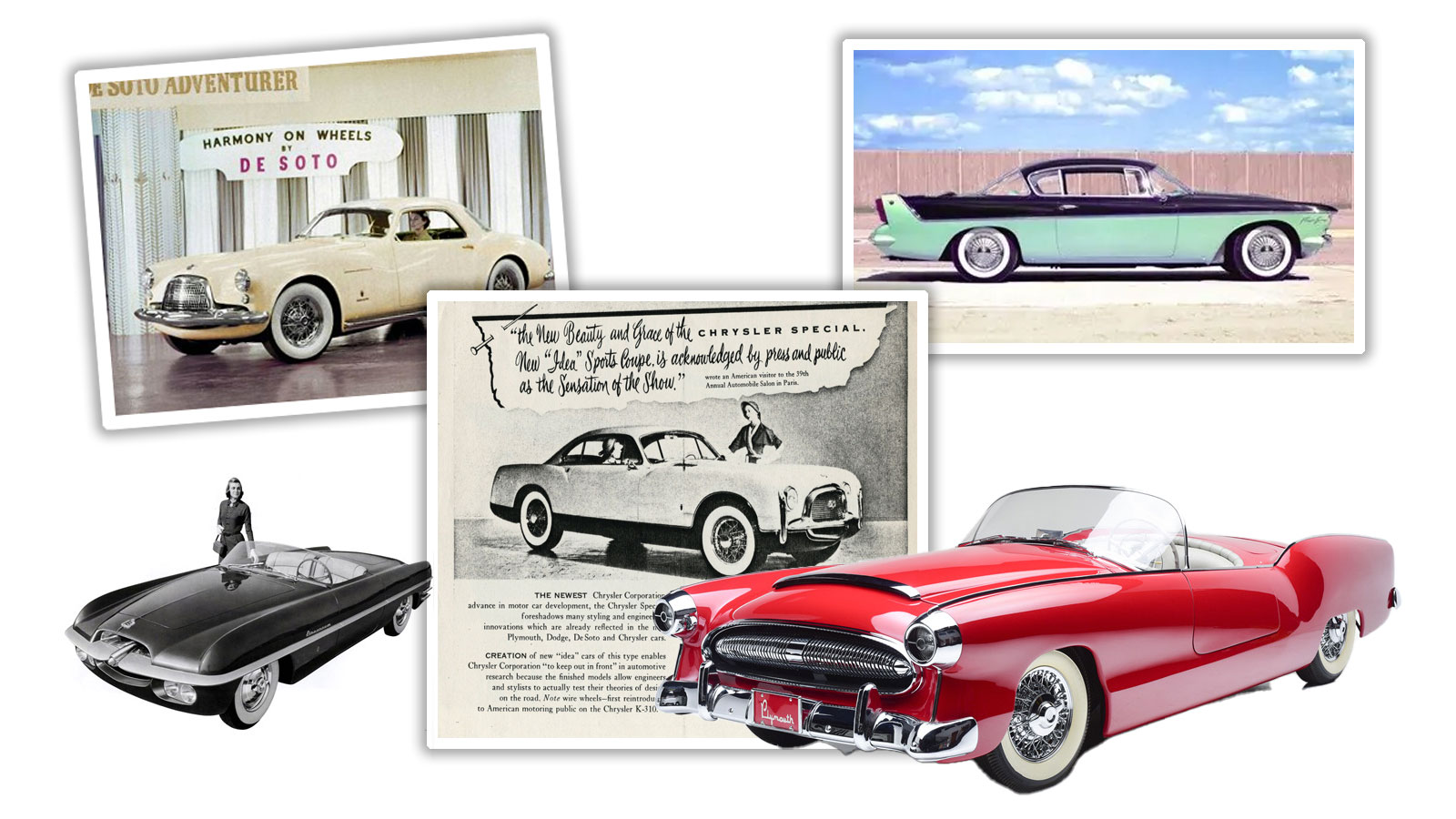 The Idea Cars are well known to anyone who is a student of automotive design, and include landmarks such as the Chrysler Special, the K-310, Flight-Sweep I and II, the original DeSoto Adventurer and Adventurer II, the GS-1, Plymouth Belmont, several iterations of Dodge Firearrow and many others. Of the 28 vehicles built from 1940 through 1961 that Chrysler identifies as Idea Cars, 24 of them were built in cooperation with Ghia; largely designed by Exner and his staff in the United States, then hand built and detailed by Ghia in Turin.

Once their days as dazzling turntable toys are over, some concept cars spend a quiet retirement in the carmaker’s museum or heritage collection. Over the years, many have been appropriated by design studio chiefs or other corporate executives for use as personal transport. Some are disassembled and the parts reused in the creation of other concept cars. Far too many have been cut in to pieces or crushed whole and destroyed. 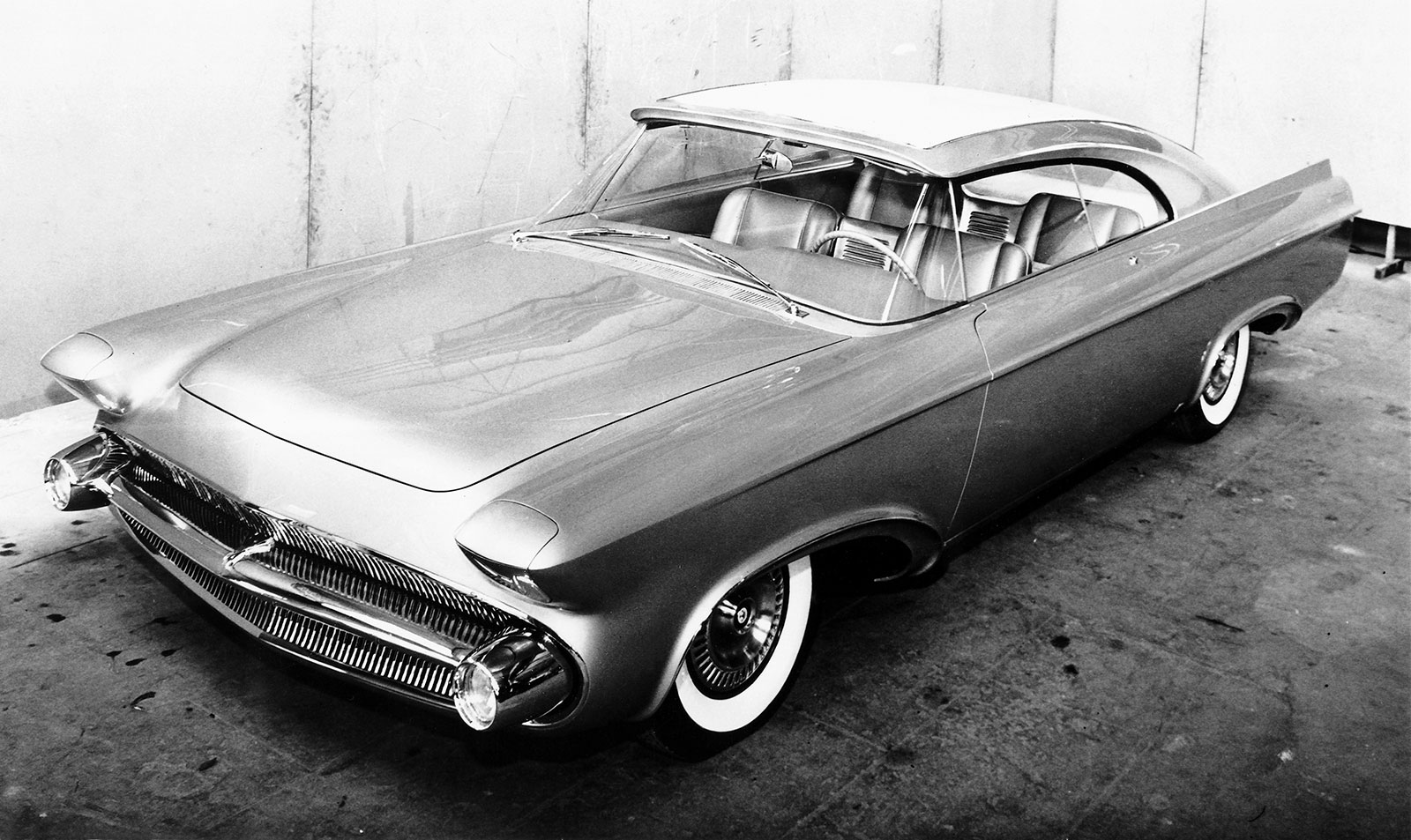 One of Exner’s jet-aged concepts, the Chrysler Norseman of 1956, like “Luca Brasi” of The Godfather fame, now “sleeps with the fishes.” The Norseman’s principle design innovation was the use of a roof section that was cantilevered from the rear and appeared to float over the front half of the car, using no thick, conventional windshield pillars, Mr. Exner’s main goal with this design was to make the car appear “visually lighter” and, to improve the driver’s forward visibility without thick “A pillars” to impede the view. In place of the traditional windshield posts, the Norseman employed chromed steel rods at the corners of the windshield to help hold up the roof and support the glass.

The Norseman was a lavishly good looking car, combining a sweeping fastback rear end design and Chrysler’s own take on a tailfin and bumper treatment. The Norseman also employed hideaway headlamps up front, and a large yet finely detailed chrome grille. The Norseman’s cabin design was elegant and filled with chrome and other luxury detailing, including thickly upholstered front bucket seats with a wide, padded center console in the middle.

As with most of the rest of Chrysler’s Idea cars, Exner and his styling team designed the car, and then provided Ghia with a Chrysler chassis and powertrain. The car was built in Turin during the first half of 1956, and completed in the early summer. On July 17, it was loaded aboard the Italian luxury cruiseliner Andrea Doria, which was preparing to embark for New York. The Norseman, being more than a mere automobile, was specially crated and packed into the Doria’s Number 2 cargo hold with great care to ensure it made the 4000 mile journey to America safely and without suffering any damage.

Sadly, the Norseman never got to strut its stuff and show its innovative design features to the world on the 1957 show car circuit. Because, in one of the worst civilian maritime disasters in history, the elegant Andrea Doria, sailing just off the coast of Nantucket and only a few hours from safe harbor in New York, was struck broadside by the SS Stockholm, another passenger liner, of Swedish registry, at around 11:00PM on the evening of July 25, 1956. The gravely wounded Doria took on water and began listing immediately, but somehow stayed afloat, well into the next morning, at which time, with her nose fully submerged; she pointed her tail toward the sky, and began a tragic dive toward the ocean bottom with the Chrysler Norseman aboard.

The injured Stockholm remained afloat and even though her ride height had dropped several feet due to the damage to her bow, she was able to assist in rescuing passengers from the Andrea Doria, and miraculously steamed into New York harbor under her own power. 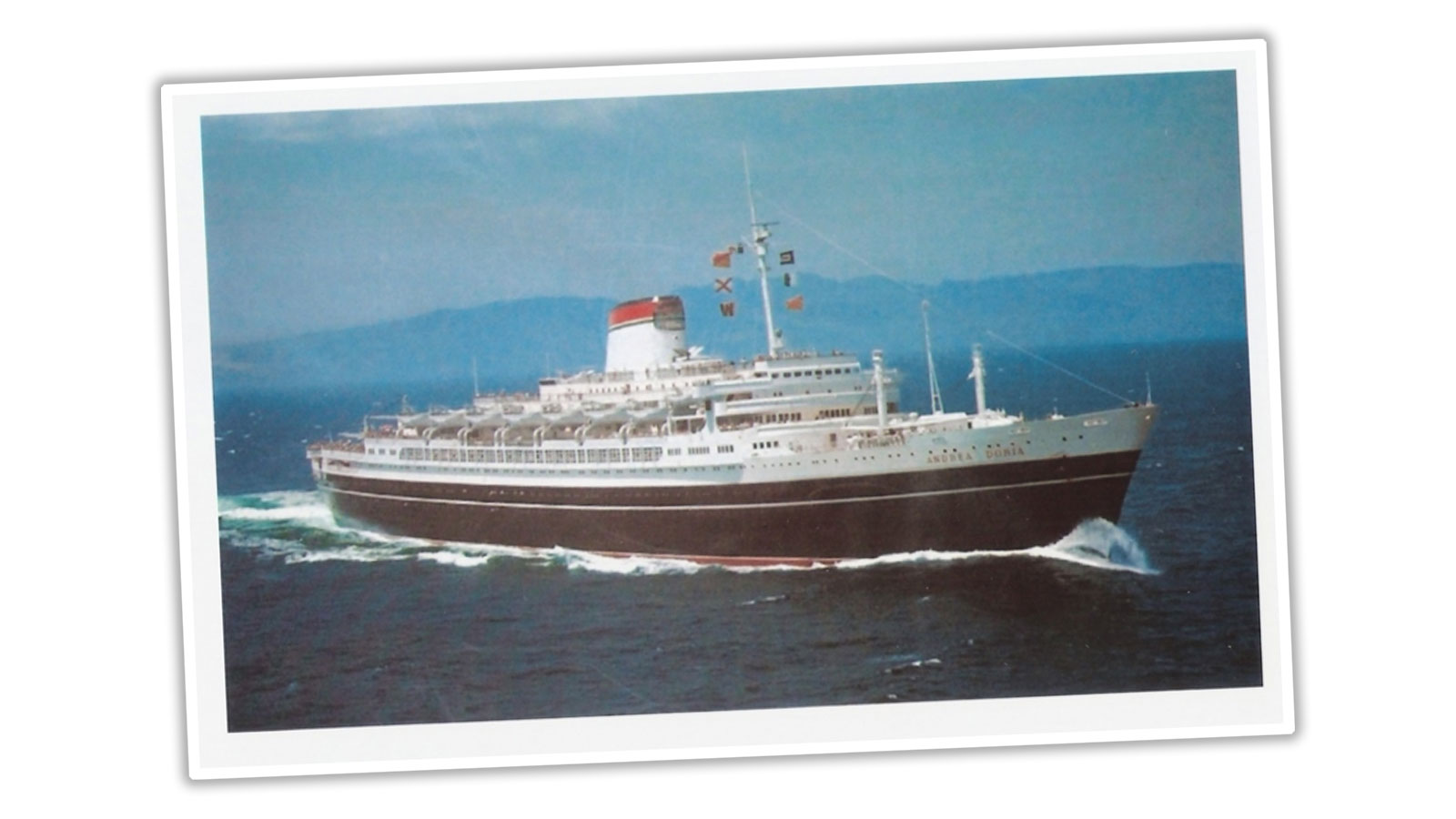 Naturally, there were numerous inquests as to how this tragedy could have taken place; Given the dark foggy conditions at the moment of the collision, it is likely that both ships were traveling slightly too fast, and it’s generally accepted that various crew members failed to properly read the radar signals showing the other ship’s location and direction of travel. It’s unfortunate that the two ships failed to contact each other or otherwise communicate their positions, in which case the disaster might have been avoided. Five people aboard the Stockholm died, and approximately 46 Doria passengers and crew members also perished.

Strange though it may sound, the Norseman’s fate is, perhaps in some ways, better than the destiny that awaited it in the United States. Chrysler’s plan for the car was to tour the 1957 auto show circuit. Then, in order to test the structural rigidity of its unusual roof design, it was scheduled to be crashed at Chrysler’s Proving Grounds. The Norseman would surely have impressed show goers had it made it to the United States and safely into Chrysler’s hands. But in a way, it is now part of a greater more historic story, as having been aboard the Andrea Doria’s final fatal voyage, it avoided the injustice of crash testing and systematic destruction once its days on the auto show tour were done.

Chicago native Joe Bortz has purchased rescued and restored many of Detroit’s most famous concept cars, including some that have been cut into many pieces and long thought destroyed. One of the world’s experts in the area of factory design studies and concept cars, Bortz knew of the Norseman and its unfortunate fate. He wondered, given today’s advanced industrial diving techniques, if the car could be located within the ship, extracted, brought to the surface, and restored – a whole new spin on the notion of a Barn find. After some research a few years back, Bortz was introduced to an industrial diver who claimed he could do the job. Bortz pursued additional research plus discussion with scientists qualified to assess what the car’s condition might be after more than 50 years under water. Bortz and company concluded that the ravages of time, extreme underwater pressure, and the corrosive salt water, will have reduced the hapless Norseman to little more than rusty sludge. 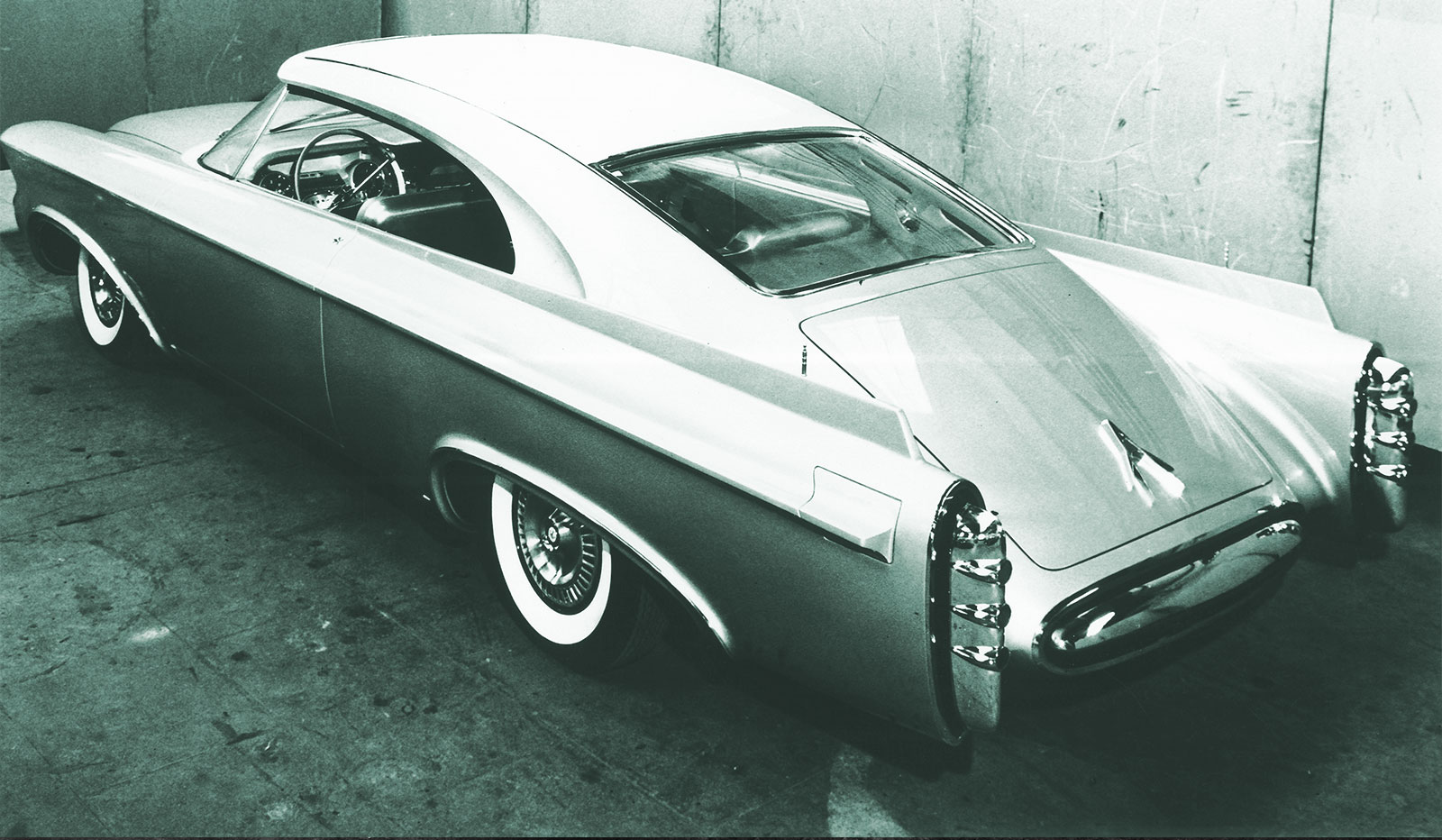 According to an article on Hemmings.com:

“In the mid-1990s, David Bright, a leading underwater researcher and explorer, wrote on his website about finding the remains of the car. “While looking for a lost diver, I had an opportunity to see the Norseman for myself in the cargo hold,”; he wrote.

“Normally, all passenger cars were placed in the garage section of the Andrea Doria that is slightly aft of the collision point where the Stockholm impaled the Doria underneath the bow wing bridge. These cars would have been placed onto the Doria by use of a crane and meticulously parked in the garage and arranged strategically for stability. However, the Norseman was no plebian passenger vehicle and was specially packed and treated with extra care. The Norseman was put into a wooden crate and placed in the number 2 cargo area. The crate had disintegrated and the car was in very, very poor condition. The ocean’s salt water invaded the Norseman&#39;s metal and most of the car is rust, corrosion and a heap of indistinguishable junk.”

Thus, the Chrysler Norseman rests aboard the Andrea Doria, which lies on her starboard side, off the coast of Nantucket, Massachusetts, some 250 feet below the ocean’s surface.

Read All My Posts »
PrevPreviousOur Pal Doug DeMuro Borrows Our Aston Martin Cygnet, The Smallest And Strangest Aston Ever
NextMeet The Italian-Styled Show Car That Inspired The New Hyundai N Vision 74Next