There’s been a whole lot of hype around Hyundai’s N Day this year. Not only were rumors of a production electric N car flying like spitballs in a middle school cafeteria, Hyundai released a lead teaser image of something very wedgy and very winged under a cover. While Hyundai has confirmed that an Ioniq 5 N will be arriving next year, fans will likely be disappointed to know that lips are sealed regarding details. However, Hyundai does have a pair of new prototypes to show off, and the wedge-shaped thing under the cover goes ridiculously, unbelievably hard.

David’s already covered the prototype with more near-term importance, so I’m here to talk about the really exciting one – the Hyundai N Vision 74. See, back in the ‘70s, Giorgetto Giugiaro whipped up a nifty coupe version of the Hyundai Pony that never made production. Americans might not be familiar with the Hyundai Pony unless they watched the Red Green Show, but here in Canada we did more than just duct tape old Hyundais together – we actually drove them. While the Pony coupe would be vaguely familiar to any Canadian who lived through the ‘80s or ‘90s, the N Vision 74 takes Giugiaro’s vision and sends it to compete in this year’s overfender nationals.

This thing looks gnarly, from hectic box flares to turbofans to a very angry set of pixel daytime running lights. It’s a hard-edged lit-up anti-hero car for whatever cyberpunk dystopia eventually caves in our front doors with size 14 boots. Its proportions are absolutely enormous – 16 inches longer than a Bugatti Chiron, three-quarters of an inch wider than a Ferrari Testarossa, half an inch lower than a Lexus LC 500. The wheelbase is a whopping 2,905 mm long, longer than that on a Mercedes-Benz G-Wagen. The dimensions on this thing are absolutely unreal. More importantly, the N Vision 74 isn’t just a pretty face – it may just save trackday driving through the use of one seriously innovative powertrain. The N Vision 74 is a hybrid, but it doesn’t burn much other than rubber.

For starters, there’s a 60.4 kWh battery pack driving the rear wheels through two electric motors. Not only does this promise a delicious rear-wheel-drive handling balance, it also allows for some clever torque vectoring. On the practicality front, range is said to be more than 600 km (373 miles) on the WLTP cycle, right up there with some of the better long-range EVs on sale. Pleasant, kind, sensible stuff so far.

Now we get to the hybrid part of the equation. Nestled deep in the N Vision 74 is a hydrogen fuel cell with a nice, lightweight hydrogen tank capable of storing 4.2 kg of the stuff. The fuel cell stack can generate a decent 85 kW of juice, great as a range extender for topping off the battery while on the go. However, that hydrogen fuel cell’s role isn’t just as a range extender. It’s also there to ram electricity to the motors as a sort of overboost function, bludgeoning the rear tires to a pulp in tandem with the battery pack whenever conditions allow. Not only is the end result a face-melting 670 horsepower and 664 lb-ft of torque, this injection of rage means the N Vision 74 can actually hold up to track driving, something most street-legal EVs don’t do a brilliant job at. 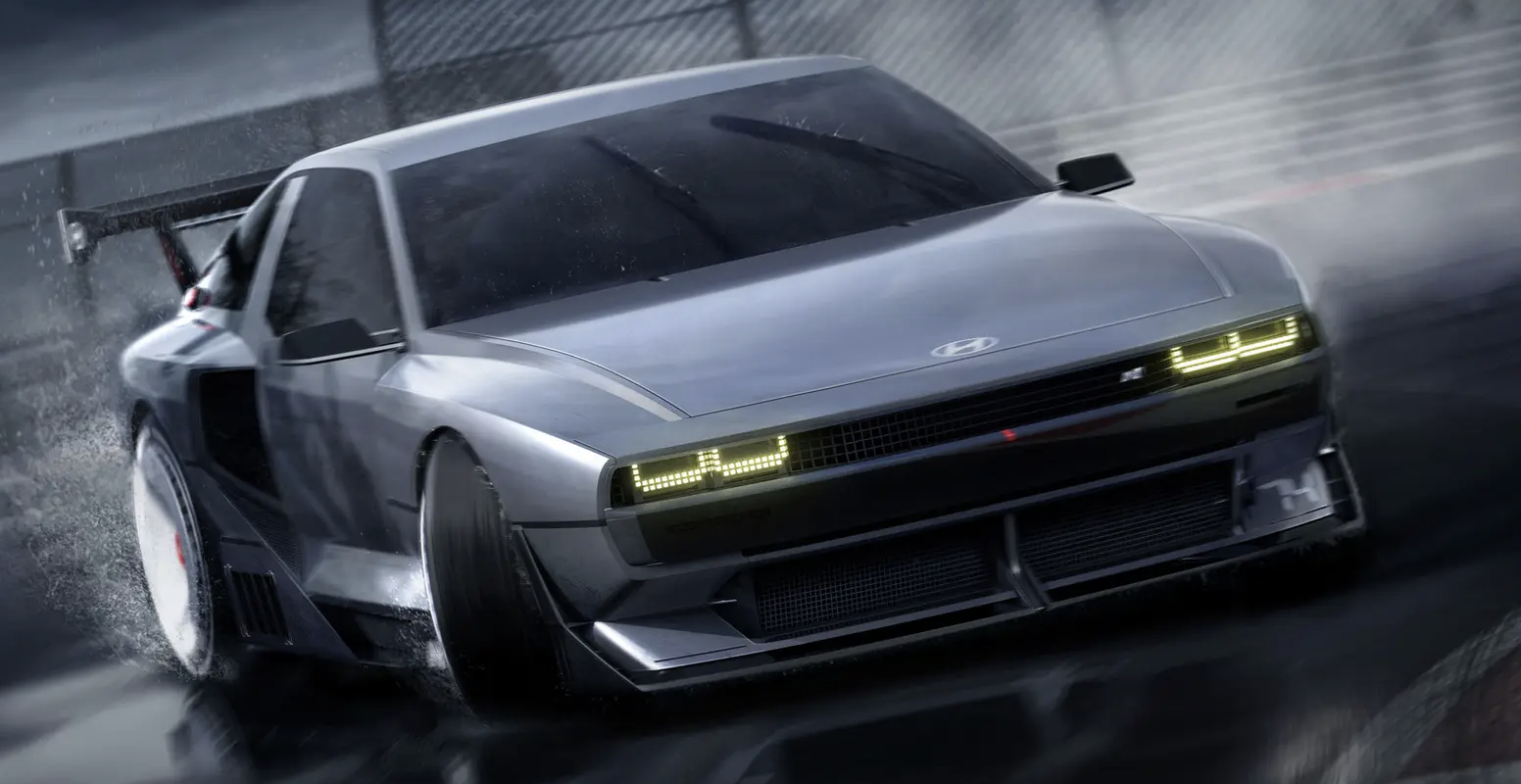 While some gasoline-powered vehicles hate track work, electric cars really hate track work. All those wide-open “throttle” events put a serious dent into range while properly taxing battery cooling systems. Why? Because batteries have thermal operating limits, and current generates resistive heat as it passes through a conductor. (You may have heard of I^2*R losses – heat goes up with the square or current). The harder you pound on the pedal in an electric car, the more heat is generated by the battery, and the less happy the battery gets.

The hydrogen fuel cell in the N Vision 74 is a method of getting around this. In addition to range extension and providing a boost of peak power, the fuel cell carries some burden of sending electric current to the motors in order to give the battery pack a chance to breathe. After all, reducing pack discharge rate is a great way of extending range and promoting battery cooling. Of course, the caveat is that hydrogen filling stations aren’t exactly plentiful, but that could change in the coming decades.

Truthfully, there’s a lot to love about the N Vision 74. I like the fact that it’s rear-wheel-drive and looks absolutely mental, I like that it uses hydrogen as a boost rather than as a sole propulsion method, and I like how it gives hope about the future of long track stints. I absolutely love track driving, and the electric age worries me a touch in terms of open lapping. We may soon be in a weird spot where we can’t really roll up to the track in our new daily drivers, go lapping for the afternoon, have the 20 to 30 minute sessions we’re used to, and simply drive home. Hydrogen might be one form of light at the end of the tunnel.

Thomas is a Nu Rave-blaring, heel-toe downshifting, maple syrup-swilling, chassis-geeking, junkyard parts-hauling, floppy-haired scenester who's been writing about cars since college. His current ride is a 2006 BMW 325i with the six-speed manual gearbox. Instagram: @thomas.hundal Twitter: @thomashundal
Read All My Posts »
PrevPreviousThe Hyundai RN22E Is A Track-Focused Hyundai Ioniq 6 Meant To Show How The Upcoming Hyundai Ioniq 5 N Hatchback Will Conquer Racing’s Archnemesis: Weight
NextCold Start: Dad Will Never NoticeNext