The Hyundai RN22E Is A Track-Focused Hyundai Ioniq 6 Meant To Show How The Upcoming Hyundai Ioniq 5 N Hatchback Will Conquer Racing’s Archnemesis: Weight

Electric cars are heavy, and Hyundai’s handling-focused N division gets that. That’s why, prior to its exciting reveal that the Hyundai Ioniq 5 N hatchback is coming in 2023, the brand released the RN22E concept car based on the recently-shown Hyundai Ioniq 6 sedan. “We are challenging and studying the physics limits of heavier EVs,” Hyundai begins in its reveal. Here’s what else we know about this concept car meant to showcase how the tech Hyundai will put into its first all-electric N-car.

“If RN22e can master [challenging and studying the physics limits of heavier EVs], the future potential is endless,” Hyundai continues in its reveal clip, shown below. So, how does Hyundai plan to combat weight? Well, the same way automakers like Porsche and BMW have been doing it for years on larger sedans and SUVs, and the same way Nissan did it with the GTR: Heavy reliance on torque vectoring, smart suspension design, and upsized cooling bits.

Here’s what Hyundai says about the 577 horsepower, E-GMP platform-based sedan’s corner-carving strategy (Note: I wish I knew more about this car than what’s in the press release, but I just don’t right now, so I’ll be regurgitating because this car is worth it): 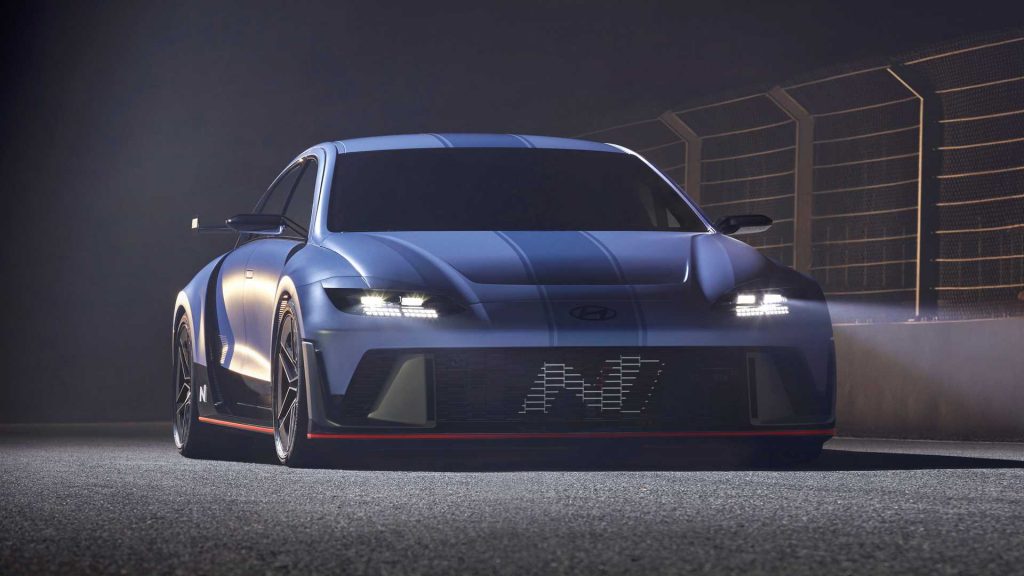 As for the upsized cooling bits, the brand says it has developed “EV specific logic to minimize derating,” which is performance reduction resulting from high temperatures. The brand also says its track-oriented EVs will focus on strategic preconditioning logic for the 77.4 kWh battery to improve charging speeds, with the 800 volt RN22e quoted as able to charge from 10 to 80 percent state of charge in under 18 minutes. As for brakes, Hyundai acknowledges that, “With heavier weight, strong and consistent brake performance is a must.” From Hyundai:

To enhance RN22e’s racetrack capability, N focused on cooling and braking to enhance endurance. RN22e provides track-optimized settings to let customers enjoy the circuit without derating. Having four piston monoblock calipers and a 400-mm hybrid disc allows RN22e to withstand the weight of its power electric (PE) system. In addition, Hyundai N will use RN22e to study how to deliver dynamic movement with regen-braking that precisely controls yaw and corner attack. 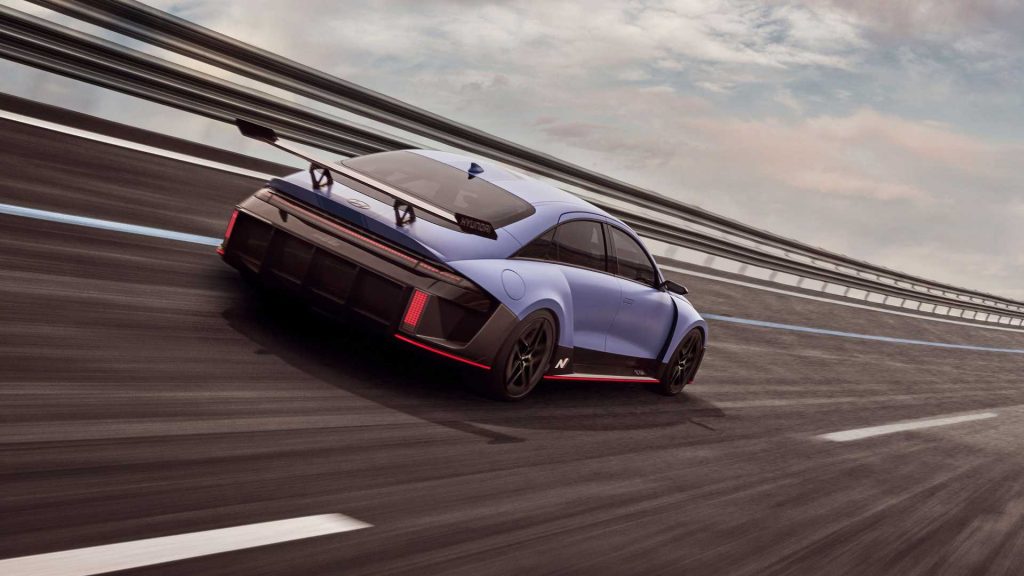 You may notice sounds in the video that you might not normally expect from an EV. Hyundai has synthesized these sounds and played them through the vehicle’s speaker, not unlike other brands like Audi and Ford have done with their E-Tron GT and Mustang Mach-E, respectively. I personally find these fake sounds to be additive to the driving experience when going fast, though I don’t know if my position on that will change over time. Also mentioned are artificial shifts called “N e-shift.” Here, let Hyundai tell you a bit about that:

As Hyundai N develops and verifies state-of-the-art technologies for transfer to N production models, RN22e plays an important role as the rolling lab for upcoming EV N models. Knowing what exhilarates enthusiasts, N is developing new features, such as the emotional driving experience for electrified models. RN22e provides N Sound+, which generates sound from the interior and exterior speakers, for a dynamic driving feel. In addition, N e-shift integrates the vibration and shifting feel with N Sound+. As it is a rolling lab, where Hyundai N continuously develops advanced technologies, these emotional driving experiences will be further developed in various types via RN22e, so that drivers can select their own fun. 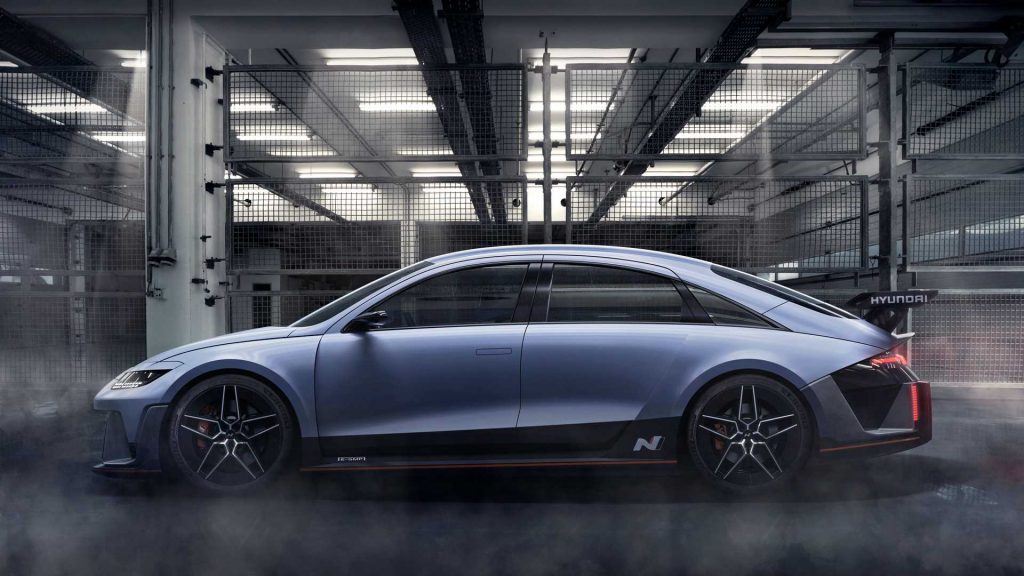 Though the first Hyundai electric N is expected to be the Ioniq 5, set for release next year, the RN22e is based on that car’s newer sibling, the Ioniq 6 sedan. It’s a full-size sedan at over 16 feet in length, nearly 80 inches wide, and 58 inches tall, and you can bet it weighs at least 4,500 pounds, but with a 160 kW (215 hp) motor up front and a 270 kW (362 hp) motor out back — which total 577 ponies — you can bet the thing will be quick, and with the characteristic low center of gravity of an EV, combined with Hyundai’s torque vectoring strategy and some clever steering and suspension trickery, it’ll be interesting to see just how truly track-oriented the Ioniq 5 N will be. 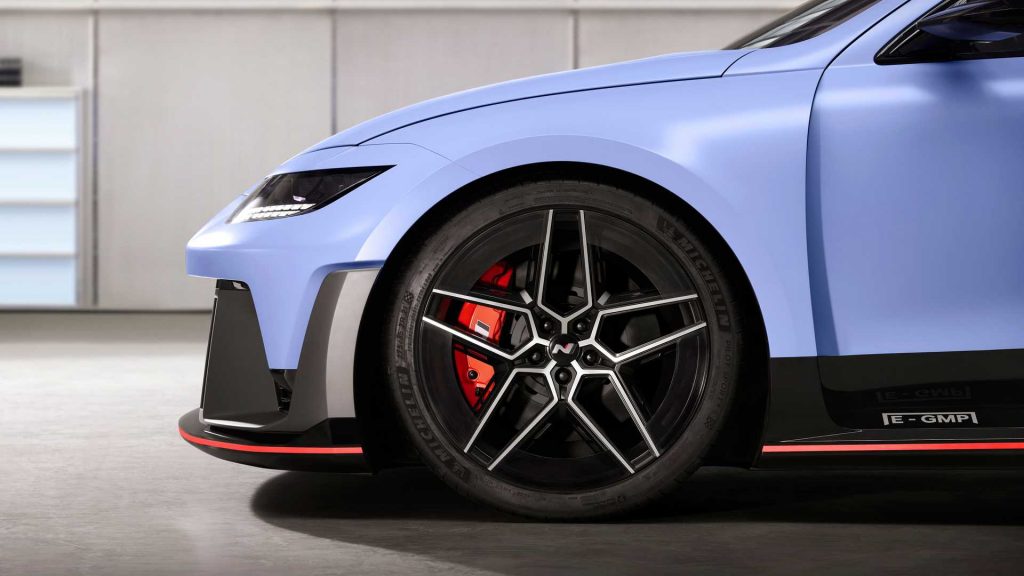 “These [aforementioned] aspects of the RN22e,” Hyundai concludes at the end of its reveal of the car, “will transfer into a production car arriving soon.” That production car will be the charming Ioniq 5 that many of us have come to love.

Rust-loving Jeep man, cofounder and EIC of The Autopian, Jason's friend. Email: david@autopian.com
Read All My Posts »
PrevPreviousThe Toyota Crown Is Back After 50 Years And Is Bringing Up To 340 HP With It
NextThe Stunning Hyundai N Vision 74 Goes Fast As Hell By Augmenting Battery Power With HydrogenNext