Working for Torch, I am starting to feel like Dennis Hopper’s character in the film Apocalypse Now, blindly following a madman into the abyss.  To quote Dennis from the movie:

If Marlon Brando’s character in the film weighed a lot less and was really into car taillights, it would be sort of the same thing. Check this latest concept that Torch had requested [Editor’s Note: I believe I demanded – JT] I explore and you might agree.

With cash slowly going the way of beepers and CRT televisions, we don’t put much thought into physical money and its many forms anymore. It’s long been understood that the currency of the United States is likely some of the most unimaginative and even unattractive on the entire planet. While other nations get gorgeous color portraits on bills and interestingly shaped coins, Americans are stuck with monochrome green and gray paper money and dull looking discs.

Some places have even taken the sculptural aspect of physical coins to incredible levels of scale, the most notable being the Yap island group in the Pacific. This small country inexplicably features coins that can be up to eight feet in diameter and weighing hundreds of pounds. 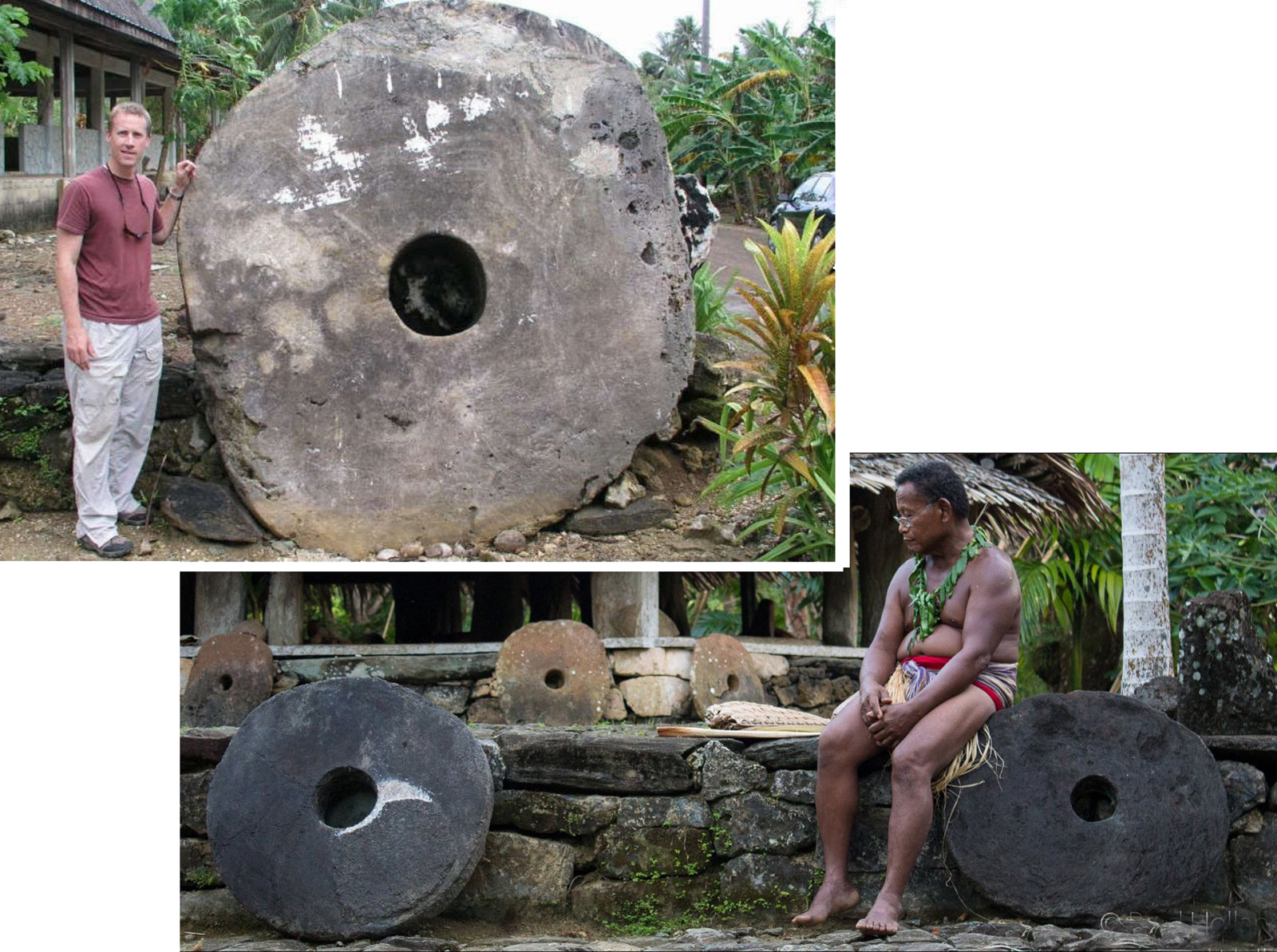 An even more interesting fact about these coins is that due to their weight they often do not move from the site in which they were first placed…they have ‘changed hands’ several times even though their location has not.  There is even a story of a coin that was on a ship that sank hundreds of years ago, yet this coin has gone through several owners despite being located at the bottom of the sea.

Yap residents understandably do not use difficult-to-move items as working day-to-day currency. However, there is one nation that is quirky enough to employ such giant coins for daily transactions. It’s the tiny island country of Jasonia. 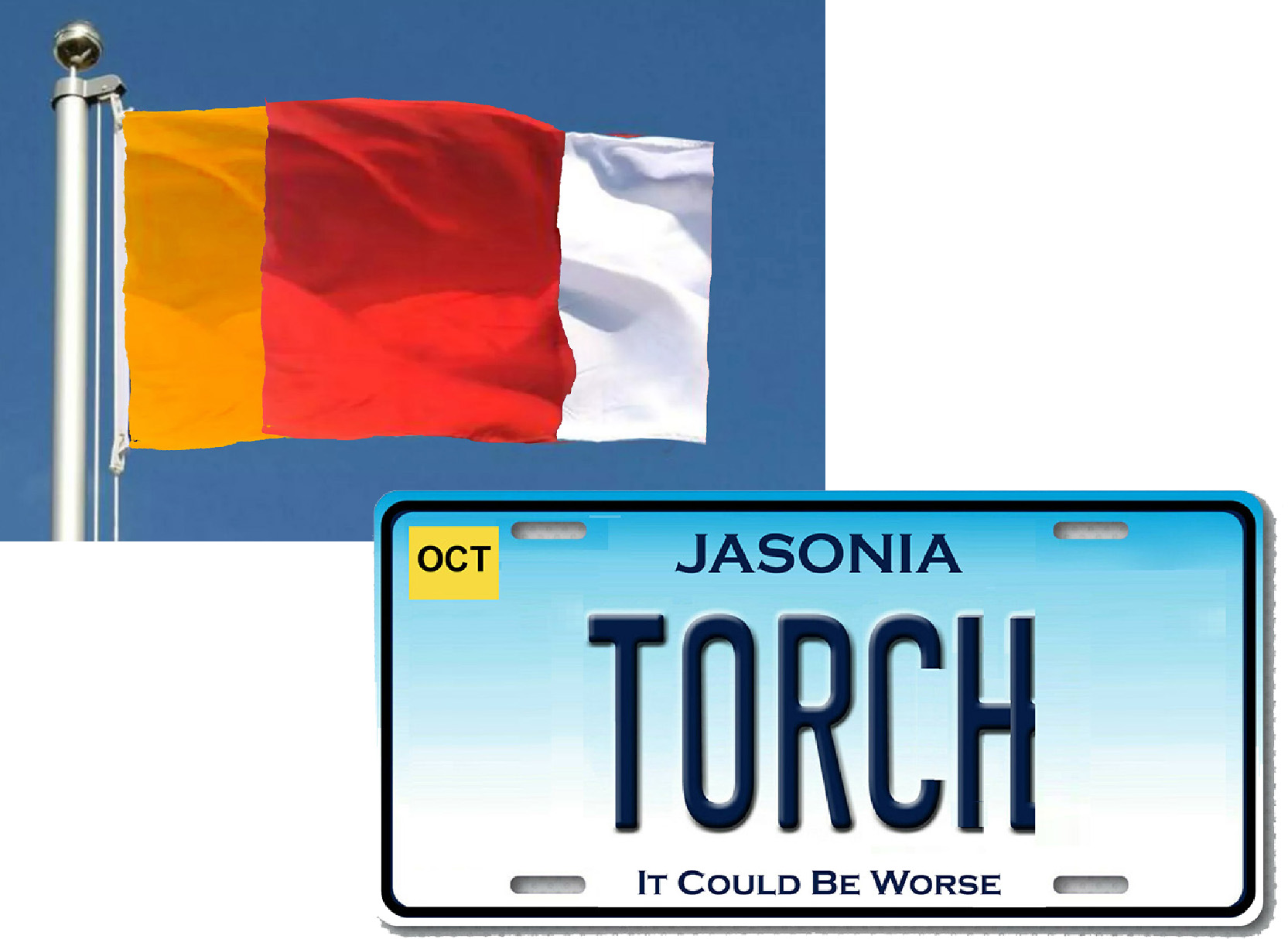 Dear Leader Torch, His Serene Highness of Jasonia, is terrified of electronic currency and demands that citizens exclusively use coins. He’s also afraid of people “losing money in couch cushions and shit,” so he prefers coins ranging from around a foot to almost five feet in diameter.

Such heavy items are understandably difficult to move, so the vehicles that Jasonians drive need to be able to assist in even simple transactions. Dear Leader even imported a DKW/Auto Union Van and a Brubaker Box to his nation to show the indigenous vehicle industry “how it should be done” since his feeling is that the ideal car should be “futuristic and sort of stupid looking…you know, in a cute way…so good.”

Subsequently, the typical Jasonian vehicle is made to Torch’s liking and looks a bit like a toaster with windows. Jasonian cars are fairly common in design, with a passenger compartment up front and cargo space in back (either closed or open like a pickup), separated by different ‘money cartridges’ that carry the giant coins. The engine is located in back, and per Dear Leader’s orders all of them must be powered by air cooled rear engines (Torch has banned the sale of antifreeze on the island). 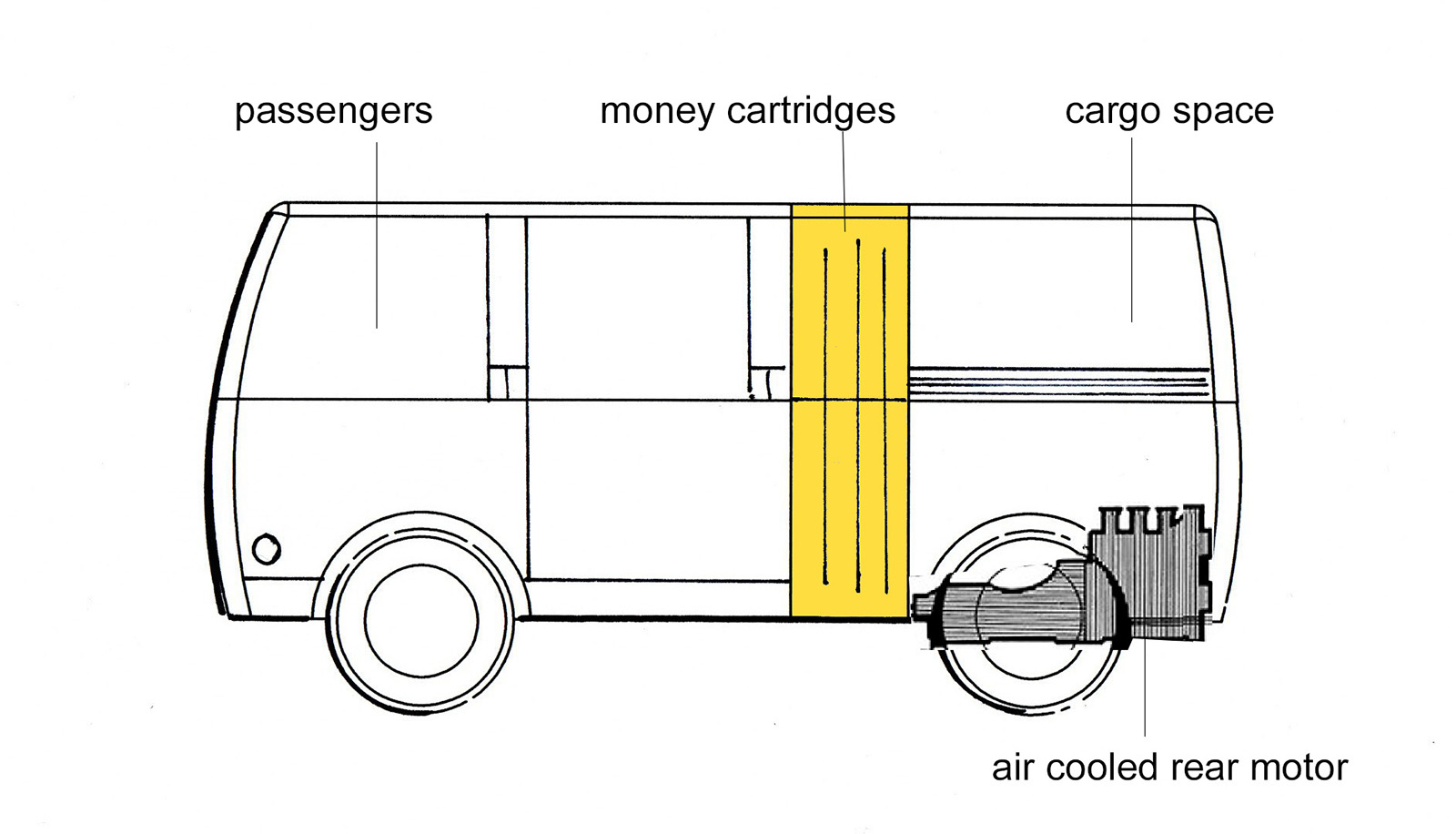 The ‘money cartridges’ feature gravity feed tracks to store the huge coins. There are several layers of tracks in the cartridge to accommodate more coins.

Every business on Jasonia is designed to facilitate in filling and distributing currency into these cartridges. Let’s take a look at how this plays out in typical Jasonian life.

You realize that a trip to the Banco De Jasonia is necessary to get you the needed cash for the day (no US-based banks were willing to set up shop on the island). This task is not that difficult, as you don’t have to leave your car. In fact you couldn’t even if you wanted to.

As you speak to a friendly teller (or use the ATM), the roof section over the money cartridge lifts up (either one section or the whole width of the roof over the cartridge, based on coin size) and coins are gravity fed in from a raised chute. Zig-zag tracks inside the cartridge attempt to slow the moving coins somewhat to reduce the impact of the heavy falling objects.  You still get a hellacious thunk from these things. 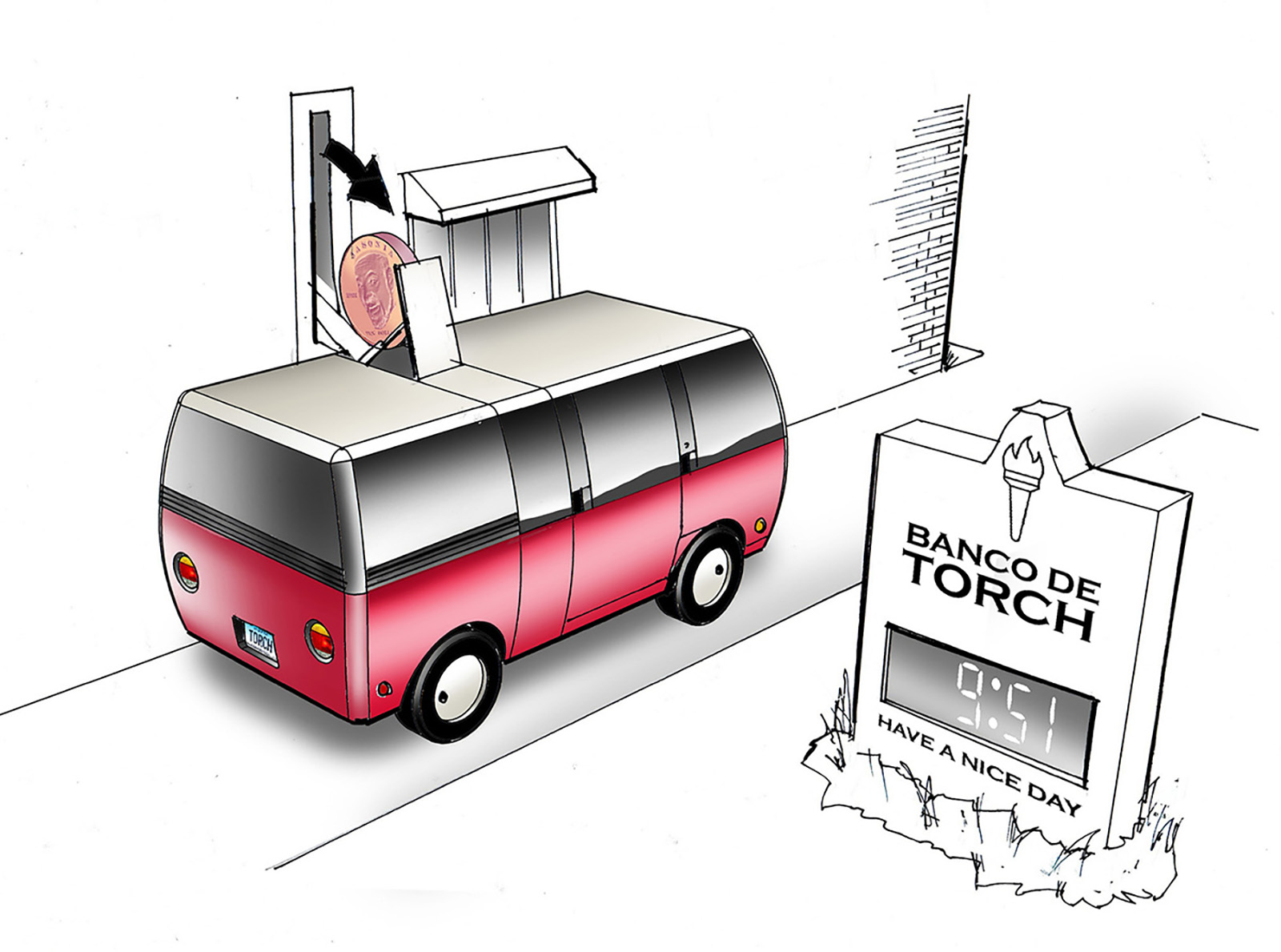 You’re ready to hit the streets of Jasonia and spend some of that hard earned cash. Let’s get a Supa Burga to start the day, or maybe a breakfast burrito. After placing your order through the crackling speaker, you type in the amount to be spent into a dashboard keypad…servos on doors at the base of your car’s money cartridge allow the needed coins to drop into a slot in the ground to pay for your hard earned junk food. You’re lucky…back in the day in old cars you would need to yank heavy levers to allow the cash to drop, and listen and count the loud ‘clunks’ as the coins fell. 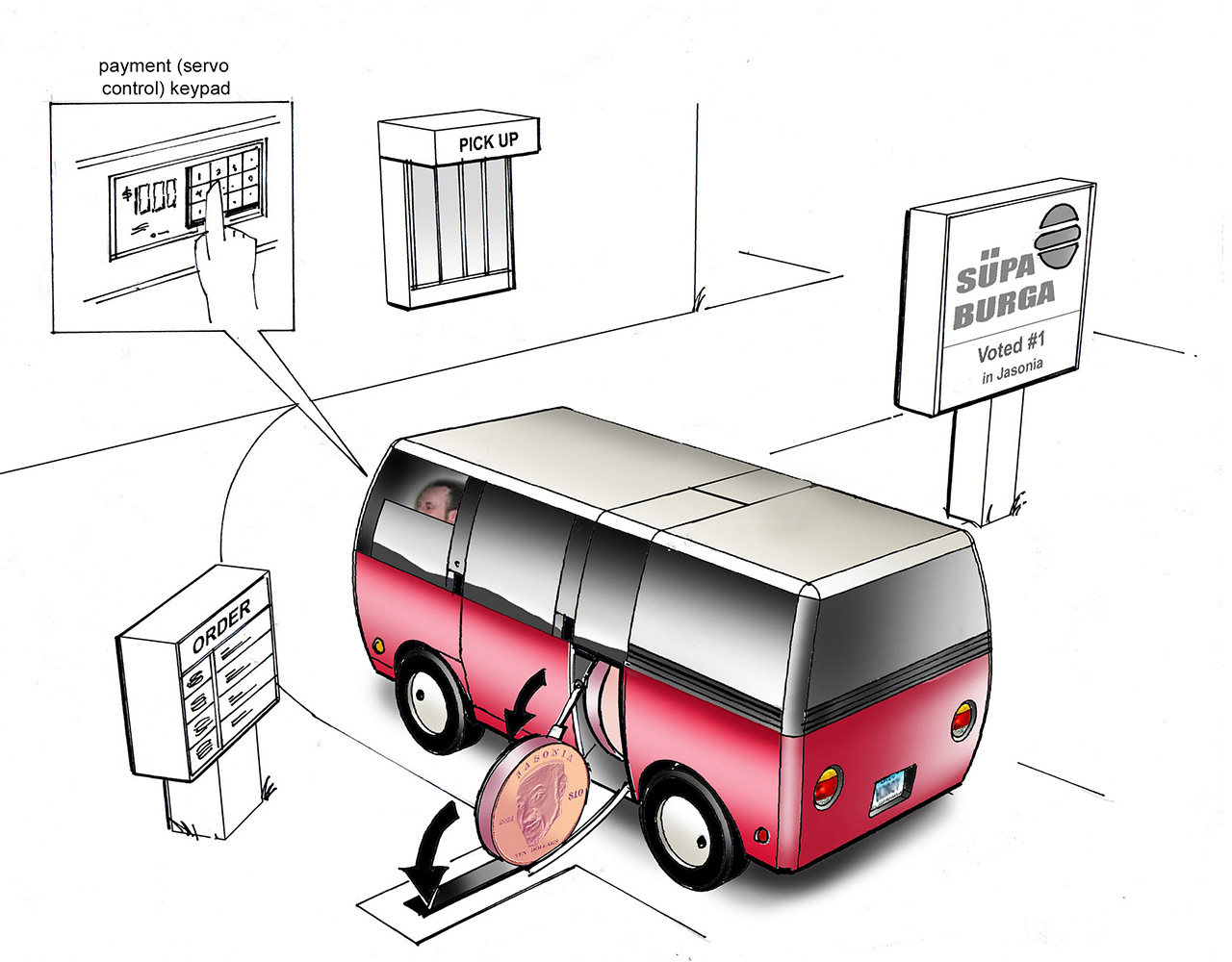 Note that $1000 coins rarely are used, except maybe when trading your vehicle in. You know, when the sales guy says “what would it take to make this deal today?” you can say “I got two $1000 coins in the slots of my trade…take it and we’ve got a deal.” Then the guy goes to “talk to his manager.”

So last week you bought lunch for your friend Mercedes the Charter Helicopter Pilot, so it’s high time that she paid you back. No problem…PayPal has built a number of ‘cash change’ stations on the island. For a small fee, you pull your car up to one side of the PayPal tower, while your friend drives up to the opposite side. You friend drops the coins to be exchanged into a ground hole, and conveyors lift the money into your money cartridge. You’re even. Simple, right? 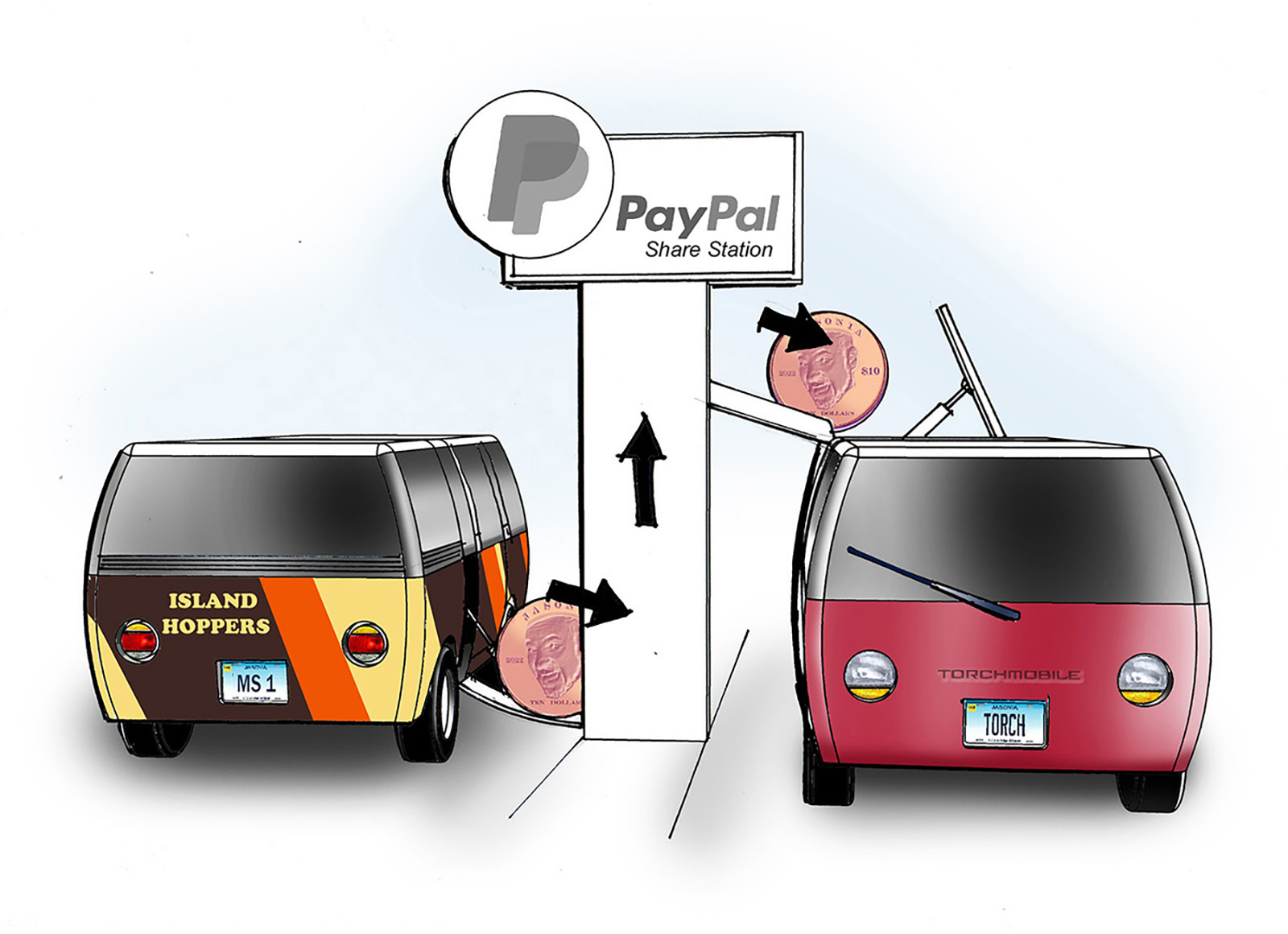 Rolling with the rolling cash

Some residents are more prone to flaunting their financial status by displaying their working capital.

Multi-platinum Jasonian recording artist PRNDL (pronounced PRIN-duhl) is a good example (his last hit ‘2 Much Koin’ crashed the Jasonian servers with downloads) with his extended wheelbase vehicle featuring so many money cartridges that he needs extra wheels and either a turbo Porsche flat six or a Tatra V8 to motivate his ride.  Dear Leader, by the way, HATES this thing but PRNDL’s tax payments fund a lot so he’s tolerant of it.

After several generations of this coffee-table sized money, younger people are finally becoming ‘woke’ to the fact that lugging around coins several hundred times the diameter of other nation’s spare change is a ‘bad thing.’ Dear Leader’s madness has left him vulnerable to coup attempts, but he is being protected and helped by his right hand man, Transportation Secretary of Jasonia, the honorable David Tracy. David is trying to find a way to unify the nation by turning the cumbersome system that Torch has created into something world beating.

First, David has to convince Torch to accept digital currency or risk being physically crushed by the rebels with something heavy…like those damn coins. But what will the people do with cars designed to hold giant discs?

The answer is that Jasonian cars can be converted to electric power, the former money cartridges can be changed to battery compartments, and rechargeable batteries in the size of the old coins will drop in at ‘fuel stations’ that simultaneously take your depleted batteries to charge them. The cells have positive and negative contacts on opposite sides so it’s just like giant watch batteries, and rubber perimeter trim protects them as they roll into place and touch metal contacts inside. Since most Jasonian vehicles have Volkswagen power you can drop it out and retrofit an electric motor pretty easily with just a few bolts. 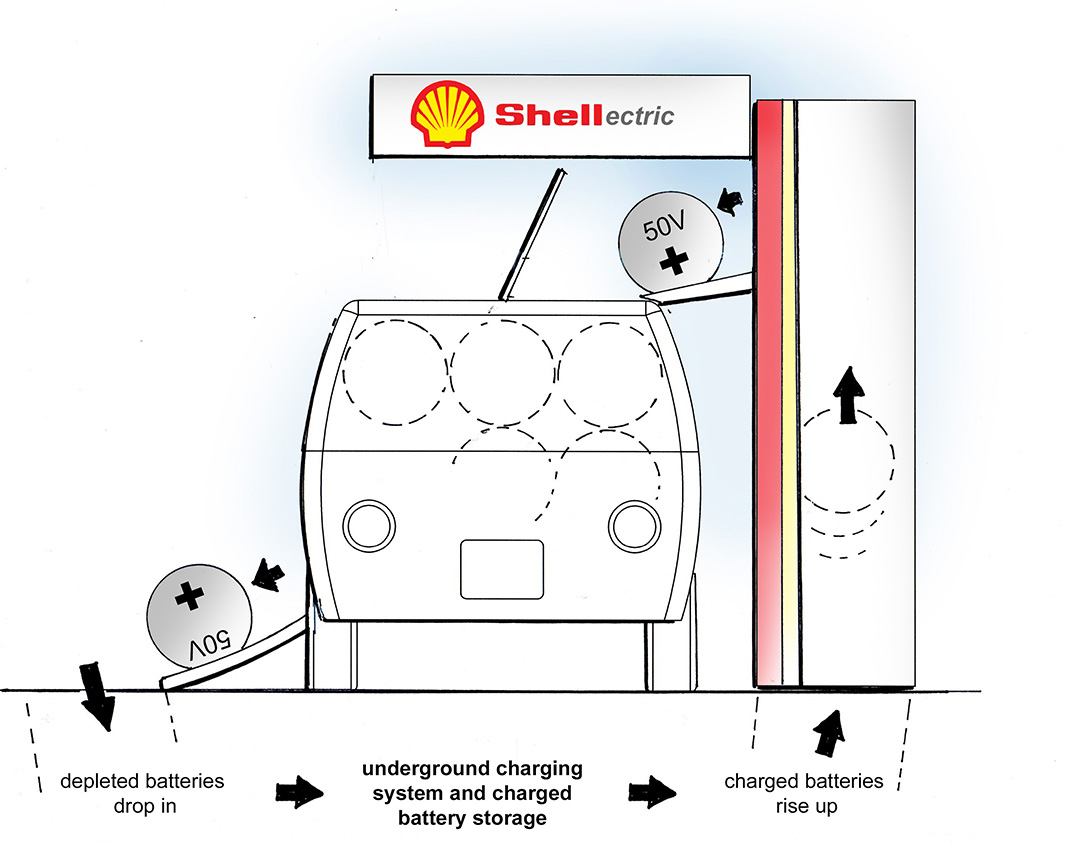 Even the PayPal stations could be used when your buddy wants you to “spot him a few volts,” like siphoning gas out of a tank.

Overall, a pretty ingenious solution.  While more developed countries force people to sit around forever while they ‘supercharge’ their $90,000 electric car and ruin the life of the $35,000 battery pack, Jasonians get power restored in minutes, even seconds.

Can David convince Torch to make the change and be a global leader in electric vehicle battery infrastructure? Can a tiny island nation succeed in a technology arena where others have failed?

Read All My Posts »
PrevPreviousThe Volkswagen ID.XTREME Concept Is An Off-Road EV Packing 3D-Printed Flares And Special Noises
NextI’m An MIT Enginerd And Battlebots Geek And This Is My Weird Van CollectionNext