Does “cancel culture” exist in the automotive world? I’m not talking about the results of some car executive or race driver being exposed saying or doing things that they really shouldn’t and having to deal with the consequences; I’m referring to the cars themselves, and I believe that cancelling exists.

Take a look at these posters featuring different eras of Ford Mustangs. Do you notice something that is conspicuous by its absence? 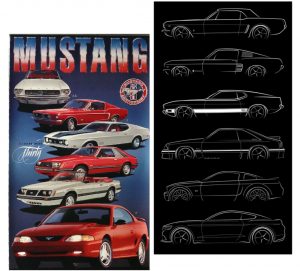 That’s right: it’s as if the Pinto-based 1974-78 Mustang II never existed. Look, you could be forgiven for leaving off a footnote in Mustang history, but it’s sort of odd when the fourth best-selling model year EVER of the car (after the 1965-67 versions) is just eradicated from the records of a lot of enthusiasts, like it committed crimes against humanity. People forget that the Mustang II was extremely popular since it made perfect sense for the current gas-lines energy crisis and was in retrospect not much worse than its contemporary rivals, if at all. Marketing makes it look like fun here:

I thought these were quite fetching at the time and told my dad that we should trade our own by-then somewhat dog-eared Mustang in on one. Sure, ours was a ’65 front disc brake 289 4 barrel convertible, but when you’re like six or seven years old it’s just an old car with a ripped top, and the II had AMBER REAR SIGNALS! Dad was not moved.

Admittedly, the II is not a great Pony car or car in general; it’s the archetype of problems of the malaise era. In addition to the negative seventies disco vibe and the lackluster performance, the cool cred by association for this thing was pretty low; the early Mustangs had James Bond and Steve McQueen while the Mustang II had Charlie’s Angels. 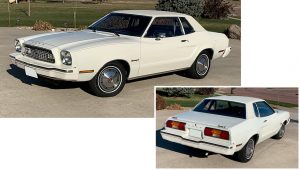 The year is alternate 1975, and Steve McQueen stars in the much hyped and long-awaited Bullitt II, which turns out to be a terrible movie. The plot has more holes than the fenders on a rust belt Datsun, and it’s a pretty dull film (I mean, the original was hardly fast paced between chases). The now thirty-something star seemed rather wooden and going through the motions in this screen turd. McQueen knew that he couldn’t beat the original Bullitt chase for pure speed, hence the sequel featured a Hertz-rented white Mustang II notchback coupe in hot pursuit on sidewalks, stairs and even in a building.  Critics were merciless; ‘even the chase seems tacked on’ quipped Roger Ebert. 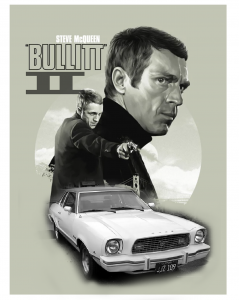 Source: Mondoshop and The Bishop

However, today ANYTHING McQueen touched or even glanced at is now considered gold.  Around alternate year 2020 Ford realized, like VW did with the New Beetle, that a retro-revival can only go so far.  As our black clad colleague from old Blighty mentioned, you can only make Xerox copies of copies of copies of an original Mustang for so long before it becomes an amorphous blob, and the Mustang used to be an innovator with each new version.  But why would the Blue Oval brand risk innovation when they could just reach back for more nostalgia, just a different mark? Hence the Mustang II 2: the return of the Puny Car.

Here is a rough mockup of what this car could look like, using an S-550 as a basis. The nose of the car follows the shape of the original II, and the stubby notchback shape simulates the Bullitt II rental car. 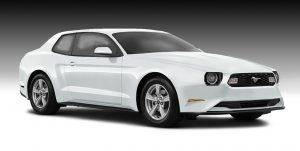 source: KBB and The Bishop

What you have is essentially the same formula of 2005 Mustang and the following Challengers and Camaro, but now applied to this rather unloved notchback coupe. With four cylinder engines now the norm in Mustangs, Ford decided that the McQueen-associated four-banger II would be a perfect revival just in time for the Pinto-based car’s fiftieth birthday, and the malaise era just keeps getting cooler all the time with people either not alive then or too young to know how shitty it really was (like me). As my Boomer Boss tells me, try paying up to sixteen percent interest for four years on a molasses-slow new car that barely started in the cold and see how nostalgic you are then.

At the back you can be damn sure that the New Two has the tri-colored taillights that were an American first back at the 1974 launch. 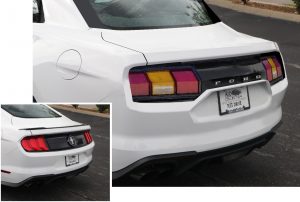 source: Auto Collection of Murfreesboro and The Bishop

Inside, it would seem that the big slab dashboard of the original II is perfect for a new car, since slab equals big screen, or several screens in this case. Oh, and the screens are framed by the dashboard padding, not just stuck to the top of the dash like a couple Acer monitors on stands. Who would do that? 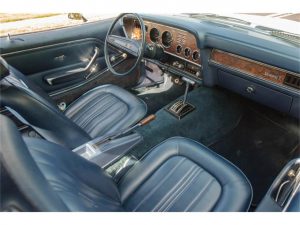 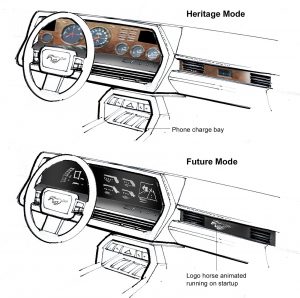 There are several modes for the dash displays:

Heritage: Just like the 1974 car with woodgrain and animated mechanical digital clock above the glove box.

Cobra II: As above but silver engine-turned trim

Future 1 and 2: Modern digital style gauges. Also, the logo horse runs across the area above the glovebox on startup.

My guess is there would be a fastback version as well, since that was obviously part of the Mustang II portfolio, including the infamous Cobra II, but this time with more than the original’s 140 horsepower.

Maybe with the McQueen connection, Ford would finally would stop pretending that it is 1964 1/2 over and over like it has for the past nearly twenty years. Instead, they’d pretend that it’s 1974. Such progress.

Personally, while I think the Mustang II probably deserves better treatment by historians than what it generally gets in this reality, I’m still not a fan of this rather subpar model or the idea of a revival of it. Associations with McQueen certainly wouldn’t change my opinion. I have to agree with our own Matt Hardigee- when it comes to pony cars and effortless, confident cool in the seventies, James Garner in a Firebird is the one to beat. 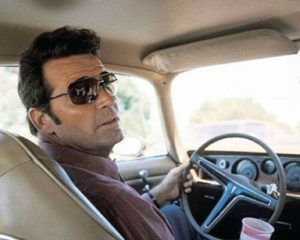 Read All My Posts »
PrevPreviousCanadians Will Have To Pitch Themselves To Buy A GR Corolla Morizo Edition Like They’re Ford GT Applicants
NextHalo Warthog, Amphicar 770, Cadillac STS-V: Mercedes’ Marketplace MadnessNext