A Daydreaming Designer Realizes The Dream Of The SuperFrunk

The term ‘don’t put the cart before the horse’ never really had a place in automotive design, yet cars seemed to adapt the front engine layout as pretty much standard very early on. We’ve talked before about the advantages of other drivetrain layouts in the kinds of cars that Jason admires, and honestly with EVs now there is absolutely nothing that is impossible. The whole three- or two-box car form doesn’t need to exist anymore, and we would hope that manufacturers will start to have some fun with these limitless parameters.

A few Sunday evenings ago when our offices at The Autopian Tower were empty and the staff was minding their own business at home, our own Matt Hardigee took to our Slack channel with the concept of an ultra-long-hood touring coupe with a massive frunk and essentially nothing behind the two seats. He offered up the below scribble, including his ideas for putting the motor in back and filling the rest of the car with batteries wherever possible. 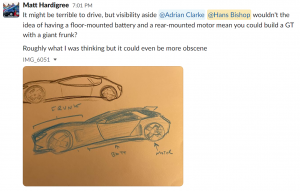 Another drawing shows what he wanted to do with the drivertrain: 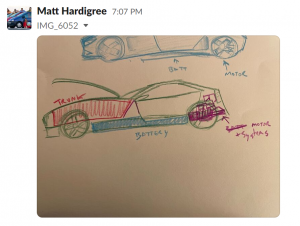 Of course, you can see that he asked for the opinions from either the staff car designer or the staff…whatever the hell kind of designer I am. Since our painfully honest Adrian Clarke was conveniently asleep in 3AM Britain, I was stuck with the task of politely telling him that it might be difficult to operate something from that far back and the batteries might need a bit of rearranging. Then Jason, ever the voice of reason, pushed the crazy level up by suggesting a split-down-the-middle hood before the conversation blessedly changed gears from this wacky ass idea.

Still, the more that I looked at the scribbles later on, the initial insanity I saw in the concept started to dissipate. Don’t get me wrong; it’s still crazy, odd looking and unadvisable, but not totally unfeasible. The sketches actually reminded me of two cars.

One of those cars was the bonkers Bill Thomas Cheetah. This sixties sports car looked a bit like a Hot Wheels car come to life and was about the most ‘cab backwards’ car ever built. You couldn’t push the seats back any further and still have them in the car. This thing was built as a track-based Shelby Cobra competitor, and supposedly made Shelby’s car seem like a Camry by comparison; a total handful to drive. 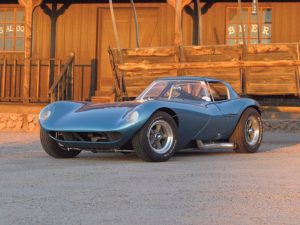 The other car that struck me as being similar in shape was the Fiskar Karma, an electric hybrid that became known for its rather unreliability mechanicals under a body with a rather curious design. The exaggerated wheels and fenders, combined with the long hood and giant headlights, seem to dwarf the tiny passenger compartment; it purports to be a sedan yet really has no business sporting four doors. 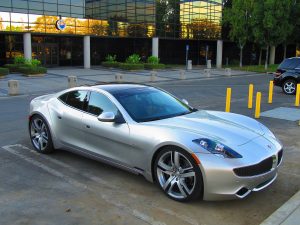 Still, there is something striking about both cars, and one wonders if, in an alternate reality, both could be redeemed.

The Cheetah concept is honestly too weird to die. It had been revived by some, but it would have been great to have seen some kind of more modern revival, maybe even in the late 2000s as an EV. At the same time, the Karma really needed a rethink, and if the shape had existed as an all-electric car with some of the odd proportions fixed I think it could have been a better proposition.

So here’s the alternate reality to make Matt’s dreams come true. When Fisker went nowhere, a group got together to do a major transformation of the car it into a high performance EV grand touring Cheetah revival. 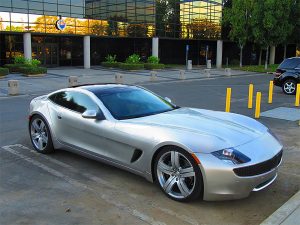 The first step would be to alter the passenger compartment by essentially having the car driven from what was the Karma’s back seat, right over the electric motor. Up front, the enormous hood would cover a giant luggage area, accessible by side opening hoods as on pre-war cars; there really would be no other way to do it since you’d never get a single piece bonnet open. Batteries would be balanced in the center of the car under the luggage space and in the center console area of the passenger compartment to allow for a low floor where the passengers are. 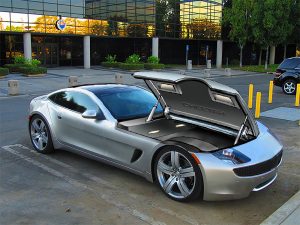 Of course, no trunk lid would be needed; just small cargo space for a briefcase or small bag accessible by folding the seats forwards. You could back this thing into a space in a parking garage and it wouldn’t matter since you would still have access to all of the cargo on board. Of course, getting on the receiving end of a rear end collision would be interesting.

A few more details would be modified from the Karma original.  The front light clusters would be lower profile for a larger luggage opening and visually lower the front of the car. Vents on the flanks of the car to visually break up the vast space.

The Cheetah would be battery only, unlike the hybrid original Karma, which in early 2010s technology would have meant rather limited range, but this is a sports machine like original Tesla roadster so that might not have been as much of an issue. Also, the layout of the batteries primarily under the hood means that changing out the packs in the future to exponentially better units would be relatively easy.

So was Matt crazy? His idea is certainly unconventional, but not without precedent. Ultimately, if nothing else it proves that nearly anything could be done in terms of layouts with EVs, and it’s time to start exploring more of these possibilities with real cars.