A Deathtrap, And A Hearse: 1993 Ford Mustang vs 1979 Cadillac Superior

Good morning Autopians: This is your wake-up call. It’s Monday morning; time to mainline some coffee and get back to pretending to work. But to make the morning go a little easier, I’ve got some weird cheap old cars for you to check out, as always.

On Friday, we looked at a couple of ’50s sedans that were outside our normal price range. Let’s see what you thought of them:

Well, that’s pretty decisive. Price was probably a factor: I’m not sure that Edsel was more than twice as nice as the DeSoto. And the DeSoto is just way cooler.

Today, we’ve got another one of those odd-couple matchups, because there just aren’t comparable vehicles out there for either of these, at least for our hypothetical budget. But in a way, they do go together: if you’re not careful about how you drive one, you’ll end up as a passenger in the other. Let’s take a look. 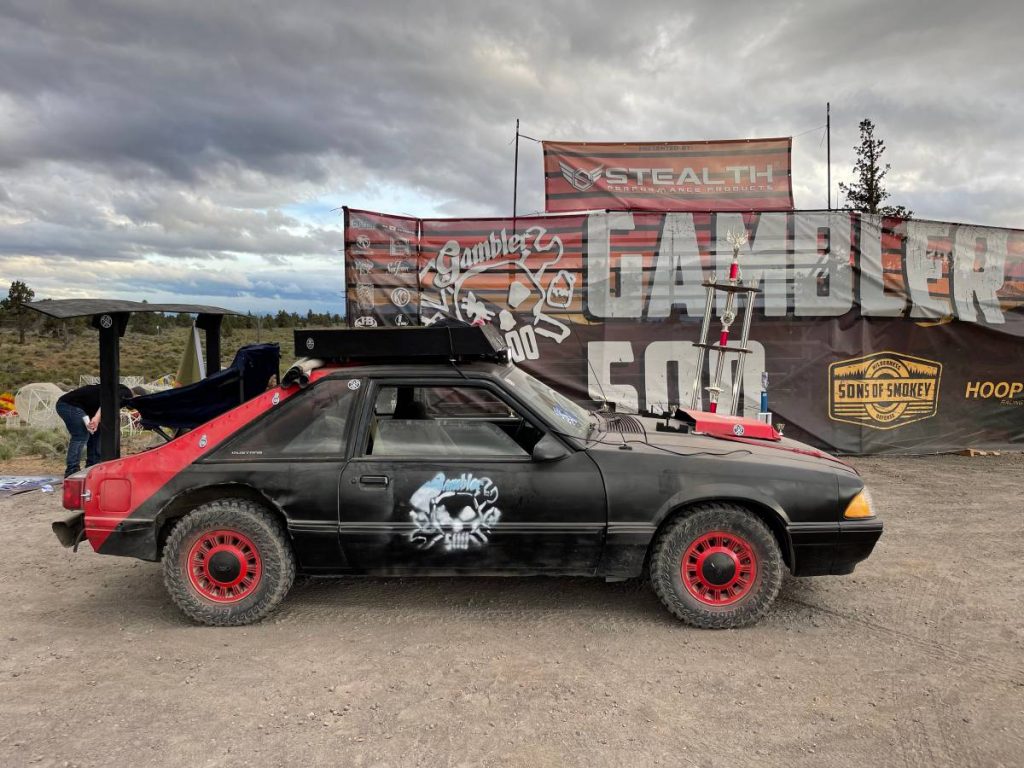 Runs/drives? Like a top, if the seller is to be believed

Off-roading cars that were never meant to be off-roaded is officially a Thing these days. But few can afford to safari-ize a vintage Porsche 911. For those of us of more normal means, including our own Mercedes Streeter, the Gambler 500 series is the answer. Take a cheap old car, do whatever you need to do to hang some big off-road tires off the axles, and go beat the snot out of it on logging roads. Sounds like fun, huh? 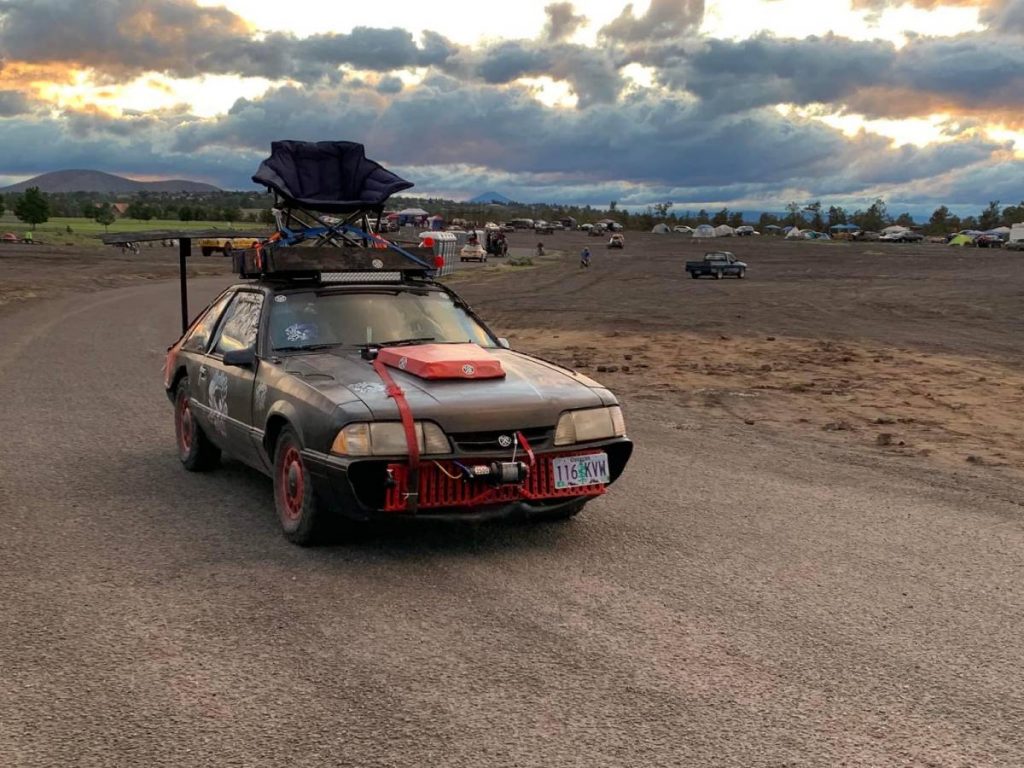 This late Fox-body Mustang would seem to be a logical choice, and from the sounds of it, has been very successful on a couple of outings. It’s a basic four-cylinder LX, but you don’t need a ton of horsepower to slide a rear-wheel-drive car around on dirt. It’s also a manual, which improves not only control, but also durability – important when you’re in the middle of nowhere in a cheap old car. 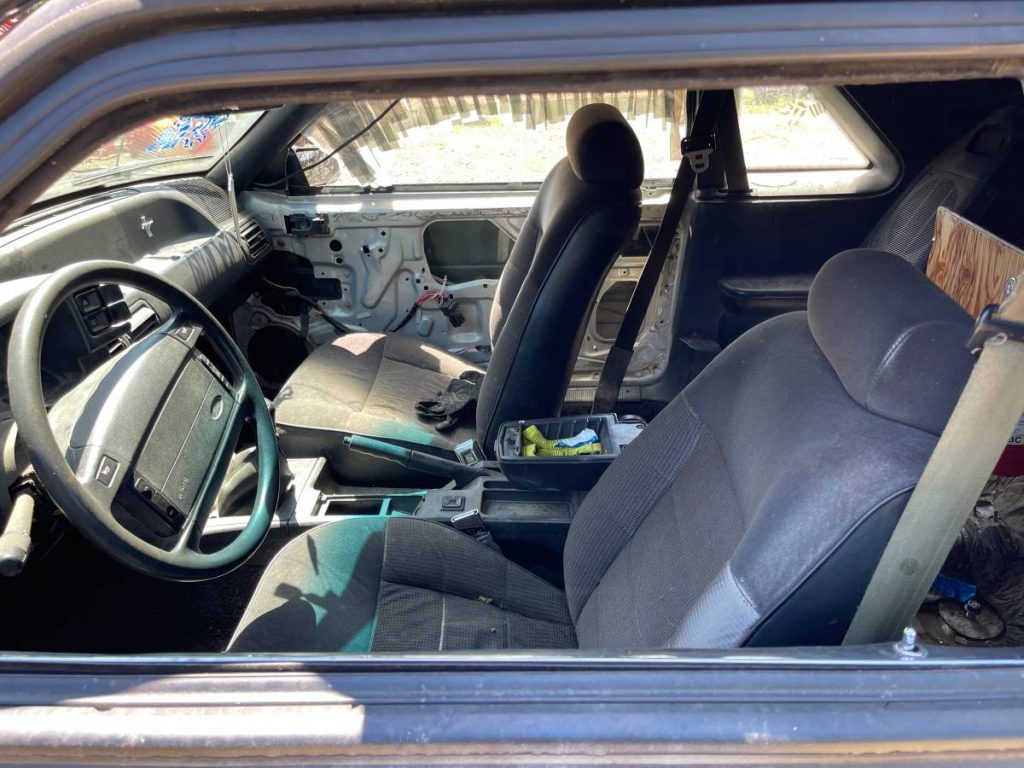 The trouble I have with the whole Gambler 500 phenomenon in general is that it does use up the cars; once you Gambler-ize a car, it’s very difficult to un-Gambler-ize it. In the case of this Mustang, the rear hatch is MIA, the rear fenders and front bumper have been hacked up, and the interior is either trashed or absent. It may run and drive as well as they say, but it’s not really good for anything other than a Gambler event anymore. You could put it back into regular-car service, I suppose, but would you want to? 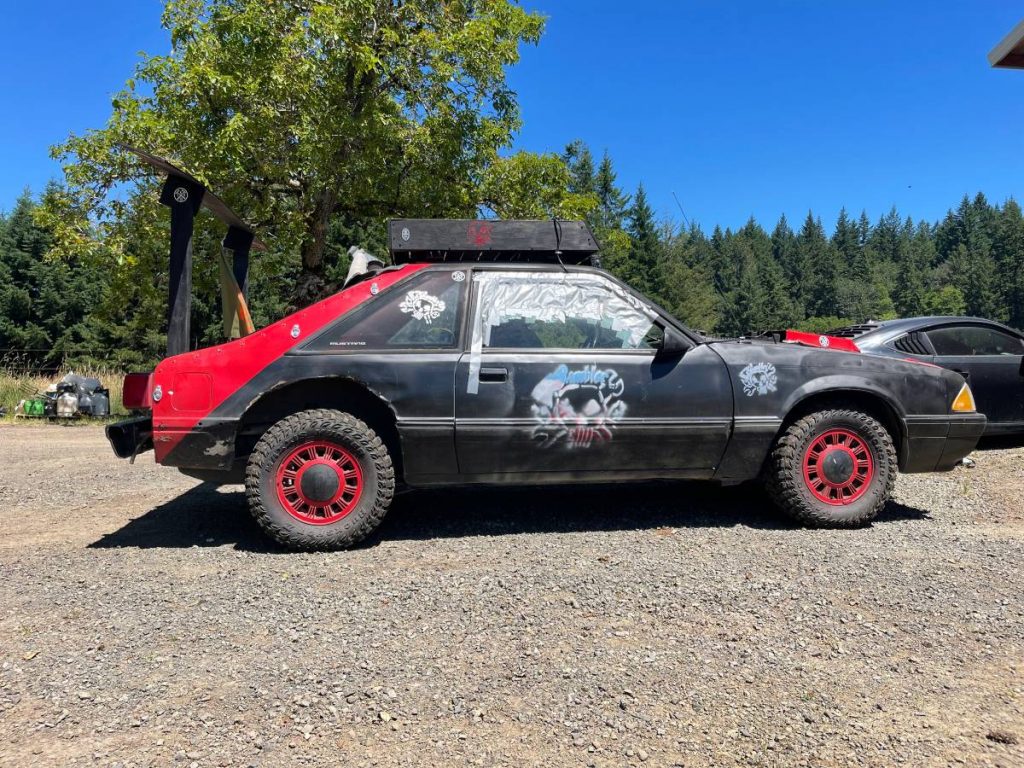 A good-running four-cylinder stickshift Mustang for $1300 sounds like a decent deal, but this one? Well, that’s for you to decide. 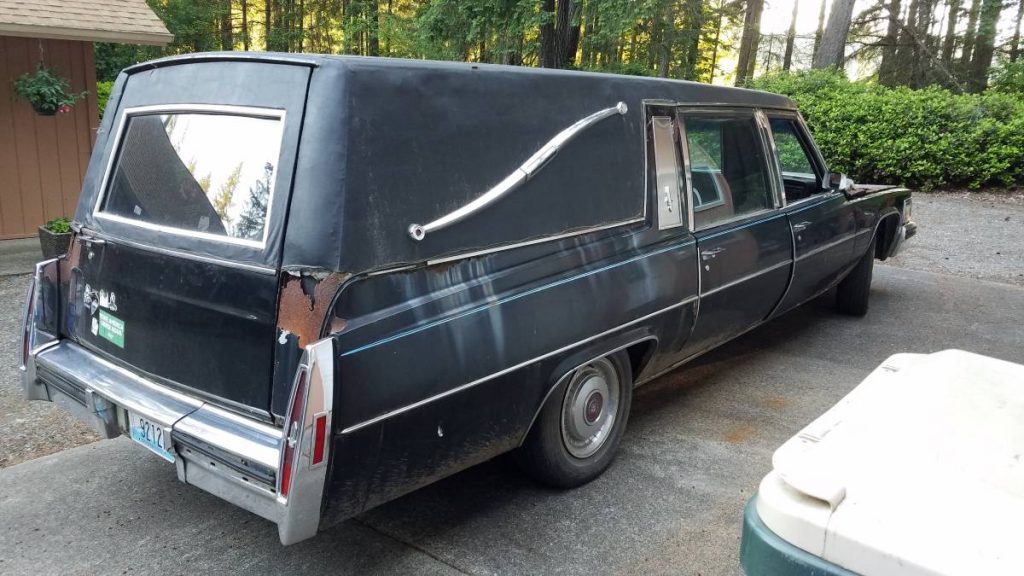 Runs/drives? Great, according to the ad

And now for something completely different. Everybody loves a hearse, right? I mean, folks are just dying to get a ride in one of these bad boys.

Superior Coaches of Lima, Ohio has been turning Cadillacs into hearses for a long time. In 1981, they bought out the S&S Coach Company, who had been building hearses even longer. They’re not the only game in town, but they’re the only one I’ve ever heard of. 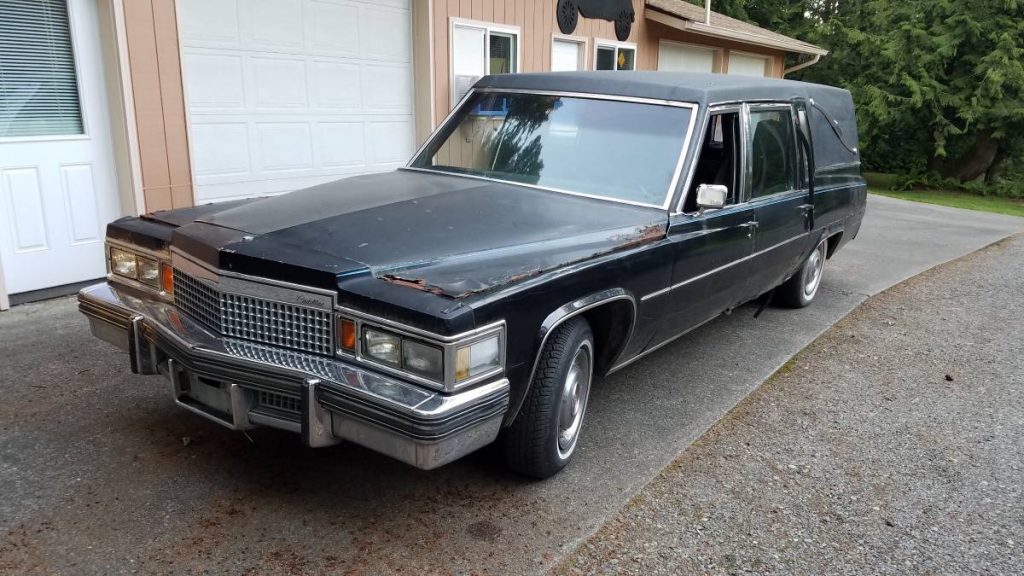 This 1979 model is based on a Cadillac Fleetwood Limousine, which shrank along with the rest of GM’s full-size cars in 1977. Even with the malaise-era downsizing, it’s still an impressively-sized machine, and in hearse form, it’s even bigger. Good luck parallel parking this monster. 1979 was the last year for the massive 425 cubic inch V8 as well, so expect to spend a lot of time at the gas pump. 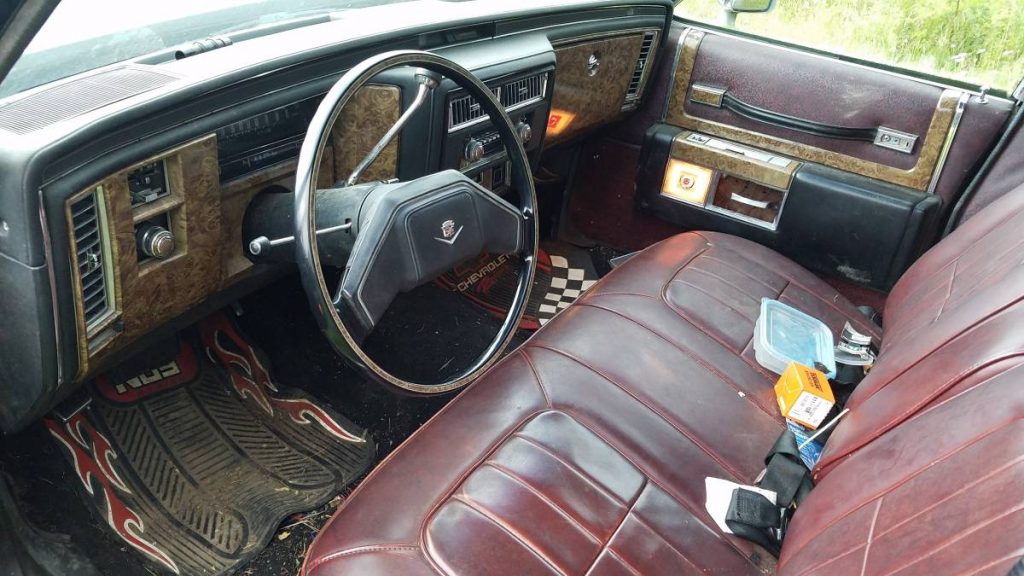 According to the seller, this old Caddy runs and drives well and has had a lot of recent mechanical work done.  Outside, there’s a lot of rust, and not all of it looks benign. It’s probably fixable, but it’s going to take the right kind of buyer to want to try. Although I suppose you could ignore the rust and drive it as-is: Use it in place of a truck or van, maybe? There is an awful lot of room in the back. 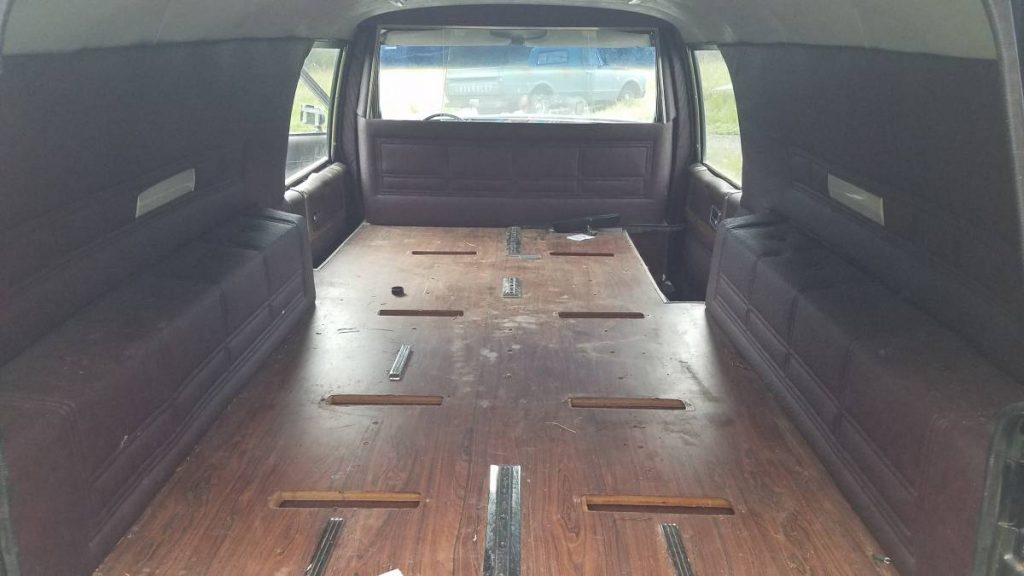 No word on whether this one has an Aiwa stereo in it or not. But it should.

So there they are, our Monday choices. You can Gamble on a badly-abused Mustang, or roll the bones on an old rusty hearse. The choice is yours.