A Look At Small-Town American Car Culture: Ralph, Diane, And The 331,000-Mile Supervan

Ralph and Diane wished they had a nicer car. They came of age in the car-crazed fifties, occupied an honorable, middle class social status as adults, and as things worked out over the years, the two found themselves motoring around Sterling, Kansas in a 2003 Toyota Sienna with 331,000 miles.

Cash flow for octogenarians is a bitch, it turns out. Cars aren’t cheap, especially these days. And while that definitely was a factor in Sterling, Kansas residents Ralph and Diane holding onto their old van, the biggest factor was that the car was just a tank — one that the couple dubbed the “Super Van.” Trading the vehicle’s maladies for a new set of problems in a “nicer” ride just never did compute to them.

As sensible midwesterners with highly-evolved cost-benefit detectors, Ralph and Diane never could justify replacing their mechanical wonder with something more stylish. So, the two — as we all must admit to doing at times, in life as in cars — taped over a chronic check engine light, because as Ralph said, “it’s probably a bad sensor.” And they just kept driving. 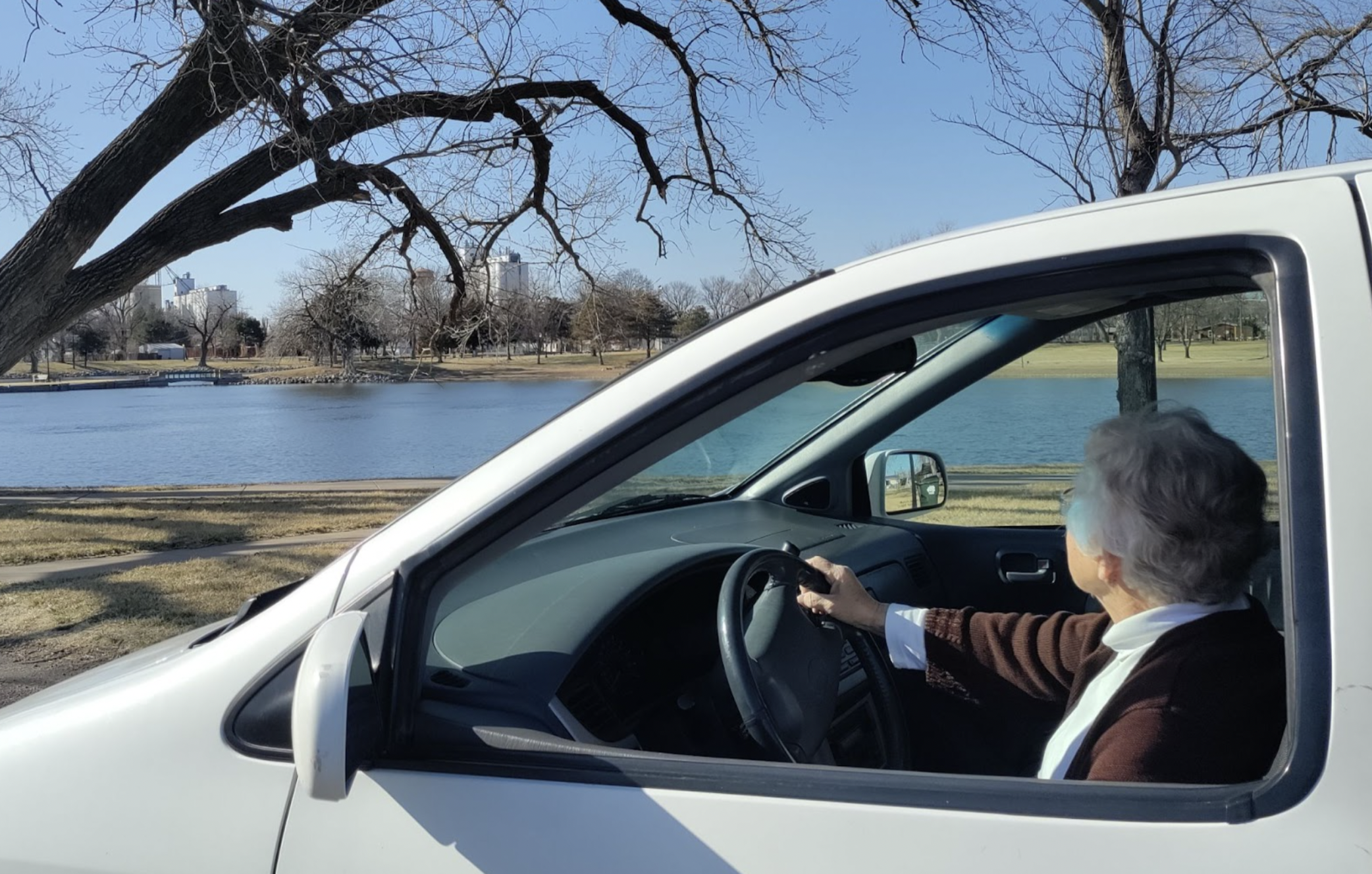 Before I go on, a little about me: I live in Sterling, Kansas, too. I was born and raised here, and I happen to be the youngest son of Ralph and Diane. As for why I’m writing this, well, I believe in observing nuance and highlighting simple-seeming subjects that might otherwise disappear among flashier things. I believe car culture in Sterling offers a unique view of American life. Thank you for reading my car-culture dispatches from the prairie!

[Editor’s note: Hi, its David. I spent much of my childhood in Kansas, so I have a soft spot for it. And I always felt that rural American car culture was underrepresented in mainstream media, so I’ve given Dave here a column to talk about what’s going on in the bustling, 2,600-resident town of Sterling, Kansas. Random, I know. The first story is about his own family, though subsequent pieces will act to broadly uncover car culture in Sterling. -DT]

Anyway, back to Ralph and Diane. Let’s do their car-nology, in order of acquisition:

1992 Mercury Grand Marquis, sort of mauve and back to chrome 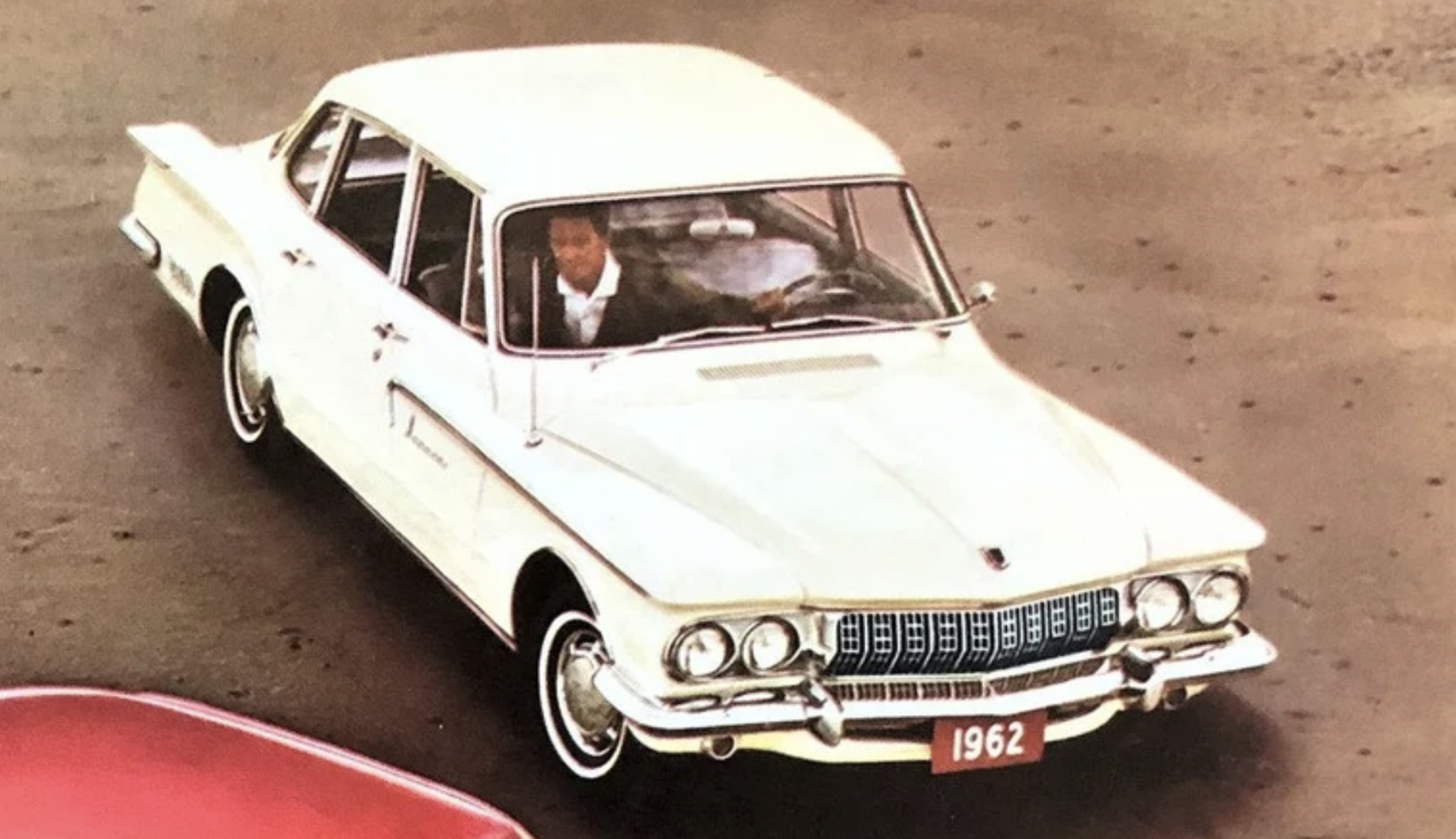 The first new car Ralph and Diane ever acquired was a 1962 Dodge Lancer, which they bought as newlyweds when newly-employed Ralph was earning a steady check teaching high school social studies. This was an A-body Chrysler like the Dodge Dart and David Tracy’s old Plymouth Valiant, and it was one of the two vehicles in which the slant-six “Leaning Tower of Power” debuted for the 1960 model year. It’s a beautiful machine.

A succession of family cars ensued as the couple raised three sons. A 1967 Ford Country Sedan station wagon in bathtub blue, then a 1972 Ford Torino wagon in (decidedly) turd brown. Those cars live on in Super 8 home movies, but they are at best minor characters in the story-telling of Ralph and Diane’s lives as young parents — except for one calamity in the brown wagon. Towing a new camper on a family vacation through Colorado, they nearly didn’t reach the summit of Pitkin Pass.  “No one told me I had to have the carburetor adjusted for altitude,” Ralph explained. “I would rev it up, drive for a few feet, then have to repeat the cycle. It was a narrow road and for a while I thought “‘There’s no way I can back this thing, with a trailer, down the mountain.’’” 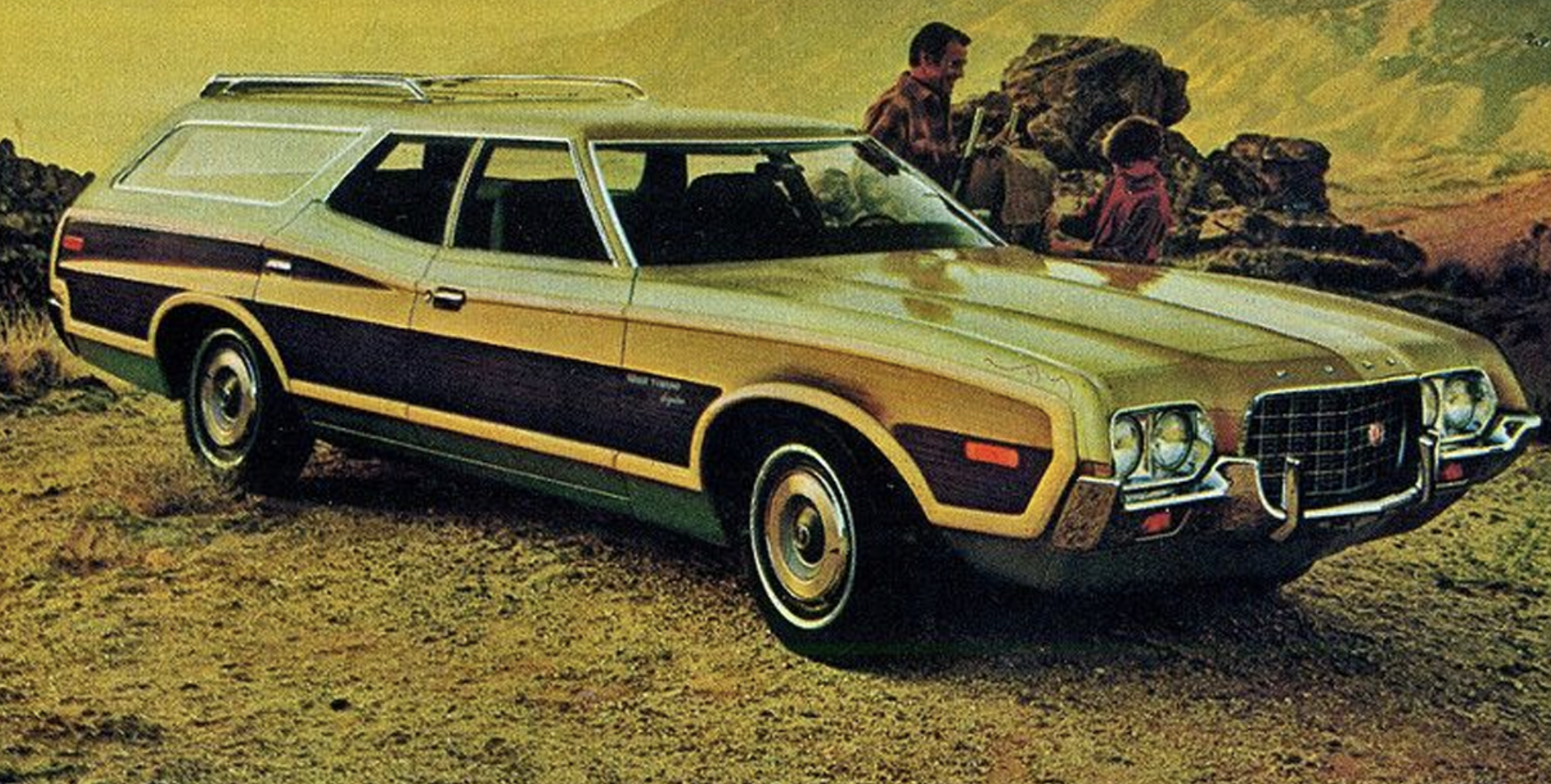 The residual anxiety of a malaise-era, pre-cell-phone, pre-seatbelts, kids-squirreling-around-everywhere car emergency showed up again in Ralph’s face as he described it. But, he explained, he eventually nursed the car to the top and then let gravity guide him back down the other side to a mechanic. 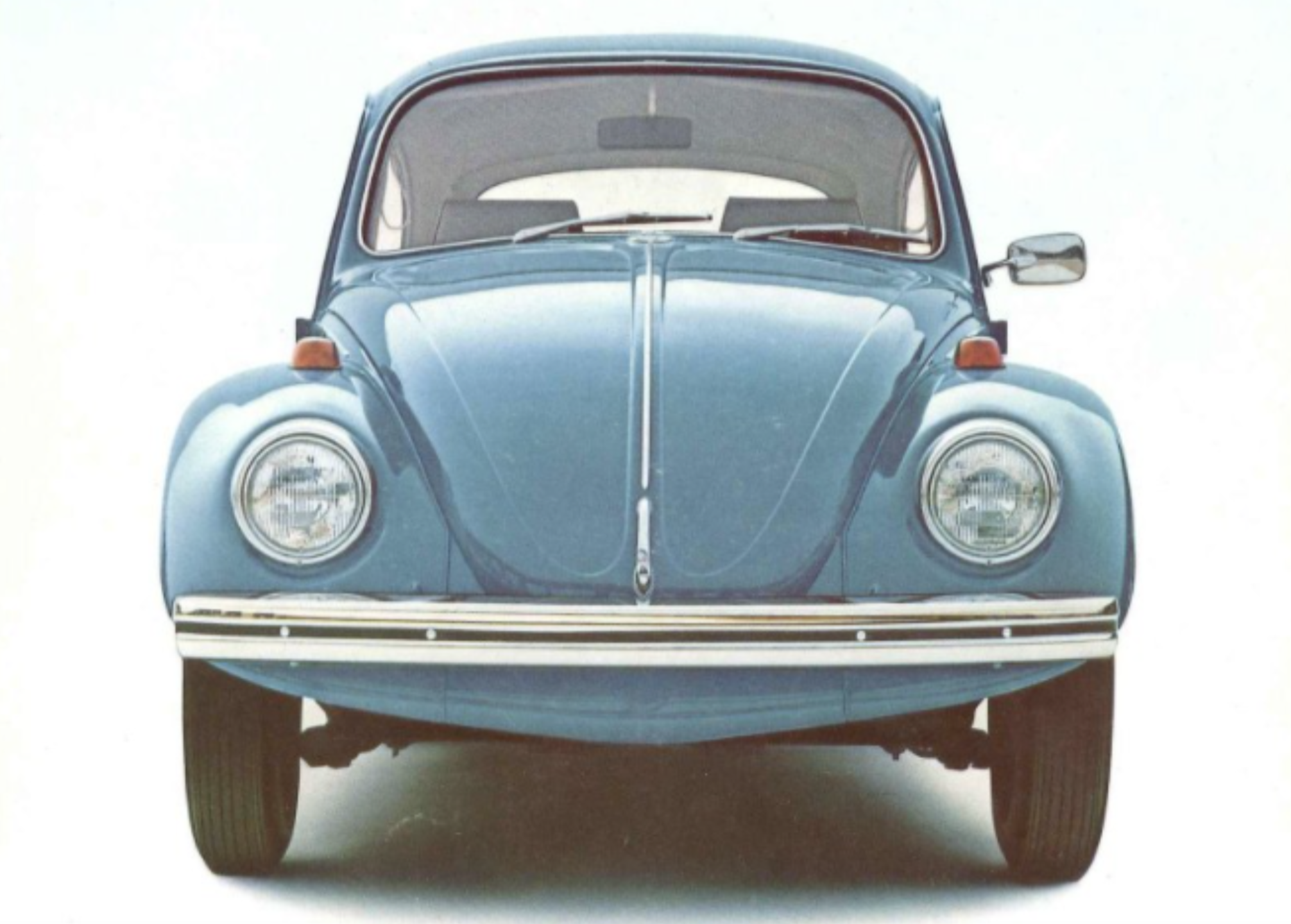 Diane entered nursing school when her two older sons were well-along in school, so the family acquired a 1969 VW Beetle for her to commute to classes 25 miles away. The Beetle remains Diane’s favorite car to this day, and a powerful source of nostalgia. The fun-driving nature of the Beetle combined in her memory with her growing economic independence, intellectual stimulation, and personal growth at the time. “I loved the stick shift,” she said. “And the gas mileage was great.”

In 1982 Ralph and Diane fell victim to a devastating siren clatter — that of the notorious Oldsmobile Diesel. While preparing to take their oldest son to college in D.C. from Kansas, the allure of new-car comfort and gas-crunch-era diesel fuel economy for the long road trip won them over. Ralph described the gray (with navy pinstripes and navy crushed velour interior) Delta 88, as “hands-down the most comfortable car I ever had.”

But all Olds diesels live in infamy, justifiably. The car belched sooty fumes. And the reliability issues of the under-engineered and rushed-to-market Olds manifested in dramatic fashion on that very delivery trip to college.

“Here we were, emotional about taking our son to college, and the car kept breaking down on the way. It was so stressful. We weren’t sure we would get him there on time,”  Ralph explained. “And each mechanic we visited would open the hood, take a quick glance, and say ‘Oh God, it’s a diesel.’”

Ralph unloaded that car, which was — hilariously — just a year old, as soon as he got back from that trip. It was a humiliating defeat, ridiculed with good-natured jest among friends and neighbors, and a lesson in risk versus reward that resonated later.

The next twenty years brought a succession of fairly nondescript people-haulers. The most compelling of these cars was a Mercury Sable, with its European handling, firm seats, and aero styling. But something about the swoopy Sable and Ralph’s and Diane’s station in life by then — prairie fifty-somethings with fellow empty-nesters to haul to social dinners — never really jibed. So the Sable left the stable for larger size and more “comfort.”

All roads eventually led to the Sienna of 2003. Having once owned an Olds diesel, and having endured decades of “buy American” domestic-car dysfunction . . . well, by that time one could say there were trauma-induced ailments in the household that Toyota was well-poised to heal.

Ralph had left the teaching profession early on and became a banker — a loan officer occupying the tense chasm between debtor and creditor for 39 years. He was a middleman trying to satisfy the bank owner and the customer — an incredibly challenging job that, he felt, he did well and with decency.

He always wanted a nicer car than he had at any given time, and his 50s-era adolescent car-crazy fantasies never quite subsided. But in Sterling, Kansas, in general, and more specifically when you lend your boss’s money to friends and neighbors, it’s not great to be ostentatious. The Sienna — acquired new, white with gray leather — occupied its dual role of form and function with incredible effectiveness.

Diane never forgot the independence and empowerment of her little VW bug, but the Super Van, in her evolved situation today and 331,000 miles in, fulfills that mission, too.  Ralph passed away last May, and every day now for Diane is a juggling exercise: self-care, caring for others (for a nurse like her, that’s part of self-care), and living independently–shifting her own gears–for as long as possible.

She’s doing great, and Super Van’s unkillable 3.0-liter V6 helps. Diane is comfortable in the driver’s seat (not unlike *that slooooooooow driving lady in Ferris Bueller* who peers over the dash, barely), commuting less than a mile to her part-time job to earn some spending money and, perhaps more importantly, to feel useful because “they need me,” she says.

The van still looks nice outside. Inside, covers adorn the front seats to conceal cracked leather. The CD player won’t eject the recording of their granddaughter’s a capella group. And an optional running board to help friends with ingress/egress has fallen completely off the driver’s side (the one on the passenger side remains, and according to Ralph:  “It’s okay. No one can see both sides of the car at the same time.”)

That check engine light signals a chronic issue with the exhaust system. A perfectly square patch of electrical tape on the instrument panel obscures it. The car still starts reliably, runs comfortably, and given its advanced age and limited scope of operation, does not warrant either a new catalytic converter or new struts to correct the other chronic issue — suspension fatigue.

My parents and their car were a good match. Ralph and Diane got it right, together, as they got many things right over the years. Although, getting things right is rarely the same thing as getting them the way you want them. A nicer car would be great, sure. But for now a little tape over the Check Engine Light makes more sense.

Read All My Posts »
PrevPrevious$700 Maserati TC or $500 VW Scirocco: Which Coachbuilt Classic Is The Better Deal?
NextThese Are The Cars Those Fearless Ukrainians Drove Straight Through A MinefieldNext