A Look At Small-Town American Car Culture: Scott, His Tesla, And The Tiny College He Runs

At the risk of propagating nagging (but, admittedly pretty accurate) stereotypes of the prairie, it was incredibly windy in Sterling last week. Kudos to the commercial drivers who kept goods and people on the move in high-profile vehicles, fighting the crosswinds all week long, having to spend hours upon hours executing airplane-like slip maneuvers just to keep their trucks moving straight ahead.

Here’s what the wind did to me last Thursday in my Sprinter on the way back from Scranton, Kansas where I bought a set of used tires. These were probably 35-40 mph sustained winds from the north:

[Editor’s note: As I said in the intro article, my goal with this series from the random, small town of Sterling, Kansas is to fill a void I’ve noticed in mainstream automotive media — there’s just not enough written about rural American car culture. The fantastic little nugget above about pulsing wind gusts from the gaps between train cars pushing vehicles around is exactly what I had in mind. It’s just so obscure and great!]

So that wasn’t a fun drive.

It’s a safe bet that anytime molecules move that fast from one place to another, we’ll throw little molecule-yokes on them and make them do work. Here’s a pie graph I screenshotted as soon as I got back, from Southwest Power Pool (spp.org). 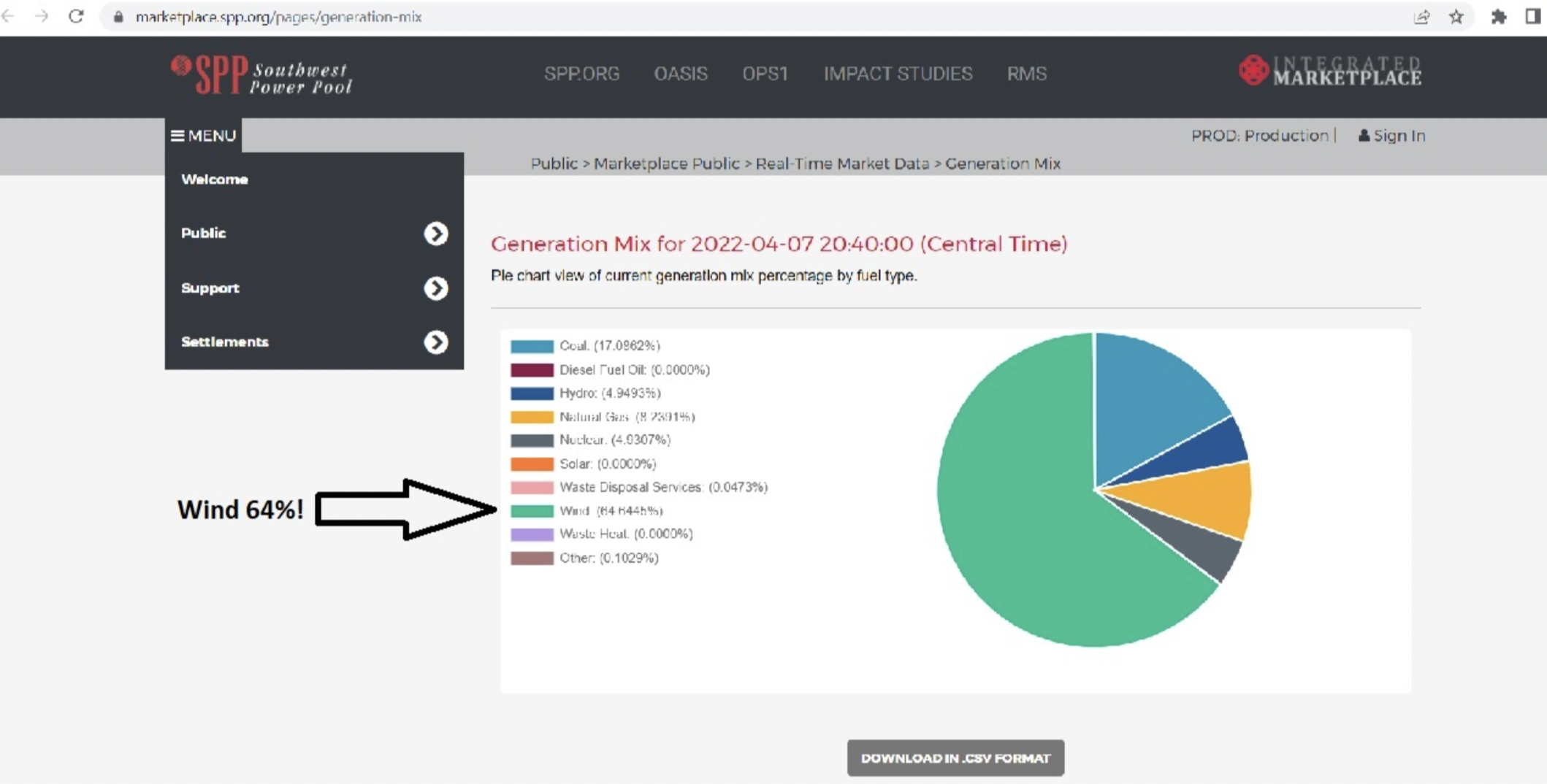 I get it, it’s self-evident that the wind won’t blow all the time (among other reservations about wind generation), but last week it sure did! I could do with less wind for a few days, but I’m starting to get psyched about spring storms. Towering anvil clouds do for me what taillight lenses do for Jason Torchinsky!

Scott, Tesla, and the Cars of our College

Tesla has sold over a million cars in the USA. Accounting for collision losses and the occasional Roadster placed into solar orbit, the numbers suggest that there is one Tesla out there for every 350 people in the USA.

In Sterling, where if Tesla penetrated the market evenly we’d expect about seven Teslas, there is but one. A Model Y with dual motors and a black interior, the car belongs to Scott, the president of Sterling College (SC), our flagship cultural and economic institution.

A quick mental exercise before we go on: Which of the following words best represents your first “gut” reaction to the vehicle I just described? Which embodies your first reaction towards college CEOs? And which term works as your knee-jerk thought about a college CEO driving a Tesla?

If you drive in America, cars are a form of expression. Even appliance-drivers express themselves. To paraphrase the GREAT rock band Rush: If you choose not to express yourself automotively, you still have made an automotive self-expression.

For a locally-prominent leader like Scott, the consequences of self-expression intensify and dissipate more slowly than they might for someone in a less visible position. This is a small town, and the fact is that the way we exchange information — even through just pleasant discussions about our well-being — with essentially the same group of people we see several times a week (some of whom care about us, some who really don’t) adds risk to one’s choices of expression. Around here, other people, what they think, and what one thinks they think, tend to get inside one’s head and rattle around.

Welcome to our small town, where we’re only self-conscious because everybody is looking at us.

For a fifty-something, Scott’s car-nology is pretty long. Here’s what he’s owned:

The customary car-taste patterns that I tend to see among locals Scott’s age emerge, here: youthful speed-worship, commencement of child-rearing, and eventually curating a complementary, binary fleet (Chrysler 300/Ford F250, etc.) to manage the contradictory needs of family, economy, and hauling. Scott’s impressions of his car-nology today generally organize around issues of reliability: the Toyotas were good cars; the Chrysler and ESPECIALLY the Alfa Romeo were bad. I know, I bet you’re all surprised.

The college president told me that for his car decisions, issues of identity or style were–and are today, including with the Tesla–subordinate to function. For example, Scott must manage a perennially tight budget for Sterling College business travel, and the Tesla is just cheaper to operate than anything else on the road.

But many of SC’s alumni donors, who need to be visited and courted, live in southwest Kansas, and Tesla’s charging network doesn’t live in southwest Kansas. So, is that Tesla really about sensibility? And wait, isn’t there an Alfa Romeo in Scott’s background? Bold, good-looking, and exciting cars clearly appeal to Scott, but this is a small town, and Scott has an extremely important, public-facing job, so it’s no surprise he emphasizes one truth (sensible) over another (sexy).

Most Sterling College alumni and employees are undoubtedly proud of Scott–and they should be–for multiple reasons, including his long track record of competence in a hard job.

CEOs and academics aren’t the most beloved figures these days, but if the image of Scott sitting in an ivory tower on the plains comes to your mind, you might need to visit us to set that idea straight. Sterling College is a grittier, more textured and complex place. If you are a resident of Sterling, you might see SC as our central nervous system–as SC cycles through periods of stability or distress, so go the rest of our institutions. Or, you might see it as an earnest and spirit-filled Christian college churning out preachers and teachers every year to serve up a gospel influence in a lost world. Or you might see rank hypocrisy in the beer-can empties lining the ditches near the dorms. Or you might be baffled and indignant when the homecoming musical is either censored, or not censored, in any way contrary to your own very specific cultural and religious sensibilities.

It’s for these reasons that Scott’s job is so tough. He’s in charge of a place where the contradictory, triple standards of business, ministry, and higher-ed frequently clash, and he has to somehow make it work.

Indeed, I have observed that some of our people here fall into a judgmental If-he’s-driving-that,-Sterling-College-doesn’t-need-my-donation mode of thinking, although they’d be unlikely to ever say so directly to Scott’s face, because that might seem disagreeable.

Ultimately, no one, including Scott, likes to be told (i.e., murmured and small-talked) what to do.  He wanted a Tesla, and it made some sense, and it was exciting too, so he got one. Cars bring Scott joy, and most of us Autopians can relate.

Residents Roll Their Eyes at The Students’ Cars, but Pray Those Kids Stick Around

The students at Sterling College–about 600 in total–drive all sorts of cars. Take every visual image you may have absorbed from popular culture of prairie towns–Norman Rockwell, Smallville, Field of Dreams, whatever—and lay over top of that image a soundtrack of thumping bass, straight-pipes, and failing CV joints turning sharply and too fast on marginal tires. These loud noises in particular identify us as a college town. We also have the subtle backing track of affordable appliance-cars idling in harmony to warm up before a mid-February 7:50 class across campus. And we have occasional resting measures of modern hybrids and start-stops waiting at our stop light (yes, singular stop light). It is a choir of sorts, and you can hear all of it within one square mile.

Youngsters in their jalopies, ragged last-gen pony cars with exactly one can’s worth of primer gray, coal-rolling bro-dozers, and the OCCASIONAL spotless and mint-condition GTI (I’m looking at you, Chandler!) give our town something that most little prairie burgs covet–YOUTH, vitality and a chance (you’re saying there’s a chance!) that they will stick around, maybe even settle and reproduce.

Like wary birds down low within the prairie grasses, SC students are heard before they are seen.

They aren’t just any young people, they are our future, and the automotive sounds of their attention-craving, undeveloped prefrontal cortexes have an effect not unlike our own children crying at night out of hunger or a scary dream. Exasperating? Sure, at times, but when you’re in serene Sterling and you hear that fart-canned Honda, ATTENTION MUST BE PAID. And that’s a good thing.

The Sterling College faculty and staff–with Scott in the lead–wrap caring arms around our students and nurture them as long as the students will let us. The community in general does its part too, providing places to do laundry and plates of cookies and going to all the games and shows. The relationships that develop here, with relatively little to distract from familiarity that grows into intimacy between humans, tend to be healthy and enduring.

They’re young. They don’t want to be told what to do. We’ll roll our eyes plenty, but heaven forbid they, and their cars, ever go away. There’s not much else unpleasant to listen to here, so we can take it. Maybe, when that prefrontal cortex fills out, they’ll think about hanging around, having some kids themselves, and putting them in car seats. In a Buick Enclave.

The buttoned-down college CEO undersells his automotive self-expression. His tatted and studded and green-haired students oversell theirs.

In a sense, humans have been seeking a place where they can express themselves comfortably, probably forever. In one narrative, people crossed an ocean, established a frontier, and kept pushing that frontier further west seeking that place where they could exist without judgmental oversight.

It begs the question: Where is our frontier of self-expression now? Is it in metro areas, where concentrated population dissolves individual expression into a vat of indifferent anonymity? Or is it a prairie town where ATTENTION MUST BE PAID?

While it might seem exhausting and overwrought, I like that we have so much interaction and so many ways to exchange information about our condition at any given time–even if it’s unintentional, and even if we’d sometimes rather not.

The less Scott feels conspicuous and judged for driving a Tesla, the more likely he will stick around and do a hard job well for kids who themselves–let’s face it–embody an opportunity we cannot afford to squander. I am glad Scott is here. I’m glad he drives that Y. I want what he wants.

Read All My Posts »
PrevPreviousInternational House Of Projects: Which Sweet Euro Treat Would You Sink Your Teeth Into?
NextThe 2023 Nissan Pathfinder Rock Creek’s 5/8-Inch Lift Kit Will Make You The Toughest Dad At Arby’sNext