Another new travel trailer is hitting the market, and the builder of this one seeks to solve the problem of campers that fall apart too soon. Never Summer Industries, a company known for its handmade snowboards, has decided to join the hot RV market with its Skyview Campers. These little trailers are built to last long and feature something that you won’t see often in RVs: a design inspired by Frank Lloyd Wright architecture. Let’s check them out!

The RV market has been sizzling hot lately. In what seems to be somewhat of a culture shift, Americans that may have stayed in resorts are now hitting the road with some sort of camper. Some new ideas appear to be sprouting out of this shift, from new camper van concepts to the return of fabulous fiberglass campers. Now, there’s another entry into the space, and it comes from an unexpected source, a company that builds snowboards.

Never Summer Industries launched in 1991 by brothers Tim and Tracey Canaday. When they started the business, the pair loved making snowboards so much that they decided to take on big names in the sport like Burton. But it wasn’t always like that, and as Family Business Magazine wrote in a profile on the company, the brothers found inspiration from a popular summer sport.

The Colorado native brothers visited cousins out in Bakersfield, California. There, Never Summer co-founder Tracey Canaday says that he got an interest in surfing. There was no chance to surf at home, but the Canaday brothers did ski. In 1983, Tracey discovered what he thought to be the next best thing to surfing, snowboarding. A friend took Tracey snowboarding for the first time and he was hooked. Tracey then took his brother, Tim, snowboarding and got him hooked on it, too.

The brothers learned the sport on old, beaten up Burton boards and came to the conclusion that they could build a better board. They opened up Swift Snowboards that year, and the teenage brothers started building their own snowboards. That business failed in 1986 as snowboarding wasn’t quite popular just yet, but the sport’s explosion in subsequent years convinced them to give it another go. Today, Never Summer is still going after over 31 years. 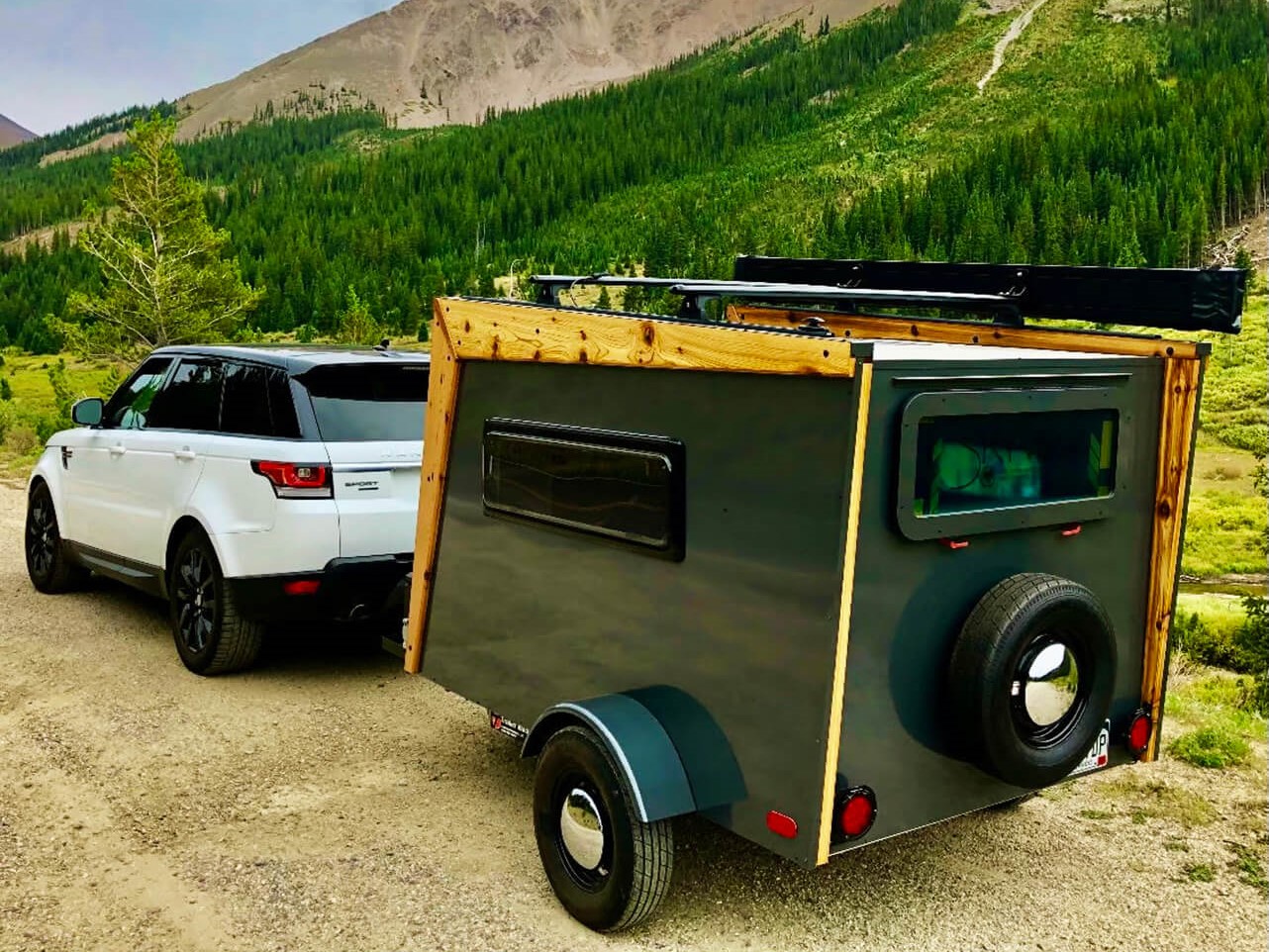 Despite the company’s name, Never Summer has expanded outside of winter sports. Over the years, Never Summer’s products expanded to include longboards, wakeboards, and even a clothing line. Now, the company is taking it a step further by making a camper infused with co-founder Tracey Canaday’s love of Frank Lloyd Wright architecture.

As Gear Junkie writes, Tracey says that these campers take their inspiration from the famed architect’s Taliesin West, Wright’s 1937 winter home and Arizona desert laboratory. You can see a little bit of Taliesin West in the Skyview’s big wooden fins, which resemble beams on the Wright property. A lifelong fan of Wright’s work, Tracey says that he designed it himself, and that he’s interested in doing only this design. 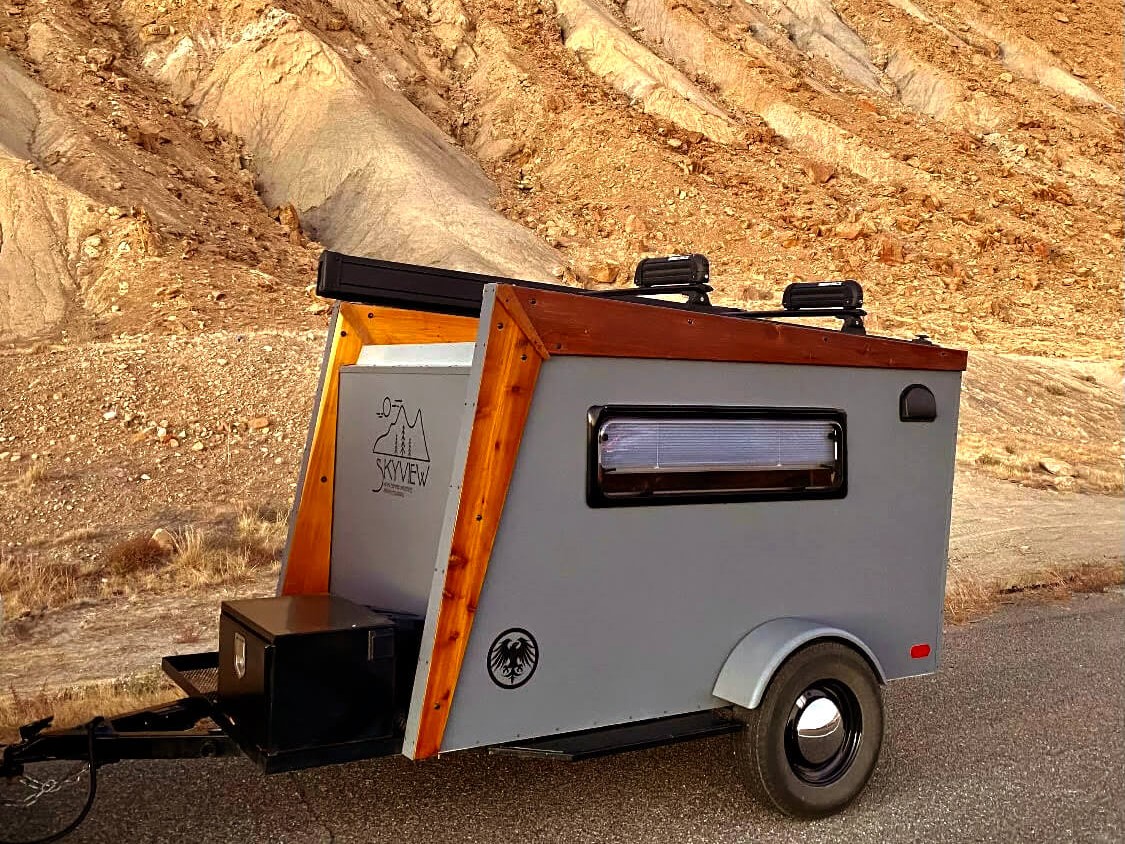 Those fins are said to be oil treated western red cedar, and they’re bolted to .040-inch powder coated 5052 aluminum. Pop open the door and there’s another surprise. Tracey kept the mid-century modern architecture theme going inside, where you’re greeted to a minimalist wood interior. The cabin is made out of bonded and screw-fastened three-quarter-inch marine-grade baltic birch. Baltic birch also makes up the interior shelves. Despite appearances, the floor isn’t wood, but vinyl that looks like wood.

Insulation is taken care of with 2.5-inch insulation in the roof, front wall, and floor. Never Summer says that there’s enough room for two in there thanks to the futon that converts into a bed. And if you want to stargaze before you fall asleep, an opening skylight is on the roof. 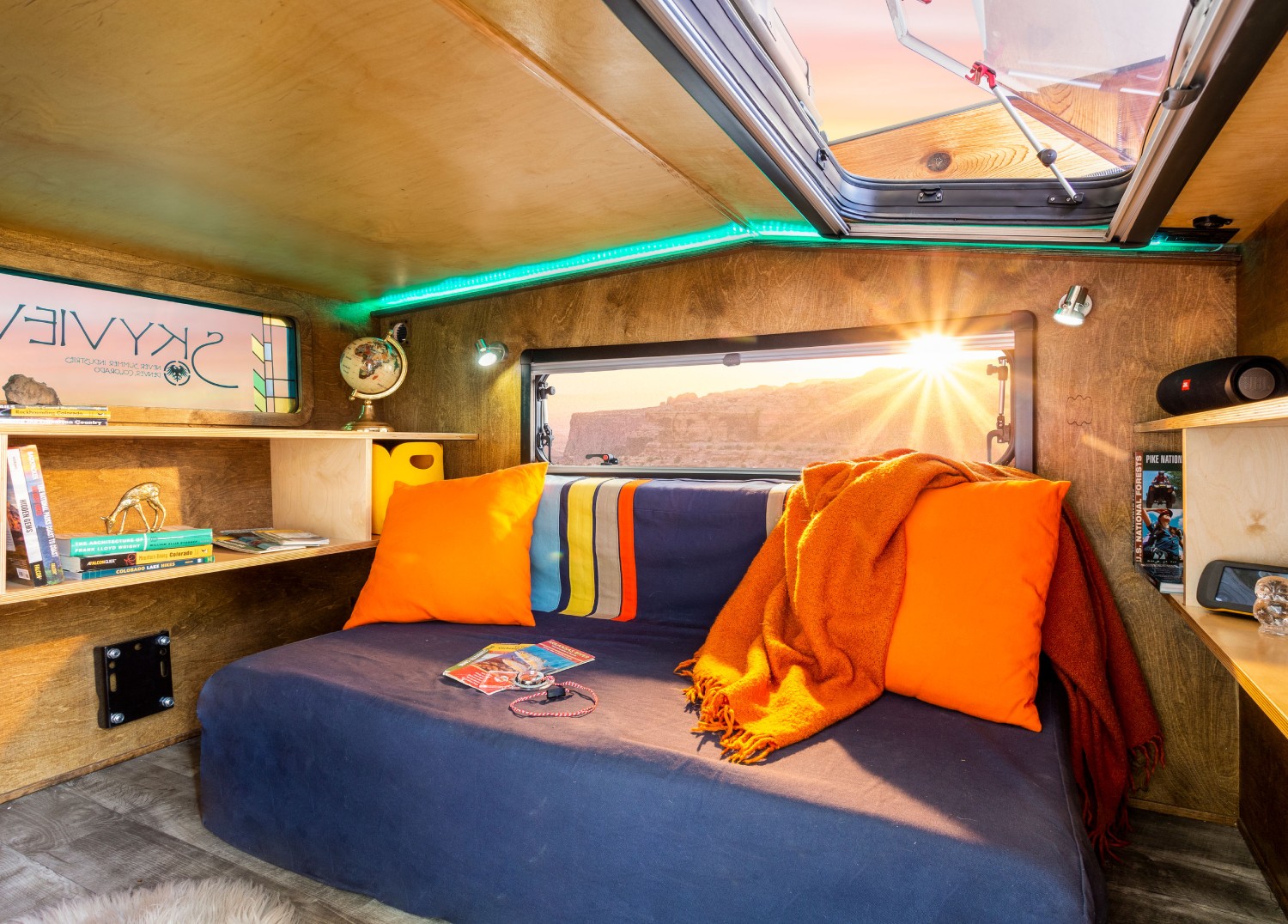 There isn’t much to this interior and what you see is what you get. This is intentional. Never Summer says that the point about this camper is to be different than the campers coming out of Indiana. Its campers are built in the same Colorado factory that builds Never Summer snowboards. And the campers are intentionally minimalist. They’re built around the idea that if there are few things to break, then the camper should last a long time.

The campers come with a few additional neat features. There’s a 200-Watt solar panel, a heated outdoor shower, and an outdoor kitchen unit. You even get a roof rack so you can take extra gear or stuff like bicycles or snowboards with you. Never Summer says that this isn’t just a fair weather camper, either. The company offers an optional package to equip the camper with a heater, air-conditioner, and dehumidifier unit that should allow you to camp in all seasons. It seems, then, that the only thing you’re missing is a toilet, and there are aftermarket solutions for that. That said, interior height is limited at just four feet tall. 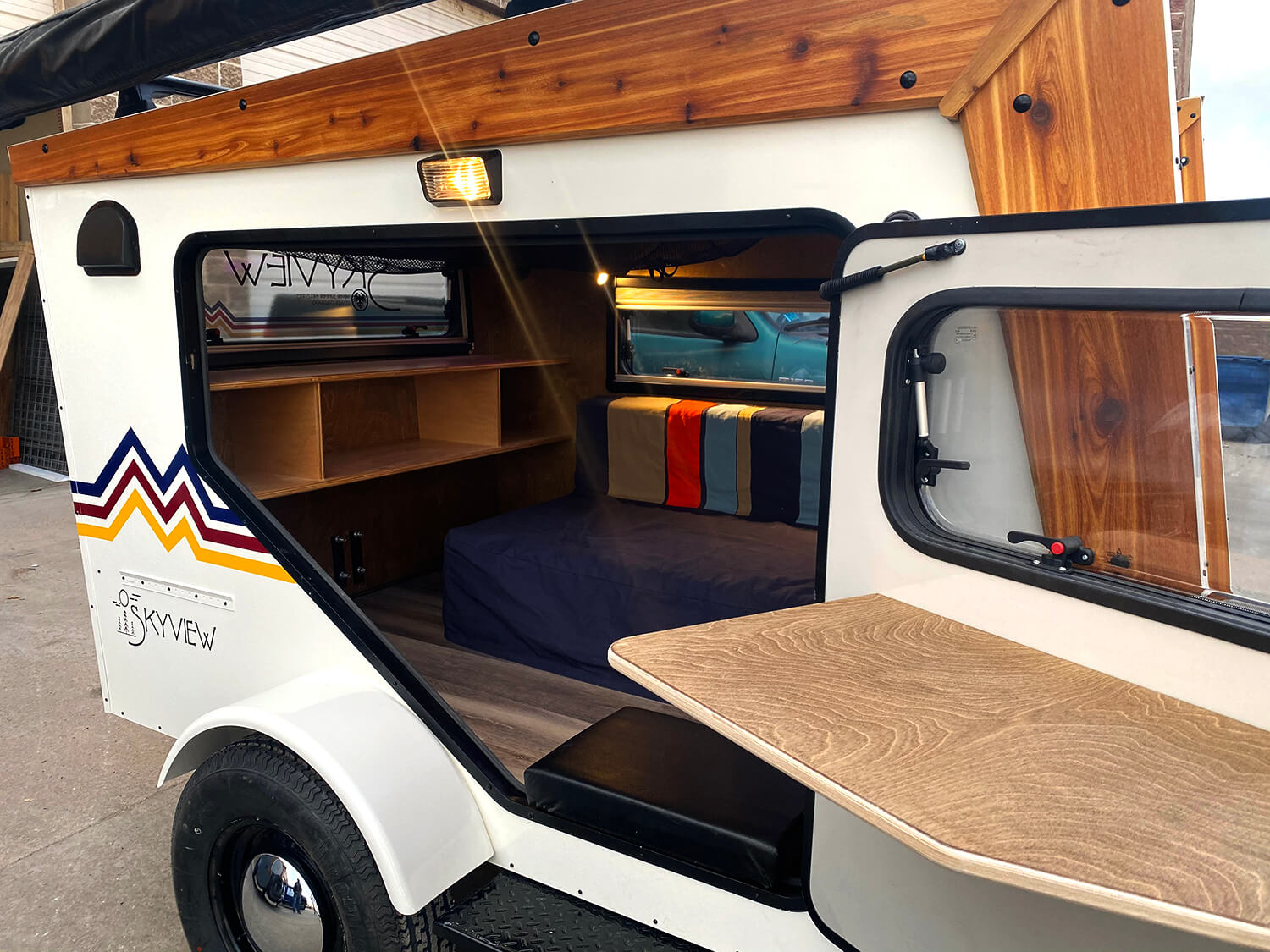 The Skyview Camper starts at $24,900. Never Summer doesn’t offer a list of layouts. And there’s just a single option, the Four Season Package (which adds the aforementioned HVAC system) for $999. It comes in at just 1,500 pounds dry, so this is another camper that just about any car can tow!

The company says that if you order one, the wait will be four to six weeks. Of course, that’s because each one is built by hand. For me, the coolest part about the camper is the design. I’d love to see more campers adopt mid-century modern design. Heck, I’d probably go absolutely nuts for a modern art deco camper.

Mercedes is a lifelong fan of all things powered by an engine. When she isn't driving one of her five Smart Fortwos or her 14 other vehicles she could be found in the cockpit of a Cessna 172 or perhaps swimming in any body of water that she could find. She also has a deep love for buses of all kinds. Please send her buses. mercedes@theautopian.com Instagram: @mistymotors Twitter: @Miss_Mercedes30 Facebook.com/neonspinnazz
Read All My Posts »
PrevPreviousWhy Truckers Used To Pour Alcohol Into Their Brake Systems
NextThe Mazda CX-30 Is A Good Car With An Annoying User Interface That Convinced Me That All Infotainment Screens Should Be TouchscreensNext