In the universe we currently inhabit — the one in which Facebook is re-launching Second Life under a dumb name, Russia invaded Ukraine just to be dicks, and Taco Bell is bringing back the Mexican Pizza — AMC, the American Motors Corporation, is long gone, and we can trace its death all the way back to 1987. That’s when Chrysler bought out Renault’s 46.1% share of the smallest American automaker as well as the remaining shares owned by the public, turning AMC into the Jeep-Eagle division of Chrysler. But what if that’s not how history had unfolded? Imagine with me, if you will, a glorious alternate universe in which AMC did not die, and in which Renault’s support kept the company going well enough to survive independently into the 1980s without the hungry eyes of Lee Iacocca staring it down. Can you imagine what the company’s post-1987 lineup have been like? Well, good news, you don’t have to, because yet again The Autopian has you covered.

This time, though, it isn’t me coming up with inane “what-if” ideas for you to consider; this time my longtime car-researcher friend, who we only know as the Bishop of Automotive Arcana, has provided for us some fascinating speculative drawings and ideas about what 1980s-era Chrysler-free AMC may have been like. It’s worth noting here that the Bishop has an actual, important-person job, so would prefer to remain anonymous, and that back in the late 1980s he attended the Center for Creative Studies in Detroit, training to be an auto designer.

In fact, our AMC-speculator informed me that his dorm parking spot was “next to Ralph Gilles’s rusty Scirocco,” and yes, that’s the Ralph Gilles who headed the team that designed the SRT Viper and saved some lies three years ago, among other notable accolades. So, while all of this may be absurd speculation, it’s absurd speculation from someone with some real training, and in the era that’s being speculated about.

It’s also why these illustrations look so damn good.

So, let’s get started by looking at this alternate universe’s AMC lineup, which is pretty heavily influenced by Renault, much in the same way the legendary Jeep XJ Cherokee was.

[Editor’s note: AMC had a 1987 lineup, and we have a good idea what the company’s late-1980s offerings would have been had it continued independently, so despite it saying “1987” on the fake brochure below, I see these cars really what one might have expected from 1990s-era AMC — an era that this world was unfortunately never able to witness. -DT]

[Another Editor’s note: The Bishop reached out to clarify a few things about this alternate universe:

-When I say 1987 AMC, I was referring to an AMC that would have existed had Chrysler NOT gotten the loan guarantees in 1980.  So there would only be a big 2, and a much bigger market share and more business for AMC to hopefully be able to increase market share and have such a lineup by 1987 instead of the stragglers they had to work with.

-The trucks shown are NOT related to the alternate universe Eagle…they would be based on a new modular platform for full sized trucks to replace the 25 year old (at that time) SJ and that would have competed with Ford and GM examples (again, Dodge/Ram would have ceased to exist in 1980). ]

Holy crap, right? This guy’s not messing around when it comes to his AMC speculations. Look at that dealership design! It’s fantastic? Want more details, like a floorplan? Of course you do – in case you get sucked into a wormhole, you’ll want to have this handy so you can get rich selling AMCs: 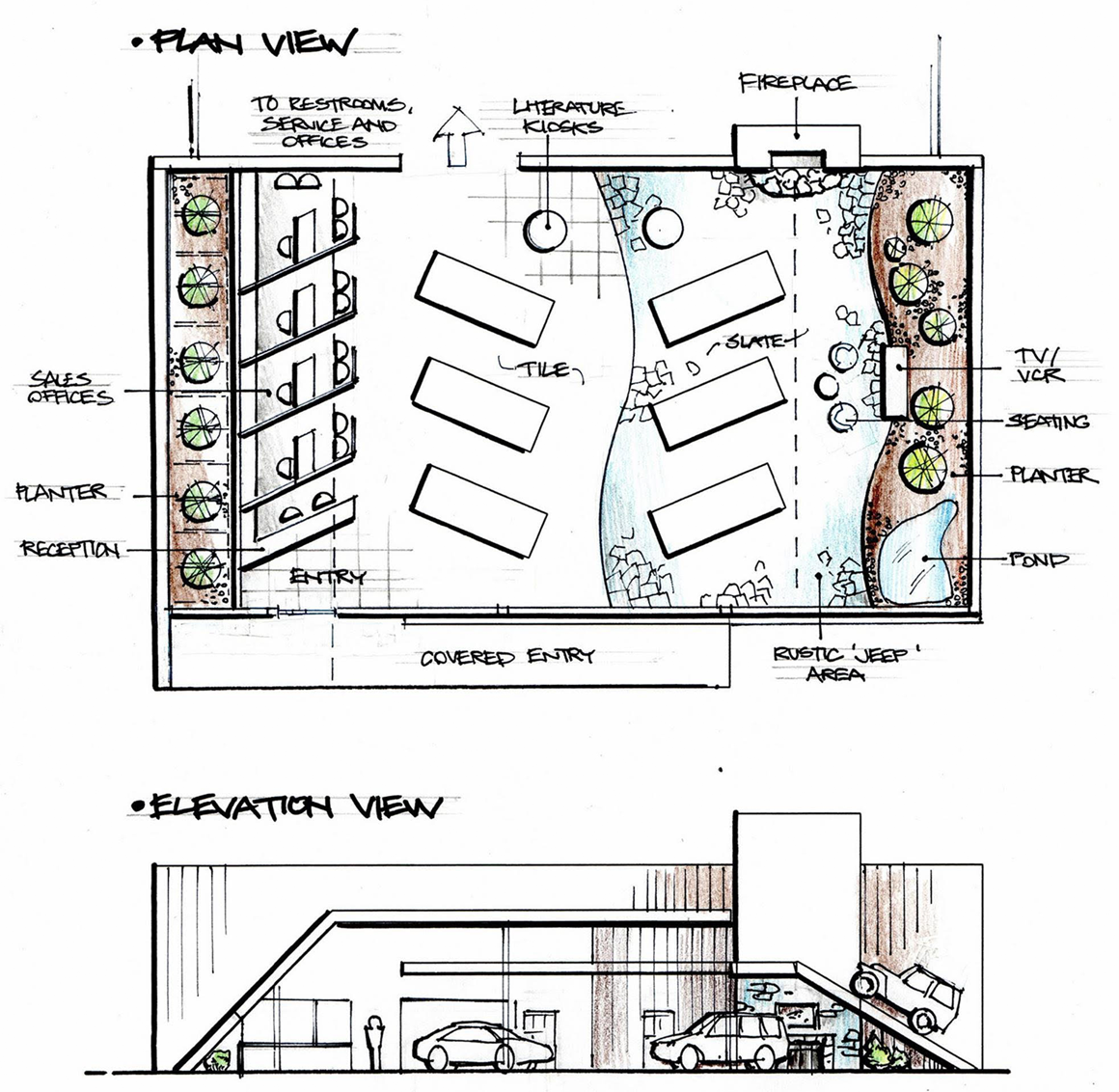 Yeah, that’s amazing. I love the “rustic Jeep” area and the angled roof paved with stones to display a climbing car.

Okay, let’s dig a bit more into this AMC lineup. Happily, the Bishop has provided us with a handy spreadsheet of AMC models, along with their closest competitors:

This is a bold lineup! It’s leveraging AMC’s extensive AWD drivetrain experience, providing more refined off-road or bad weather-capable vehicles for people who don’t want a hardcore Jeep (which exists as a separate, AMC-owned brand in this timeline, too). In a lot of ways, this feels like what AMC could have grown into from its early 1980s AMC Eagle/Spirit era, where the old Hornet platform was already transforming into AWD wagons and sedans.

Renault’s influence is very notable here, with some Renault engines and even whole vehicle brand engineering, as in the case of the SpaceVan, based on the Renault Espace, the revolutionary minivan/people-mover Renault introduced in 1984. Let’s take a quick look at each of these cars, one by one.

Let’s Look At These Cars

These seem to be this AMC’s real volume car, said to compete with the Corsica and Tempo, though I could see it taking on imports like the Accord and small wagons like the Civic 4WD wagon and the Toyota Tercel 4WD wagon. They’re very sleek, pop-up light ’80s designs, and that coupé version feels a bit like a Mitsubishi Eclipse, which was sort of an AMC in our world when it was sold as an Eagle Talon. That 16V engine was likely the Renault 1.8-liter engine used on the Renault 19, if I had to guess, which I probably don’t.

What I like about this one is that you can clearly see ’80s versions of AMC designer Dick Teague’s styling, and while the copy references the Gremlin, I see a bit more Pacer in there, especially in the front end treatment. An Escort competitor domestically, but I bet it would be cross-shopped against VW Golfs and Civics and Tercels, too.

Possibly the closest here to earlier AMCs, this Eagle does feel like an updated version of the AMC Eagle we know: a ruggedized 4WD wagon, with more creature comforts and car-like design than a jeep, but quite capable. I like the agressive integrated bull-bar grille and the updated AMC flap-like Class 10 door handles. I think these could have competed with 4WD Subaru wagons pretty well.

This platform mentioned here, the EX Platform, gets a bit more speculative development from the Bishop, including this pickup truck variant known as the Honcho, which would have been sold as a Jeep: 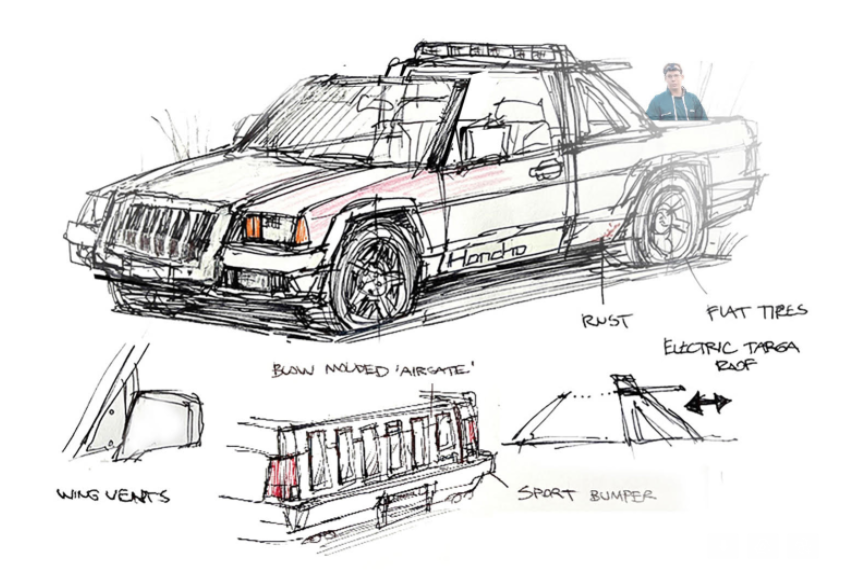 This particular one is drawn from the perspective of being owned by an alternate universe David Tracy, in an alternate 2022, hence the flat tires and rust. 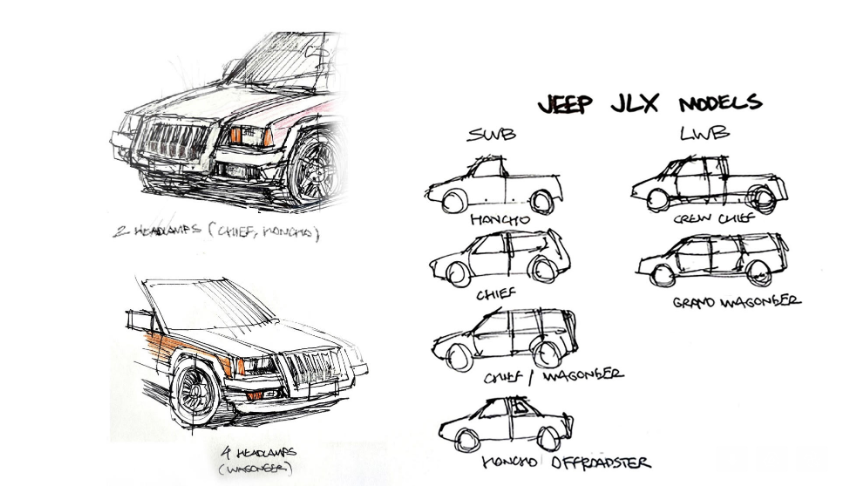 The platform would have been developed into a lot of body styles, including a Cherokee-replacing Chief model and an upmarket Wagoneer version, which got an extra set of headlights, just like the XJ Wagoneers did in our reality.

Just to show you how deep down this hole the Bishop went, he included drawings of the JLX platform’s modular dash designs: 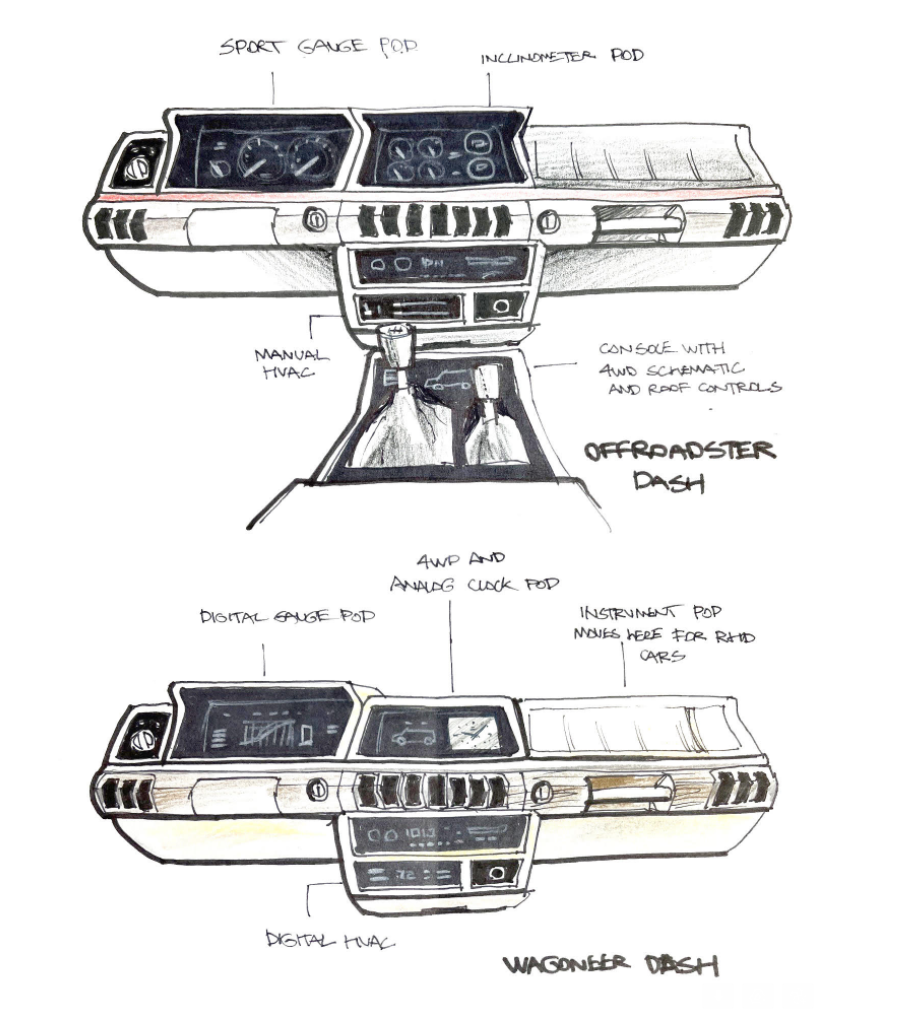 …and even came up with a stylish option known as the Jeepack, modeled here by a young and beautiful David Tracy circa 2015: 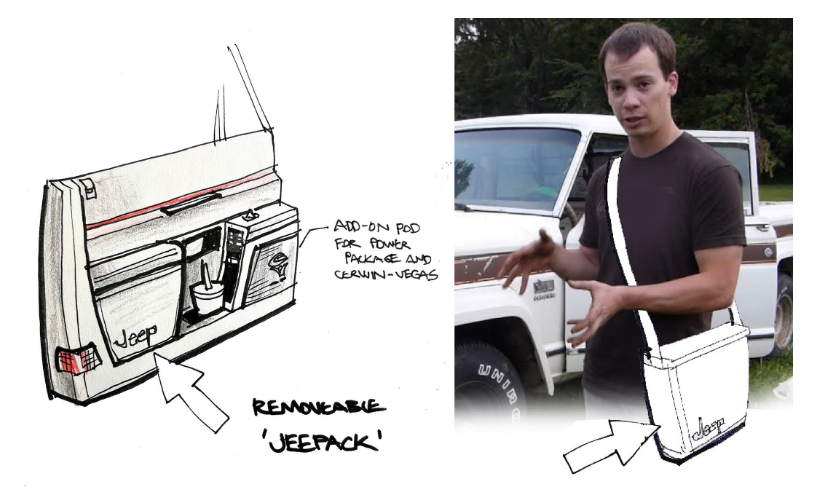 Okay, let’s get back to non-reality and our alternate AMC lineup, not the alternate Jeep lineup.

This one blurs the line between AMC and jeep, and while it seems on some level to be the most outlandish thing imagined here – a 2+2 sleek, tiny AWD sportscar – it’s actually the one that may have the most direct real-world equivalent: the Kaiser-Jeep Bolide XJ-002 concept from 1969. Actually, wait, there’s two real-world inspirations for this, because there’s also the 1970 Jeep XJ-001 concept, too! 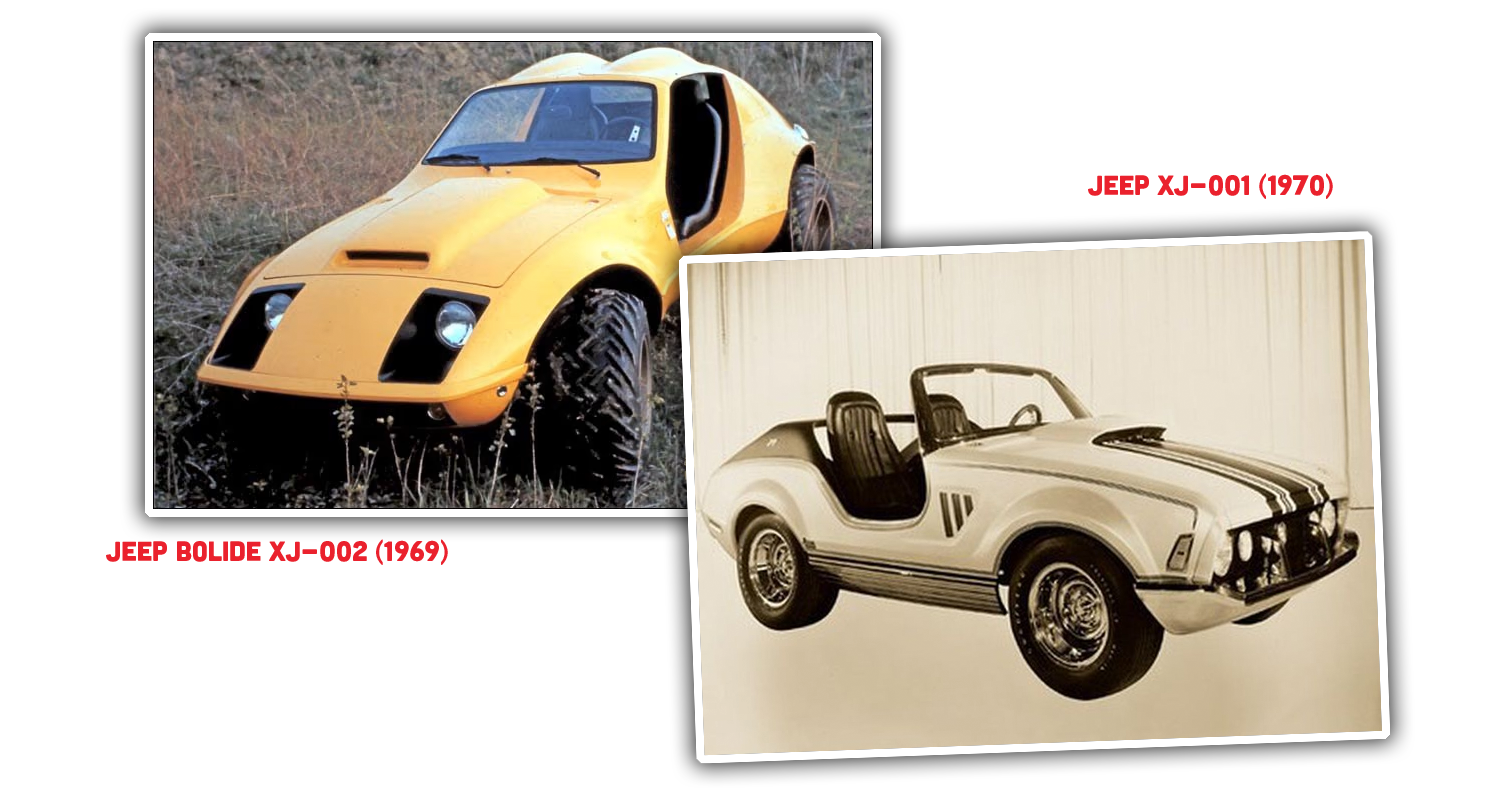 Jeep had done experiments involving putting sports car bodies onto Jeep chassis, in the case of the Bolide XJ-002 the CJ-based Jeepster chassis, and in the case of the XJ-001 a standard Jeep CJ chassis. This alternate universe Jeepster is essentially this same idea: stick a fun, possibly fiberglass or plastic sports car body on a rugged Jeep chassis and then just have fun!

I suppose in our reality Suzuki came close to doing this with the X-90, but the company never really pulled it off. I think this fictional Jeepster actually would have.

Essentially a re-badged Renault Espace but with AWD and some extra cladding, this would have been a pioneering off-roadable minivan. The Espace never came to America, but I suspect it could have done well, being extremely space-efficient and practical. Butch it up with AWD and some ruggedized looks and boom, you’d have a hit.

AMC’s legendary AMX muscle car could have taken an interesting turn here, and the Pacer influence isn’t as weird as it sounds. Remember that the designer of the Porsche 928, Tony Lapine, freely admitted to borrowing the design of the Pacer’s rear end when designing the 928.

The new AMX has some of that 928/Pacer look at the rear–actually, there’s Pacer influences all over it, which I think translates surprisingly well to a sports car. Where we had the disappointing Renault Fuego, this alternate universe has this AMX. We got shafted.

Here’s something AMC hasn’t really had since they stopped building Ambassadors in 1974: a full-sized premium car. Alternate universe AMC leverages that EX-platform Eagle to make a big sedan, and like so many other companies in the ’70s and ’80s, got some big-name designer to slap a logo on it, in this case Giorgio Armani. The design of this is quite European, likely from Renault influences.

Honestly, I’m pretty blown away by what AMC could have been in this alternate reality. Our secretive Bishop really delivered the goods with this one, looking deeply into his somehow-contained wormhole, seeking out the only truth from the infinite other universes that really matters: What is AMC up to?

I'm a co-founder of the Autopian, the site you're on RIGHT NOW! I'm here to talk to you about taillights until you cry and beg me to stop, which I absolutely will not. Sorry. Hug? Also, David's friend.
Read All My Posts »
PrevPreviousThe Lincoln Star Concept Is A Whole New Level Of Frunky
NextHow A Michigan Man Uses A Cheap Welder To Keep His Toyota 4Runner Family Vehicle On The Road After The Frame Began Rusting To The GroundNext