The Lincoln Star Concept Is A Whole New Level Of Frunky 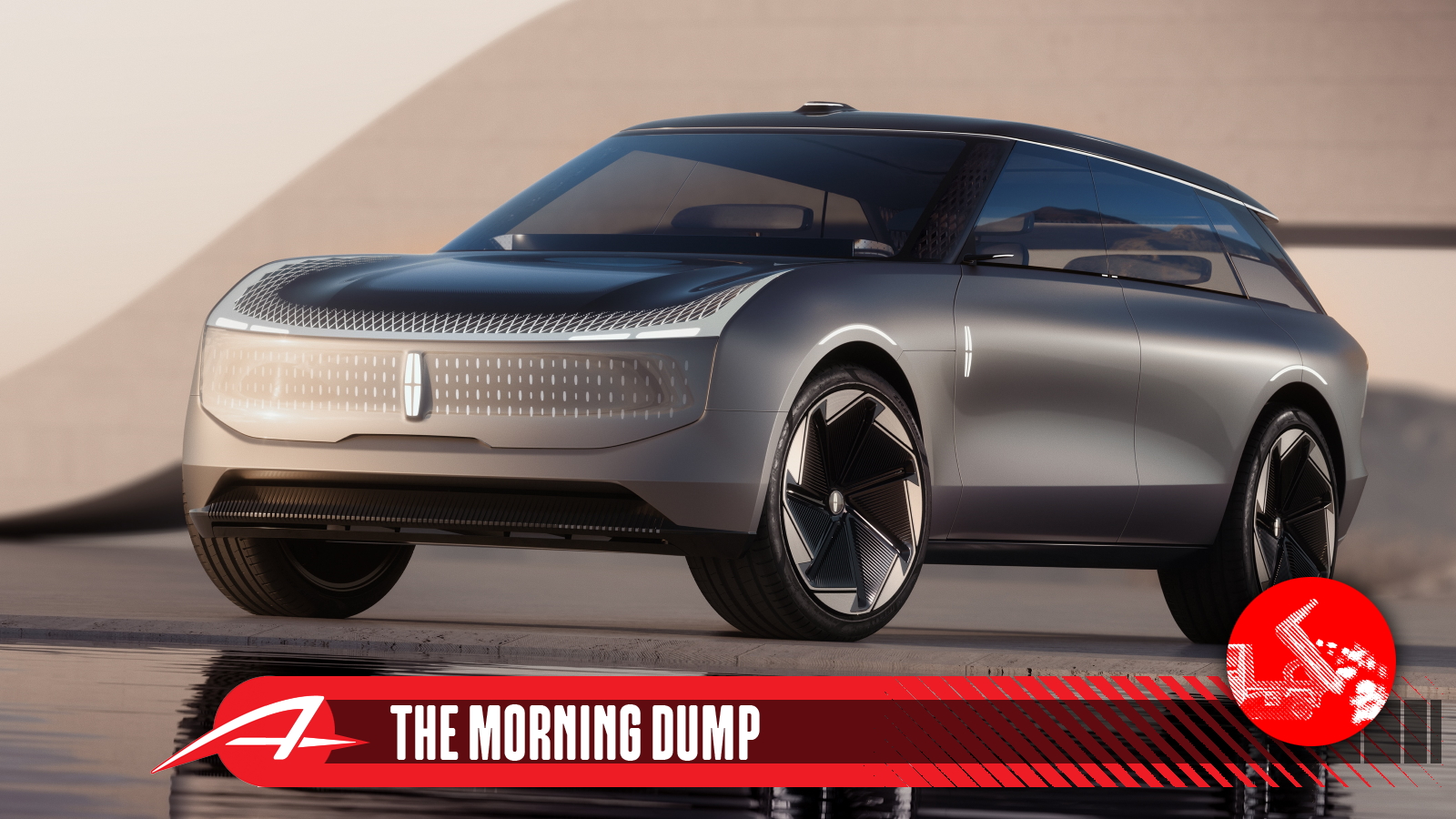 The Lincoln Star concept signals the American brand’s EV future, Volkswagen’s upgrading its EVs, the used car market gets even weirder. All this on today’s issue of The Morning Dump.

It’s a rare thing these days for a car manufacturer to pull the curtain and reveal a pure show car, yet Lincoln clearly isn’t afraid to dream. Yesterday in California, the American luxury car brand unveiled a high-end electric concept SUV called the Star and announced three new fully-electric vehicles by 2025. Let’s take a closer look at the Star.

For starters, the Star doesn’t pack truly revolutionary styling. We’ve seen strong horizontal character lines, blacked-out roof pillars and a tapering roof line on Lincoln’s Aviator mid-sized luxury SUV. However, the Star does feature unique front and rear styling, some of which I hope to see on future models.

Let’s start with the front end. Ford’s been dropping some frunky fresh beats in the Mustang Mach-E electric crossover and F-150 Lightning electric pickup truck, so it shouldn’t be surprising that the Lincoln Star concept packs an outrageous frunk. Not only is it lined in decadent alloy trim, it also features two levels. The traditional frunk panel lifts up to reveal one level, while the whole faux grille slides out to reveal a drawer. In an extra touch of preposterous extravagance, the frunk panel features an electrochromic glass insert that can turn from opaque to clear at the touch of a button. Sounds like a good way to get robbed.

On the inside of the Star, there’s a mixture of stuff we expect to see and stuff that’s incredibly far out there. In terms of sensible features, the entire floor is flat for enhanced knee space and easy access. Also suspiciously production-ready is the oval steering wheel, and while the full-width semi-translucent dashboard screen likely isn’t a producible product, the Chinese-market Lincoln Zephyr sedan features a similar full-width infotainment system.

Moving on to flights of fancy, Ford’s still addicted to pillaging Premier Automotive Group’s best ideas, so latticed A-pillars like on Volvo’s 2001 SSC concept car aim to reduce front blind spots on the Star. Judging by the completely transparent, perfectly smooth pedals, latticed A-pillars may be a bit too much safety for Lincoln.

Now for the mystery. Lincoln’s been silent on autonomy surrounding the Star, but the concept SUV appears to have a forward-facing sensor on the roof, possibly one of the LIDAR variety. Hmm.

As for those aforementioned electric vehicles, here are a few more details. Lincoln claims that the Star concept rides on Ford’s next-generation flexible electric architecture. With rear- and dual-motor configurations on tap, it should share fairly little with the Mustang Mach-E’s platform. Expect this new architecture to underpin future Lincoln EVs, including a possible EV version of the Lincoln Aviator midsize SUV. According to Roadshow, Ford announced plans to build an electric version of its Explorer seven-seat SUV at their Capital Markets Day Event last year. Now, I’m no insider, but since the current Aviator is based on the Explorer, it makes a lot of sense to continue the trend into the electric era. Then again, a Ford engineer could also be laughing out of their chair upon reading that statement, so we’ll have to cross our fingers and see.

Also, those three new electric Lincolns by 2025? There’s one more coming in 2026. Talk about buying the lede.

Home On The Range

Volkswagen’s electric cars are set to get a whole lot more capable. A few days ago, investment firm UBS held what they called an Electric Car Day in Paris and Volkswagen was in attendance. The German automaker produced this slide deck which details a massive leap in range and speed for their MEB electric car platform.

These upgrades target a maximum range of 435 miles (700 km) on the WLTP cycle, although it’s worth noting that the WLTP cycle is often rather optimistic. Still, that’s a herculean figure that should vault long-range electric Volkswagens close to the front of the EV pack. This range increase will likely be in part to larger battery pack options. Could we see one of these new battery packs underneath the US-spec ID. Buzz? Only time will tell.

Of equal importance is an increase in peak charging speed capability from 150 kW to 200 kW. That’s nowhere near as great as the 350 kW capabilities seen in some Hyundai Group products, though it’s still quite good compared to the rest of the retail-grade EV market. Speaking of quick, the 0-62 mph dash is expected to drop from 6.2 seconds to 5.5 seconds for all-wheel-drive vehicles, a pretty significant upgrade.

A significant upgrade to the MEB electric platform was fairly unexpected, especially considering how VW has a new Scalable Systems Platform in development. Still, more capability and faster charging is always nice.

While the used car market being seven different kinds of messed up isn’t exactly new information, the nuances of it give pause for thought. One of the most thought-provoking nuances is how the Manheim used car wholesale index has diverged from the CarGurus used car retail price index again. If wholesale auction prices for used cars are dropping, why are retail prices for used cars rising? It’s time to take a closer look.

Let’s start with the obvious – new car supply isn’t anywhere close to normal, so people are holding on to their old cars. According to the analysts at Cox Automotive, pre-pandemic used car supply ended 2017 and 2019 with 76 days of average on-lot inventory. Now though, dealer supply of used cars on March 11 was just 44 days. While that’s definitely an improvement over extreme shortages seen last year, there’s still a long way to go before we see normal used car supply again. How about the demand side of supply and demand? Well, that’s a bit complicated. Among a variety of contributing factors like lower repossession rates and used car demand from rental companies, fluctuating high gas prices are making values for thirsty used vehicles unsurprisingly volatile.

While some easing is expected through 2023 as semiconductor production ramps up for new cars, it could be quite a while before values fall back down to earth. For better or worse, there hasn’t been a better time in recent history to pick up a spanner and keep your current ride on the road. Hey, whatever needs fixing is probably cheaper than a year of payments on an equivalent replacement car. More importantly, if you want to unload an unused car while the market is hot, you still have a bit of time. Hey David, how’s paring down your Jeep collection coming along?

Whelp, time to drop the lid on today’s edition of The Morning Dump. With the kneecapping of auto shows that’s been going on over the last decade, do concept cars still elicit the same oohs and ahhs they once did? I used to love going to the show to see everyone’s latest design language and previews of future tech. With online releases, it almost feels like the thrill is gone for me. Maybe I’m just jaded, but I’d love to hear your thoughts on the subject.

Thomas is a Nu Rave-blaring, heel-toe downshifting, maple syrup-swilling, chassis-geeking, junkyard parts-hauling, floppy-haired scenester who's been writing about cars since college. His current ride is a 2006 BMW 325i with the six-speed manual gearbox. Instagram: @thomas.hundal Twitter: @thomashundal
Read All My Posts »
PrevPrevious$1,500 Volvo 240 Versus $2,000 Subaru Outback: Battle Of The Hipster-Mobiles
NextA Trained Designer Imagines What American Motors Corporation Would Have Been Like If It Had SurvivedNext