It’s Day 4 of our quest for the perfect dirt-cheap daily, and today we’re coming back to my hometown of the past fourteen years: Portland, Oregon, the town where all the streets are named after Simpsons characters (or is that the other way around? Stupid Flanders). But before we head for the food carts, let’s see how our Twin Cities twosome from yesterday fared:

Looks like the ugly two-tone Toyota Camry beat the ugly two-tone Chevy S-10. Lots of commenters mentioned the two-wheel drive Chevy’s lack of ability to handle the weather; guess you all aren’t fans of snownuts.

Portland is, as so many people in town will tell you, loudly and repeatedly weird. But all too often it’s weird for weird’s sake, like the guy who rides a unicycle around town wearing a Darth Vader mask and a kilt and playing the bagpipes. (No, really). And the ones who aren’t trying to be weird seem to fit all the hipster stereotypes: They want you to go to the IPA festival with them (no thanks; most IPA tastes like punishment for something) or tell you all about some band they assume you have never heard of (oh, I’ve heard of them; they just suck) or convince you that the kale salad is delicious because there’s bacon on it (kale is irredeemable, and stop putting bacon on everything).

I like it here; just sometimes it’s so… damned… Portland.

The carspotting is top-notch here, however. I know of one street where I regularly see three derelict Citroëns, a Honda Beat, an original ’60s Jeep Wagoneer, a daily-driven Volvo 122, and an early ’80s rear-wheel drive Mazda 626 coupe in perfect condition — all just sitting at the curb like they’re no big deal.

In the other cities we’ve discussed this week, I’ve shown you the cheapest of the cheap — the best potential daily drivers I could find for as little money as possible. I can’t do that in Portland because I already own the best cheap beater in town – a 1995 Toyota Corolla that I bought for $500 two years ago – and it’s not for sale. So stop skulking around my driveway.

But there are two cars that are emblematic of Portland, its recent past and its constantly in flux present: the Volvo 240, and the Subaru Outback, and I found one of each in our sub-$2,500 price range. 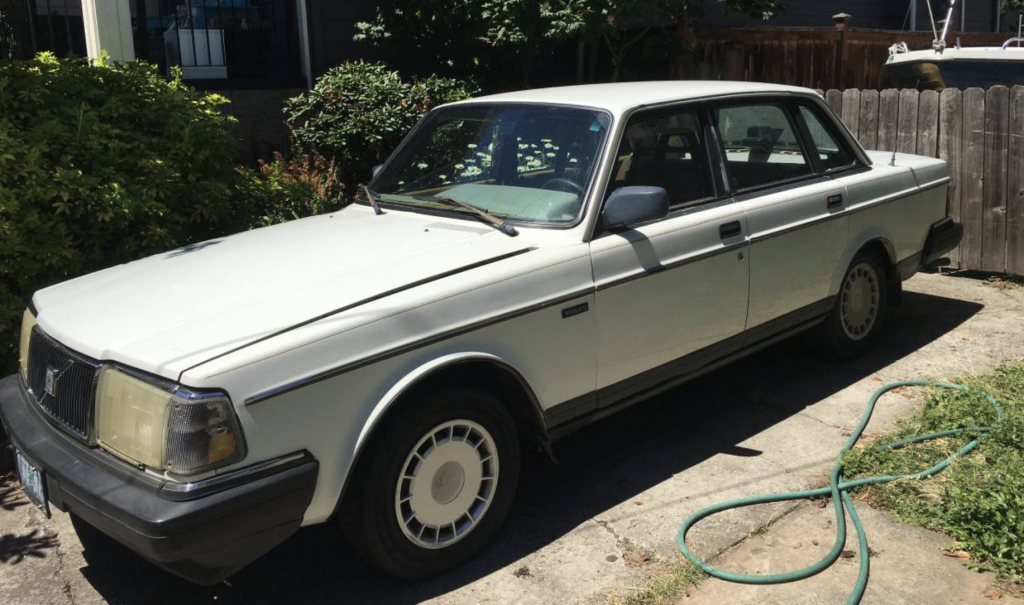 Runs/drives? Yes, but needs a battery

There is a school of thought that has spawned an entire automotove subculture — one that says that car design peaked with the Volvo 200 series, and everything since then has been an exercise in futility. You’d call them Luddites or curmudgeons, except that you look around and see that these old boxes are still everywhere, and the newest of them is now 29 years old, and they still look good. You begin to wonder if those stubborn Volvo fans are on to something. 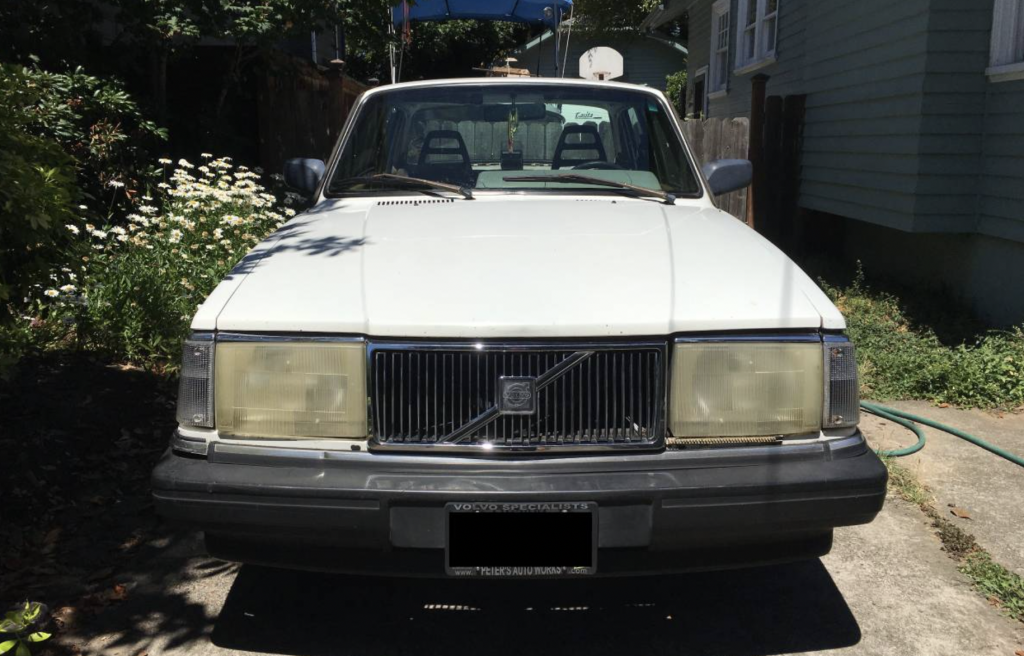 The cars are sturdy: Volvo led the charge in safety as a selling point, and for many years the Swedish cars were considered some of the safest cars on the road — built like tanks. Volvo’s legendary “red block” engine has its roots in the Mesozoic Era, but was modernized and perfected as new technologies came along, and is still spoken of in hushed tones of reverence among the Volvo faithful. 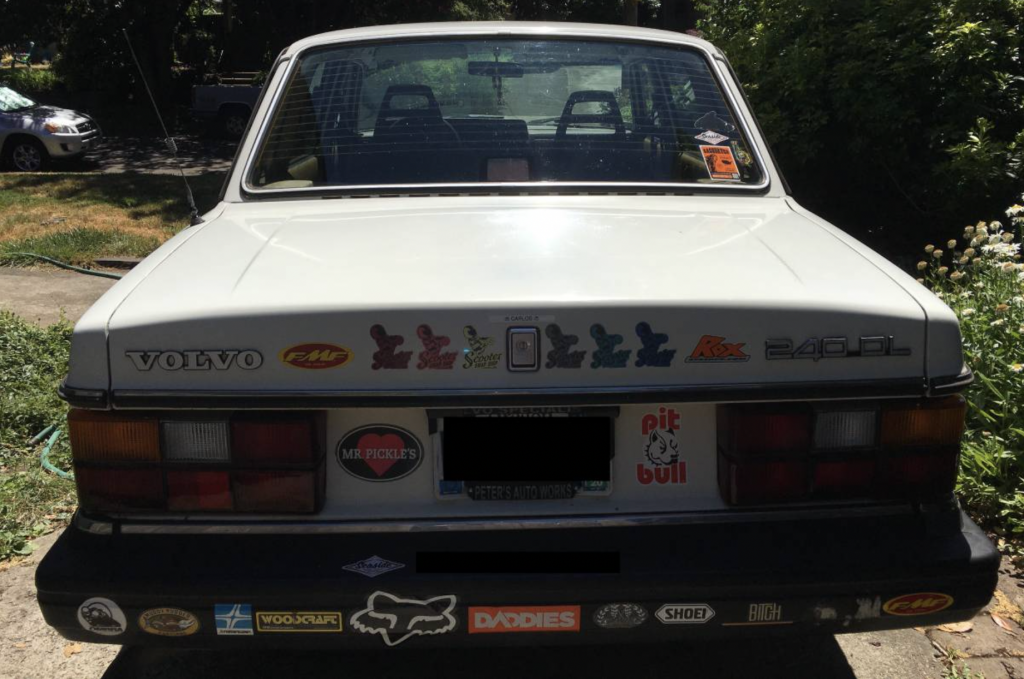 This one features a 4 speed overdrive AW70 automatic transmission, which like the rest of the car is built like a brick shithouse [Editor’s note: I don’t know what that last line means, but I can tell you that AW, which was a partnership between transmission makers Aisin and BorgWarner, created some of the stoutest automatic transmissions of all time, including the Jeep Cherokee XJ’s AW4. -DT]. Sure, a manual would be nice, but at this price, beggars can’t be choosers. The car has new tires, but has been sitting long enough for the battery to go flat; stop at Les Schwab and pick a new 12-volt on the way. The odometer is said to work, but the seller doesn’t mention the 240’s other trouble spot: the HVAC blower fan motor, which is behind the dash and allegedly a nightmare to replace. Best to test it before you buy. 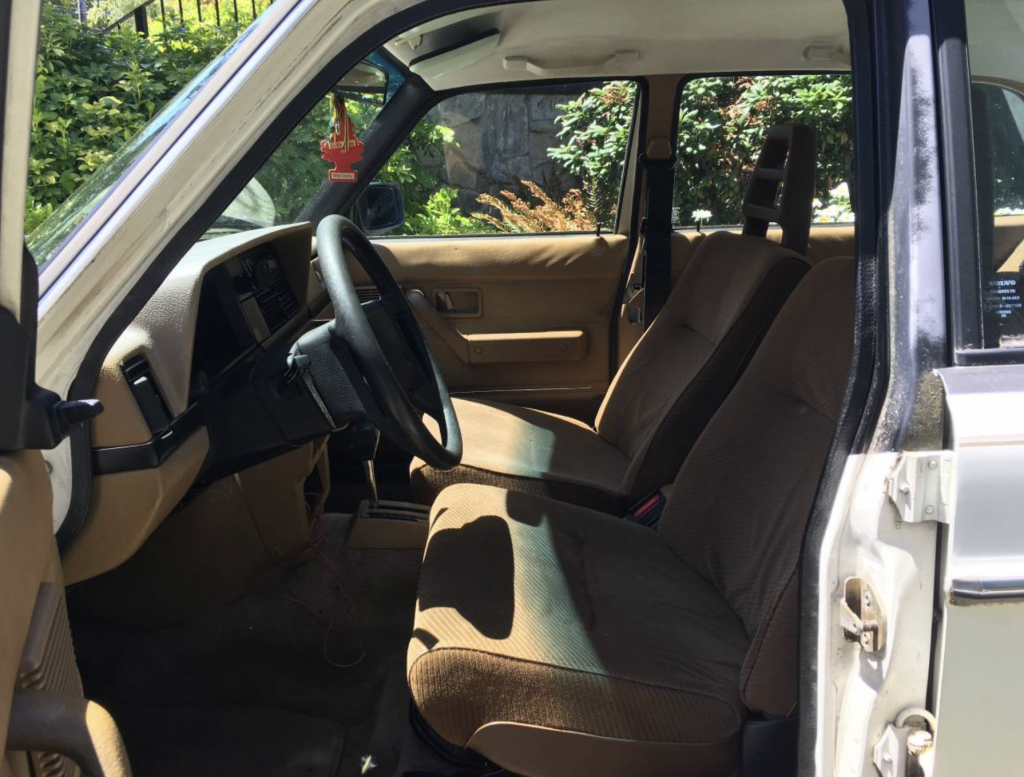 Realistically, if you want a Volvo 240, you should buy one now. These cars are starting to turn the corner from cheap reliable beater to respected classic, and they will probably never be this cheap again. This car, with a rebuilt title, probably won’t gain a lot of value, but in general, 240 prices are rising. By my count, this particular 240 is only $62.50 per bumper sticker, a bargain. Don’t miss out! 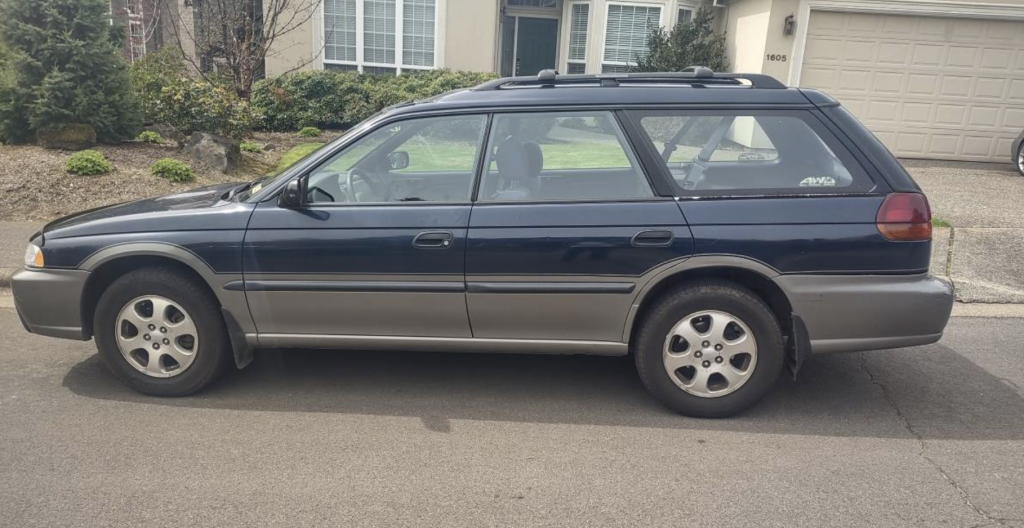 Runs/drives? Yes, but the tags are long expired

Some years ago, my wife and I were circling a parking lot, looking for a free space. “There’s one,” I said, “between those Subarus.”

“You’ll have to be more specific,” she replied. “Every spot around here is between the Subarus.” 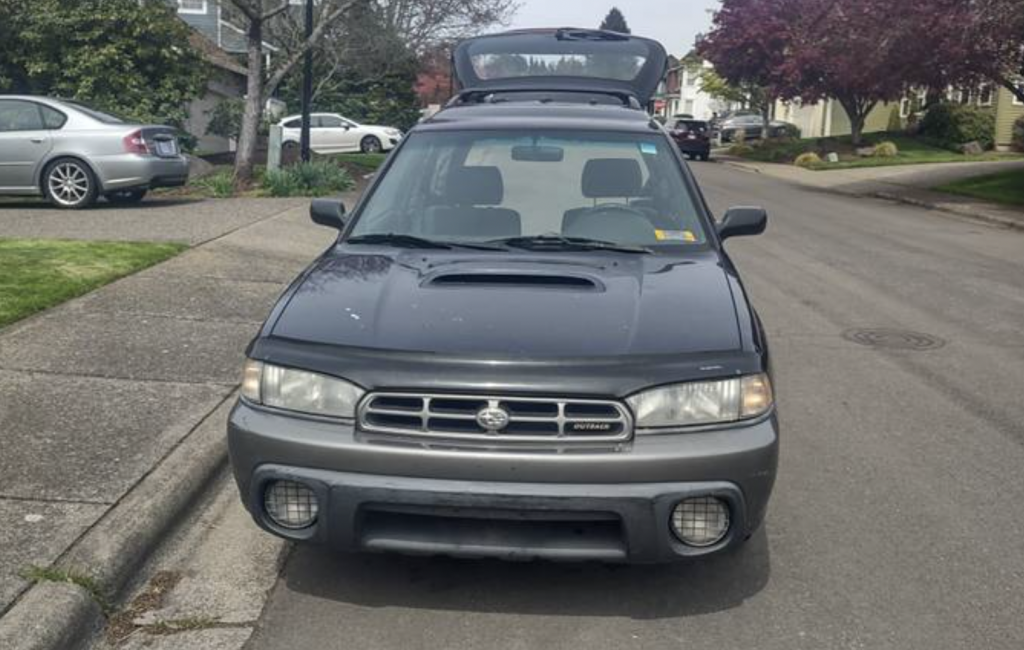 If there is an official car of the Pacific Northwest in general, and Portland in particular, it is the Subaru station wagon. Doesn’t matter if it’s a Legacy, an Impreza, an Outback, a Forester, or that big new Ascent — you just can’t escape the Subi wagon. Horizontally-opposed engines and all-wheel-drive are just the only way to fly for a lot of people around here. Often fitted with rooftop cargo boxes festooned with stickers, Subaru wagons occupy roughly 40% of any given New Seasons Market parking lot on any given day.

Needless to say, that popularity means you’re spoiled for choice when it comes to secondhand Subarus, but they also tend to be over-valued; this Outback is the cheapest good one I could find. It’s a late first-generation Outback, based on the second-generation Legacy wagon, and by this time Subaru had stopped shoving the wheezy little 2.2 liter engine in and switched to a dual-overhead-cam 2.5 liter unit (if it’s a flat 4, is that a dual-next-to-head-cam?). This one, as most are, is an automatic; Outback buyers aren’t often the row-your-own type.

Condition-wise, it doesn’t look bad at all, though the 2018 tags don’t inspire confidence. Has it been sitting all that time? Or has someone gotten away with driving it on expired tags that long? It’s a question worth asking. At least Oregon doesn’t demand back registration fees like California does, but it will have to pass a smog test. 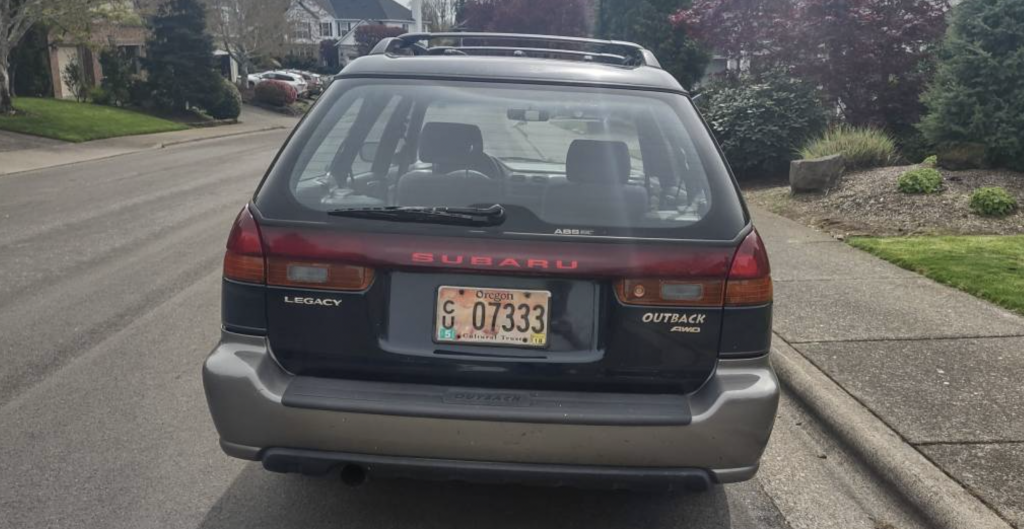 So that’s it for daily driver week; it comes down to a boxy-but-good Volvo sedan or a don’t-lose-it-in-a-parking-lot Subaru wagon. The winner will face our three other finalists to vie for the coveted Shitbox Of The Week title. Stay tuned.

Read All My Posts »
PrevPreviousCold Start: What’s Going On Here With These Thunderbirds?
NextThe Lincoln Star Concept Is A Whole New Level Of FrunkyNext