Toyota Camry Versus Chevy S-10: The Search For A Good Cheap Beater In The Twin Cities 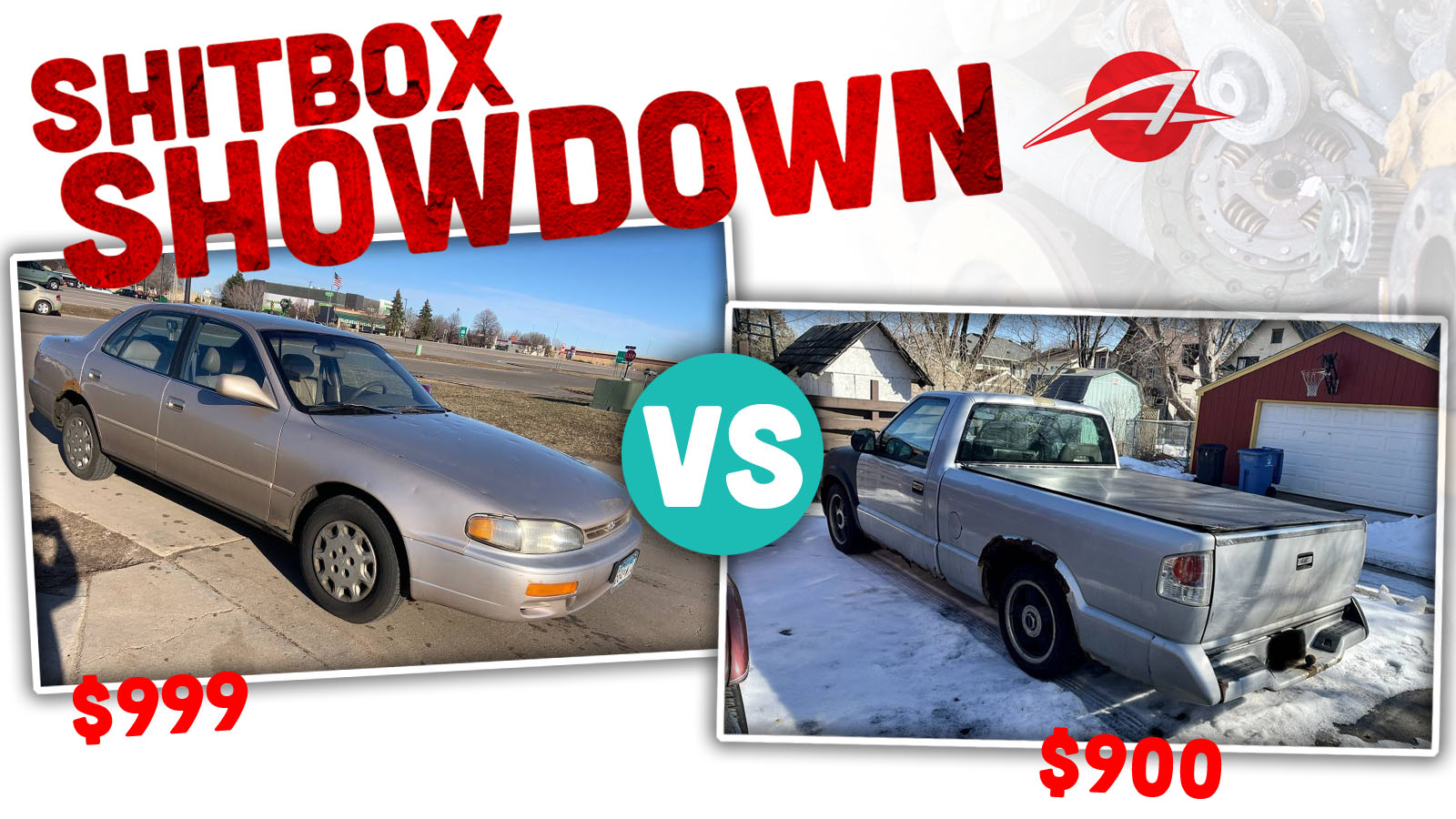 Welcome back to Shitbox Showdown! Today we’re off to the Twin Cities of Minneapolis and Saint Paul, Minnesota, home to Paisley Park, the Mall of America, a giant sculpture of a spoon with a cherry on it, and snow. Lots and lots of snow.

But before we head north, let’s see how our California rides did:

Yeah. That would be my choice, too. That V6-powered petri dish of a Chrysler minivan is the stuff of nightmares. The five-speed Ford Focus takes the cake. Now you just need to get a ride out to pick it up from Missy–I mean, Mom.

[Editor’s Note: Luckily Mark provided me with a cheat-sheet for today’s pop-culture references. I’d have gotten the “Tru-Coat” one, but that’s all. From Mark:

Oh, and “Missy-I mean, Mom” is a joke from the Bill & Ted movies, Tru-Coat is a Fargo reference, Ole and Lena jokes are a time-honored Minnesota tradition, and the Replacements were a Minneapolis hard rock band in the ’80s whose live shows were famous for being rowdy and out-of-control. Hope this helps.

Ole and Lena went to the county fair, and saw a sign that said “AIRPLANE RIDES $10.” Ole said, “Lena, let’s go take a ride on the airplane.”

The pilot overheard this and told them, “I’ll make you a deal. I’ll take you up for the ride, and if neither of you makes a single sound or says a single word, when we land, I won’t charge ya.”

They agreed, and took the ride. The pilot did loops, barrel rolls, everything he could think of to get them to shout or scream, and… nothing.

“Boy, I gotta hand it to ya,” the pilot said after they landed. “I’ve never had anyone be able to keep quiet before.”

Which is to say, Minnesotans are a thrifty bunch. They tend to use things up all the way down to the nub to keep from having to spend money. This makes cheap used cars that don’t already have one foot in the junkyard hard to find. But I did manage to find a couple of likely-looking inexpensive clunkers that aren’t even all that rusty. (I mean, that Tru-Coat™ can only do so much).

And here they are. 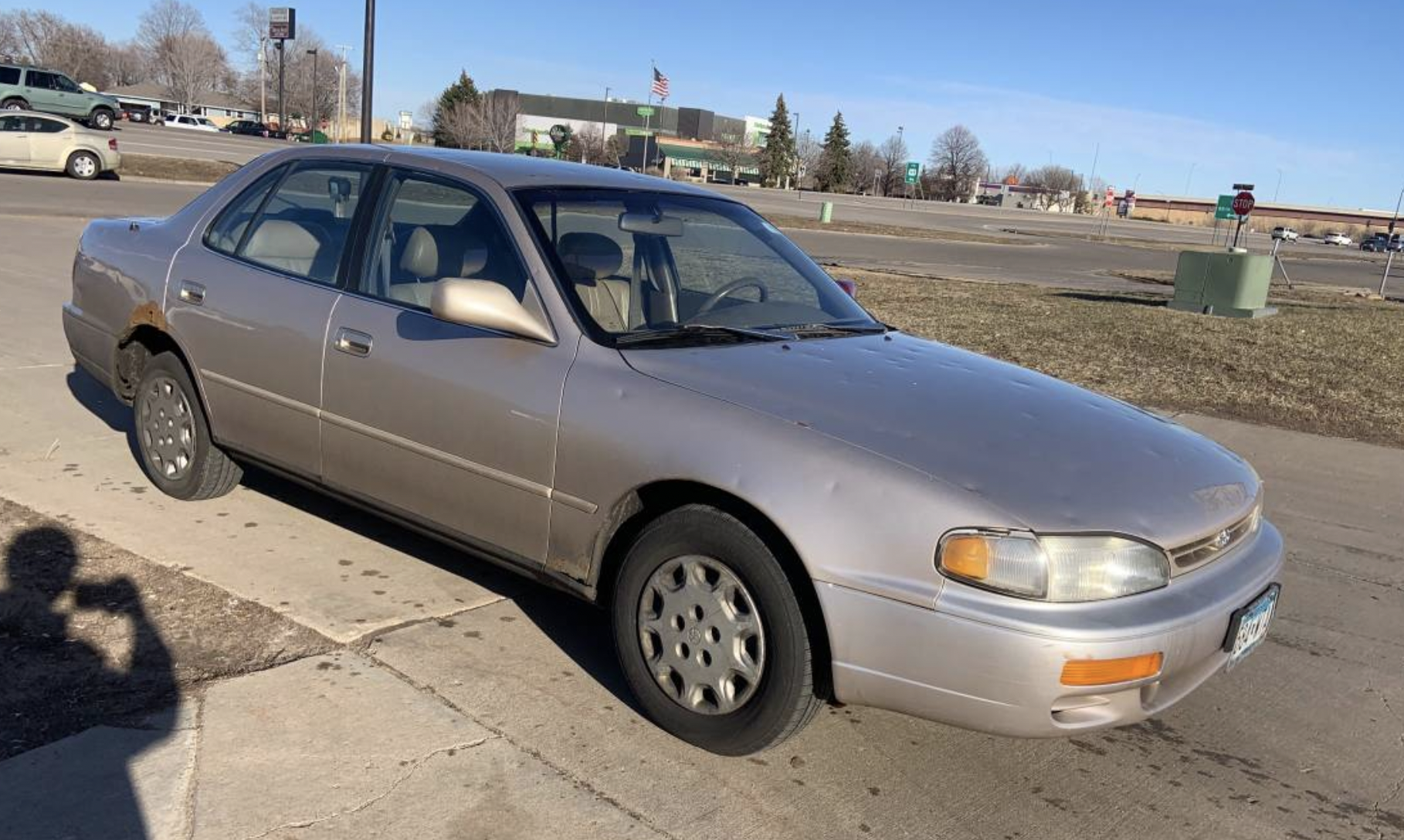 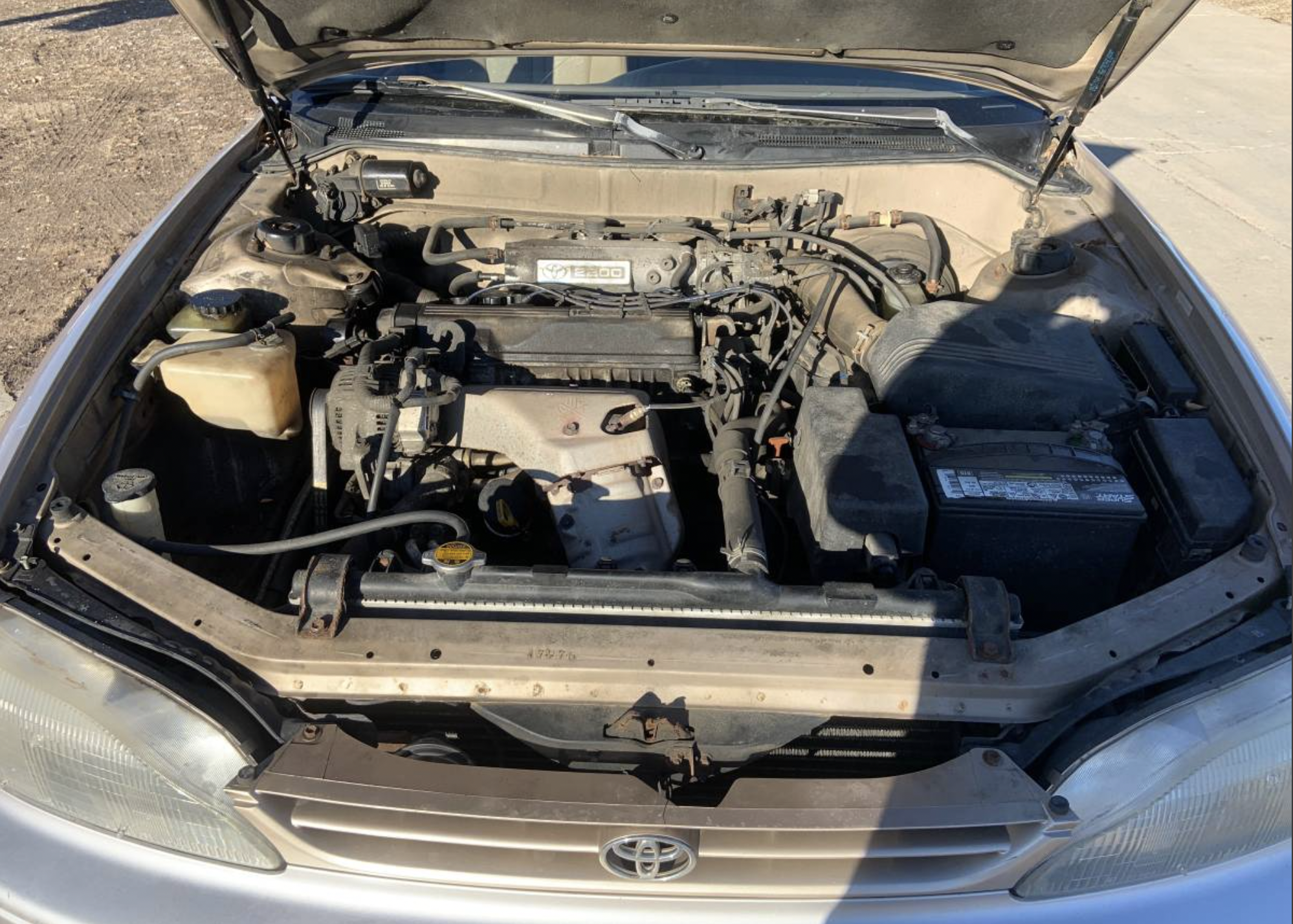 Imagine a car so durable, so trouble-free, that The Onion once made fun of it for being too good. A car so legendarily dull that in some parts of the country it is actually used as a sleep aid. A car available in five different shades of tan/taupe/beige that all somehow manage to clash with each other. A car that Just. Won’t. Die. That car is this car, the XV10 Toyota Camry. 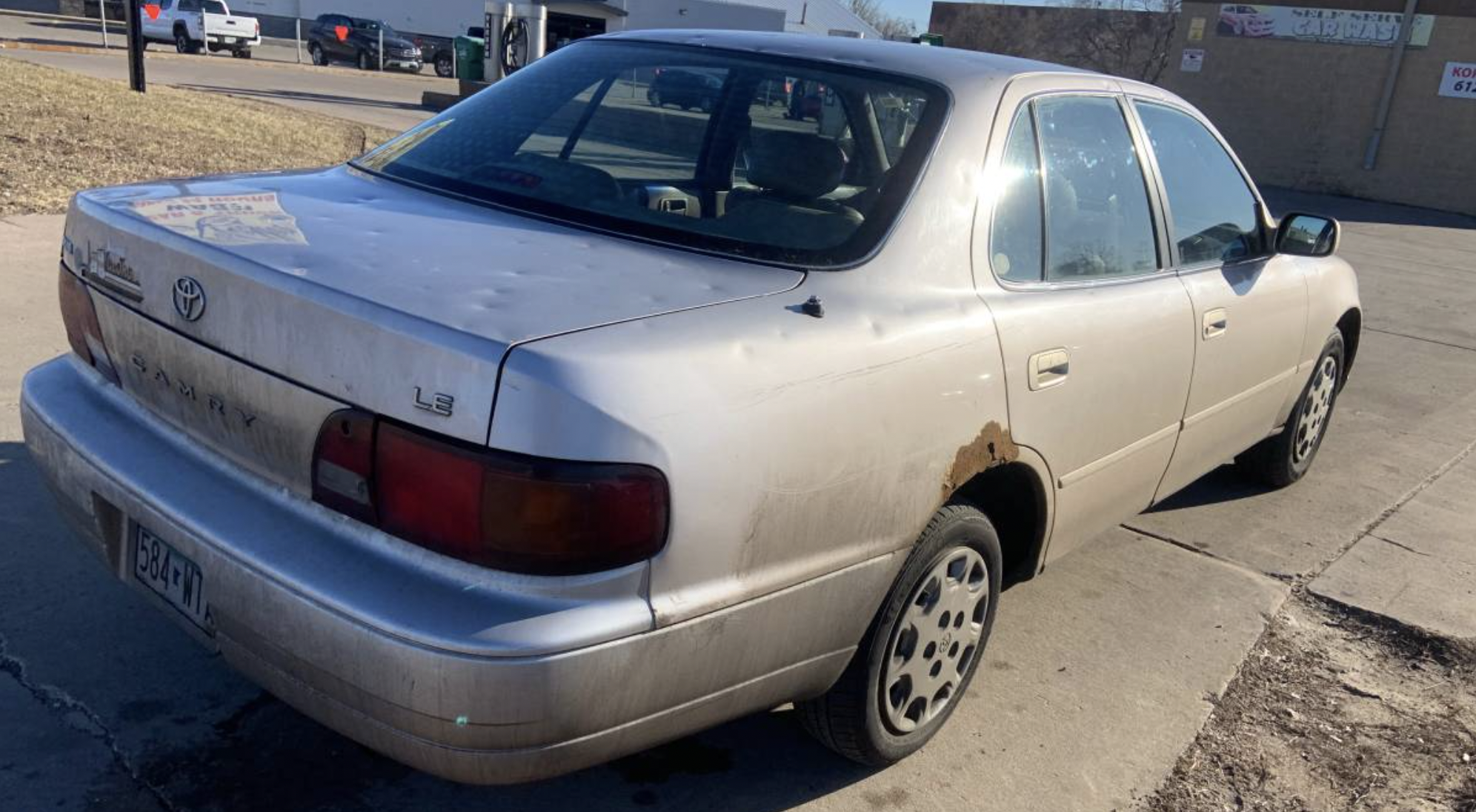 This particular Camry has clearly not led an easy life. From the mismatched driver’s door to the hail damage to the obviously-not-the-right-size rear tires, it bears the scars of a life used casually and cared for haphazardly, as so many Camrys do. Somehow, miraculously, it has managed to avoid acquiring the “Camry Dent,” but I think the bashed-in left rear door and missing fuel door (why are they always missing on these?) make up for it. 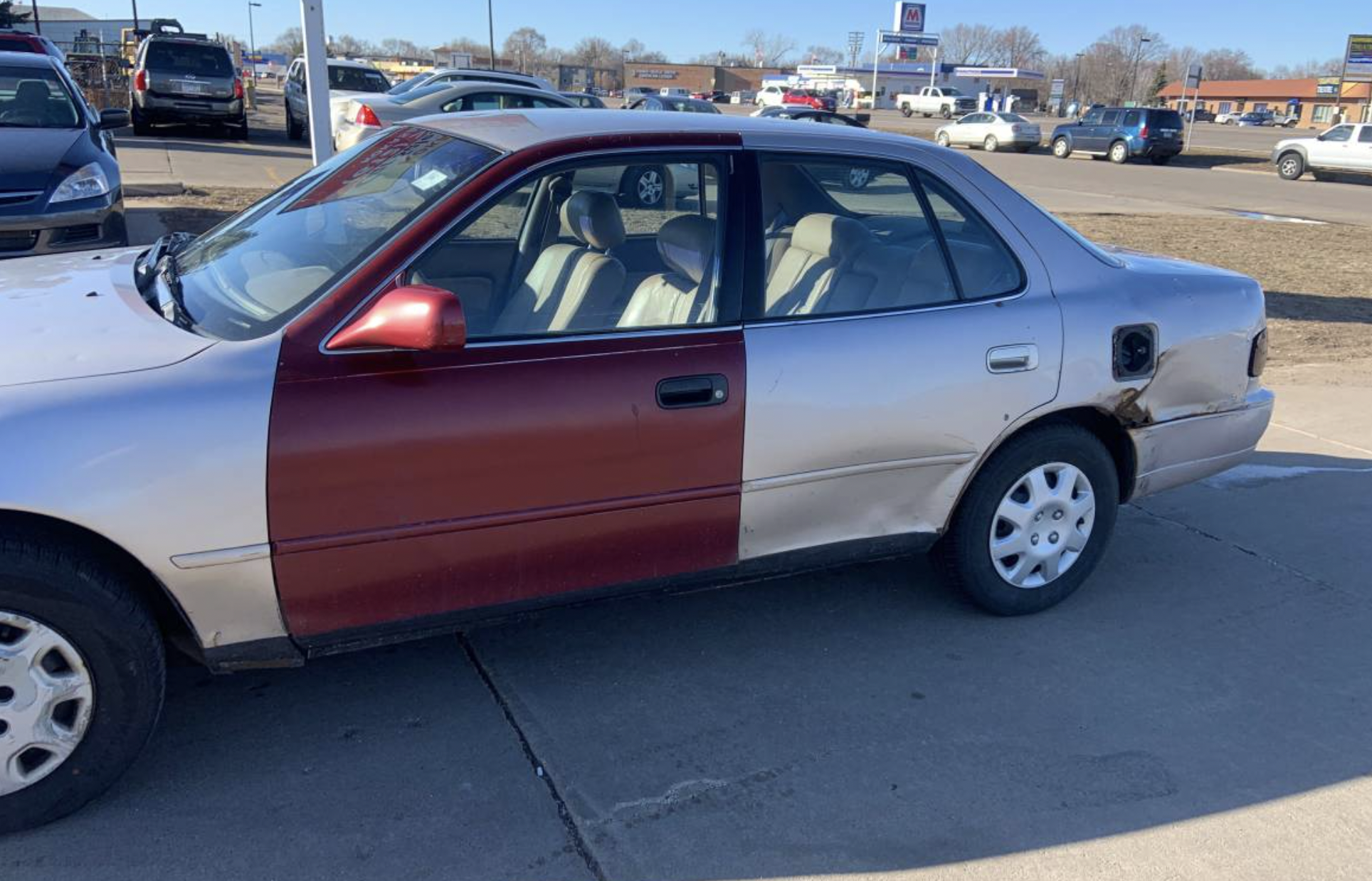 It also shows a healthy dose of “Minnesota weight reduction” around the rear wheel arches, but for 26 winters in, it’s not terrible. Inside, it actually looks kinda nice, and it’s fancy as Camrys go, with leather seats and fake wood on the dash. Heck, it’s practically a Lexus. Or at least as close as Ole and Lena are likely to get.

The seller says it has an oil leak, but doesn’t specify where. If it’s just that seeping valve cover gasket shown in the photos, that’s nothing. Twenty bucks, a ten-millimeter socket, and an hour, and you’re leak free. If you can get past the cosmetic deficiencies, this could be a decent cheap winter car for a few years. I mean, two hundred thousand miles? That’s just about broken-in. 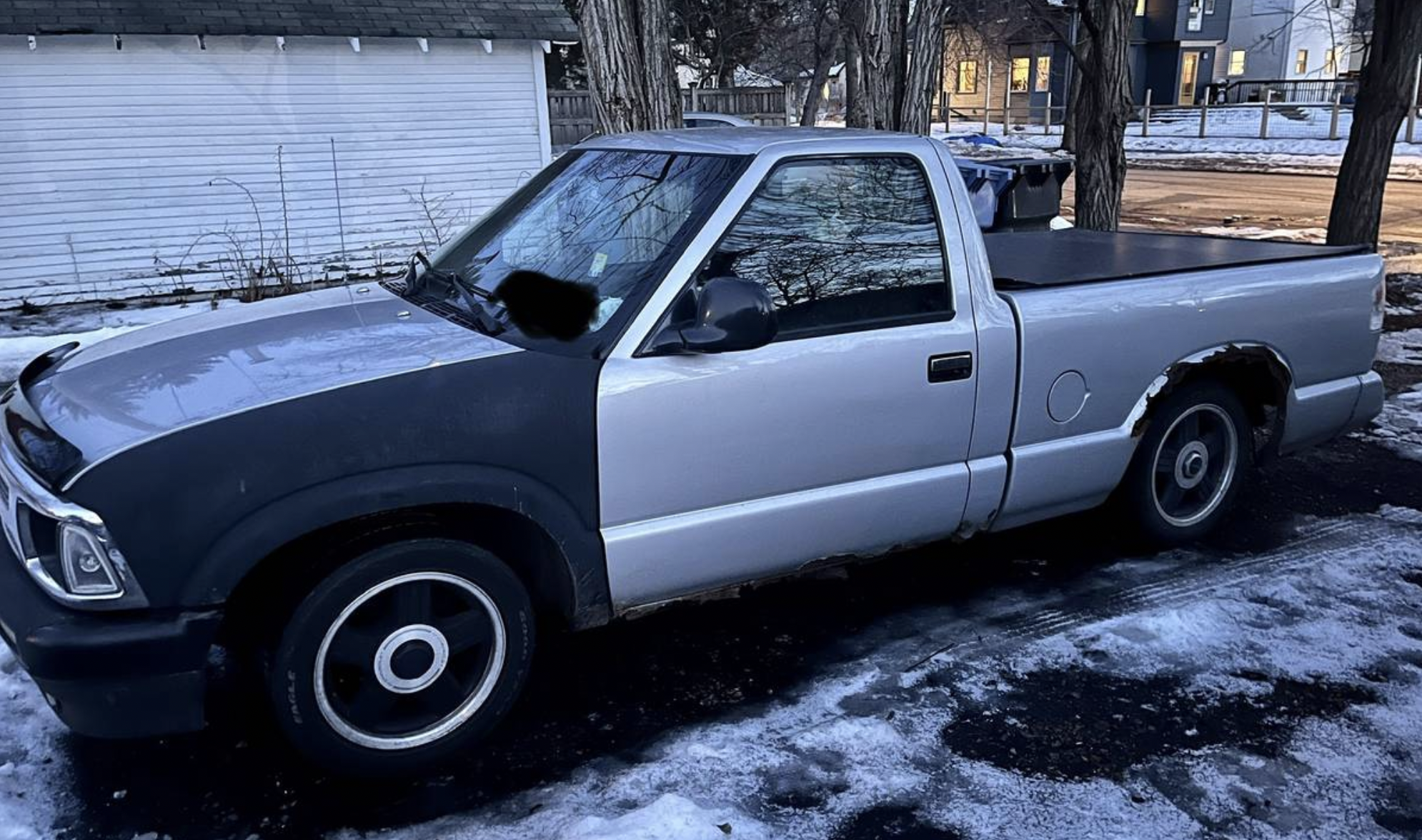 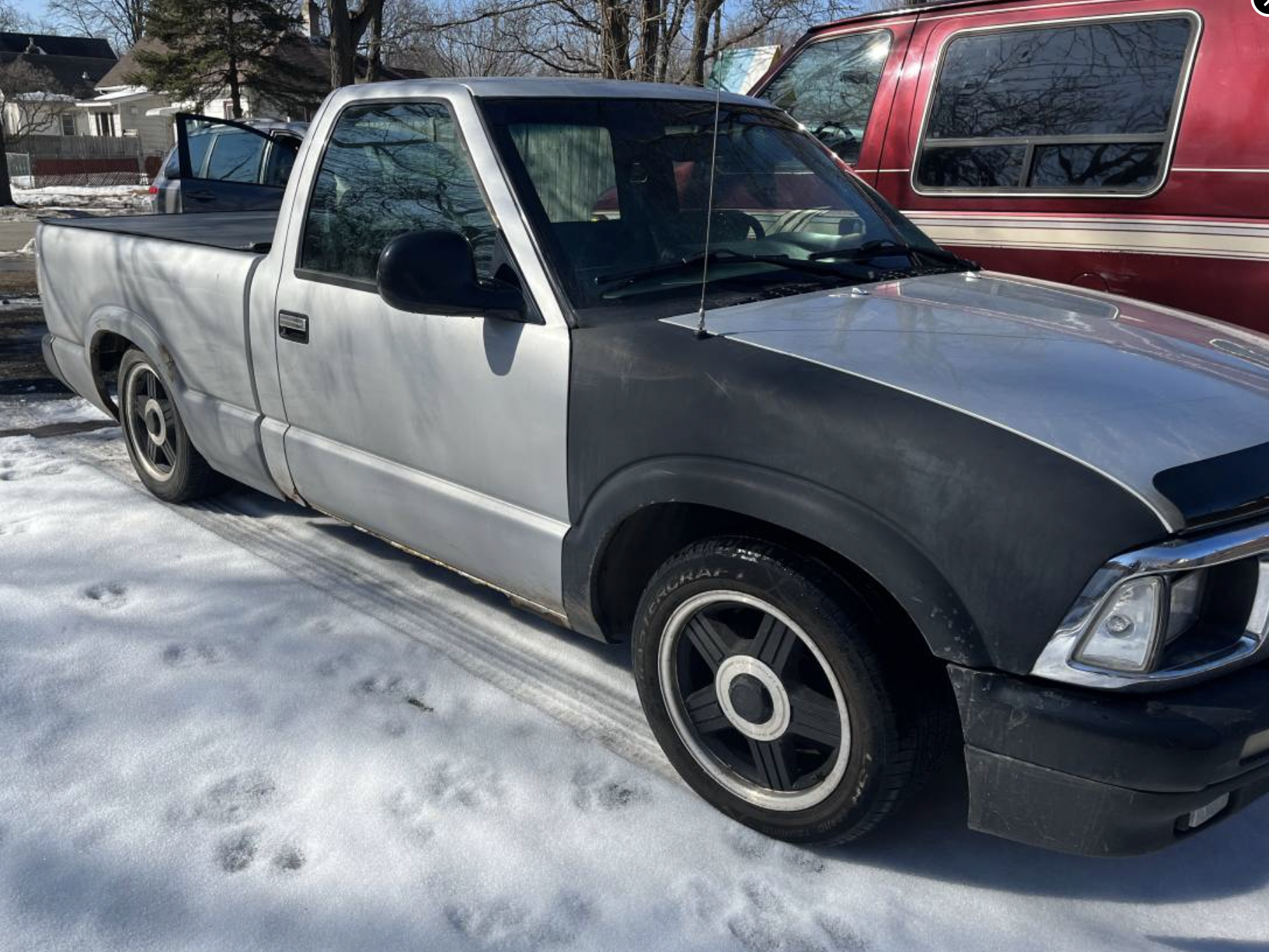 The second-generation Chevy S-10 is better than people give it credit for. The blobby styling is arguably a step back from its square-jawed predecessor, especially once it gets some dings and dents, and the interior plastics lasted about a week, but mechanically these little pickups are stout. They were cheap, and considered somewhat disposable, but refused to be disposed of. It’s not uncommon to see them looking like absolute hell but running fine, which personally I’d take over the other way around, especially in a truck.

This one has some questionable modifications – the lowered suspension, the stereo that you know is connected to some gigantic carpet-covered subwoofer box behind the seat, those wheels – but the bones are good. GM’s three-fourths-of-a-350 4.3 liter V6 is a good engine, and the NV3500 transmission is rock-solid, though the shifter can get pretty sloppy after a while. 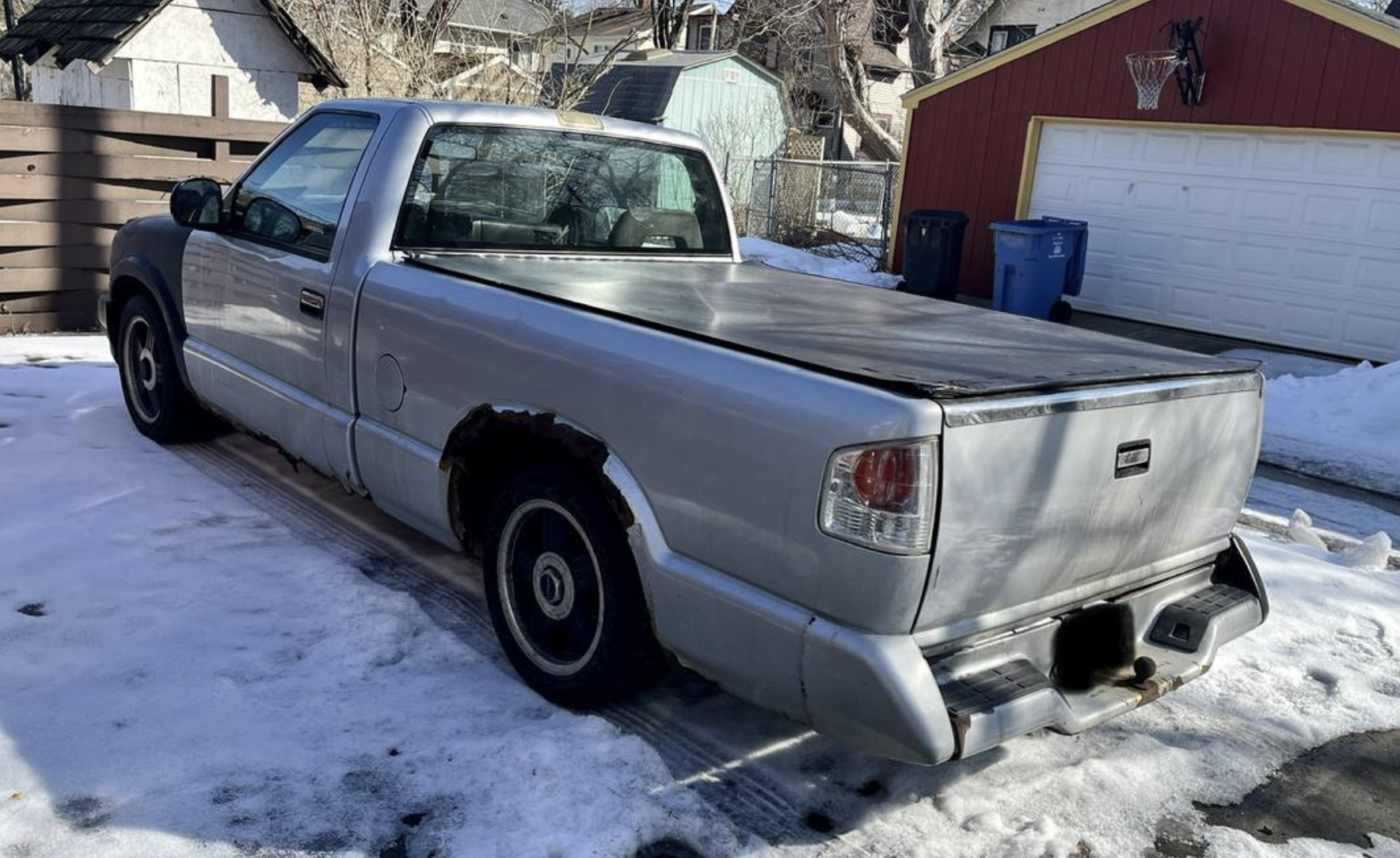 The photo of the dash is encouraging, and a good thing for the seller to include: warming up, idling at 800 RPM, no warning lights, everything in the green. Whatever indignities have been forced upon this S-10 cosmetically, it is, by all appearances, a good-running little truck. It’s likely to be as raucous and noisy inside that little cab as a Replacements show at First Avenue, but you don’t buy a truck like this for luxury.

And yeah, it’s rusty. If I had to guess, those new front fenders are there because the originals were flapping in the breeze at the bottom. It would be worth taking a close look at the frame to make sure the rust is confined to the body, but the telltale gap between the bed and the cab is nice and even still; that is a good sign.

There you have it – two rusty beaters from the Land of 10,000 Lakes. Which slice of Minnesota Not-So-Nice will it be?

Read All My Posts »
PrevPreviousCold Start: Imagery Is Important
NextHere’s What You Need To Know About BMW Isetta Taillights And Wipers To Join The Exclusive Taillight CommunityNext