If You Wanted To Buy A Ford Mustang Mach-E Anytime Soon: Too Bad 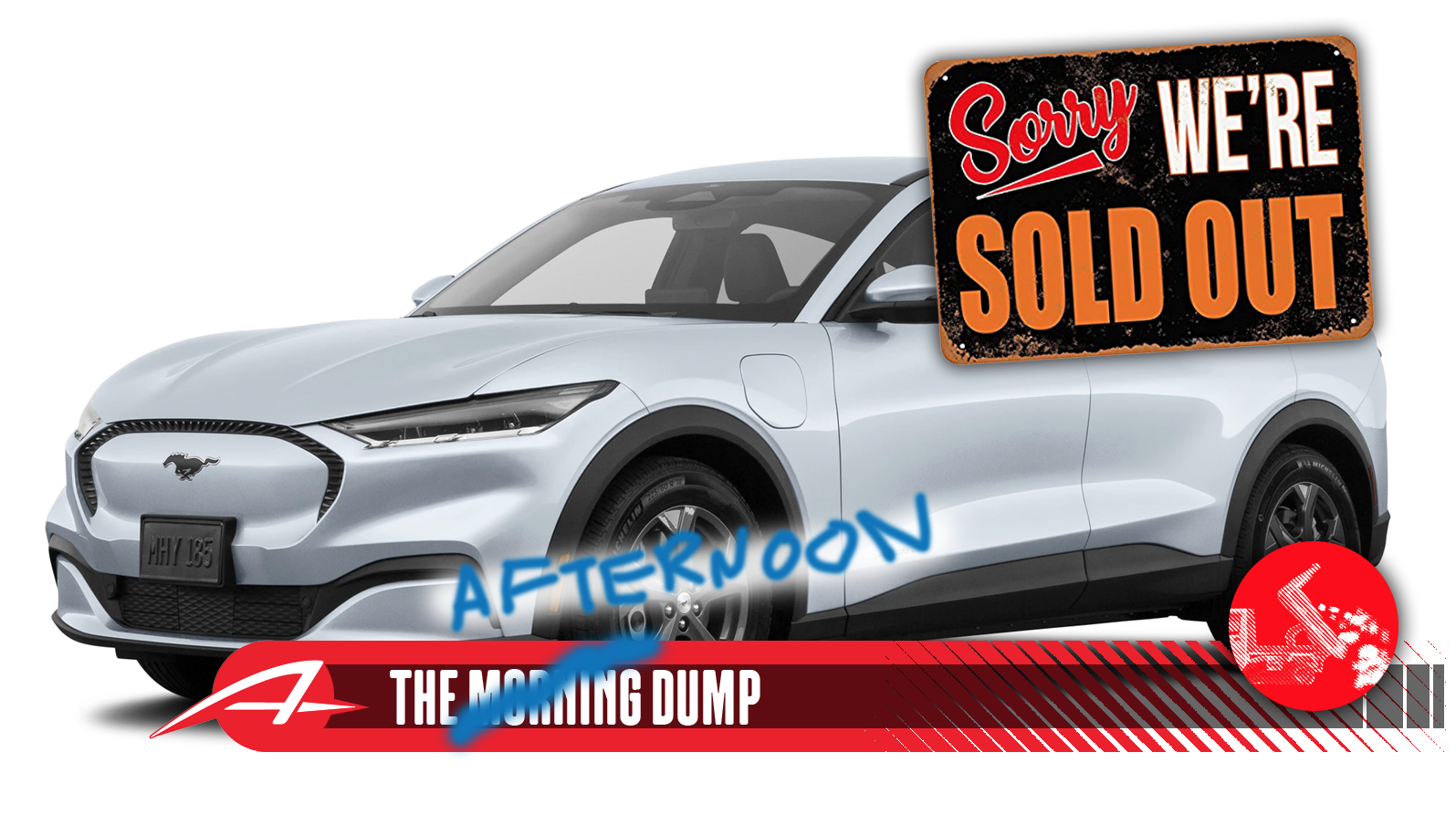 Mercedes is building the EQS SUV in Alabama, The Learjet is dead, a specialist firm reworks the big Healey. All this on today’s issue of The Morning Dump.

To say that Ford’s Mustang Mach-E electric crossover has been a success is a bit like saying Pompeii was a bit of a natural event. Like the Ford Maverick, the Mustang Mach-E is now officially sold out for the 2022 model year so Ford can use the whole Cuautitlan, Mexico plant to build up to 200,000 Mach-Es per year.

According to the Detroit Free Press, Ford closed the order bank for the 2022 Mustang Mach-E this week because it simply can’t keep up with demand. Sales of existing 2022 Mustang Mach-Es will continue until dealer stock is exhausted, with the order bank for the 2023 model reportedly opening up later this year. Start of 2023 model year production is expected this fall, with units arriving at dealers early next year. If you happen to be in the market for a Mustang Mach-E, you might want to hustle to the dealer posthaste. Otherwise, you could be waiting a while. Surprisingly, the shortage of Mach-Es is largely due to capacity limitations rather than supplier shortages. Ford had initially planned on building another electric car alongside the Mach-E, but demand is so strong that the other electric car will have to be built in a different plant. Honestly, if you’re making cars in 2022 and your only problem is insufficient factory capacity, you’re doing something right. 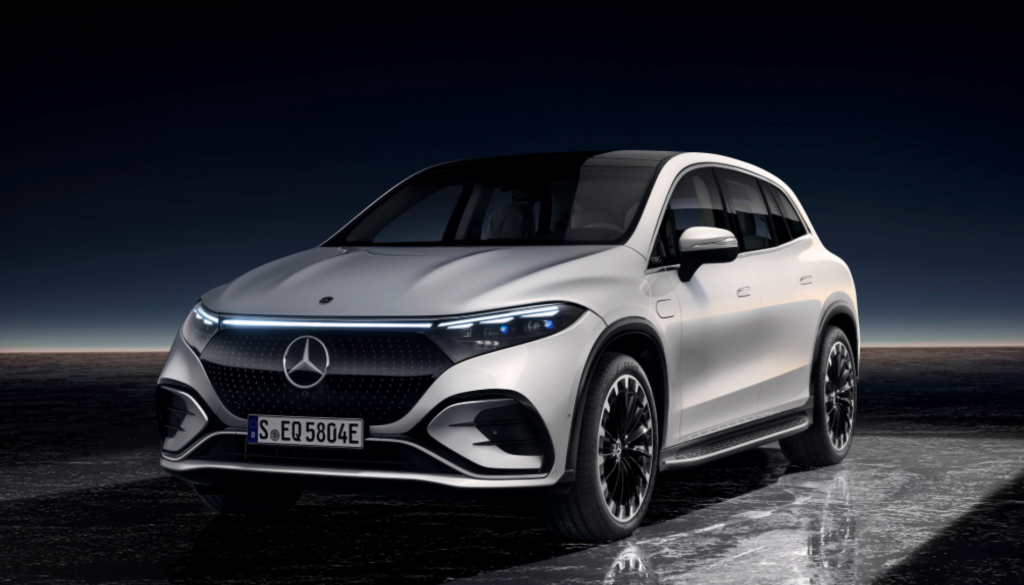 Mercedes-Benz has officially pulled the wraps off of its EQS SUV and the car is pretty much what everyone expected. Three rows of seats on the EQS electric luxury sedan’s platform, sharing that vehicle’s dashboard, wheelbase and powertrain range. It looks exceedingly generic, with neither the visual elegance of a Volvo XC90 nor the striking details of a Hyundai Tucson. The interior features many screens surrounded by a common black bezel and covered by a single sheet of glass, designed exclusively to pick up more fingerprints than a public washroom’s door handle. Look, I know that Mercedes has tried to do its thing with technology and aerodynamic design, but I just know in my mind that, at least when it comes to looks, the upcoming electric Range Rover is going to slaughter this thing.

However, the EQS SUV isn’t completely uninteresting. Instead of being built in a land that uses wonderful words like Gemütlichkeit and Kummerspeck, it’s built in the hometown of people like Otis Davis, Deontay Wilder and Dinah Washington – Tuscaloosa, Alabama. That’s right, the flagship EQS SUV is Mercedes-Benz’s only EQ-series electric vehicle to be built exclusively outside of Europe. Kind of a big deal, yeah? So why is the EQS SUV built in Tuscaloosa? Well, the Mercedes plant in Tuscaloosa has been cranking out SUVs for over a quarter of a century now, so it has the capacity for some truly large vehicles.

Of course, it helps that batteries for the EQS SUV come from nearby Bibb county, and that the whole thing is screwed together with the American market in mind. These are sound reasons for American production, especially considering Mercedes-Benz’s advanced production techniques. See, the EQS SUV isn’t built on a separate line from every other Mercedes-Benz SUV made in Tuscaloosa. Instead, adaptable robots and skilled humans can screw together an EQS SUV right after screwing together a Mercedes-Maybach GLS 600. Even the powertrain mating robots can raise a battery pack right after lifting a V8 into place. Brilliant stuff.

Of course, if you want to make a statement and don’t need a third row, the BMW iX is available now. If you prefer something more stately and wouldn’t mind extensively driving an Evoque service loaner, the electric Range Rover is on its way for 2024. However, if you’re in the market or a posh three-row electric SUV that looks a bit boring but likely won’t break all the time, the Mercedes-Benz EQS SUV is expected to go on sale in America this fall with worldwide deliveries at a slightly later date. Expect EPA range numbers to drop closer to the third quarter. Pricing for the EQS SUV hasn’t been announced, but don’t expect it to be a bargain.

The King Is Dead

It’s official, no more Learjets. It looks like the world’s wealthiest people may have to settle for a Gulfstream G700. We have an in-depth look at Learjet from Jason Torchinsky that went up earlier today, but here’s the headline of the moment: Northern Jet management took delivery of the last ever Learjet on March 28, marking an end to the marque’s 59-year history of building private jets.

Ah, the private jet. The perfect vehicle for anyone with far more money than time. Visions of rockstars and plutocrats of the world flying their Learjets to business meetings in Dallas or family time in The Hamptons dance around my head whenever someone mentions the name Learjet. James Brown had one, as did Frank Sinatra. The Learjet stood as a cultural aspiration. In a jet-setting, Hollywood-focused culture, who wouldn’t want to be sipping champagne at 51,000 feet? Noted philosopher Chad Kroger commented on this trend of conspicuous consumption in 2006, saying: “We all just wanna be big rockstars and live in hilltop houses, driving 15 cars.” Quite right, Chad. In any case, this does make for a slightly sad ending to the Learjet story. It’s going out not with a bang, but with a whimper. Still, the Learjet should remain a cultural icon for many years to come.

Everybody Wants To Rule The World

In 1985, Tears for Fears released a music video featuring a young Curt Smith piloting an Austin-Healey 3000 around Southern California, intertwined with shots of off-road trikes and a studio performance. Everybody Wants To Rule The World was a high water mark of ‘80s pop music cool, forever cementing the big Healey’s legacy in the minds of Generation X. Truthfully, the Austin-Healey 3000 wasn’t much different from the earlier 100-6, itself a sleeker long-wheelbase evolution of the four-cylinder Austin-Healey 100. Truthfully, it feels a touch overdue for an enhanced, Singerized version of the big Healey, so you can imagine my glee when I heard that Caton has stepped up to the plate.

Who’s Caton? They’re a new British company from the people behind the Jaguar XKSS recreation that plans on restomodding everything, not just vehicles. I’m glad I know who to hit up if I ever become a millionaire and want to retrofit Lincoln’s seat massage into an Eames chair. Still, their first major project is based on the Healey 100, and what a gorgeous thing it is. The original car’s four-cylinder engine has been punched out to three liters and thoroughly reworked to produce 185 brake horsepower and 195 lb.-ft. of torque. Rapid stuff in a car weighing only 920 kg. A new five-speed gearbox adds civility and flexibility while requiring a narrower central tunnel. That narrower tunnel combined with a special pedal box and bespoke seats means that the Healey by Caton can actually accommodate six-foot-tall drivers, an important thing in the modern age.

Elsewhere, the body has been refined with shaved bumpers and panels reworked over an English wheel for a seamless look. A new semi-frameless double-bubble windscreen and reworked gauges subtly take the car into the 21st century. The reworked suspension features some hectic camber up front and reworked dampers out back for an authentic yet improved chassis setup, while Bridge of Weir leather offers that classic aromatic old car smell. Perhaps more important than what’s on the Healey by Caton is what isn’t. There’s no roof, no stereo, no power steering. The steering wheel is still wood-rimmed, fuel is still sent through carburetors, the tires are still reasonably skinny and the front dampers are still an old-school lever design. The Healey by Caton still appears to capture all the authenticity of a vintage British sports car. Of course, vast improvements and impressive authenticity don’t come cheap. Top Gear reports that pricing starts at £395,000, or just over $513,000 at the time of writing. As such, only 25 of these upgraded big Healeys will be made. To paraphrase another Gen X pop culture icon, if you have the means…

Whelp, time to drop the lid on today’s edition of The Morning Dump. If you could give the tasteful, money-no-object restomod treatment to any classic car, what would it be? Personally, I’d put the 333-horsepower S54B32 inline-six and six-speed manual gearbox from an E46 BMW M3 in a BMW E9 coupe from the early ‘70s. Rework the suspension, add some period-correct Recaro seats, a wood steering wheel, decently strong headlights and a discrete hi-fi system, and paint it Fjord Blue. It’s definitely not for everyone, but I feel like I’d absolutely adore it. I’d love to hear your picks and hypothetical plans in the comments.

Thomas is a Nu Rave-blaring, heel-toe downshifting, maple syrup-swilling, chassis-geeking, junkyard parts-hauling, floppy-haired scenester who's been writing about cars since college. His current ride is a 2006 BMW 325i with the six-speed manual gearbox. Instagram: @thomas.hundal Twitter: @thomashundal
Read All My Posts »
PrevPreviousThis Nerdy Wrencher With A Small YouTube Channel Is The Ultimate Jeep Guy And We Need To Give Him The Credit He Deserves
NextWhy China Developed These Weird Tesla Accessories That Elon Would HateNext