Are you familiar with the sexual practice known as “edging?” You pretty much live on the internet, like all of us do, so I bet you have some idea of what this is. Essentially, it’s about prolonging a particular sensation as long as possible, delaying, um, completion as long as you can. That sort of feels like what VW has been doing with their resurrected and electrified Type 2 Microbus, of which prototypes and examples have been trotted out by VW for over 20 years. 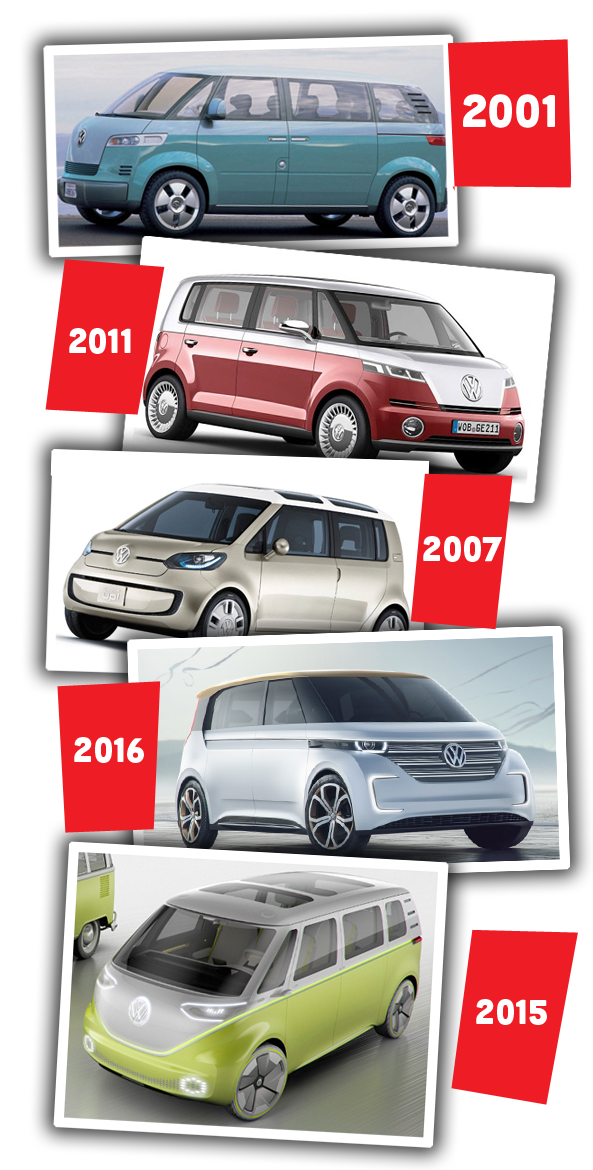 I mean, look at this: modernized buses since 2001, teasing us over and over, with each new revision.

I’d also like to note that I was pushing for VW to introduce a new electric bus as early as 2015, since I saw it as VW’s best chance to get a favorable reputation back after the whole Dieselgate fiasco.

I’m going to quote myself here, and you can’t stop me:

“Volkswagen has been developing electric vehicles for a while now, and the e-Golf is already available. A purpose-built EV platform like a new EV Bus would allow for packaging efficiencies like Tesla-style floor/chassis-mounted batteries and would work especially well for the packaging of a big box like the Bus. VW has the technology to do this already.

It has to be the Microbus because a New Beetle-style modernized bus has been hoped for by a large spectrum of potential VW customers — and it’s a set of people that goes beyond the usual car-enthusiast crowd. It’s an iconic vehicle with a large reservoir of nostalgia and goodwill; it could have appeal to old people who remember the original and young people looking for something novel, with character.”

The chain of concepts ended with that 2017 ID Buzz, which I quite liked, in show-car form. The translation from concept to production isn’t easy, but I think VW pulled it off remarkably well, considering all of the significant hurdles that a production car brings.

Also, no grayish tires, which is a shame, too. Let’s take a look at some of the big differences between the concept and the production ID Buzz: 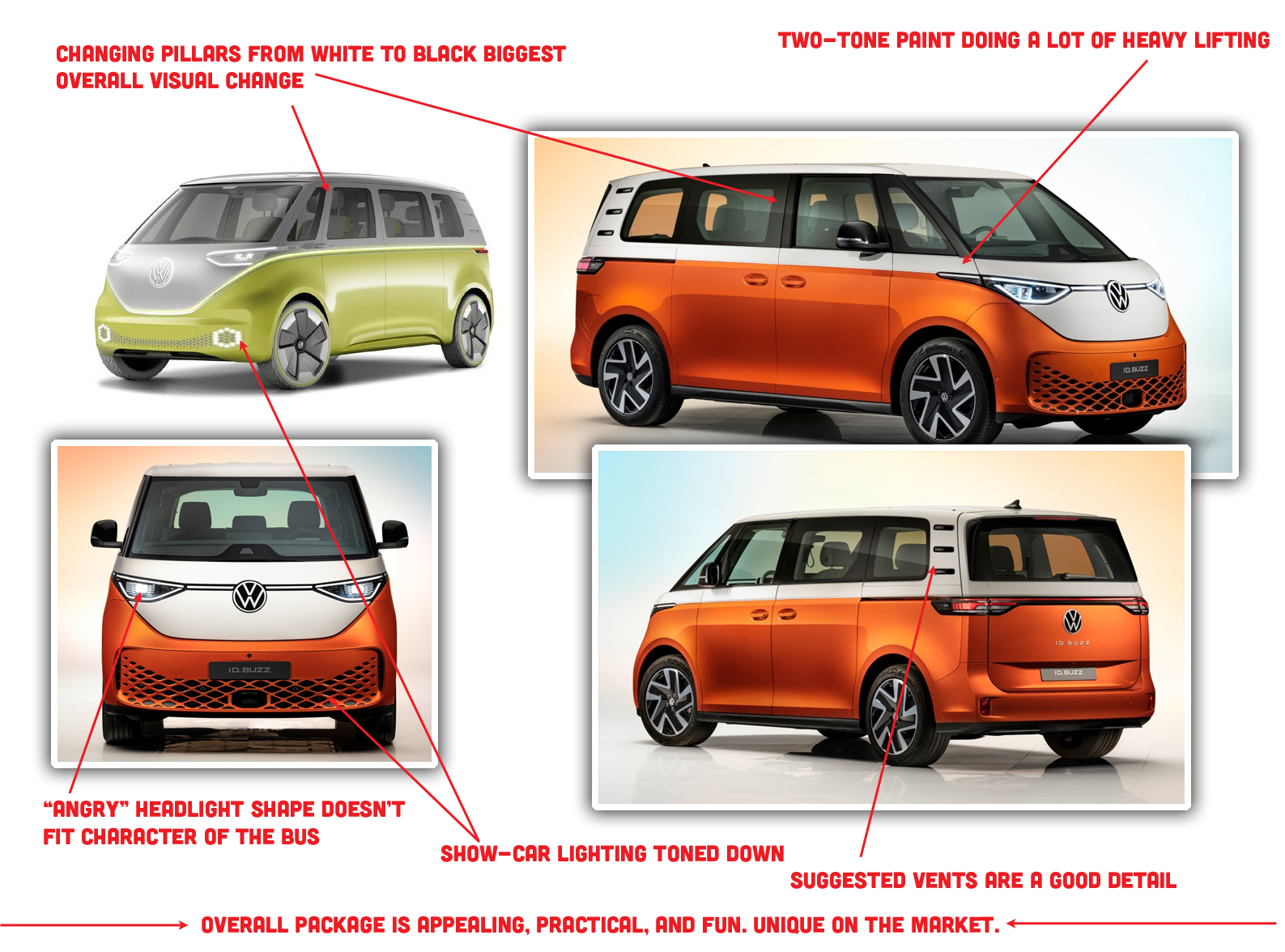 Overall, I think VW has pulled it off really well; they’ve made an EV that currently has no real counterpart in the market: a practical and fun electric van, a real van, is pretty much a category of one at the moment, and I think this should prove to be a really attractive alternative to some boring-ass crossover or SUV.

To capture the feel of the original, iconic Microbuses, VW leans heavily on that two-tone paint job to do the work, but, let’s be honest, it always was a game-day player in VW Bus design, contributing a lot to the iconic look. Plus, the colors shown are real colors, vibrant and bright and unashamed, and that alone is novel in the modern, boring grayscale carscape.

Painting the pillars black instead of white or body color is, I think, the biggest single visual departure from the concept, and I’m not sure I like it. It was the safe call, as nearly all modern cars do this, and does make the bus look a bit more sleek.

But do we want the bus to look sleek?

I think the white pillars of the concept convey the original bus’ character better. The same reasoning seems to be behind VW sticking with modern, pissed-off looking headlamps instead of friendlier, more welcoming round lights per the original. Contemporary auto design seems to dictate that all cars must look, at least to some degree, like they’re sick of your shit, and I suppose VW felt they needed to play it safe there.

Maybe there will be aftermarket light kits to let these buses look happier. 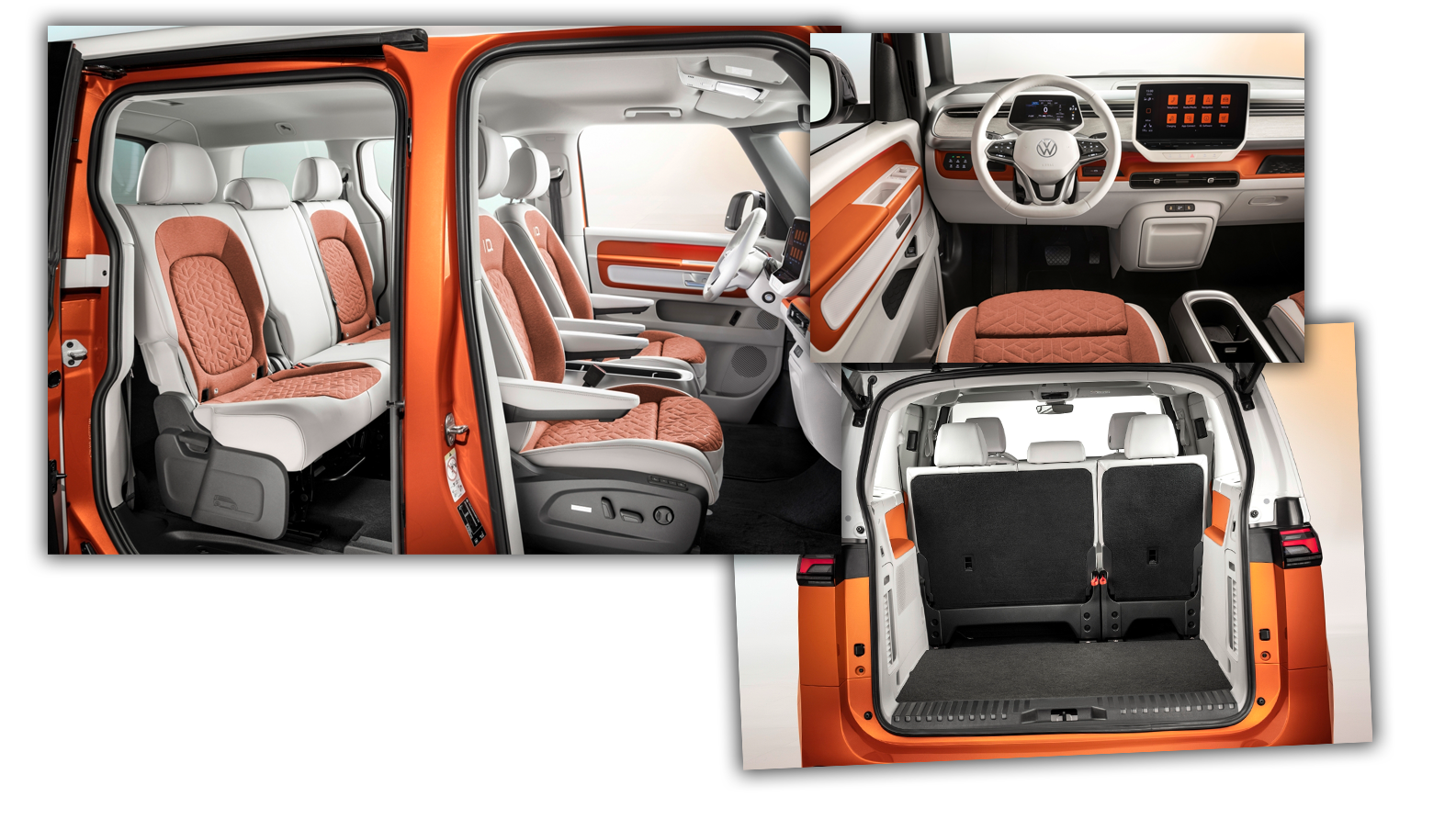 The interiors look good, too: extremely roomy, as you’d guess from what is essentially a massive box, and good use of color on the inside. For vehicles that likely will be hauling families with kids and people likely doing all manner of questionable things inside them, I sure hope that white upholstery is able to be easily cleaned, though.

I’m also curious to see how those seats fold down; can they go totally flat, so you can sleep in this? I’d hope so.

The cargo version works well, too–perhaps even better, because it avoids much of the pillar-blackening issue. While there are a few other electric cargo vans out there, I think the ID Buzz can do really well in this space, because it’s inherently visually interesting, and has plenty of custom branding room on the sides.

Considering how the road from concept to production tends to be a well-oiled de-interestification machine, I think VW managed the transition remarkably well; I’m curious to see what the price and range of it will be, as those will be significant factors in how well it does. We won’t get it in the US until 2023, but I don’t think it’ll differ much from this Euro-spec one that was shown.

I'm a co-founder of the Autopian, the site you're on RIGHT NOW! I'm here to talk to you about taillights until you cry and beg me to stop, which I absolutely will not. Sorry. Hug? Also, David's friend.
Read All My Posts »
PrevPreviousThe Autopian Is Live! And We Want Your Feedback
NextNissan Finally Gets Off Its Ass And Develops Anti-Soup-Spilling TechNext