Volvo was one of the first carmakers to really embrace safety as a selling point, something that was counter to how most carmakers saw things back in the day. Lee Iacocca, the father of the Ford Mustang, Pinto, and the man who saved Chrysler, was famously quoted as saying “safety doesn’t sell.” Maybe it didn’t sell K-Cars, but it sure as hell sold Volvos, and the Swedish carmaker really leaned into advertising that reflected this. The brand had a flair for drama, too, as you can see in this one ad I happened to come across — a striking and genuinely weird ad with an even stranger backstory. The original plan was to stick a baby under that car, at least according to the lore around the ad.

Let’s look at some Volvo ads over the past few decades, just to get a sense of what they were up to. 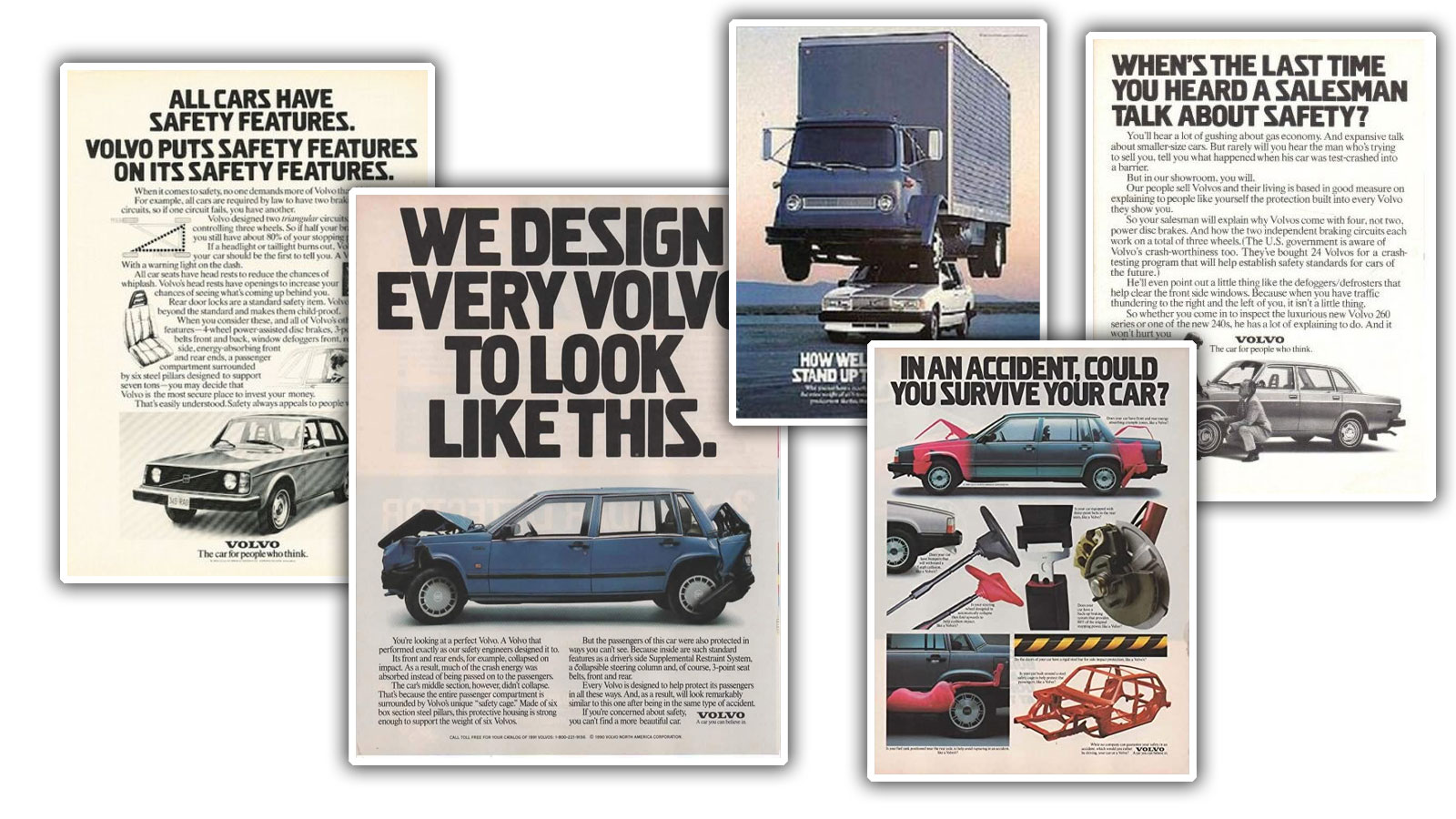 As you can see, Volvo enjoyed showing how strong its cars were, how much they could withstand, and how much abuse they could take — presumably in lieu of your soft, pliant, fuzzy body.

If you know a bit about this history of car advertising, you can likely sense a lot of influence from Dole Dane Bernbach’s (DDB) famous 1950s to 1960s Volkswagen ad campaign, one of the most influential ad campaigns for anything, ever. There are the simple layouts, white backgrounds with un-glamorous photos of the car, honest copy that was quietly witty and treated the reader like an intelligent friend, not some mark to be separated from their money.

One of the people who worked on this legendary DDB Volkswagen campaign is actually the guy you see laying under that dangling car up there — a highly respected British ad man named David Abbott. This is the ad I want to talk about, so let’s show the whole thing: 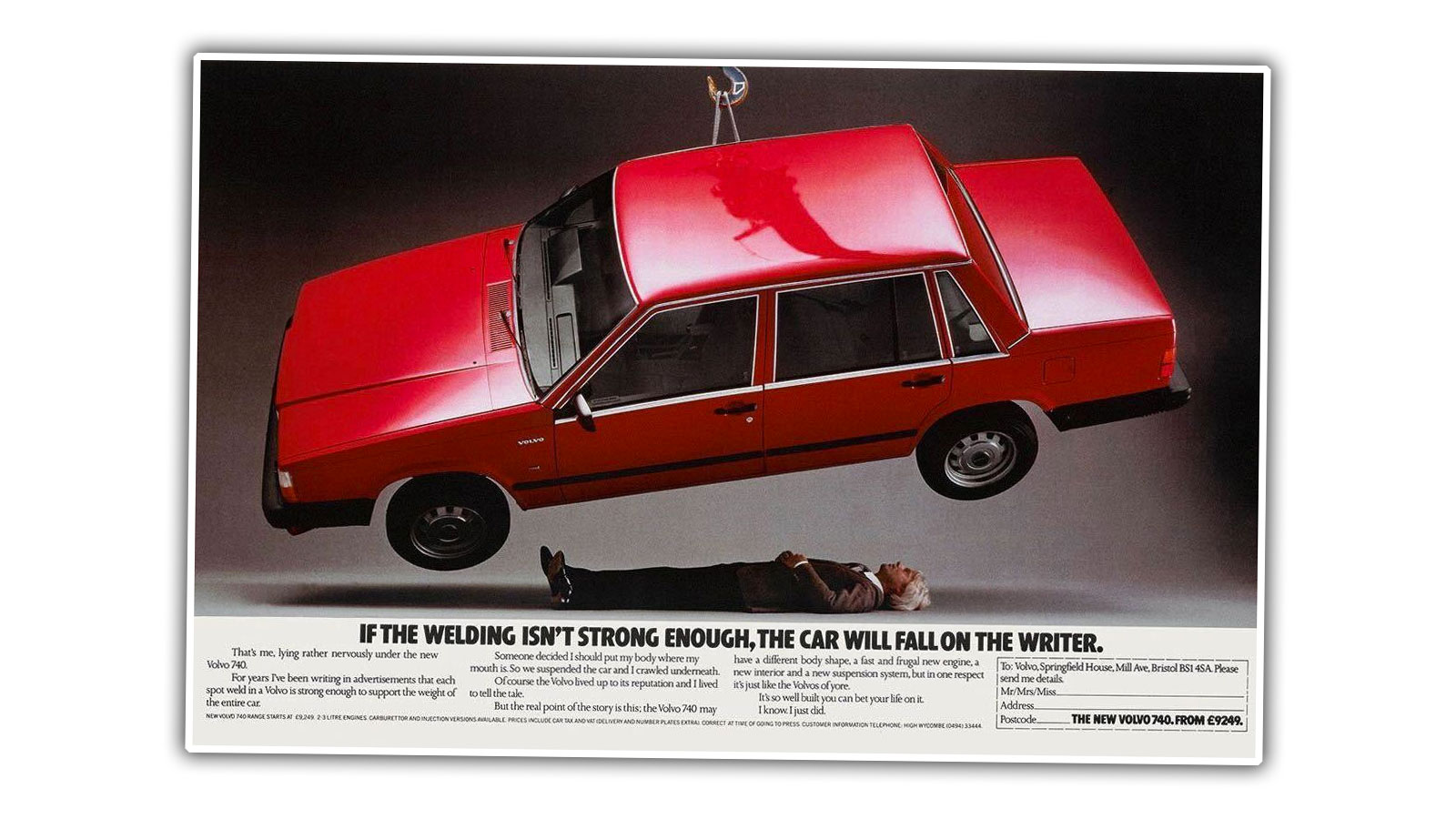 The premise is pretty simple, and very visual and visceral: Volvo has been claiming how strong its spot welds are, that each is strong enough to support the entire car’s weight, so here Volvo is proving it in this ad by hanging a Volvo 740 over a person who happens to be the person who wrote the ad copy.

Here’s what the first bit of the copy says:

IF THE WELDING ISN’T STRONG ENOUGH, THE CAR WILL FALL ON THE WRITER

That’s me, lying rather nervously under the new Volvo 740.

For years I’ve been writing in advertisements that each spot weld in a Volvo is strong enough to support the weight of the entire car.

Someone decided I should put my body where my mouth is. So we suspended the car and I crawled underneath.

It’s a strange ad for a lot of reasons. It’s extremely rare to see the ad’s copywriter in the ad itself, first, and I suspect even rarer to see them potentially in mortal danger. Even weirder is the story that the original idea was to have the welder’s baby under the car, which sort of would have made Volvo seem like some cruel medieval despot holding his court alchemist’s child in a dungeon unless he could turn a pile of sawdust into gold.

Then, it seems a Volvo engineer was pitched (and/or possibly the welder themself?) and also rejected, until the guy coming up with all the ideas to stick people under a suspended car finally had to just step up and volunteer himself. As far as I can tell, everything we see in the ad appears to be true; I’ve found no suggestions that the image was faked or anything like that.

As Paul Belford, of an award-winning U.K. ad agency that bears his name, tells us in a post on his website about this famous ad:

Apparently the original idea was to have the welder’s baby beneath the car. Client said no. Then a Volvo engineer. Still no. So David did it himself.

What a memorable way to show a big, client friendly, studio shot of the car.

Interestingly, there’s no logo on this ad… oh, actually there it is, on the car. Not exactly huge is it? Maybe it doesn’t need to be. Because the idea is so good and the product has such a distinctive shape. Yes, perhaps the product itself serves as a logo here. And what about the endline? Where is it? Pretty much every dot of ink on this ad is dramatising the proposition of ‘safety’. Do we really need to repeat that in an endline? No. It would add nothing but clutter. Instead we simply have the product name and price.

The baby-under-the-car claims aren’t the kind of thing that seem to be on any official record (seems like the kind of suggestion you may not want to write down), but the story shows up in multiple places, and from people with real knowledge of the ad industry.

It looks like the car is being supported by the B-pillar, which must be welded to the roof structure. That’s generally a pretty stout weld on most cars. I’d hope that, if that weld were to have broken, Mr.Abbott would have heard some telltale metal creaking and tearing and been able to roll out of the way of the dropping 3,000 pounds of Swedish Iron, but, luckily, it never came to that.

It’s a ballsy ad, that’s for sure, and it grabs your attention and demands that you acknowledge that a Volvo 740 must, at the very least, not be a flimsy hunk of crap.

I wonder if a modern carmaker would consider doing a similar ad? I suspect most modern cars would be able to pass this test just fine, but, if I was a copywriter, would I do it? I think so? Seems a pretty safe bet, especially when you remind yourself that Tesla does no advertising, so you don’t have to worry about, you know, all that.

I'm a co-founder of the Autopian, the site you're on RIGHT NOW! I'm here to talk to you about taillights until you cry and beg me to stop, which I absolutely will not. Sorry. Hug? Also, David's friend.
Read All My Posts »
PrevPreviousSub-$1000 Cars That Actually Run: Subaru Legacy vs Hyundai XG300
NextFord Holds Its Horses With A Stop-Sale Order And Recall For Its Mustang Mach-E Electric CrossoverNext