The Abarth 500e might just be the worst-kept secret the automotive world has seen in years. Not only had Abarth issued a litany of teasers, the full car managed to leak an entire week before its official reveal. However, that doesn’t mean there isn’t still reason to be interested. Judging by prior Abarth sales in America and future plans for a U.S.-spec 500e, this tiny electric hot hatch stands a chance of making it stateside. Without further ado, let’s dive into the Abarth 500e to see what makes it tick. 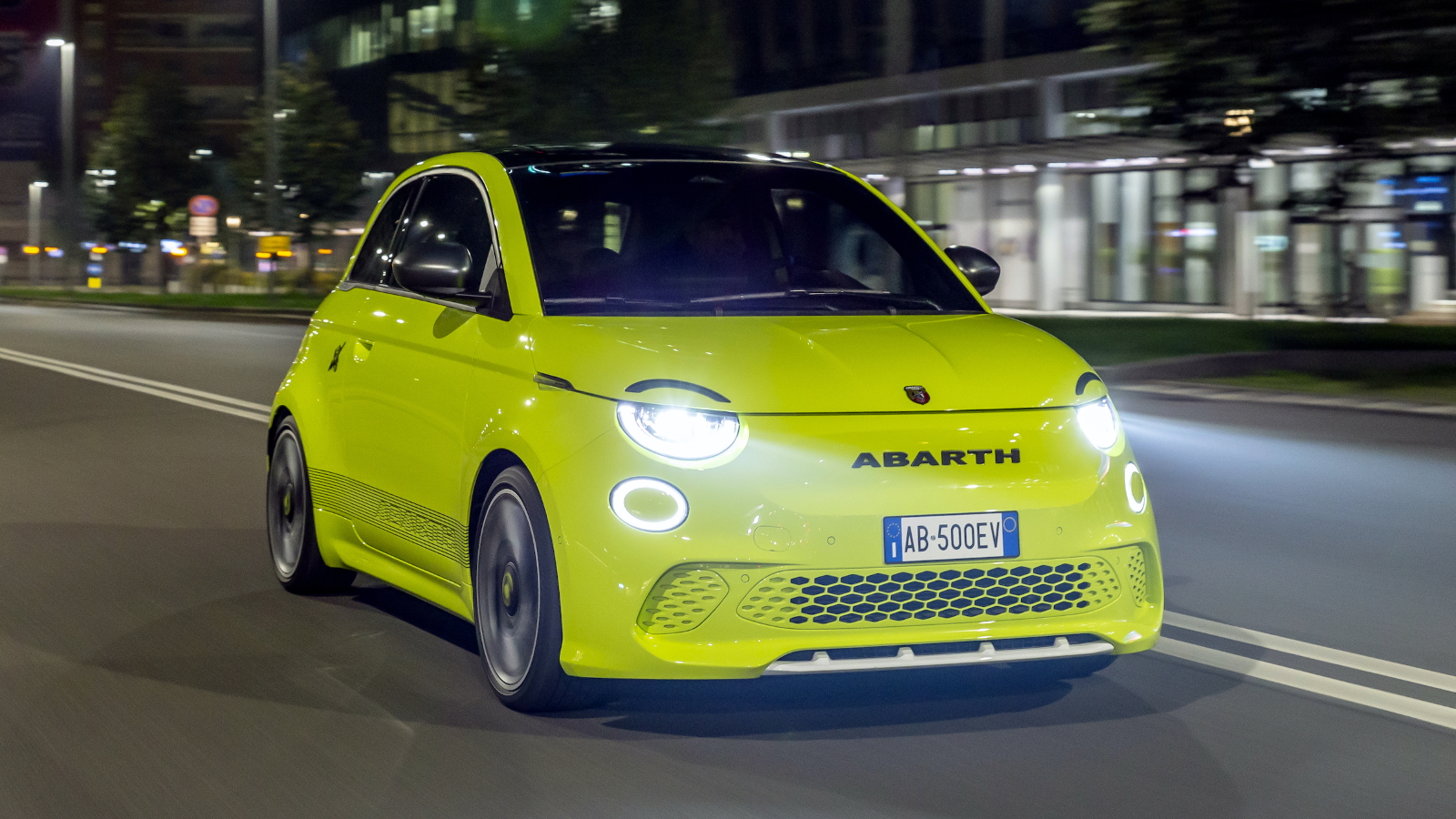 Thanks in part to a 42 kWh battery pack, the Abarth 500e puts out 155 horsepower and 173 lb.-ft. of torque. That might not sound like massive output, but the way electric vehicles put power down means that the new Abarth 500e should be quicker than the old gasoline-powered model. Abarth figures its new car can run from 25 mph to 37 mph in just a second and a half, good stuff for quickly punching out of corners. In addition, Abarth claims that the location of the battery pack results in improved weight distribution and handling.

As with the 500 Abarth of old, the Abarth 500e’s output depends on which drive mode is selected. Keep it in Turismo and you’ll only see 134 horsepower and 162 lb.-ft. of torque as opposed to full whack in either Scorpion mode. Still, base output seems like stout numbers for most A-segment cars, but that’s assuming a low curb weight. While Abarth hasn’t released the 500e’s weight, the regular Fiat 500e weighs 3,009 pounds. That’s 103 pounds more than what Honda quotes for a Civic Si, but a back-to-back scale test is likely required to offer a definitive judgment. 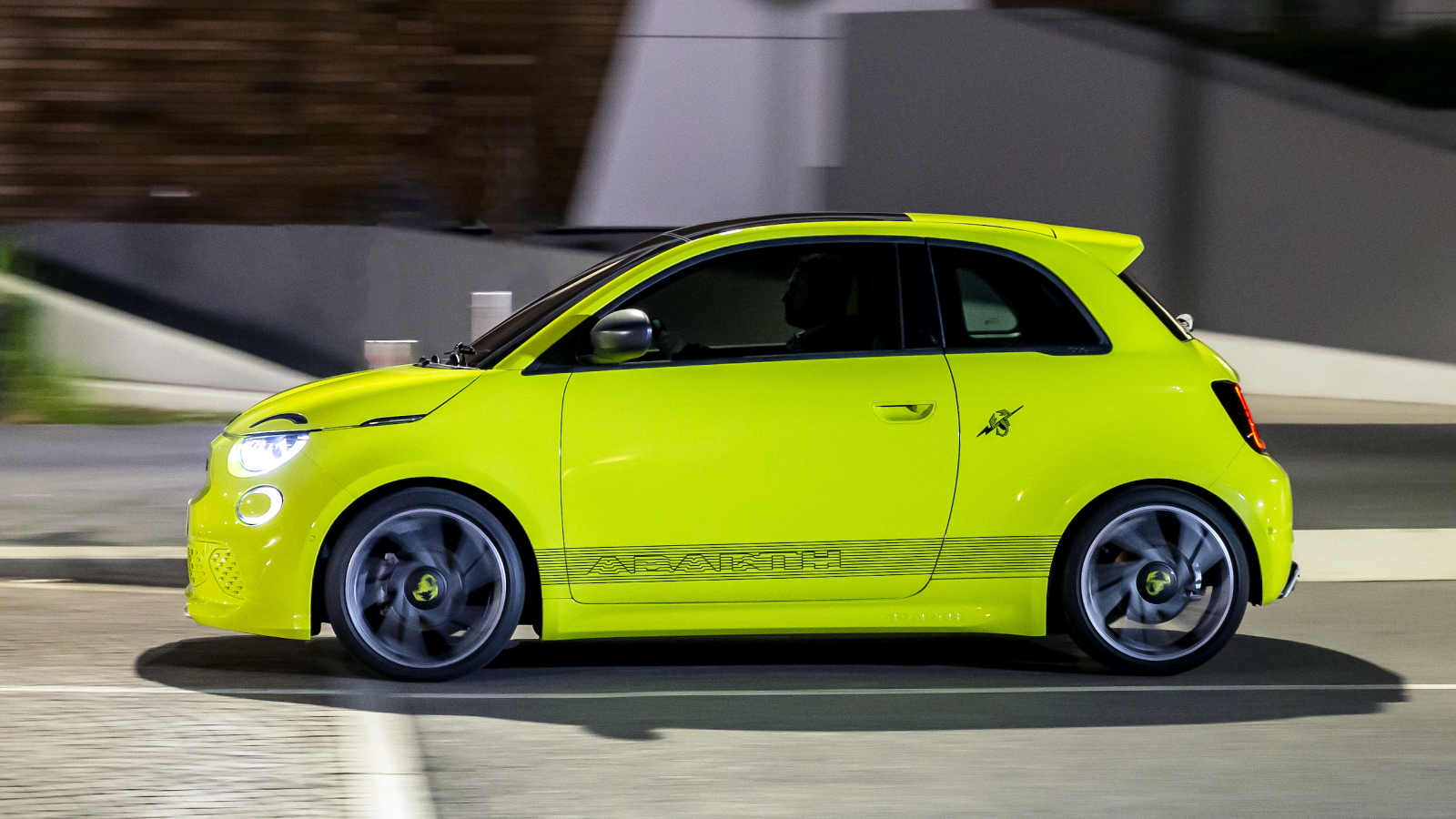 On the outside, Abarth has chosen to show off the 500e in a sort of Nuclear Kermit green that’s mildly uncomfortable to look at. It’s like it got gunged at the Nickelodeon Kids’ Choice Awards. However, once you either love or get past the paint and ignore the Abarth wordmark in one hundred and eleventy point font across the car’s nose, Abarth’s styling revisions seem quite agreeable. The deep front air dam and chunky side skirts do a proper job of playing up hot hatch heritage, while fresh alloy wheels adopt a directional pattern. While previous Abarth 500s featured two massive cannons on the rear bumper, this electric model uses a bit of white diffuser-look trim to break up the rear valence while coordinating with the front fascia.

All electric vehicles must come with a pedestrian warning system but Abarth has put a unique twist on its external noisemaker. When the Abarth 500e hits 12 mph, the standard eerie hum transforms into what the marque calls a “strumming guitar.” Given the boisterous demeanor of previous Abarth 500s, I’m expecting metalcore chugs that make you want to chug Monster Energy and make a wall of death. If a spot of guitar isn’t enough, Abarth will also offer the 500e with a sound generator that makes fake engine noises. 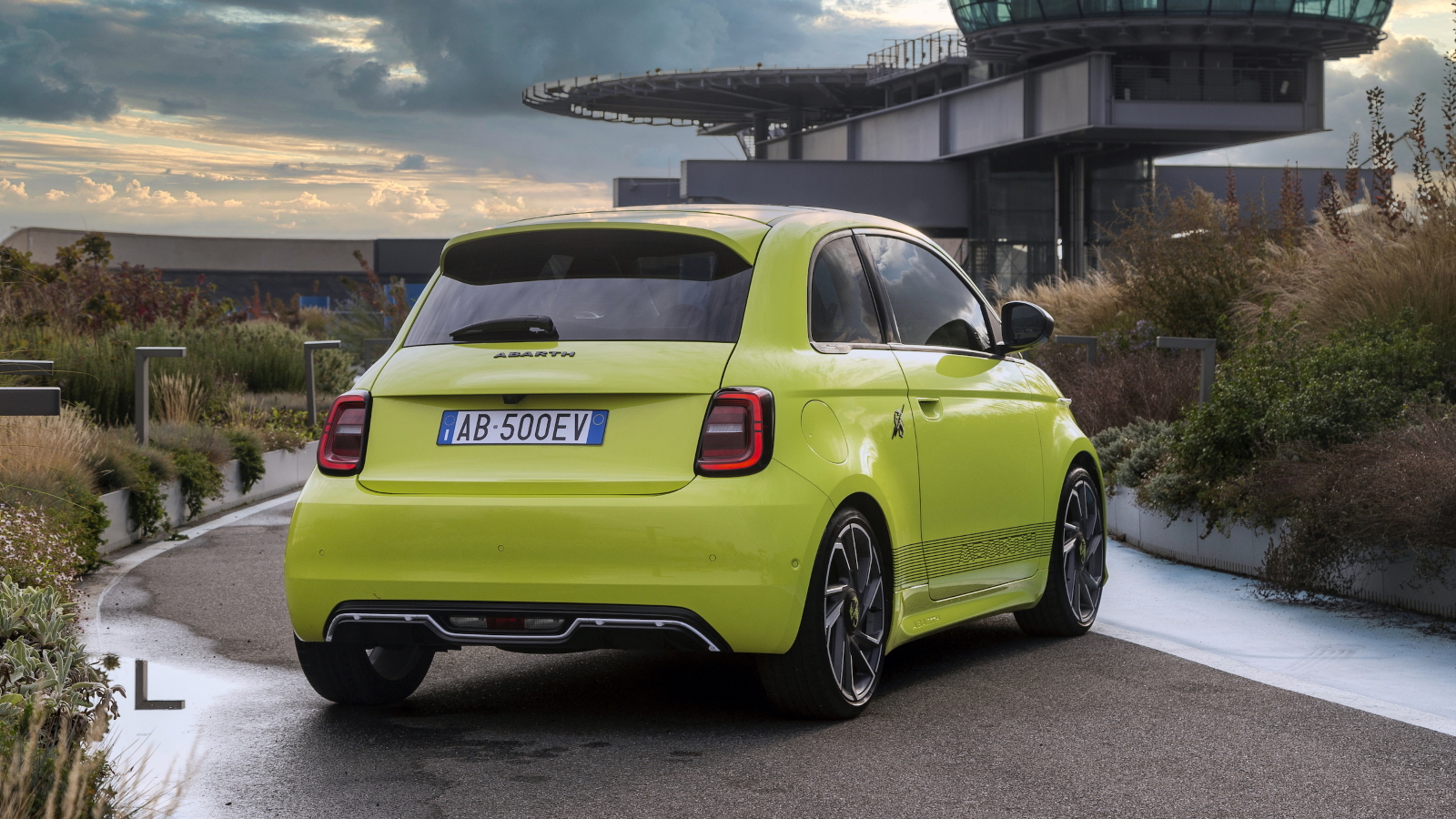 While the Abarth 500e seems to offer superior objective performance to the old dino-burning 500-based Abarth models, I have my reservations on how well it will embody the spirit of old. The 500 Abarth Americans are familiar with felt like a beer can full of the world’s angriest bees. It would snort and shout and pop like a lout, goad you on into driving harder, and annoy just about every neighbor. Sure, it wasn’t the fastest hot hatch in the pack, but it made 40 mph feel like a million. Upon first glance, the new car doesn’t seem nearly as antisocial. However, that doesn’t mean I wouldn’t love to have a go in it. After all, if the future of cars is electric, the fact that hot hatches may still exist is certainly a warm one.

All photos courtesy of Abarth

Thomas is a Nu Rave-blaring, heel-toe downshifting, maple syrup-swilling, chassis-geeking, junkyard parts-hauling, floppy-haired scenester who's been writing about cars since college. His current ride is a 2006 BMW 325i with the six-speed manual gearbox. Instagram: @thomas.hundal Twitter: @thomashundal
Read All My Posts »
PrevPreviousTen Car Detailing Products To Make You Skip The Armor-All Gift Pack This Holiday Season – Autopian Gift Guide
NextParts Bin Puzzle: Can You Guess The RV From The Movie ‘RV’?Next