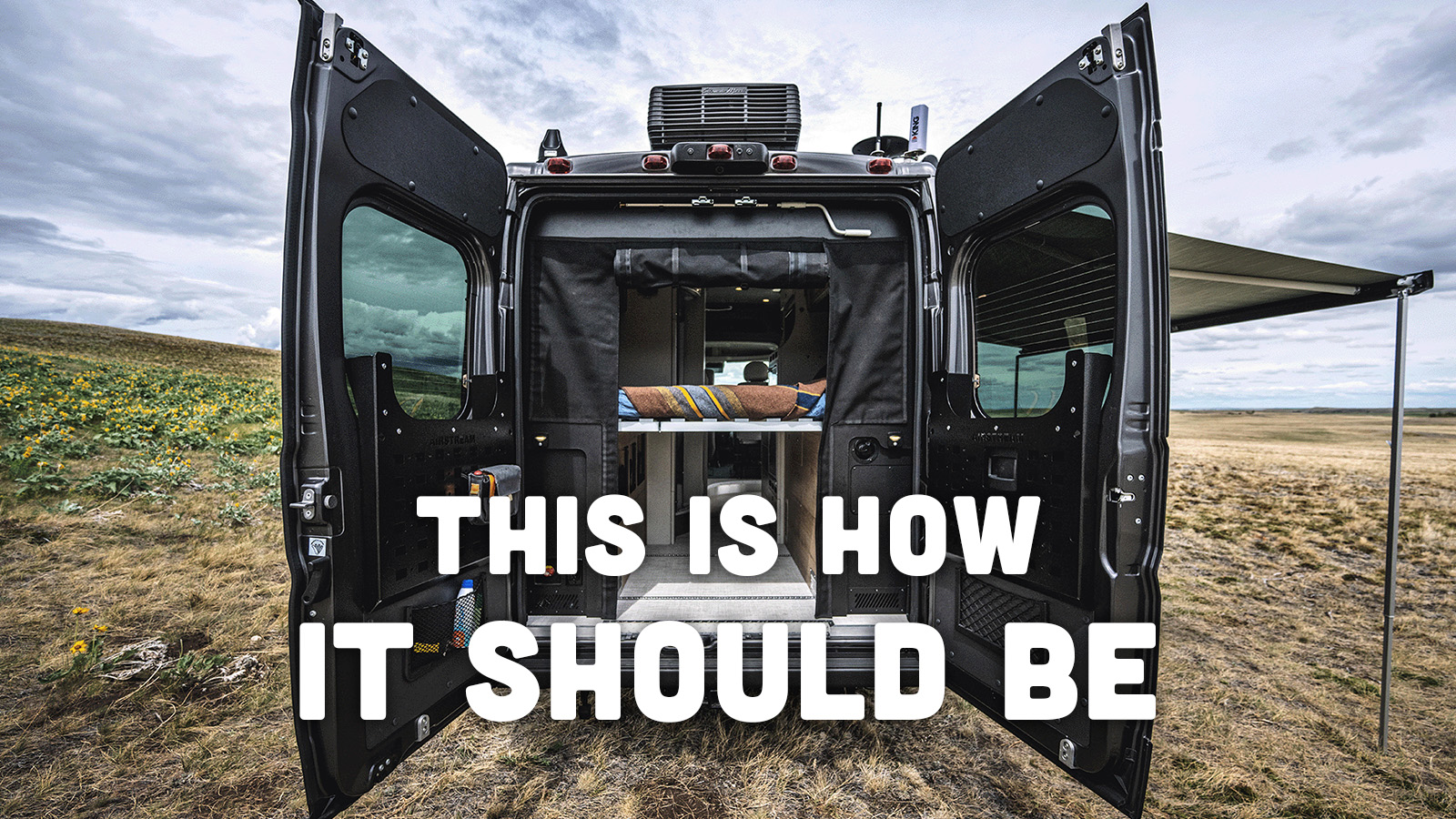 Airstream’s clearly been spying on me because the just announced Airstream Rangeline Class B van-based RV is exactly the vehicle I’ve wanted them to build and they even made it for a reasonable price. Is this the best RV you can buy? Maybe!

There’s no best camper or RV for everyone because everyone has different needs. A giant Class A diesel pusher isn’t a great choice for a young couple who wants to #vanlife at national parks in the same way that a family of eight probably isn’t going to be comfortable in a Toyota Townace. What the Rangeline gets right, at least for me, is combining the best of what the Airstream Interstate offers in a package that works better for people with families.

Let’s start with what it is: A Ram ProMaster 3500 van converted into an RV with a fold-out bed in the rear and an optional camper top. This is a 21-footer with Ram’s 3.6-liter Pentastar V6 upfront producing a reasonable 276 horsepower. The transmission is the Ram’s TorqueFlite nine-speed automatic and power is put down only through the front wheels.

There are plenty of ProMaster-based RVs, but none of them are Airstreams and that’s important. The Mercedes Sprinter-based Airstreams are extremely nice with a fit-and-finish that’s more luxury yacht than manufactured home. I’ve always found the soft-closing drawers and locking cabinets to feel better than anything from any of their competition. Airstream is the brand it is because it gets the details right.

There are three problems with the Sprinter-based Airstreams if you are not a wealthy retired couple:

The new Rangeline solves all of these problems, with varying degrees of success.

Because the ProMaster is front-wheel drive it means there’s no pesky driveshaft getting in your way, which allows for a low floor and a big open space for designers to go to work.

The interior layout of the Rangeline is ideal for a family with 1-2 kids. Combining what works with modified #vanlife rigs and what they’ve learned from building touring coaches, Airstream’s added a two-seat bench behind the driver and passenger with a shower/bathroom combo on one side and a galley on the other. This isn’t impossible with a Mercedes Sprinter (The Roadtrek CS Adventurous sort of does this) but it’s easier with a ProMaster. For reference, the Hymer Aktiv also offered a similar setup, but Hymer is no longer in the United States.

If you’ve got a small child you could get away with the non-pop up tent version for a while, but eventually that kid’s gonna grow so for an extra $11,694 it seems like a no-brainer and makes it more capable than any of the Interstates.

There are a bunch of smart features here as well. The Rangeline doesn’t use a propane tank so if you’re away from shore power there’s a 2.8 kW generator that draws fuel from the van’s gas tank. There’s also a 270 Ah lithium battery bank with a 2,000-watt power inverter. No propane means no propane stove and instead an induction stovetop. The kitchen also features the standard microwave and small fridge/freezer. The availability of cheaper lithium batteries, I think, will start to make propane less of a necessity for RVs. At least I hope.

So what about heating up water or the van itself? Yet again, a smart solution: A hydronic heating system pumps hot water through the interior or into the shower/sink on demand and also uses the vehicle’s gas tank.

As an added bonus, the water hookup is concealed behind an external panel and the water/sewer hookups are hidden underneath the vehicle. To make the van even stealthier, the company’s painted the grille black.

And what does all this wonderfulness cost?

The shorter Airstream Interstate 19 only sleeps two and costs $200,681! A similarly equipped Winnebago Solis is $151,488 and I’m not sure if it’s as nice (though I need to drive one). A used Hymker Aktiv 2.0 can be had for a little over $100,000 if you’re looking for a deal, but I don’t think it’ll be as nice inside as the Airstream or as fully featured.

The only way this doesn’t feel like a value is when you consider that, in Europe, Hymer (which shares a parent company with Airstream) offers the shorter Hymer Free van for $61,450 before taxes and it has a similar layout. Feel free to move to Frankfurt to enjoy the savings.

Overall, though, this is perfectly in the sweet spot of what I want out of an RV and I’m just gonna have to go donate some blood or something to make room for it.

If this seems too price-y for you, VanLab has a way to DIY your own van and it starts under $5,000.

A DIY Solution For Under $10

Howdy! I'm the Publisher of The Autopian which means I'm to blame for at least a small part of this. I used to run another car site and then made movies and TV shows. Now I'm here to convince you to buy a Peugeot.
Read All My Posts »
PrevPreviousThe Ferrari Purosangue Is Ferrari’s First Ever SUV And It’s Got A V12 And Suicide Doors
NextHere’s Why Car Wheels Are So Flat These Days (And No, It’s Not Just Aerodynamics And Styling)Next