I imagine the past couple decades of Porsche and Maserati and Bentley and Lamborghini and even Lotus SUVs have adequately prepared us for this day: A Ferrari SUV. Maybe the idea of it still sounds kind of a like a joke, but it’s definitely no joke. It’s the Ferrari Purosangue and it’s got a front-mid-mounted 6.5-liter dry-sump V12 making 715 horsepower/528 lb-ft of torque, along with some really cool rear suicide doors. For an SUV, this thing sure does look Ferrari-ish, at least. 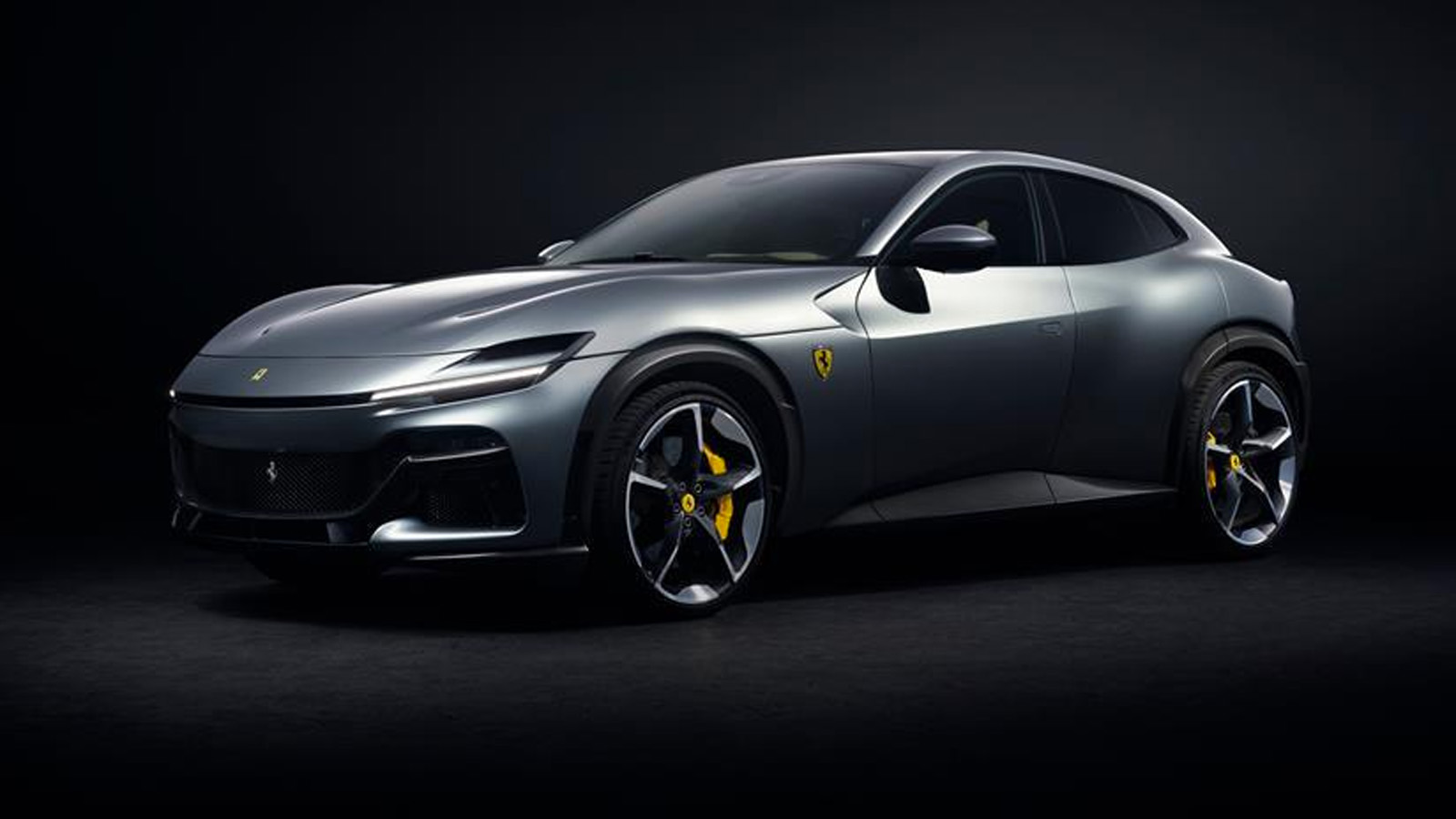 But before you think that Ferrari is absolutely comfortable and secure with their decision to sell SUVs in exchange for money, they do offer a bit of only very faintly defensive justification for why they’re building such a car, referencing some of their history:

Since the marque’s earliest years, 2+2 cars (i.e. with two front and two smaller back seats) have played a significant role in its strategy. Many Ferraris have made combining benchmark performance with first class comfort one of the pillars of their success. Now, in the culmination of 75 years of leading- edge research, Ferrari has created a car that is unique on the world stage: not only do performance, driving pleasure and comfort coexist in perfect harmony, but it is also a peerless encapsulation of the Prancing Horse’s iconic DNA. This is the reason why the name Purosangue, Italian for ‘thoroughbred’, was chosen.

See? It’s just another 2+2, really! And who said Ferraris can’t be comfortable? And so what if Purosangue literally translates to a creepy-sounding “pureblood?” It looks fantastic! 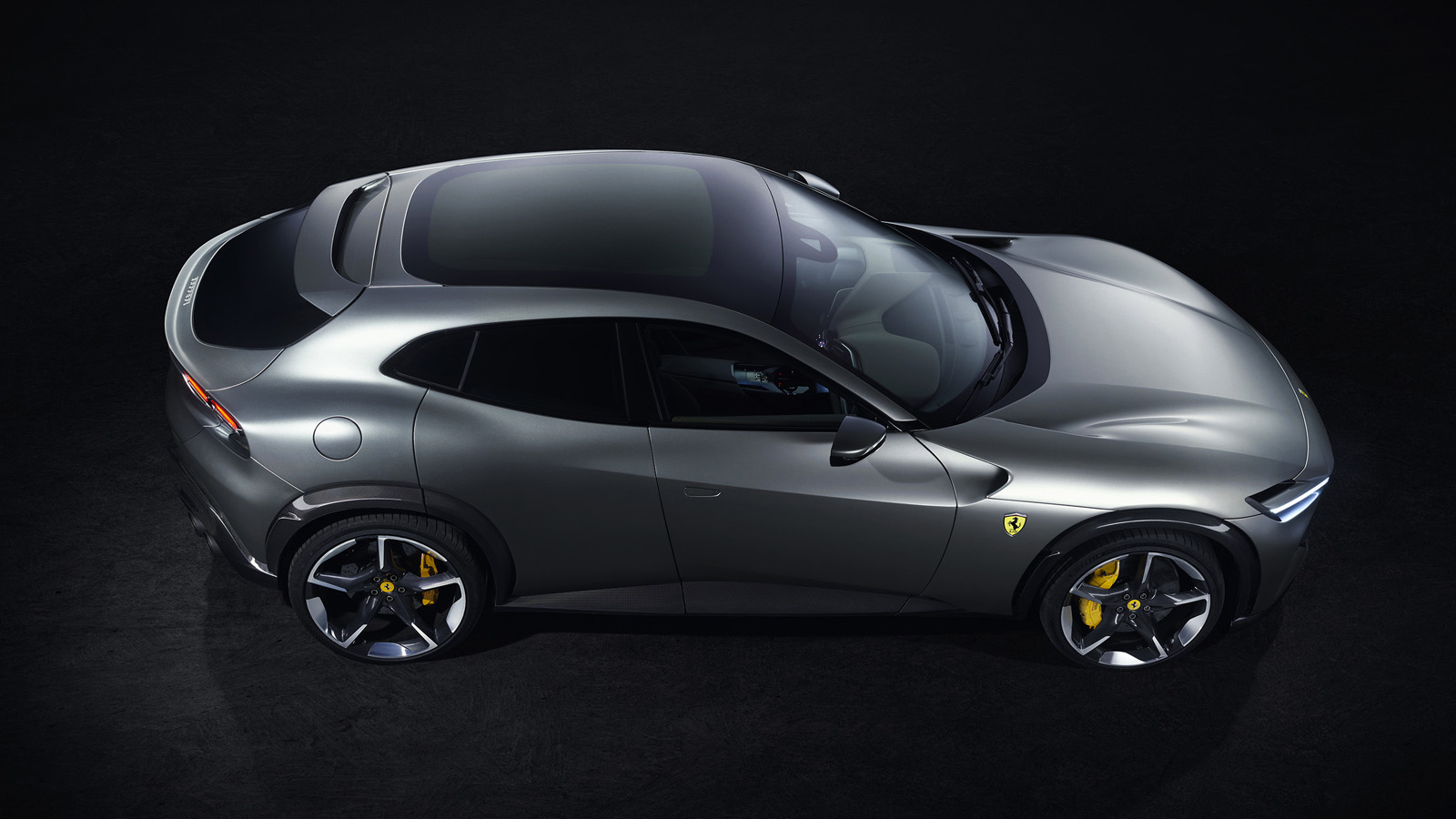 I think the drivetrain layout is especially interesting. As Ferrari describes it:

The Purosangue, on the other hand, has a mid-front-mounted engine with the gearbox at the rear to create a sporty transaxle layout. The Power Transfer Unit (PTU) is coupled in front of the engine to provide a unique 4×4 transmission. This delivers exactly the 49:51% weight distribution that Maranello’s engineers deem optimal for a mid-front-engined sports car.

So, it sounds like the engine is driving axles from both ends: the front ones via the PTO, and the rears through the transmission and driveshaft. Those driven axles can take the Purosangue from 0 to 62 mph in 3.3 seconds, and double that to 124 mph in 10.6 seconds.

Ferrari’s press release gives all kinds of exciting details about this V12:

Intake, timing and exhaust systems have been completely redesigned, while the cylinder heads are derived from the 812 Competizione. Huge attention was lavished on improving mechanical and combustion efficiency, employing Formula 1-inspired calibration concepts. The result is that the most powerful engine ever developed by Ferrari for a four-seater car is also the most powerful in its segment, as well as the only one capable of delivering that instantly recognisable Ferrari V12 soundtrack.

To guarantee maximum mechanical efficiency, the rotating masses have been redesigned. The nitrided steel crankshaft was modified to lengthen the stroke and the internal oil passageways have been redesigned to improve oil flow to the big-end bearings. Lower bearing clearance tolerances improve consumption. The coolant and oil pump assembly was also redesigned focussing on the scavenge section to reduce friction and mass thanks to the adoption of smaller diameter rotors and optimising the inlets and outlets as well as the rotor seals.

The valve train timing is all new, while the new finishing process for the camshafts has considerably reduced the surface roughness and the friction coefficient between the lobes, the shafts themselves and the hydraulic tappets.

To optimise the torque curve and ensure a continual increase across the rev range, the geometry of the intake ducts and plenums was revised. The geometry of the exhaust system was also optimised to increase permeability reduce back pressure. There are specific pistons with a redesigned crown to increase combustion efficiency.

The engine’s direct injection system comprises two high-pressure fuel pumps (350 bar) that deliver petrol to the injectors in the combustion chambers. The ignition system, comprising 12 coils and spark plugs, is constantly monitored by the ECU which has an ion-sensing system that measures ionising currents to control ignition timing. It has a single- and a multi-spark function to make the combustion as efficient as possible at all revs. The ECU also controls combustion in the chamber to ensure that the engine is always working at peak thermodynamic efficiency, thanks to a sophisticated strategy that recognises the octane rating (RON) of the fuel in the tank and adjusting the advance to suit. The engine strategy includes a new patented function derived from Ferrari’s Formula expertise that optimises the torque during transient acceleration manoeuvres in the low and mid-range. 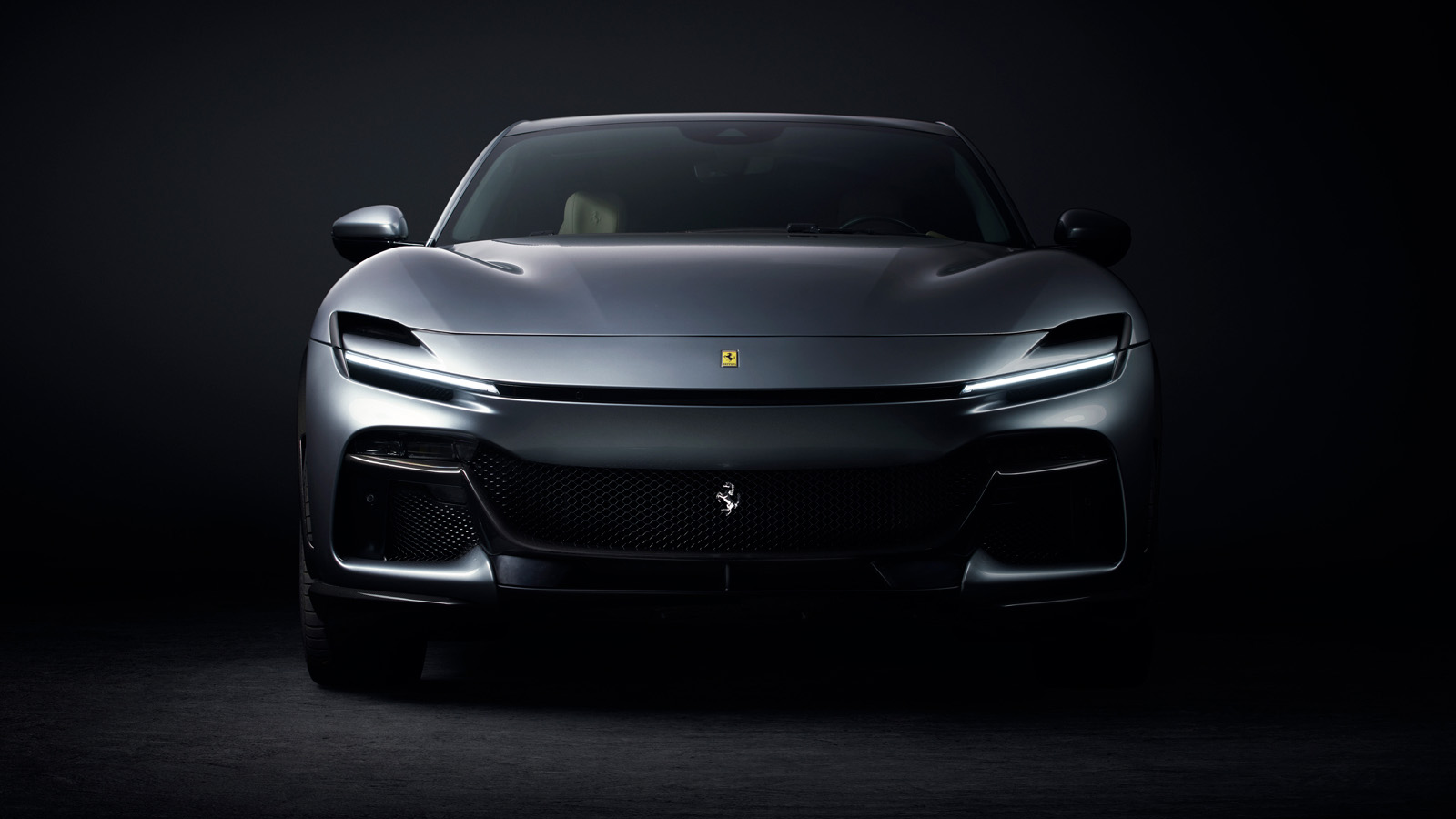 Bodywise, Ferrari is using a carbon fiber roof panel to keep the weight low, and it has the largest trunk ever on a Ferrari. There’s also an exciting and mildly silly new term for what we all call “suicide doors” that Ferrari would rather use (emphasis mine):

Redesigning the bodyshell from scratch also meant the designers could incorporate rear- hinged back doors (welcome doors) to make ingress and egress easier while keeping the car as compact as possible.

“Welcome doors.” Come on. That said, they are fantastic: 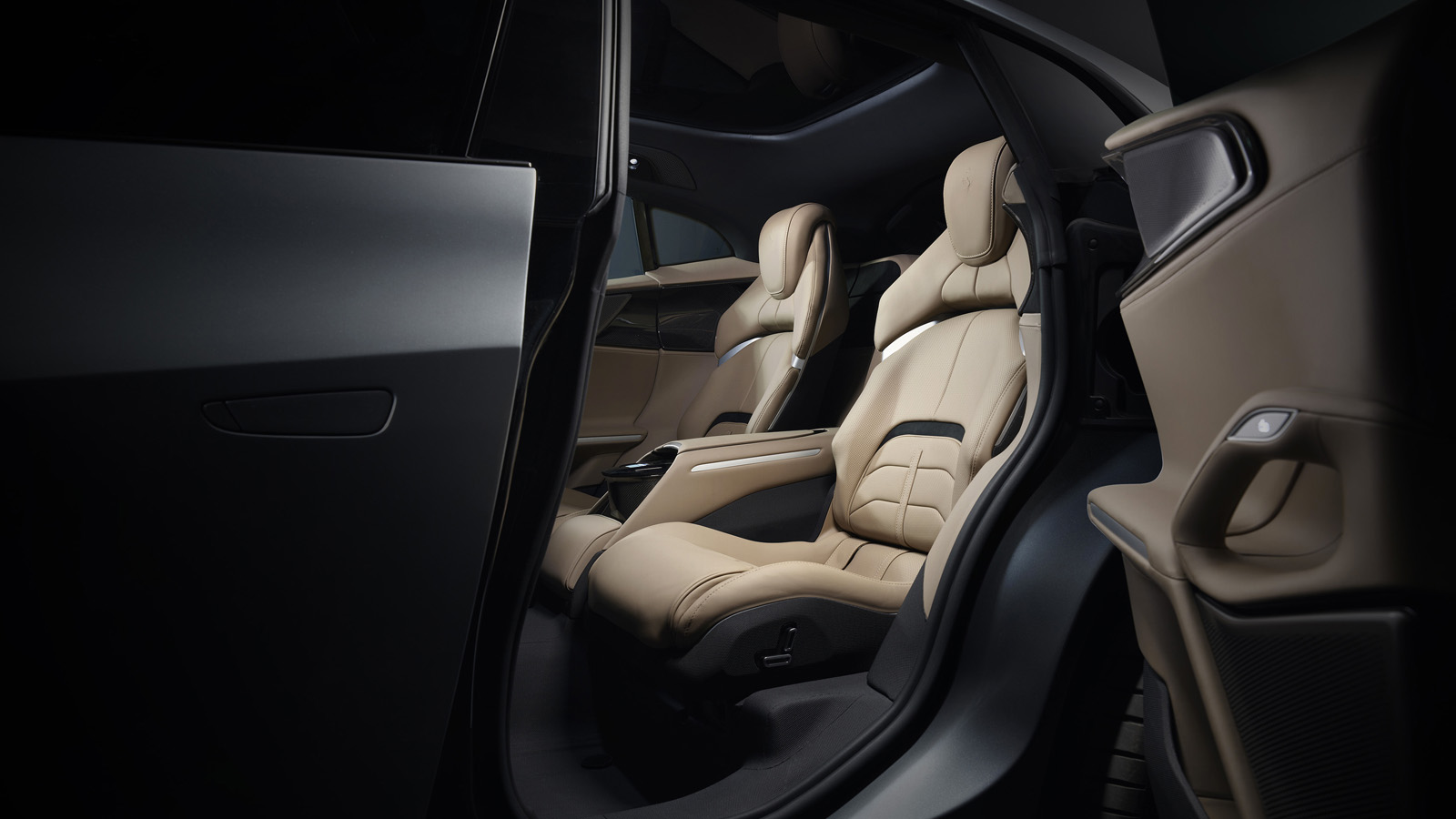 A really interesting detail of the aero and design is the suspended wing on the hood, called an “aerobridge” by Ferrari. 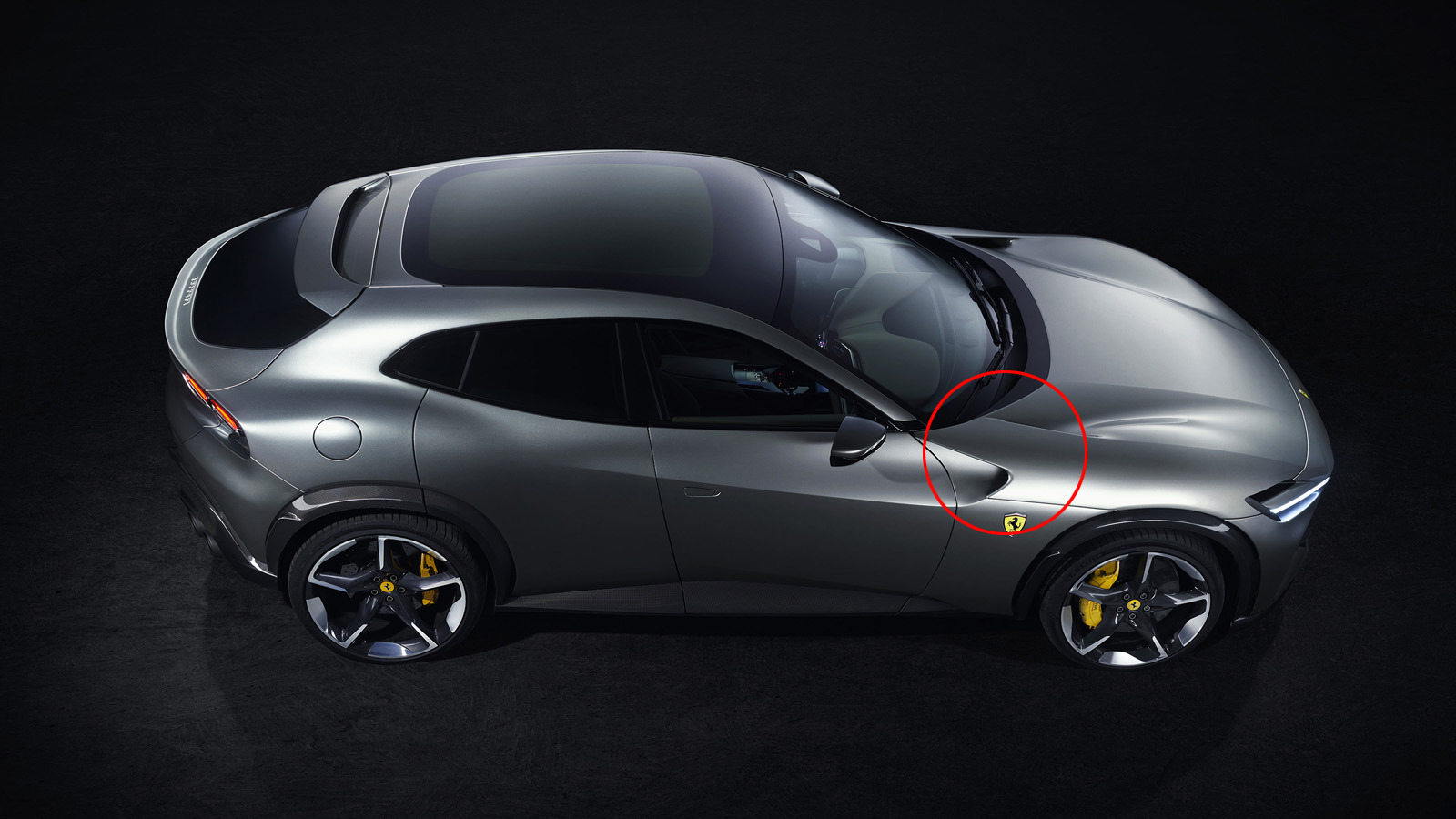 The purpose of this aero element is to reduce drag and “to generate suction near the evacuation point of the central radiators on the front underbody. This maximises cooling of the central radiating masses as efficiently as possible and also allowed the design of a much smaller radiator intake.” Also, as an SUV, the wheels and higher ride height create more drag, so this and other aero elements are employed to help mitigate those effects. 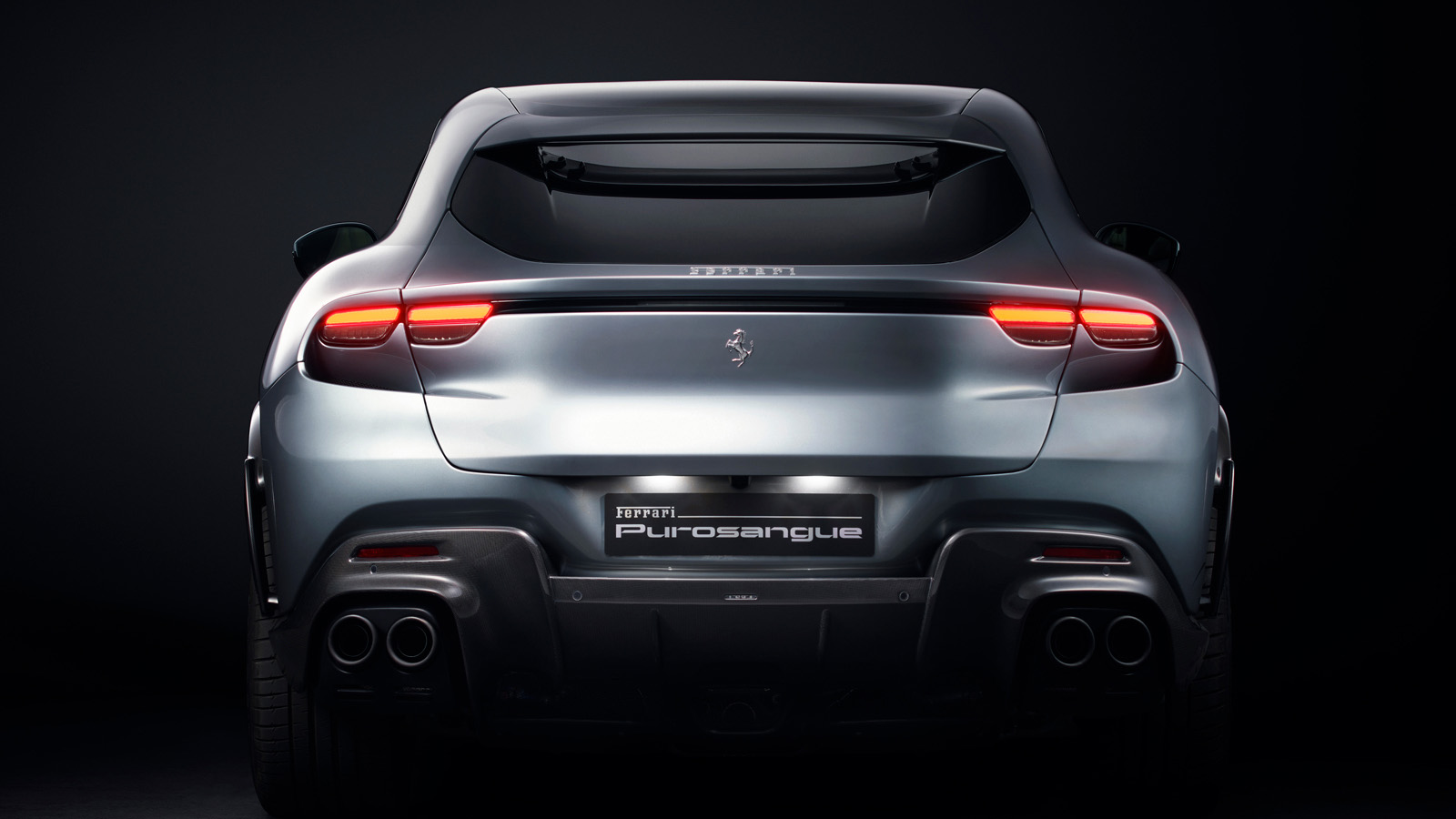 Other interesting details found in Ferrari’s press information is that there’s a function they call “Sailing” that “allows the engine and gearbox to be automatically decoupled to guarantee greater smoothness in driving situations where traction isn’t required” which reminds me a lot of the “freewheel” functionality you’d find on old DKWs and Saabs and other two-stroke cars so you could coast without burning up your engine, which otherwise would be starved of lubricant. I think the purpose is pretty different here, though. 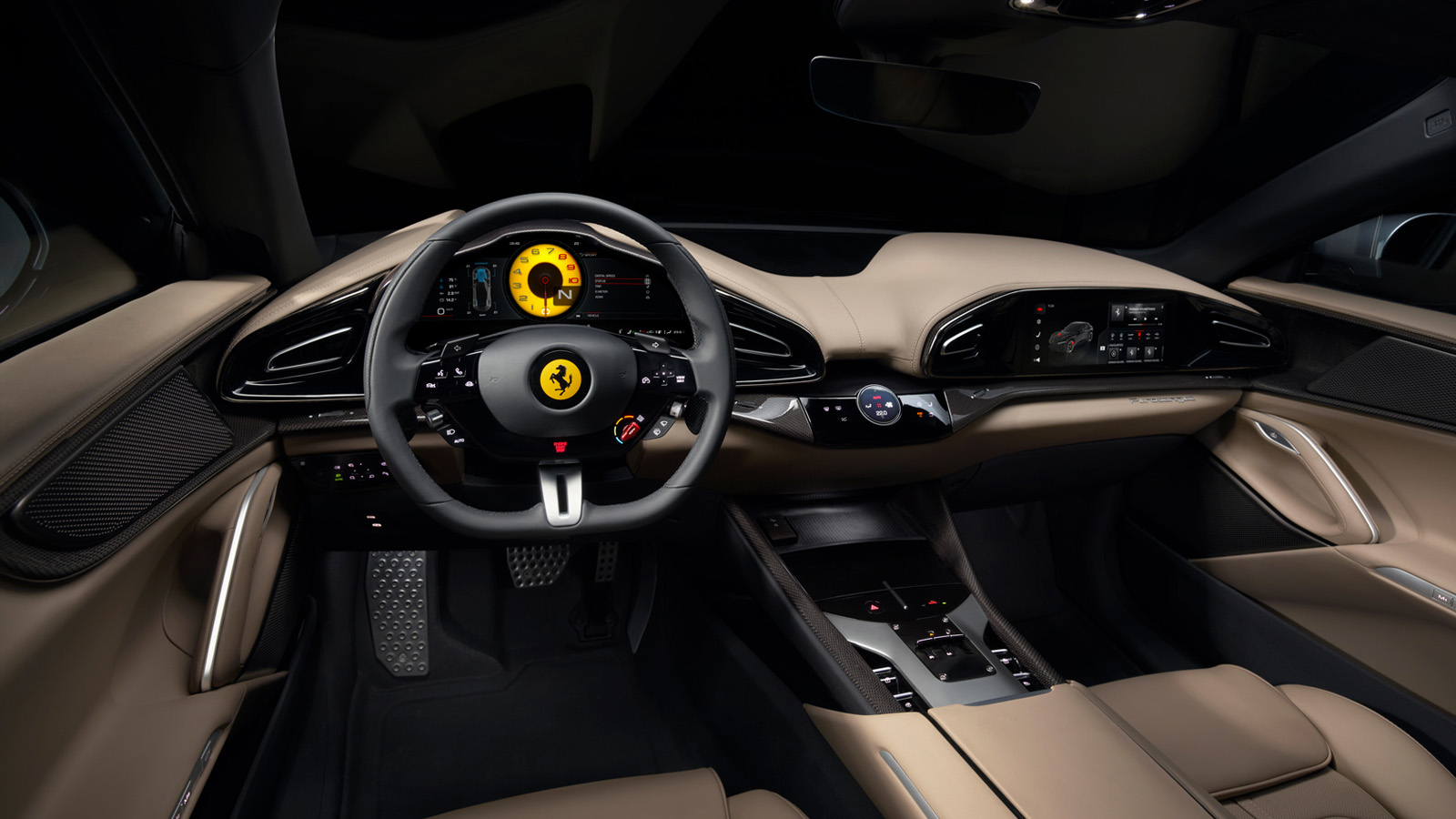 There’s a full palette of driver-assist systems and other expected modern toys, of course:

…so if you’ve somehow bought a Ferrari so you don’t have to really drive your Ferrari, I guess you’re in luck, despite your ridiculous decision-making process. 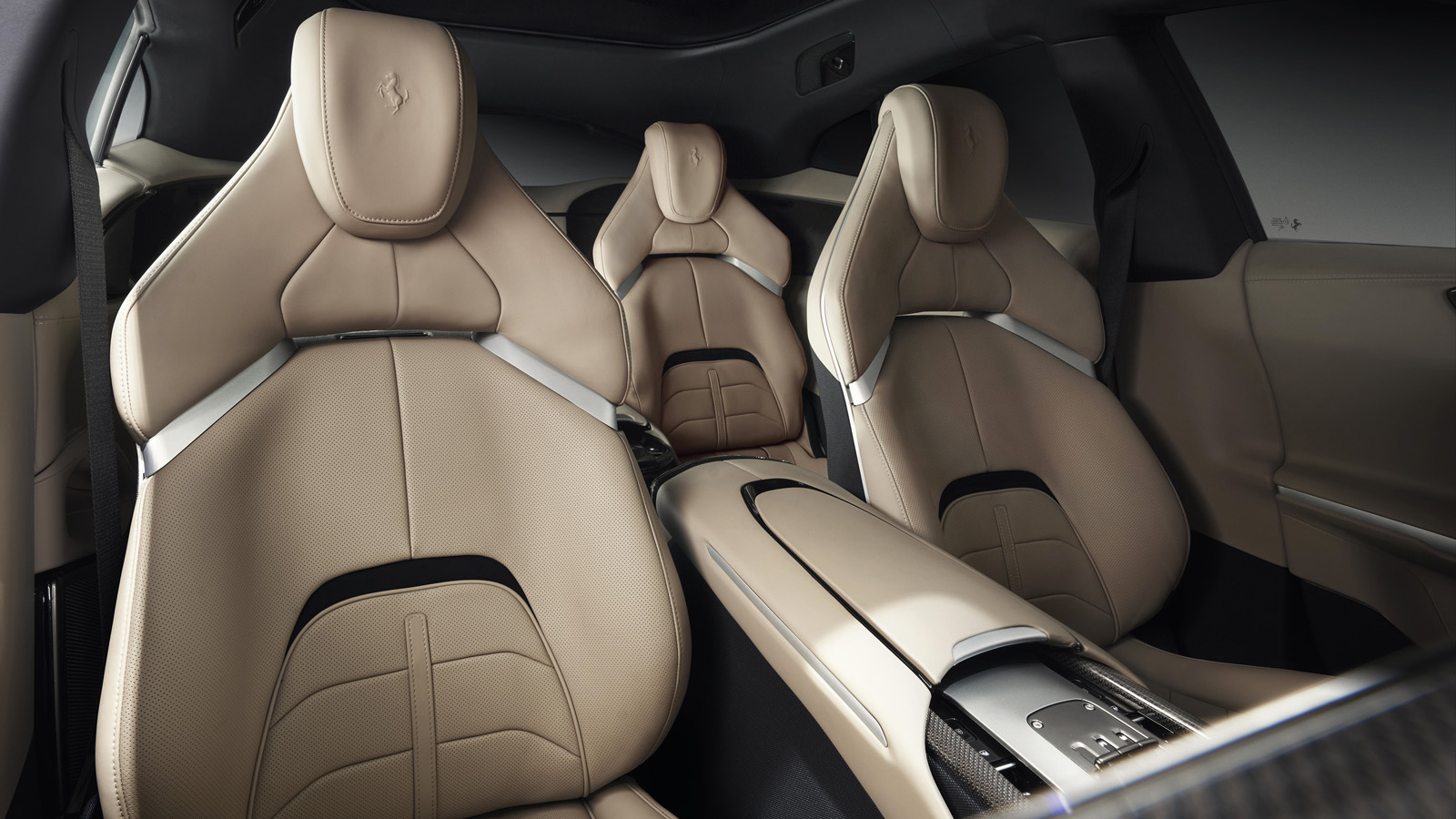 The Purosangue will start at $390,195 and it seems 2,000 people have already pre-ordered one. Oh, and Ferrari has a request to all of us about this thing, from Chief Executive Officer Benedetto Vigna:

“Please don’t call it an SUV, because it isn’t. It’s a Ferrari.”

I don’t know about that, Benny. If you don’t want it to be called an SUV, then maybe you shouldn’t have made an SUV [ED Note: I’d say this is more of a crossover, TBH – MH]. It’s still a Ferrari, though, I’m with you there, and it’s quite lovely and seems very fast and fun. So maybe just relax and let people call it an SUV.

I'm a co-founder of the Autopian, the site you're on RIGHT NOW! I'm here to talk to you about taillights until you cry and beg me to stop, which I absolutely will not. Sorry. Hug? Also, David's friend.
Read All My Posts »
PrevPreviousOur Professional Car Designer Draws A Mini Truck Made By Mini
NextAirstream’s New Rangeline RV Is Pretty Much Perfect And Almost AffordableNext