Our Professional Car Designer Draws A Mini Truck Made By Mini

I arrived at The Autopian with a fresh pack of Copic markers and full of optimism. Remember those happy summer days when I asked you for your ideas of vehicles you wanted to see? Here we are six months later, David has fled to the other side of the world, Torch has declared himself ruler of his own country, and Mercedes thinks Chris Bangle was a good car designer. All this has left me a broken shell of a man but in a return to your normal programming this week I’ve designed another one of your suggestions.

Commenter Fuzzyweis wanted to see a return to a car-based mini truck. We are all agreed, are we not, that the trucks are too damn high? The Maverick and Santa Cruz have kinda sorta gotten back down to a more reasonable size, but only the Ford is really car based as it shares its platform with the Focus. But could we go smaller? A mini mini truck?

And what if that trucklet was built by MINI? Then it would be a MINI mini mini truck! Check out this little treasure I spotted at a local car show a few weeks ago: 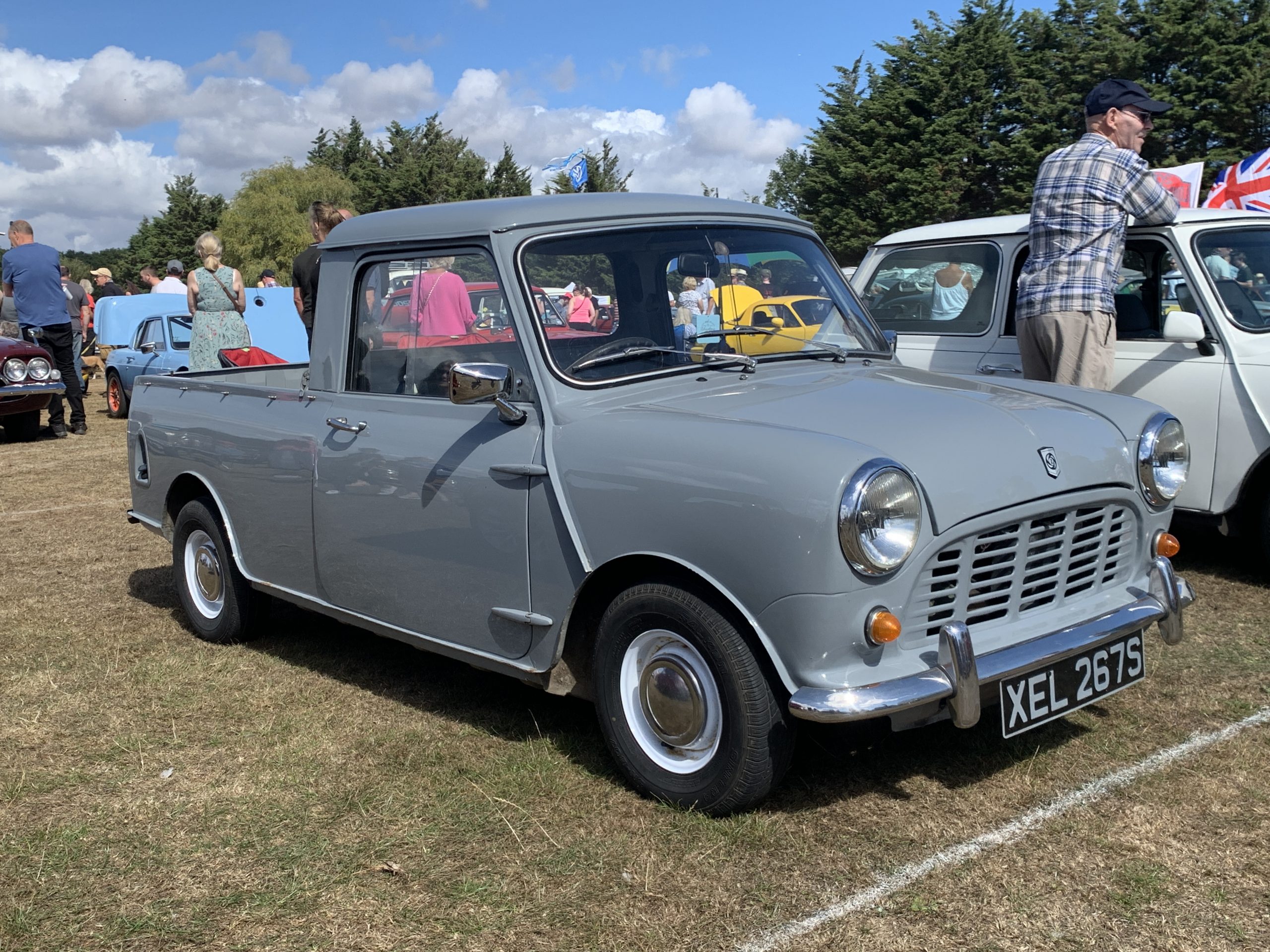 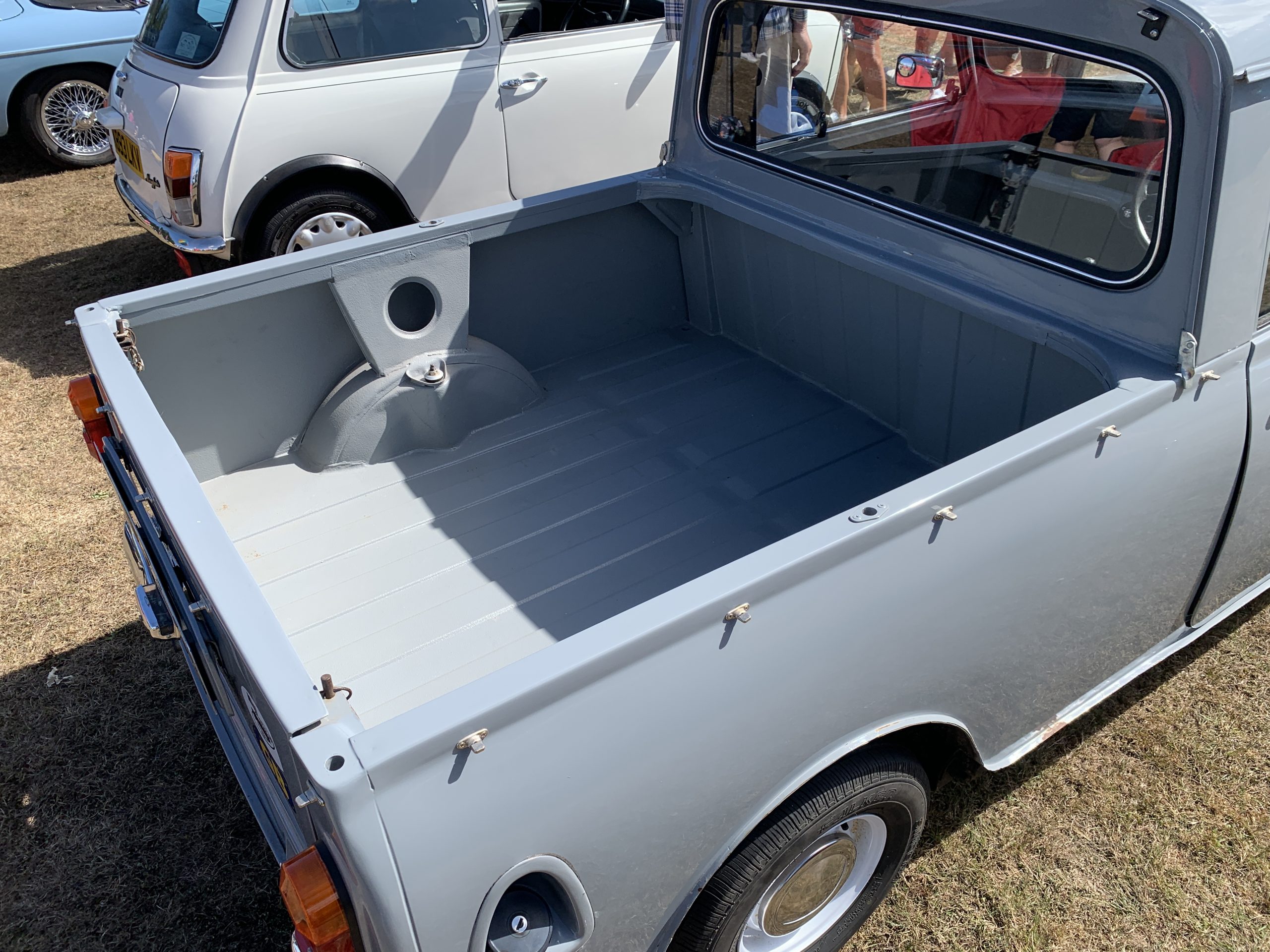 The original Mini pick up appeared in 1960, a year after the four seater first appeared. It had an extra 10 inches or so added to the wheelbase and shared much of its sheet metal below the waist with the van version. The bed was 47 inches long and 33 inches or so wide, and it could carry almost 700 pounds back there, although with only 34bhp from 850cc you weren’t hauling anything fast. But that wasn’t the idea – this was an economical no frills workhorse meant for local trades people.

When you’re designing a new car, you’re always thinking about what other versions can be done that seem logical. When I was interviewed for my first job and I saw the [redacted] for the first time, I said “if you guys don’t build a [redacted] version of that you’re out of goddamn minds.” Cue lots of awkward glances and knowing smiles all around the table. 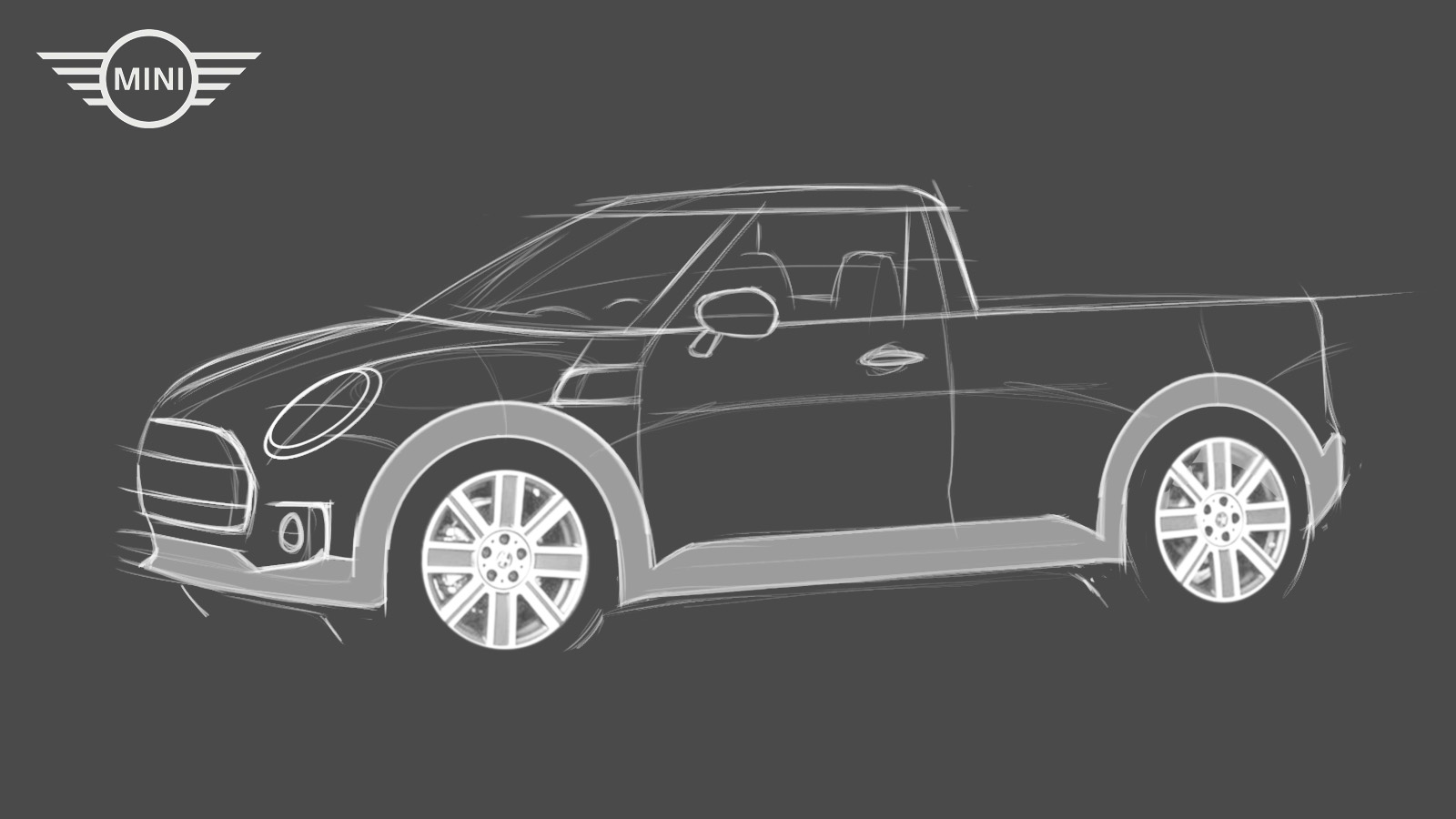 So for our Mini truck the first sketch shows a current Clubman that’s had a Sawzall taken to the rear passenger compartment. This might seem a bit minimum effort, but the more you can share between body styles the better, because it saves money and helps your business case to stack up.

I wasn’t really feeling this at all. The problem with the current range of MINI’s is they share their platform with the FWD BMW 1 and 2 series (that you guys don’t get) but also the BMW X1 and X2, all cars from the next class up. This leaves the poor MINIs looking a like an over inflated balloon, because their visual identity wasn’t designed around that size of vehicle.

For the second round of sketches, I looked at something MINI teased us with by putting the tip in, only to pull out at the last moment. The Rocketman Concept of 2011 was a promise of a return to a genuinely 10ft long MINI. It went nowhere, but showed they still knew how to make a small car. Maybe if we added say 12” into the wheel base and upped the chunk factor of the cladding, it might make a good basis for our MINI pick up? 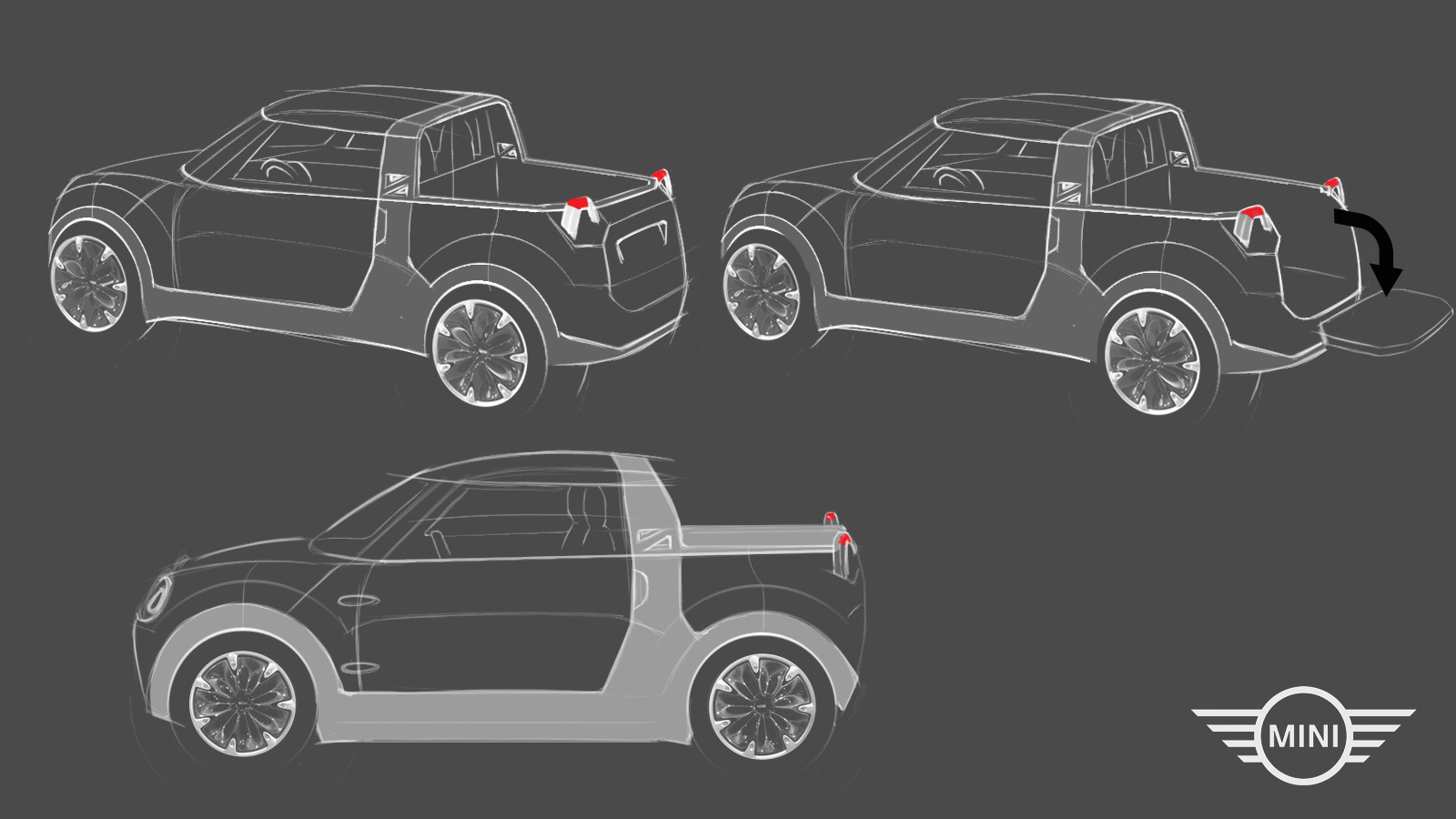 This one I really liked evidenced by the fact I did a few sketches of it. When you’re sketching and you hit upon something good, it’s really hard to avoid drawing it over and over again. It’s like your brain is saying that’s it! and won’t let your drawing hand do anything else. This is when it’s time for an espresso and half an hour surfing classic car ads on company time before picking up the pen again. 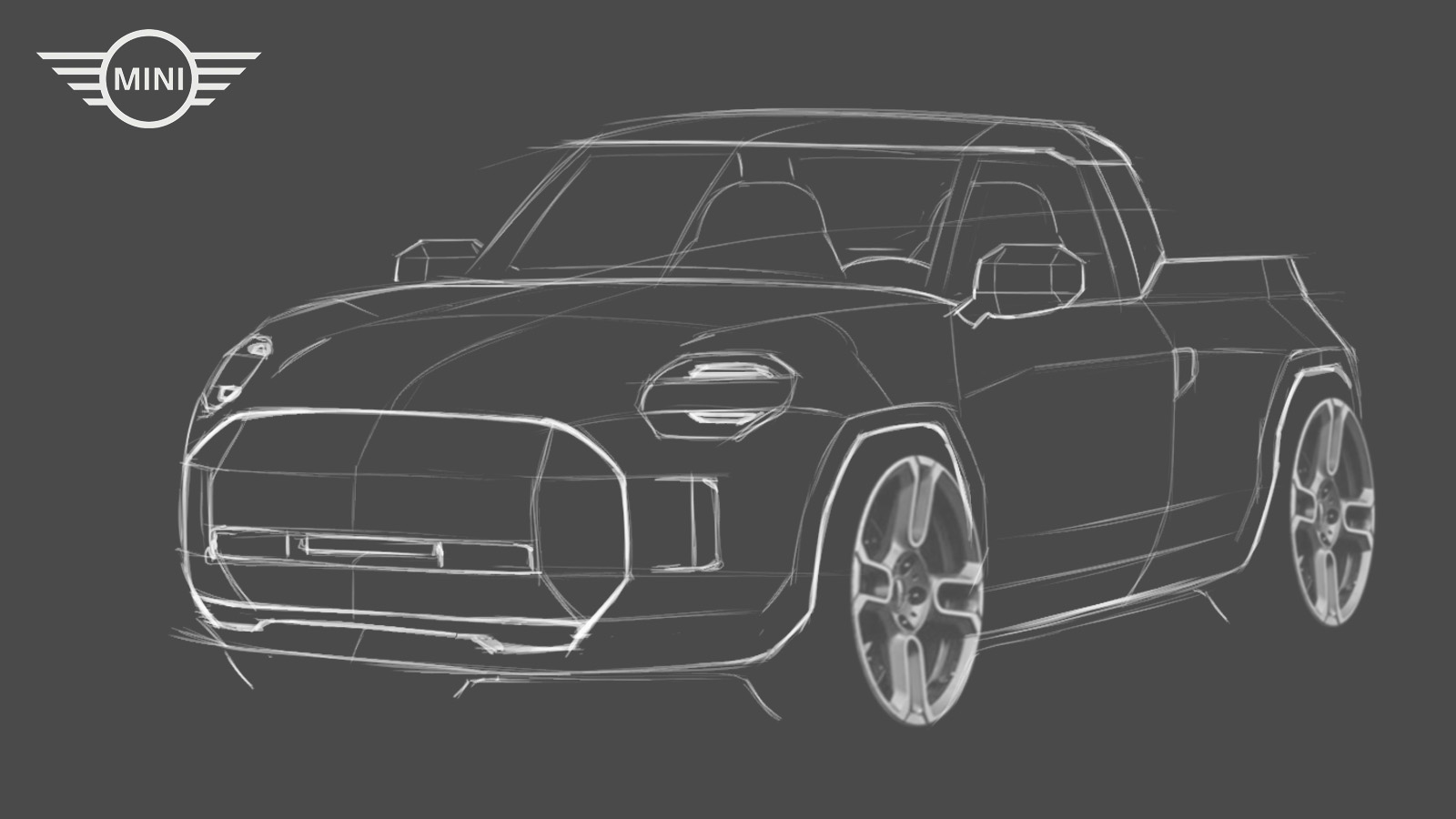 So the third sketch is my attempt to bring a straighter, modern form to the classic MINI curved surfacing. I wanted something a bit more butch than the usual MINI cheeky appearance. It doesn’t look too bad from this front three quarter, but I utterly failed to make it work in a side view. Sometimes something that sounds good in your head don’t work on paper. This is the whole point of sketching – you can have all the ideas in the world but you need to find out if they actually translate visually. In this case, it really didn’t. 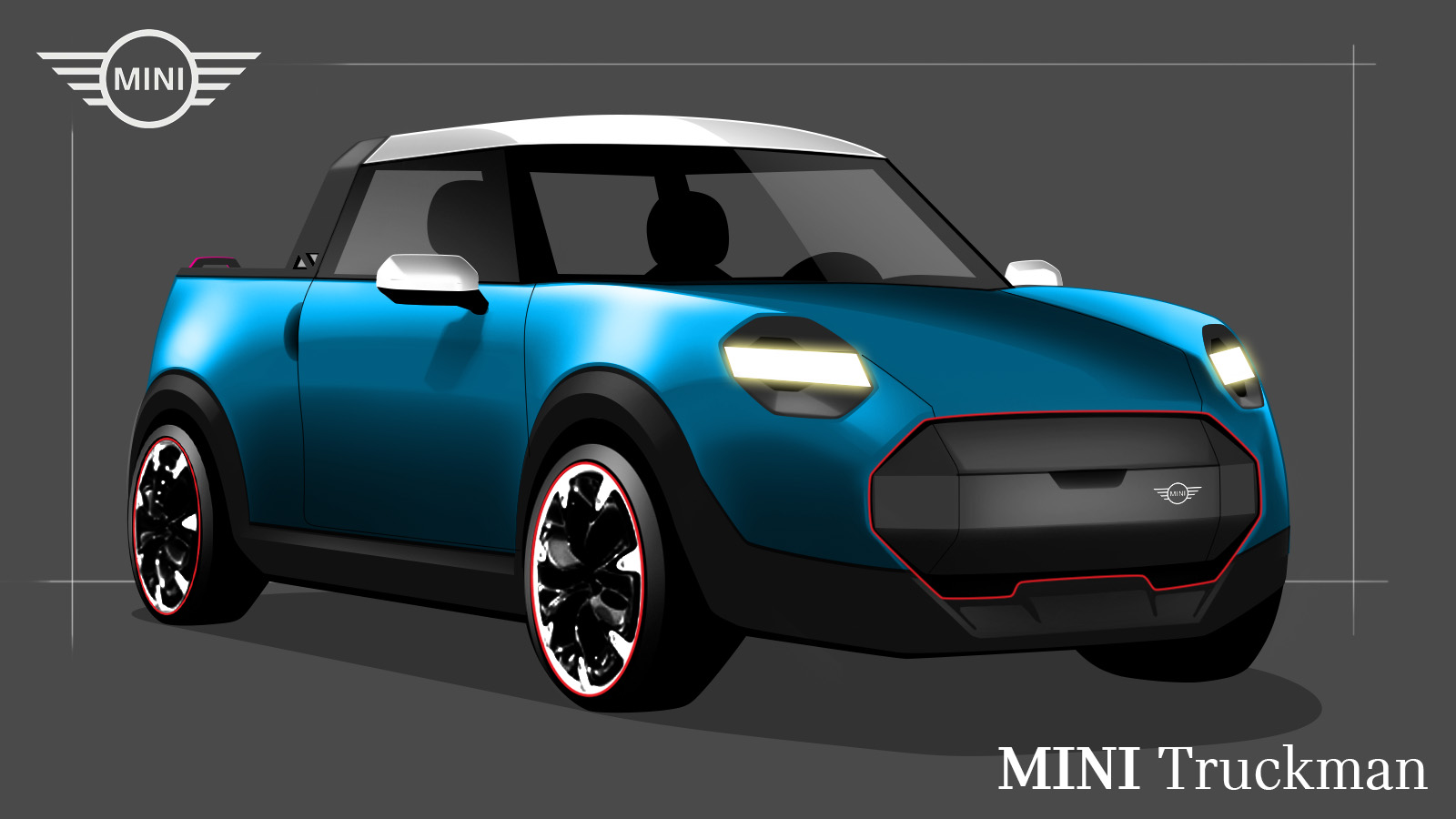 So for the final design I’ve gone back to the second round of sketches, and simplified it a little by removing some of the cladding on the body side I was using for graphical break up. As I was rendering this up I realized it was looking a little busy and fussy with all that on the bodyside. As small cars are a reduced canvas, you don’t need as much going on.

So now we just have cladding around the wheel arches and along the bottom of the body, partly to hide the slightly raised ride height. Why the raised ride height? If the use case for this is independent trades in city centers, it makes most sense as an EV.

The current MINI Electric is doesn’t sit on a dedicated platform and its EV powertrain is taken from the BMW i3. The batteries are packaged under the floor and along the spine in a T shape. But instead of being RWD like the i3, the MINI bolts the motor and associated hardware under the hood using the existing engine mounts to drive the front wheels. This is how you get non-six figure EVs to the market – by using existing hardware. That’s what we’ll have to do for our pick up. Packaging in car design is everything. It’s like a 3D jigsaw puzzle where you’re given the wrong pieces and told to make them fit. 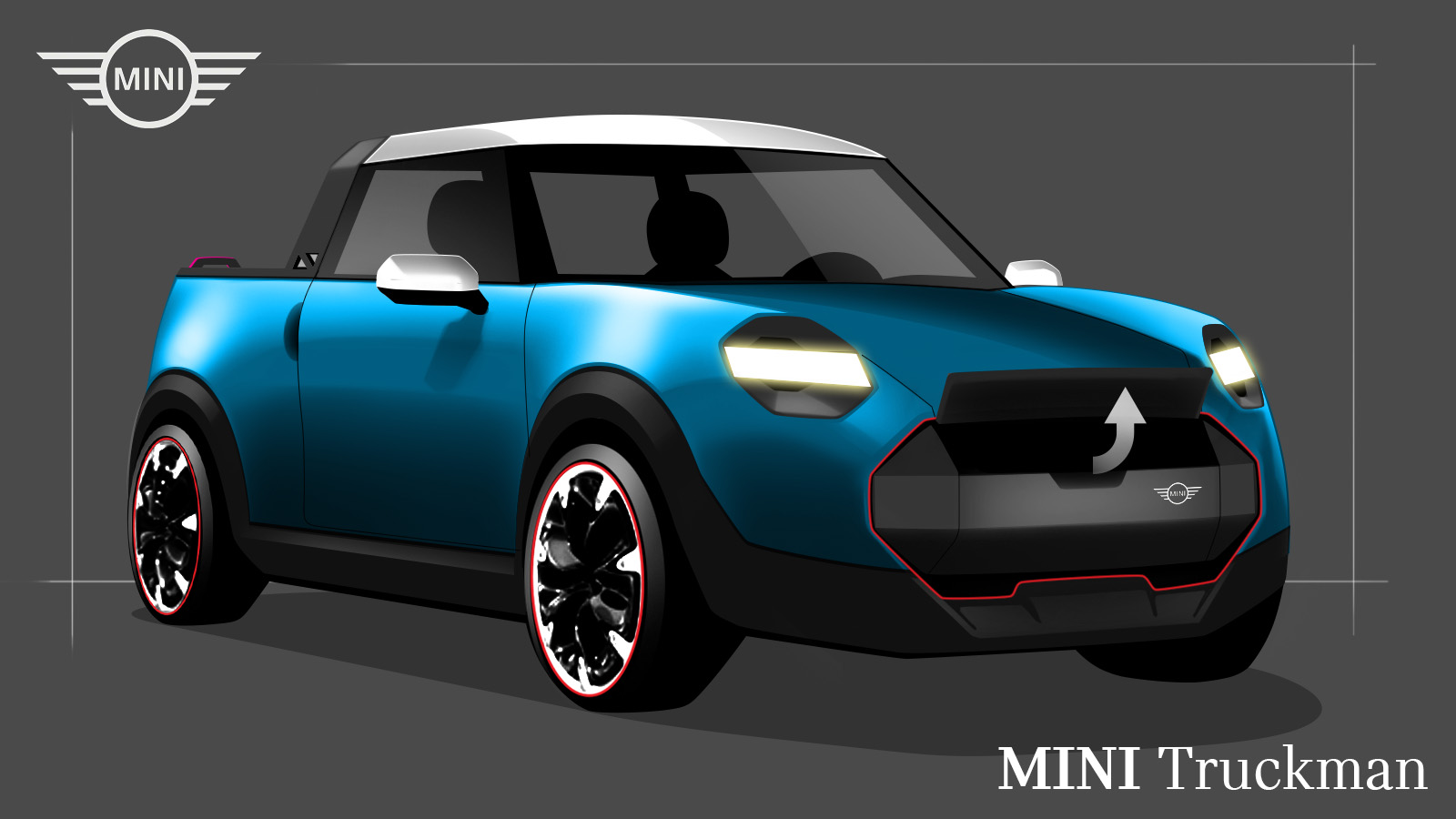 Another problem with non-crew cab pick ups is the lack of storage space for things you don’t want to put in the bed, like your Sunday papers or expensive marker pens. We don’t have a frunk and EVs don’t need a traditional opening for cooling so I’ve taken the ‘grille’ shape and extended it forward a bit to create a small lockable compartment at the front. 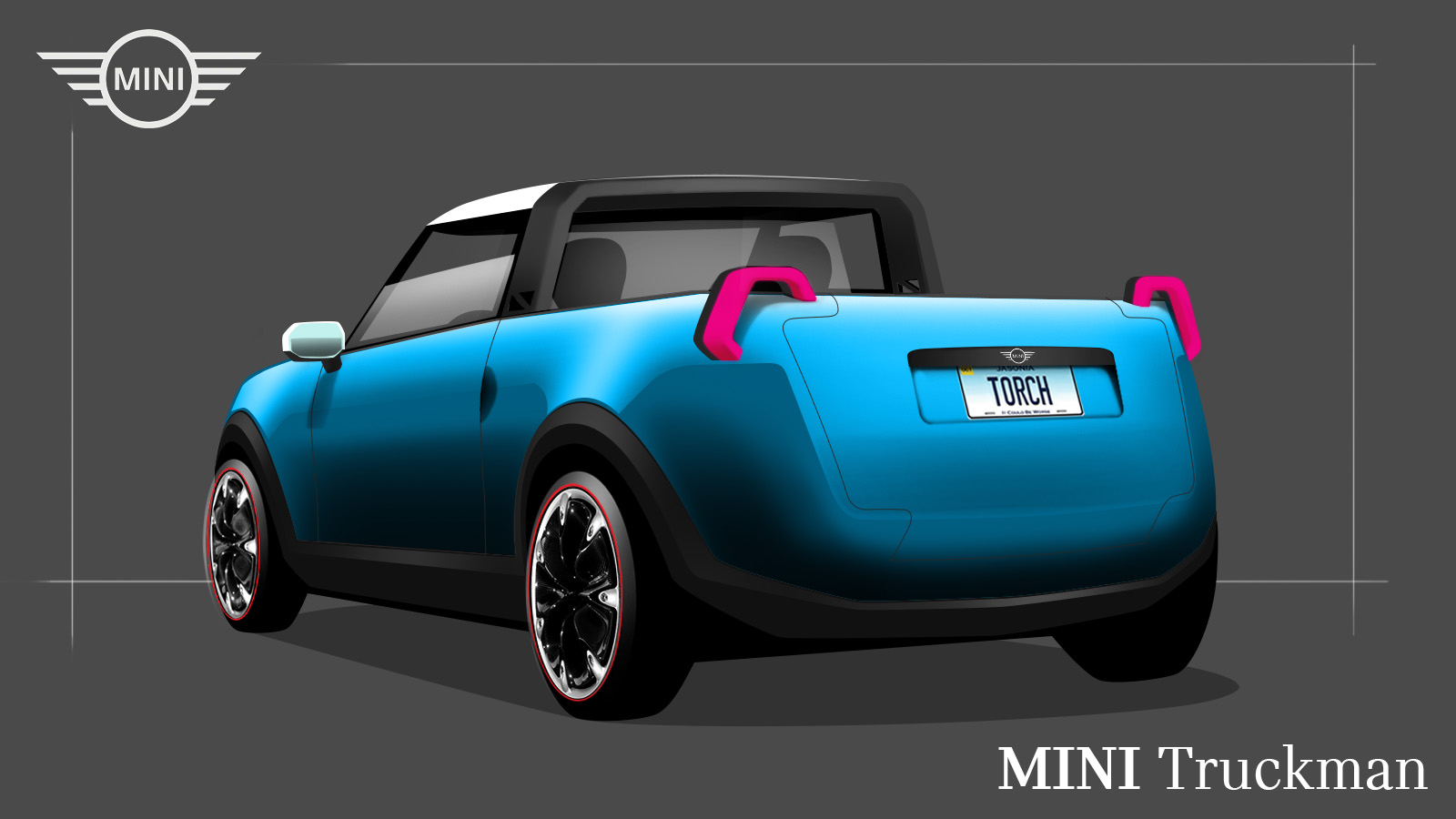 I’ve added two small triangular cutouts into the base of the roll bar at each side – these give a subtle Union Jack reference but serve a purpose somewhere to hook bungee cords or tie downs for stuff in the bed. As a great artist I’ve blatantly stolen the Rocketman’s taillamps, but I’ve added a little extra structure to back of them so they can be used as tie downs at the other end of the bed. Maybe on the good timeline the Rocketman actually did make production. In that case I’ve just saved a cool couple of million in tooling costs.

[Editor’s Note: I love the hint at the Union Jack but with utility in the cutouts, and those taillights were the best part of the Rocketman concept, so I’m thrilled to see them here, ready to get stuff tied to them! – JT]

Anybody saying anything mean about the UK this week is likely to find themselves in the Tower of London, having their front door kicked in by the SAS or even worse find themselves on the end of a withering stare from me, so watch out down there in the comments.

Professional Car Designer and writer about car design. I have a BA in Automotive Design and a Masters in Vehicle Design from the Royal College of Art in London, where J Mays was my tutor. He used to bring in donuts. I was hired from there into a major European OEM. I daily drive a 2011 L320 Range Rover Sport and also own a 1983 Ferrari Mondial QV. I always wear black, love goth music and have way too many books. twitter: @adrianfclarke. Instagram: adrianfclarke
Read All My Posts »
PrevPreviousThis Junky Postal Jeep With A Chevy V8 Engine Is A Reminder That America Is The Wild West Of Car Culture
NextThe Ferrari Purosangue Is Ferrari’s First Ever SUV And It’s Got A V12 And Suicide DoorsNext