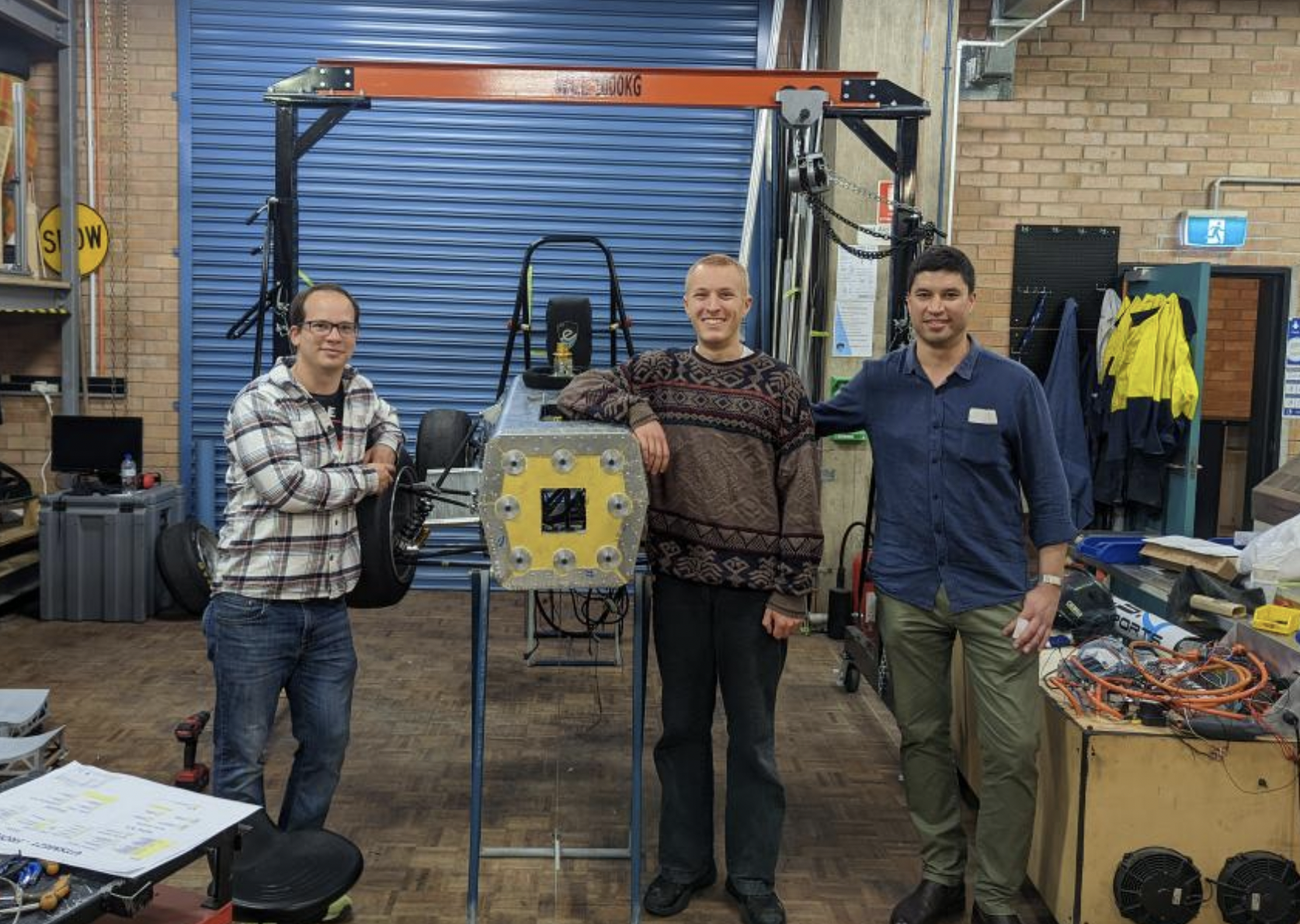 I’m in a McDonalds in Dubbo, New South Wales in Australia because the Wi-Fi in the tiny rural town where I’m staying is about as fast as an old Mercedes 240D wagon. I’m behind in getting you all an update because the last few days have combined to form the most epic vortex of concentrated Australian car culture I could possibly have imagined. I’ve driven a Hemi-Six powered Charger, stared at Barra engines in a Kangaroo-filled paddock, rode in a V8 Holden GTS, received a tour of a custom-built ute “tray” (which means “bed”) — I can go on, but I’ve got work to do. I have fewer than four weeks to fix a ridiculously dilapidated 1969 Chrysler Valiant ute and then drive it to Australia’s most unhinged car show, the Deni Ute Muster. I’ll show you the condition of my ute soon; for now, I’ll talk about where I traveled after landing in Sydney, the place where I wrote my last update, the upside-down “ʅɐɯɹoN ʎʅʇɔǝⅎɹǝԀ ɯǝǝS sƃuᴉɥꓕ pu∀ ɐᴉʅɐɹʇsn∀ uI pǝʌᴉɹɹ∀ ǝʌ╻I” article that so many of you loved.

After doing a few touristy things like walking to the Opera House and taking a ferry to scenic Manly Beach across the bay, I headed to the University of Technology Sydney, or UTS, as a reader named Imraan had invited me there to see the Formula SAE team’s operations. Actually, what really happened is that I received a message from the sketchiest Instagram profile in history inviting me to hang out, and I — being the fool that I am — accepted. Seriously, look at this Instagram profile:

The probability of this “imraanye” character being an axe murderer was greater than 20 percent, but I risked it. And I’m glad I did.

No matter which corner of the planet you’re visiting, if you love cars, you’ll almost certainly get along with local Formula SAE team members. They’re nerdy, they’ll tell you all about carbon fiber suspension members, they’ll chat on and on about hub motors, they’ll tell you all about their battery’s cooling system, and they’ll probably talk your ears off about the cars they’ve owned. Though I’ve been out of the engineering game for seven years now, there’s a kinship I feel among engineers, and it spans cultures.

Check out the crew below; it’s made up of sharp, passionate people who spend hundreds of hours a month in the basement cutting metal, crimping wires, riveting panels, adjusting suspension geometry, dialing in electric motor controller operation, and running FEA strength analyses — sometimes just for fun (I’m not kidding about that; the team told me that one member ran an FEA sim on the spacer used for that red kill-switch button you see on the roll hoop — they simulated the load of someone whacking that red switch. Everyone laughed at how absurd that was). 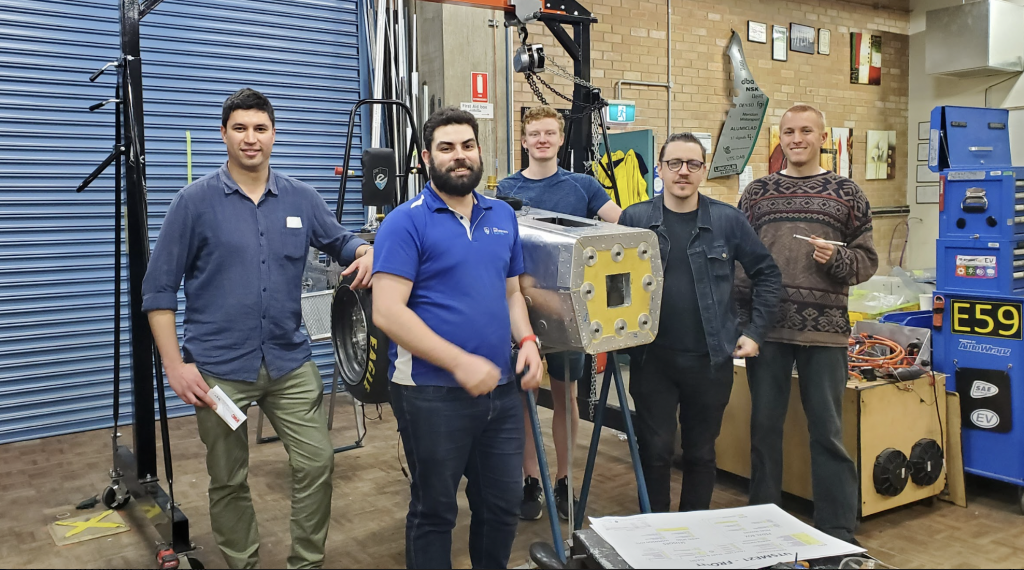 If you’re not familiar with Formula SAE, it’s the premier racing competition between universities around the world. It’s an opportunity for engineering (and other) students to flex not just their wrenching skills, but also their program management prowess and their ability to leverage engineering theory to optimize the vehicle just enough to beat out the competition. Formula SAE involves studying the rulebook forwards and backwards; it’s about reading textbooks and chatting with professors about ways to maximize a vehicle’s performance; it’s about hours spent in the computer lab designing the car in Solidworks; it’s about late nights wrenching; it’s about cheap pizza, soda, and the smell of hot metal in the air from all the cutting, grinding, drilling, bending, and welding going on pretty much all the time; it’s about balancing all the high-intensity geekiness with extreme silliness that sometimes involve blowing shit up. It’s about late-nights in the trenches, troubleshooting and praying.

It’s an amazing competition that forges many of the greatest automotive engineers in the world. 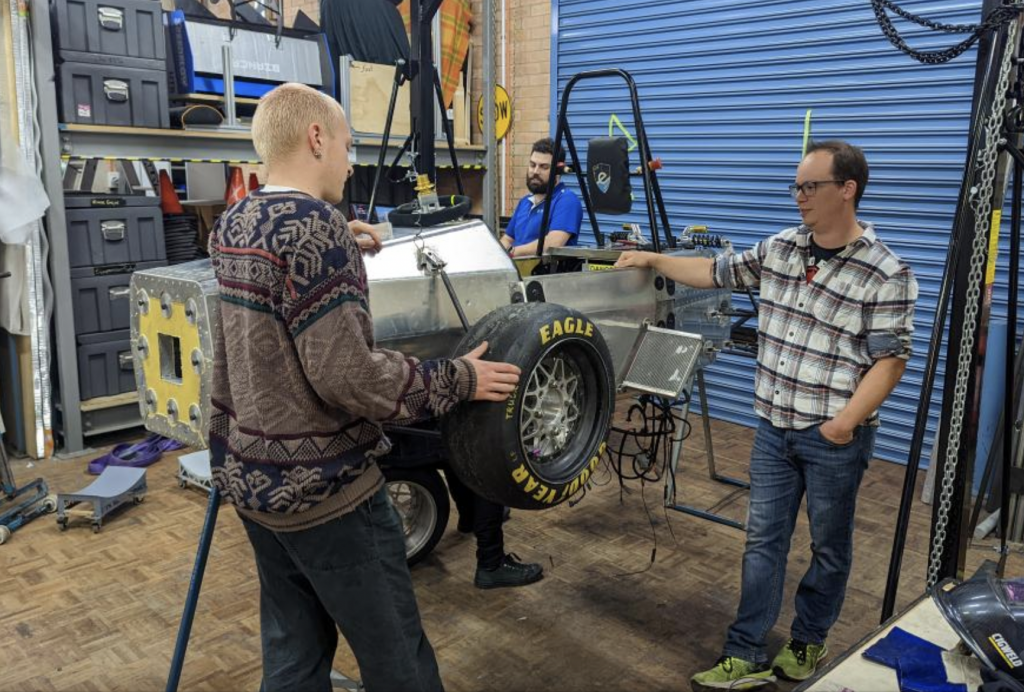 Though the rules put restrictions on the vehicles’ overall designs (geometry constraints, safety requirements, etc. keep many of the cars looking similar), there are lots of ways to build a Formula SAE car. UTS’s team is planning to use carbon fiber in the future, but for now, the team’s car’s body is a monocoque made of aluminum honeycomb. 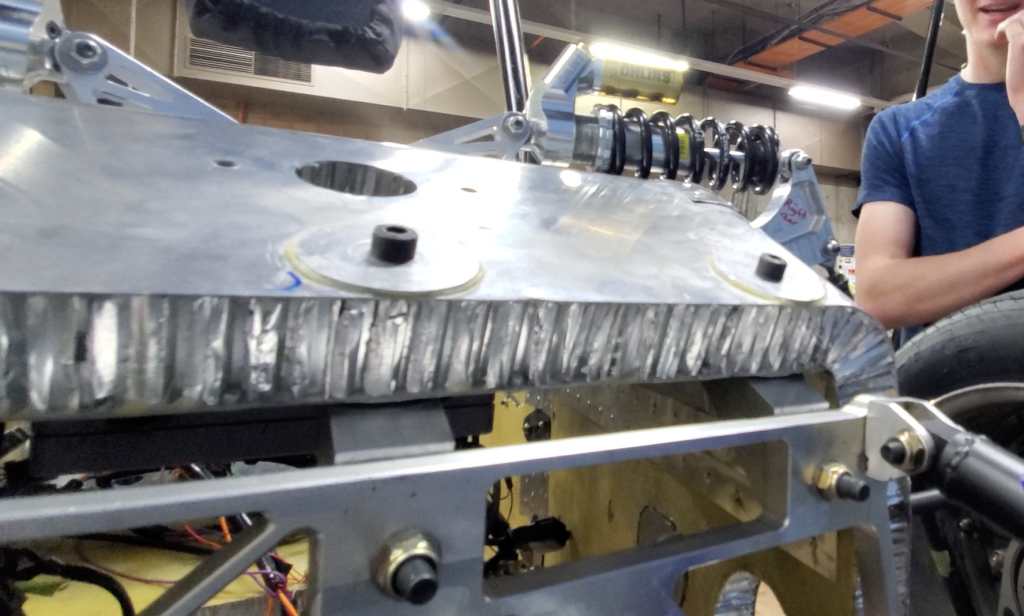 It’s pretty thick stuff, but the material is largely air. The material is made of a highly porous aluminum hexagonal honeycomb matrix with sheets of aluminum bonded to each side. It’s surprisingly stiff for its weight. 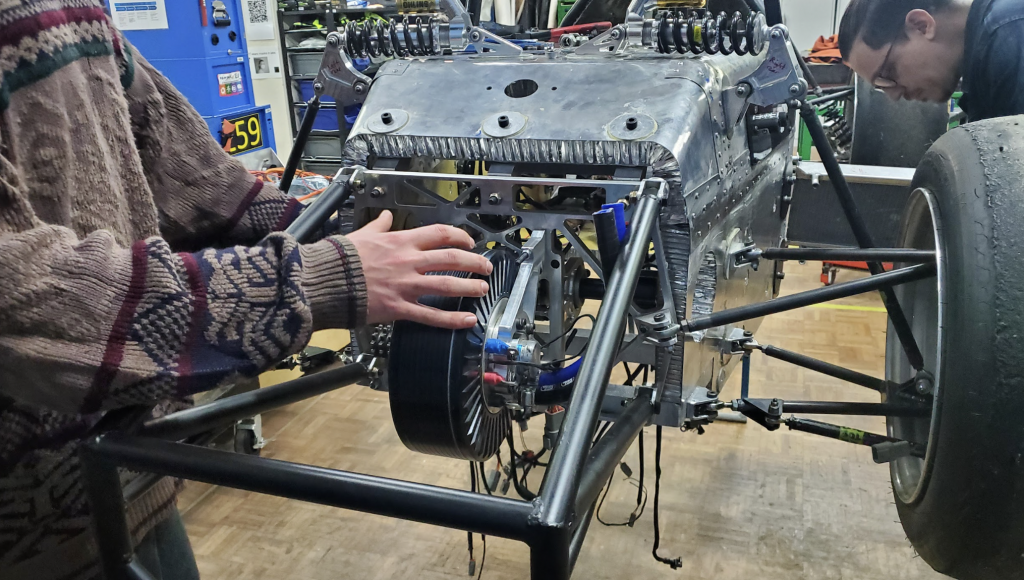 These images from Australian materials company Polycore Composites provide a close look at how the material looks inside:

At the rear of UTS’s racecar sits a compact electric motor with a sprocket hanging out the left side. That sprocket drives — via a chain — another sprocket on the drive axle, which has a built-in limited slip differential. You can see two photos above that the car has a double wishbone rear suspension with steel control arms and a “pushrod” coilover setup. As the suspension moves, a rod pushes and pulls one part of a chassis-mounted rocker, which rotates about its pivot, pushing against the coilovers. I’m no dynamics engineer, but per my cursory research, it seems that remote coilovers offer potential advantages in the areas of unsprung weight, aerodynamics, tune-ability (thanks to the rocker/bellcrank adding an extra “lever”), and ease of coilover adjustment/replacement.

UTS’s team is currently working to replace steel suspension arms with carbon fiber rods that have steel sleeves — which the team 3-D printed itself — attached via a special adhesive, as Bevon is describing to me in this picture: 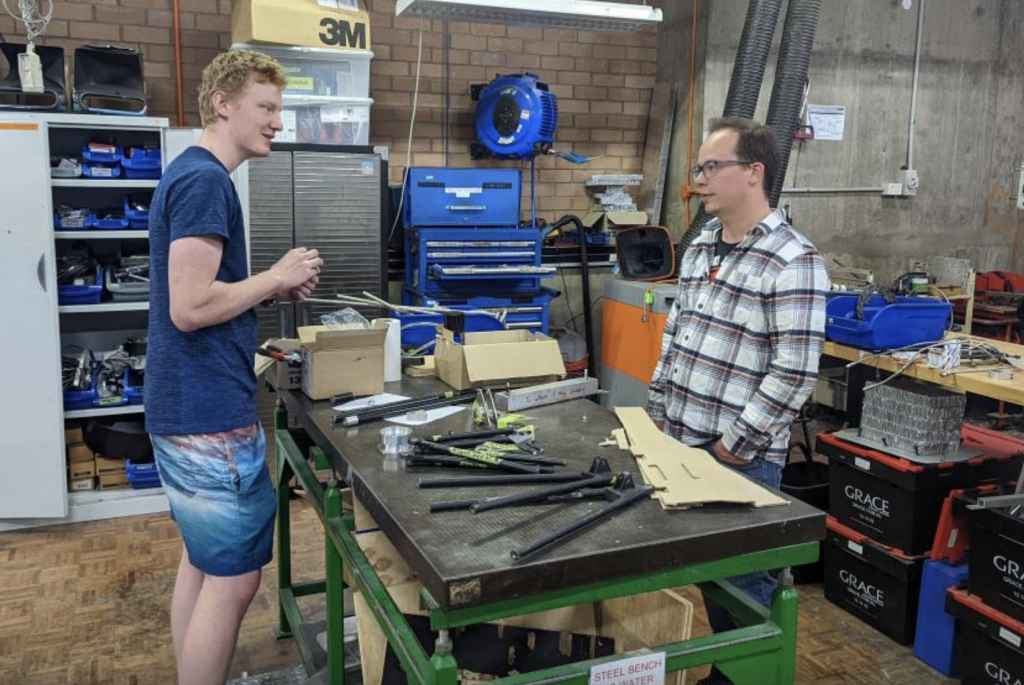 Just ahead of the car’s rear axle and behind the driver sits the “accumulator,” which is a lithium ion battery pack (shown below) made up of a bunch of 21700 lithium-ion cylindrical cells (the same ones used in many modern Teslas). The cells are air cooled via an electric fan, and arranged in a 128S4P configuration, meaning that there are four parallel sets of 128 cells wired in series, for a total of about 500 volts, and — if my calculations are right (and assuming a 3.7 nominal voltage for the cells) a total capacity of between 8kWh and 10kWh. 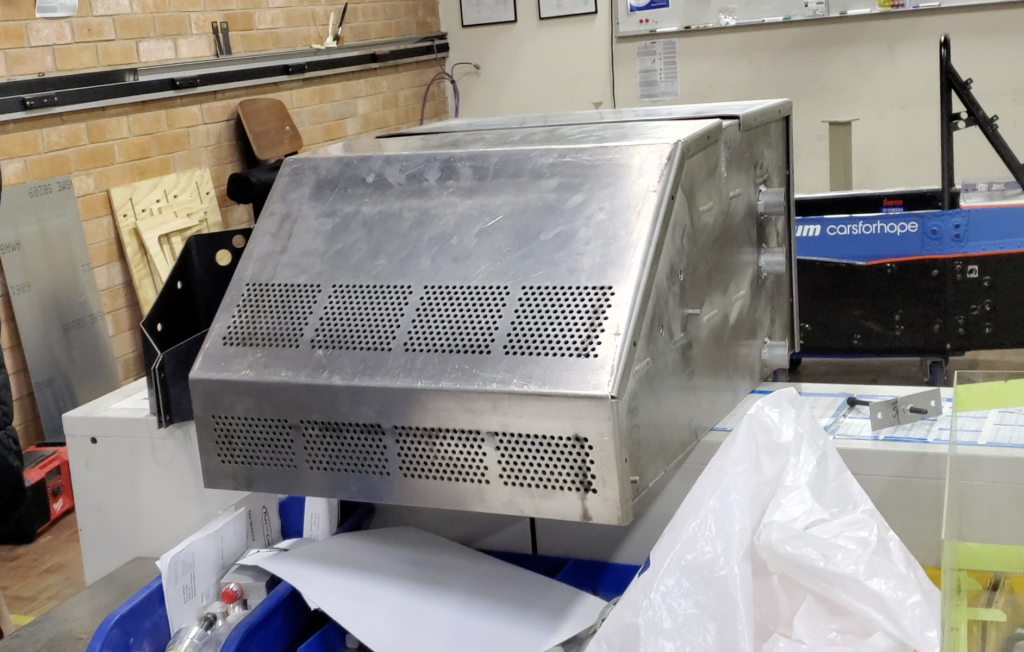 UTS’s electrical lead is a young student named Broughton. He walked me through his pack design, and I have to say: I was impressed by his knowledge, work ethic, and passion for what he was doing. 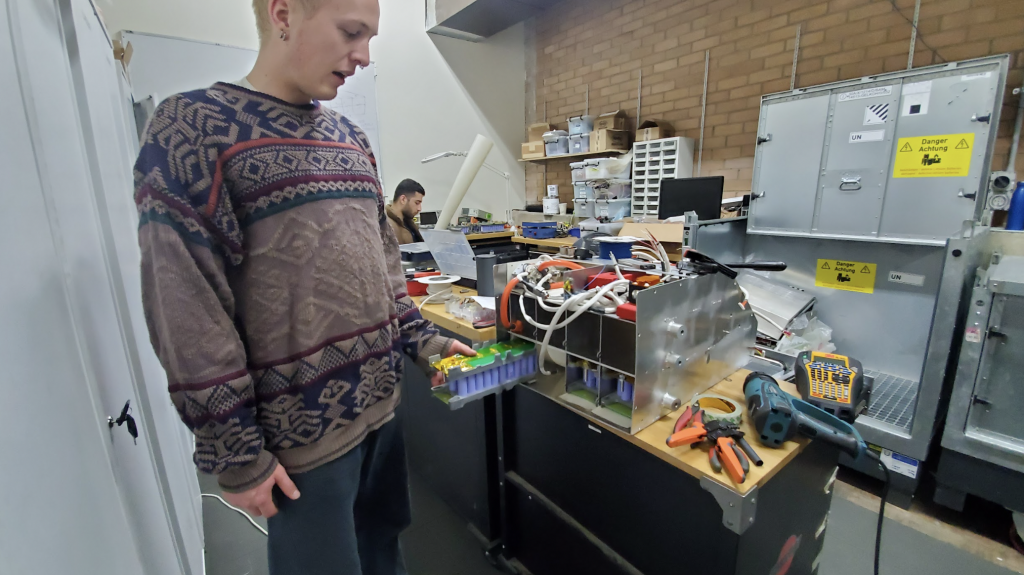 I mean, look at all the wires he had to individually crimp for the connectors plugged into the power electronics shown in the photo below!: 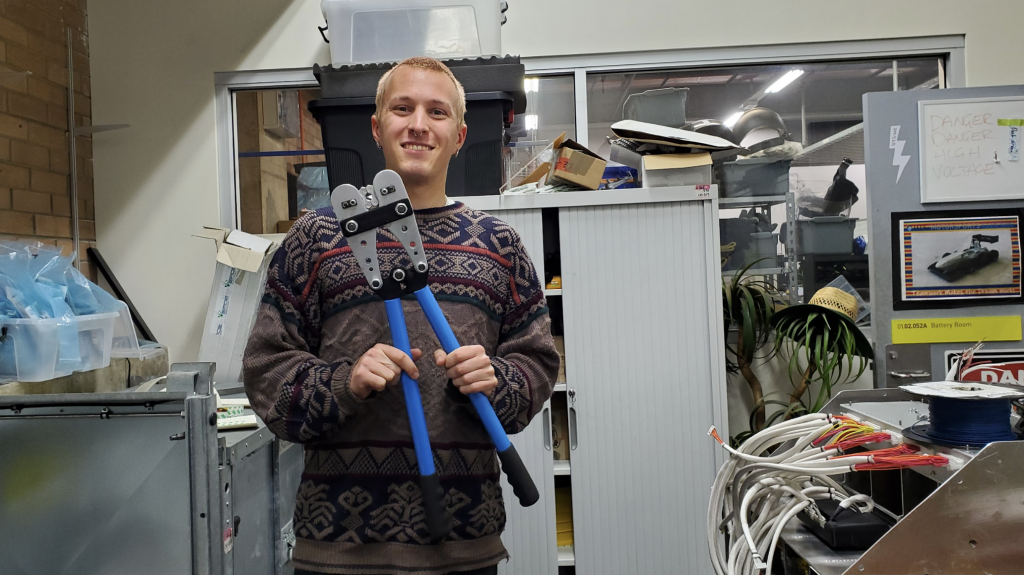 The group of us — me, Broughton, Bevan, Darren, David, Imraan — chatted for hours in that basement. We gasbagged about politics — I learned about Australia’s preferential voting system, I learned that voting is mandatory, I learned how Australia’s health care system works, we chatted about Oz’s gun laws, and we discussed jobs available for car-loving folks engineers now that the local auto industry has died. We even chin-wagged about the “Emu Wars,” which apparently involved Australia sending folks out to slaughter Emus, but ultimately wasting far too much money on an unsuccessful mission. The team laughed about how its country had lost a war against a bunch of tall birds. Of course, I learned some great slang, we commiserated about our COVID experiences, and ultimately we just had a good time as a group of folks who share the same two passions: cars and engineering.

There may have been a discussion about why Land Cruisers are more prevalent than Jeeps in Australia, and it’s possible the team claimed that the former are more reliable. I quickly moved on from this conversation.

Heading To Wrenchtown, Australia (AKA Dubbo) 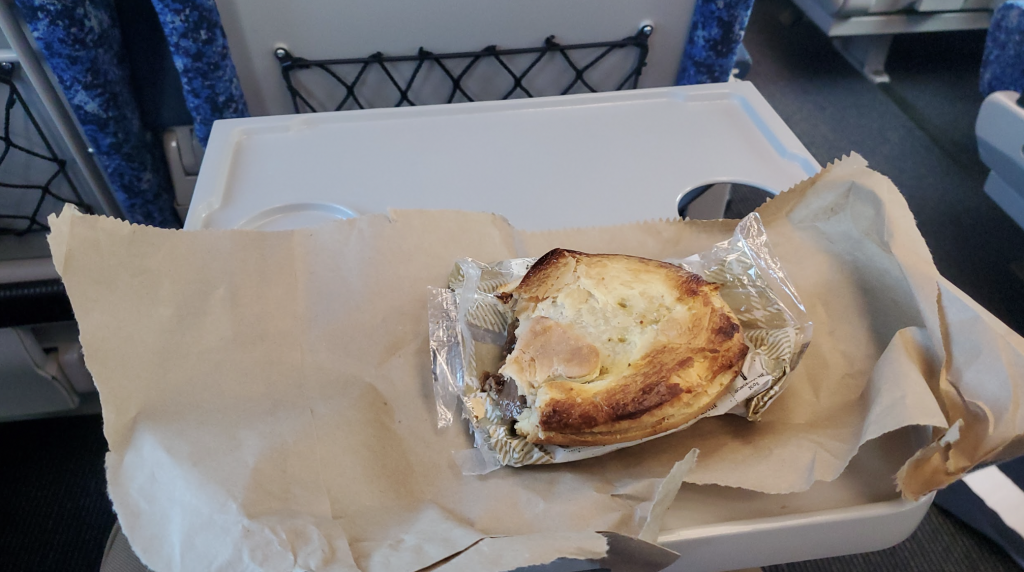 I left UTS after dark, headed back to my hotel near Sydney’s Central Train Station, snagged a Schnitty (a chicken Schnitzel; they’re the pub food over here, alongside the “Parmie,” or chicken parmegiana) from the bar, and went to bed. The following morning I dragged my tools and car parts to my  7:20 A.M. train. It was about seven hours to Dubbo; I worked, ate my first meat pie (see above), and looked out my window to see if I’d spot a kangaroo. 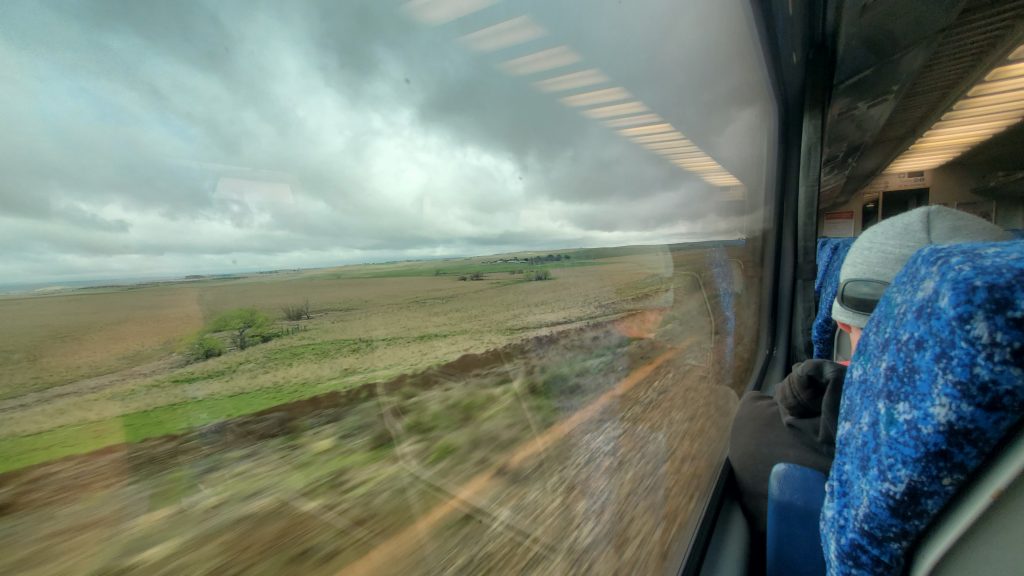 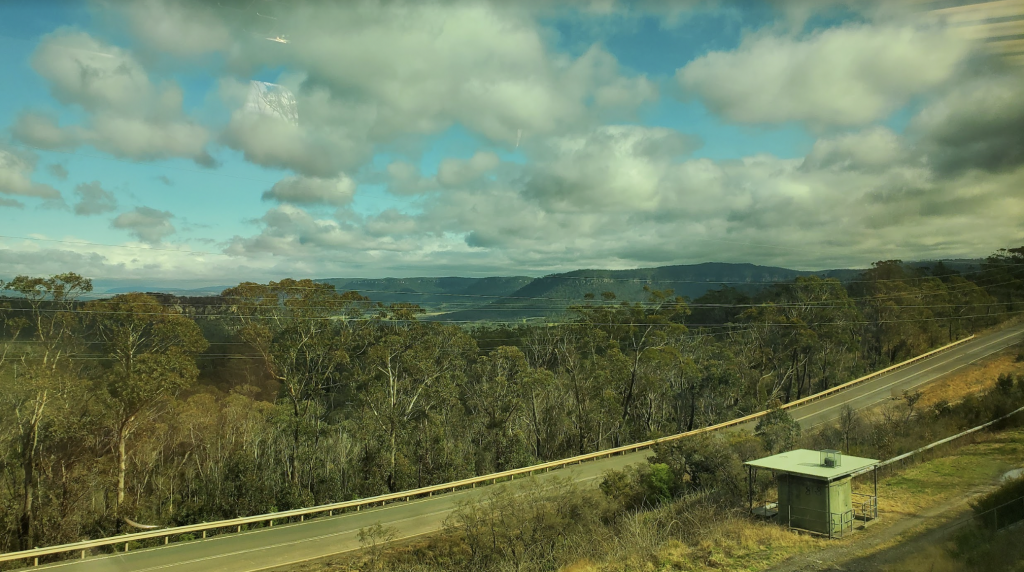 I did see a kangaroo, but I must say, it wasn’t’ the moment I thought it would be. I figured the clouds would open up and beam a spotlight onto my first wild kangaroo as a choir belted out into song. I expected a magical moment; these animals jump and have huge tails and carry their babies in pouches — it’s objectively bizarre! But then I saw a few in a field not far from the train tracks, and I barely even noticed. My brain registered them as deer. I had to do a double-take and then focus my eyes on the ‘roos before the gravity of the situation dawned on me. Kangaroos became even less interesting as time went on, since they’re truly everywhere, and frankly, a massive hazard when driving at night — so much so that they’ve created a humongous bull-bar culture here (I’ll talk more about that in a future article). 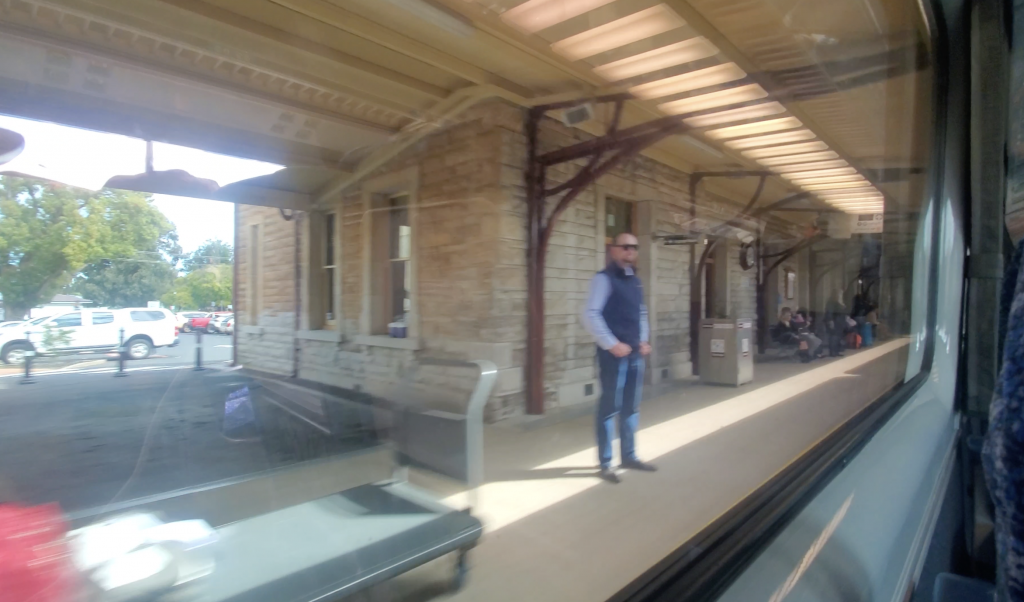 Anyway, my seven hours on the Wi-Fi and outlet-less train eventually concluded, and I arrived in Dubbo, where Autopian reader Laurence was ready to pick me up (that’s him above). As I would find, he’s friendly, incredibly passionate about cars, mechanically adept, not involved in the organ-harvesting trade, and extremely well connected in the local car community. That latter one is important (maybe slightly less so than the one before i t), because there’s no chance in hell that he and I will be able to get these two things on the road in four weeks without some beer and pizza-fueled friends working by our sides in the garage: 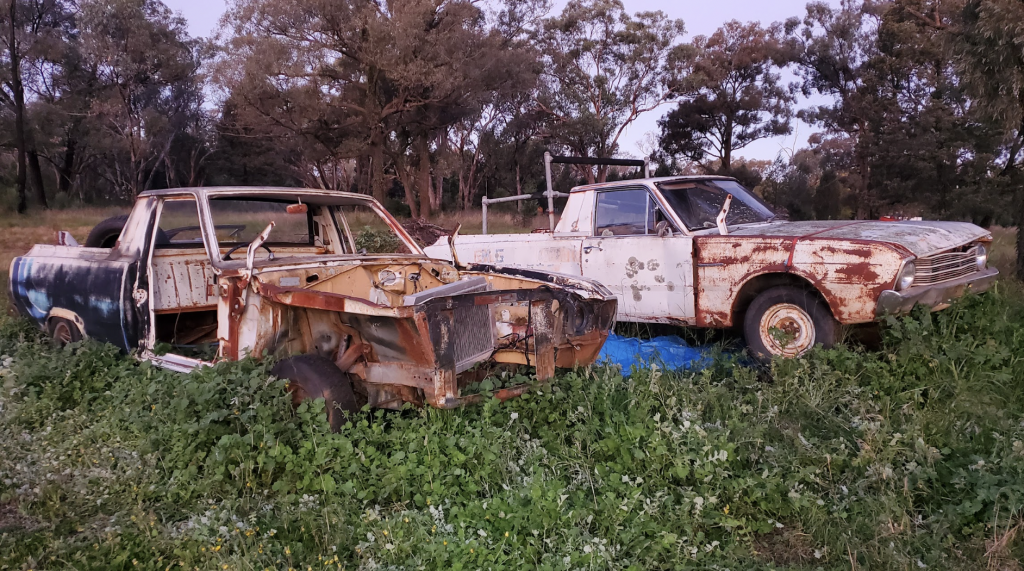 This is the first photo I took of the utes on Laurence’s mom’s property; we got there just a few hours after I arrived into town; the sun was starting to set, so I didn’t have time to take a close look. But I did a few days later, so you can expect a full rundown of the utes’ conditions soon. All I can say is this: Imagine hauling nearly 100 pounds of tools and car parts to the other side of the world — taking a 20-hour plane ride, then a bus from the airport to a train station, then a seven hour train ride out into the middle of bush country, only to arrive at a vehicle whose engine oil dipstick looks like this: 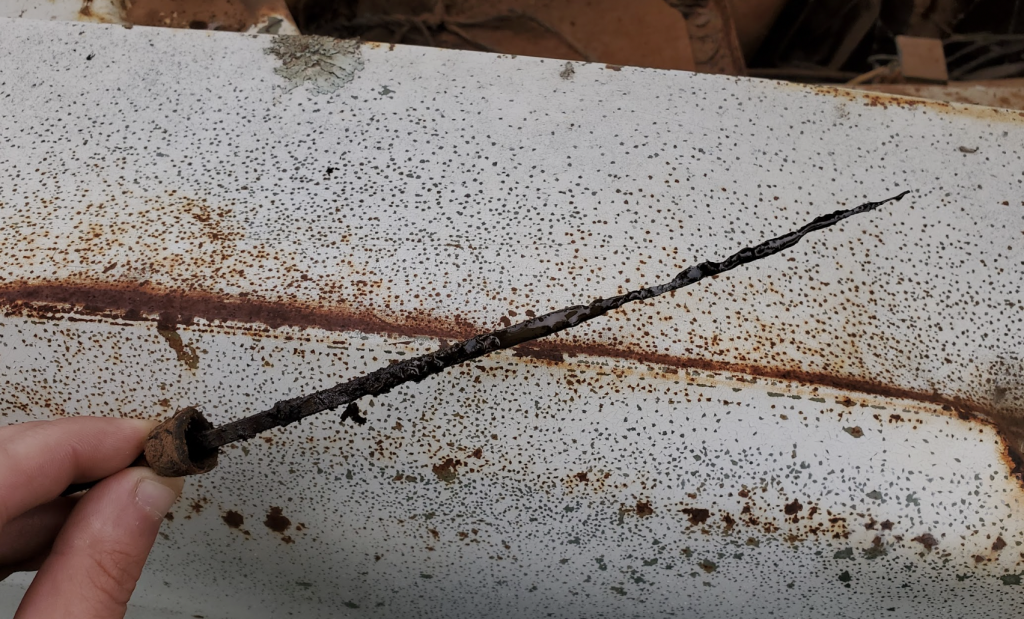 That dipstick is a good representation of the vehicle’s overall condition, which — to use Australian slang — is to say that it’s absolutely cactus.