If there’s one thing that I’ve learned traveling Europe in a diesel minivan, checking out abandoned cars in Hong Kong, and fixing a ute in Australia, it’s that the U.S.’s car culture is the “freest” on earth. People in every country I’ve visited have told me about how they wish they could modify their cars with whichever engines and suspension kits they like, not have to get their cars through strict inspections, not have to pay exorbitant taxes and fuel prices, and just generally do whatever the hell they want with their vehicles — like we do in the U.S.. Proof of this concept is right here: A top-heavy, narrow vehicle originally developed to drive 35 mph to neighborhoods and then stop every 12 feet to deliver mail is now outfitted with a ~285 horsepower V8 engine out of a Chevy truck.

As the former owner of a 1976 Jeep DJ-5D postal Jeep similar to this one, I can say with authority that the vehicle is absolutely not a suitable platform for any performance modification whatsoever. Essentially a two-wheel drive World War II Jeep with a shed on top, the basic chassis layout is deeply flawed from the factory thanks to that narrow frame, towering body, hilariously short wheelbase, and high-ground clearance suspension made up of spindly little leaf springs. My Jeep was powered by a 100-ish horsepower AMC 232 inline-six engine — a fantastic motor that ran beautifully during my epic 4,000+ mile trip from Detroit to and from Moab, Utah — and even it ended up in a junkyard a few days after I sold it. The new owner apparently found the vehicle too unwieldy, and crashed it. 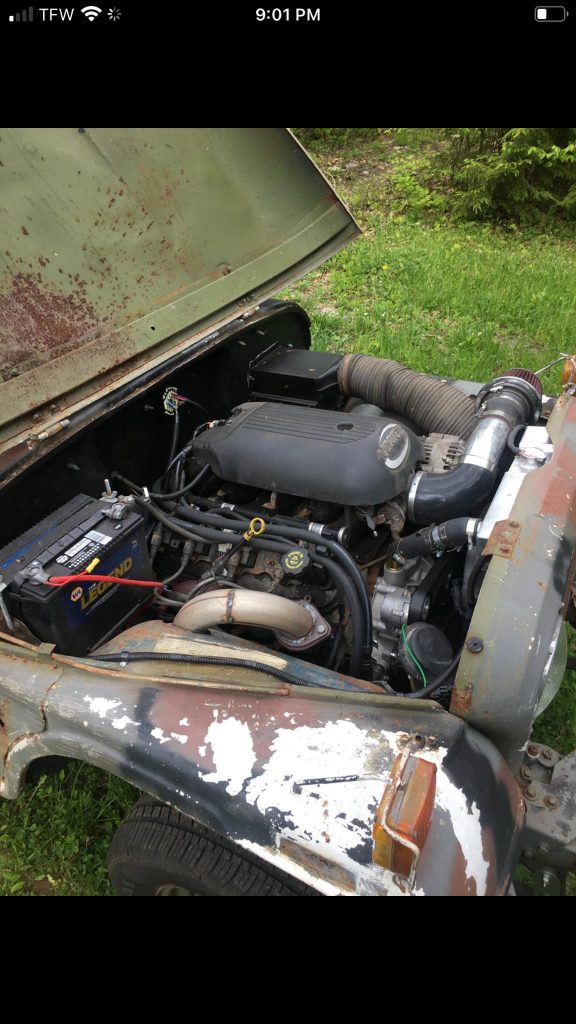 EV West, one of the largest EV conversion companies on earth, even built an electric version of the beloved Dispatcher, and — per my conversation with CEO Michael Bream (whom I visited a few months ago, and whom I’m planning to eventually write an article on) — that thing was an absolute deathtrap. Again, the tall body, narrow track, lack of sway bars, high ground clearance, heavy metal roof, short wheelbase — it all adds up to something that really should only be driven in a straight line and then gingerly babied around turns. Some have turned DJs into rock-crawlers, but with the inboard rear leaf springs, it’s pretty much mandatory that you make extensive modifications to the chassis before the DJ can be even remotely safe off-road. 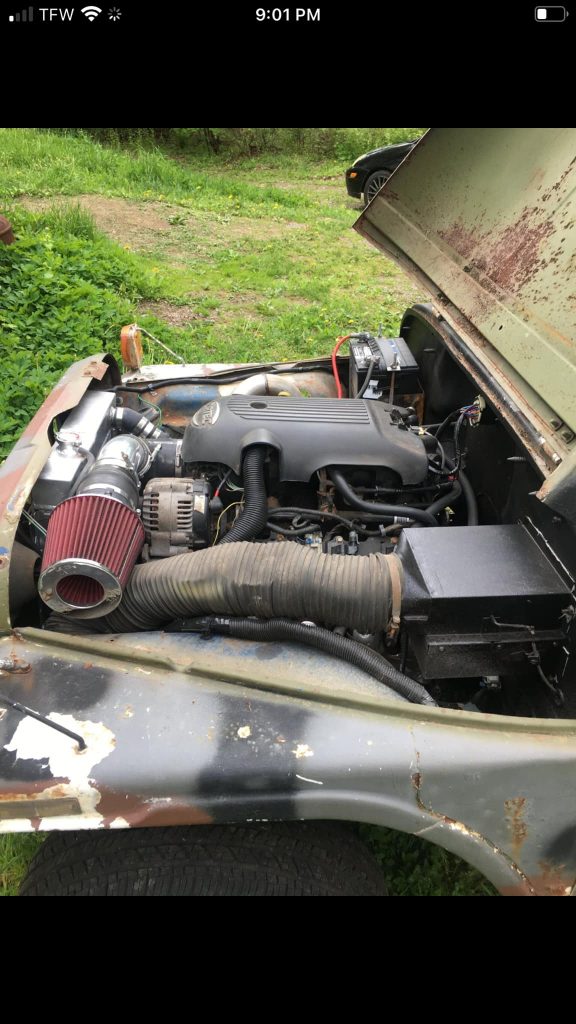 Honestly, the DJ may be among the worst platforms on which to base a performance-vehicle build. That’s a hot take not based in any fact, but you get the point: the DJ is fundamentally a compromise. To put a big V8 into this tippy vehicle with non-power drum brakes is so utterly absurd that I actually have to applaud it. I know, I know: Cars on the road should be safe and efficient. I agree, but in the hands of someone who understands its severe limitations, this machine is fun in much the same way as that motorized couch is. It’s something that should absolutely not be moving as fast as it is, and that’s what makes it so great. 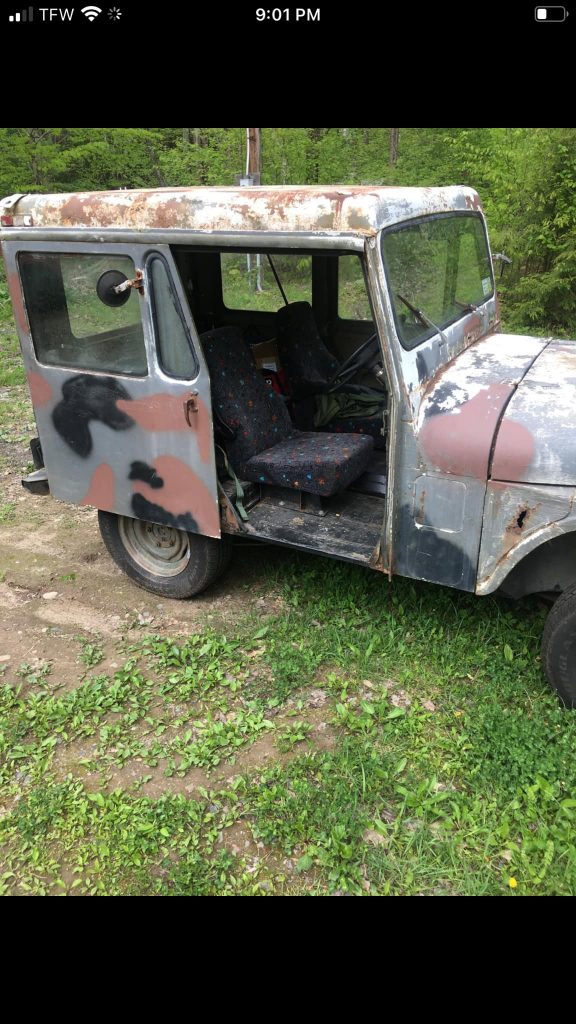 What I like most about this AM General machine is that it’s just a V8 in a Postal Jeep, and not a whole lot more. The suspension, steering, brakes (I don’t see a brake booster anywhere, so I assume the manual brake master cylinder is on the frame rail) — it looks fairly stock. The narrow axles look stock, the steering column and wheel are clearly stock, and hell — look at the rust hole and paint job. The fact that this person threw a V8 into this thing while keeping that paint job and the rust — it’s madness that I can’t help but applaud. This is a “sleeper” of epic proportions. 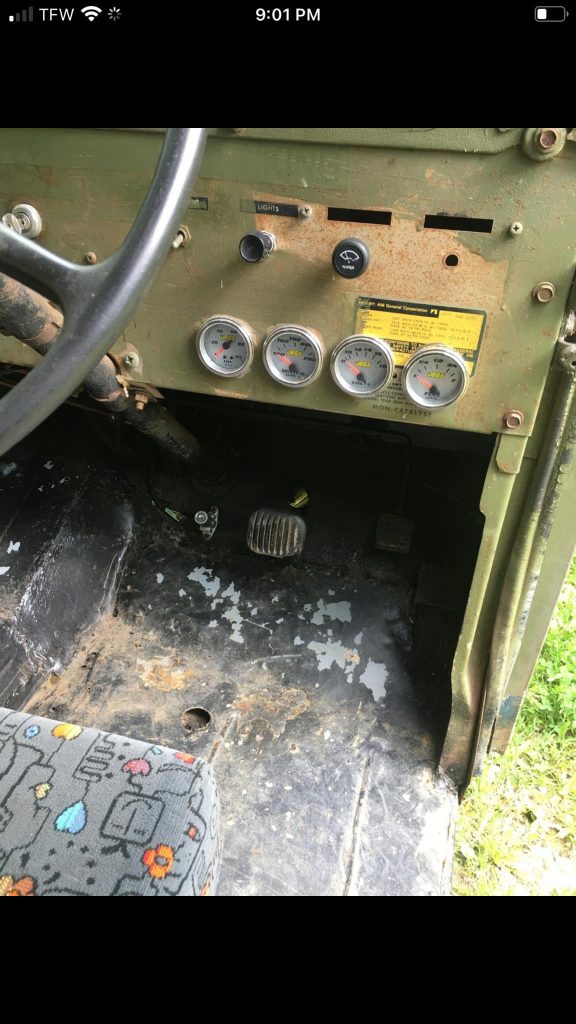 [Editor’s Note: Also, fantastic seat upholstery. – JT]
“I have a 1976 dj5 postal jeep. It is right hand drive. I did a Chevy LS swap. It’s a 4.8 with a th350 transmission,” begins the for sale-listing on Facebook. “Runs and drives great. Everything works except speedometer needs a cable. We took body off the frame and painted it. All new tires, brakes, wiring harness, every metal line and rubber hose is new. New radiator, water pump, gaskets, etc.”
The New York-based seller, Jeffrey Gough, concludes by saying he’s looking for $5,000 or a trade. I reached out to Gough to learn more about this build.
“I bought the Jeep and the army navy store in Gilboa,” he told me over Facebook Messenger after I’d asked what had given him the idea. “I’ve done a bunch of LS swaps on other cars I knew that’s what I wanted to put in this Jeep. Main reason why I bought it was because it was right hand drive and it had bullet holes lol.” When I asked if it’s scary to drive, he responded: “No it just took some getting used to, with steering wheel on the wrong side.”
The scary part of driving this Postal Jeep is the steering wheel being on the wrong side. What?
Anyway, I assume that 4.8-liter Chevy motor is a small-block out of a 2006-ish Chevy Silverado or Tahoe or something along those lines. If it makes anywhere close to the 285 ponies those vehicles made, then I’d love to see what a rip to 60mph looks like in this classic example of just how wild we car folks have it here in the U.S.