I think by now we’ve all glumly accepted that a good portion of our entertainment diet is made up of reconstituted ideas. I’m not saying this is necessarily a bad thing. Sometimes these old idea reboots work well, like that rebooted Battlestar Galactica did in the mid-2000s. Often, they’re just absolute garbage, like the Knight Rider (not to be confused with defunct media company Knight Ridder)  attempted reboot in 2008. NBC seems especially fond of these, and recently showed a trailer for their latest attempted reboot, this time based on the old Scott Bakula and Dean Stockwell-starring time travel show, Quantum Leap. The trailer seems fine for what it is, at least if you’re willing to ignore what may be the most ridiculously terrible attempt to show what a manual transmission looks like in all of modern television. It’s bad.

[ED Note: Battlestar Galactica was great for two seasons and then utterly jumped the shark, so I’m not sure I give it a full pass. – MH]

I was alerted to this nightmare via a tweet from Friend of The Autopian Charles Brand, but I don’t want to show you the tweet here, because it’ll be more fun if you watch the trailer first and can spot it for yourself. I’m pretty sure that if you’re on this site, you won’t be able to miss it:

Holy shit, right? What the hell is that?

Okay, in case you missed it, somehow, here’s a couple of screengrabs of the shifter as seen in the trailer, stitched together so the whole thing is visible: 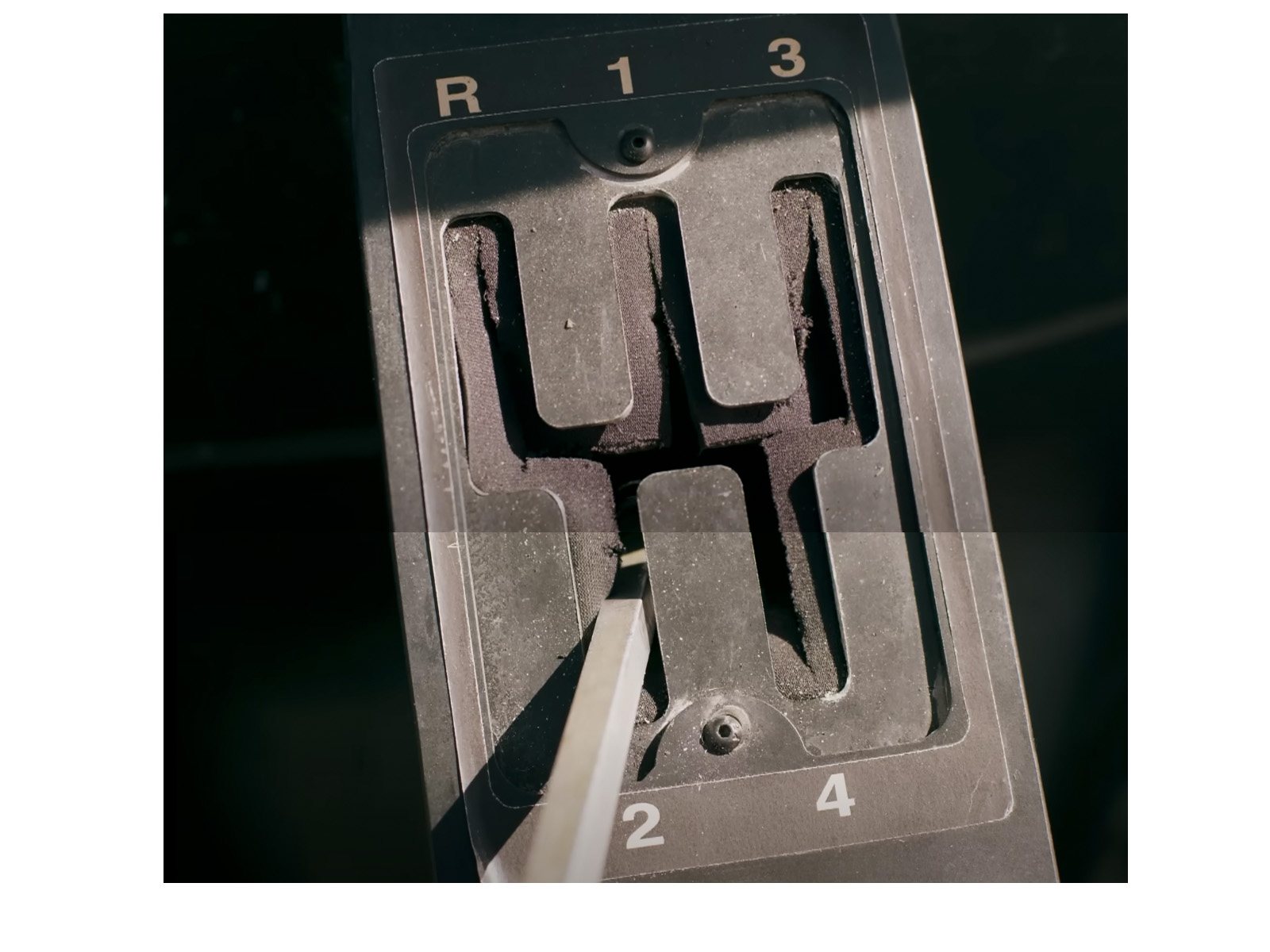 The fuck am I even looking at here? What has a shift pattern like that? The only car that comes to mind that used this sort of double-handled-trident shift pattern with a gate would be an oh, lemme think, oh yeah, a 1977 Imagino Unreal GT, an incredible, fast V7-powered grand tourer from fucking Narnia that doesn’t fucking exist, because nothing uses a shift pattern like this, especially a 1983 Ford Econoline as seen in that clip.

Sure, there’s cars with unusual shift patterns out there, like early Porsche 911 five-speeds with that dogleg first gear, or the crazy Citroën 2CV umbrella-handle shifter, but nothing like whatever the hell this is, which would require you to move the shifter down and to the left and then down again to go from first to second, an act as unfamiliar to human arms as feeding yourself with a hand that goes up and over your head and in front of your eyes.

Also, a square-section shift lever? Have you ever driven a car with one of those? Ever? Okay, maybe if you have a Peterbilt with an aftermarket shift lever, or some other aftermarket thing. But I’m still going to wager it’s nothing like what’s in that picture.

Just to put this all in context, the main character is someone that time-travels into the bodies of various people across time in order to right some sort of wrongs or get people to bone or stop historic missteps or whatever. In this trailer, it appears that the main guy has been sent to 1985. I know this because there’s a shot of a theater marquee that shows this: 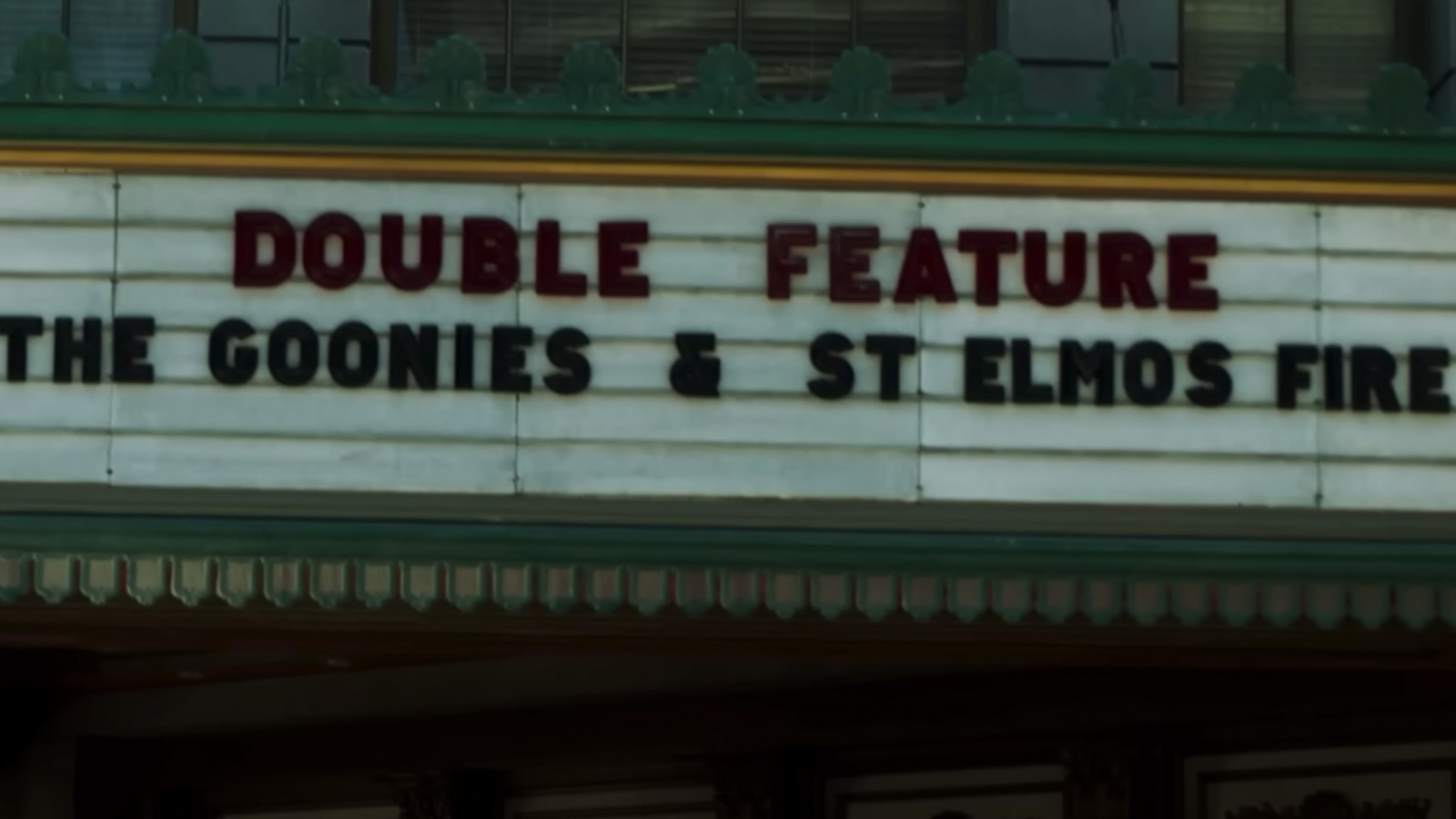 …and a quick Google search told me that both those films were released in June of 1985. Also, some other sign says so.

The van he’s time-teleported or whatever into is a 1983 or 1984 Ford Econoline, which I’m pretty sure of because 1983 was the first year Ford used the blue oval badge in the center of the grille instead of chrome F O R D letters on the hood. For reference, here’s the Econoline in the trailer: 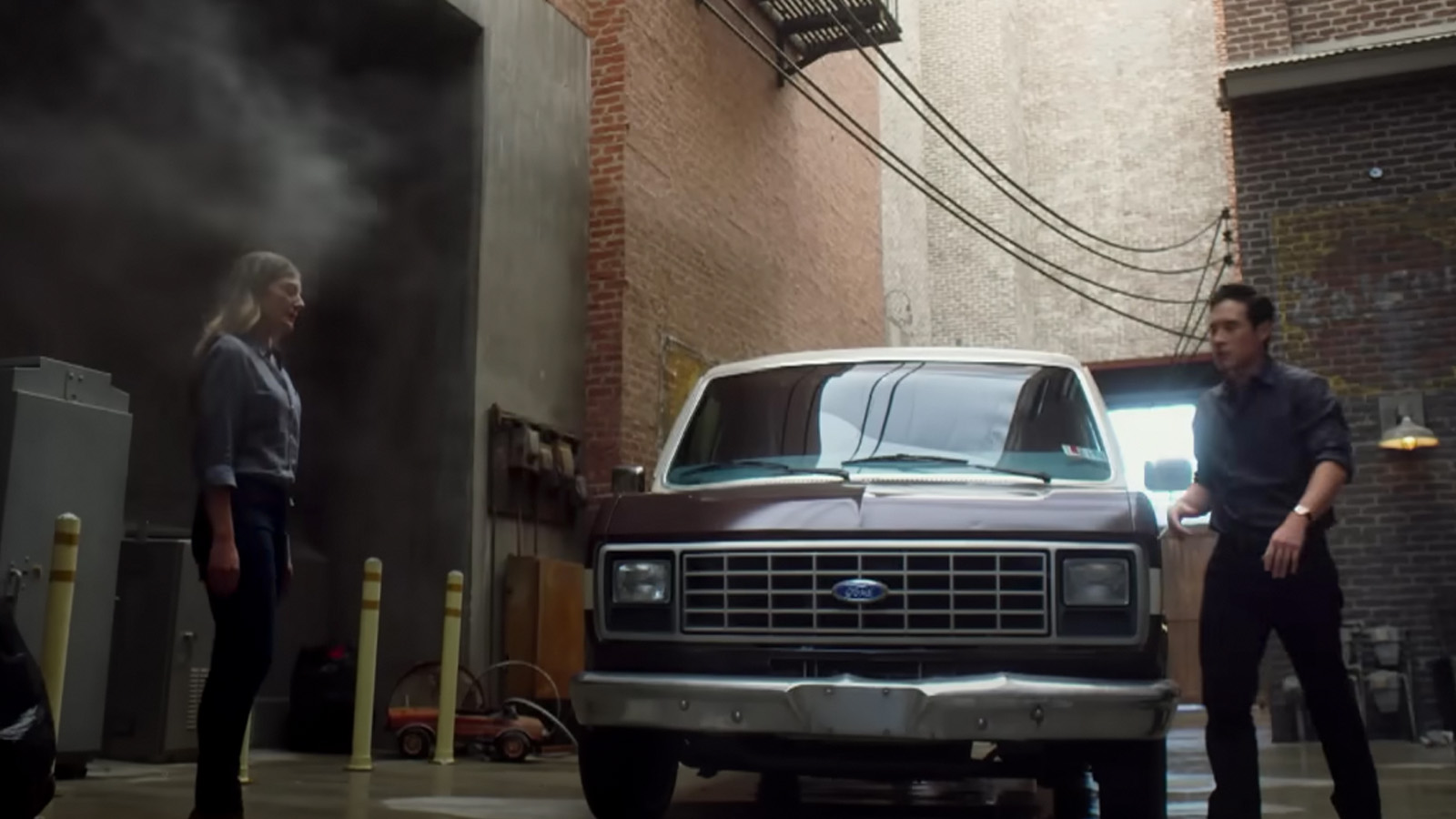 …and here’s a 1983 Econoline in Club Wagon trim, with a similar paint scheme to the van in the trailer: 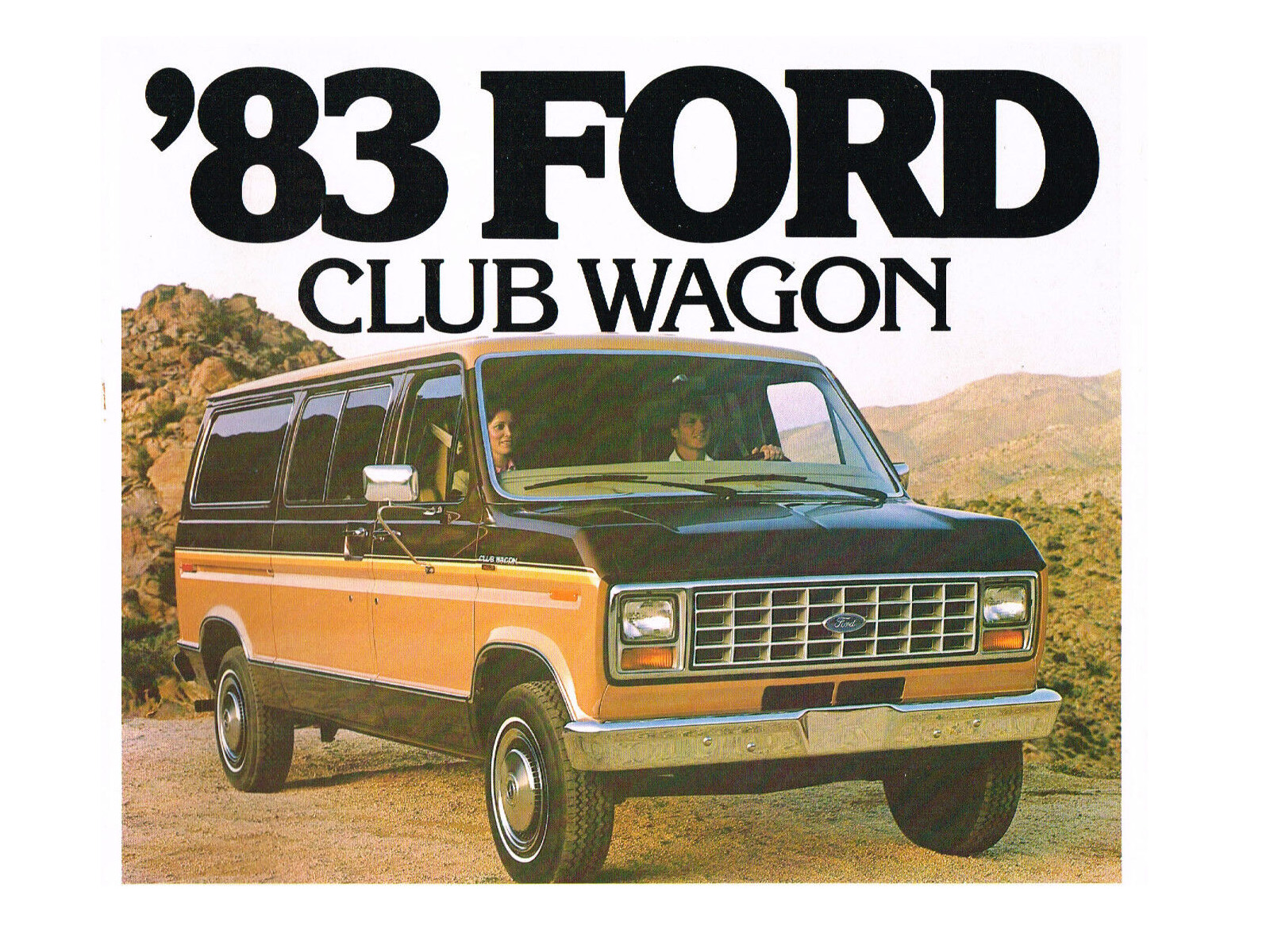 Now, a manual Econoline is a rare beast; the vast majority came with automatics, and a stick shift one is rare enough that I actually wrote about how shocked I was to see one for sale back in 2017. You’re statistically more likely to meet a glassblower who owns corgis and thinks you’re sexy than you are to encounter a manual Ford Econoline.

I guess part of the plot here is that the main scientist, who seems to be from our year of the lord 2022, goes back in time to the 1980s and, ha ha, he can’t drive stick, and yet he must, as he seems to have jumped into the body of a getaway driver behind the wheel of a vanishingly rare manual Econoline. So that’s why they had to make this Econoline into a manual. I get that. What I don’t get is why they prop team did it so badly. 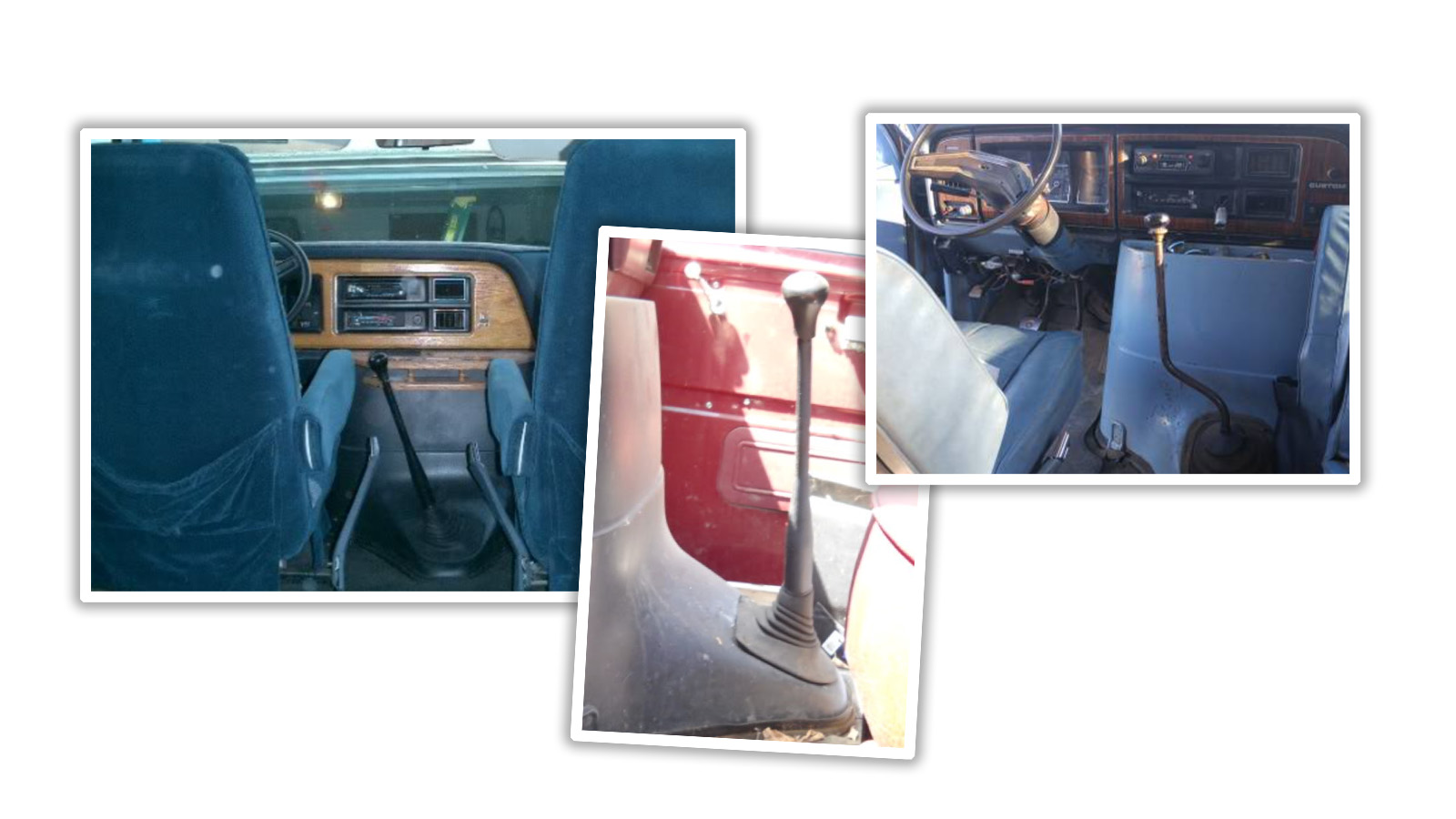 Whoever made this seems to have never actually seen a manual transmission, but perhaps had it described to them over the phone, poorly. And then they made more work for themselves. The shifter didn’t have to be gated, because not only is that more work, it’s the root cause of the problem here (that wildly implausible shift pattern), and no workhorse van has a gated shifter.

Why did they bother to make this thing at all? Why did they cut that plastic (maybe metal?) shift gate and make a sticker with the gear numbers on it and put a foam sheet inside it and screw on a bezel with hex-head screws and shove that square-section tube in there like it was a gearshift, when they could have taken a trip to a junkyard, gotten literally any manual transmission shifter from any car, and had that work a billion times better by just plopping it on the floor?

Or maybe they could have just picked some period-correct van that did have a manual shifter? How hard would it have been to get, say, a 1982 Volkswagen Vanagon, for example? Not hard at all. Plenty of those were manuals.

Let’s look at it again:

It makes no sense. It looks like absolute crap, it’s inaccurate to the point of distracting the viewer from the narrative and it was much, much more work than just yanking a real shifter from something.

I reached out to a friend who has done movie prop work, and she was baffled, too. The best answer she could give was that it may have been a last-minute, rush request, and the sloppy, inaccurate work was just the result of it being a rush job. Of course this happens sometimes, but for such a pivotal prop, one that gets some direct focus by the camera and attention, and is a crucial part of the plot, this seems like a huge oversight.

I mean, this same trailer has effects like this: 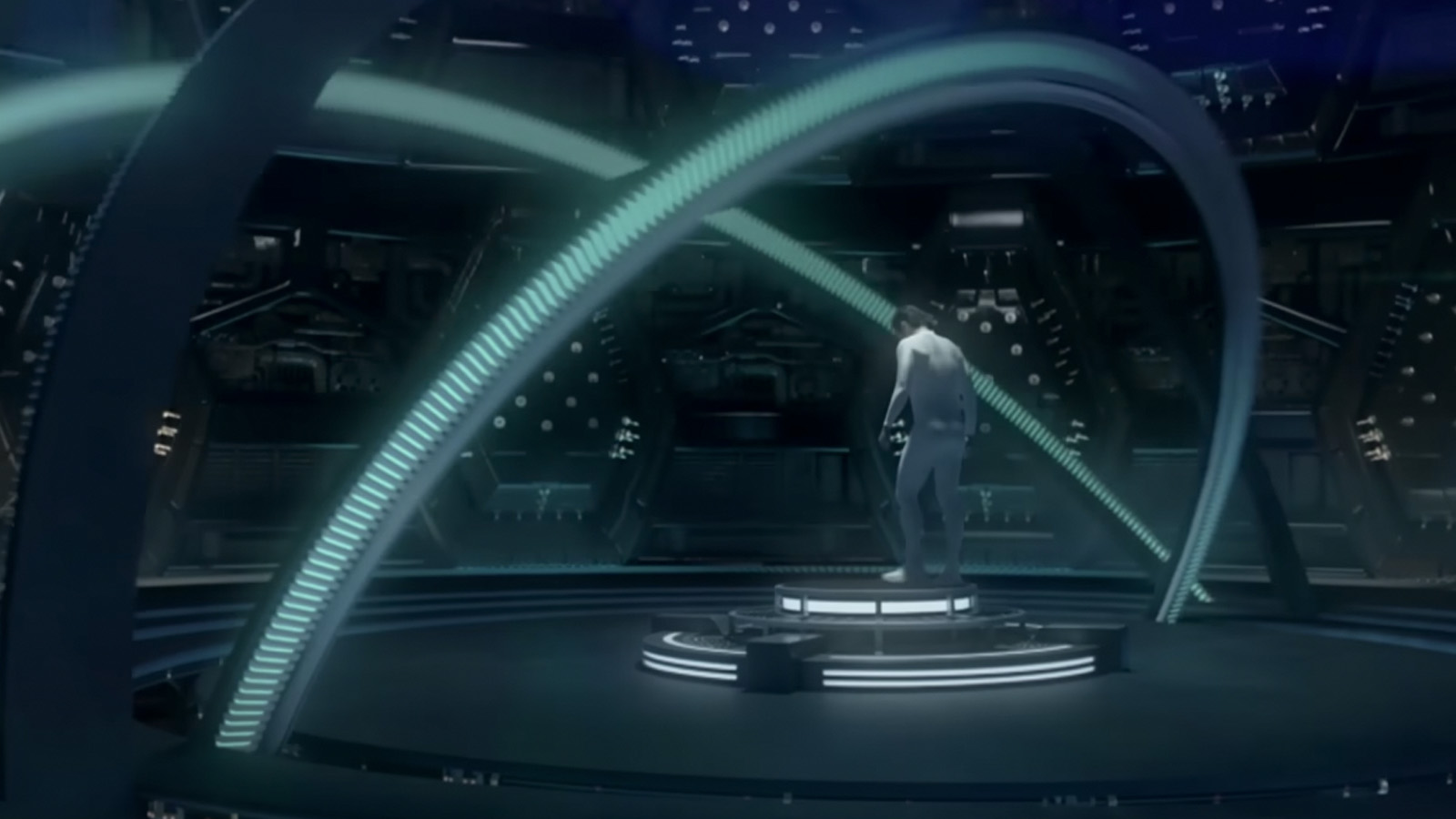 I’m certain the props team is more talented and capable than this fake shifter shows, but damn.

Nobody caught this in editing or review? How is that possible? Or, more likely, whoever was reviewing this footage either didn’t know what a manual shifter looked like themselves or just didn’t think it was a big deal, figuring it’s close enough, and who gives a shit? Everyone knows what it’s supposed to be, right?

Well, maybe, but there are those of us out there – not an insignificant number – who do know what a stick shift looks like. Saying something this obviously inaccurate is just fine would be like if the script called for a banana, and the props department delivered something that looked like this: 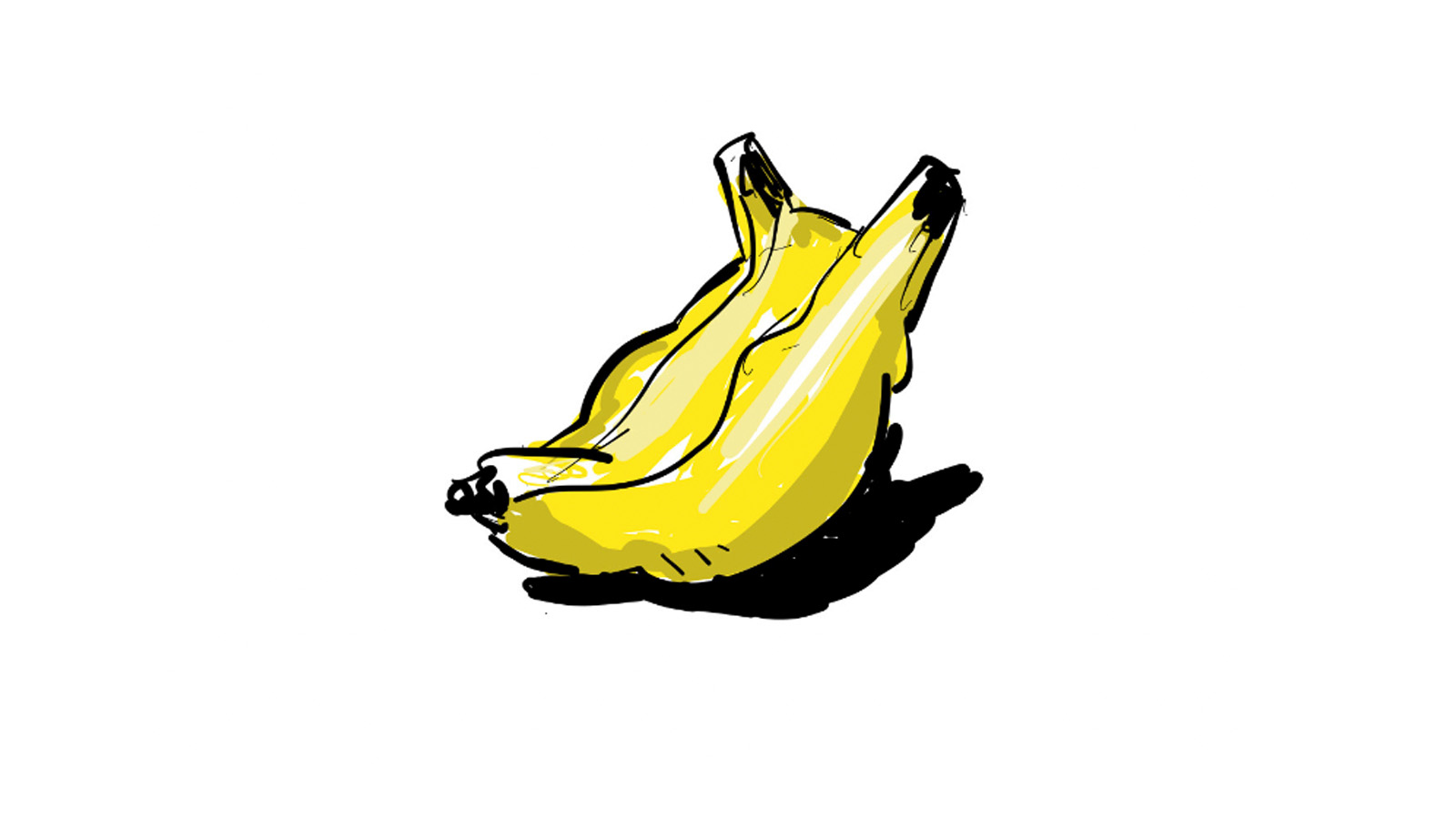 I mean, that’s basically like a banana, it’s generally the right color and texture and has some parts of the shape right, if not everything, but the viewer will know what you mean, right? Is that not close enough?

I think we all know it’s not close enough. Because while it may have some similarities, it’s not a fucking banana. Just like that shifter isn’t a fucking manual transmission shifter.

Details matter. Especially when there’s no reason for the details to be wrong in the first place. The way shifters look isn’t a secret, and real ones aren’t hard to find, after all.

Maybe there’s some complex plot point I’m missing here, like he was sent not just back in time, but they changed the premise of the show so he get sent into alternate universes, and this one is just like ours, except manual transmissions have awkward, stupid patterns and levers with corners.

If that’s the case, my apologies to everyone who worked on this production. You’ve done a bang-up job.

I'm a co-founder of the Autopian, the site you're on RIGHT NOW! I'm here to talk to you about taillights until you cry and beg me to stop, which I absolutely will not. Sorry. Hug? Also, David's friend.
Read All My Posts »
PrevPreviousMechanic’s Specials: 1990 Volkswagen Jetta vs 2002 Mazda Protegé 5
NextThis Junky Postal Jeep With A Chevy V8 Engine Is A Reminder That America Is The Wild West Of Car CultureNext