Facebook-f Twitter Instagram Rss
Menu
Menu
Home » Automotive Would You Rather: Rent Your Mouth To The Internet Or Teleport Your Urine?

Automotive Would You Rather: Rent Your Mouth To The Internet Or Teleport Your Urine? 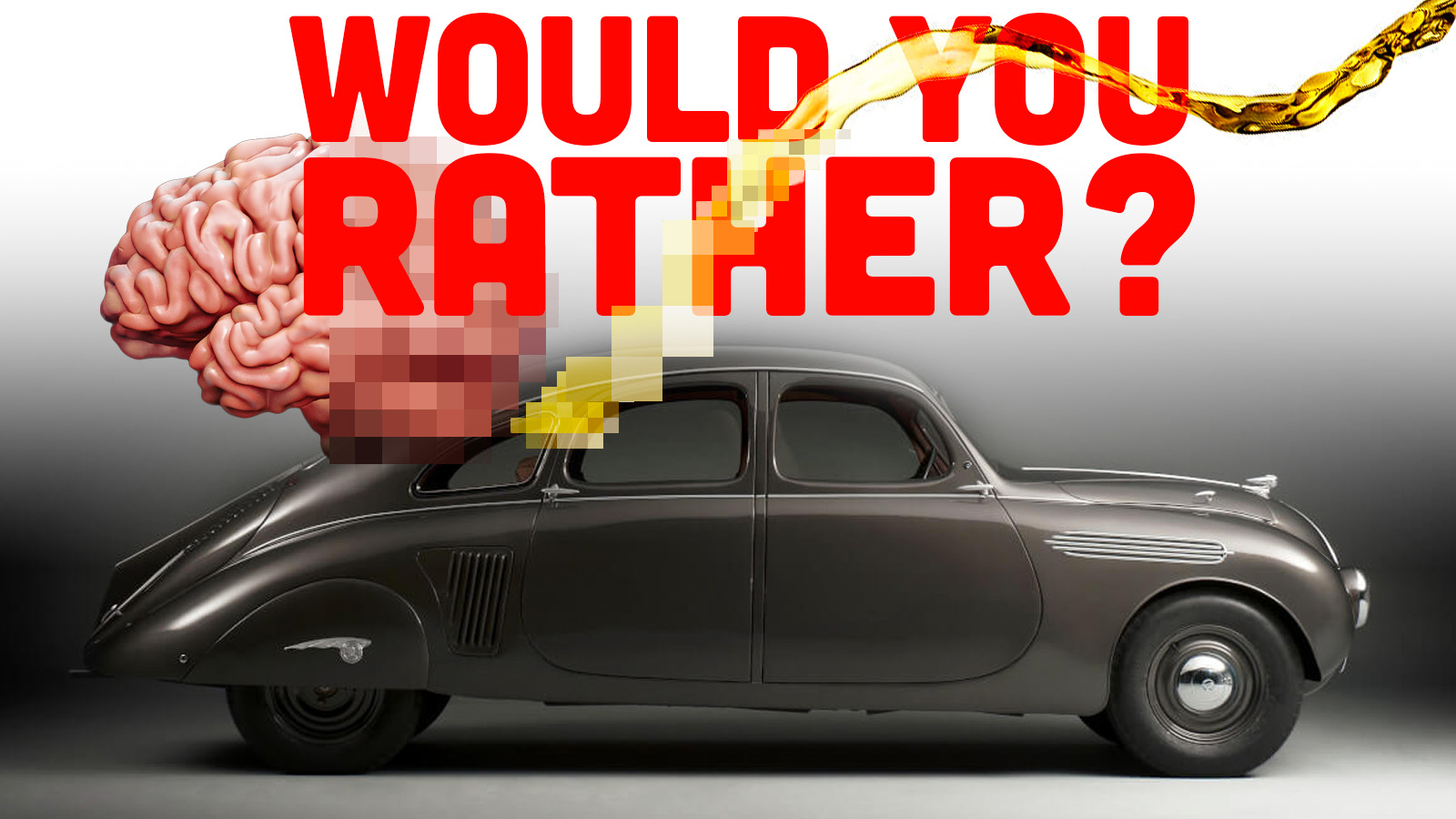 Man, it’s been a while since we had a good Would You Rather up in here, so let’s make that a solved problem, why not? After all, these are important! Your brain can’t just subsist on work and important things, like your body it also needs a healthy portion of serious crap. In the same way your doctor will want to be sure you’re getting enough piping hot Yoo-Hoo and Fritos in your diet, your therapist will want to be sure you’re getting enough ethical and emotional challenges from a handcrafted Autopian Would You Rather. So here we go: today’s will focus two bold new business ventures, both of which reward you with cars, but at a price.

Your childhood friend has become a multi-millionaire, thanks to a lot of capital he got of a healthy payout from both Kraft Foods and Prestige Brands, maker of the cleaner known as Comet, because the similarities of their shiny green cylinders caused unfortunate consequences for both dinner and toilet cleaning when he was in middle school. You know, like this: 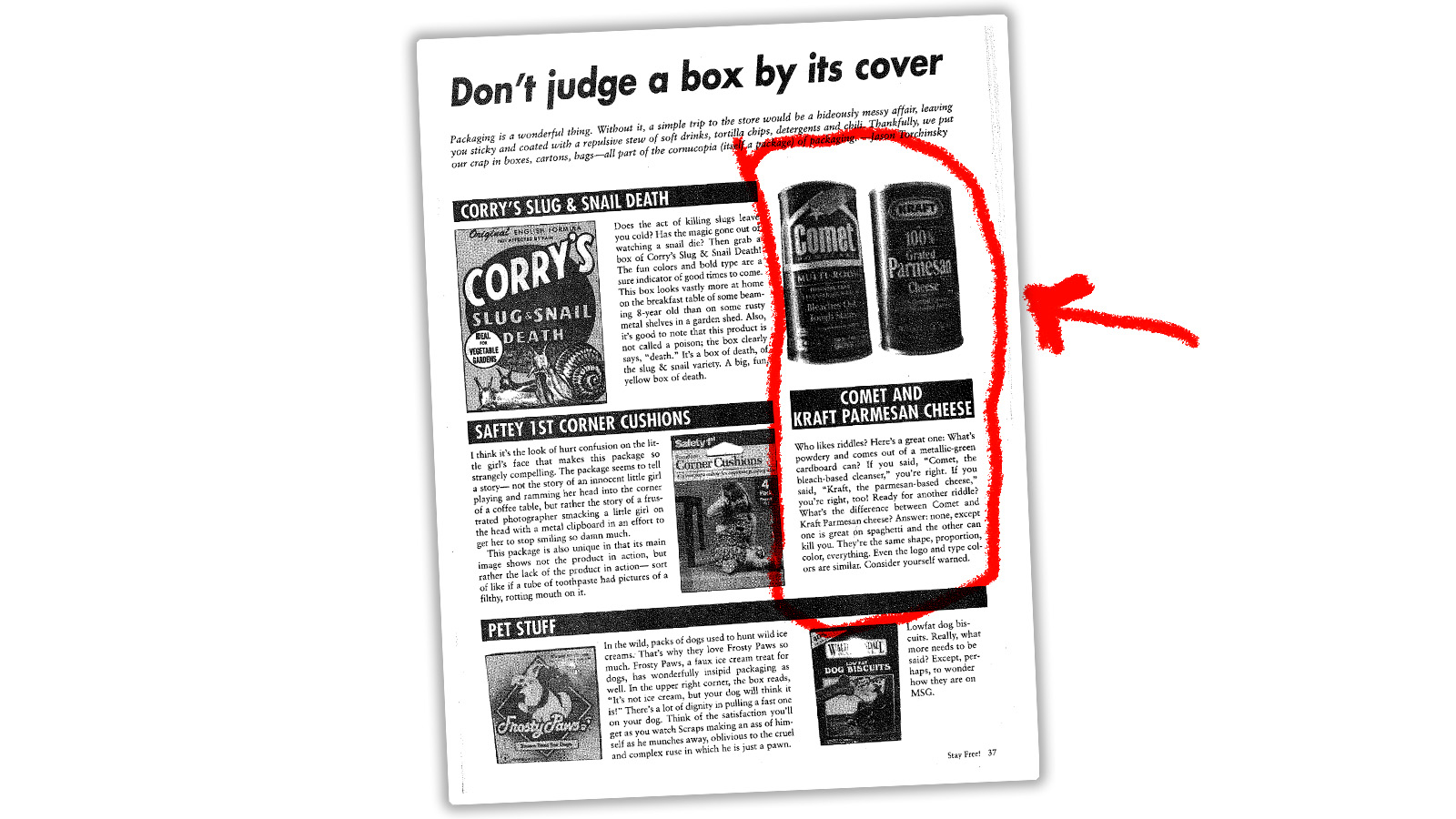 Anyway, he invested the payout money into a variety of enterprises that paid handsomely over the years, including developing the world’s best-selling brand of ham repellent. I don’t need to say the name, but I bet it’s the kind you have in your closet right now. He’s currently starting a tech startup that has some really incredible breakout technologies and he very much needs to test them.

For extremely complex legal reasons that result in him being on both house arrest and having to wear an alarm that blasts if he gets within 100 feet of an ant farm, he’s not allowed to use currency as we understand it, so he can’t just hire testers. He knows you’re a lifelong gearhead, so he’s got a plan.

He will use his vast company resources to get you any car you want, maintained by a professional staff. If you want the only Skoda 935 Dynamic that exists in the world, it’s yours. They’ll figure out how to get it to you, just don’t ask questions. If you decide next month you want a different car, they can do that, too! You can change cars every month, and they can be literally anything you want.

Of course, there’s a price. In return for this bit of automotive Nirvana, you can pick between two revolutionary new technological developments to test. Here they are:

Your friend’s company has developed a neural implant that will allow text to be sent from anywhere on the internet direct to your brain, at which point you will stop whatever you are doing, stare blankly, and speak those words in your own voice, loudly and clearly.

To test this, they need you to get the implant, and be ready to receive the text signals up to two days a week, with a variable number of individual sessions per day. The sources of the text will be from literally anywhere on the internet, from Reddit forums or Facebook or kink-friendly dating apps or Twitch chats or Tweets or wherever. TikTok, too. Anywhere. Most will be in the context of actual people typing in messages to send, but there will be some AI text as well, and text randomly sampled from the internet.

The signals will be unannounced, and the amount of text you’ll be speaking is likely pretty short, but could potentially last up to 47 seconds of speech. You’ll be aware and alert while it happens, but powerless to stop speaking until the signal ends.

If the speaking some rando’s words from the internet makes you uneasy, there’s another option. This time you’re not receiving anything: you’re sending something. Specifically, urine. You see, your friend has developed a sort of teleportation system designed specifically to teleport your urine into someone else’s bladder, for getting around drug testing.

To make this happen, you’ll need to wear a special catheter unit in your urethra – there are versions for whatever equipment you’re running down there – and you’ll need to be ready to pee a good quantity of urine with minimal notice.

When your urine is needed, the catheter-teleporter unit will buzz loudly (or, if on silent mode, deliver a series of electrical shocks) and you will need to immediately find a location to urinate. You’ll have a window of about five minutes, and then the unit will activate, and start to teleport the urine flowing through your urethra into the remote bladder.

Due to the power required to run this, you’ll need to keep a lithium-ion battery belt on and charged, and you will feel a good amount of discomfort as the process happens, along with a loud crackling sound and some sparking. Estrogen or testosterone or other compounds may be injected into the flow based on the needs and criteria of the client.

The process can happen at pretty much any time, day or night (it’s global, you see) but it’ll be limited to no more than seven times per 24 hour period.

So, what’s it gonna be? You can have all the incredible cars of your dreams, and all you have to do is test some revolutionary tech! Sure, your life may end up a shambles as a result, but it could be a shambles in a Facel-Vega or Bugatti!

I'm a co-founder of the Autopian, the site you're on RIGHT NOW! I'm here to talk to you about taillights until you cry and beg me to stop, which I absolutely will not. Sorry. Hug? Also, David's friend.
Read All My Posts »
PrevPreviousBruce Meyer — The Ultimate Car Guy — Tells Some Incredible Stories On This Week’s Autopian Podcast
NextRemember When Automakers Offered Many Different Body Styles Of The Same Car? COTDNext