Automotive Would You Rather: Traffic Imperviousness Or Pound Cake Sculpture? 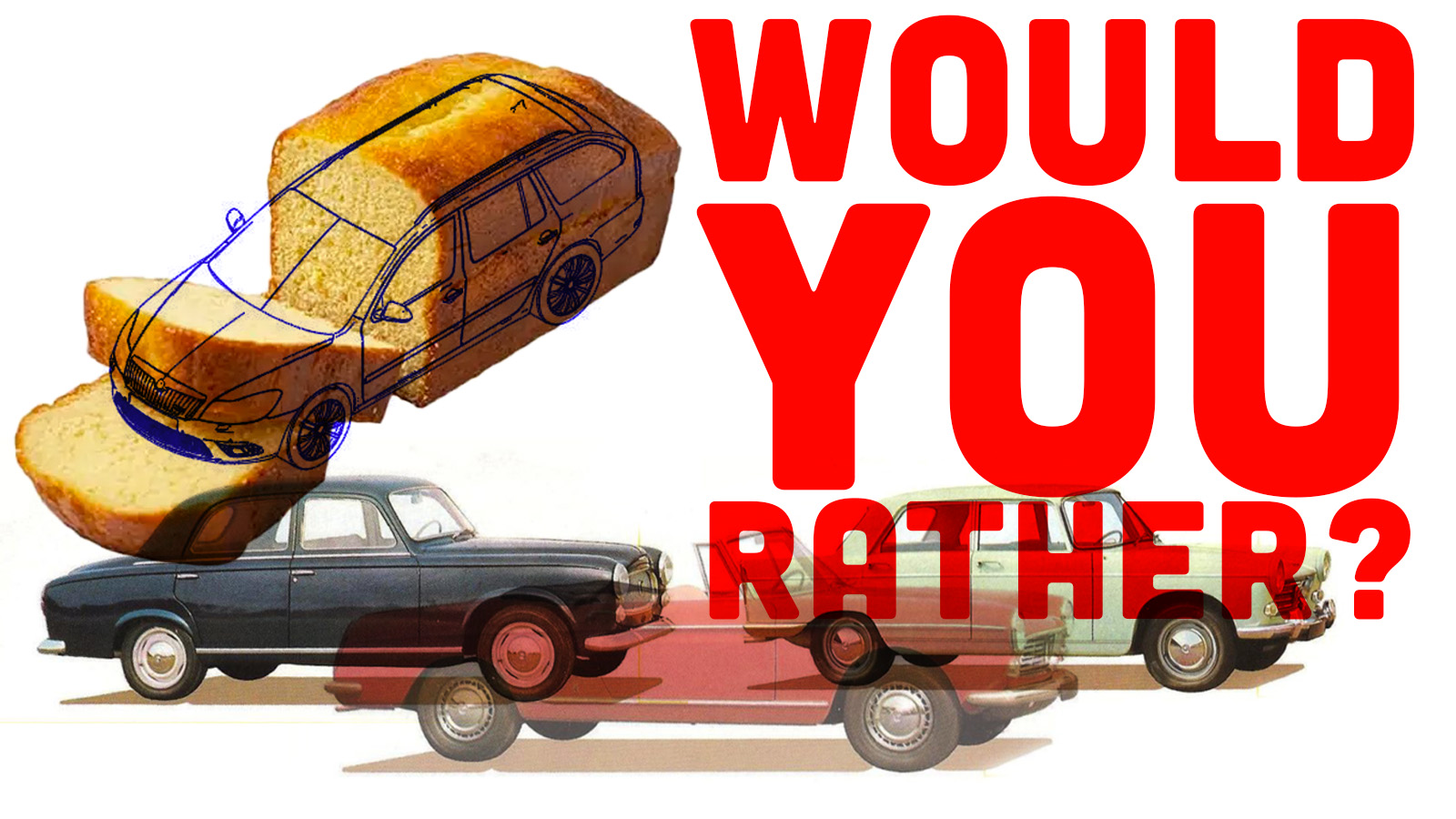 Okay, I didn’t quite manage to get an Automotive Would You Rather last week, but I sort of made a half-hearted promise to a child to do these, so I’m determined to get one done this week, even though I’ve been swamped editing and podcasting and other crap today. But I don’t care, we’re going to do this! Are you feeling ready? Is your cerebrum all lubed up and well-massaged? I don’t want anyone to pull a brain lobe, because I don’t want to be responsible for anyone not being able to conjugate verbs or whatever. All good? Off we go.

You have a friend who works at a particle accelerator, and she invites you over for a tour of the facility. She shows you around the huge ring of the accelerator, and then takes you into her lab, which has a smaller cyclotron whirring away in it. She seizes you by the arm and tells you that she’s on the verge of an incredible discovery, but she needs your help.

She’s found a way, by manipulating the flavor of the quarks in matter or something you didn’t quite catch, where she can adjust the “phase” of matter, to the point where she can selectively cause physical objects to pass through one another. Her eyes are wild and flashing, and you can tell she’s deadly serious about this.

She presses something into your hand. “It’s a suppository,” she says, making you cringe a bit, but she presses on.

She tells you that when you have that suppository in your rectum, you can give it a voice command and it will adjust the flavors of the quarks in anything in direct contact with you so that you can pass through other matter.

You remind her to say it, don’t spray it, but she doesn’t listen. She tells you that in order to keep you from just passing through the surface of the Earth, she had to limit its use to a specific set of parameters, and knowing you like she does, she tweaked it so it can only work when you’re driving, where you can use it to pass through traffic like it just didn’t exist. Because you hate traffic.

However, there’s a catch: Nature, she explains, always balances her books. And, the frustration that you feel in traffic is a known and quantitative sort of energy, known by scientists as frustrationic energy. So, it has to be replaced, somehow.

As a result, for any given amount of time you spend being frustrated in traffic, you need to have an equal amount of frustration energy to replace it. In order to keep things favorable for you from a time standpoint, she has arranged for the most annoying, irritating, smug, biggest assholes she could find to lecture or yell at you once a week to compensate for the frustration you saved by being immune to traffic. By having you encounter colossal assholes, it’ll take less time, because they’ll be so fucking frustrating to listen to. She figures an hour of traffic is equivalent to 15 minutes of listening to some asshole, so it’s about 25% of the traffic time, translated into asshole time.

She already booked Ben Shapiro for a six-month gig lecturing you!

You show up to your local Cars and Coffee, wishing you had a really cool car to bring, when you see someone with something amazing: An Iso Grifo. It’s a really unusual car to show up at your little car meetup, so you strike up a conversation with the owner. He’s a very cool guy, and tells you he has a massive car collection, and is always on the lookout for new cars to buy. In fact, he continues, he has a sort of special club for people, like yourself, with highly discerning car tastes and interests.

You’re interested, of course, because the club sounds incredible. In fact, he lets you know that his club does something special that could even result in you owning pretty much any car you’ve ever wanted!

His intensity is scaring you a little bit at this point, as his eyes are wide, glistening with excitement. He tells you that, yes, he has a sort of kink, one shared with his club of wealthy car collectors. It’s harmless, really, and if you play along, you can have any car you’d like from his or any of the collections of the other club members, or, if they don’t have it, they’ll buy it for you.

You just have to do one thing: Sculpt a rectangular pound cake into a recognizable shape of a particular car using only your mouth. In front of everyone.

That’s right: if you can bite, chew, lick, nibble or whatever a dense, tasty poundcake into a car that is identifiable (and approved) by at least 85% of the members of the club, then you will be presented with the car you represented via pound cake. If not, then you have to eat six entire pound cakes in front of everyone.

Keep in mind nothing is stopping you from practicing at home! And if you want a VW Microbus you’re already halfway there before you take a bite! Though they may demand more detail for that one, because, you know, they kind of get off on this.

So, what Would You Rather? Be able to drive right through traffic any time you want, at the cost of having to listen to an asshole rant bullshit at you, or would you be willing to try to chew a poundcake into your dream car, in front of a bunch of rich weirdos, and if you fail you’ll have to eat way, way too much pound cake? Choose wisely!

I'm a co-founder of the Autopian, the site you're on RIGHT NOW! I'm here to talk to you about taillights until you cry and beg me to stop, which I absolutely will not. Sorry. Hug? Also, David's friend.
Read All My Posts »
PrevPreviousHere’s What It Cost To Drive A Dirty Diesel 760 Miles Vs An EV 500 Miles
NextThe Dodge Charger Daytona SRT EV Concept Looks Surprisingly Production-LikeNext